Borussia Mönchengladbach: Are they ready for Europe? – data analysis

In the entire history of Borussia Mönchengladbach, their top stars have always been bought away at the end of great seasons. Whether Granit Xhaka (2017 for 42 million to Arsenal FC), Thorgan Hazard (2019 for 27 million to BVB), Marc-André ter Stegen (2015 for 17 million to Barcelona) or Marco Reus (2013 for 17.5 million to Dortmund) – the club had to start over again and again.

Those times are over, aren’t they? One thing is clear at the moment: Manager Max Eberl (46) has promised his coach Marco Rose (43) and all Gladbach fans that not a single top star will be sold this time after reaching the premier class. Eberl named the internationally highly sought-after Denis Zakaria (23), Matthias Ginter (26), Alassane Plea (27), Marcus Thuram (23) and Nico Elvedi (23) as examples.

Eberl: “I consciously mention the high price of 120 million, which hardly anyone would pay in Corona times. But if something like that happened, then, of course, I would think about it. But I’m glad that there have been requests and interests regarding our players so far – but no specific offer. Because we communicated very clearly and consistently that we do not want to sell. We want to stabilize ourselves at the current level with this high-quality squad!” That means: to play again for Europe and also to mix really well in the Champions League!

The manager also explains why there were no expensive acquisitions this summer, but “only” two loan contracts with Hannes Wolf (21, RB Leipzig) and Valentino Lazaro (24, Inter Milan): “It’s about credibility over my team. On the one hand, we cannot accept a four-month wage waiver by the players during the Corona period in order not to have to dismiss employees at the office. And then, on the other hand, spend millions on transfers.”

In this data analysis, we will take a closer look at Gladbach’s squad, their players’ data and statistics. Furthermore, this analysis will provide you with Gladbach’s playing style.

Before we check the specific positions in detail, we need to take a look at Gladbach’s squad width. As we can see in the image below, they have 32 players in their official squad for next season. It is outstanding, that they have a high amount of right-backs and strikers. On the other hand, there are not that many players available to play on the wings. Only three wingers are in the current squad. Adding to that, they have a very balanced midfield with four defensive and four offensive midfielders. 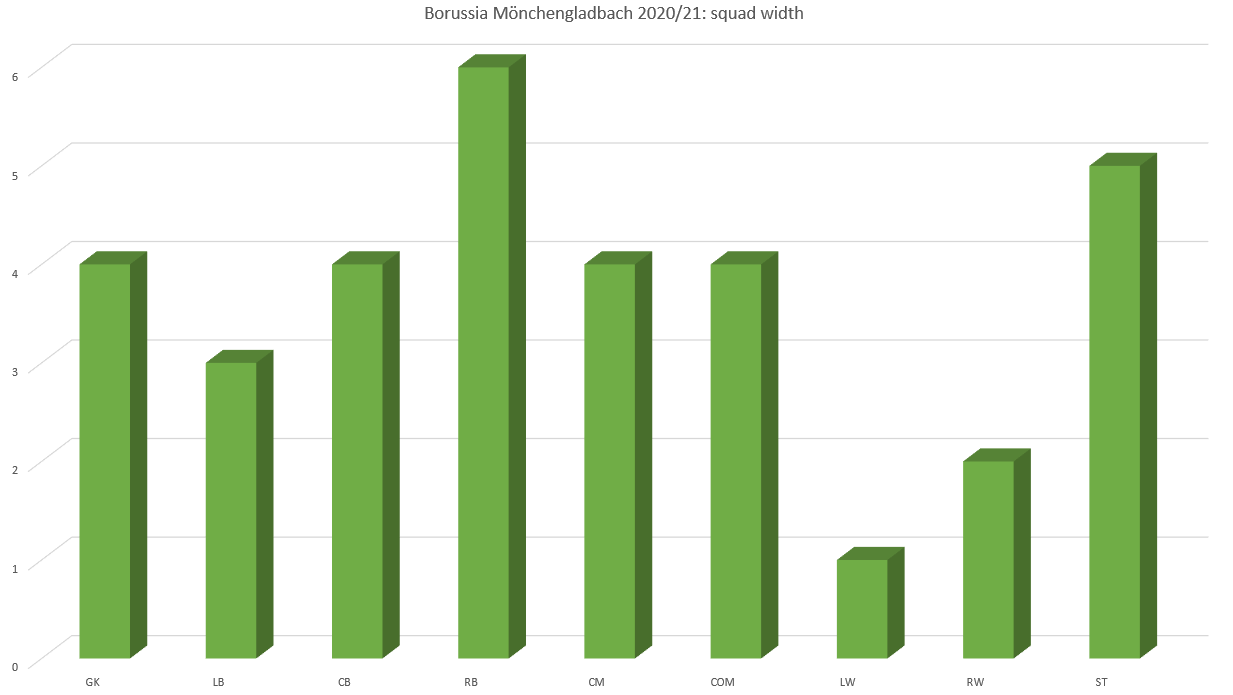 Gladbach, do not have a problem in the goalkeeper position. On the contrary, they have one of the best goalkeepers of Bundesliga in their own ranks. Yann Sommer (31) is in the best age for a goalkeeper and therefore, provides the perfect mix of experience and a high-performance limit. Even if Sommer didn’t stop lots of crosses last season, he saved a lot of goals above average. In this category, he is the best goalkeeper in Bundesliga. Tobias Sippel (32) and Max Grün (33) are two more experienced goalkeepers and with Jan Olschowsky (18), they have a promising talent in this position as well. 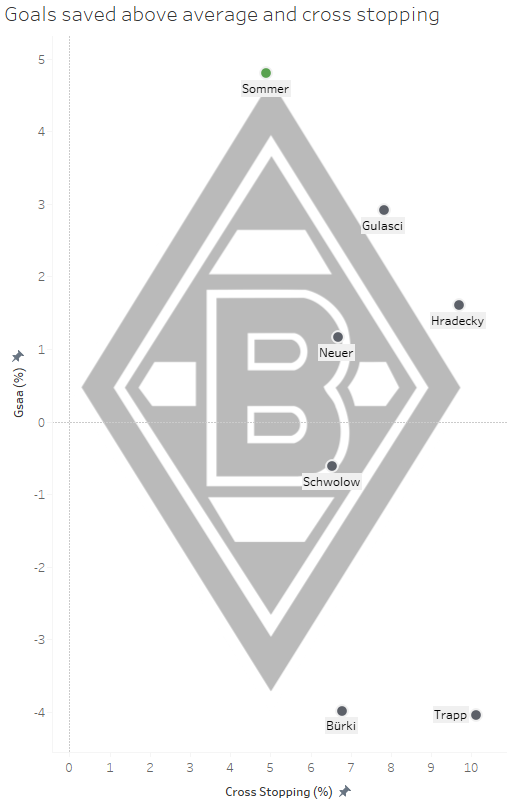 Matthias Ginter, Nico Elvedi, Tony Jantschke and Mamadou Doucouré build the central part of Gladbach’s defence. Doucouré was injured for a very long time and gave his debut last season after the Covid-19 break. Nico ELvedi and Matthias Ginter are essential for Gladbach’s extraordinarily good defensive stats. As the third-best defence, they only conceded 40 goals in 34 matches. Elvedi and Ginter are doing a quite good job in Gladbach. They win their aerial duels extraordinarily often. 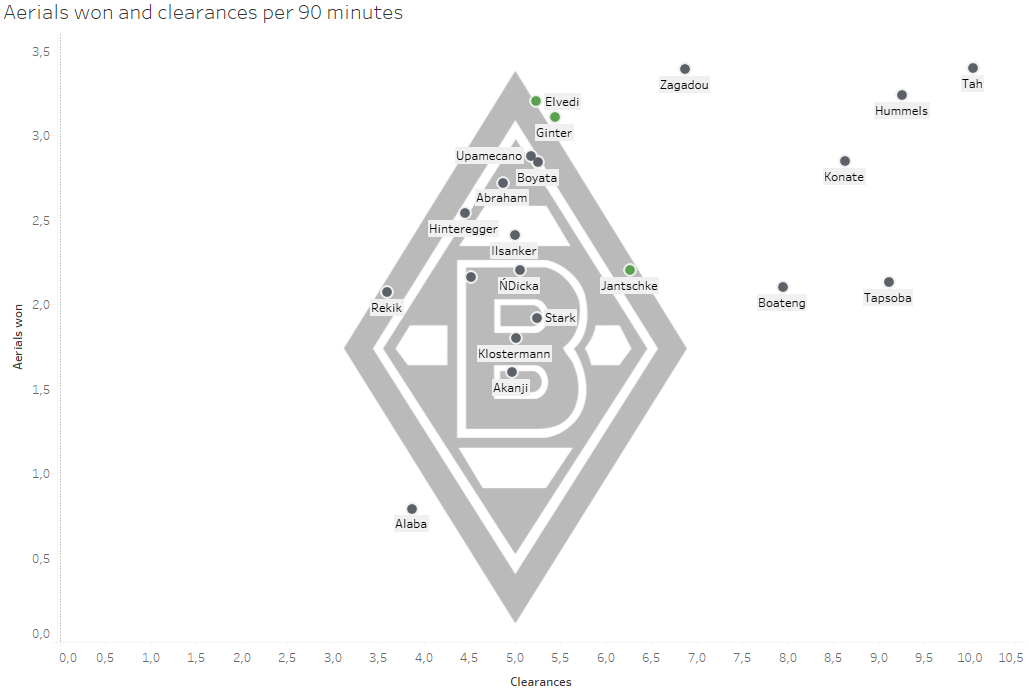 Gladbach’s full-backs were probably their biggest problem last season. Even if Stefan Lainer played a good season, they had not enough players for their full-back positions: Lainer, Oscar Wendt and Ramy Bensebaini were the only three players available. For next season, Andreas Poulsen (Austria Vienna), Jordan Bayer (Hamburger SV) and Michael Lang (Werder Bremen) will return from their loans. Adding to that, Joe Scally (NYCFC) and Lazaro will join the team. Now, they have enough players for both sides and with Lazaro, they got a good player providing similar stats to Lainer. With a look on the triple loading of Bundesliga, DFB-Pokal and Champions League Gladbach has enough squad width in this position. 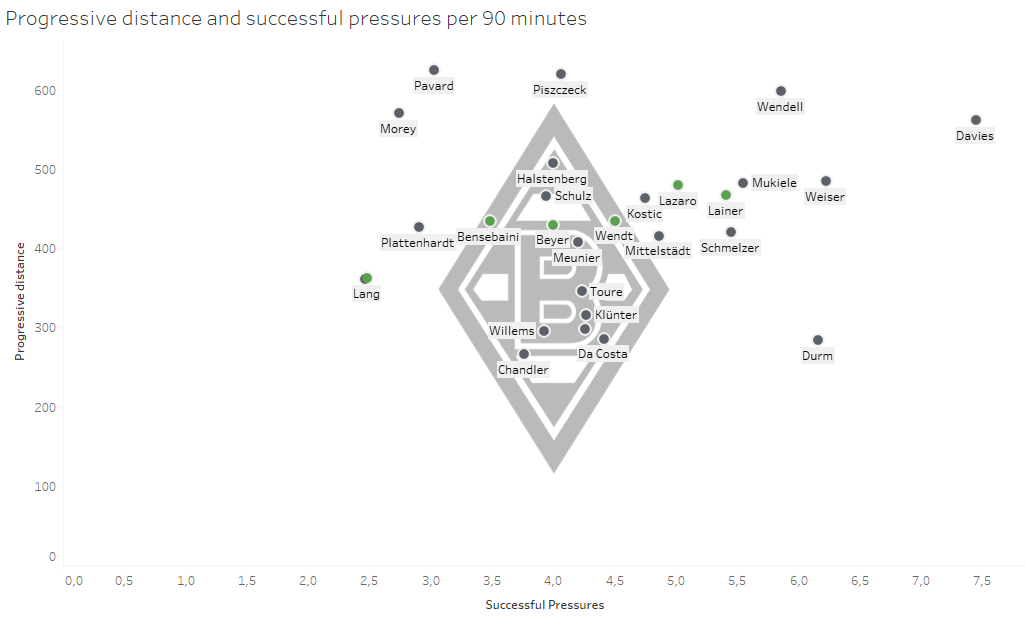 Gladbach have four central midfielders in their own ranks. All of them were regular starters last season and therefore, everyone is experienced in the Bundesliga. Zakaria was injured but will be on track before the season starts again. He will be one of Gladbach’s x-factors next season as he seems to be one of the most completed midfielders in Bundesliga at all. With Christoph Kramer, Rose has an experienced player as a back-up option. Lászlo Bénes and Florian Neuhaus are to find in rather advanced positions as counter-part to Zakaria who is responsible for the most defensive part in midfield. Especially Neuhaus did a good job last season and he is expected to even improve his performances. 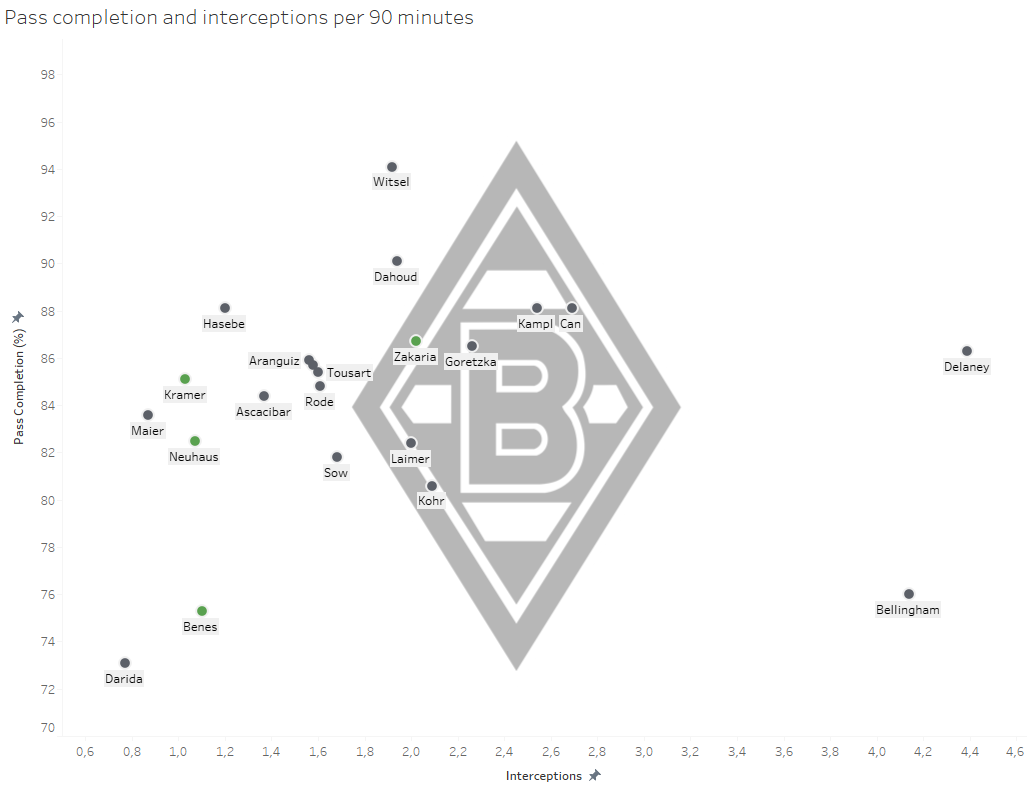 In central offensive midfield, Jonas Hofmann will get a new competitor with Hannes Wolf who played for RB Leipzig last season. Torben Müsel and Famana Quizera from the own youth academy will be on the official squad list for the upcoming season as well. While Wolf is involved in more offensive actions, Hofmann is able to play a more defensive role as well. Nevertheless, his xA is higher than Wolf’s who did not make lots of games last campaign because of an injury. 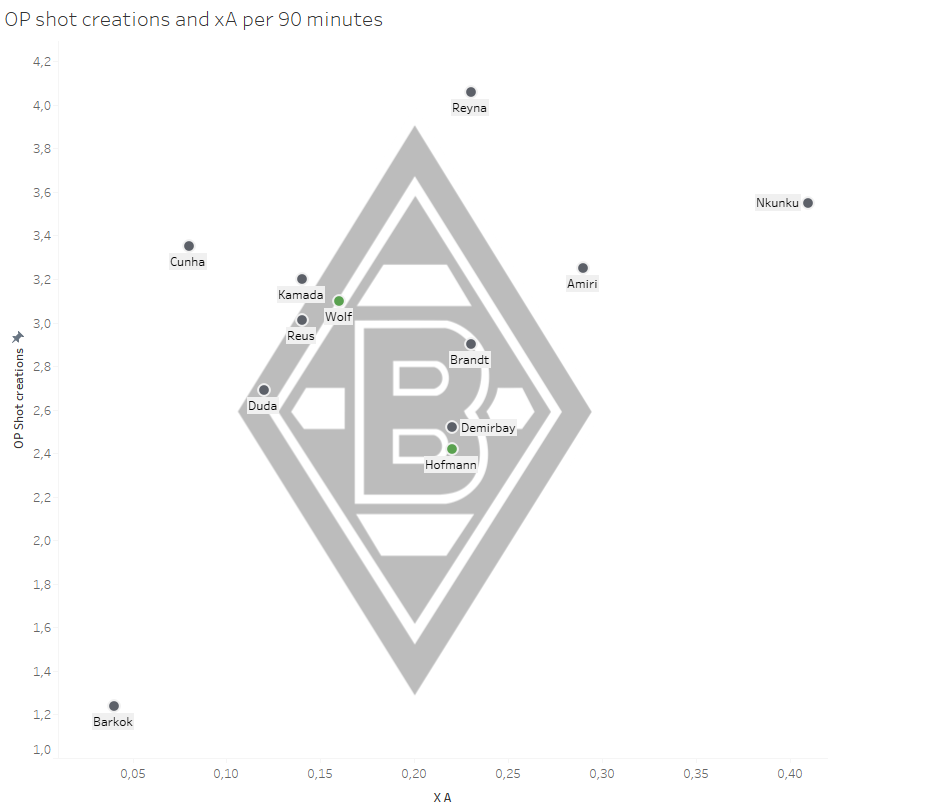 Gladbach have fewer options on the wings. Only three players are able to play in these positions. Ibrahima Traoré only played seven games last season and might be not a big factor next season as well. Patrick Herrmann is the other player who can play on the right-wing. Unfortunately, he is prone to injury. Nevertheless, he provided 6 goals and 8 assists last season. Breel Embolo (8 goals and 8 assists) is listed as a winger as well. However, he is used to playing as centre-forward. According to the line-up, Embolo could move between these two positions throughout the season. Keanen Bennetts did not play much last season but could be a factor next year considering the tight schedule with lots of English weeks. 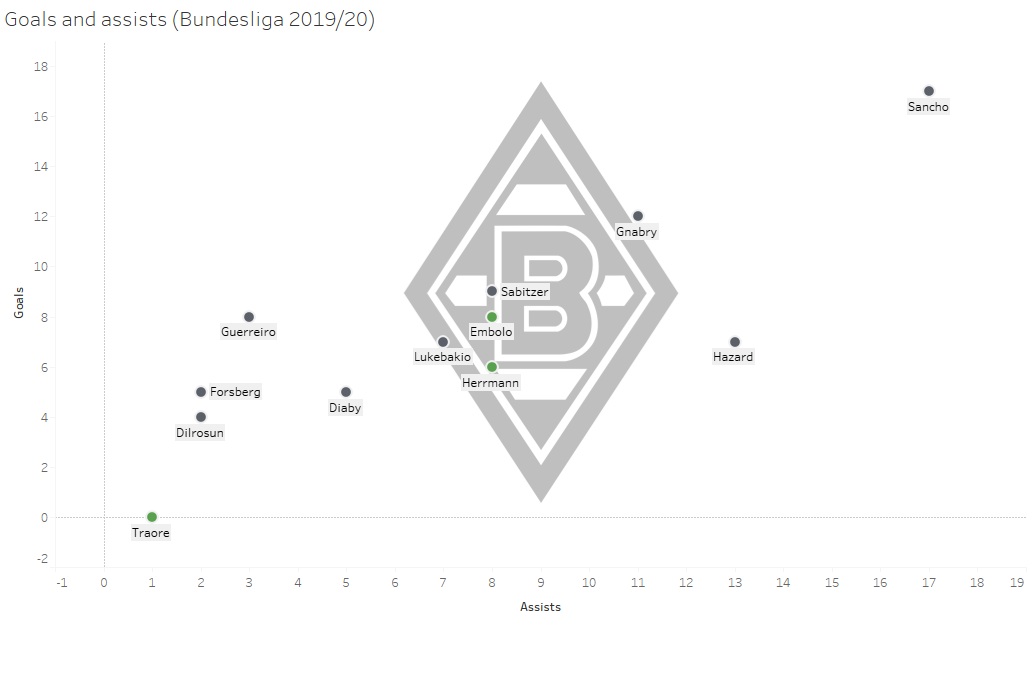 Gladbach is very well set up in the forward position as they have 5 players who can play as centre-forward. Marcus Thuram and Alassane Plea build a very good duo and, with Lars Stindl, a very smart and creative player is in the squad as well. As you can see in the image below, Thuram and Plea have a rather high xG rate. Nevertheless, Stindl is the better finisher with a conversion rate of nearly 25% as he scored with almost every fourth shot. This is an even better rate than Robert Lewandowski provides. Julio Villalba returns after his loan to SCR Altach and might be an option against weaker teams as he will need playing time to improve. 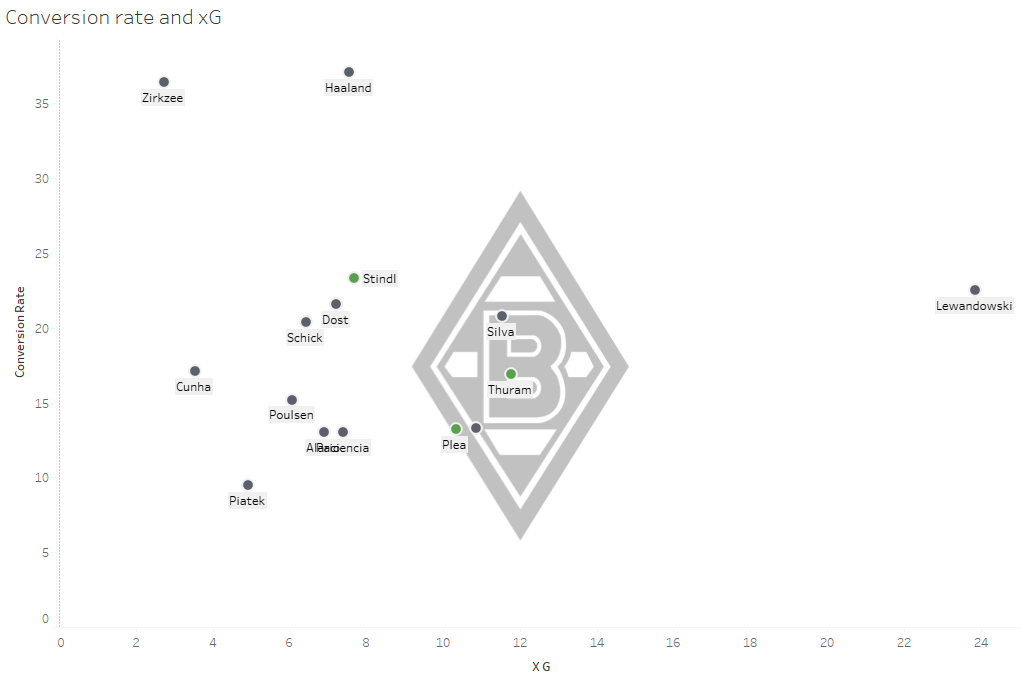 Rose and his coaching staff lined up their team in a 4-2-3-1 formations most of the times last season. 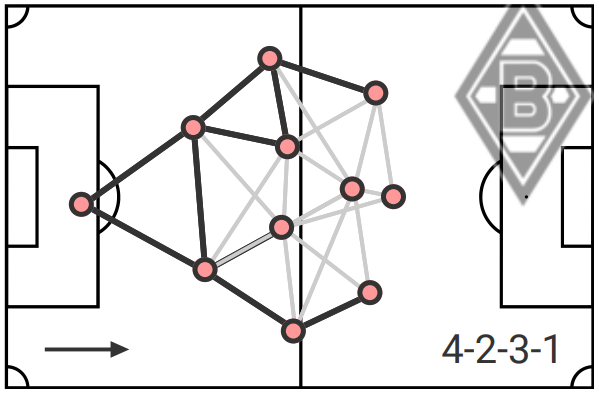 However, after the signing of Hannes Wolf and their squad width in central midfield and in the forward position, they could change their formation into a 4-2-2-2. This system is used by Julian Nagelsmann at RB Leipzig and would fit to Gladbach as well. Lainer, Bensebaini or Lazaro, who are able to run up and down the wing the whole match, could play a more offensive role as they could be used like wing-backs to support the attack but within a back-four. Another option would be to play in 4-3-1-2. In this formation, they could take advantage of their big midfield and attack again to find a good balance between the defence and offence. Then, Wolf and Stinld could play as the only offensive midfielder and Hofmann would drop back into central midfield together with Zakaria and Neuhaus.

Gladbach have a balanced squad in terms of age (average: 24,79 years) and width. The mix of experienced Bundesliga players and young talents fits to Gladbach’s philosophy and with Rose, they have a coach who can work with both rather old and young players. Because of their lack of nominal wingers, the coaching staff should consider a change into another formation. Gladbach played very well last season and deserved to be placed within the top 4 to secure a Champions League spot. With a look at the triple load, Gladbach will face many matches in a tight schedule and therefore, it will be a tough challenge to play a similar Bundesliga season. However, they have enough players, lots of quality and nearly the same squad as last season. This means that only a few players will need to adapt to the playing style. That is why they will be able to get into the top 4 again with lots of hard work.