It was the opening weekend of the MLS this past weekend. After failing to beat Seattle in the MLS Cup last December, Toronto FC began their journey back to the league’s biggest stage with a trip to San Jose Earthquakes.

Toronto FC took a 2-0 lead, but couldn’t prevent a San Jose Earthquakes comeback in the second half. Both Greg Vanney and Matías Almeyda showed their ability to make tactical changes that would impact the match greatly. While the match ended in a draw, it would be Almeyda that would have the last laugh in the tactical battle. This tactical analysis will highlight the key tactical changes that the coaches made, and provide analysis on why it affected the game’s eventual result. 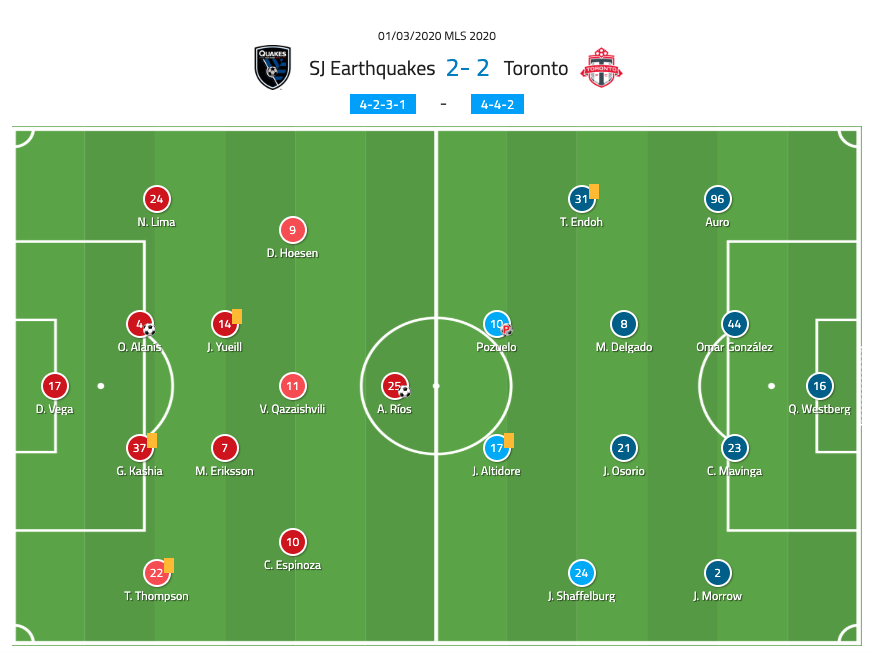 Toronto FC lined up with a conventional 4-4-2. Defensively the side kept two blocks of four, keeping Alejandro Pozuelo and Jozy Altidore higher up the park ready to attack on the counter. Vanney’s side were without their newest designated player, Pablo Piatti, who is currently recovering from a hamstring issue that will keep him out of the lineup for the first few matches. San Jose Earthquakes‘ Almeyda opted to start in a 4-2-3-1, which they kept for the entirety of the match.

Toronto FC were prepared to defend in this match, only managing to have 39.23% of the possession. Out of possession, they were organised, keeping eight outfield players behind the ball at all times. This allowed Altidore and Pozuelo to engage the San Jose players in possession of the ball near halfway. 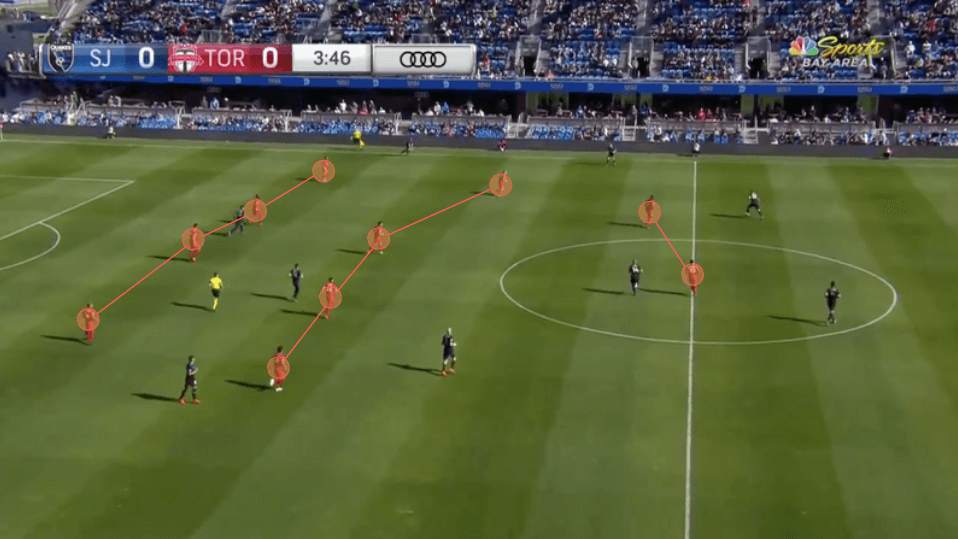 When San Jose moved to ball to wider areas the Canadian side maintained a good shape, ensuring that no San Jose players were left unmarked. This made it very difficult for San Jose to penetrate into Toronto FC’s penalty are during sustained period’s of possession. 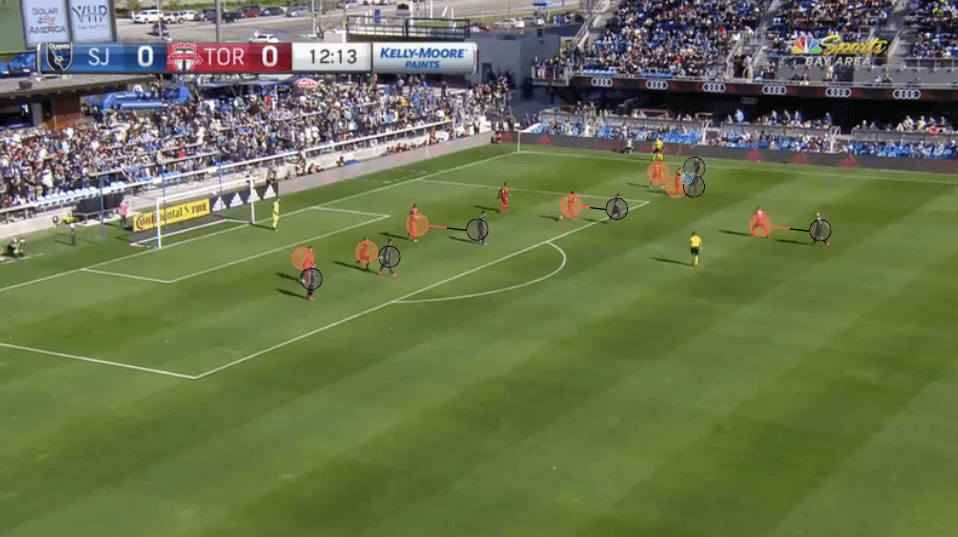 Toronto FC allowed 10.32 passes per defensive action, showcasing just how much San Jose passed the ball in order to move their defensive structure. San Jose only had a PPDA of 4.09. Despite this, the side’s had similar shot numbers.

Toronto FC managed four shots on target from eight shots, with San Jose Earthquakes managing five shots on target from 10 shots. Despite having nearly two-thirds of the possession, San Jose only managed to record slightly more shots than their opposition. Much of this is down to Toronto FC’s structured low block, which forced San Jose to show patience in chance creation.

Toronto’s midfield block wasn’t always sat right in front of the defensive line, however. When the San Jose midfielders were deeper, the Toronto midfielders would step out to meet their line, leaving space behind. We can see this shape below. 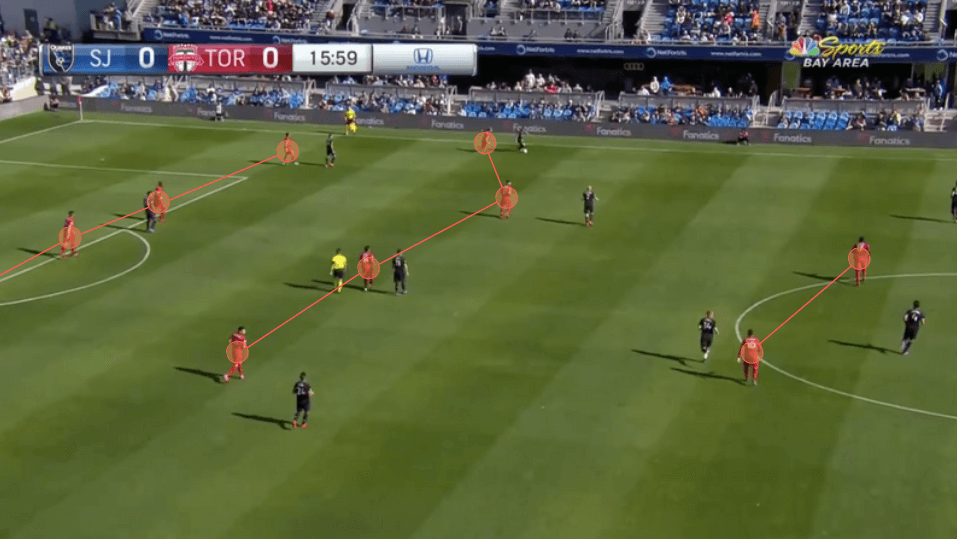 Despite leaving this space, Toronto FC were disciplined at staying goalside of their opposition, matching the movements of San Jose’s players.

This defensive shape resulted in Toronto FC relying heavily on counter-attacking football in their chance creation. They created two of their shots from counter-attacks, while San Jose failed to counter-attack once during the match.

Toronto FC double up on the right

During the first half, San Jose attacked up the left side of the field, utilising Nick Lima as an overlapping left-back with left attacking-midfielder Danny Hoesen. The duo pushed high up the field, causing lots of problems for Toronto FC’s Auro Jr. The Earthquakes’ left-back was often further advanced than his midfield partner, providing width for his team in attacking areas. We can see an example of this below. 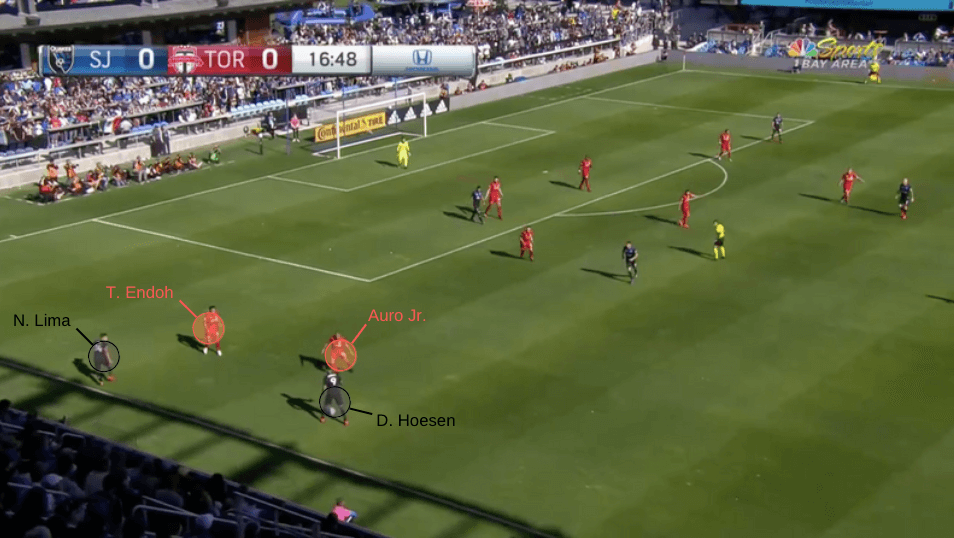 We can see another example of how important Lima was to his team’s attack below. His position forced Tsubasa Endoh to drop back into a more defensive role. In the example below Endoh gets easily beaten on the 1 v 1, resulting in a shot from Lima that forces a great save out of Quentin Westberg. 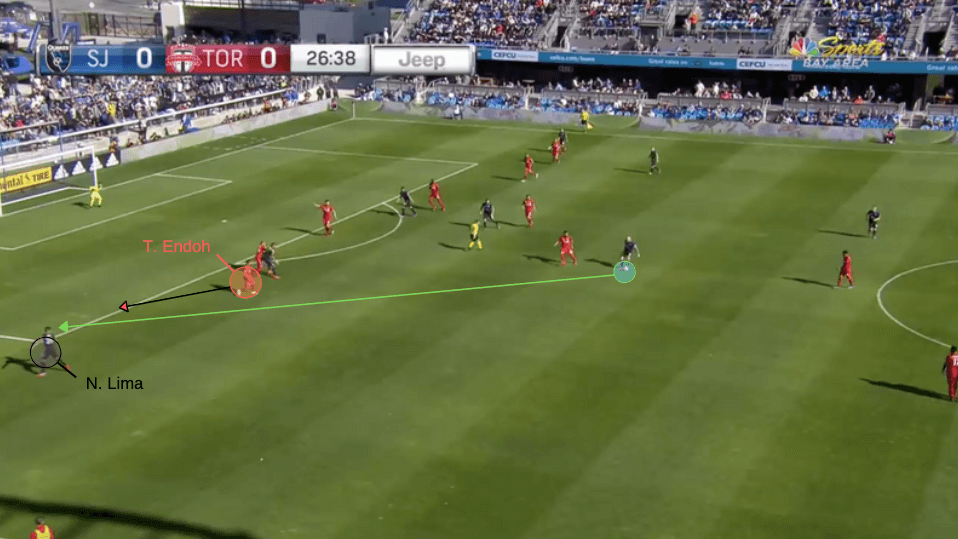 At half-time Greg Vanney’s side found themselves up 1-0, initiating him to a more conservative approach to the second half. He pulled off left-midfielder Jacob Shaffelburg for Richie Laryea. Laryea would move over to the right side of midfield, with Endoh being subsequently moved over to the left.

We can see from the image below how Layrea was tasked with keeping Lima quiet, providing relief for Auro Jr. to handle Hoesen. The duo would act almost as two right-backs, with Layrea taking on more offensive responsibilities. 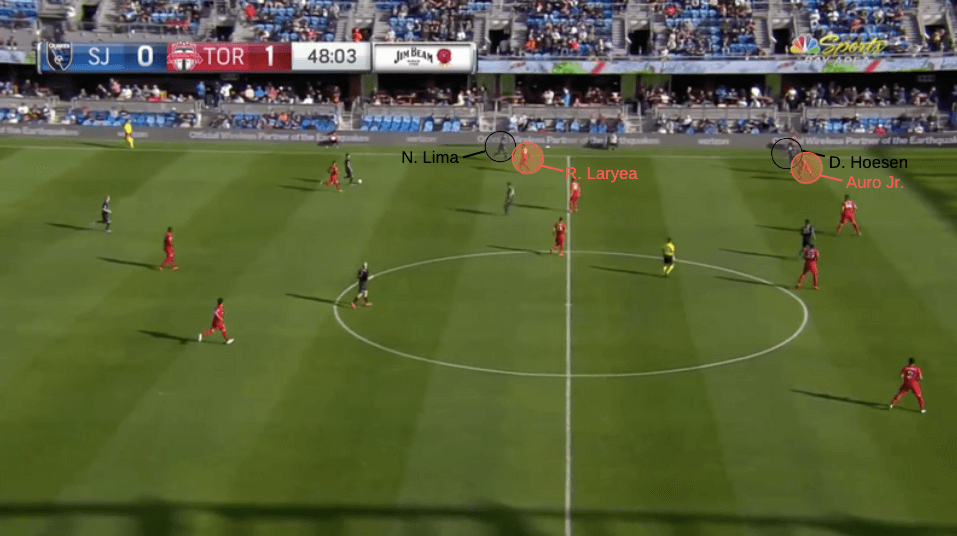 In this passage of play, the ball is played directly into Hoesen, triggering an overlapping run by Lima. Layrea follows the run, forcing Hoesen to play the ball backwards. As play resets, both Layrea and Auro Jr. stick with their men. 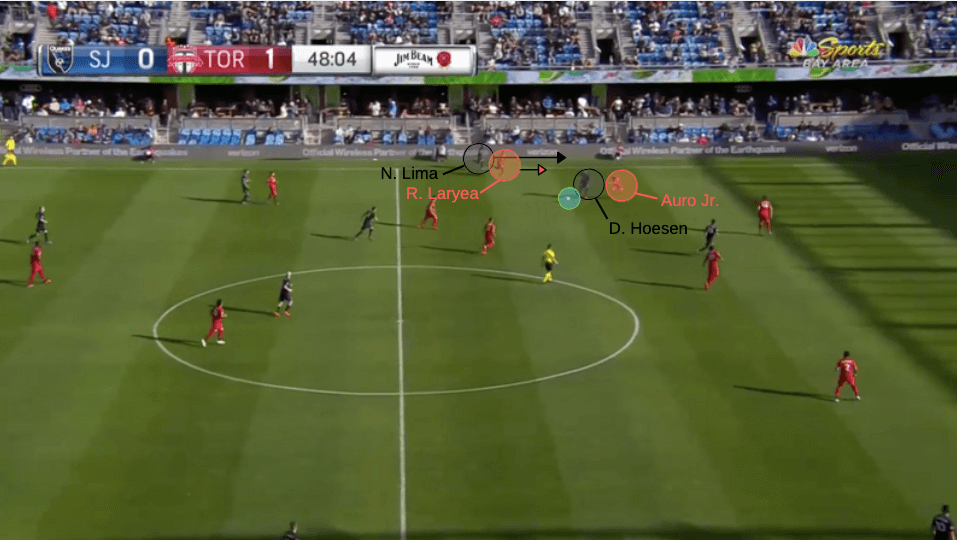 Layrea’s defensive focus also led to him intercepting a pass into Hoesen, allowing his team to quickly transition up the field. Layrea was on hand to smash in the rebounded shot of Endoh to double Toronto FC’s lead.

However, just minutes later San Jose equalised after a quick break down the right side of the field. Endoh wasn’t able to recover back quickly enough after the switch of play, leaving Justin Morrow exposed to a 2 v 1 with Tommy Thompson and Cristian Espinoza. Espinoza had ample time to place a brilliant cross into the box, which was finished off by Andrés Ríos.

While Vanney’s tactical switch both prevented the progression of Lima on one side, and inspired the counter-attacking goal of Layrea, it also left his left-back exposed to the attacking threat on the opposite side of the field.

In the 63rd minute, Almeyda replaced right-back Thompson with Shea Salinas. However, Salinas entered the game at left-back, shifting Lima to the right. This allowed Lima to once again progress further up the park with freedom. 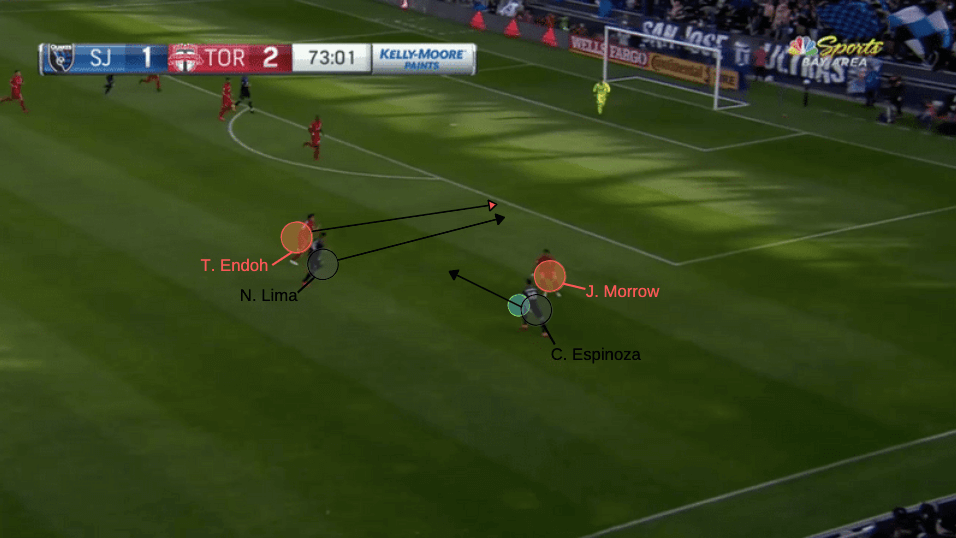 Throughout the course of the second half, the Earthquakes began finding success on their right side, linking up between the Toronto FC players to create crossing opportunities. This culminated in Toronto FC getting every player back to defend a last ditched effort by San Jose to tie the game in the last minute of stoppage time.

Espinoza picked up the ball out wide, forcing Endoh to step to him. Instead of providing support to his teammate, Morrow holds a higher position to prevent a pass into Lima. Espinoza takes on Endoh in a 1 v 1, forcing a foul. San Jose were awarded a freekick from which they scored the game-tieing goal. 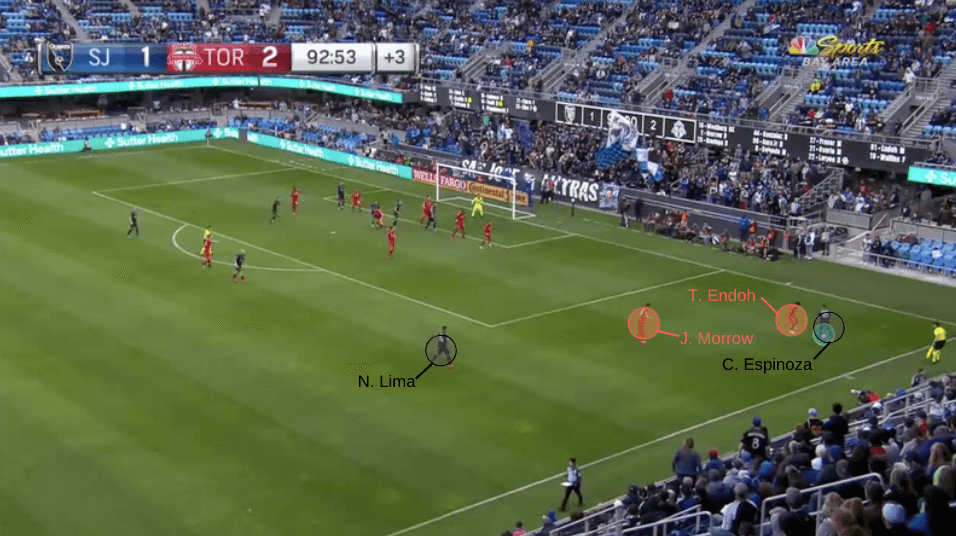 Both coaches’ tactics were evident in this match. While Toronto FC set up defensively, they took a first-half lead, inspiring Vanney to adjust his personnel to deal with the threat of Lima. However, while this tactic was effective at first, it inspired a counter tactic from Almeyda that won San Jose a valuable point.

Despite not being the better team on the day, as shown by this analysis, Toronto FC will feel let down after losing their 2-0 goal lead. San Jose Earthquakes’ patience to get back into the game was rewarded, trusting their system with some slight tweaks. Lima deserves a lot of credit for his role in the comeback, despite not being directly involved in any of his team’s goals.