There have been a plethora of names linked with Inter Miami as David Beckham builds a squad for the club’s inaugural season. Matías Pellegrini became the club’s first-ever designated player when he signed for the Florida side on July 23, 2019. Earlier this week, however, the arrival of Inter Miami’s second designated player, Rodolfo Pizarro, was confirmed.

The player was officially announced days after playing for Inter in a pre-season friendly, in which he managed to score during the side’s 2-1 loss. This tactical analysis and scout report will hopefully shed light on what the MLS can expect from the Mexican, and how he has affected his team’s tactics in the past.

Rodolfo Pizarro made the move from Monterrey to Inter Miami for £9.82 million. He is an attacking midfielder who is known for his creativity and brilliant vision. Born in Tampico, Mexico, the 26-year-old has spent his career playing professionally in Mexico up until this point.

Pizarro has played a total of 266 games during his time at CF Pachuca, CF Monterrey and Deportivo Guadalajara. In these games, he scored a total of 33 goals and registered 41 assists.

The midfielder also debuted for the Mexican national side under Miguel Herrera in 2014. He has since gone on to make 25 appearances for El Tri, scoring five goals and registering five assists. The rest of this analysis and scout report will highlight some of the key traits that Pizarro will bring to Inter Miami.

The most impressive aspect of Pizarro’s game is his playmaking ability. Of course, he can be clinical in the box if given an opportunity, but a deep dive into his best actions from his time playing in Mexico showcases his incredible passing range and vision.

These statistics are reflected in his style of play. He is capable of making passes from multiple angles and distances. In the following scenario, we can see him feeding one of his teammates in and behind the opposition’s lines from a central area. 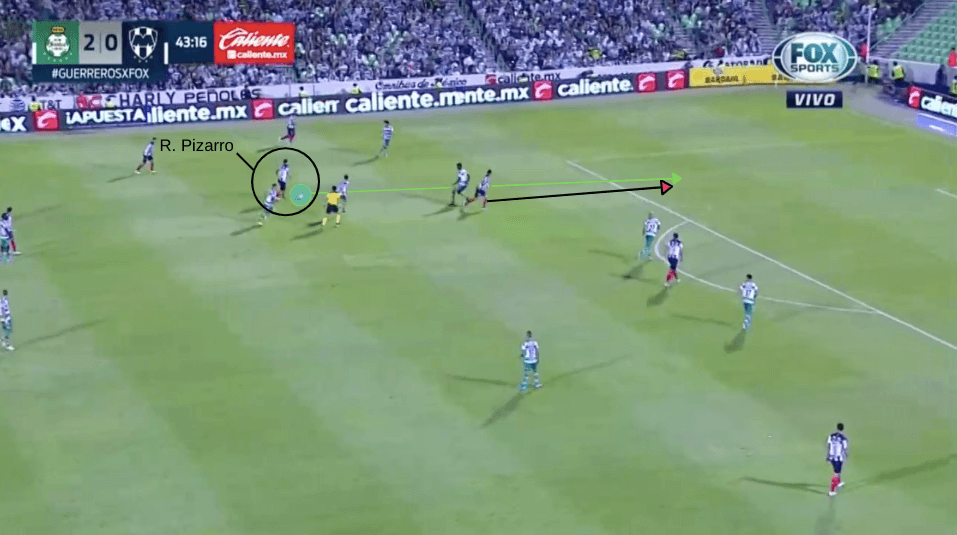 This results in his teammate receiving the ball in the box, where he opts to shoot at goal from an angle. The goal is saved, however, and the attack ends. But if we look at the image below, we can see how Pizarro’s teammate could have cut the ball back for a free shot at an open goal. 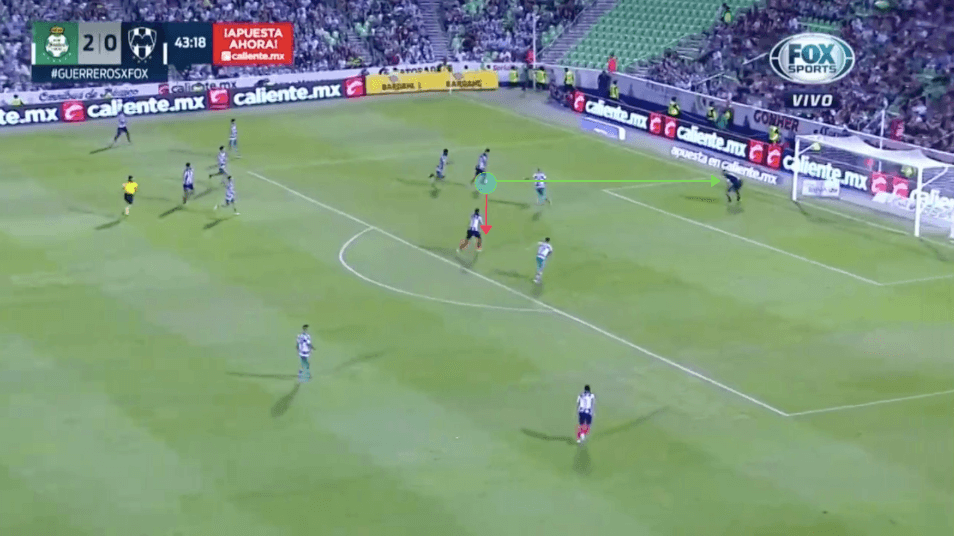 When he finds himself in positions like the one above, Pizarro has shown his vision to cut the ball back into his teammate’s path. We can see an example of this below. From a near-identical angle Pizarro cuts the ball back into the middle of the box, however, his teammate doesn’t react quick enough and the chance is wasted. 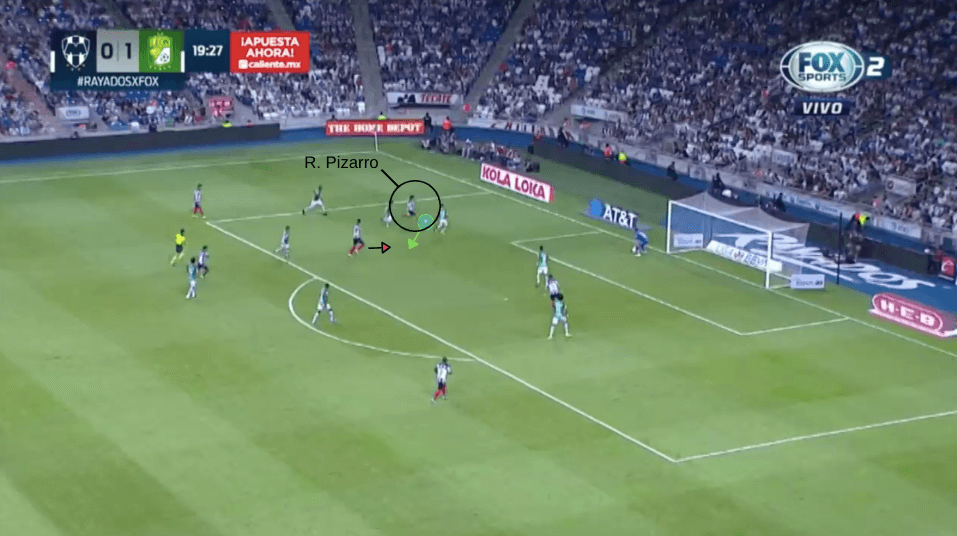 He is constantly looking to play his teammates into space, instead of looking to score for himself. In the example below, we can see Pizarro dribbling into space with the ball at his feet. Instead of driving into the free space, he picks out the run of his teammate with an acute-angled pass.

His teammate is played into space, creating a 1 v 1 with the goalkeeper, however, the receiver makes life difficult for himself by taking a large touch out wide. This makes the angle too narrow for him to shoot at the open net. He does manage to chip the ball back post for an oncoming teammate, who scores the tap in.

While watching the footage from these scenarios, it is interesting to notice how Pizarro makes these passes without scanning the field first. He appears to always be aware of his teammate’s positions and movements when he has the ball at his feet.

It’s not just from central areas where Pizarro finds himself having an impact on games from a chance creation perspective. He can also unlock his opponents’ defences from drifting into wider areas to pick up the ball and progress the attack down the channels.

We can see from his 2019/20 heatmap that he impacts games across the width of the entire opponent’s half.

In the example below Pizarro drifts out to the channel to receive the ball from his right-back. He quickly turns and plays the wide attacker into space in and behind the opposition’s left-back. 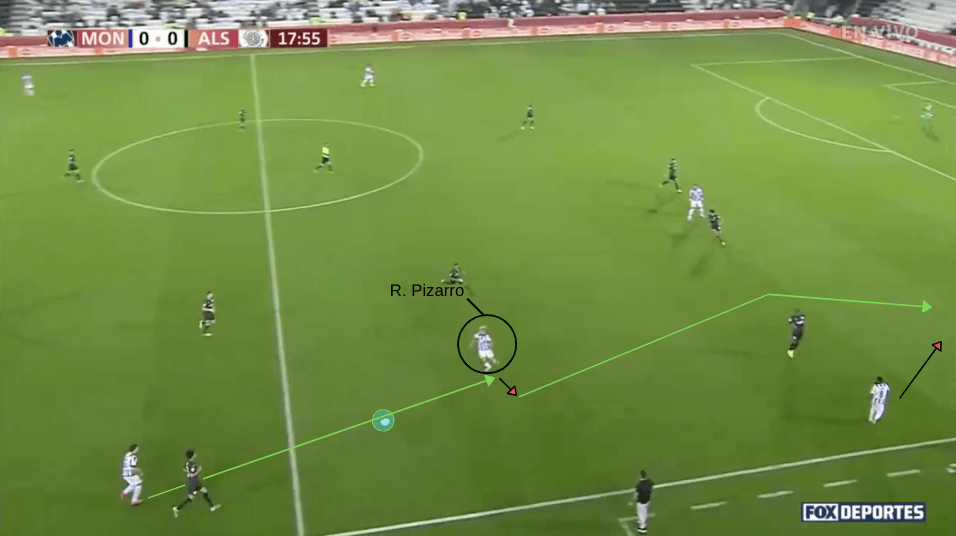 But his channel play isn’t just limited to progressing the ball with linkup play. During this match against Liverpool, we can see Pizarro drift into a wide area while the ball is central. He receives the ball from his teammate and dribbles into the free space before delivering a dangerous ball to the back post. 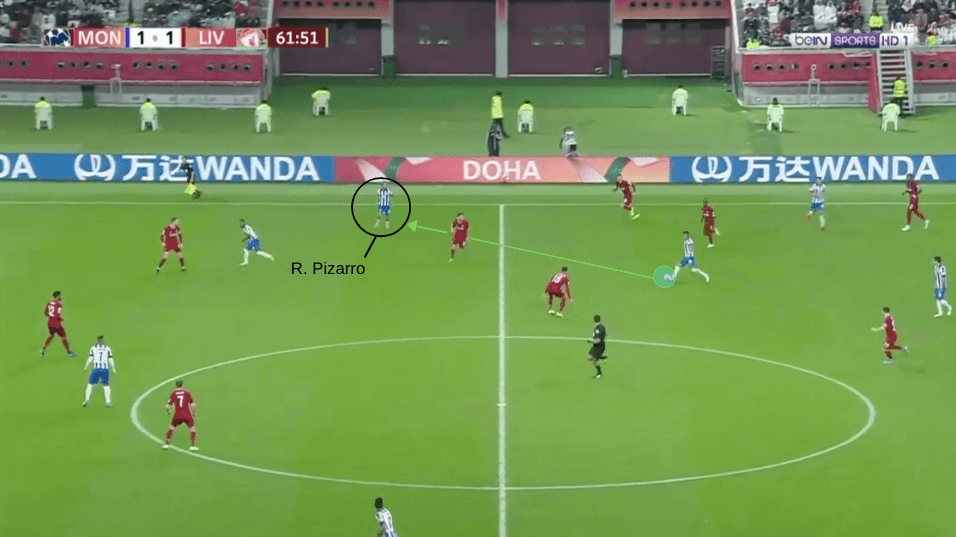 We can see another example of Pizarro delivering a dangerous cross into the box from a wide area here. He places the ball on his teammate’s head, however, the ball drifts past the back post. 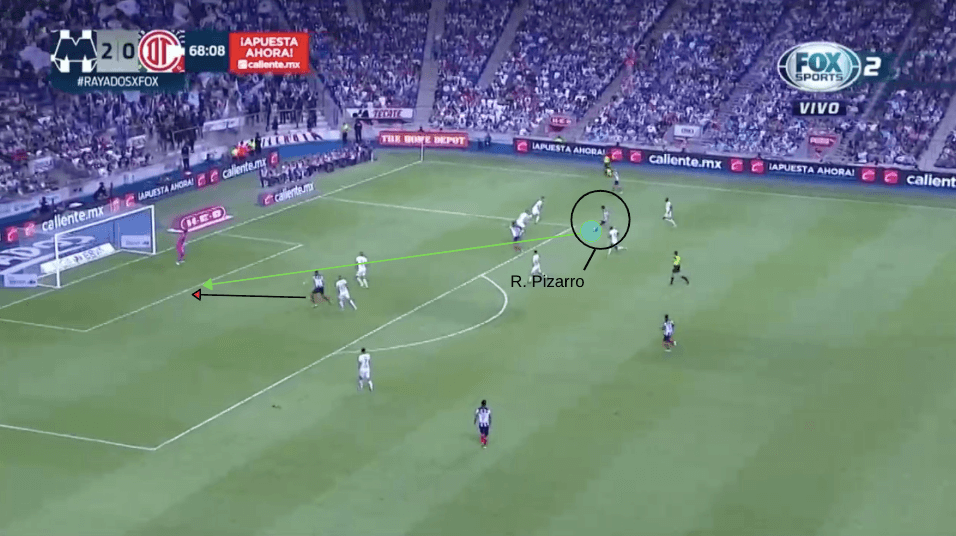 These examples showcase how Pizarro is capable of linking up play and creating goalscoring chances from wide areas. His ability to be an effective playmaker from anywhere in the final third makes him a dangerous and difficult player to mark. It also makes him a versatile option for Diego Alonso.

What to expect from him?

It is difficult to know exactly how Pizarro will fit into Diego Alonso’s team until we know the coach’s tactics. What we can expect is that Pizarro will be the centre of Alonso’s attack. He is a brilliant attacking midfielder with an impressive vision and passing range. He will help break the lines and create goal-scoring opportunities for his new side.

Should Alonso choose to set up with multiple attacking-midfielders – as many other MLS teams have done in the last few seasons, Inter Miami fans can take comfort in knowing that Pizarro can be dangerous from the multiple areas of the team’s attacking-third.

Pizarro should be a solid signing for Diego Alonso’s side. He has had some experience playing against MLS opposition in the past during the CONCACAF Champions League. During his time with Monterrey, he faced Sporting Kansas City and Atlanta United, winning both ties on aggregate.

With Guadalajara he faced Toronto FC, New York Red Bulls, and Seattle Sounders, winning the New York and Seattle ties outright. The two-legged final against Toronto FC ended with a 3-3 aggregate, however, Pizarro and his side came out victorious during the penalty shootout.

Of course, Pizarro’s talent with the ball will be an asset to Inter Miami, but his experience against MLS opposition will also be a major reason why David Beckham has recruited him. He is certainly a player to focus on as Inter Miami progress through their inaugural season.