The round of sixteen draw in the UEFA Champions League saw Chelsea drawn against a then resurgent Bayern Munich side, who were still finding their feet under new manager Hansi Flick. Fast forward to the actual fixture, and Bayern look like the usual dominant, tactically excellent Bayern, and coming into the game Chelsea were rightfully underdogs. Bayern imposed their tactics on the English side and reminded everyone of the quality of German football, not that anyone who has followed Flick’s Bayern needed to be reminded. In this tactical analysis, we will look at how Chelsea’s pressing and its triggers looked to halt Bayern, how Bayern overcame these, and look at Bayern’s build-up structure and positional play which secured them a 3-0 victory.

Bayern Munich lined up in their usual 4-2-3-1 structure, with one of the double pivots often dropping into the back three in order to aid the build-up. Chelsea meanwhile lined up in a 3-4-2-1 and looked to use this structure to press Bayern effectively during their deep build-up. 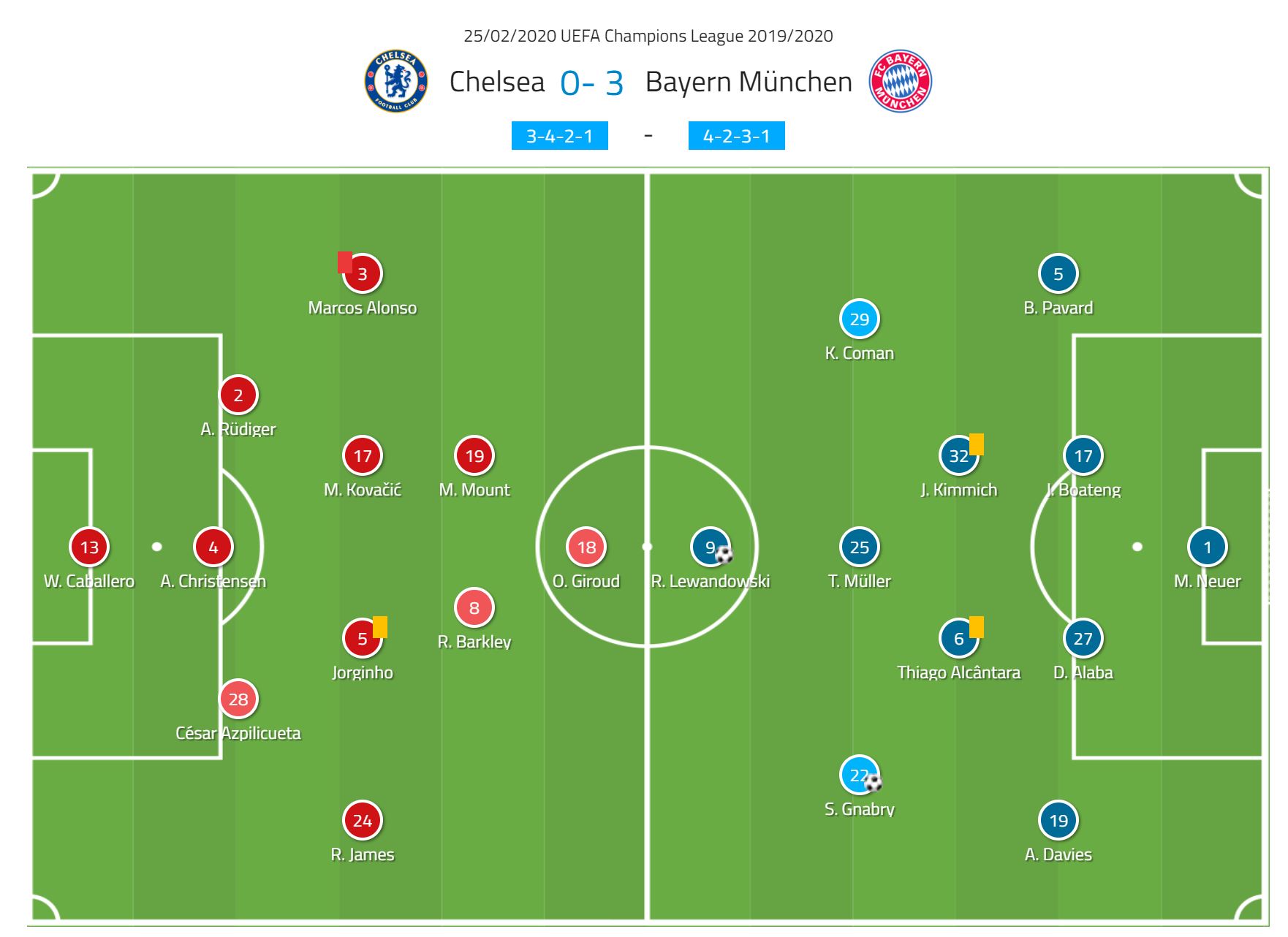 Bayern’s usual back three cause issues

Bayern used the back three to their advantage by dropping one of the pivots into the defence, something Bayern regularly do. Below we can see an example of a back four build-up, with the main disadvantage being that the coverage along the back line is poor. This means that the two centre-backs have to stay reasonably close together, as there are only two players covering this back line. If they go too wide, they risk passes being intercepted or taking too long to get to the intended target. Therefore, if the ball is switched to the other centre-back, they can be pressed easily and in this example, the passing lane to the full-back can be cut. 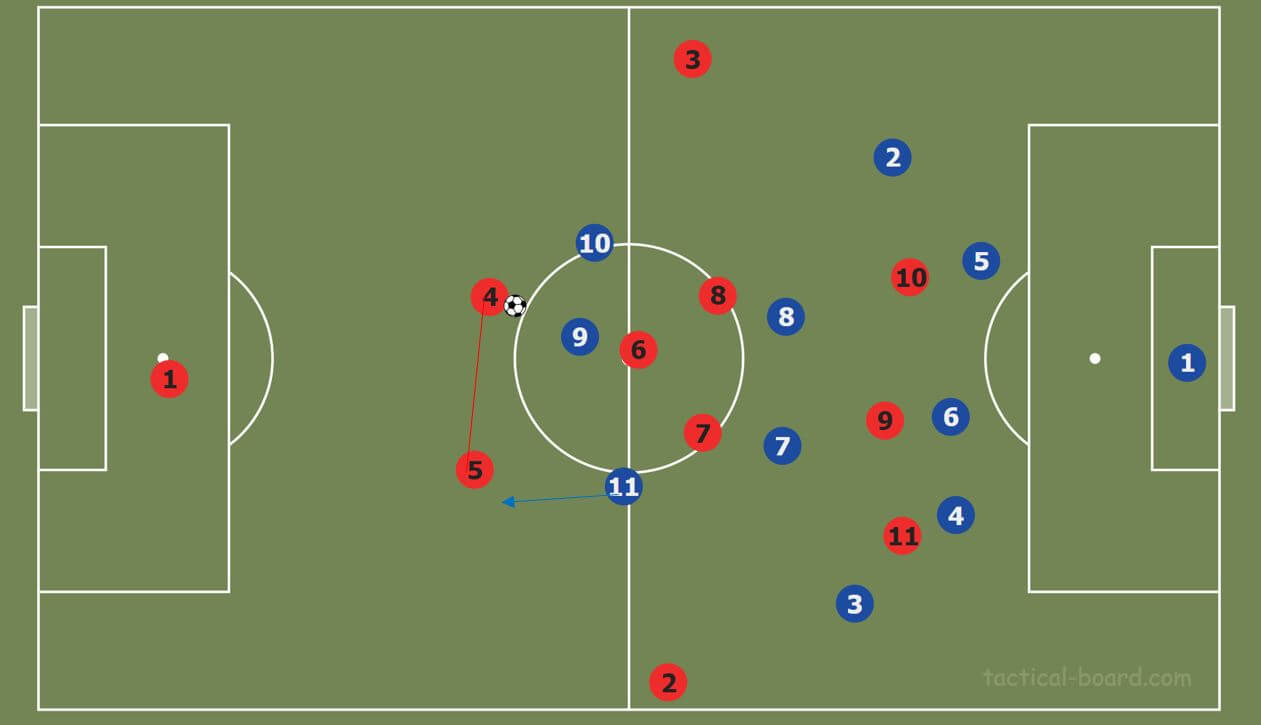 Here, however, we can see the shape Bayern often looked to use in the game, with a back three being created. This allows for better coverage of the back line, which stretches the first line of the press and therefore means that the passing lane to the wing-back can no longer be cut by the pressing forward. As a result, the wing-backs are allowed more space, something you most likely saw Alphonso Davies take advantage of well. If the wing-back concedes space, the opposition wing-back must move to press, which allows for movements to be made down the line to create space in the half-space or vice versa. 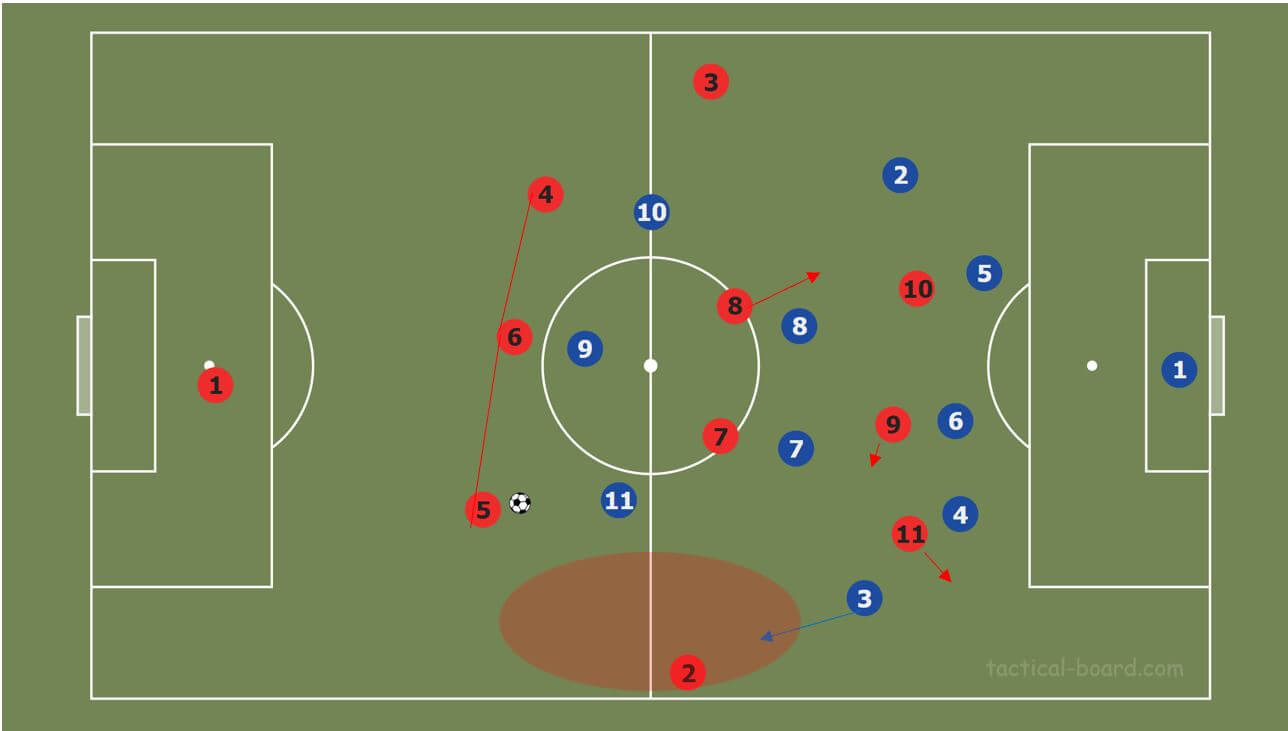 We can see Bayern using this principle below, with Ross Barkley having pressed the widest centre-back, which in this case was Joshua Kimmich who had dropped. From here, Bayern threaten down the line, and Thomas Müller runs from deep in order to arrive onto a pass in the centre, with height provided by Robert Lewandowski to prevent Chelsea’s back line from stepping out too far.

We can see a similar situation again here, with a 3v3 created along the first line resulting in the ball being progressed to Alphonso Davies in space on the left. This creates a 2v2 down this side, and Bayern win this duel, and Davies can run through down the line and deliver into Lewandowski to make it 3-0.

To combat these types of situations taking place, Bayern used pressing triggers to look to hinder Bayern’s build-up, which was successful at times (particularly in the first half) as we can see in this next section.

In order to prevent this shape that Bayern often take up in the build-up, Chelsea looked to press aggressively based on the correct triggers, with Mason Mount often influential to this process. When Bayern were in their back two formation and couldn’t play forwards, Chelsea’s attackers would press aggressively and the rest of the team would also push higher to look to win the ball. We can see here Jérôme Boateng is about to receive the ball, with Bayern not having a numerical advantage along the back line. Boateng’s body orientation also isn’t good for playing forward, and so Mount presses aggressively to force a backwards pass.

Here again, Boateng receives the ball, and Chelsea are in good starting positions, with Bayern not having a clear numerical advantage. Boateng isn’t facing directly forward and so can’t progress the ball quickly, which triggers Mount to move and press aggressively. Mount also scans and adjusts his movement slightly to cut off the right full-back.

This forces a backwards pass from Boateng back to Manuel Neuer, who distributes the ball poorly into Chelsea’s now tight pressing structure, and Chelsea are able to create a chance from winning the ball back high up the pitch. 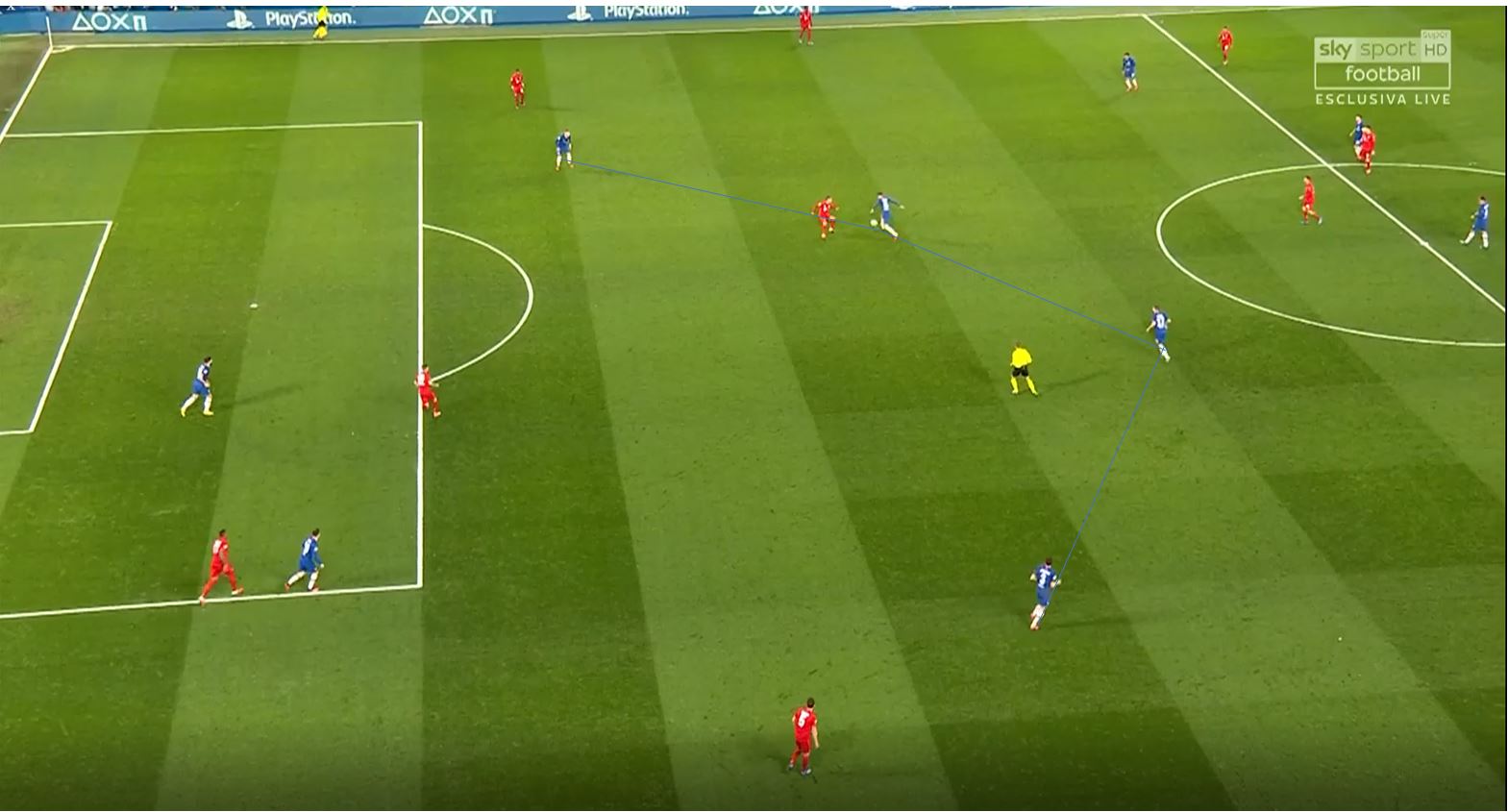 When the pivot did drop as we can see below, Chelsea recognised that they could not usually press as aggressively due to the numerical superiority Bayern now had, and as a result, they were often more passive in possession. As we will discuss in the next section, as a result of the movement of Bayern’s midfield and forward players, Bayern were then able to access the third line immediately.

When pressing high, Chelsea would often press the pivots if they received the ball with their back to goal, again in order to force the ball backwards. But within a 5-2-3 pressing structure, if a central midfielder pushed forward, this would become a 5-1-4, meaning one defender would usually push higher, making the structure now a 4-2-4.

But within a 5-2-3 pressing structure, if the central midfielder pushed forward, this would become a 5-1-4, meaning one defender would usually push higher, making the structure now a 4-2-4.

With this transition difficult and the centre-backs reluctant to step high into midfield, if pressure wasn’t applied effectively on the ball then Bayern could create and utilise overloads in the midfield area. Here we can see Chelsea pressing in a 5-1-4 formation, and Bayern creating a 3v1 overload around Mateo Kovačić (who is excellent by the way). 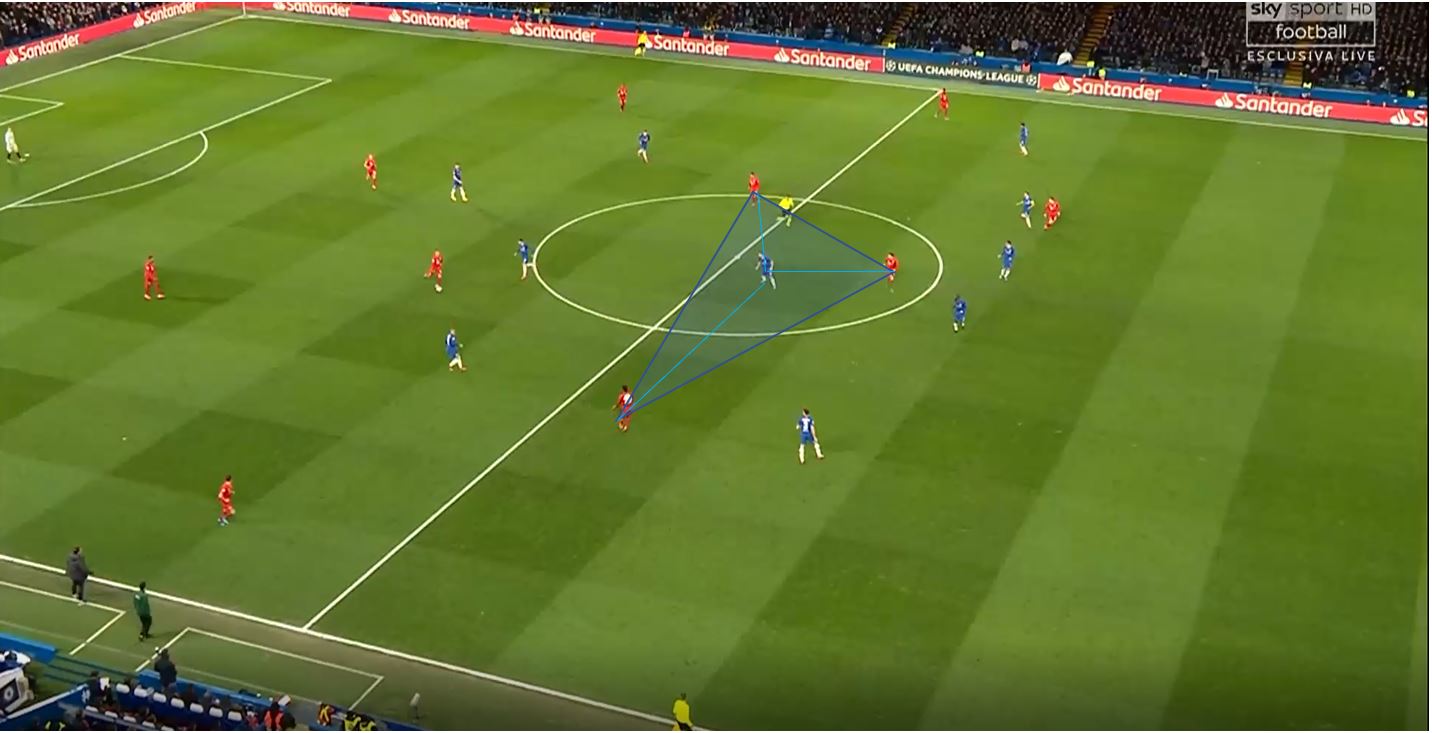 These overloads happened when Bayern were able to utilise a back three, and we can this below with Jorginho signalling to the players behind him that he is overloaded and can’t do both jobs.

Therefore, Bayern had the opportunity with one pass to effectively play against Chelsea’s third line or defensive line. If they could lure the press and attract central midfielders to press with their triggers, then they could look to play slightly more direct into Lewandowski.

We can see this perfectly in the second goal, where Chelsea press with Jorginho tight to Thiago, and Mason Mount triggered to press Manuel Neuer.

Neuer is able to play a lofted pass to Lewandowski, who is matched up against Azpilicueta and wins the header, knocking it down to Serge Gnabry before both the players combine for the goal. By forcing this press, Bayern committed more Chelsea players forward and also drew a player from the back line, which Lewandowski was able to bypass easily to create chances from.

We can see in this example again, Thiago is marked tightly by Jorginho and the press is bypassed with a direct pass to Lewandowski, who again wins the header.

Bayern’s offensive structure of keeping the central midfielders often behind the ball not only helps them in terms of ball circulation but also in terms of counter-pressing. We can see this structure below, where if Kingsley Coman receives and plays the ball effectively, Kimmich’s positioning allows for vertical support the ball to be switched or played through. If Coman receives poorly and gives the ball away, there is a chance for immediate pressure from in front from Kimmich, which helps them to prevent counter-attacks.

We can see this again here where Bayern lose the ball and Chelsea quickly transition, but both central midfielders are in good positions to stay behind the ball and apply pressure in front of the Chelsea player, which helps to prevent vertical passes.

As discussed within this analysis, it was a result many people who have followed Bayern Munich probably would have expected, and Bayern look like a real contender for the Champions League trophy on current form. Chelsea’s limited attacking options didn’t help matters, and I personally would have preferred to see a pacier, tricker player up against Boateng than Olivier Giroud, as Boateng has had his troubles recently against these kinds of players. Chelsea also didn’t have much of a plan of how to combat Alphonso Davies, and Bayern’s third goal was remarkably similar to a goal they scored that Chelsea will definitely have been aware of. An asymmetrical shape to push Bayern towards the right and onto Pavard would have been potentially more effective,  but overall the gulf in quality between the two teams showed.