In the second leg of the UEFA Europa League’s first knockout round, Braga welcomed Rangers in what was meant to be their rematch after the tense duel in Glasgow. The home side had lost a great advantage from the first match in the closing minutes, and were dedicated to revenge and go through into the next phase, but their rivals didn’t let them play their game.

Steven Gerrard’s men have played in a brilliant disciplined manner, closing the progress lines for the opposition with their dense lines and securing a 1-0 away win which made it 4-2 on aggregate in their favour. This tactical analysis will show you how the visitors’ tactics overpowered the Portuguese side and managed to secure a spot in the next round.

Micael Sequeira set his side in the 3-4-3 formation with a lot of changes and variations due to their opponent’s setup. The main catalysts for them were their inside wingers – Francisco Trincão and Ricardo Horta who have played along Paulinho on the top. The midfield was held by Fransérgio and Palhinha (João Novais in the second half), while the danger from out wide was coming from the wing-backs Sequeira and Ricardo Esgaio

The away team’s coach went into the game with their usual 4-3-2-1 tactics which pointed out the wingers as the main threat for the opposing side’s goal. Ianis Hagi was once again the key man in creation and is the one around whom the whole gameplan was happening. He had attacking support coming from Ryan Kent and Florian Kamberi, whilst the central area of the pitch was controlled by the Steven Davis-Scott Arfield-Ryan Jack trio.

Braga’s ideas and lack of possibilities

Right from the start, it was clear that the home team will try to annul the opponent’s advantage created in the first duel which ended with a 3-2 win for Rangers, so they entered the pitch with attacking approach and possession-based ideas. It looked like Gerrard’s boys expected that to happen and they had a prepared plan on how to prevent them from creating numerous chances.

They sat down neatly in somewhat of a 4-3-3 block with intentions to transform into 4-3-2-1 or 5-3-2 depending on the actual situation. The main reason and benefit they get out of this setting were to disable progress play for Braga who tried to position their creative players in the gaps between the defensive and midfield line of the Scottish team. 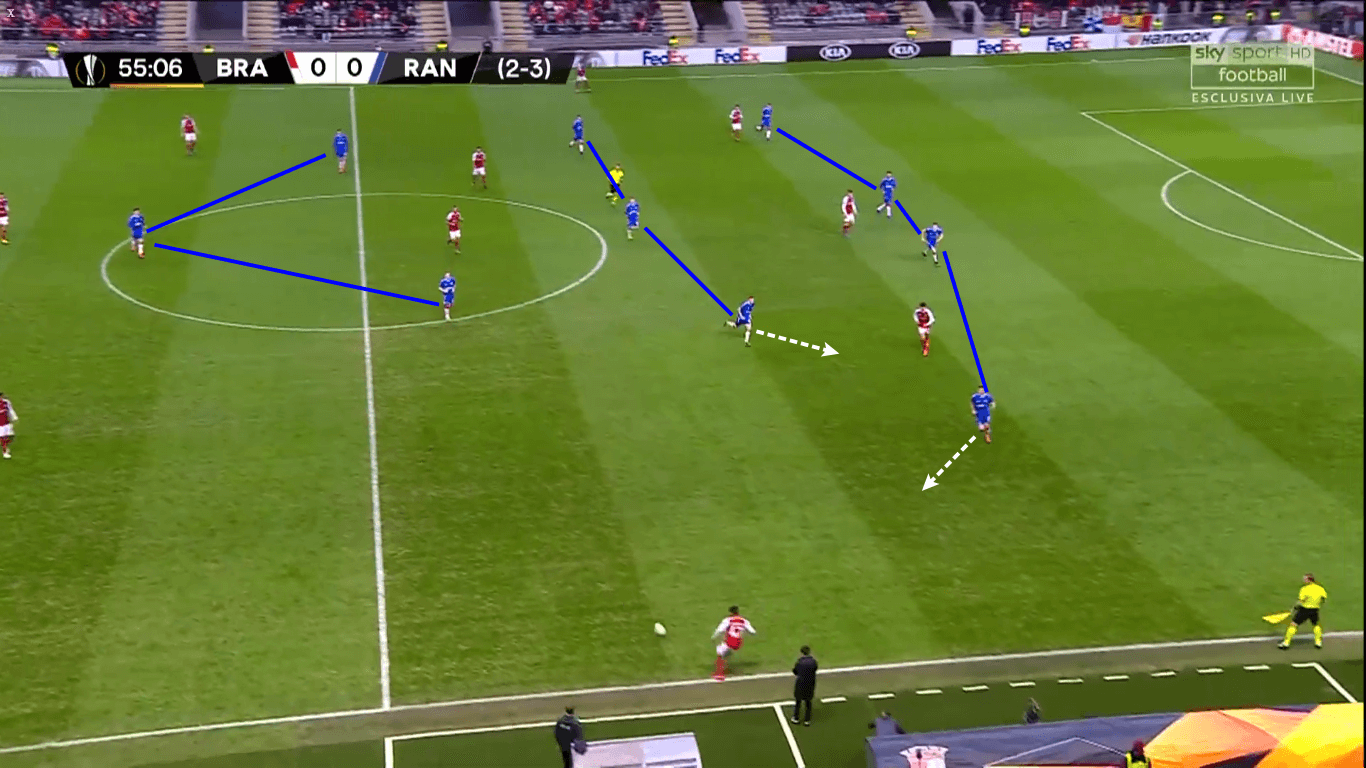 Their block was centrally oriented with a tendency to drop low if needed and it laid on the grounds of good communication between the wide defenders and mezzalas. Midfielders who were playing in the „eight“ positions were providing full-backs with defensive support guarding their backs if they came to press the player on the flank – which was the most common pressing-trigger for them – or just coming to help them double-team the inward wingers.

Braga was left with the restricted amount of possibilities because Rangers’ block was pretty tight and well-organised. Their only chance to get closer to the goal was through the flanks with fast play-switching passes or with deep balls over the opposition’s defence for the players who ran-in from the half-spaces. 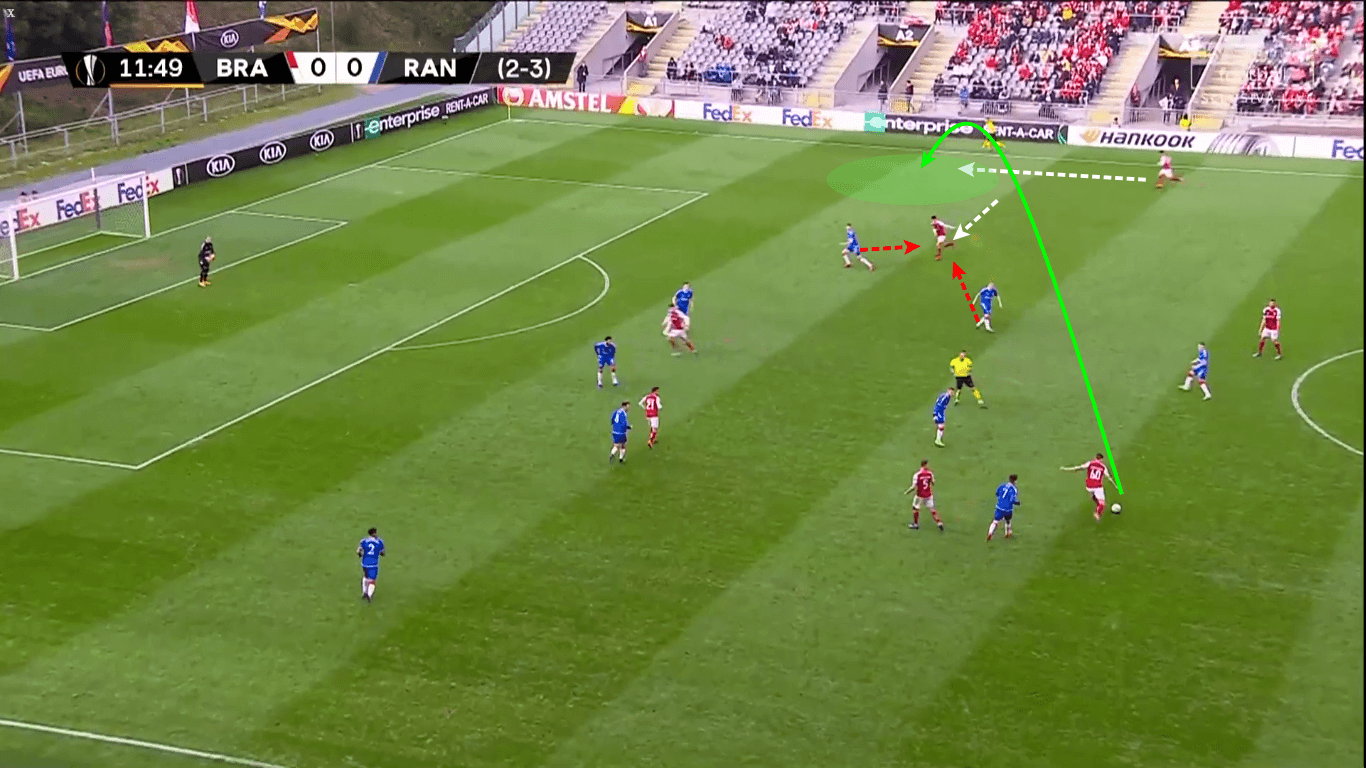 Here we see the first pattern of their attacks, with winger cutting inside to open up space for his wide teammate. Even though they managed to skip the action from time to time, Rangers’ players did great negative transition runs and were there in time to fill up the box and receive the crosses ready.

The other idea for them was to fast-break the opponent’s out of circling the block and they succeeded in doing that only for a few times. Trincão and Horta were the targets of those actions as they tried to attack the room behind the defenders’ backs after the long parallel balls coming from the wing-backs. 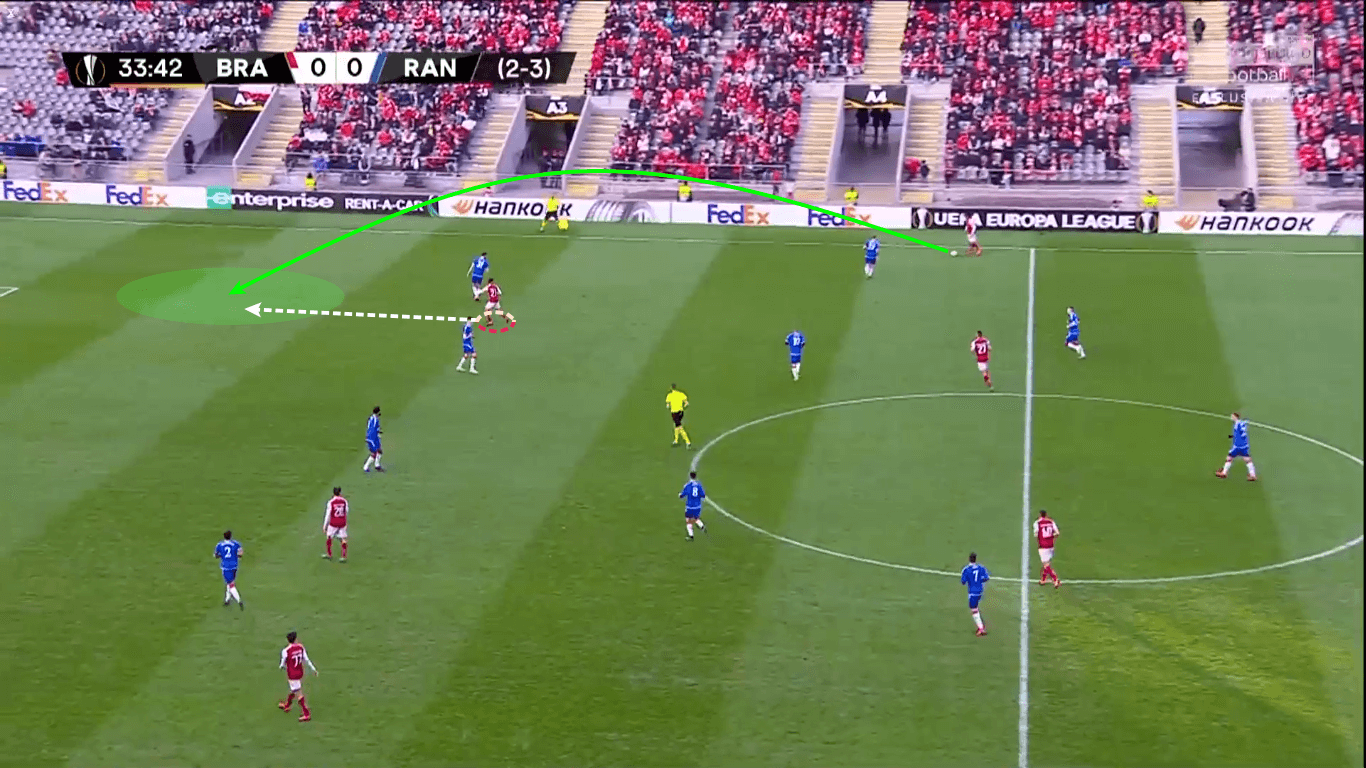 Those actions repeated throughout the whole duel and had not much of success due to a good space-closing from Rangers. Their disciplined out-of-possession play disabled the forward options for Braga through the ground and prevented them scoring.

The visitors came to Portugal with a great result from the first leg and tended to secure their spot in the next round by keeping it disciplined. They did a great job of expelling the players who could be the biggest threat for their goal out of the game and they did it by positioning their lines close to one another and communicating well.

Rangers’ off-the-ball structure was quite dense and was oriented to the side with the ball in it leaving the possibility of play switching open and relying on the fast side-to-side transformation. Their neat movements created a lot of „cages“ for Braga’s key chance-creators and disabled them of getting the ball in the touchy areas, forcing them to block circling as their only solution. 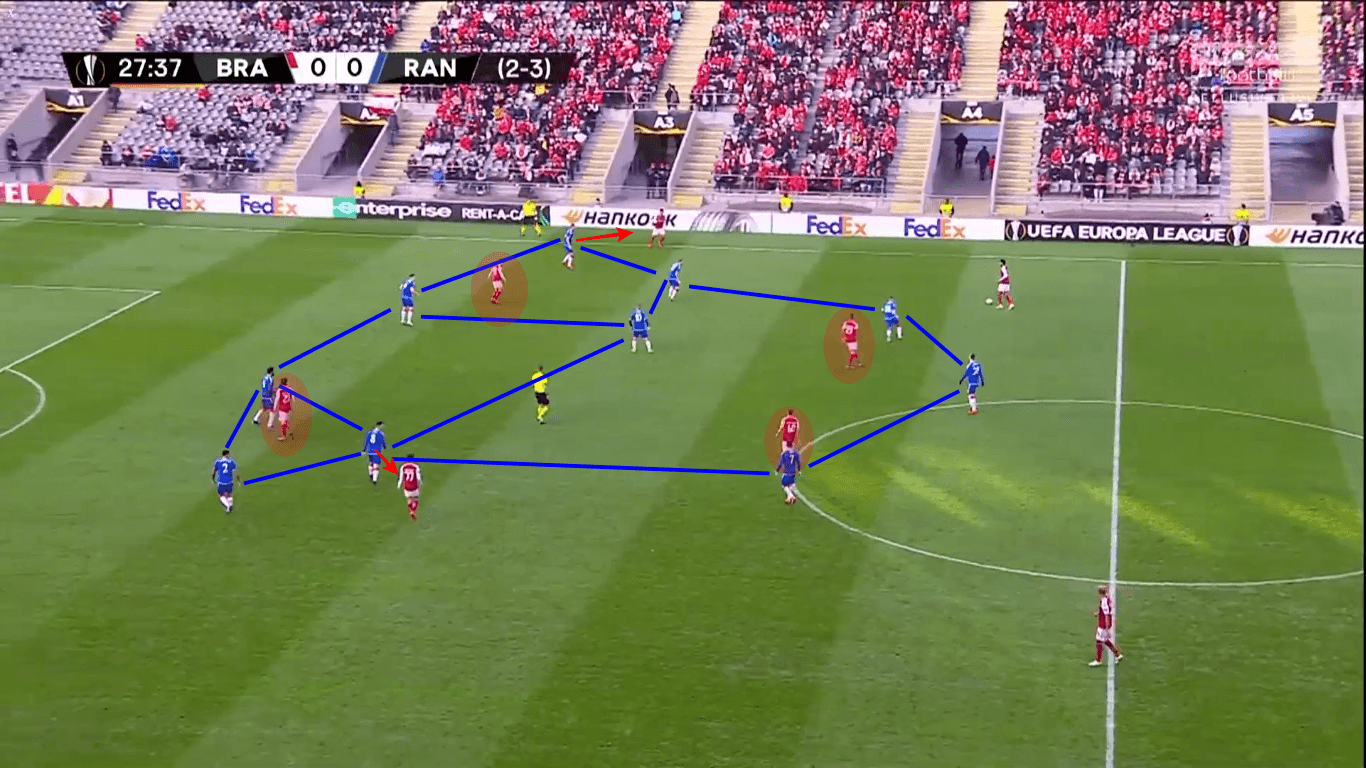 As we can see above, Rangers lines are positioned perfectly and that setup helps them close the potential passing lanes towards the middle zones. The widest players of Braga were often also having a direct marker next to themselves which left players with the ball with the backwards passes as only possibilities.

Midfielders of the away team have communicated pretty well with the defenders and came lower if needed to create a zonal-surplus over the hosts’ main catalysts. The „caging“ was the key to disabling Braga’s actions as they entirely closed down the through-the-middle play of the Sequeira’s boys. 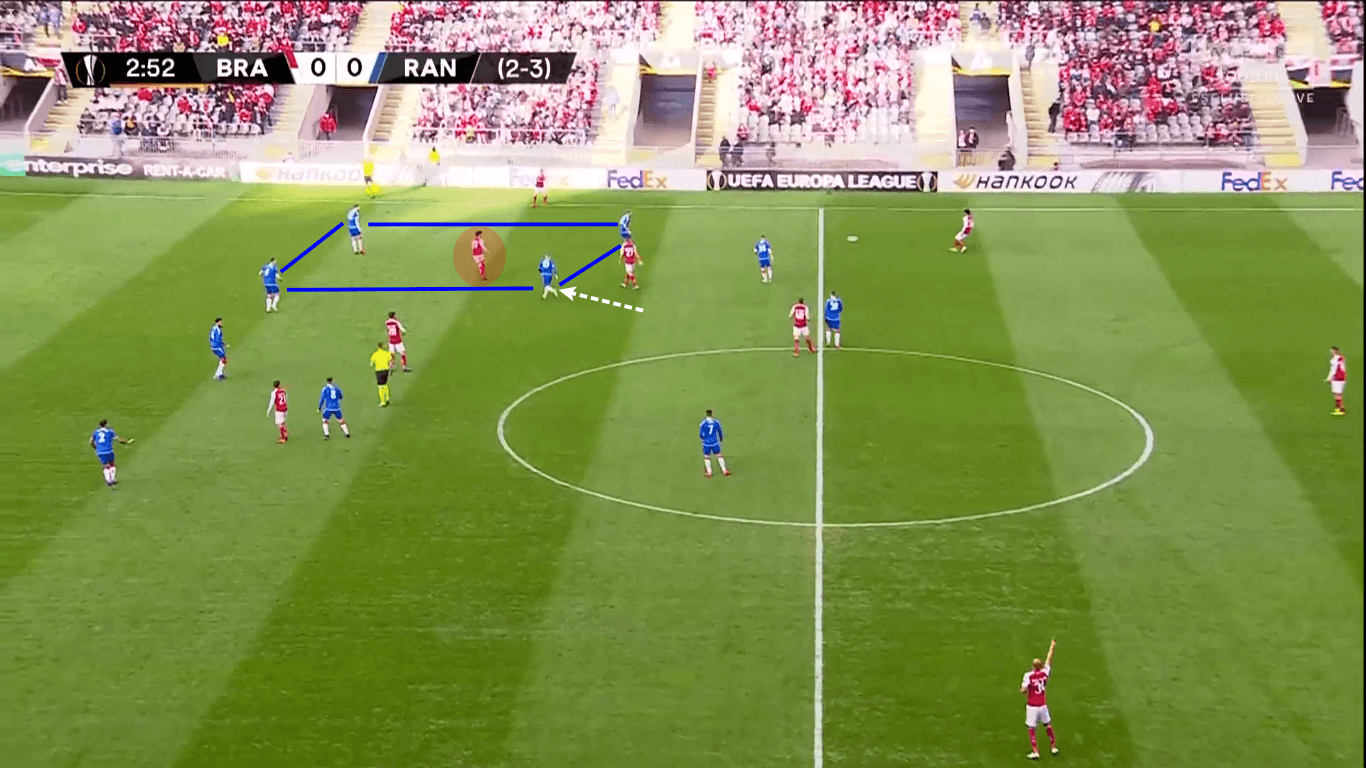 In the picture, the defensive and midfield line was staying very close to each other, and that often happened due to good cooperation led by the centre-backs who were telling higher players to drop or calling them to move left or right. That made the distance between the two crucial lines very small which made the operating space for Braga’s creators minimal and their actions were limited due to the good protection. 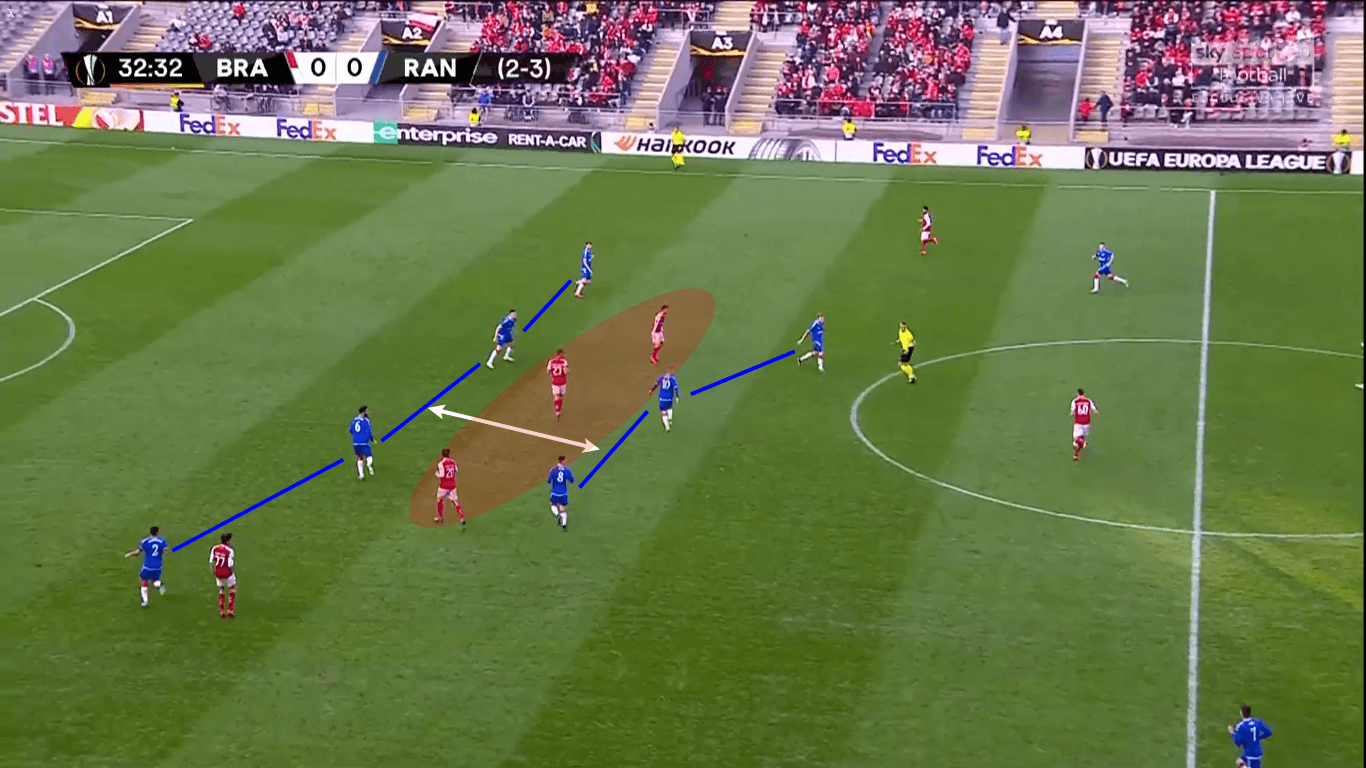 Rangers kept their lines tight both in the first and second half and after they scored the goal it was clear that they will secure the win. Gerrard’s gameplan was based on closing the gaps and they did it brilliantly by reducing the space with midfield line staying closer to the defensive one.

As we pointed out in the analysis, the visitors relied mostly on their out-of-possession structure which led to them creating most of the chances (and, finally, scoring) from the good transitions and transformations from defence to offence.

The main man in their offensive actions was the Romanian youngster Ianis Hagi who was the most concrete player of their team and so was the biggest threat for Braga’s goal. Positioning in the half-spaces, he created a lot of good situations for his side mostly with run-ins from those areas, but also with passing after he got the ball in those zones while in first stages of transition. 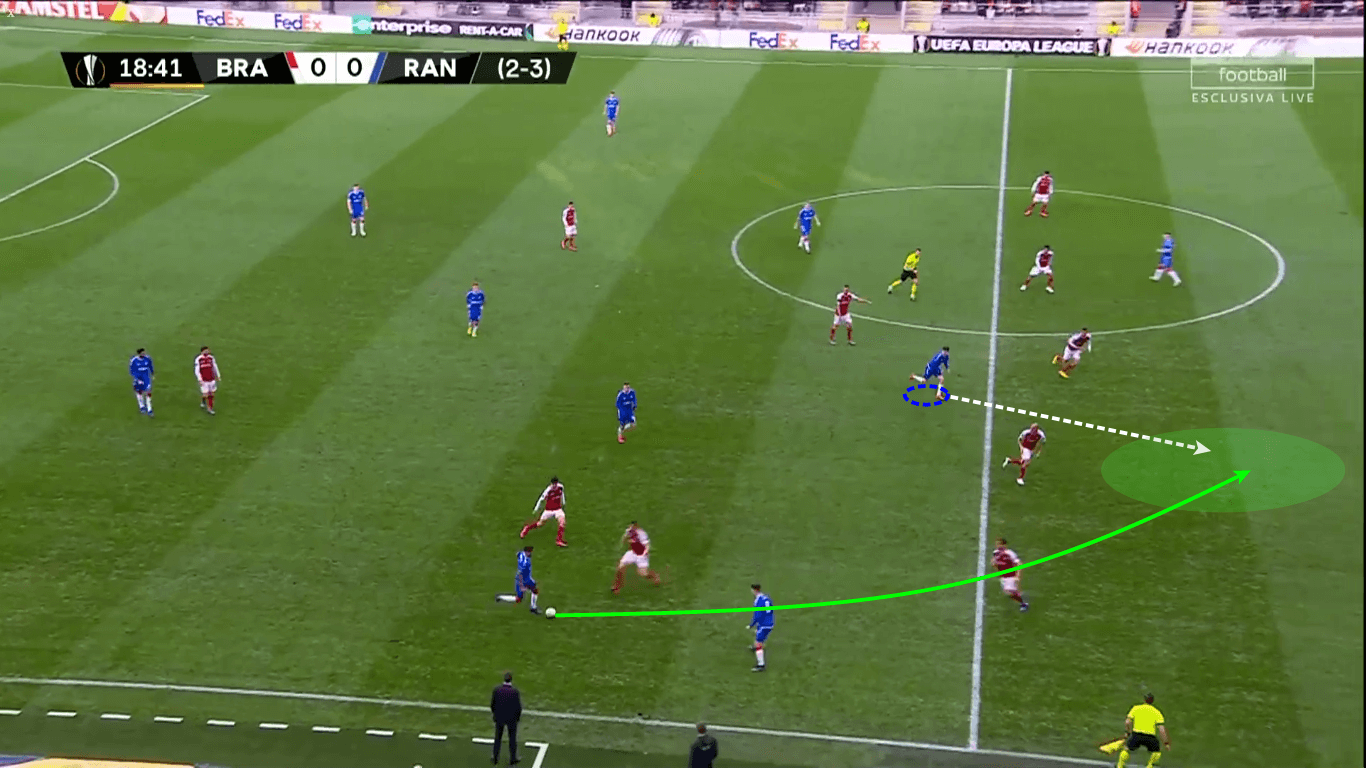 Above we can see the most common action Rangers repeated throughout the duel with their number seven in the inner-corridor attacking the depth after the parallel pass from the wide position. Hagi had a pace advantage over the slower centre-backs of the home team and that created a lot of problems for them.

Similar situations happened closer to the central corridor of the pitch and were orchestrated by Kamberi’s movements. The striker of Gerrard’s team dropped lower from time to time opening up the run-in lane for the Romanian who exploited the free room out of his usual positioning. 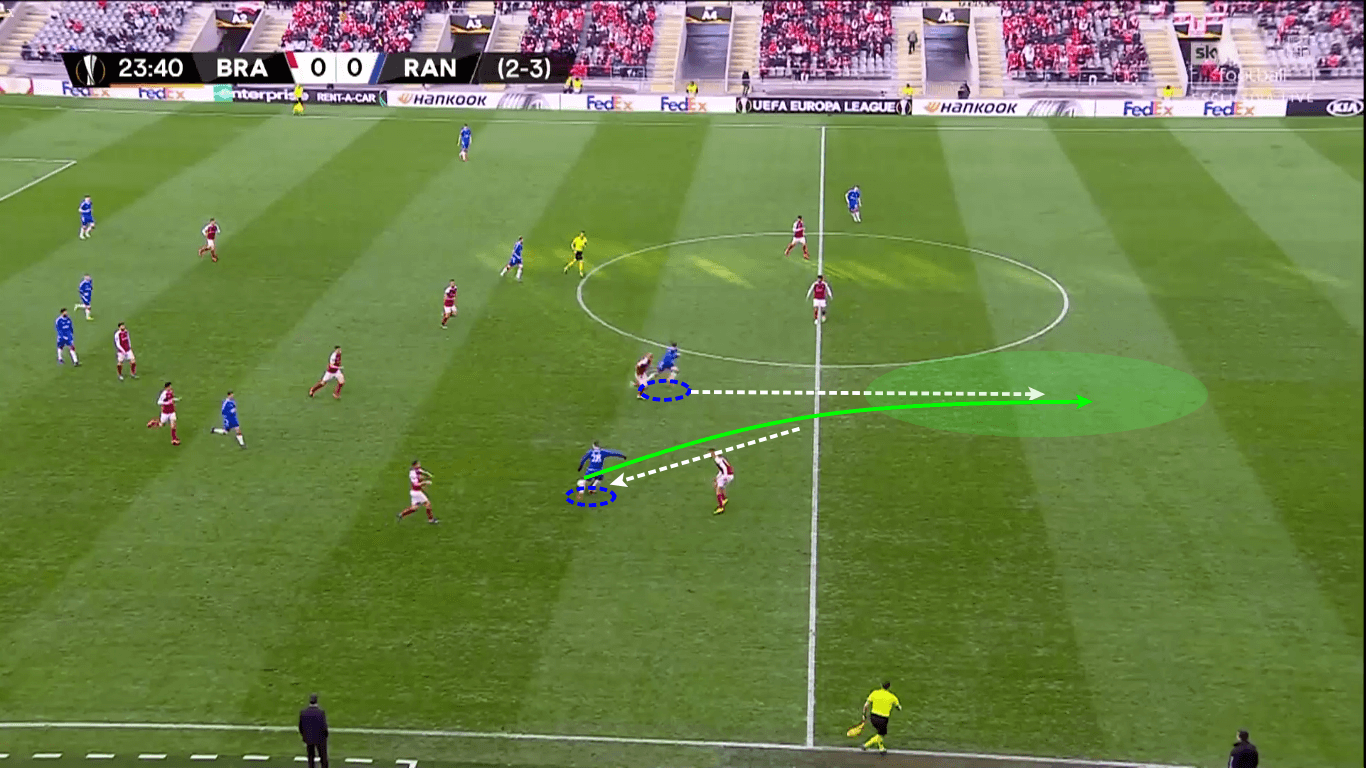 Hagi wasn’t the only player attacking those corridors as the same did Kent and the midfielders, but he was the one after whose runs Rangers got into the best chances. Transitive actions relied on the fast-forward moving from the attacking line and when the ball came to the player who attacked the free space, he almost exclusively had support on the opposite side which supplied him with possible pass-option.

In the action leading to the only goal, Hagi’s transitive role happened in the lower zone as he was the mediator between the first pass and the chance setup. He got the ball in the gap between the lines and supplied Kent with it by sending it over the defence in the similar manner as he was time and again supplied in the earlier stages of the game. 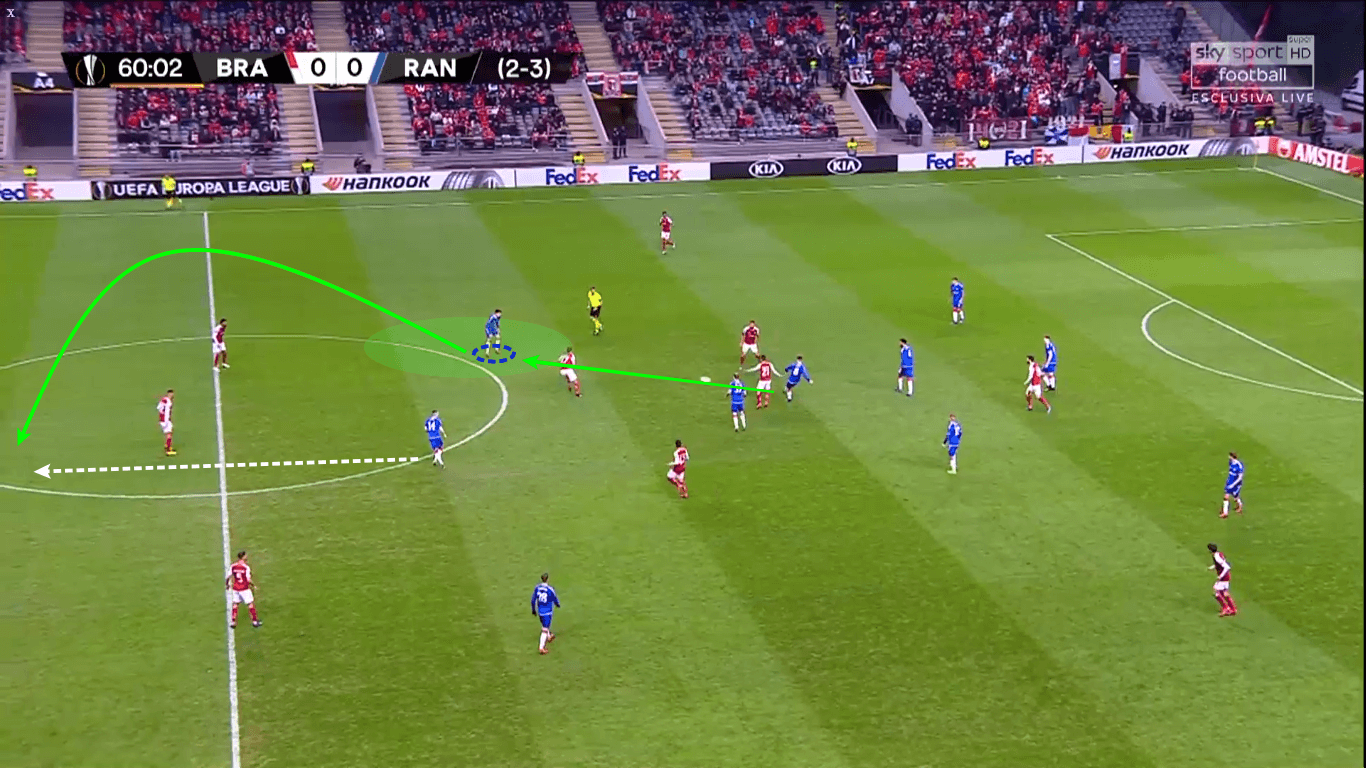 Those situations also happened a few times in the first half and a few times before the goal but better finishing and decision-making lacked. Hagi’s in-between play secured them a win and got Rangers into a lot of dangerous situations in front of Braga’s goal, so he can be pointed out as the key guy for the going through the next phase.

This analysis has shown that Steven Gerrard’s men were prepared for the challenges they had in Portugal, so they managed to disable Braga’s passing game and keep them far away from creating a lot of goal threats. The main reasons Rangers succeeded in accomplishing their game plan were their good communication and discipline which set their defensive game on a world-class level.

In the next round, they could easily have a more difficult job, but if they continue playing this organised they could be the tough draw for most of the possession-oriented sides. Ianis Hagi has shown the world why is the next Romanian big thing, and the scouts in the attendance had a lot to see coming from him in this duel, and he will surely be the key man for Rangers in the top 16 stages.