The first knockout rounds of the UEFA Champions League are always hard to predict. The home teams feel the pressure to take an advantage into the away leg, whilst keeping an eye on the potential to be stung by the away goals rule. The away side look to find a balance between scoring an away goal and still being in the tie for the second leg on home soil. Sometimes it makes for fireworks, other times, it makes for a tactical stalemate.

That was the case on Wednesday night when Lyon took on Juventus at the Parc Olympique Lyonnais. Though the French side took a victory on the night, both sides set out in defensive systems making for a rugged, scrappy affair. The victory, however, gives Lyon something to hold onto when they travel to Italy in March.

In this tactical analysis, we look at how both sets of tactics cancelled each other out, leading to a low-scoring affair. We also provide an analysis of the system implemented by Juventus, which denied them the chance to score a valuable away goal.

Rudi Garcia set his team up in a structured 5-3-2 system which focused on condensing space in between the lines. The back five consisted of Marcelo, Jason Denayer and Fernando Marçal, who occupied the three centre-back positions. This trio remained narrow and avoided moving into the wide spaces by calling on cover form their wing-backs Léo Dubois and Maxwell Cornet. As a result, the defensive unit had cover in the lateral spaces as well as the half-spaces, which prevented overloads from occurring in opposition build-ups.

The midfield was made up of Bruno Guimarães, Houssem Aouar and Lucas Tousart. This rigid trio dropped into a contained shape when out of possession and was focused around protecting passing lanes through the midfield. Once in possession, Lyon looked to release the pace of Moussa Dembélé and Karl Toko Ekambi by playing directly in behind.

The visitors set up in a traditional 4-4-2 system. The heart of midfield was occupied by Miralem Pjanić and Rodrigo Bentancur. The pair worked in tandem, with the primary movement being Pjanić dropping to act as a single pivot and Bantancur advancing into half-spaces on the right-hand side. Paulo Dybala and Cristiano Ronaldo started as the striking duo. Their fluid movement was conducive to methodical build-up play, however, often resulted in a lack of focus in the final third as the paid had moved away from the central positions.

The tactical approaches from both sides is easily explained by looking at the metrics listed above. Both sides operated a composite system, with Lyon looking to play defensive, direct football. We can see this is supported by the numbers. Their PPDA was 16.52, showing their focus on containment and solidarity over pressing high. An average possession of just 3.72 also shows the desire from the French side to move the ball forward quickly rather than looking to build attacks using short passing. As a result, 13.27% of their passes were classed as long passes. If we compare this to their averages set this season, we can see Lyon made a conscious decision to approach this game differently, tailoring their tactics to combat the opposition.

In contrast, Juventus looked to play a possession-based game. Their approach was still a composite style of defensive short passing football. The Italians achieved a PPDA of 7.2, showing their desire to control the ball. They also averaged 6.08 passes per possession, which makes it no surprise that just 5.11% of their passes were long balls.

Looking closer at the passing maps, we can see how Lyon operated. The French side didn’t park the bus, instead, they held a medium line, with Marcelo in the centre marshalling it diligently. This positive line prevented Juventus from smothering them in long spells of possession, and more importantly, allowed the midfield line and defensive line to be as close as possible, without sacrificing the threat on the counter. If the line had dropped deeper, it would have forced the entire unit backwards, thus isolating the strikers. By holding a more aggressive line Lyon implemented structure without losing an attacking threat in transition.

Where most of Lyons attacks stemmed from direct passes, the turnovers in possession – as a result of the low-percentage long balls – posed little threat to the home side as their defensive transition times were minimal using this tactic. When the home side did see extended spells of possession, they moved their wing-backs wide and pushed them forward to support the attacks. Depending on the side, the striker made runs into the channel looking to disrupt the Juventus shape. Due to the hopeful nature of a lot of Lyon’s attacks, many resulted in failure, as the experienced Italian’s mopped up the long passes.

Above, the contrast in styles is immediately clear. In possession, Juventus used short passing at a low tempo to develop attacks, these were constructed through each phase of the pitch.  We can see above how heavily involved the defenders were in the possession cycles. Alex Sandro and Danilo advanced with the play and offered overlaps to their respective wingers. This often led to nothing, however, as the home side’s system prevented overloads by highly congesting the middle and defensive third.

The passing was short and deliberate, with player movements restricted to those instructed by the manager. This approach gave little room for creative expansion, which struggled against the robustness of the opposition.  More often than not for the away side, either the timing of the run was poor or the quality of the pass was lacking, which restricted them to an xG of just 1.16.

Out of possession – as is typical under Maurizio Sarri – Juventus were organised and tough. On turnovers of possession, they worked quickly to transition into a 4-4-2 shape behind the ball. It was from this position they pressed aggressively in the middle phase to recover possession. This approach prevented their opponents from counter-attack opportunities as they were rarely caught out of position in defensive transition.

As mentioned, the visitors were uncharacteristically poor. Their movements looked restricted and too meticulous to be creative and dynamic enough to penetrate the opposition shape.

Above is a scenario that occurred frequently on the left flank. Adrien Rabiot had naturally pulled inside, where he is more comfortable. This left Juventus unbalanced and narrow, which Ronaldo sought to resolve by dropping into the wide left position.

In doing so, he created a large distance between himself and Dybala, who failed to move in conjunction with Ronaldo, leaving a large gap between the pair. With the pass into midfield now becoming risky and no option over the top, the only feasible option for Sandro was to recycle possession.

Alternatively, if Dybala had followed his strike partner, the pair could have moved in synchronicity to create an opportunity to penetrate. We can see above from Ronaldo’s movement that he’s pulled a centre-back out of his desired narrow positioning. This has opened a channel in the half-space which Dybala could have exploited with sharp movement in behind – as demonstrated by the red line. Instead, though the pair consistently operated in isolation which allowed Lyon to remain comfortable in their shape.

The second missed opportunity came from a reoccurring sequence that developed on the right flank. In possession, when moving the ball from left to right, Juventus had a short window, where, if they moved the ball quickly enough, they could create a 2v1 situation.

Notice above how Danilo is set to receive the ball from his centre-back. This leaves the Lyon wing-back momentarily isolated, caught between advancing onto the Juventus full-back or containing the space to wait for support. 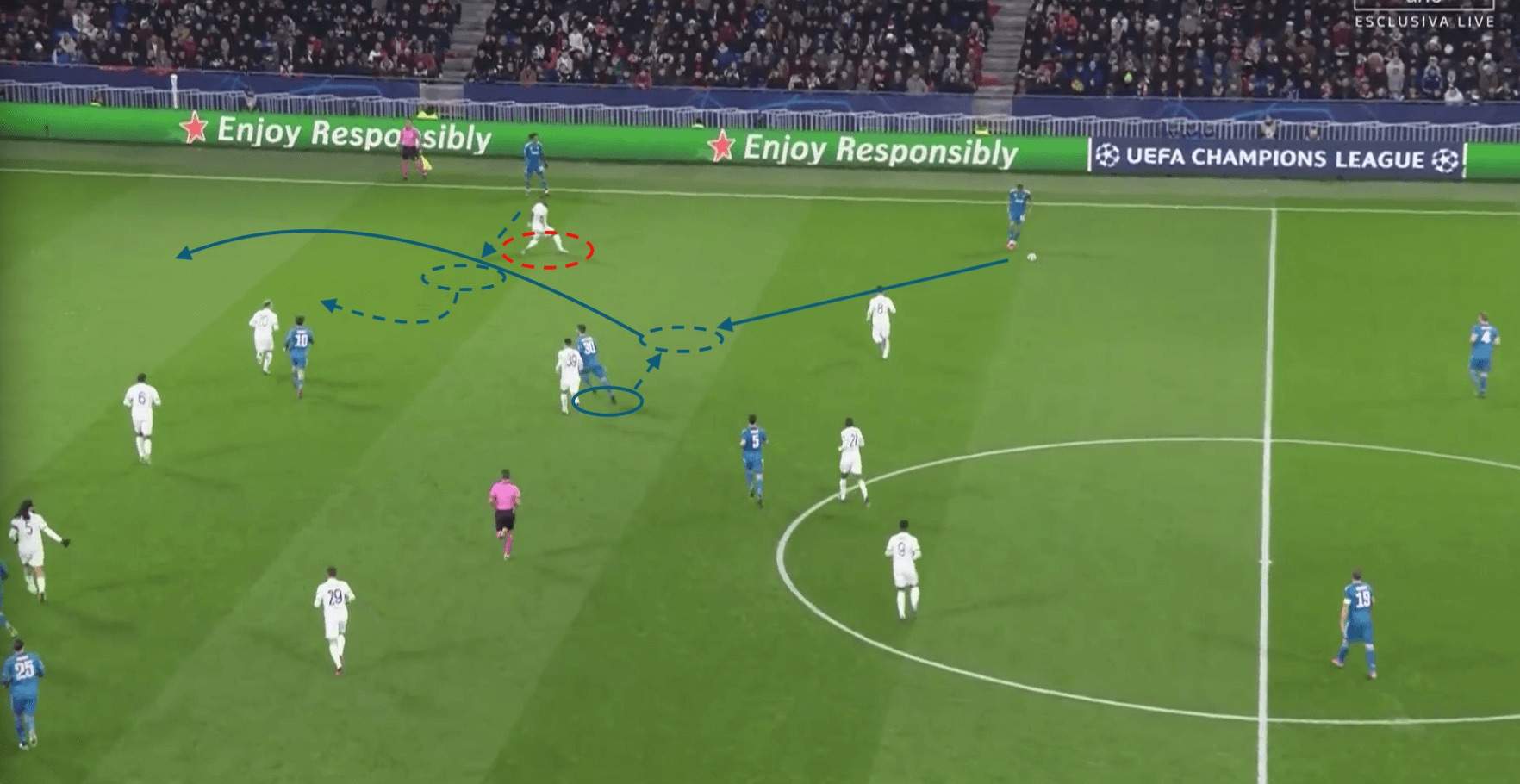 Occasionally, Cornet got it wrong, which Juventus failed to exploit. We can see from the red highlight that the wing-back’s positioning is incorrect. By taking a step out towards Danilo he’s sacrificed space in behind, which Juan Cuadrado could exploit by moving in off the channel. With a few crisp passes, Juventus could have developed a dangerous position down the right flank, in behind the stranded wing-back.

Instead, the passes were often too slow and the movement was either not timed correctly or not intended to penetrate, being more inclined to move towards the ballplayer. As a result, Juventus rarely utilised this small window of opportunity and instead recycled possession endlessly.

Juventus were poor. The tactical framework laid out by the coach was restrictive and unadventurous, and within that, player quality was well short of the required standard to win away in the Champions League. On home soil, there will no doubt be individual improvements, but the Italians desperately need to realise there’s a middle ground between full-throttle and playing with the hand-brake on.

Lyon’s gameplan worked. They stifled their opponents and managed to knick a goal which now gives them something to defend. They’ll be ready for a tougher fixture in March, but if they can keep their defensive structure as organised as they did on Wednesday, there’s no reason why Lyon can’t stage an upset.