Bayern Munich followed up their midweek demolition of Tottenham Hotspur by falling to a 2-1 loss to TSG Hoffenheim at the Allianz Arena. Niko Kovac’s side, perhaps tired after their European exploits, looked dull and lethargic and were aptly punished by an organized Hoffenheim side.  Sargis Adamyan scored a brace for Hoffenheim which made Robert Lewandowski’s header nothing but a consolation goal for the home side. This tactical analysis aims to look at the tactics employed by both sides and the reasons behind the result. 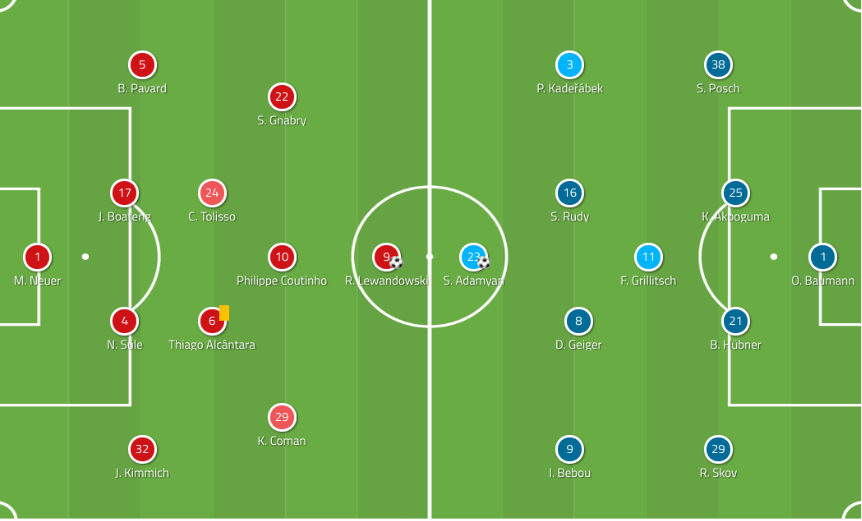 Bayern lined up in a 4-2-3-1 formation. Jérôme Boateng started with Niklas Süle in defence with Joshua Kimmich and Benjamin Pavard playing as the full-backs. The midfield duo comprised of Thiago and Corentin Tolisso. Philippe Coutinho played in the number ten role behind the in-form Robert Lewandowski. Serge Gnabry and Kingsley Coman played on the wings for the Bavarians.

Hoffenheim opted for a 4-1-4-1 formation. Kevin Vogt’s absence meant that Kevin Akpoguma played along with Benjamin Hübner in defence. Robert Skov continued in his new role at left-back with Stefan Posch on the opposite flank. The impressive midfield trio of Dennis Geiger, Sebastian Rudy and Florian Grillitsch started together with Ihlas Bebou and Pavel Kadeřábek on the wings. Adamyan led the attack.

The first half went as one would expect it to in the Allianz Arena with Bayern Munich dominating possession and playing a high defensive line while Hoffenheim were pinned back in their own half. This trend continued in the second half and Bayern’s possession statistics read that they had 65 percent of the possession and made 690 passes compared to Hoffenheim’s 388.  However, this possession was of no avail as Bayern were extremely wasteful with their passing, looked uni-dimensional and were ultimately picked apart by a clinical Hoffenheim side. Bayern’s primary tactic was to have their wingers make runs in behind Hoffenheim’s full-backs and cross for Lewandowski. Hoffenheim looked quite vulnerable in this regard with Gnabry and Coman finding space behind the defenders. Bayern were let down by their inaccurate through-balls which either failed to break the lines or find their target. Even the likes of Thiago were restricted to recycling possession

Hoffenheim have to be given credit for their narrow positioning in the centre of the pitch and their efforts to press Thiago and Tolisso when they had the ball. Hoffenheim’s first goal came from such a press when the ball was nicked from Tolisso and Adamyan was found in space. The Armenian cut inside and shot  past Neuer to open the scoring.

Hoffenheim’s game plan was focused on letting Bayern have possession of the ball in non-threatening situations.  The forwards in Adamyan and Bebou did not bother pressing too high up the pitch but were tasked with marking the central midfielder and full-backs. Without confining themselves too narrowly, Hoffenheim managed to restrict Coutinho’s movements and kept Bayern’s wingers isolated. The visitors were lethal on the counter.

Bayern’s issues on the left-flank and change of system

Bayern’s left-hand side was hampered by the lack of a natural left-back. Injuries to David Alaba and Lucas Hernandez meant that Pavard was selected at left-back. The Frenchman struggled to get forward and assist Coman which allowed Hoffenheim to outnumber Bayern in the wide areas. Alphonso Davies might have been a better pick given his natural preference for the left flank and higher attacking output.

Bayern, after going a goal down, switched to a 3-4-3 in the second half with Thomas Müller and Ivan Perišić  entering the fray. Müller, playing on the right flank, did cause some problems and assisted Lewandowski’s  goal with a deft lob. It was only when Bayern dealt with being outnumbered in the wings that they managed  to cause Hoffenheim trouble.

Hoffenheim’s best players were Adamyan and Grillitsch. The Armenian striker took both his chances with aplomb and made a great effort to cover the flanks and contribute to the defensive work. Grillitsch was instrumental in shielding the defence and shifting the ball from defence to attack. The Austrian is growing in stature with every game and on this occasion completed 31 passes, attempted six tackles, made two blocks and one clearance. His all-action approach and energy was important in keeping Hoffenheim defensively focused.

The result was a quintessential counter-attacking performance from Hoffenheim. Recognizing that a side visiting Bayern would not have much possession, Alfred Schreuder set up his side to minimize the influence Bayern’s wingers could have by having their forwards drop deeper to help out defensively and run the channels. Hoffenheim actually had more shots on target than Bayern, with five shots, illustrating how well they kept Bayern from finding space for shots and incisive passes. The visitors collectively attempted nearly double of Bayern’s tackles, making 35 and also 30 clearances. It was a brilliant collective effort from attack to defence without being afraid of playing some cohesive football.

In conclusion, it was an impressive win for Hoffenheim who were clinical with their finishing and took their chances well. Bayern, on the other hand, were slow off the blocks and lacked creativity. For a side expected to compete in all the tournaments they are in, fatigue cannot be used as an excuse for Bayern’s poor performance. The Bundesliga title race is the most exciting it has been in recent years and as this analysis has shown, Bayern Munich can be toppled from their throne.