According to the head to head statistics, Borussia Dortmund were the major favourite for the Bundesliga game against SC Freiburg due to their unquestionable dominance. However, Freiburg now a much different team as Christian Streich’s men have won four games in the last six matches. As proof of that, they managed to score two goals against Dortmund whilst they were not able to do that in the last eight games in their stadium against the black and yellow.

On the other hand, Borussia Dortmund have been in a bit of trouble in their recent matches, although they finally managed to record a victory against Slavia Prague in the Champions League which was highly important as they were on a three-game drawing.

This tactical analysis will discuss some of the major trends in the teams’ tactics in this clash. The analysis focusing on revealing some patterns of play that the teams displayed on Saturday afternoon. 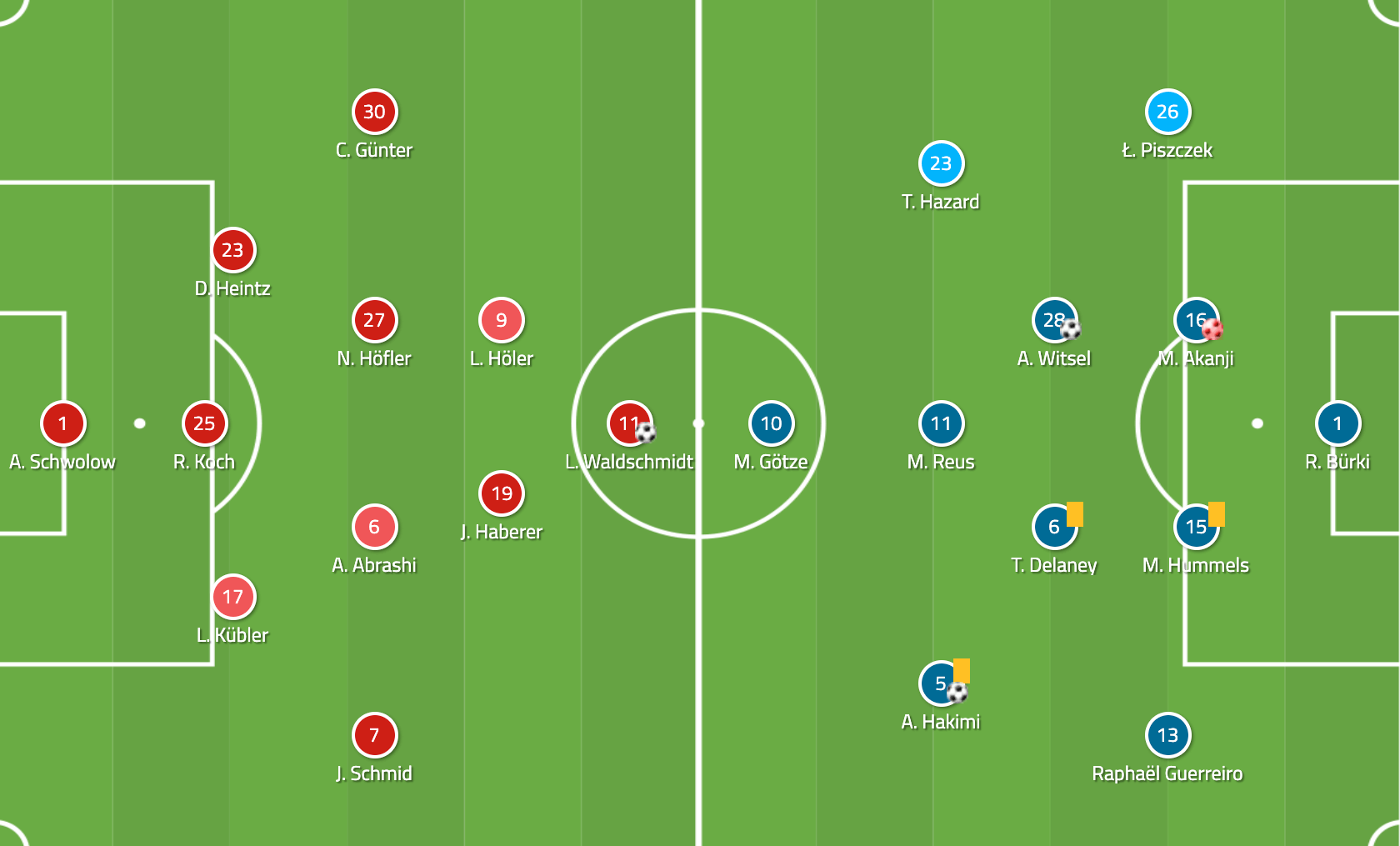 There were only two changes in Freiburg’s starting XI, however, the formation was still the usual 3-4-2-1. Compare that to the last game, Lukas Kübler replaced Philipp Lienhart on the right side of a three-man defence. While upfront, Nils Petersen was benched thus Luca Waldschmidt played instead of him.

Favre lined up his team with his favoured 4-2-3-1 shape but due to the Champions League, there were a couple of changes in the team selection. Since Paco Alcácer is off from duty due to his injury, they are a bit limited in that position. Mario Götze played through the middle with Marco Reus sliding into the attacking midfielder position to occupy the number ten role.

On the wings, Achraf Hakimi remained in front of Raphaël Guerreiro in the left-winger position as he did against Slavia Prague. This also meant that Julian Brandt got some rest and also Jadon Sancho who was replaced by Thorgan Hazard. However, Achraf and Hazard frequently swapped positions throughout the game.

Freiburg out of possession

Although Freiburg showed high pressing in the opening minutes, Dortmund dominated the ball with 62% of possession overall. As Freiburg only used the high press for a few minutes in the first half and after half time that was mainly due to the conceded goal in the first half. Other than that, they were a bit more cautious, as they formed a medium to low block in a 5-4-1 defensive structure. They looked to force the opponent wide and frustrate the opponent, closing down the passing lanes and pressing back passes.

The image above also shows us how Dortmund were able to exploit Freiburg’s man-orientation. As the centre-midfielders often used tight man-marking, they could be manipulated more easily. For example, Amir Abrashi stays deep to mark Reus, however, in return it created a space in the half-space in front of the Freiburg’s second line. Therefore, even though Achraf and Guerreiro got closed down by Schmid and Haberer, Guerreiro was still able to access the half-space.

In this section of the analysis, we will look into some principles of the Dortmund attacking play. One of the major parts of the Dortmund playing style is their possession play. It is clear that Favre’s side use a lot of movements and overloading of certain areas to create quick passing combinations. However, they also use overloads to drag the opposition’s shape towards the flanks and exploit that stretched shape. In this situation below, we can observe how Dortmund try to draw the opponent to one side and create space.

After Freiburg closed down the right-hand side of the pitch, Dortmund use a switch of play to exploit the space on the far side which was, by the way, constant pattern in their play. They often tried to play the ball to the far side meaning they involved their full-backs a lot in their possession play. In this game, the focus was on Guerreiro. 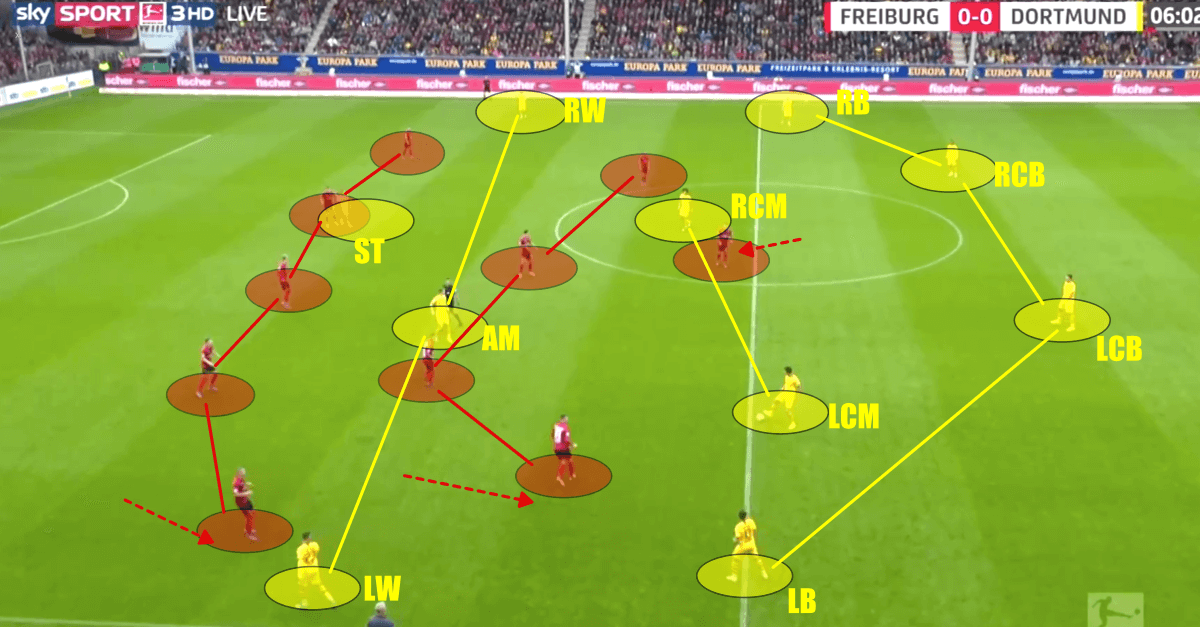 The interesting part comes after Hakimi received the pass on the right flank. The principle is to always offer options to the ball carrier thus right after the switch of play, multiple teammates immediately started to shift there to create a play. Firstly, the striker, Götze drifted over, receiving the ball from Achraf. After he passed it back right away, Götze threatens with a run behind the defence. Also, Łukasz Piszczek pushed forward next to the touchline. These two actions made the Freiburg defence shift over to the right-wing. 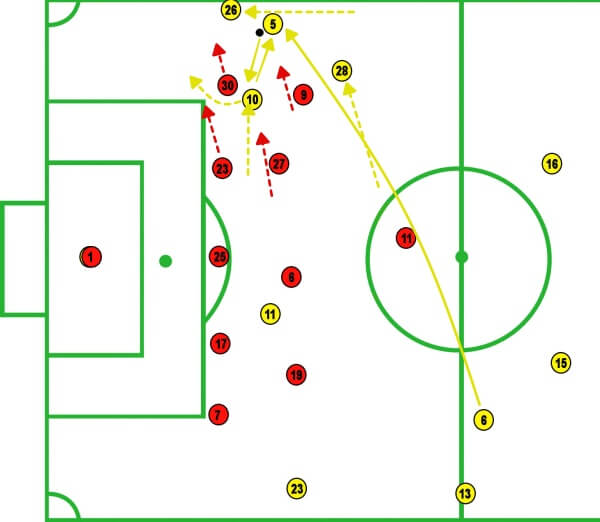 Alongside Götze and Piszczek, Witsel also joined to support which was useful because Hakimi now had an option towards the central zones, more precisely, to the half-space. Since the area was congested, Achraf played the ball to Witsel who had two options, namely Reus and Thomas Delaney. Thus, in the end, Dortmund first used a switch of play to change the point of the attack, then dragged the opponent there and finally, used the midfielder to access the middle where space had been created due to Freiburg’s shape being stretched horizontally.

This shifting dynamic was evident in other situations. For example, in this instance, they used rotation to establish good passing options for the ball carrier. Hazard started the movement by dropping deep to offer a diagonal option right behind the Freiburg second line. Götze moved outwards to offer a vertical option next to the touchline. Then at the same time, Reus pushed forward to occupy the centre-forward position in the middle.

The way that Dortmund play, namely to overload the ball-near side to offer multiple passing options also drags the opposition defensive shape towards that area which can be difficult to progress through if the opponent closes down well. However, Dortmund also solved the problem in such situations where the opponent is blocking the vertical options.

The below example shows us how Dortmund bypassed the lines by using the third man concept. Höler is pressing the ball-carrier and blocking the passing routes towards Reus and Achraf. Therefore, theoretically, Witsel had no choice except to recycle through the backline. However, Delaney also moved there, he offered a diagonal option which also outplayed the pressure and opened the way to progress up. As Delaney is positioned sideways, he was able to provide an angle to receive the ball.

As this analysis has shown, Borussia Dortmund dominated the game and were able to create long possession phase at the opponent’s half but struggled to create quality chances. Due to SC Freiburg’s man-orientation, Dortmund could manipulate the opponent better and despite forced to the wing they could access to the centre.

Having all said, Freiburg’s 5-4-1 defence worked very well, especially around the penalty box. Need to remember the fact that both Borussia Dortmund’s goals were a bit lucky score. With this draw, they collected an important point and remained in the top five of the Bundesliga table.

On the other hand, Favre’s system still not exceeded the full potential which cost them a lot as they only eight after seven games, however due to the fact that the race in the top half of the Bundesliga is quite intense. Only four points gap between them and the leader, Borussia Mönchengladbach.