This season promised to be one of change for fans of Serie A. Whilst Juventus still went into the season as firm favourites for the first time they would be moving forward under a new head coach. Massimiliano Allegri made the decision at the end of last season to move on and take a break from top-flight football. The Juventus board immediately turned their attention to the former Napoli coach Maurizio Sarri who was, of course, in charge of Chelsea at the time. Sarri made the move to Turin and many fans of the Italian game were interested to see whether he would immediately install his 4-3-3 model at the club.

Juventus, however, were not the only top Italian side who were coming into this season under a new coach. Another former Chelsea coach would be in charge at Inter Milan with Antonio Conte coming in to take charge. There was no doubting the tactical model that Conte would install with the former Italian national team coach being firmly embedded in his 3-5-2/5-3-2 model. Going into this match the new coach and system was obviously working for the Milan side as they had won all six of their league matches to date.

In this tactical analysis, we will examine the tactical talking points in this match that led to Juventus coming away 2-1 winners. This was largely down to an unexpected structural switch from Sarri. 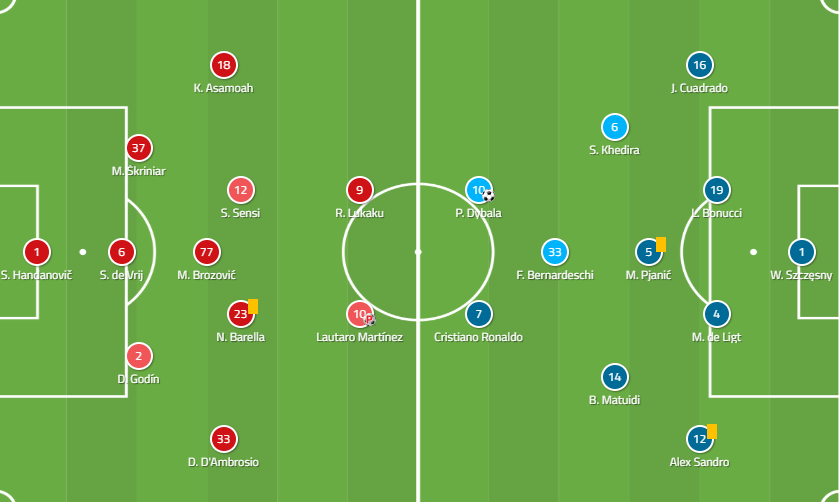 There was no surprise from the home side as the lined up in the 3-5-2 structure that we expected. The Uruguayan defender Diego Godin has settled quickly into the team since his summer move from Atletico Madrid. The midfield block is especially impressive for Inter with the former Sassuolo midfielder Stefano Sensi looking extremely strong in the opening matches of the season. In attack, we have seen Lautaro Martinez quickly establish himself as the first-choice partner for Romelu Lukaku. 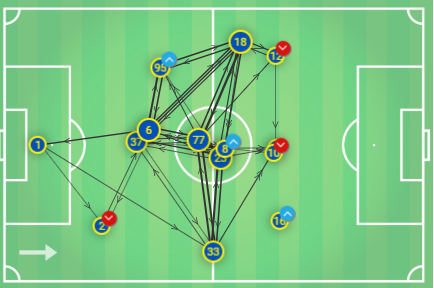 The main tactical issue that faced Inter in this match is evident from this pass map. The three midfielders spent the majority of the game on the same line as one another with little depth. This prevented Inter from progressing the ball comfortably and allowed Juventus to occupy spaces to either side.

Maurizio Sarri sprang a surprise by using the Italian international Federico Bernardeschi in the ’10’ role. This saw a diamond in the midfield with Cristiano Ronaldo and Paulo Dybala playing in the attack ahead of Bernardeschi. Miralem Pjanic played as the ‘6’ at the base of the midfield. 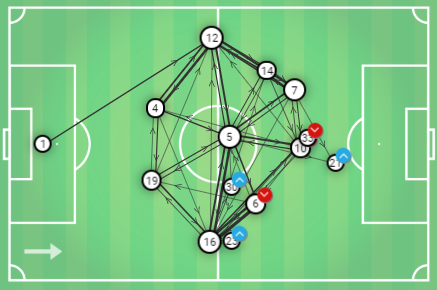 The passmap from Juventus shows how much better they were in occupying space across the pitch.

By moving Bernardeschi inside to the ’10’ position we saw Juventus immediately put stress on the Inter defensive structure when the away side were in possession of the ball. The positioning of Bernardeschi forced Inter to make a positional switch in order to cover this area. They ended up dropping one of the three central midfielders into a deeper position but this then disrupted their capacity to press the ball.

By positioning Pjanic at the read of the diamond and Bernardeschi at the top Juventus game themselves creative options through the centre. The sides of the diamond were occupied by Sami Khedira and Blaise Matudi. These selections were likely deliberately made to allow Juventus to press proactively from the midfield. As Inter would be looking to build up through their midfield three Khedira and Matuidi would press from the outside that would then funnel the Inter attack through the centre.

In possession, the passing ability and creativity of Pjanic along with the movement from Bernardeschi allowed the ball to be progressed efficiently through the Inter midfield and into positions from which Juventus were able to threaten the penalty area.

Movements from Bernardeschi allowed Juventus to move the ball safely and securely forward. We see that above as the Italian international has dropped from in front of the Inter defensive line into space in front of the midfield line. At no point did any Inter player track the run as Bernardeschi dropped towards the ball. These movements in and out of pockets of space from the Juventus players were often key in allowing the away side to play in pockets of space in the final third.

Normally, we would expect a Sarri side to play in a 4-3-3 system with no occupation of the 10 space. He is also not widely seen as a coach who is willing to make tactical changes to his normal game model.

As we saw the game progress Conte started to be more proactive out of possession in trying to prevent Pjanic from controlling the match from the ‘6’ position. Brozovic, in particular, would move forward from a deeper position to try to prevent the ball coming forward. THis simply opened up space that Juventus were able to take advantage of as they played forward into the final third.

Juventus out of possession

With the central orientation of the midfield diamond, it is safe to assume that Maurizio Sarri was keen to deny Inter the space centrally that they would normally occupy in order to play through their opponents. The wingbacks in the 3-5-2 for Inter Kwando Asamoah on the left and Danilo D’Ambrosio on the right are functional and strong in the defensive phase but neither is all that strong in the attack. Juventus, therefore, set out to occupy the centre of the field and force Inter to look to attack and progress the ball through their wingbacks.

We can see an example of this defensive shape above. As neither of the two forward players look to press immediately in the defensive phase and they allow the Inter players to circulate the ball across the backline. The positioning of Berbardeschi prevented Inter from being able to pass forward to Marcelo Brozovic, who typically played centrally in the midfield three for Inter. Sami Khedira and Blaise Matuidi then covered the other two midfielders of the home side.

This led to Inter either having to accept the wide pass that Juventus appeared to want them to make or play more direct up and into the feet of Lautaro Martinez and Romelu Lukaku.

If Inter were in possession of the ball along the edge of their own penalty area then we would see Juventus look to press in order to disrupt the build-up and try to force a quick mistake. Normally with 3 defenders against 2 attackers, we would see the ball circulated across the defensive line until the free man could take possession. The ball could then be cleanly progressed forward. With Bernardeschi playing centrally though he moved to join the press when the situation arose.

This prevented Inter from finding the free man and once again prevented them from cleanly and safely progressing the ball forward.

As mentioned above the Italian international midfielder Stefano Sensi has made an excellent start to his Inter career. Indeed, he tends to be the player that Conte’s side turns to in their attacking phase. In this match, however, Sensi was forced off through injury on the 33rd minute and Inter looked poorer in the midfield without him.

Even as Inter moved their wingbacks into high positions when they were in possession of the ball they did not mirror this attacking intent with their midfielders. You can see this above with the ball being set back to Kwando Asamoah, who has momentarily swapped positions, there is a diagonal pass on from this area into the pocket of space that I have highlighted. That space, however, should not be filled by the striker as it would simply allow the Juventus defensive line to step up and cut the available space. Instead, the midfield three would sit in a relatively static line and circulate the ball across the field without any real penetration.

This lack of attacking intent from the midfield of Inter was likely a deliberate act from Conte to take away the threat of Juventus on the counter. Still, as the home team and after their impressive start to the season we would have expected Inter to be more proactive in possession.

Antonio Conte is seen as a cautious coach so his approach with the midfield in this match should come as no surprise. What did surprise, however, was the proactive approach of Maurizio Sarri and the decision to switch to a diamond in midfield was the key tactical point in the match. The occupation of space for Juventus was far superior and this was clearly seen as the match progressed.

This will go down as the first point this season when Juventus fans saw the approach of Sarri as one that could yet see the title retained in Turin.