Ahead of this match, Eintracht Frankfurt got 10 points out of their first six matches while Werder Bremen had seven points after the same amount of Bundesliga games. Usually, you expect both teams to get more points out of the first matches. However, Frankfurt currently live through a change as they sold several important players including Luka Jović and Sébastien Haller and brought in new players.

On the other side, Bremen have, at the moment, very important players who are injured. In light of these factors, the start of this season was for these two teams quite acceptable.

In this tactical analysis, we will look at both teams’ tactics and try to examine why the match ended 2-2.

Adi Hütter lined his team up in their conventional 3-5-2 formation. Frederik Rönnow was the man between the sticks since Kevin Trapp is currently injured. The back three was made of the Austrian Martin Hinteregger, Makoto Hasebe and Almamy Touré. Filip Kostić and Danny da Costa provided width as full-backs.

The central midfield was occupied by Sebastian Rode, Djibril Sow and the Japanese Daichi Kamada. The two Portuguese strikers André Silva and Gonçalo Paciência were upfront.

On the other side, Florian Kohfeldt decided to go with a 4-1-4-1 formation with Leonardo Bittencourt as the lone striker. The German is usually an offensive midfielder, but Yuya Osako, Fin Bartels and Niclas Füllkrug are currently injured and because of that he had to play up front. Milot Rashica and the 19-years-old Josh Sargent were the wingers. Davy Klaassen and Maximilian Eggestein played in front of Nuri Şahin in the central midfield.

The back four consisted of Marco Friedl, Christian Groß, Miloš Veljković and Theodor Gebre Selassie. Due to the big number of defenders, Groß was once more centre-back even though he usually just plays for the second team of Bremen. Jiri Pavlenka was, as usual, the goalkeeper.

As usual, Hütter’s team executed a very high and aggressive pressing from the first minute. They put pressure on the players of Bremen extremely high up the pitch. Their goal was to avoid an organised build-up with short passes. This pressing was mostly successful as Bremen had on average just 2.5 passes per period of possession. On the other hand, Frankfurt had a value of 4.16.

Besides cutting off all the short passing options for Werder’s player on the ball, they tried to get numerical equality or even advantage. They mostly won back the ball on the wing. In these cases, the striker and the full-back on the according side, as well as Kamada and Sow or Rode, pressed in at their opponents. In the example below, Paciência, da Costa, Kamada and Sow create numerical equality while all other players also shift to the according wing

This aggressive and effective pressing forced Kohfeldt’s team several times to play long balls. 14.04% of Bremen’s passes were long balls as all short passing options were often cut off or too risky. This was likely exactly what Hütter wanted to see as Bremen had no player upfront who was able to win aerial duels or is good in recovering possession and waiting for his teammates to push up. Bittencourt is a great player and performed well in this match but his greatest strengths are his passes and dribbles. He wasn’t often enough able to utilize these abilities in this match as his team mainly operated with long balls as Frankfurt’s pressing was very well executed.

However, even though Frankfurt dominated especially in the opening phase of this match, Bremen was able to score the first goal in the 27th minute. Ahead of the first goal, Kohfeldt’s team was able to play through the pressing of Frankfurt with the aid of short passes. This happened in this match way too infrequent. However, since Frankfurt permanently pushed up so high during the build-up of Bremen, Kohfeldt’s squad had logically a lot of space as soon as they were able to get out of their own half with short passes.

Ahead of the 0-1, as you can see in the image below, they were exceptionally able to find Bittencourt in a huge empty space. The German then found the fast Sargent with a great through pass. Even though the 19-years-old wasn’t able to score the goal, after his shot chaos broke out in the penalty area and in the end, Klaassen was able to put the ball past the goalkeeper.

Logically, it’s impossible to execute such an intensive pressing as Frankfurt showed over 90 minutes. Due to that Hütter’s team also sometimes sat back deeper in their 5-3-2 formation as Kostić and da Costa dropped on the height of the back three. This is a usual part of their conventional tactics. However, also in these situations, Bremen was never really able to create dangerous goalscoring opportunities.

As we already saw in this analysis, Kohfeldt’s team was almost never able to have longer periods of possession in which they circulated the ball and were able to stay in possession for a longer time. This was the complete opposite when we look at Frankfurt’s tactics. They had 65.09% of the time possession and played 173 more successful passes compared to Bremen.

You have to add that Kohfeldt’s team mostly sat back and defended deeper and so Hütter’s team had more time and space, but Frankfurt had a clear and good plan for their build-up. The two centre-backs Hinteregger and Touré positioned very wide, something we don’t see that often nowadays when a team plays with a back three. One of the two central midfielders Sow or Rode dropped a bit deeper to support Hasebe while the other one positioned in the centre to provide together with Kamada vertical passing options.

However, they played most of their attacks over the wings and for that, they especially used the two mentioned centre-backs. On the wing, they tried to either create an overload together with the full-backs or the two wide players Kostić and da Costa cut into the centre what gifted the higher positioned centre-backs space on the wing. This can be perfectly seen in the example below as da Costa moves without the ball into the centre and pins one opponent. Due to that, Touré has got a lot of space in the wide-area where Hasebe can find him with a through pass.

The other outstanding aspect of this situation gets visible in the second image as Touré’s cross is received by the other centre-back Hinteregger at the second post. However, the Austrian misses that chance as the volley goes wide. Anyway, this situation is a great example of the offensive centre-backs of Frankfurt.

Hütter wanted his team to create dangerous situations with the aid of crosses. His squad crossed incredible 45 times in these 90 minutes and 17 of them were successful. They were several times able to shoot on the goal as Silva as well as Paciência are both great in the air. Besides, either the opposing winger or Kamada joined them in the penalty box to have an additional receiver as we can see in the example below.

In the end, Frankfurt’s temporary lead as they scored the 2:1 in the 88th was the result of such a cross. Touré once more had too much space on the right side and in light of this, he delivered a great cross. Pavlenka could save Paciência’s header but then Silva was able to score as the ball landed in front of his feet after the save of Bremen’s keeper. But this time was the only situation in which the were able to convert one of their 45 crosses into a goal.

The Turk is one of the most important players for Bremen as he is their organiser in the central midfield and because of his experience one of the leaders. However, it’s also his tactical role in the system of Kohfeldt which is quite interesting. Because of his outstanding understanding of the game and overview, he is very important for his team when they are in possession. He usually is the one who dictates the match.

However, this was in this match almost impossible for him as Frankfurt pressed in at Bremen so aggressive and high up the pitch. Şahin positioned himself mostly between the two centre-backs as he often does but he just had a passing success rate of 77% what is for him personally the worst value of this season. He was often forced to play long balls which as already explained weren’t effective. 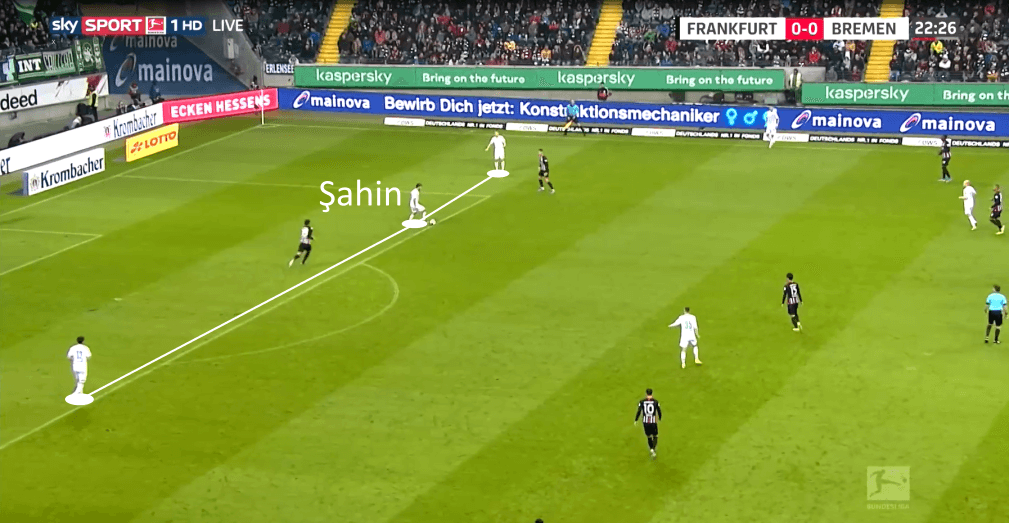 On the other side, when Frankfurt were in possession, the Turk once more dropped several times between the two centre-backs to create a back five. Especially ahead of the crosses he often supported them since as already explained Frankfurt usually had at least three players in the penalty box.

But also in other situations, he dropped deeper to avoid a numerical equality in the centre of the last line as Silva and Paciência faced Veljković and Groß. He tried to support his centre-backs as good as he could but still also tried to cover the space between the two banks of four.

All in all, Frankfurt likely deserved the win more as they were able to create more goalscoring opportunities especially with the aid of crosses and their fast transition from defence to offence as soon as they won the ball because of the pressing.

However, Bremen fought well, and they are happy with that point. They will face Hertha BSC in their next game in the Bundesliga after the international break while Frankfurt will play against Bayer Leverkusen.