Going into this weekend’s round of fixtures, Wolfsburg were one of only two teams yet to lose a game in the Bundesliga. In order to keep this run going, they would have to deal with newly-promoted Union Berlin. They had lost their previous three games since upsetting Borussia Dortmund for their only league win thus far this campaign. It proved to be a frustrating game for the home side as Union Berlin looked to deny them of the three points with some resolute defending, whilst looking to nick a goal themselves. However, Wout Weghorst’s 69th-minute strike proved to be the difference as Wolfsburg went second in the table with a 1-0 win. This tactical analysis delves into the tactics used by both sides in this analysis of the Bundesliga clash. 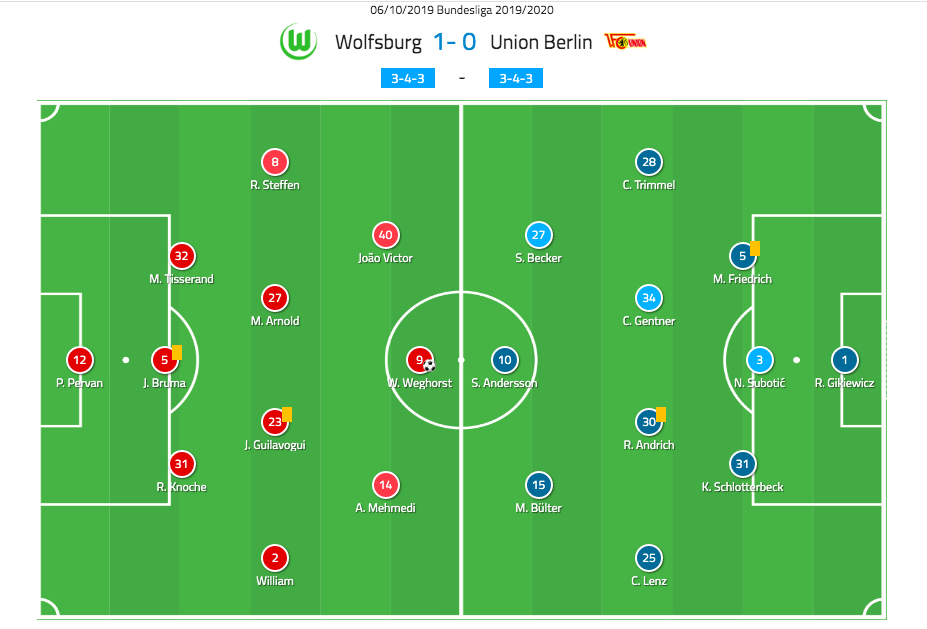 The game was closely-fought throughout with very little to separate the sides. This was largely down to both managers, Oliver Glasner and Urs Fischer, fielding identical formations. Fischer has predominantly favoured a 4-4-2 this season but clearly set his side up with the hopes of nullifying Glasner’s infamous 3-4-3 by producing a carbon copy of it.

For Union Berlin, Christopher Lenz was preferred in the left-back role to Ken Reichel, whilst Renato Steffen came in for Jérôme Roussillon, who suffered a calf injury in the Europa League against Saint-Étienne.

Both sides engaged in high presses throughout the game with Wolfsburg’s PPDA of 5.8, narrowly better than Berlin’s 6.69. Regardless, both sides worked hard to win back the ball as early as possible. Wolfsburg kept the ball better and still only averaged 3.15 passes per possession; a sign of how effective both sides were with their pressing. Berlin worked hard to prevent Wolfsburg from playing out of the back comfortably but also worked hard to ensure they dropped back as a unit if and when Wolfsburg broke their lines.

The image below shows their high press and their narrow positioning, forcing Wolfsburg to play wide rather than use their central options. Berlin wanted to prevent Wolfsburg’s centre-midfielders, particularly Maximilian Arnold, from receiving the ball in central areas and therefore stop them from dictating the tempo. They were successful in doing this and Arnold had to drift into wide areas to receive the ball, which I will explain in more detail later. 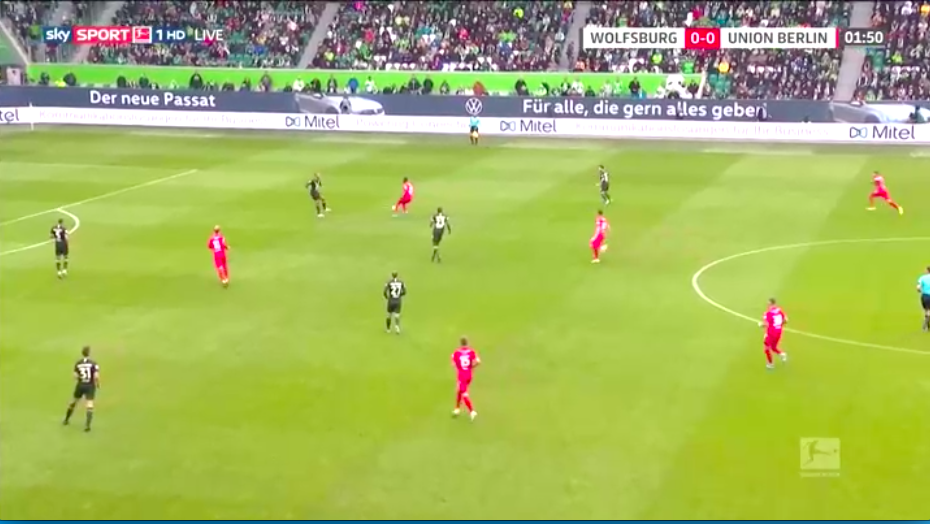 Berlin held their 3-4-3 shape when the ball was in Wolfsburg’s half, pressuring their three centre-backs into playing long. When Wolfsburg were able to advance the ball higher up the field, Fischer’s side dropped into a 5-2-2-1, in a shape similar to the image below. 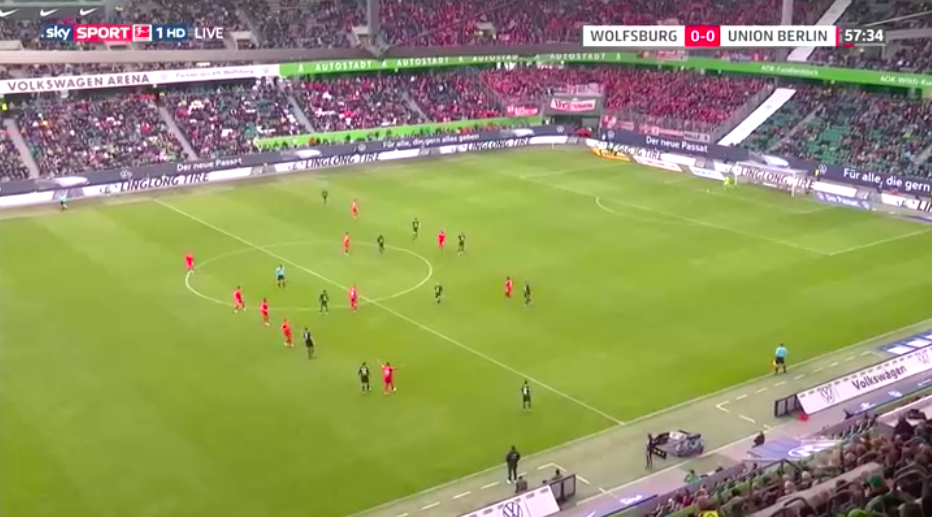 They were successful in breaking up play throughout the day and won 60.49% of their defensive duels as a team.

Wolfsburg were the better side on the day and would have been rightly disappointed not to have come away with three points. Despite only managing three shots on target, they could have won the game by two, or even three goals had a VAR decision not gone against them.

However, with Berlin’s valiant defensive display it turned into a game of patience for Glasner’s side as, despite more quality on the ball and better chances, they struggled to break them down.

Initially, they focused the majority of their play down the right-flank using either right-back William or Arnold, as an option to play the ball down the line for Weghorst to run onto. By doing so they looked to bring others into play as Weghorst held the ball up or to get behind the defence and cross. Their crosses were nearly all aimed at the penalty spot, as we can see from the image below. Nine of their 19 crosses met their target, but they struggled to seriously test Rafał Gikiewicz from these chances. 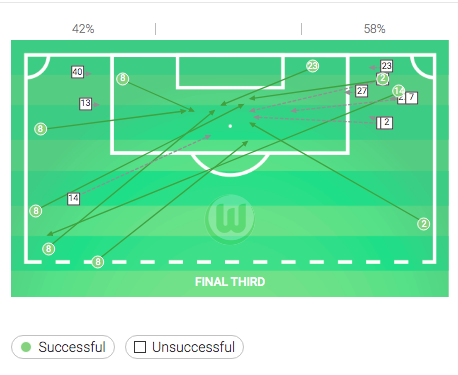 Due to their commitment to using the right flank, the majority of their chances came from this side. Both teams played relatively directly over the game, with 13.66% of Wolfsburg’s passes long and Berlin’s 16.77%. The long ball in behind the Berlin backline created opportunities, but Wolfsburg were unable to capitalize on these.

Wolfsburg looked to work the ball to the right-back position as quickly as possible and use the pace William or Weghorst in behind the Berlin defence. Maximillian Arnold would often drop from central-midfield into this area, allowing William to push on and move into an attacking position down the right-wing. He subsequently looked to play the Wolfsburg front line and William in with a lofted pass down the line as we can see in the image below. 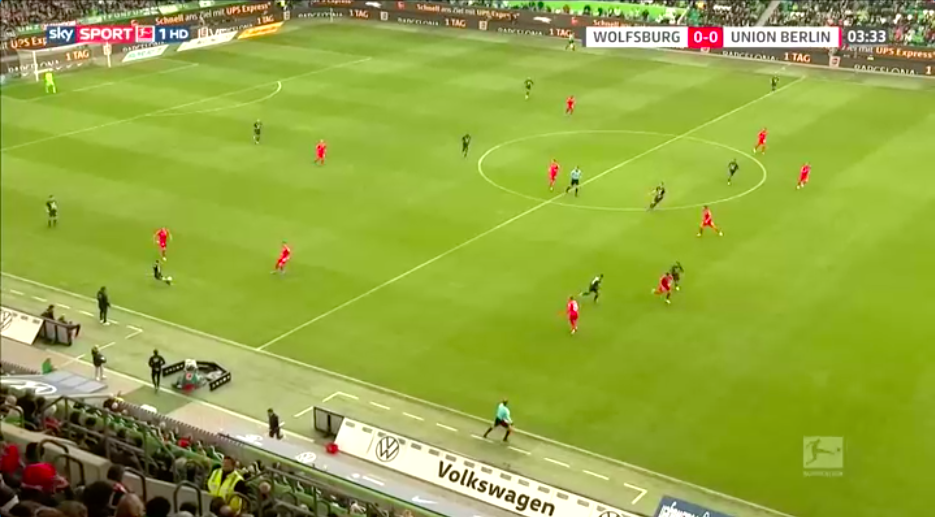 In order for this to be successful, Wolfsburg had to draw Union Berlin’s defence forward.

To do so Glasner utilised central-midfielder Josuha Guilavogui as a catalyst for this. With Wolfsburg playing out from the back, Guilavogui constantly dropped deep and played in between the lines. By doing so he looked to draw Berlin’s midfield toward him and subsequently have their backline move forward as well. If the midfield pressed Guilavogui, and the defence didn’t push up themselves, this created space for one of Wolfsburg’s front three to drop in and receive the ball.

Wolfsburg were direct in their approach all game, not just when looking to use the wide areas to play Weghorst in behind. Glasner had Wolfsburg adopt vertical passing to break the Berlin lines. Throughout the game, Wolfsburg looked to bypass the midfield with their passing and use quick interchanges with their attacking three to again attack the space behind Berlin’s backline.

The front three played very close together and were constantly looking for quick passes between one another that could release one of them into space. Wolfsburg’s width was provided by both Steffen and William pushing high and wide.

There was little quality from Union Berlin in the final third and this will undoubtedly concern Fischer. Only Köln have scored less than his side in the Bundesliga and this weekend showed why they are having such issues. 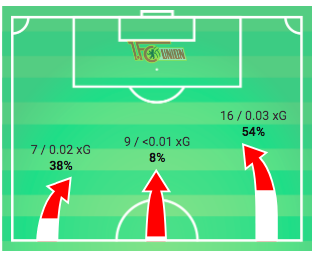 Their decision making when shooting was poor, taking plenty of low-percentage shots. Their xG per shot was a very low 0.05 compared to Wolfsburg, who had 0.15 xG per shot. They were also taking far too many shots from long range. Union Berlin’s average shot distance was 21.3 yards, compared to Wolfsburg’s which was just 14.7 yards.

When playing against a 3-4-3 there will naturally be space behind the wing-backs, and Berlin pursued similar tactics in attack as their counterparts. However, Wolfsburg sat deeper and Berlin struggled to find space behind the Wolfsburg defence. With the ball in wide areas they looked to cross but, although they took only two fewer crosses than Wolfsburg, their accuracy was a miserly 23.53%. With Wolfsburg sat deeper, their defence was able to set themselves quicker to defend the cross, and that’s why Berlin struggled to cause problems from wide areas. 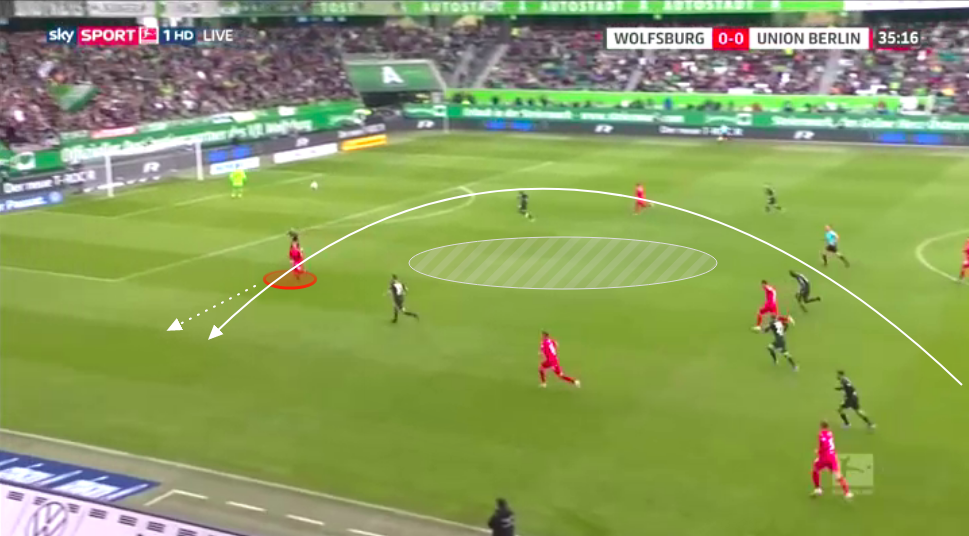 With their crossing faltering, their forward line looked to play in their midfield who moved into the space left vacant by their front three’s forward runs. However, with Wolfsburg sitting deep, Berlin possessed neither the patience or quality to advance the ball any further and often resulted in taking the aforementioned long-range shots. Wolfsburg were more than happy to allow this and continued to sit off. Berlin’s efforts from outside the box were abysmal, with only one tame effort hitting the target. 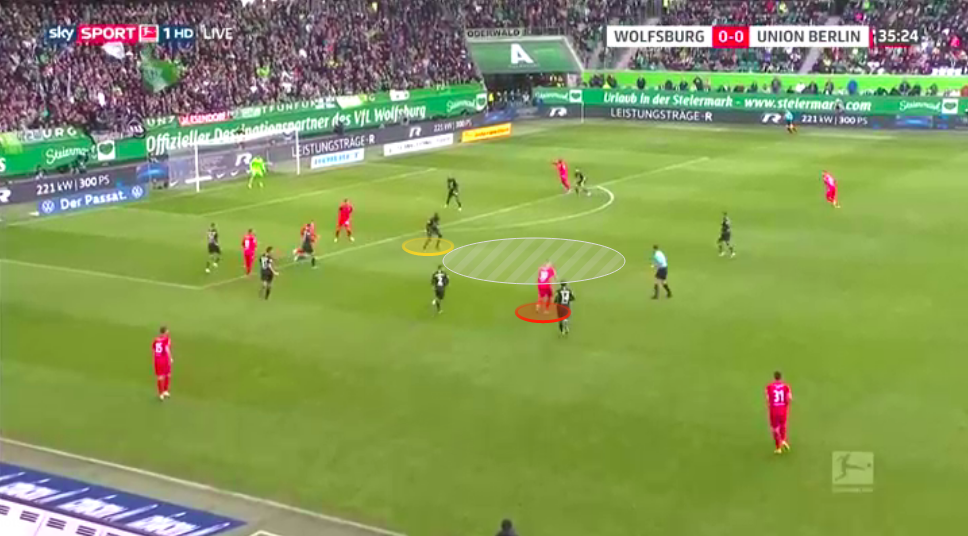 In the second half, as Wolfsburg pushed for the goal, Glasner was less strict with his side’s defensive shape, often allowing a 3v3 opportunity to develop. Although this isn’t an uncommon occurrence against a Glasner side, there seemed a lack of urgency from Wolfsburg to ever rectify this issue. But there was a lack of quality from any of Berlin’s front three to engineer a goalscoring opportunity from a chance such as in the image below, to ever worry the Wolfsburg goal. 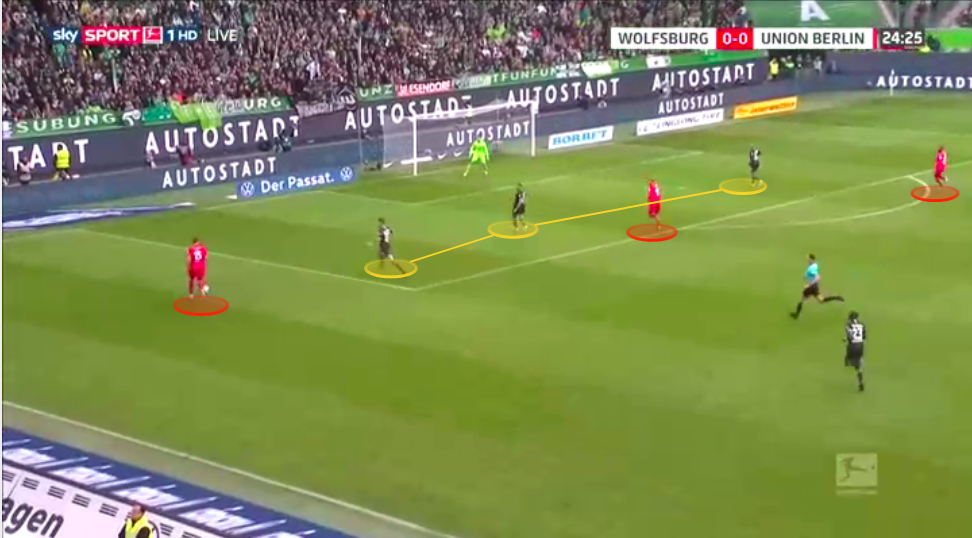 With both teams starting the game at different ends of the table you could have been forgiven for expecting a more one-sided game. Wolfsburg were the better side but it was nevertheless a cagey affair and Fischer deserves credit for pushing Wolfsburg in a game of tactical chess as Wolfsburg looked to break down the very system they employ themselves.

However, Wolfsburg finally broke down the Berlin defence, and Weghorst justly gave them the three points with a cool finish.

With Bayern Munich losing to Hoffenheim, Wolfsburg are now the only undefeated side left in the Bundesliga and sit just one point off of the summit with seven games played.