The Bundesliga game between Mainz and Wolfsburg was not an offensive spectacle but provided some tactical insights concerning the current strengths and weaknesses of each side. Whereas Mainz struggled in the beginning of the season with the second-youngest team of the league, Wolfsburg have been successful und unbeaten under their new head coach Oliver Glasner.

Our tactical analysis reveals some of Wolfsburg’s defensive tactics and deals with the issues of Mainz’s attacking approach. Moreover, we take a closer look at the impressive pressing statistics of Mainz and explain why the might get misunderstood.

Mainz coach Sandro Schwarz stuck to his preferred 4-3-1-2 formation. During the attacking phase, the full-backs were supposed to attack down the flanks and put in crosses while the striking duo constantly threatened the space behind the opposition backline.

Wolfsburg coach Glasner lined his side up in a 3-4-3. While the flanks were occupied by the wing-backs Jérôme Roussillon and William, Josip Brekalo and Admir Mehmedi positioned themselves within the half-spaces behind striker Wout Weghorst. The double-pivot in midfield consisting of Maximilian Arnold and Josuha Guilavogui covered the central areas in front of the backline during the defensive phase. And during the press, the ball near wing-back pushed slightly higher while the other one joined the central defenders to form a situational back four.

Throughout the whole game, Mainz pressed Wolfsburg during the build-up to stop them from cleanly progressing up the pitch. Therefore, Mainz’s attackers used their cover-shadows to prevent any passes into wide areas and forced Wolfsburg’s build-up into the centre of the pitch.

In the second half, Schwarz switched formations to a 4-3-3 in order to be capable of “pressing Wolfsburg even more aggressively” (Sandro Schwarz).

The PPDA (=passes allowed per defensive action) value proves the aggressiveness of Mainz’s high press. Schwarz’s side only allowed 5.74 passes per defensive action which is extremely low compared to the average PPDA value of 10.84 of Wolfsburg’s opponents in 2019/20. That meant that Mainz disrupted the opposition build-up early on. Paired with their good defensive duel statistics (Mainz could win 75% of their defensive duels), the numbers show that Mainz’s defensive strategy allowed them to win the ball quite often.
However, one issue about the PPDA value is that it solely displays the number of allowed passes and not whether they outplayed the press. Since Wolfsburg regularly used long balls to progress up the pitch, they did not need many passes to create chances. And although Mainz could defend a lot of these balls, any situation which ended within the final third meant danger for Mainz’s goal.

But as so often in tight matches, a set-piece situation was decisive to the result of the game. Wolfsburg were the more effective side and converted their only corner kick of the game into a goal.

Wolfsburg used a short corner-kick variant and outplayed the Mainz defender in a 2v1. As a consequence, Wolfsburg got closer to the goal and could still put in the cross without much pressure. 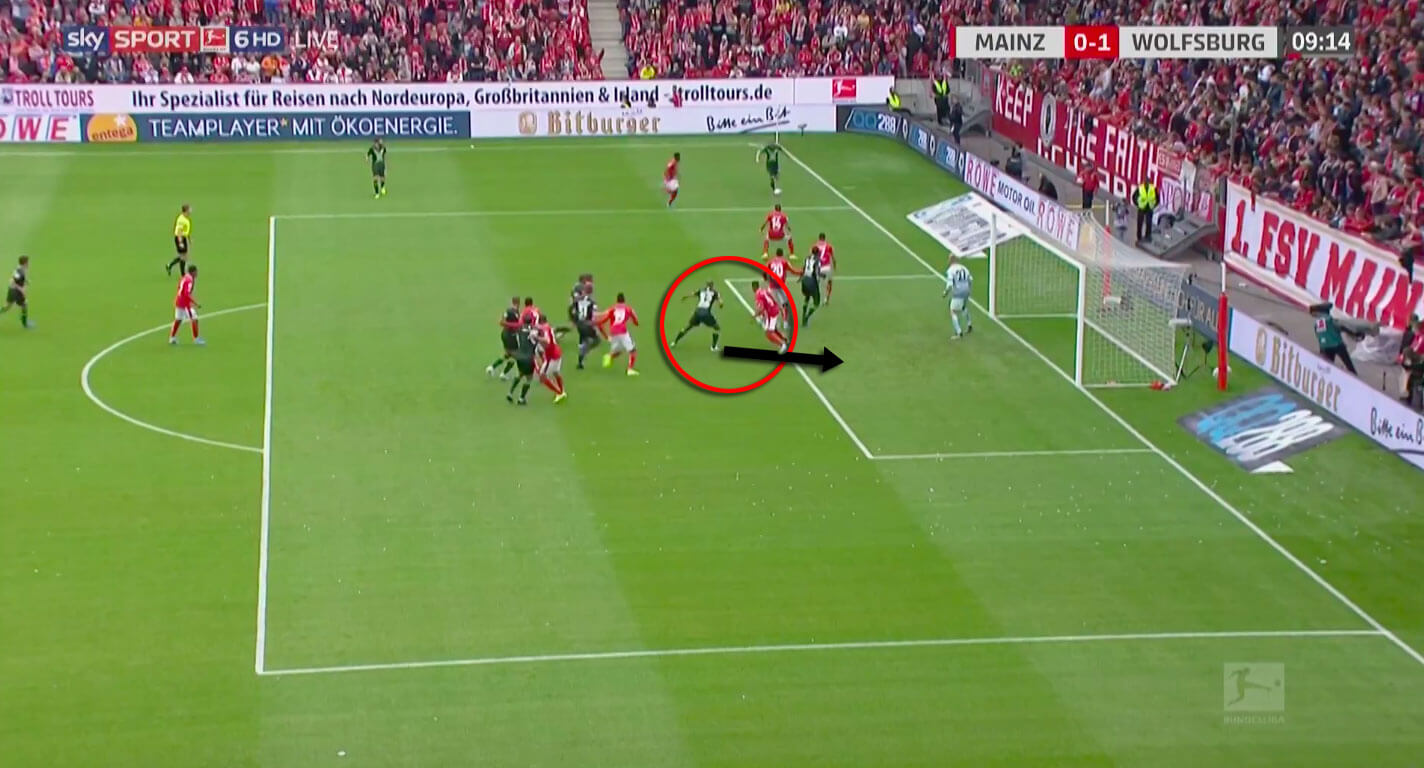 Another issue of Mainz was that they sometimes lacked numbers in the back when losing the ball. As at least one of their full-backs supported the attack to provide the necessary width in their 4-3-1-2 shape, Mainz offered space on the wings to transition into. In the situation below, for instance, Wolfsburg can start a counter-attack by playing into space on the wing which was left free due to Daniel Brosinski’s offensive contribution.

With the incredible number of 83 passes to the final third and a success rate of 66.27%, Mainz were capable of getting into Wolfsburg’s defending third through passing more often than any other team this season.

Moreover, the narrow positioning of Mainz’s forwards disabled them to get behind the defenders with through passes.

Instead, they often received the ball turned backwards to the goal.

In these situations, Mainz’s midfield sometimes missed back pass options. As a consequence, they often had to play out wide.

Mainz tried to create scoring opportunities with crosses from wide areas. All in all, Mainz put in 22 crosses with a success rate of 40.91% which is again a good value against Wolfsburg’s solid defensive department. However, Wolfsburg’s aerial superiority led to a lot of crosses being cleared by Wolfsburg. Glasner’s team could win 55.77% of their aerial duels, while Mainz’s success rate was way lower with 34.62%.

And instead of trying to get towards the end line to force another Wolfsburg defender out of their shape and get into a position to play a possible pass back to the edge of the box, Mainz tried to threaten the opposition goal with their crosses over and over again – without success.

Due to the dominance of Mainz 05, Wolfsburg had to defend a lot within their defending third. Nevertheless, they demonstrated their solidity in and around the penalty area.

Throughout the whole game, Wolfsburg made 49 clearances which is twice as many as their average value of 19.23 clearances per match.

Initially, Glasner’s side would press the opposition in a man-oriented way.

But once Mainz had progressed up the pitch (often using chipped balls towards the attacking duo) Wolfsburg immediately fell back into a deep block behind the ball.

Wolfsburg’s defensive department focused on blocking the central passing lanes to the goal and therewith forced Mainz to play out wide. To defend crosses, Wolfsburg’s back three stayed in the centre while the wing-back on the ball side pressed the ball-carrier and attempted to block the cross.

The advantage of Wolfsburg’s double pivot in front of the back line was that the ball near defensive midfielder could shift towards the wing to support the wing-back while the other one joined the three central defenders within the penalty area. That way, Wolfsburg set up in a 3+1 within the box and covered the most dangerous zones. And even if opposition attackers received the ball, they were at least interfered by a Wolfsburg defender. As a consequence, Mainz could not score throughout the whole match.

Whenever Mainz attempted to shoot from outside the penalty area, there were enough Wolfsburg defenders positioned between attacker and goal. That way, Wolfsburg blocked a lot of attempts.

To conclude, Wolfsburg won the game with a bit of luck despite the high pressure defending of Mainz. Although the statistics in our tactical analysis speak for a Mainz dominance, Sandro Schwarz’s side could not utilise their superiority due to their issues within the last third.

Oliver Glasner, on the other hand, will be satisfied with the defensive solidity of his side. Currently, Wolfsburg possess the best defence of the Bundesliga as they have only conceded four goals yet. And their defensive performance against Mainz displayed why they are so solid. With their defensive qualities within the box, they could frustrate Mainz’s attack and clear or block most balls. Nevertheless, Glasner will have to improve his side’s attacking approach in order to stay within the higher regions of the Bundesliga table.