Borussia Dortmund dropped points for the second week in a row as they drew 2-2 with Werder Bremen at the Signal Iduna Park. Lucien Favre’s side endured another frustrating afternoon and now find themselves three points behind the leaders Bayern Munich.

For a side widely tipped to become champions, Dortmund struggled due to their predictability and poor defending. Werder had a good game, largely nullifying Dortmund’s strengths and hitting them on the counter-attack. While Dortmund dominated possession, they could not find the winning goal and have a variety of issues to address if they are to mount a serious title challenge. This tactical analysis aims to look at the tactics employed by both sides. 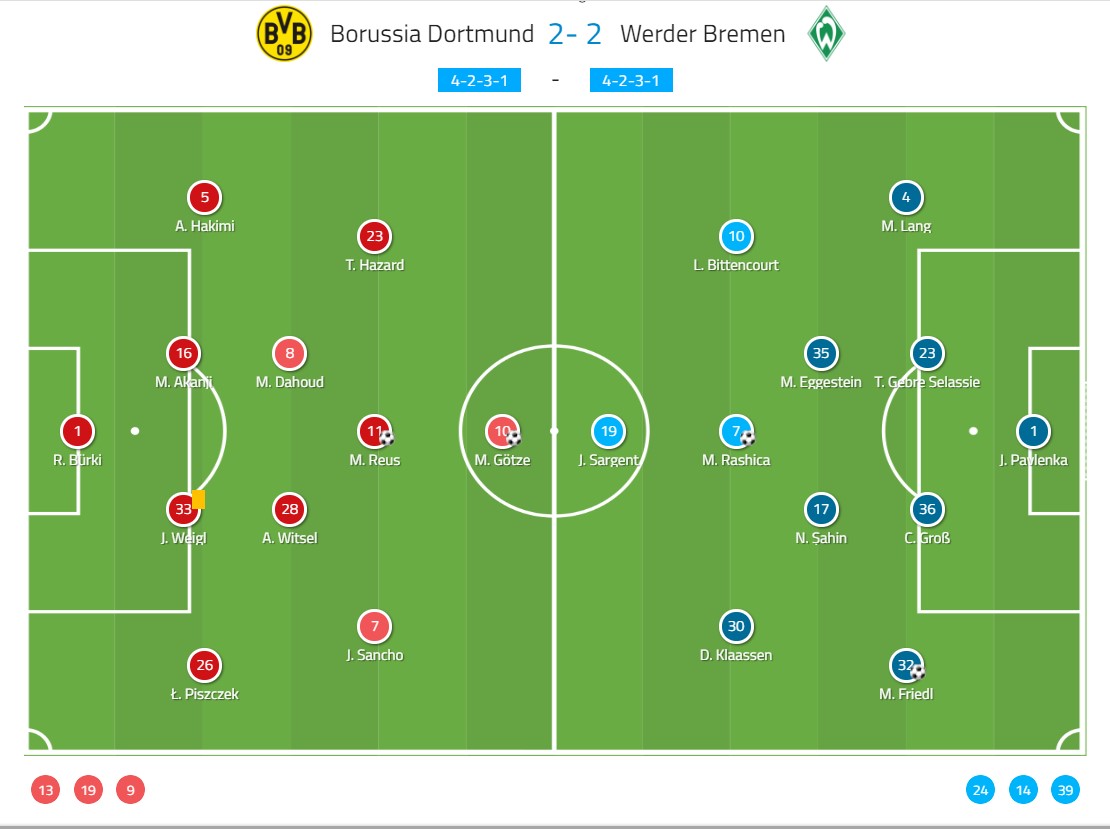 Borussia Dortmund lined up in their familiar 4-2-3-1. Manuel Akanji and Julian Weigl played in defence with Łukasz Piszczek and Achraf Hakimi as the full-backs. Favre picked Axel Witsel and Mahmoud Dahoud to form the pivot in midfield. Mario Götze led the attack with Thorgan Hazard and Jadon Sancho on the flanks and Marco Reus behind.

Werder Bremen played a 4-2-3-1 as well on paper but actually lined up in a 3-5-2.  Josh Sargent and Milot Rashica played as the two strikers up top with Michael Lang and Davy Klaasen out wide. In midfield, ex-Dortmund player Nuri Şahin started with Maximilian Eggestein and Leonardo Bittencourt.

The game began with intensity and speed as both Dortmund and Bremen tried to press. While the home side pressed all over the pitch, Bremen largely confined their pressing to Dortmund’s two central midfielders and wide players. By pressing Witsel and Dahoud, Bremen were able to make Dortmund unnecessarily recycle the ball back to defence and therefore caused them to struggle with their transitions. This pressing was done by the two forwards Sargent and Rashica who both had a good game. When Dortmund shifted the ball to the flanks, Bremen were quick to neutralize the threat and tried to ensure numerical superiority.

On the right flank, Piszczek and Sancho were faced with Klaasen, Friedl, Groß and even Şahin at times. As a result, the overlap was usually snuffed out and Bremen managed to keep Sancho quiet for large parts of the game. The same situation was prevalent in the left wing as the duo of Hakimi and Hazard really struggled to make it past a certain point. Overall, it was a hard-working defensive performance from Bremen who took full advantage of Dortmund’s predictability.

Borussia Dortmund have not started the season well. They have kept just one clean sheet so far in the league and are conceding goals left and right. The most frustrating part of the goals they have conceded is that they have come from issues that have plagued the side since the last campaign. Bremen’s first goal came from a situation where Dortmund had overcommitted themselves. With little to no protection in midfield, Klaasen was able to whip the ball over the Dortmund defenders who were unaware of Rashica’s run behind them.

The general lack of awareness from the defenders and the way Dortmund are overrun in midfield on counter attacks is a serious issue that Favre needs to address. Witsel is left isolated far too often and at times the Belgian himself is caught out of position playing high up the pitch. Dortmund would be well-advised to play a genuine ball-winning midfielder to protect the defence on the counter because they currently have no answers to any side that comes at them with pace and width.

Another area where Dortmund have struggled is defending set-pieces. In the second half of last season, Dortmund conceded an astonishing 10 goals from set-pieces and the trend has continued this season, so far having conceded more than five goals from set-pieces. The zonal-marking employed by Favre clearly has its flaws. In this game, Marco Reus found himself marking the powerful Sargent at the near post. The American flicked the ball on across goal for Friedl to tap-in, as the home side’s defenders were caught ball watching. Dortmund’s defenders are not the tallest and ought to compensate for this by being more aware of their surroundings.

In attack, the home side may have managed to score twice but managed just seven shots on target despite having 66% of the possession and making 749 passes. Dortmund’s extreme reliance on width in attack and predictable sequences has been widely criticized and this draw was another indication of the same.

The issue with Dortmund is that all of their attackers prefer playing out wide. Reus rarely stays centrally while both Sancho and Hazard preferred to maintain width. As a result, Dortmund have no method of attacking centrally. The most comfortable option whenever any Dortmund player has the ball is to simply circulate it to the closest wide player which makes them miss out on many opportunities that may arise if they were to attack through the middle.

In this match, Bremen committed their midfielders to defend the wide areas which meant that the central areas were not as well protected. Dortmund ought to have isolated Şahin and attack through the middle. Teams now know how to defend against Dortmund and sooner or later the goals will dry up for Favre’s side.

Milot Rashica and Josh Sargent were the visitors’ best players and formed an interesting partnership in attack. Rashica’s pace and movement perfectly complemented Sargent’s physicality and aerial prowess. There were many sequences where Sargent would win the aerial duel and find Rashica who had made a run predicting the same. The Kosovar scored Werder’s opener while Sargent assisted Bremen’s second goal.

In conclusion, Dortmund continued a poor run of form that has seen them win just one of their last four games. Draws against Frankfurt and Werder Bremen are inexcusable for Favre’s side if they are to be considered as legitimate challengers to Bayern’s crown. Borussia Dortmund have structural and defensive issues that they need to correct at the earliest as they are no longer the same side that took the Bundesliga by storm last season. The tactics employed by Werder Bremen played to their strengths as this analysis has shown. It was a good draw for a side plagued by injuries.