Despite finishing the last Bundesliga season in 6th place, Wolfsburg decided to part ways with their coach Bruno Labbadia and brought in 44-year-old Oliver Glasner from LASK Linz. The Austrian already implemented a lot of new tactical ideas, which could be seen in the first friendlies of the new season. In the season preview, we will provide a scout report on Wolfsburg for the 2019/20 season.

This tactical analysis will particularly point out, why Glasner’s team will be an exciting side to watch and how they could finish even higher than last season. To do that, our analysis will break down the tactics Wolfsburg used in the most recent games.

Back three is the way to go for Glasner

Concerning the formation, Oliver Glasner experimented a little in the first games. However, these experiments did not affect the backline, as this was always a back three. It seems almost certain that Glasner will use this throughout the whole season. Against PSV Eindhoven, he tried a 3-4-3 formation with a holding midfield. 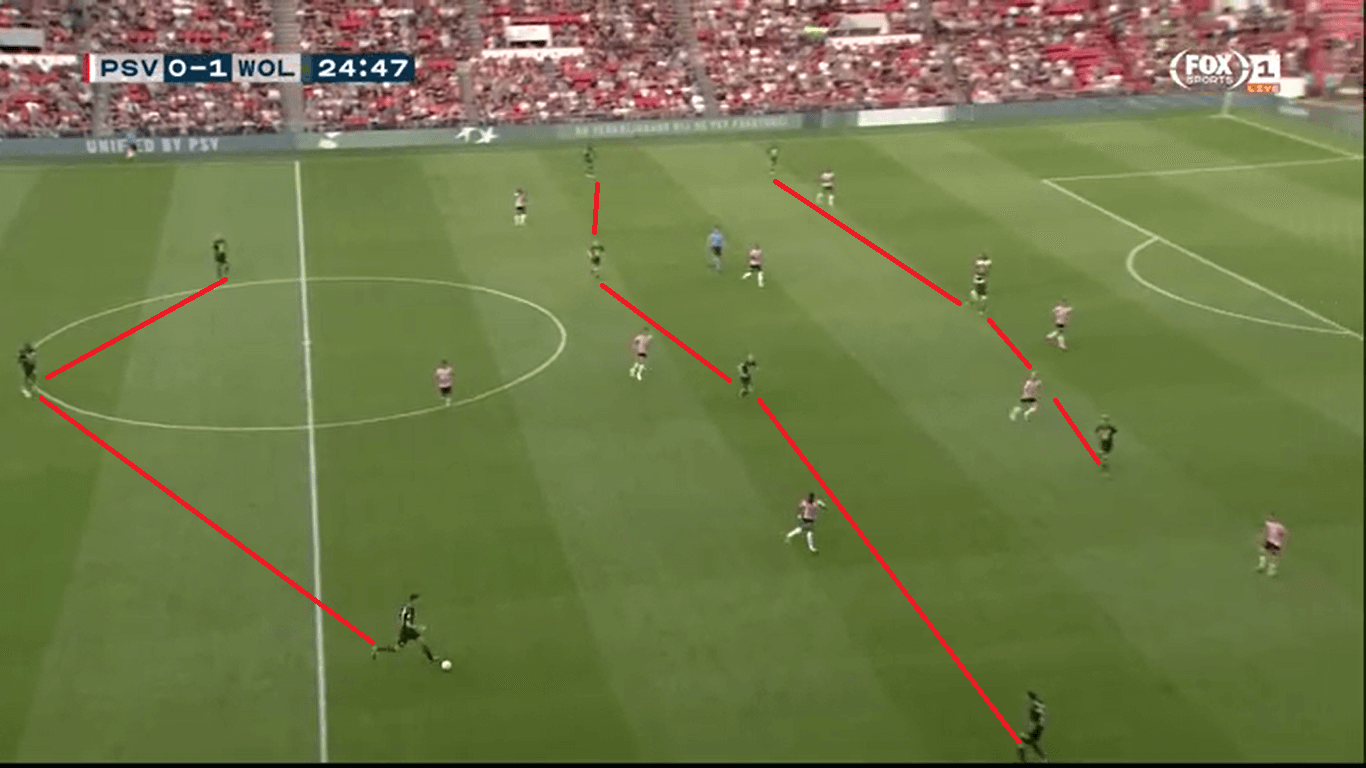 Even though it seems as the back three is too much in the build-up against Eindhoven’s sole striker, it does make sense the way Glasner implemented it. Normally, the main principle of possession play would be to have one additional player against the opponent’s attacking line when building up, meaning that two centre-backs should be sufficient against one striker. The idea behind it is to use the least possible amount of players in the build-up in order to ensure that there are enough players in higher areas of the pitch.

However, we can see in the image above that the right centre-back dribbles forward with the ball. Thanks to the 3 vs 1 position, he has a lot of space and time in the half-space. As he dribbles forward, Eindhoven’s left-winger soon has to make a decision whether he wants to attack the ball or close the passing lane to the wing. In the meantime, the passing lane to the right central midfielder opens up as well.

In some other games, Wolfsburg played some kind of a flexible 3-6-1 formation with different staggering in the centre. The image below provides an example. 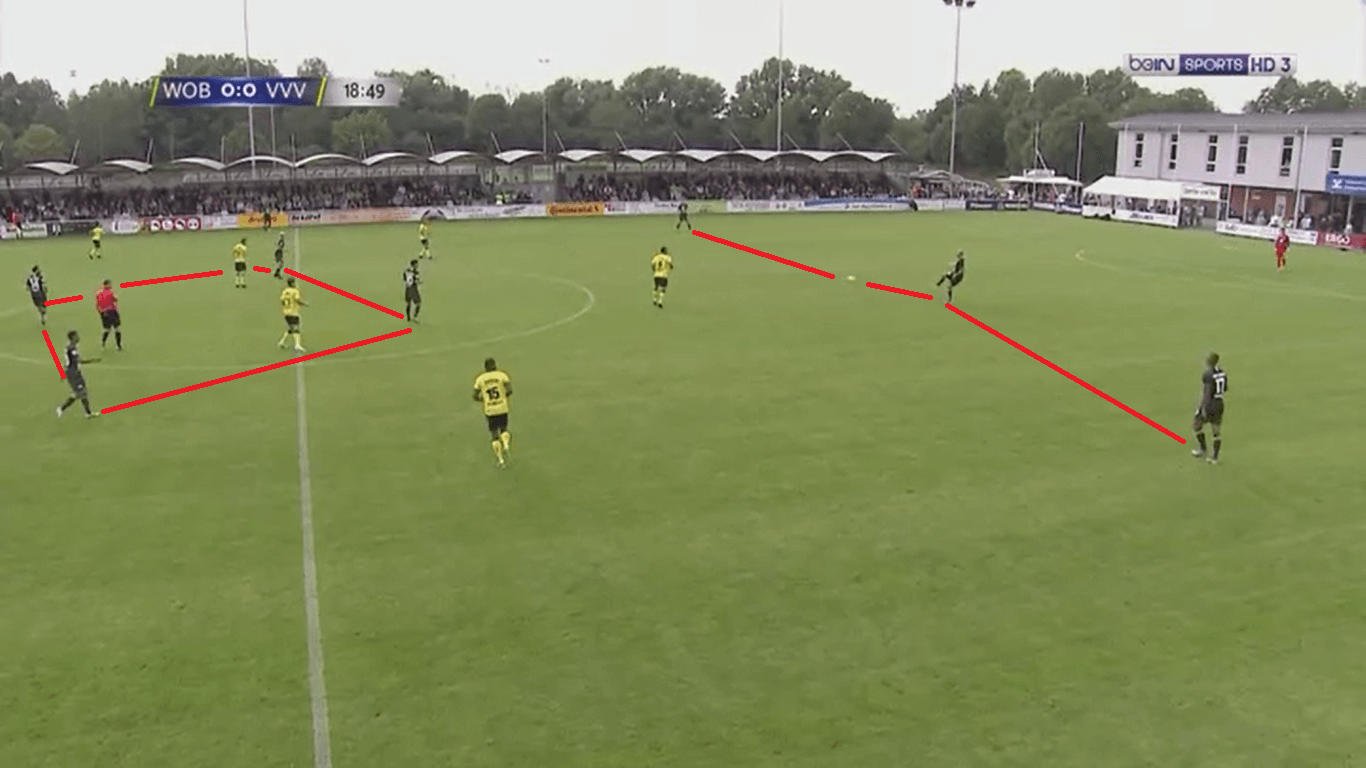 Here, we see once again a back three, but the midfield is diamond-shaped. This leads to much more control in the centre and also creates different passing angles. 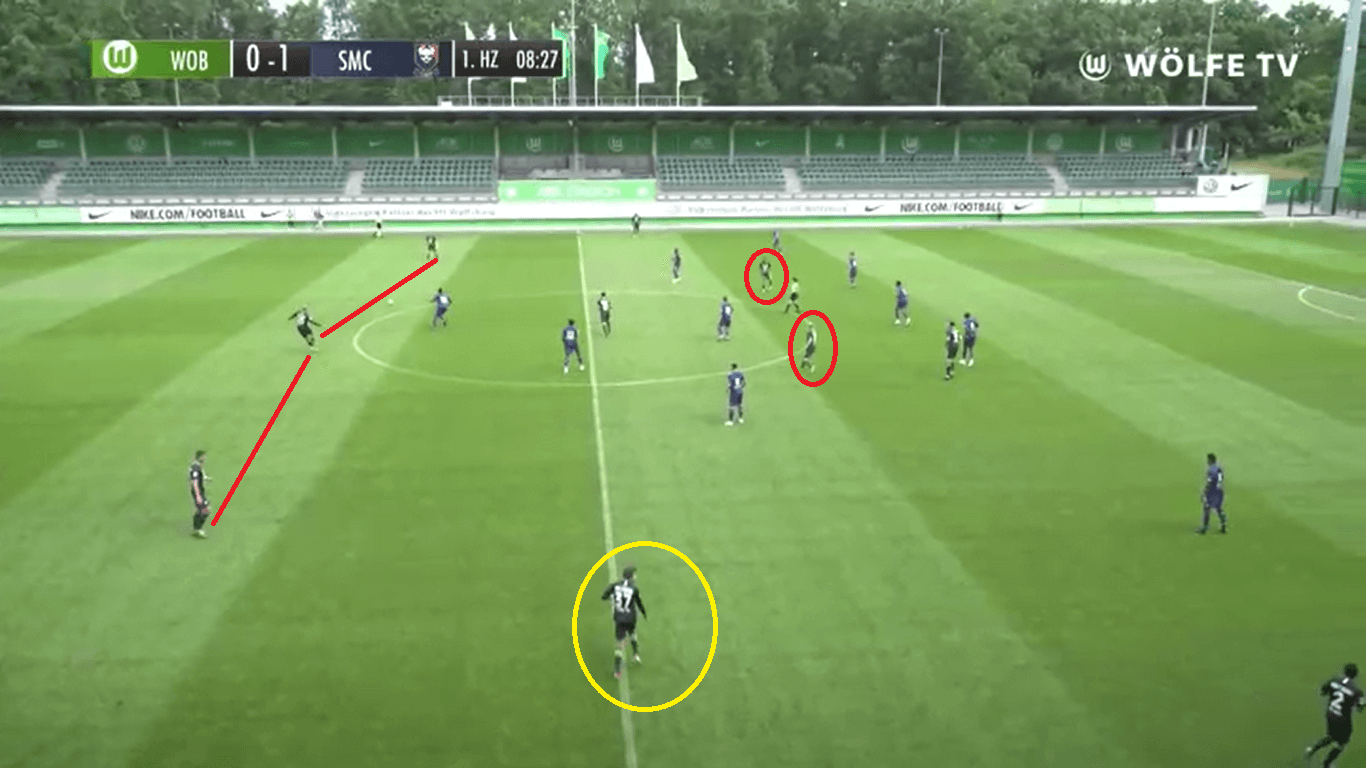 Another example can be seen here, where a 2-2 midfield box evolves into a 1-2 centre, while Elvis Rexhbecaj moves out from the centre to the wing. This may make sense sometimes in order to avoid the crowded centre and find open space elsewhere.

In some cases, these movements were not perfectly coordinated though. One example can be seen in the image below. 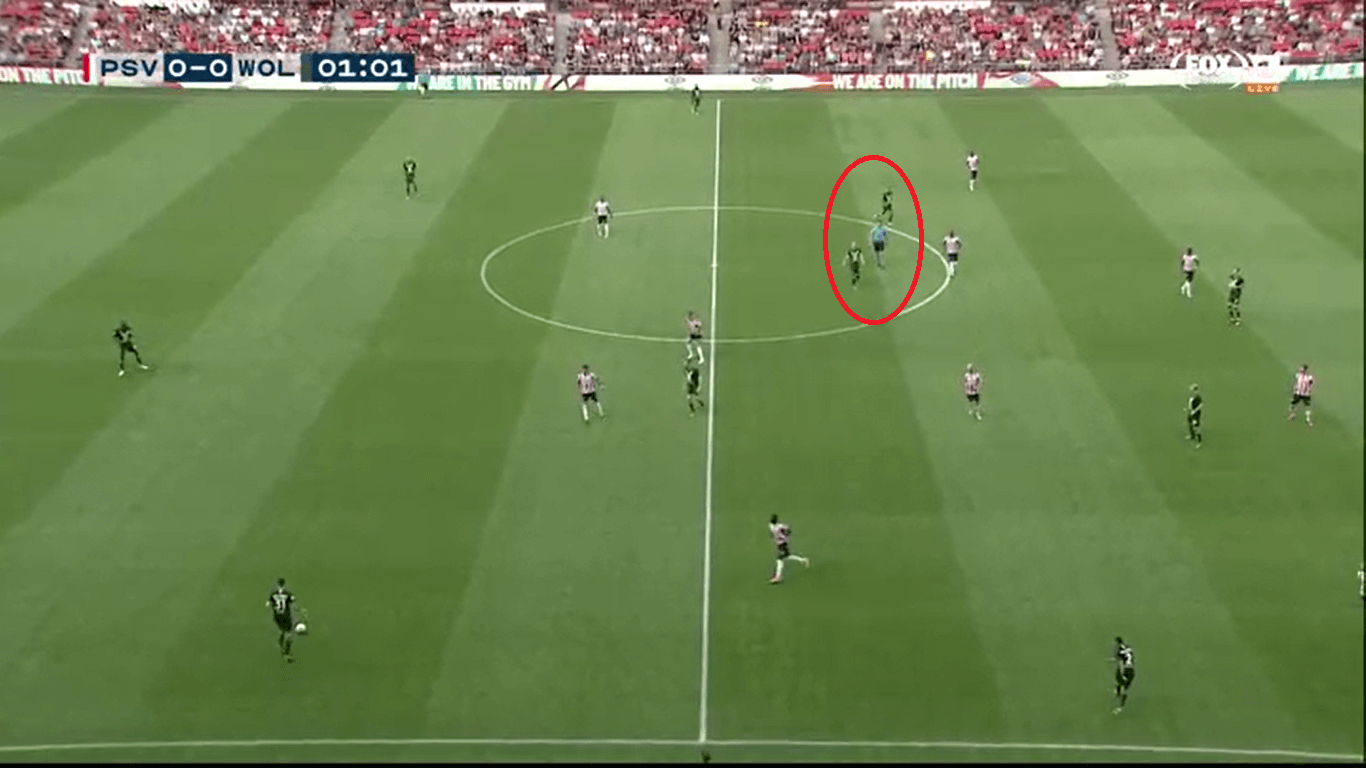 The two players circled in red are too close to each other and do not stretch out the opponent as they should. It would make more sense if one of them would occupy the space between the opponent’s backline and midfield line, while the other one would drop back near the halfway line. This shows that despite all the great ideas, there is some work left for Glasner to sort out all the details.

What stands out when watching this new Wolfsburg side is their great off-ball game. Especially in the final third, Wolfsburg want to trick the defence with complex movement and a lot of runs behind the backline. The image below shows an example of this. 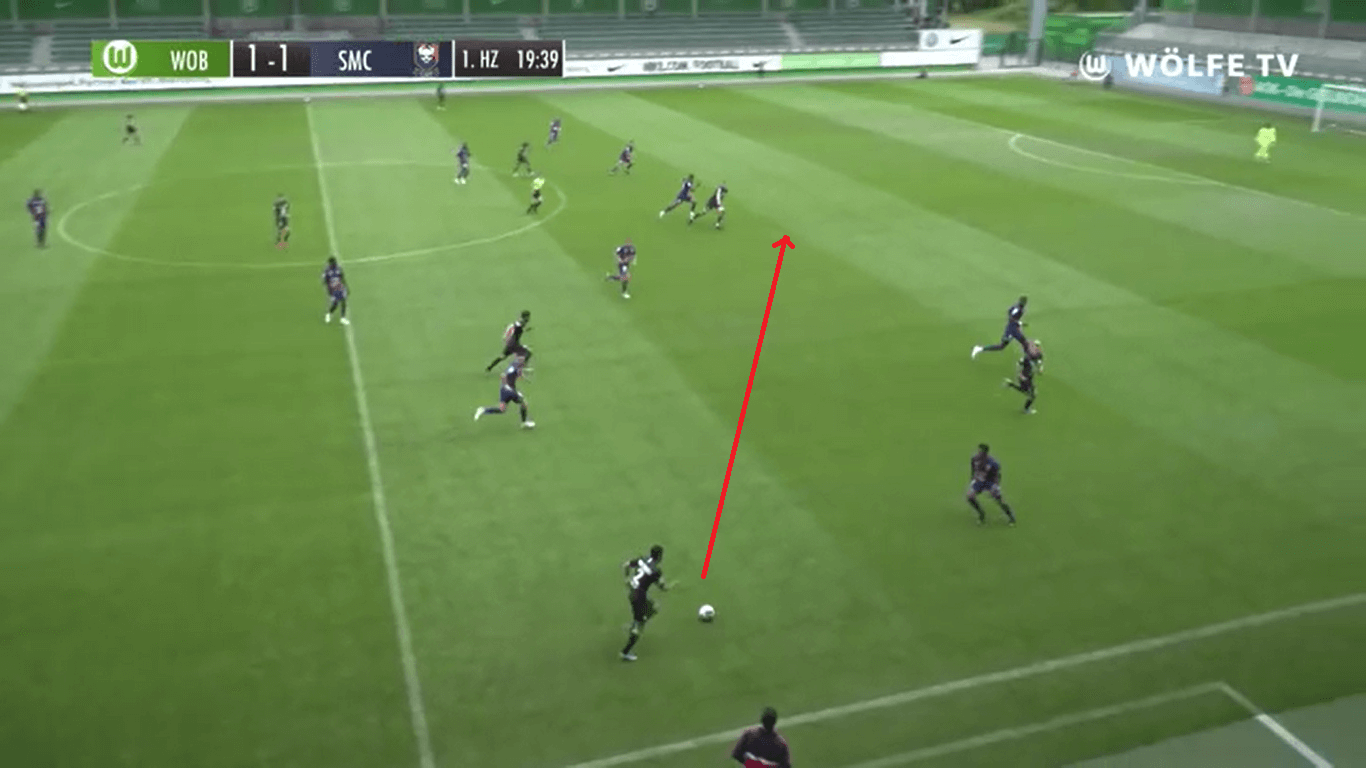 Here, we see a rather simple example, but nonetheless, it demonstrates pretty well what Wolfsburg want to achieve. While the right-winger runs wide to open up space, the striker makes a run from the centre into the open space. An important aspect hereby is that a diagonal pass is played, so that the striker does not have to reduce his tempo and turn, but rather is able to directly run towards the target. 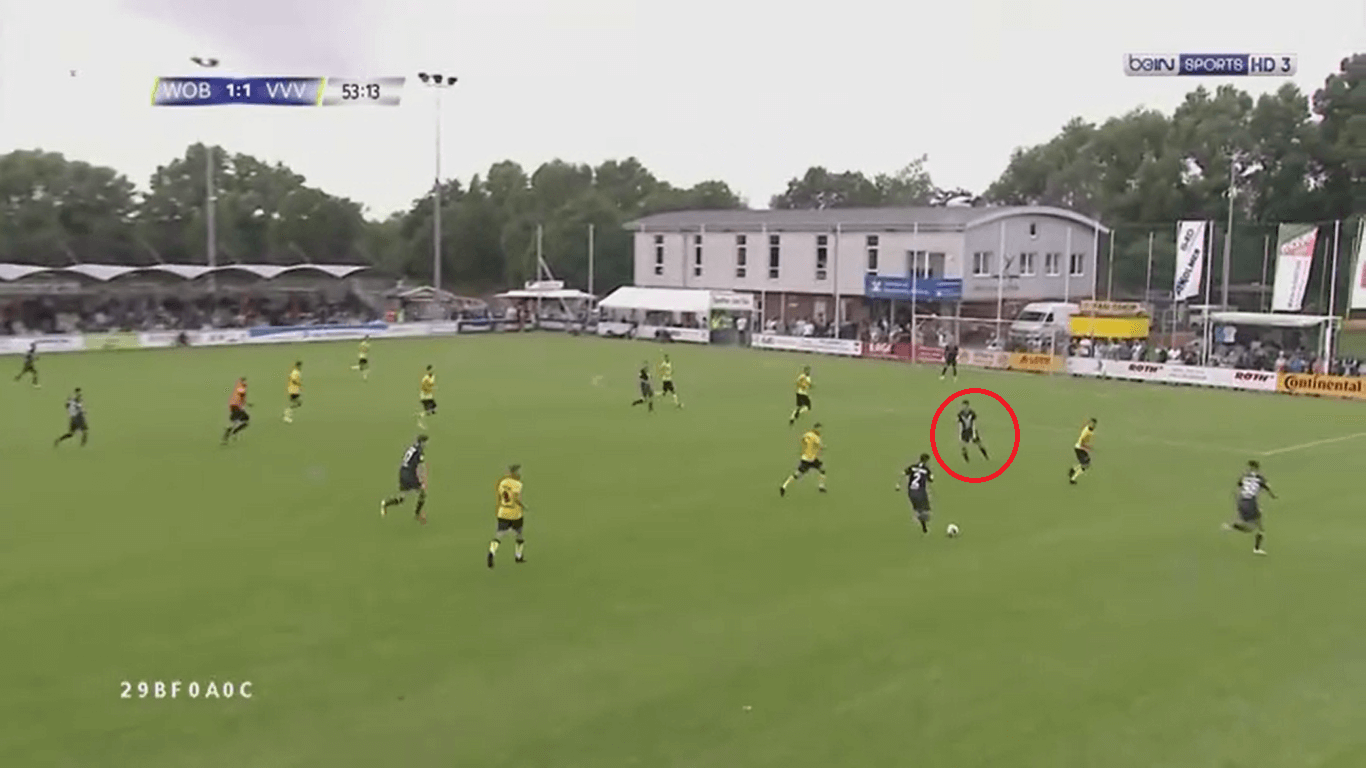 Also, Wolfsburg always try to occupy the gap between two opponents. A lot of their movement, especially in the final third, aims to create situations like in the image above, where after the pass a dangerous situation can be created after turning towards the target.

Looking at the set-pieces, we can also see that there is a lot of movement. At corner kicks, the usual starting point looks as follows. 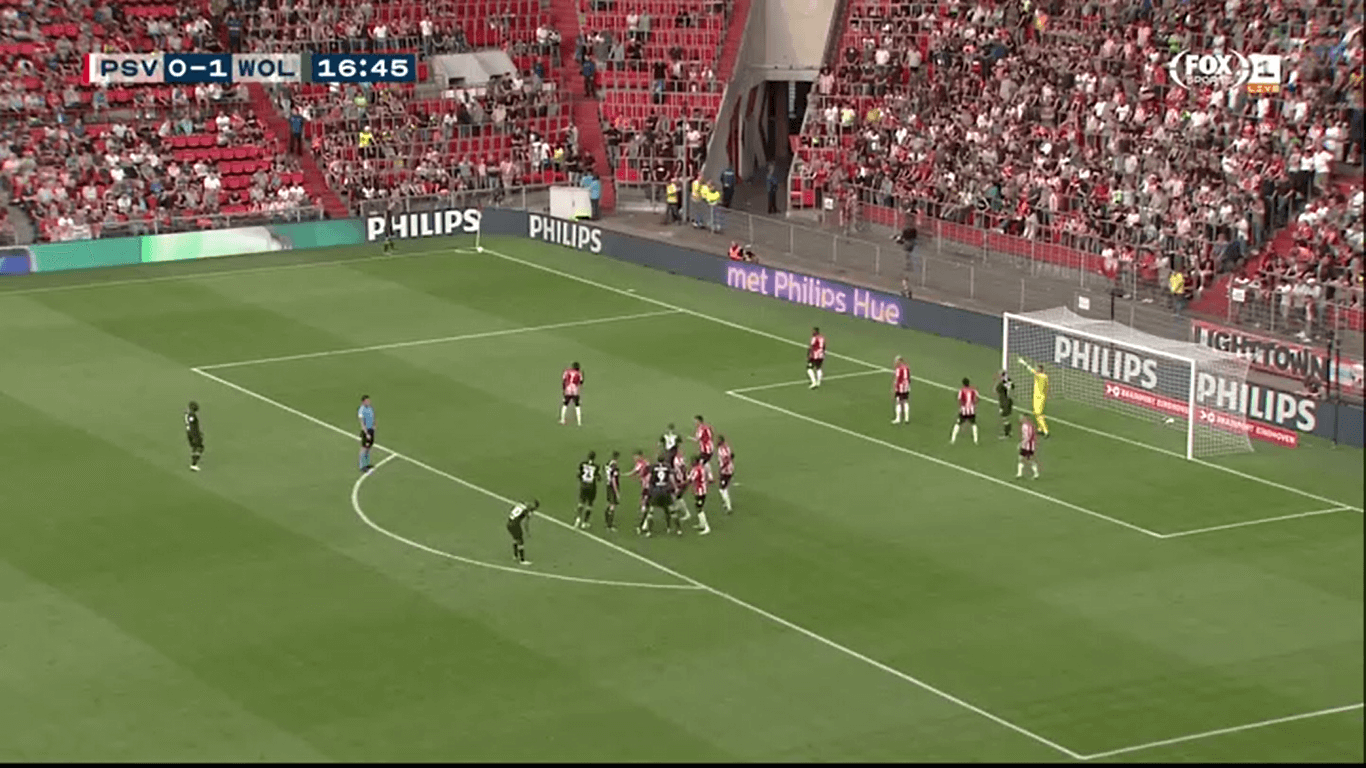 From this, the players start their movements and try to occupy the box properly. For sure, the evolution of Wolfsburg’s set-pieces over the course of the season should be observed.

Against the ball, Glasner seems to think less flexible. It appears as if he already decided that a 5-2-3 is the way to go. The idea behind this is that this provides a good mix of enough men in the centre as well as coverage on the wings. 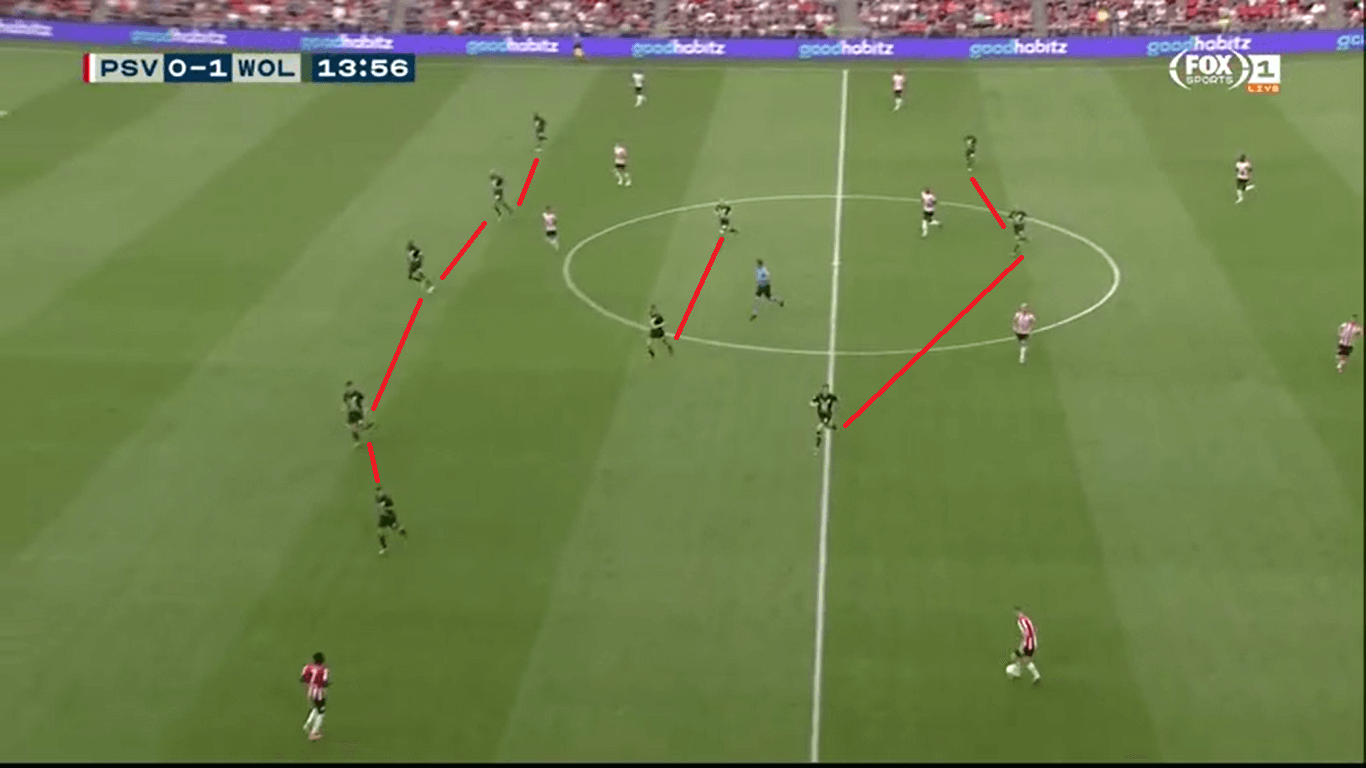 Here, we see an example of this formation. Playing with a back three, which always transforms into a back five, the main issue is to put pressure on the opponent’s full-backs. In all other areas, getting access is easily possible, but when the full-back are in possession of the ball, certain decisions have to be made.

In this example, the right-winger is the nearest player to the ball. Therefore, he has to move out and pressure the opponent. However, the right wing-back might also move forward, if the whole backline is able to switch to the wing and close the gaps. This is highly dependent on the situation and requires good communication on the pitch. The right centre-back for an example constantly has to coach his wingback and tell me whether he can move forward or not. 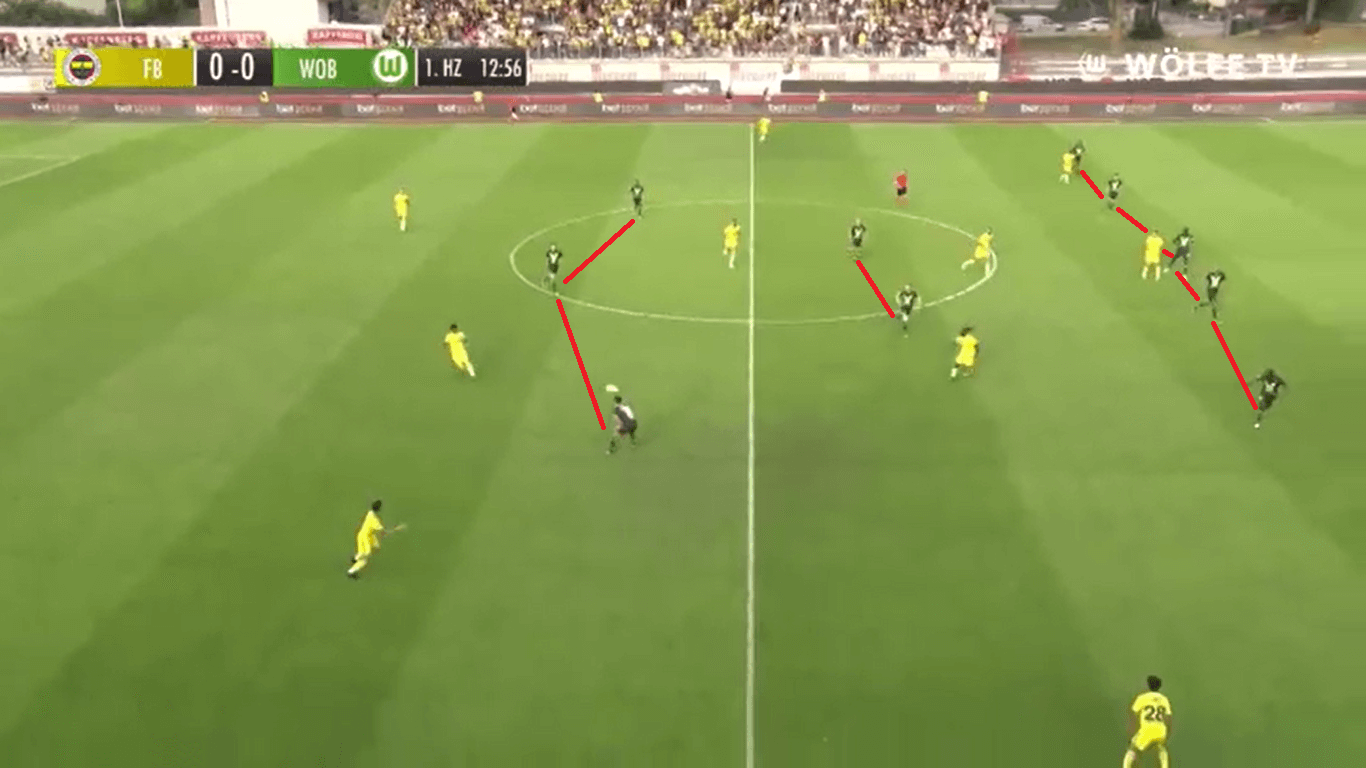 While the 5-2-3 strengthens the wing defence, it may weaken the half-spaces. In the image above, the left-winger focusses a bit too much on the opponent’s right-back and thus leaves the central passing lane open. The two central midfielders are not able to defend the whole width of the pitch on their own. In such situations, it may make sense that one centre-back moves out of the backline and defends forwards. This appears to be one small detail to work on as well.

However, Wolfsburg seem to be quite stable apart from such small problems. Especially the high press is pretty good already. 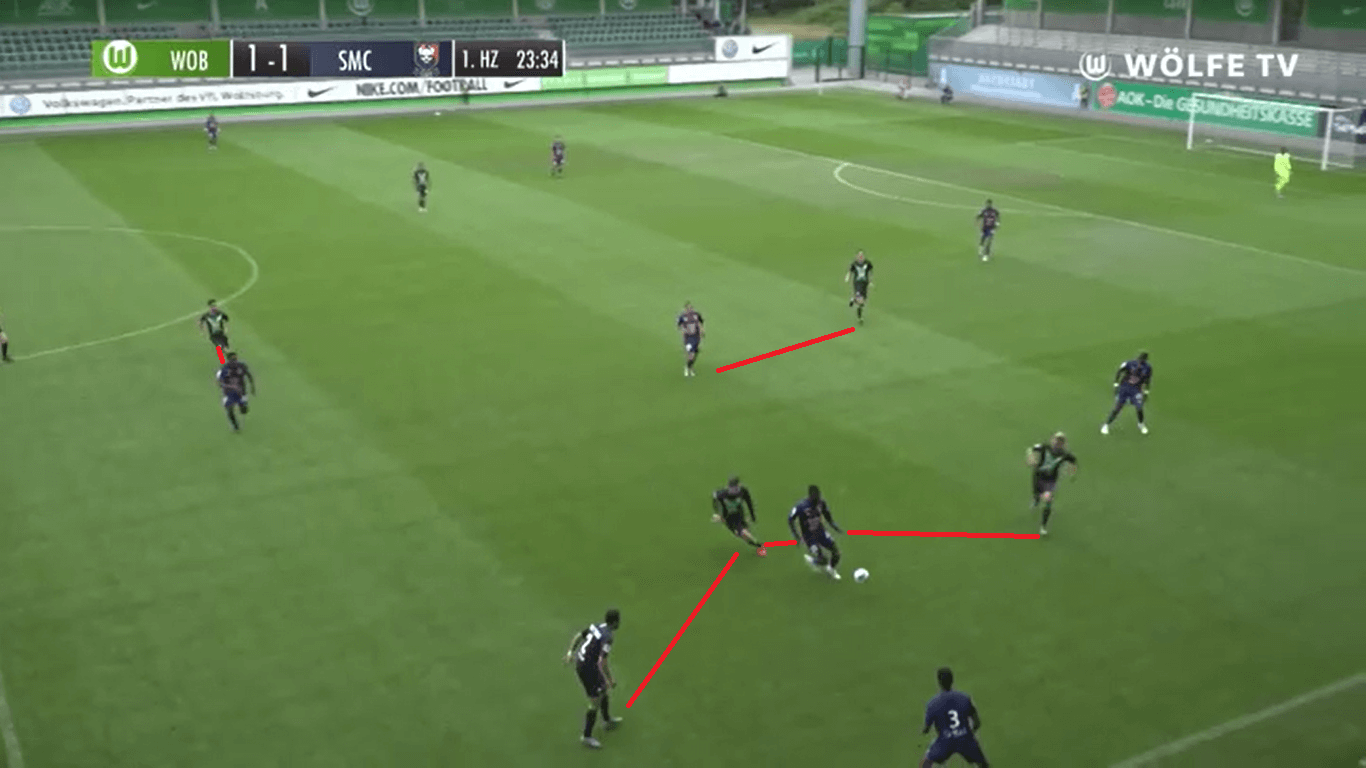 Like in this image, Wolfsburg force the opponent to the wing and then shift their aggressively. Here, they have a 3 vs 2 advantage on the wing. Thanks to this numerical superiority, winning the ball there is likely. Also, the players in the centre are close to their opponents and mark them tightly, making it impossible for the opponent to find a solution.

Leading the opponent to the wing starts early on with the striker’s press. We see an example in the image below. 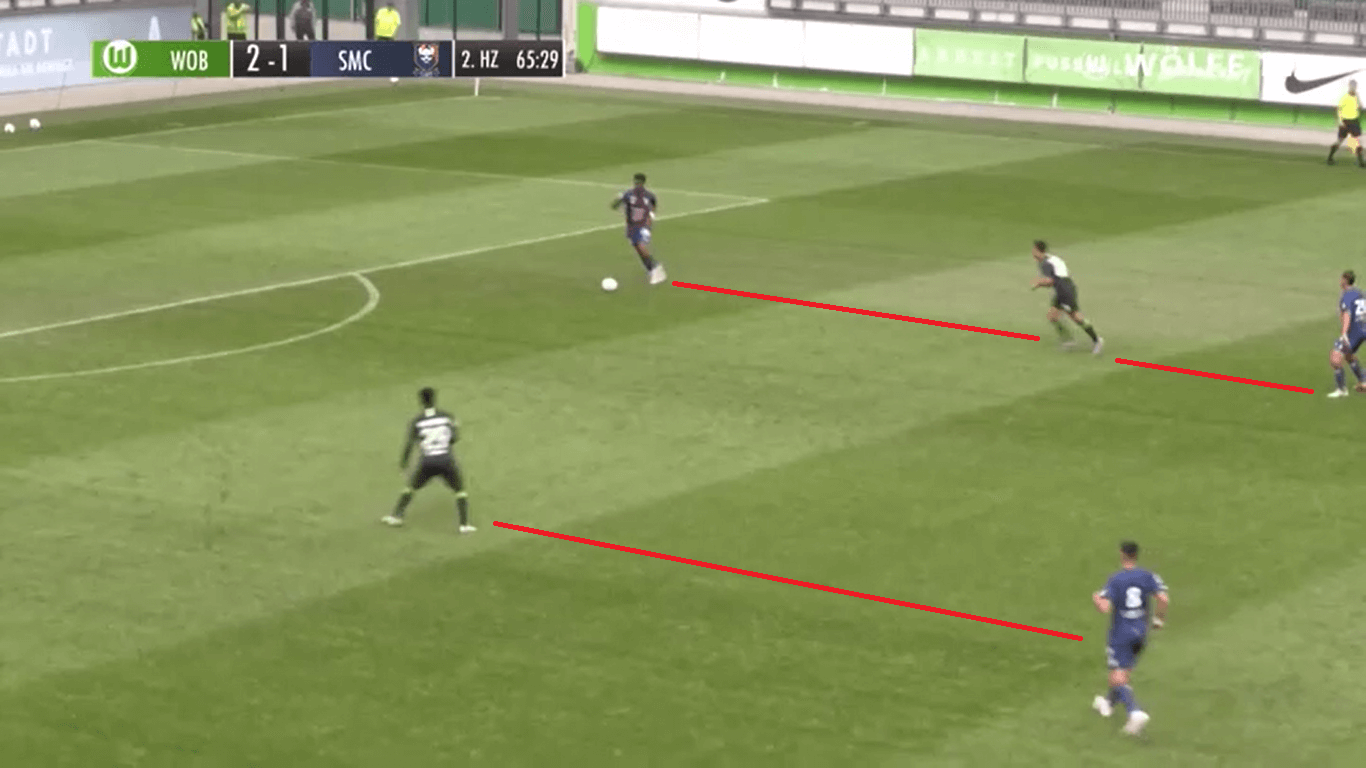 While the striker near the ball uses his cover shadow and prevents a vertical pass into the central midfielder, the second striker realizes that he has to close the passing lane into the centre as well. As he does so, the build-up forcefully continues on the wing, where it is easier to press. In the end, this helps Wolfsburg in establishing a stable defence, but may also lead to some great counterattacking positions when they win the ball high up the pitch.

Wolfsburg seem to be in great shape early on. Even though the new coach has only been there for some weeks, they have shown some interesting signs of a potential surprise. Their build-up as well as their off-ball movement in the final third looks promising. Defensively, they seem to be stable as well and may hurt many teams with their aggressive press.

However, there are still some minor issues that they need to sort out. This is perfectly normal though, since Glasner did not have enough time. With more time, it seems probable that this team will further improve. If so, Wolfsburg will for sure be a side that one should keep an eye on.