Birmingham City have acquired defender Jake Clarke-Salter on a season-long loan deal from Chelsea. The England under-21 international captained his country at the recent European Under-21 Championships and has spent time on loan at Vitesse Arnhem, Sunderland and Bristol Rovers previously.

A highly-rated young player, he played 28 times whilst on loan in the Netherlands last year – the most prolific spell of his young career – yet has featured only 24 times in this country. In this scout report, we will provide a tactical analysis of Clarke-Salter and his game, and use our analysis to look at how he may fit into Birmingham’s team and their tactics ahead of the forthcoming season.

Where will he operate?

New Blues manager Pep Clotet – who took over the role after his former manager Garry Monk was dismissed in the summer – has operated with both a back four and a back three over pre-season, and Clarke-Salter’s presence within his available squad is a big reason as to why both formations are possible. He is naturally left-footed, and so provides a great balance to any side he lines up in, in that he gives symmetry to any right-footed partner or partners. This allows the side to be in equilibrium when attacking and ensures that attacks from deep are not funnelled down the right-hand side as a result of a lack of left-footed competence in defence.

As can be seen in their latest pre-season friendly against Brighton & Hove Albion, Clarke-Salter lines up alongside central defensive colleagues Marc Roberts and Harlee Dean – both of whom are right-footed players. Yet, of course, Clarke-Salter’s preference on his left foot gives a rounded feel to the defence as it allows them to utilise the whole width of the pitch when in possession, and thus make it harder for the opposition to contain their offensive movements.

Clarke-Salter is very much a modern-day defender in that he is very comfortable with the ball at his feet, exempt at constructing attacks from deep through either feeding teammates higher up the pitch or stepping out with the ball himself.

As is the case with many players who progress through academies in the current day and age, the 21-year-old has good distribution and confidence when in possession, making him a vital part of any team that looks to pass the ball out from the back.

As can be seen below, Clarke-Salter has the ball in acres of space – as a result of France’s mid-to-low block 4-5-1 in evidence – and so could advance further out with the ball in order to try to gain his side more territory and also entice out the French press: when they had been drawn out, he and England could look to play through the gaps created.
However, he opts to play a raking diagonal pass over to winger Demarai Gray instead.

In another example of his smart use with the ball, he can again be seen below stepping out of defence with the ball when the space in front of him allows him to. Yet here, as opposed to playing a cross-field pass he opts to clip a pass over the defence and onto the run of forward Dominic Solanke. This demonstrates his capabilities at first surveying the whole picture in front of him, but then being able to distribute the ball out throughout all horizontal areas ahead of him.

As well as his use when offloading the ball, the Londoner has also shown his skills when it comes to moving out of defence in order to overload the opposition centrally. When freed up to do so, he is able to break defensive lines with his direct running through the heart of the opposition and give an overload to his team. An example of such is below, where, he moves out of defence with the ball. He is confident enough to do so and eventually reaches the opposing penalty area before feeding his teammate out wide.

If Clotet continues to rotate the systems throughout the season – and wishes to build a team capable of dominating possession and building attacks from deep – then Clarke-Salter’s ball distribution will be key in the overall success of the system. His presence as the only left-footed defender means that the task falls to him to offer different options in ball usage in comparison to his defensive partners.

Furthermore, his will to step out with the ball will be crucial if operating as a defensive trio. If all three central defenders are hesitant in doing so then it can create a stagnant attacking unit with limited options. Therefore, if he can really drive high with the ball then this will allow his wing-back to operate almost as an out-and-out winger and also encourage the attacking midfielders within the side to stay central – thereby give his team greater balance and options both horizontally and vertically.

In such a physically demanding league such as the Championship, it is imperative that any central defender is able to dominate aerially.

Clarke-Salter is no exception to this rule and has shown his capabilities at doing so. In both examples he positions himself between the man and the ball in order to give himself the best chance of firstly ensuring his direct opponent does not get to the ball, and secondly to try and win the ball himself.

In both graphics, he ensures that he is goal side and partially side-on to his opponent. This positioning allows him to be able to react to any movements quickly, as he is on his toes and able to push off in any direction to deal with where the ball goes.

If starting in the backline that took to the pitch against the Seagulls then he would be the shortest of the three at 6’2” tall – Roberts is 6’4” whilst Dean is 6’3” – and so it may be that teams look to target him as a result of his lesser stature in comparison to his nearby teammates.

A notable area of Clarke-Salter’s game he can improve on is his relative positioning when the ball is on the floor. He has a tendency to situate himself too wide in relation to his colleagues, which allows his side to be carved open centrally as a result.

In the below example – where he is operating as a left-back – he is far too wide horizontally and away from the left-sided central defender. This positioning opens up a huge space – as is indicated by the highlighted square – for the man on the ball to play a pass through and feed the right-winger.

In addition to this, Clarke-Salter’s body positioning is closing off the opponent behind him meaning that he is unaware of his movements and where he is positioned. If he was two yards tighter horizontally then this poor positioning could be accounted for, as a through ball on his inside would be much harder – as it is, it only accentuates the problem. 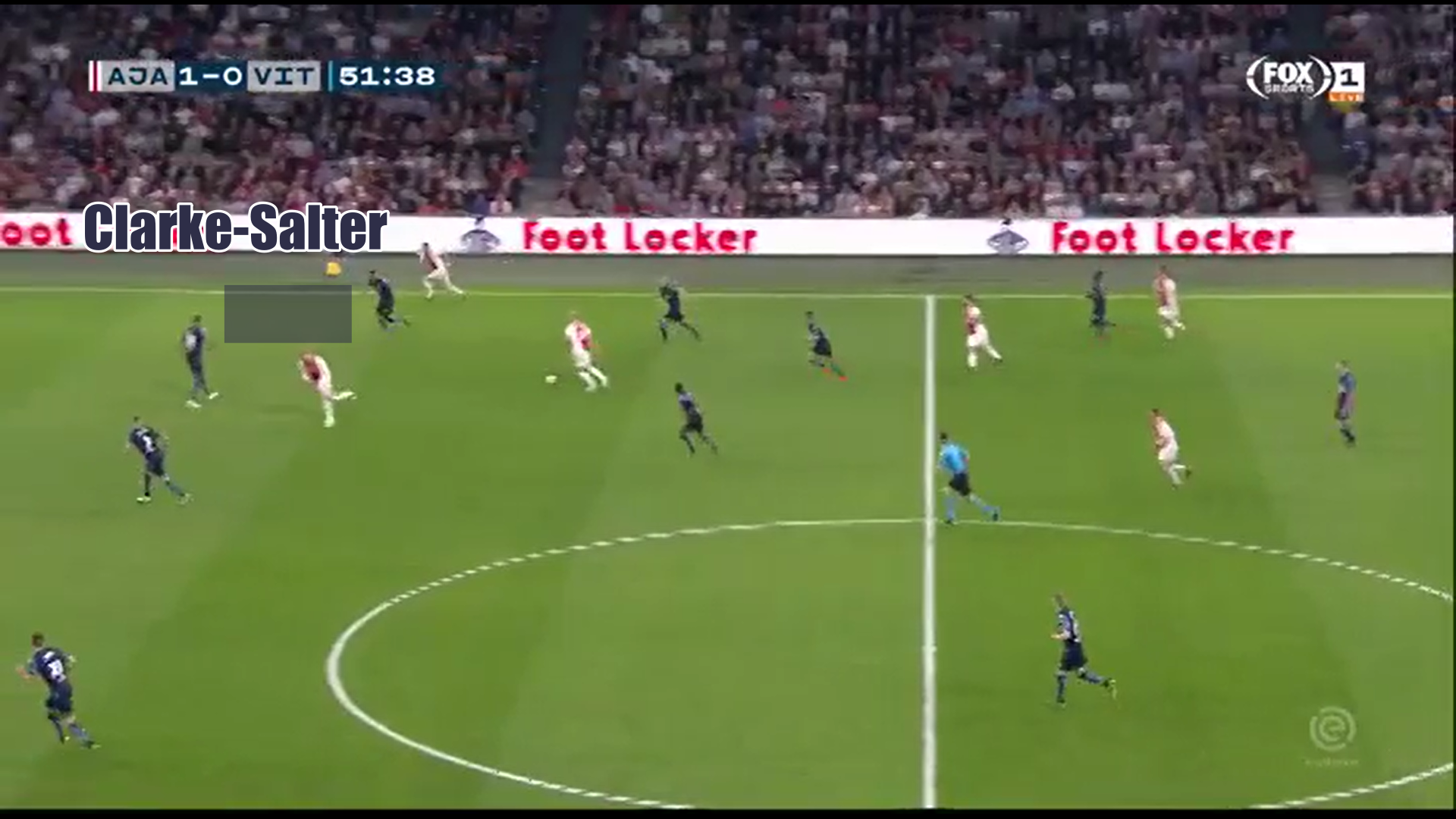 In the second example (seen across the below two images), where he is playing as a left-sided central defender, he is far too slow to react to the ball turnover in central midfield and thus gets caught out. As he is caught square – i.e. not side-on – then he cannot move easily to react to any possible through ball.

Additionally, he has no awareness whatsoever of the positioning of the striker – and so cannot track his run – and is also unable to inform his central defensive partner of the striker’s whereabouts either. As a result, a huge gap is opened through the heart of the Vitesse defence and they are played through far too easily.

No matter what formation Clotet opts for this year, Clarke-Salter must tighten up this aspect of his game if he wishes to become a solid Championship-level defender. Whether playing as a left-sided central defender in a back four, back three or as a left-back, he cannot put himself in a position to be beaten on the inside as easily as is shown above – or else he will be found wanting very quickly.

The defender has all the attributes to be a success in the Championship. He is physically strong, quick and aerially strong. However, as can be the case with many young, relatively inexperienced, players he is culpable of losses of concentration that can prove fatal – especially in such a demanding division. If he can improve this aspect of his game, and he is able to play the majority of the season, it will almost certainly improve him physically and mentally to allow him to kick onto an even higher level.