Axel Tuanzebe has been talked about in a positive manner among Manchester United fans for a long time. After an impressive loan spell at Aston Villa, many hope that he will be given a real chance in the first team next season. Ole Gunnar Solskjær has publicly talked of his excitement about Tuanzebe returning and maybe the 21-year-old will be given a proper chance to stake a claim for a starting berth. This tactical analysis will look at what Tuanzebe would bring to United and the statistics behind his successful season at Villa.

Axel Tuanzebe was born in DR Congo but moved to England as a child and joined Manchester United’s academy at the age of eight. He made his first-team debut under José Mourinho in January 2017 and was given his full debut at Arsenal a few months later when he shone at the right of a back-three. He then went on an injury-plagued loan to Aston Villa in the second half of the 2017/18 season before spending the full season this term at the Midlands club. Tuanzebe has impressed at centre-back for his loan club and has also made a few appearances at right-back.

Manchester United conceded 54 goals in the Premier League this season. The only club in the top 10 to concede more was West Ham (55). Therefore, it is clear that Ole Gunnar Solskjær needs to shore up the leaky defence. Tuanzebe will not start pre-season as a first-choice centre-back, but he could prove a useful option if he continues his development. Now, let’s look at what he would bring.

What stands out about Tuanzebe’s defensive attributes is his 1v1 defending. His speed and strength make him a very difficult defender to get past, and his positioning is usually very good. In the image below, we can see how Tuanzebe is defending a 1v1 against an attacker. His body positioning is superb, with his feet side-on to be able to move in every direction. 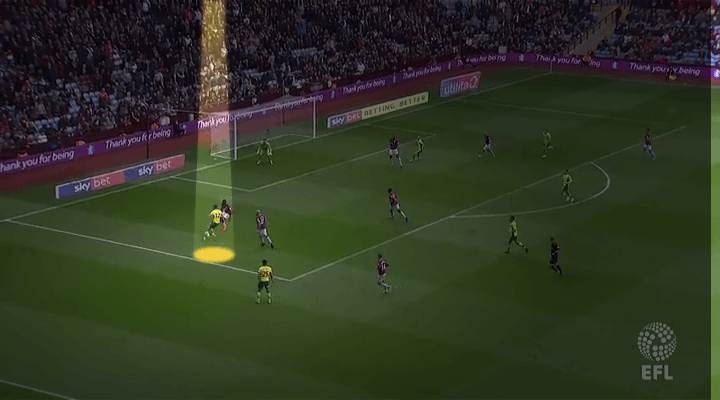 As we see below, where he has moved closer to the opponent, he uses his strength to muscle the attacker off the ball. This strength is a very useful tool in English football, with many strikers relying on their physical strength to bully defenders. Tuanzebe will not be bullied, rest assured. 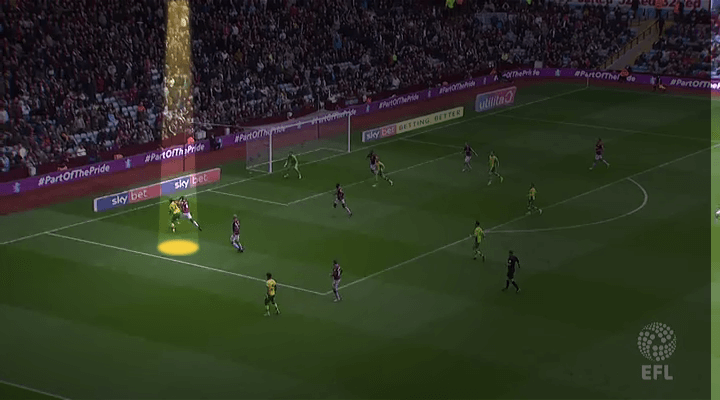 The scene below is another example of Tuanzebe’s excellent individual defending. In the first image, he has a perfect position where he can move with the attacker should he look to make a run towards goal. Additionally, he is also able to change direction to the way he positions his feet. 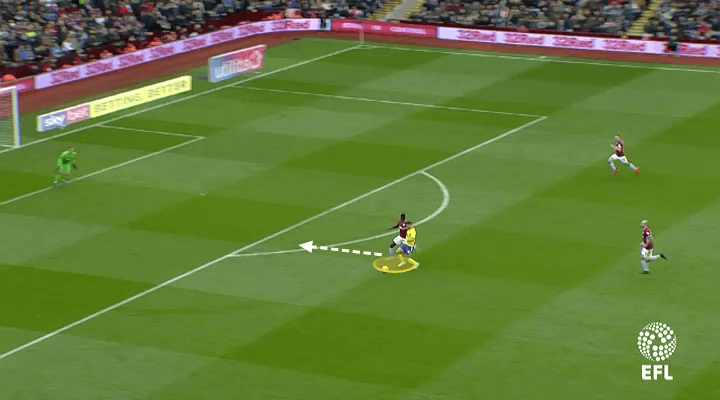 This is what has happened in the next image. As the attacker turns back, Tuanzebe can quickly stop and remain close to the attacker. With the attacker now facing the wrong way, Tuanzebe could step in tight and use his strength. 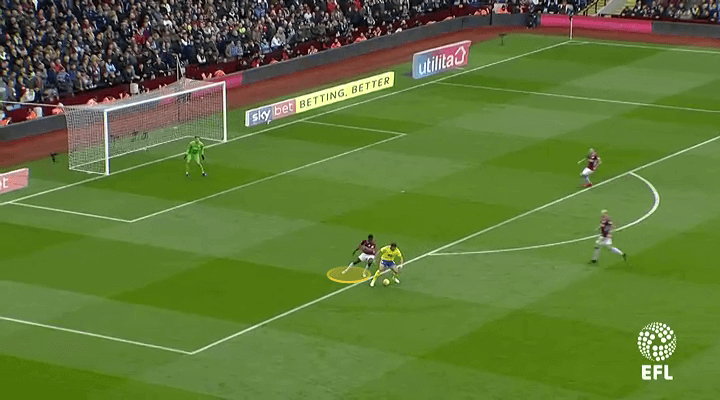 This is what he does and he goes on to make the tackle. Also, note how many Villa players have managed to get back due to Tuanzebe delaying the attacker for so long. This is something very few think about but by having strong individual defenders you can delay the opposition’s attacking transition and allow more of your players to get back to defend. 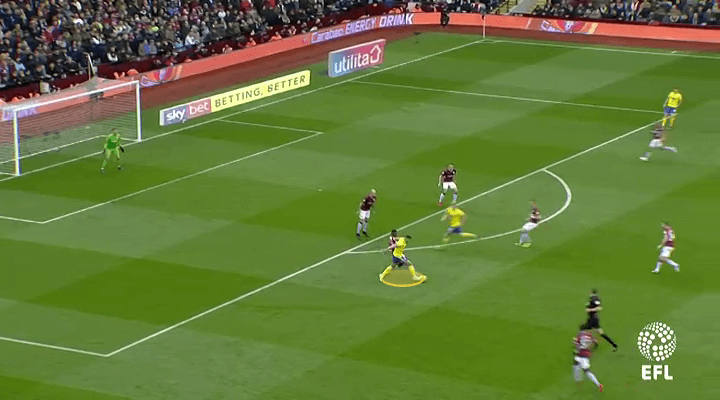 This last image again highlights Tuanzebe’s excellent positioning in 1v1 situations. His feet are positioned so that he can go with the attacker in whichever direction he decides to try. 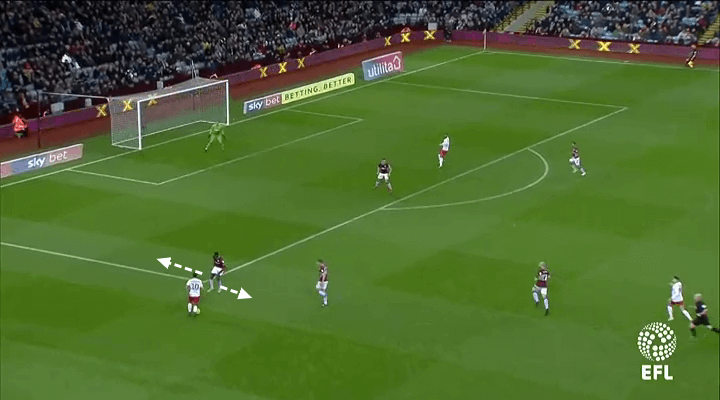 Tuanzebe also impresses with his positioning, highlighted by the 3.9 clearances he makes on average per game. These statistics indicate that he often finds himself in the right position. The image below is a good example of this positioning. As the cross is about to come into the box, Tuanzebe makes sure he sees the ball and the opponent closest to him by being side-on towards the ball. This also allows him to be able to cover a potential cross towards the first-post area while retaining the possibility to follow a run if the ball is played short into the striker.

This image below is another example. As the cross is about to be swung in, Tuanzebe is well-positioned to defend the far-post area (highlighted in white) which is his responsibility. He is side-on again and could theoretically move backwards, forward and to either side depending on where the ball would go. 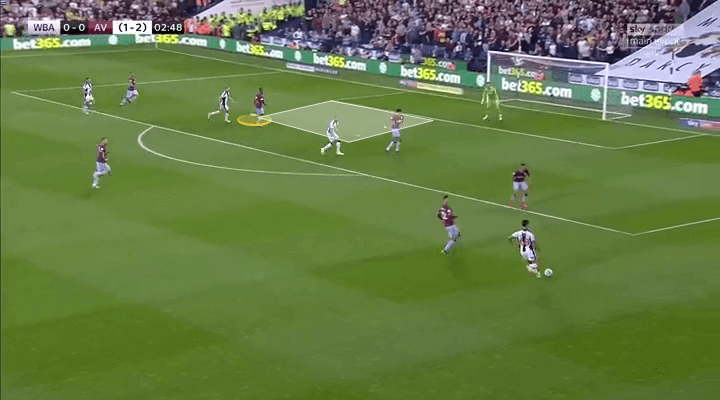 Tuanzebe must still improve this area of his game as he sometimes loses track of runners. This is mostly a sign of inexperience, though, and he will likely improve this with more games under his belt.

Despite his defensive qualities, Tuanzebe strongest claim to play at United next season will be his quality in possession. This is an area where United are very weak since none of their centre-backs is particularly good in possession. By contrast, Tuanzebe really is. He has completed 84% of his passes for Villa but his main strength is stepping out from defence with the ball. The image below highlights this ability. As he is being pressed by the striker, Tuanzebe dribbles into midfield and skips past three Middlesbrough players before he is brought down with a cynical foul. 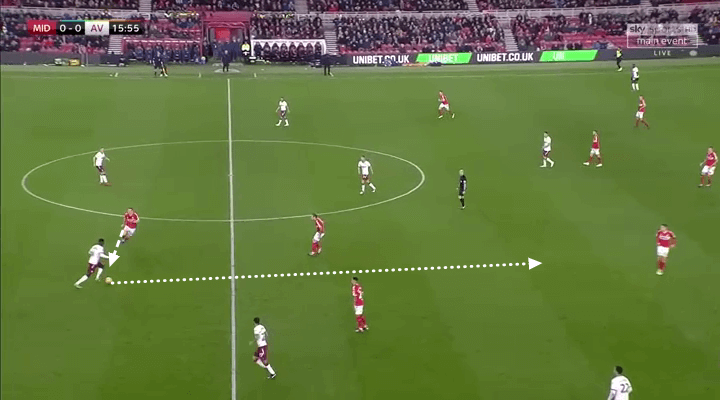 The image below highlights another example. Here, Tuanzebe is pressed by Jay Rodriguez but skips past him and steps into midfield. This ability to step out of defence with the ball is very rare among centre-backs and a big part of what makes Tuanzebe so exciting. It can be decisive against a deep block to have a defender capable of breaking the first pressing line and attract pressure from other players which would open gaps for the attacking players to exploit. Tuanzebe could, therefore, provide a unique option for Solskjær next season. 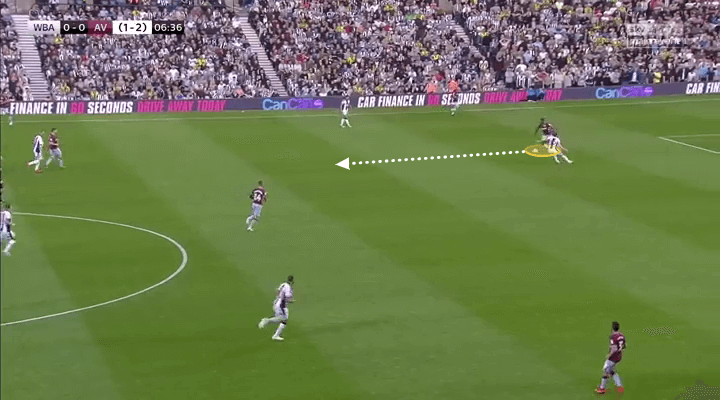 Axel Tuanzebe is a very good defender already but, of course, he is not the finished article. He still needs to develop a lot to be a regular starter for Manchester United. However, it’s not like the other candidates for the central defensive positions have done much to cover themselves in glory in the last few seasons. Therefore, Tuanzebe should be given a real chance to succeed at his boyhood club.