Furthermore, they finished in the seventh position in the Bundesliga and so they qualified themselves for the second qualifying round for the Europa League this season. They won their first leg against FC Flora 2-1 and in the second leg the scoreboard showed the same result after 90 minutes and so Adi Hütter’s team is through to the third qualifying round of the Europa League.

This tactical analysis is a season preview which will look at Eintracht Frankfurt’s squad and will use a pre-season friendly against Luzern as well as the two games against Flora to predict how they might play this upcoming season.

Due to their amazing run in the Europa League during last season, several clubs took notice of some of Frankfurt’s players. However, they were able to keep most of their important players and in addition made some interesting transfers. Their current squad is made of 33 players but it’s still possible that some players leave or join the club. The average age of Frankfurt‘s players is 26.2 which shows that they have a good mixture of young talents and more experienced players. Here’s their current squad ranked in each position after their current market value from the highest to the lowest:

There are still two big factors which could influence the season heavily. Firstly, they’ll need to buy another goalkeeper since none of the current three goalkeepers is on the level to play for a higher-ranked Bundesliga team or in the Europa League. Kevin Trapp from PSG who was last season at Frankfurt on loan and is currently their main target to solve this problem.

Secondly, after the departure of Luka Jović and Sébastien Haller, they lost their two most important goal scorers of last season. Together they scored 47 goals. Even though they signed the young talent Joveljić, it will be very important for them to hold Rebić since he’s currently their best striker and an important workhorse.

This season they used the same system as they did last year when they played most of the time with a 3-5-2 and 3-4-1-2 respectively. In the image below, you can see probably Frankfurt’s best starting eleven in the first leg against Flora.

As this analysis showed above, Frankfurt will stick with their 3-5-2 system. That’s logical since it worked so good during last season and besides, they have the appropriate players for this system. Hasebe, who usually played most of his career in the central midfield can use his passing accuracy and experience as the central part of the back-three.

Kostić and Da Costa who have the stamina, determination and all-round qualities to play as wing-backs. Besides, a huge amount of players who can play in the central midfield. There are several young talented midfielders like Kamada or Sow, players who are one step ahead of their primes like Gaćinović and Kohr, and experienced central midfielders like Fernandes or Rode.

Their 3-5-2 gets visible during the build-up. The two wing-backs position extremely wide to provide the width and create some distance between themselves and their opponents or to stretch the opponent. One or two central midfielders stay a bit deeper to provide short passing options. The remaining midfielder or two midfielders try to find free spaces together with the two strikers. This gets visible in the shot below. 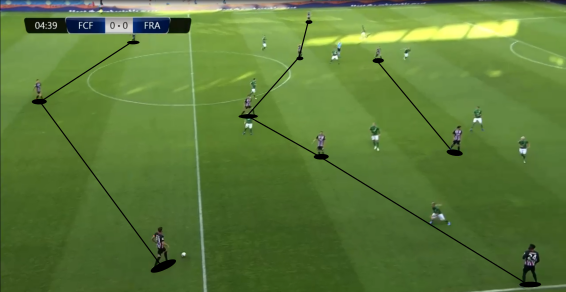 As already explained, Hasebe is very important for Frankfurt’s tactics. The 35-years-old Japanese has got a lot of experience since he made his senior team debut in Japan in 2003. He always radiates a sense of calm and often plays penetrating passes through the centre as you can see in the example below.

They generally try to build up their attacks with short passes through the middle. In the beginning, the ball circulates within the back-three and one of the dropped midfielders. Then they try to find a way through the middle with passing combinations. However, it’s always good to have several ways to progress the ball. In light of this, Frankfurt often use long balls to find their wing-backs who mostly position themselves so wide that they have a lot of space. This space gifts them the time to get the ball under control and to create something.

Versatility to get into dangerous areas

As already explained, the two strikers and the midfielders have the task to find free spaces and create passing lanes. Due to that they have a lot of freedom and are allowed to swap positions, drop and position higher. Especially Rebić often drops into spaces which a striker normally wouldn’t occupy.

The example in the next two images shows such movements and the freedom of the players which gave Torró so much space that he had enough time to score a beautiful goal from outside the penalty box. The right part of the back three Abraham is on the ball and looking for a passing option. This time Gaćinović dropped deeper during the build-up and so Torró and Kohr are the higher positioned midfielder.

Kohr makes a diagonal run and the opponents’ central midfielder of their 4-4-2 formation follows him. Due to that, nobody occupies the centre. Paciência pins the two centre-backs because of his high positioning in the centre. The second striker Rebić dropped deeper in the left half-space where Flora’s right-winger marks him and Kostić once more positions wide to stretch the opposition and lure the right-back out wide. Due to this freedom of the players combined with Kostić’s typical wide positioning, Torró has enough space and time to score from distance.

Frankfurt often use their three midfielders together with their two strikers to create numerical superiority in the centre. With that superiority, they can create several passing lanes to circulate the ball. Logically the opponents often try to put pressure on them in these situations since mostly the teams focus on defending the centre.

Because of that, the opponents tighten and compensate for the numerical superiority of Frankfurt. However, exactly these movements of the opponents open up more spaces in the wide areas for the two wing-backs and so Hütter’s team tries to exploit exactly these spaces after some passing combinations in the centre as you can see in the example below.

The two wing-backs are in general very important for Frankfurt’s attacking style of play. Their wide position either creates space for the players in the centre or the wide areas for themselves. But Frankfurt use their wide positioning for another two patterns.

Firstly, they use two diagonal passes one after another since these passes are in general the ones which are the hardest to defend against. The first diagonal pass goes out to the wing-back who then tries to play another diagonal pass as quickly as possible further up into the centre to find a striker or high positioned midfielder. When these two passes are executed fast after one another it’s extremely hard for the opposition to defend against since in the moment when they shift over to the respective site, instantly the ball is passed back into the centre and the players are not exactly organised.

Furthermore, Frankfurt use their wide positioning and their pace to get behind the last line of the defence with through passes. These passes are especially then effective when the passer of the ball is positioned in the half-spaces and plays a vertical pass through the gap between the opponents’ full-back and centre-back like in the image below.

Pressing on the wing

As soon as they successfully forced the opposition into the wide areas, the wing-back puts pressure on the opponent. But it is important that he does this with full determination since he is alone on the wing. Also, the remaining players have to shift over to the according side and push forward. Especially the respective centre-back has to mark the vertical passing option along the touchline.

Of course, such a pressing only makes sense when the whole team takes part. As soon as one player is caught out of position, the pressing is unlikely to be successful. Usually, the players in the centre use a very man-orientated pressing to shut down all passing options in the centre and the opponent in the wide area has no other option to either play a long ball or go into the one-on-one with Frankfurt’s wing-back.

This man-oriented pressing gets visible in the image below. The ball is passed to the player in the wide area and Frankfurt’s wing-back Durm instantly puts pressure on him. One striker closes the passing lane to the near defender and the other striker cuts of the long passing option to the opposing centre-back. The central midfielders try to mark the opponents in the centre.

This scout report showed that especially Frankfurt’s offensive style of play is very variable and their pressing on the wing is hard to play against. They need to keep Kostić and Da Costa who both already know Hütter’s system already showed great performances as wing-backs.

It will be interesting to watch if Rebić stays at the club and if they can get a new goalkeeper. These two aspects will be very decisive for the rest of the season. In addition, they have to compensate the departures of Jović and Haller but maybe the young Joveljić can fulfil these roles together with Rebić upfront.