There are few transfer deals in modern football that have been more one-sided than the signing of the Serbian forward Luka Jovic by Eintracht Frankfurt from Benfica. Jovic was initially signed from boyhood club Red Star Belgrade by the Portuguese giants but he was then allowed to join Frankfurt on a two-season loan with a clause that allowed the German side to sign the Serbian for a nominal fee, believed to be under £10M, at any point during the loan. Over the course of his two years in Germany, the football world saw Jovic develop into one of the most sought after forward in football with his ability to score almost any type of goal leading to huge plaudits. At the end of the 201/19 season, Frankfurt exercised their right to sign Jovic permanently and then flipped the striker to Spanish giants Real Madrid for a reported £60M.

That left Frankfurt with a huge hole to fill in their attack with a role open to partner the excellent French striker Sebastien Haller in coach Adi Hutter’s tactical system. What few expected, however, was that this replacement would not only come from Jovic’s old club, Red Star Belgrade but from the strikers home town of Bijeljina. This replacement forward is the Serbian U21 international Dejan Joveljic.

The similarities between Jovic and Joveljic do not end there although the latter is two years younger than the former both share a similar skill set and an unerring eye for goal that has set them apart in their careers so far. Both are primarily goalscorers although at their respective developmental stages I would argue that Jovic is more capable of dropping out of the penalty area in order to link play. In this tactical analysis, we will, first of all, compare the two forwards from a statistical perspective before taking a tactical look at Joveljic.

Drawing any form of direct statistical comparison between two players at varying stages of their career can be difficult. Especially when one of the two players involved has performed at near elite levels over the course of the last season. Let’s take a look at Jovic’s numbers for Frankfurt last season.

Across all competitions, he played 4,268 minutes in the 2018/19 season with a return of 30 goals and five assists. Given that his expected goals(xG) came in at 22.9 for the season he outperformed that advanced metric. This comes as no surprise when we look at his shot chart for last season. 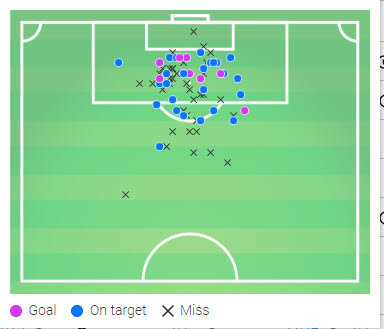 As you can see Jovic was not averse to having a shot from outside the penalty area. This, of course, means that his xG value over the season will appear lower given the reduced changes of scoring from these areas.

Those metrics are unlikely to be met by a player who has only just started to play regular first-team football. What if we adjust our view on Jovic to consider an earlier season though? Let’s go back to Luca Jovic in his age 18 season, back to 2015/16. In that season Jovic played 1,356 minutes with six goals and five assists and an xG value of 7.49. Now, let’s look at his shot chart for that season. 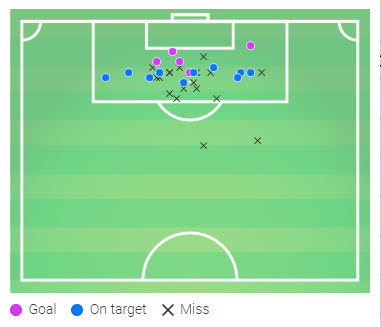 A vastly different picture from the first shot map that we looked at. Back when he was 18 and learning his trade Jovic was a more traditional penalty box striker with little shooting from deeper areas. If we look at Jovic’s heat map over that season we see that despite signs that he was a forward who played across the width of the pitch his main focus was still on the opposition penalty area. 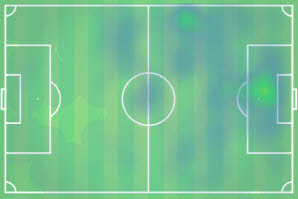 Now, let’s consider Dejan Joveljic last season which was spent, of course, with Red Star Belgrade. Over the course of the season, Joveljic played a total of 1466 minutes with 11 goals and zero assists and an xG value of 9.01. His shot map also offers interesting viewing. 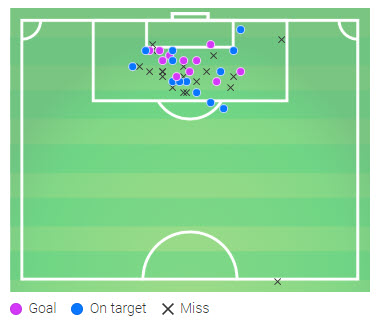 Very little activity outside of the penalty area for Joveljic. While we have already seen that Jovic is capable of looking for goal from further out his younger compatriot is far more comfortable in and around the penalty area. This is where the two Serbian forwards start to separate from one another. While Jovic is more likely to look to link play and aid the build-up we see Joveljic very much come alive in and around the penalty area. This style of play from Joveljic is very much backed up by our tactical analysis.

The strengths of Joveljic’s game lies in his ability to find and create space in the final third. The young Serbian has an innate ability to find and exploit pockets of space in tight areas, this is something that we tend to see in top goalscorers at all levels. At times it seems almost accidental as you watch the forward almost look disinterested in the penalty area. Then the ball will break and invariably Joveljic will be positioned in the right place to collect the ball and get a shot at goal.

Here, we see Red Star building up in the wide area an looking to access the space in behind the opposition defensive line. In these positions, we start to see Joveljic come to life as he moves in order to both create space and be ready to exploit the space that the ball could be played into. As Red Star move the ball with the first pass in the image above we then see that Joveljic has already shifted to be positioned in between two defensive players. As the ball is then played beyond the defensive line the forward is positioned to attack the space and move into space to threaten the penalty area.

We see a similar scene in this example as Joveljic moves to take advantage of a lapse of concentration from the opposition to find space in the penalty area. This period of the play comes from the second phase of the attack as the opposition had originally cleared the ball away from their area. Now, as Red Star pick possession back up the defensive block for the opposition has collapsed back to the edge of their own penalty area. 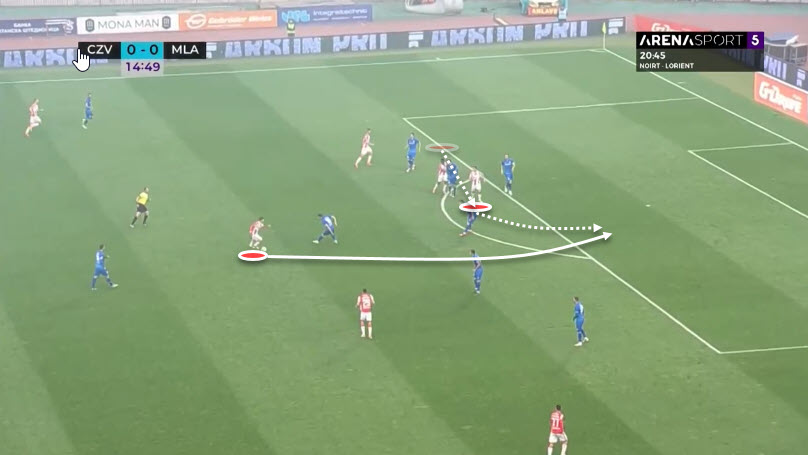 The run from the forward comes across the face of the area on the blind side of two defensive players. His movement is sharp and quick and before the defensive line can react the ball is played through and finds Joveljic moving into the area for a chance on goal. 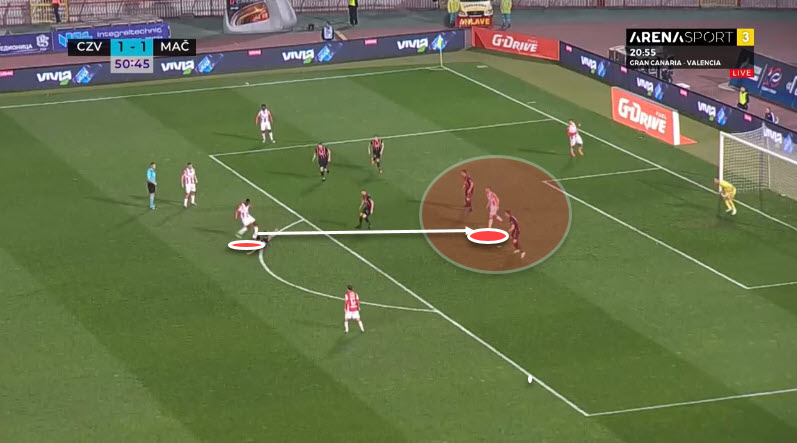 Time and time again we see Joveljic in little pockets of space in the penalty area. He just seems to drift away from defenders and is constantly finding 2-3 yards of space in tight areas. These spaces can make the difference between a forward getting a shot at goal when the ball breaks to him and getting crowded out when defenders are too close to him.

We see this above with a midfielder in possession shaping to shoot. Even then Joveljic is right in the heart of the penalty area and positioned between the two defensive players. In the event, the initial shot is poorly struck and the ball breaks to Joveljic and he is able to get a shot in on goal. Without the initial movement and positioning, this would not have been possible. 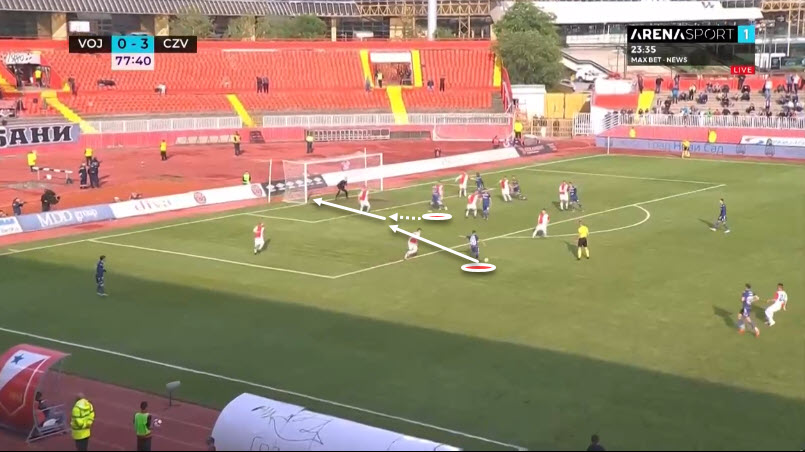 There are times when Joveljic scores a goal and it looks lucky but again this is a mark of a great goal scorer. For those of you that remember the Italian forward Fillipo Inzaghi this will strike a particular chord. Inzaghi was a great scorer who always seemed to be in a position to score ‘lucky’ goals. Joveljic shares a similar trait. We see one such example above. As the shot is hit from the corner of the penalty area we see Joveljic moving across the face of the goal and as the goalkeeper is moving to his left Joveljic gets a touch on the ball and changes the path of the shot to score.

We see a similar example above. Once again the first thing to note is that Joveljic is immediately positioned in a pocket of space between defensive players. As the man in possession tries to dribble past the two defensive players closest to him the ball breaks away and lands, of course, at the feet of Joveljic who is able to turn and slot the ball past the goalkeeper.

I started this piece by essentially drawing a comparison between Luka Jovic and Dejan Joveljic. The comparisons are numerous and easy to make. The thing is though that comparisons, although useful to a point, do not tell the full story. Frankfurt will without a shadow of a doubt miss Jovic this term. He was a talisman for the club for much of last season and his goals were incredibly important. Joveljic is a really interesting replacement but one that will need time to adapt to a new country and a more difficult level of opposition.

Given time to settle, however, Frankfurt may well have found themselves a true goalscorer that can fire them up the Bundesliga table.