In the early rounds of the UEFA Europa League qualifiers, Eintracht Frankfurt were looking to start their season in the right way, and look to leave behind a summer which has robbed them of their previous squad of last season, who was so successful in this competition. Their opposition, FC Flora, made it difficult for them at times, but the game was an inevitable reminder on just how much they may miss their departed men Jović and Haller, and also highlighted some problems within Frankfurt’s offensive movements. In this tactical analysis, I’ll look at both of these subjects and see how it affected the game.

Eintracht Frankfurt lined up in a 3-5-2, a slight variation on the 3-4-1-2 used last season. However, at some points in the game, Frankfurt did go back to this, but as I will explain in greater detail later, I don’t feel they did this enough and could have been much more successful had they utilised these tactics more. Flora meanwhile lined up in a 4-4-2, which set up an interesting deep block that Frankfurt had to attempt to solve. 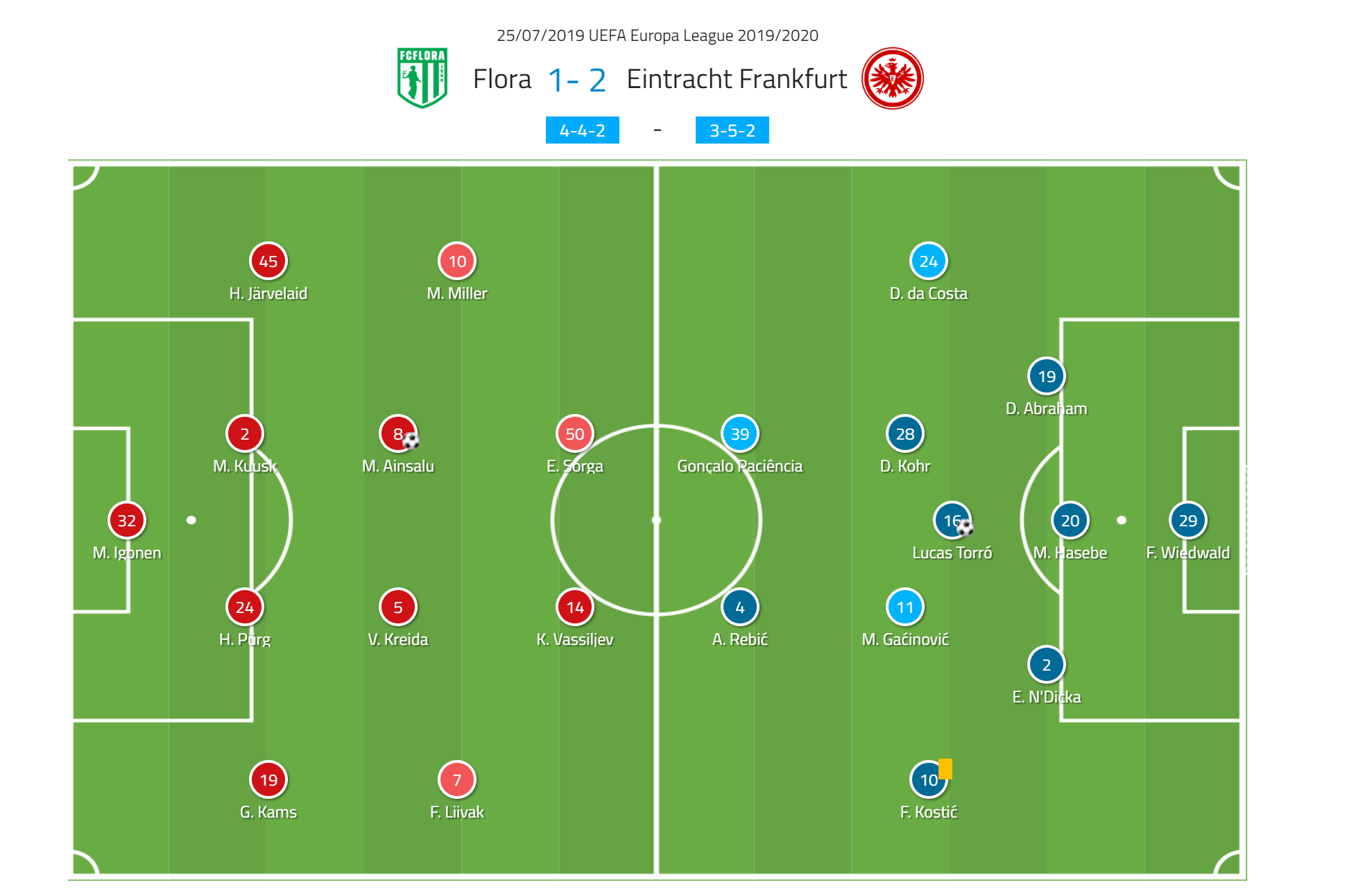 Being the underdogs, Flora sat back with virtually all their players behind the ball in a 4-4-2 shape as mentioned. This 4-4-2 gave them a good theoretical chance of hindering Frankfurt’s attacks, but it was clear quite quickly that Flora were going to struggle.

Below we see how I’m sure Flora wanted the game to go. Frankfurt (in red) are in their 3-5-2 while Flora (in green) are in their 4-4-2. In order to remain defensively solid, it made sense if the winger’s role was to press the wing-back as they are matched up. This leaves the full-back to stay as part of the back four and deal with the striker who is dropping into the half-space. 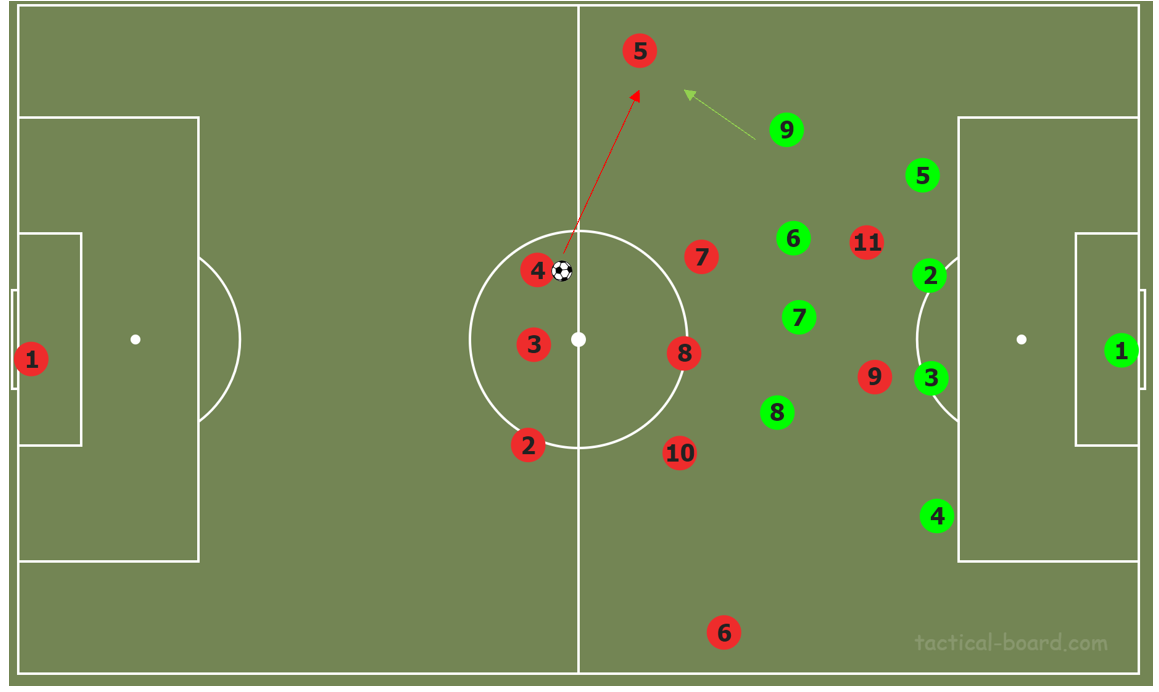 But, with the block so deep, Frankfurt’s wing-backs pushed on slightly higher which disrupted the block. Flora’s full-back then started to press the wing-back more, and with the winger not covering his position, Frankfurt started to exploit the space down the line and create chances. We can see Ante Rebić could be found with either a through pass between the full-back and winger or into the space behind the full-back.

We can see the same thing happening higher up the pitch below, where the full-back steps up again and doesn’t win the ball, leaving a massive space for Frankfurt to transition into.

Another key part of Frankfurt’s attempts to penetrate the block was to use their numerical superiority in the middle in the first half. If Frankfurt could stretch that midfield four enough, they could create a 3v2 in the central areas.

We can see this demonstrated below, where Hasebe plays a straight forward pass between the two strikers into the free man. The gaps between each player are massive, as the two central midfielders are focused on their opposite central midfielder. This means the player receiving the ball is effectively a free man in midfield, who then has the option of playing wide or through to the strikers. Seeing as the two strikers weren’t really contributing at all, it may well have helped Flora if they had switched to a 4-5-1 to overcome this numerical superiority. Later in the game they did fall into an almost 5-4-1. 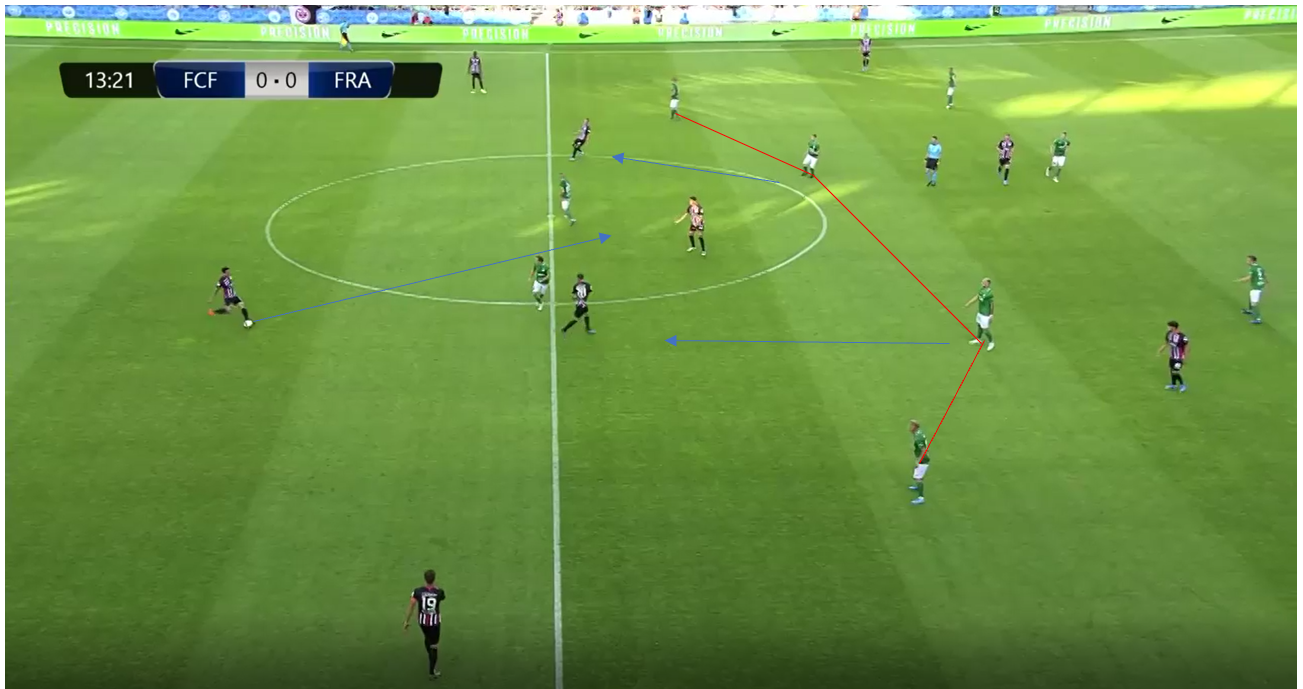 Flora’s deep block was pretty poor throughout the game, and as I’ve highlighted above, not particularly compact. Their defensive movements were often ill-disciplined as we can see in this example below. The winger moves out to press needlessly, and because Flora’s midfield is not tight against Frankfurt’s, Frankfurt can easily combine in the space left by the pressing winger.

With the wing-backs stretching play well, Frankfurt started to play in the same two half-spaces, between the central midfielder and the winger, or the full-back and the winger. Here, Rebić drops into space to easily receive the ball. He can then only really combine with the player on the wing. Last year Rebić would be dropping into this position to feed into Haller and Jović. But because in this game Rebić was upfront, when he dropped into these half-spaces because nobody else was, he had little options to pass to. In this case, one of Frankfurt’s midfielders does come across to drop into Rebić’s striking position, which gives him an extra option. But this didn’t happen enough in the game.

Here we see an example of Frankfurt’s poor movement in midfield. Here Gaćinović stays in his actual position in red, which blocks a passing lane to one of his own teammates. There is also a massive space to be exploited where he could easily make a run into (highlighted by the faded image), where even if he is followed he will create more space in the central area. He instead stays in this position, and Frankfurt just play laterally until they switch the play.

There are so many combinations to be had from just this situation alone, and even if Gaćinović doesn’t make this movement there are still other movements for him to make. For example, we can see Paciência dropping deeper to receive the ball, just as Rebić did in a situation highlighted earlier. Gaćinović could make a run that would allow a third man pass to be made to him by Paciência, but no players seem to recognise this and Paciência’s run is not used.

We can see another example of their midfield’s poor offensive movement below, where the wrong run is made which prevents the midfielder from receiving the ball in an excellent position. The midfielder makes the run highlighted in blue, where the space to play it through is tighter and where he is further away from goal. The run highlighted in red would make the pass easier for the wide player with the ball and would put him in a better position to combine with the wing-back. As a result, the midfielder is unable to get the ball and Frankfurt rebuild their attack.

Despite their win, Frankfurt will be a little disheartened by their performance as this analysis shows. Sloppy defending cost them a goal in the game, while they struggled to finish any of their 24 shots until Dejan Joveljić scored the winner. Their offensive movement was sluggish at times and looked rusty, but at the times where they cut through a poor Flora side with ease, they were unable to finish their chances. They certainly looked as though they had lost their most clinical players in the summer, but this is the first game of a long season for Frankfurt and so there is plenty of time for improvements to be made.