In the last round of the Bundesliga Eintracht Frankfurt visited Bayern Munich. There were still open questions before the match due to the fact that the title race between Bayern and Borussia Dortmund was yet to be decided, although Niko Kovač’s side had a 2 points lead. Meanwhile, Frankfurt after eliminated from the Europa League they still fought for the position in the Bundesliga. They could achieve fourth place with a win, thus both sides had goals which foreshadowed an exciting battle. This tactical analysis will look into how Bayern destroyed Frankfurt 5-1.

In the last six games between Bayern Munich and Eintracht Frankfurt, Bayern had a huge dominance with five victories and one loss but last time Frankfurt visited the Allianz Arena they won 1-3. 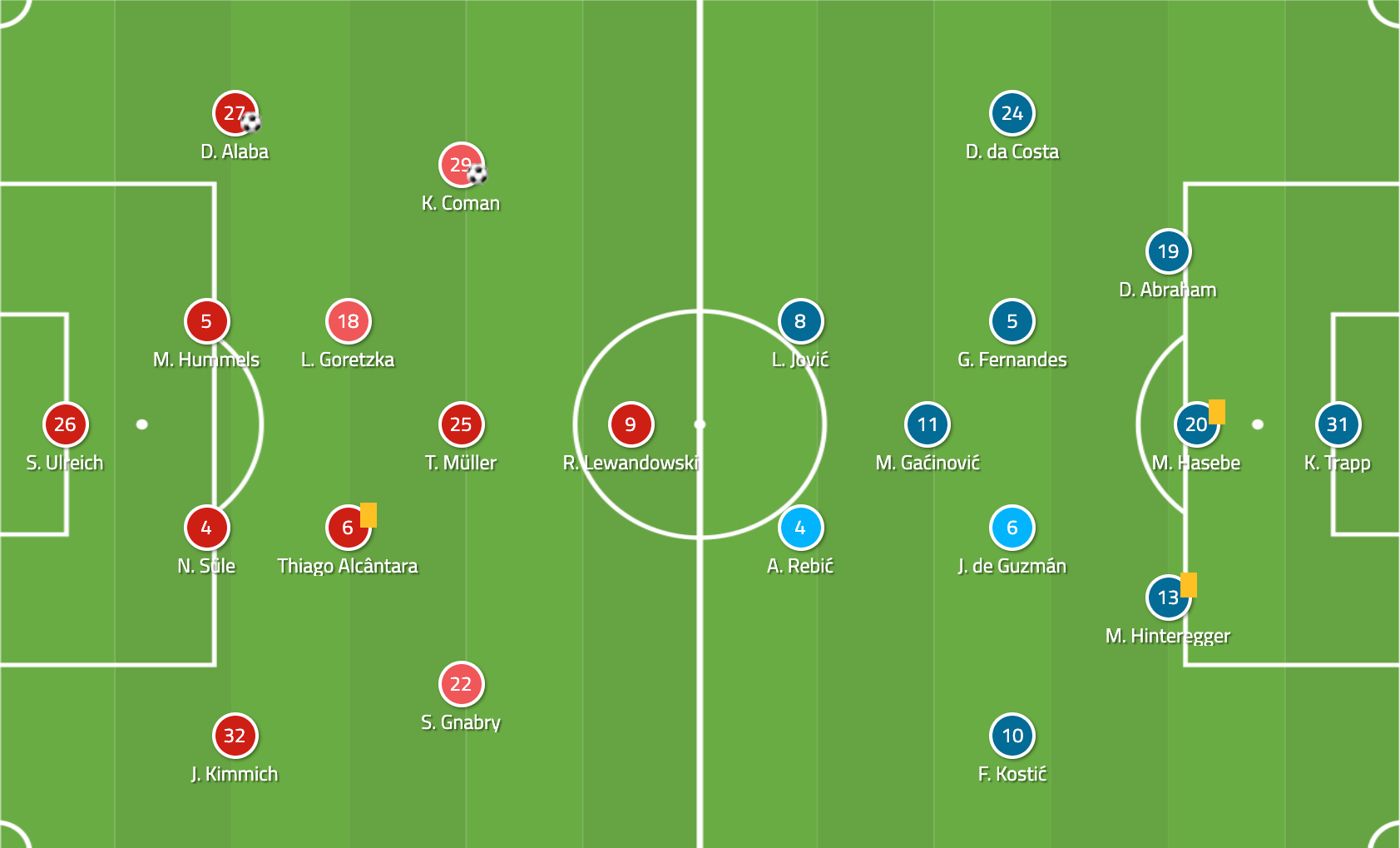 Adi Hütter fielded the usual three at the back system, although with some modifications. In order to give some more protection to the midfield, he deployed the double pivot with Fernandez and Jonathan de Guzmán which means only one attacking midfielder was selected for this game, namely Mijat Gaćinović. In the 3-4-1-2-formation, Luka Jović and Ante Rebić were on the front line.

As a consequence of the double pivot, Simon Falette was left out and Makoto Hasebe sliced back to the middle of the defence, Hinteregger on the left and Abraham on the right.

Whilst Kovač deployed the usual 4-2-3-1 formation. Also, there were not any surprises in the team selection. In the centre of the defence usually, Süle is employed alongside Hummels or Boateng. This time, Boateng did not get the chance to start in his last Bundesliga game as Kovač chose Hummels. In the full-back positions were the pair of Kimmich and Alaba. In the double pivot, Thiago Alcântara got the right side and Goretzka played on the left. Well, until he got injured and Renato Sanches replaced him. Sanches featured on the right side whilst Thiago switched to the left. In the attacking department, Bayern lined up with the usual four: Coman, Serge Gnabry on the wings, Müller in the centre with a lot of freedom and Lewandowski up front.

Eintracht Frankfurt started with a clear idea to prevent Bayern’s progression. In order to achieve this, they used the usual man-oriented manner during the pressing phase. Thiago got tightly marked by Gaćinović, whilst Jović and Rebić firstly acted as zonal defence thus protected the space and the passing lanes to the central area. They then moved out diagonally to press the respective centre-backs. Also, the wing-backs were positioned high so they could attack Bayern’s full-back.

Frankfurt even pressed in really high areas. In these sequences, the aim was to force the opponent to one side and trap them there. In this instance below, the left striker presses the goalkeeper to force to the right wing while blocking the route to Süle. The right striker presses Hummels. 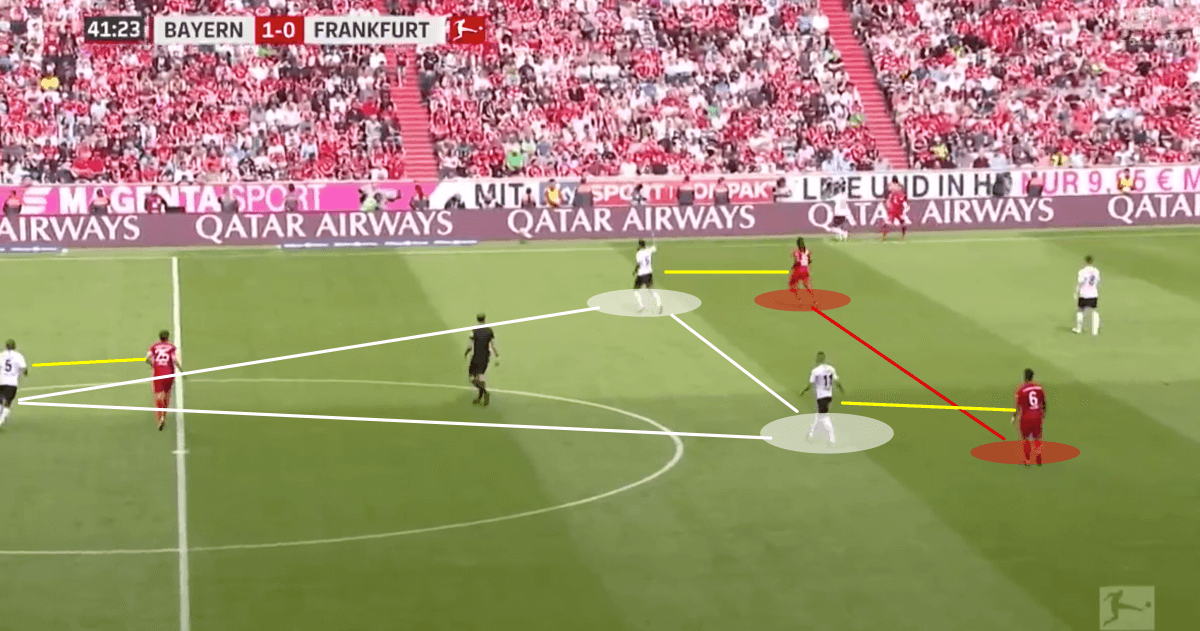 Volleys to counter the opponent’s pressing

Frankfurt’s setup was successful as Bayern could not progress up the pitch by the usual way, but Kovac’s side prepared for this and right after the failed attempt to progress on the ground they started to use volleys to play the ball to the opponent’s half. With this, they could force the opponent deeper.

The basic idea behind the long air balls to Frankfurt’s half was to create duels in there and win it as Lewandowski did on the occasion above. This would allow them to initiate a counter-attack. This was evident in Bayern’s play. Their goal was to create a high tempo game in Frankfurt’s half, especially in the final third to counter the unorganised defence.

Furthermore, Bayern often tried to surprise Frankfurt thus they played very directly like in the situation below. Bayern played the ball back, therefore in reaction to that Frankfurt’s players moved a bit higher to press the back pass. Then Bayern took advantage of this momentum and passed immediately back to the high area where Bayern’s wingers and Lewandowski stayed. With this, they could create an advantageous situation against Hinteregger. They used quick one-twos to played the ball to the open space and create a scoring chance which was an effective and successful way to do it as they grabbed the lead.

Moreover, Bayern often aimed to create a situation where the attacking players were left with the opponent’s back three. This means Kovač’s plan was to pass the ball in behind Frankfurt’s wing-backs to create opportunities for Bayern’s speedy and skilful wingers.

When Bayern did not do that and tried to break Frankfurt’s defence they struggled as the guests were able to remain compact around the ball. Thus Bayern faced difficult circumstances to create chances.

Hütter made a change for the second half, he introduced Sébastien Haller to the game, which means Rebić dropped back to the midfield as a #8 alongside Gaćinović. Haller moved next to Jović and Fernandez occupied a bit deeper as a holding midfielder.

Despite the more offensive setup, Frankfurt still struggled but they managed to equalise from a corner with a lucky goal.

Bayern Munich did not want to lose the title race thus immediately switched to attack and it took only three minutes to grab the lead again. Before the 60th minute, Bayern decided the game as they scored again. After that point, Kovač sent Ribéry and later Robben into the game. This turned the clash into a gala as both of them tried to do some magic one last time in the Allianz Arena.

The game showed a much bigger difference between the two sides. Kovač found a really good and effective way to neutralise Frankfurt’s defensive power and exploit their defence. With this strategy, Bayern were able to create lots of chances and were a constant danger to the opponent’s goal despite the lack of ground build-up.

Furthermore, Bayern Munich did not make a mistake and grabbed the title for the 29th time. Although this time has a special flavour since this was the last game in the Bundesliga for Arjen Robben, Franck Ribéry and Jérôme Boateng as they will leave the club.

On the other side, Eintracht Frankfurt with this defeat only finished in the 7th place.