Despite a sixth-place finish last season, Wolfsburg and Bruno Labbadia decided, with four games to play, that come the summer they would part ways. The German side moved swiftly to announce that 44-year-old Austrian coach Oliver Glasner would be next in the hot seat.

Perhaps an unfamiliar name to many, Glasner has been quietly building a reputation in his own nation, bring LASK Linz up from the second division to be title contenders in the Austrian Bundesliga. This tactical analysis will delve into Glasner’s philosophy at LASK Linz, and give an analysis of its progress so far with Wolfsburg, and what sort of football Die Wölfe can expect to see in the new season.

Glasner took over LASK Linz in 2015/16 and took them to a second-place finish in the Austrian second division. The following year they went one better and comfortably won the league by a 17 point margin. In 2017/18 season a fourth-placed finish in the Austrian Bundesliga followed and clubs around Europe begun to notice what Glasner was doing at Linz.

However, it was last season where the team’s performance really caught the eye. They finished in second place in the Austrian Bundesliga. Admittedly this was 12 points behind first-placed Red Bull Salzburg, but nine points ahead of third-placed Wolfsberger.

Their xG last season would suggest they overperformed, scoring 2.12 goals per game with an xG of 1.57. However, upon further scrutiny, there were several games throughout the season where they scored far higher than their xG. These included a 6-0 win over St Pölten and an 8-0 win over Stadl-Paura. The xG was perhaps misleading, and Glasner’s side fully deserved to finish where they did in the league table.

The mixture of excellent results with eye-catching, efficient passing football was enough to convince Wolfsburg to give him the job.

The biggest change Wolfsburg fans will see this year is the formation.

3-4-3 is Glasner’s preferred formation and was used, in some variation, 93% of the time last season. Glasner only started using the 3-4-3 once Linz were promoted to the Austrian Bundesliga, and has experience with playing four at the back. However, Wolfsburg have nevertheless played three at the back in every pre-season game thus far.

With this particular formation, the wing-backs naturally have to be combative, energetic, and incredibly disciplined. These are adjectives that are often attributed to right wing-back Kevin Mbabu, who Glasner brought in from BSC Young Boys this summer.

Glasner has played seven different players in the left wing-back position so far for Wolfsburg. However, it appears if he wants his team to play with a more reserved approach then Jérôme Roussillon will be given the nod. Whereas, with a more attacking intent, Paulo Otávio will be played here. Glasner believes Mbabu can attack as well as he can defend, and will likely be an ever-present in the side this year.

It’s hard to predict what players will be in the starting XI come the first day of the season, but the formation is for certain. The line-up may well look something like this.

Glasner likes his side to press with intensity and win the ball back as quickly as possible. This was a key component of his Linz side, and he will no doubt be instilling his own pressing ideals onto his new players.

The front three of Linz worked as the first shield. Last season Linz won the ball back 13.74 times per game in high areas.

However, they weren’t a side that pressed constantly. Glasner is very tactical with his side’s pressing triggers, and these will often vary from game to game. Glasner will sometimes choose a specific defender, deemed weak on the ball, as a trigger for his front three, other times it may be a back-pass but more often than not the trigger for pressing is based on the location of the ball.

The defensive shape of Glasner’s sides often changes as the opposition progress with the ball further up the pitch.

They will initially hold their 3-4-3 shape when the opposition defenders are in possession. 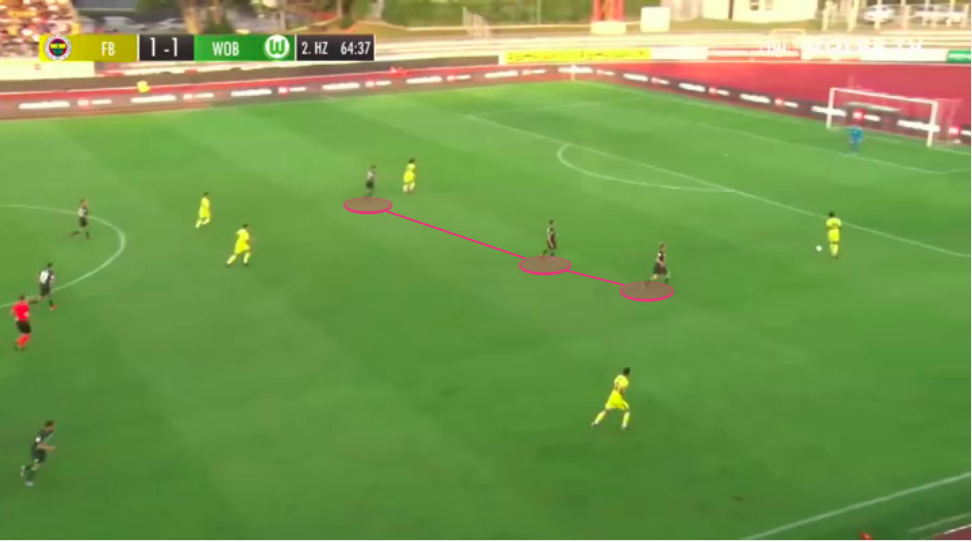 Above we can see the front-three are creating a narrow shield. They are not pressing heavily but enough that the centre-back in possession knows they need to make their pass quickly. If the ball is played centrally the positioning of the forwards means they will likely recover it. The high positioning of Glasner’s wing-backs means that a wide pass is also a dangerous option. Glasner wants to force the opposition into playing a long ball, which his three centre-backs can deal with comfortably.

However, this is theoretical and will not work every time. It is as the opposition works the ball higher that Glasner’s defensive tactics become particularly interesting. 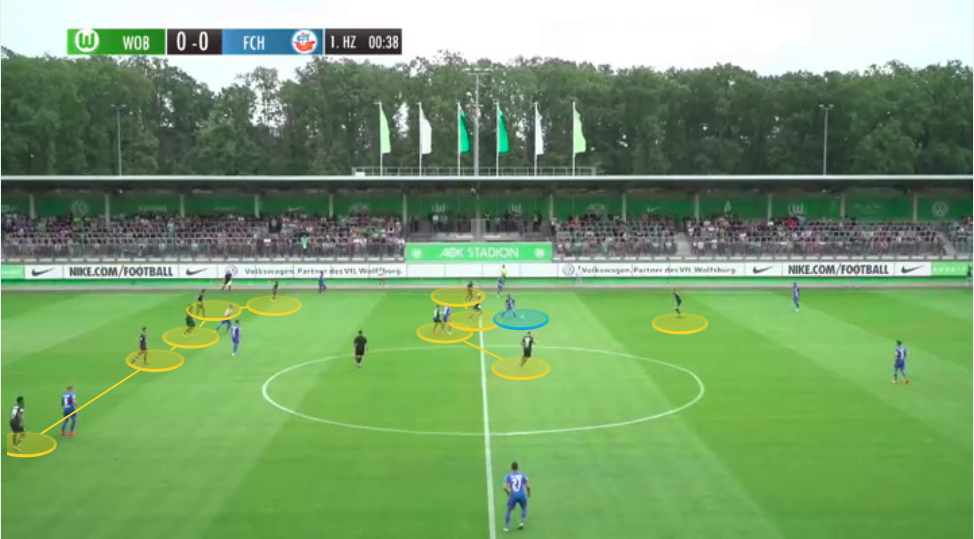 We can see the player highlighted in the blue has the ball in the middle of the pitch. This is a higher position than before and defensively we can see that Wolfsburg have changed from a 3-4-3 to a 5-4-1. The wing-backs have dropped deeper, and the two wide-forwards have dropped into the midfield to support the two centre-midfielders.

We are able to see just how narrow Glasner wants his defence to be in order to stop the ball being played through the lines.

The intensity of pressing increases significantly when the ball has reached the opposing midfield players too. Last season, 57.7% of balls won by Linz occurred in the middle of the pitch or higher.

When an opposition centre-midfielder attempts to break the lines by carrying the ball, Glasner uses his numerical advantage defensively to press from all angles. Not only do at least two midfielders follow the player, but one of the three centre-backs is used to engage the midfielder higher than what would be expected. Linz used this tactic to great effect to create counter-attacking opportunities. The remaining four defenders squeeze together to create a traditional back four and if the trio of players pressing the opposing player are successful, they are able to quickly spring a counter-attack.

Playing three at the back is often a tough concept for clubs to change to, particularly for clubs like Wolfsburg who haven’t played this with any consistency for the last few seasons. We can expect a period of time for this formation to bed in, and fans and the board will have to show patience with their new man. However, although pre-season friendly results are not something to pay much heed to, Wolfsburg are yet to suffer a defeat under Glasner.

Nevertheless, playing three at the back does leave a team susceptible to a counter-attack. Teams may be happy to leave three players up against Wolfsburg, knowing they can create a three-on-three situation. The fast break has been an issue on several occasions in pre-season, and they will perhaps need to be more cautious when playing the top sides in the Bundesliga.

Glasner wants his sides to get the ball forward quickly. His wing-backs are given license to roam the flanks, and with the front three able to occupy the opposition back four, they are an excellent option to get the ball behind the defence, whether through dribbling, or a pass.

One way Glasner created this opportunity at Linz was by getting the ball into centre-forward, João Klauss, quickly. The centre-backs would look for this opportunity as soon as they received the ball. The two centre-midfielders facilitated this by moving wide and created the space for Klauss to receive.

As soon as the ball reached the forward he was able to play the ball out wide instantly, knowing the wing-backs would be in a high position. As he came deep, the two wide-forwards were able to run into the space behind him and look for a through ball from the wing-back.

Of course the pass into the forward’s feet isn’t always possible, however, the high wing-backs are able to play in between the lines and use this space to start an attack from. This is due to the angle from which they are able to pass, and it provides two options for the forwards. 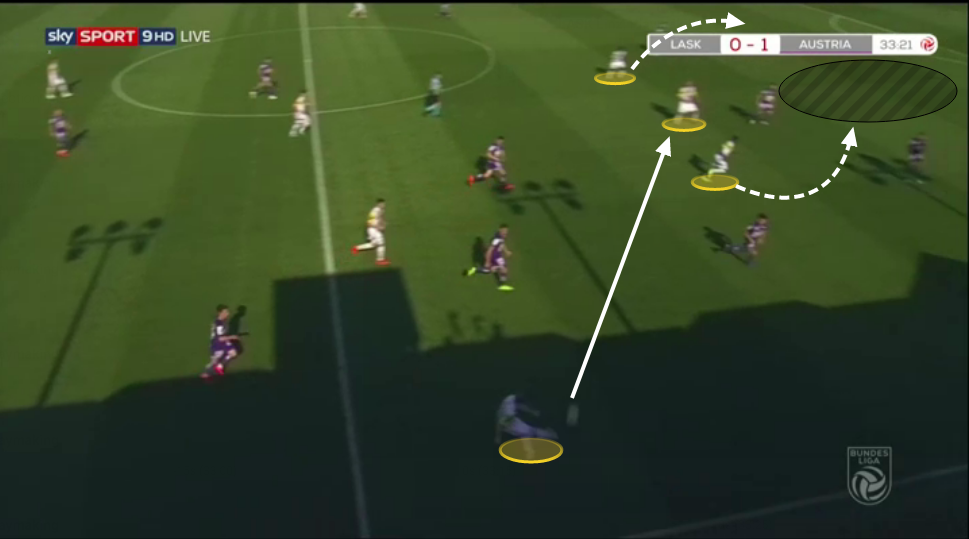 Above we can see that Klauss has moved off of the centre-back to receive the pass from the wing-back. By doing so he has left space behind for a forward to run into. He can play a quick interchange with one of the wide-forwards, or hold the ball up and await larger numbers.

Felix Klaus, traditionally a midfielder, has seen playing time as the focal point of the front three as a false nine in pre-season for Wolfsburg. This movement, in particular, is something Glasner wants to see from Klaus. 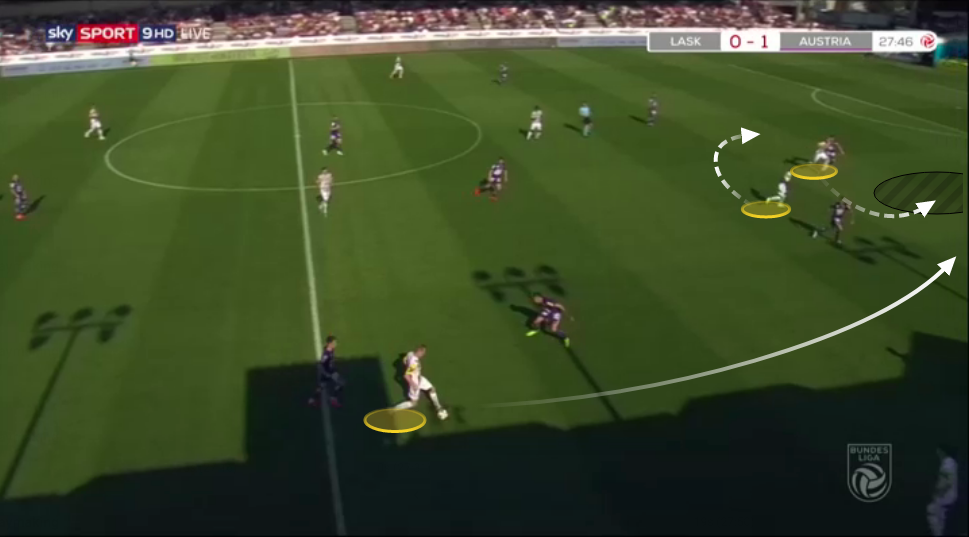 However, in the above image, we see the wing-back in a near-identical position with the ball. This time João Klauss hasn’t shown and the wing-back knows to play the ball behind the opposing left-back. By taking the centre-back with him, Klauss is leaving space for the wide-forward to make a run into.

Therefore the centre-forward’s movement will be key for how Wolfsburg attack from the wing-back position. Wolfsburg happen to have an excellent centre-forward in Wout Weghorst. The Dutch striker is similar in style to Linz forward João Klauss and should take to Glasner’s attacking style perfectly.

Oliver Glasner has been touted as a coach to watch for some time. He will get his opportunity in the spotlight with Wolfsburg. His attractive and adventurous brand of football should get the fans behind him. This is provided the players adapt successfully to the new formation. The results from pre-season suggest that they will, and Die Wölfe fans will be hoping the club can build on last season’s sixth-place finish.