After the victory at the El Tráfico derby, LA Galaxy suffered a huge defeat (4-0) against Portland Timbers. Despite the slightly shocking result in this MLS game, Galaxy had this inconsistency in their performance. According to the previous six MLS games, they fluctuated between a win and lose. Meanwhile, Portland Timbers have been showing really strong performances lately as they extended their unbeaten streak to six games now with this victory.

In their match against LA Galaxy, Portland’s tactics showed they posed a lot of danger via counter-attacks. They were also good at winning the ball back with the instant press after losing it. Although having said that, the game did not look a great victory for them until they scored two quick goals in the later stage of the first half. As for Galaxy, we saw them struggle to break down the opposition defence and create chances. This tactical analysis will investigate how Portland Timbers managed to beat Los Angeles Galaxy with fair ease. 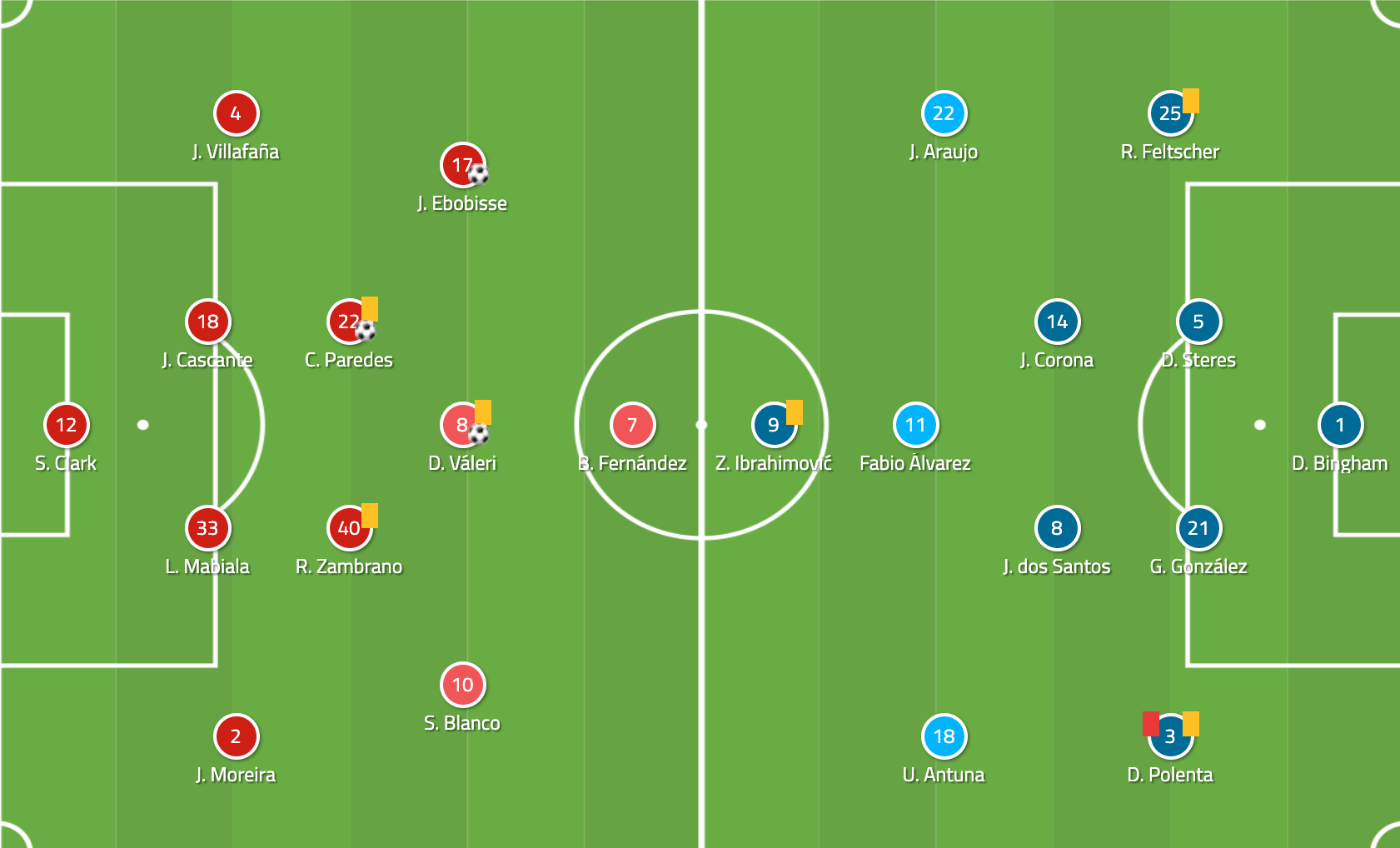 Home side head coach Giovanni Savarese deployed the usual 4-2-3-1 formation with some changes in the team selection. Jorge Moreira returned to the left-back position after missing the last game against NYCFC. Same goes for Julio Cascante and Jorge Villafaña who replaced Claude Dielna and Marco Farfan. Cristhian Paredes also took back his midfield position to form a double pivot with Renzo Zambrano. Lastly, in the attacking department, Blanco moved to the right-wing and thus Jeremy Ebobisse could take over the left side.

On the other hand, Guillermo Barros Schelotto also selected a 4-2-3-1 formation for the guests and used the same starting XI as he did against LAFC.

In this game, we saw several times when the home side built out from the back. Often through the full-backs, although Moreira and Villafaña sometimes occupied higher early on. On these occasions, the centre-backs drove forward on the ball to reduce the distance or relatively often, the right-winger, Sebastián Blanco dropped deep to offer a passing option and move the ball forward.

Portland were able to act without pressure in the early build-up phase thus the first passes were clean. However, as soon as they tried to pass to the midfield, Galaxy moved out to press. Here, Steve Clark passed to the right centre-back, then Larrys Mabiala played the ball to Zambrano who was immediately closed down by the opponent.

Against the ball, Galaxy formed a 4-4-1-1 shape where Zlatan Ibrahimović did not contribute much defensively and Fabio Álvarez marked the deepest midfielder. Usually, Zambrano stayed deep and Paredes pushed forward to the right half-space. While Diego Valeri occupied in the left but both of them were in behind the opposition midfield line. Therefore, the line had to be narrow to reduce the possibility for vertical balls towards the aforementioned players. As the image below shows, it allowed more space for Portland on the wings.

Perhaps due to the easy progression, Galaxy became more aggressive later on. Thus they pressed high up in a man-oriented fashion, which made much it more difficult to bypass. In the situation below, for example, everyone got a tight mark from the away team, therefore Clark had a hard time to find a passing option, especially compared to in the fourth minute (first image).

As the build-up phase showed, Portland progressed up the pitch fairly easily. Thus now, we need to see how the Timbers attacked. They usually targeted the wide areas to break down the opposition defence there. The aim was to create a crossing opportunity in order to play the ball to the box where multiple targets await the ball.

Furthermore, there was an interesting tool that Timbers used when the guests fell back to their deep defensive block. Galaxy tended to form the lines close to each other, to limit the space between the lines. This allowed Portland to utilise the space in front of Galaxy’s second line. Thus with a dropping player, they could offer an instant route to switch to the far side and attack the space there.

One of the recurring trends of this match was the fact that both teams used wing-oriented attacking play. However, Galaxy did not pack the penalty box with several targets, rather relied on Ibrahimović to score. In the base 4-2-3-1 formation, the wingers, Julian Araujo and Uriel Antuna stayed wide and high to stretch the opposition shape or always have passing options.

Galaxy showed one of the patterns in their attacking play early on. In the opening minute, they immediately passed behind the Timbers defensive shape, targeting the left-wing and half-space where Antuna ran in.

As this image highlights, both wingers stayed wide but Antuna had big space ahead of him thus a volley towards him offered a quick way to progress to the final third and a possibility for crossing the ball to the box.

Moreover, there was an asymmetry in their wing play. They tended to overload the right-wing, Ibrahimović also slightly occupied to right rather than in the centre. This, of course, created space for them on the far side as the opposition shape shifted to the ball side. Thus a quick switch to the far side allowed Antuna to attack the space in there.

Antuna usually, tried to run in-depth to receive a pass in behind the opposition shape or relatively frequently attempted to cut inside. As this situation shows below, he cut inside after a switch of play which allowed him to find the teammate (Alvarez) with a pass in zone 14. With good, excelled quick one-twos, they would able to create a huge scoring opportunity.

However, most of the time, they could not access the central zones. As opposed to Portland, who used high full-backs – thus the wingers could occupy narrower – which gave them enough presence in the middle. Galaxy did not have enough players in the middle and more importantly, they were not able to break the opposition 4-4-1-1 defensive shape.

They were restricted to the wings and Ibrahimović rarely had a scoring opportunity. This is a recurring issue for them as they rely too much on Ibrahimović and his scoring ability. The Swede star has already scored 16 goals whilst the second one – Daniel Steres – only three. Therefore, they do not have many other weapons or methods to score.

As this analysis showed, the home side had more effective possession play than the guests who struggled to create chances, although both created around the same expected goals ratio (Galaxy 1.78 xG, Portland 1.92 xG). However, this shows us the effectiveness of the Portland players and how impressive their performance was.

Truth be told, Portland Timbers need to collect those points diligently since there is a big battle in the mid-table of the MLS between Minnesota United, FC Dallas, Real Salt Lake, Houston Dynamo and them (only five points between the highest team and the lowest). However, if they continue on this strong run, they will definitely be a tough opponent in the MLS playoffs.

Meanwhile, Guillermo Barros Schelotto has a difficult task, namely to shepherd his team to the path where they can produce a more consistent performance. Los Angeles Galaxy has already dropped to the third position at MLS Western Conference thanks to this loss and Seattle Sounders’ win.