After a disappointing previous campaign which saw Manuel Baum leave the club in early April, FC Augsburg will be looking for a better campaign this year under Martin Schmidt. Schmidt’s early games were a mixed bag, with them picking up two wins including a vital one over then relegation rivals Stuttgart, one draw and three somewhat embarrassing losses. In this tactical analysis, I’ll use analysis to look at Augsburg’s games under Schmidt and identify what problems have arisen from Schmidt’s tactics and also look at how they might look in the Bundesliga next season.

A common problem for Schmidt’s side has been their inability to defend from set-pieces. This inability to defend the set pieces is seen in the first and second phase of defending the set-piece, and so it may well be a problem in their structure which is hindering them.

Augsburg use a man-marking approach from corners, with each player matched up against another. In recent times this approach is becoming increasingly outdated, and when we look at Augsburg’s struggles it is easy to see why.

Below we can see Augsburg’s man-marking structure from the set-piece. Every player marks an opposition player tightly, while two players cover the front post area. The main disadvantage to man-marking is how easy it can be for the opposition to either outmuscle their markers or for markers defensive runs to be blocked off. Either of these options results in a free man, and if the delivery is good, often a goal. Augsburg’s man-marking leaves space as highlighted, and so in this example Marko Grujić outmuscles his marker and makes a run into that space highlighted, where he scores a free header.

We can see another example of this in their game against Wolfsburg. Just from ground level, we can see spaces both behind this line of players and a large space between this line and the next line. Robin Knoche makes his run into the space between each line but is followed. 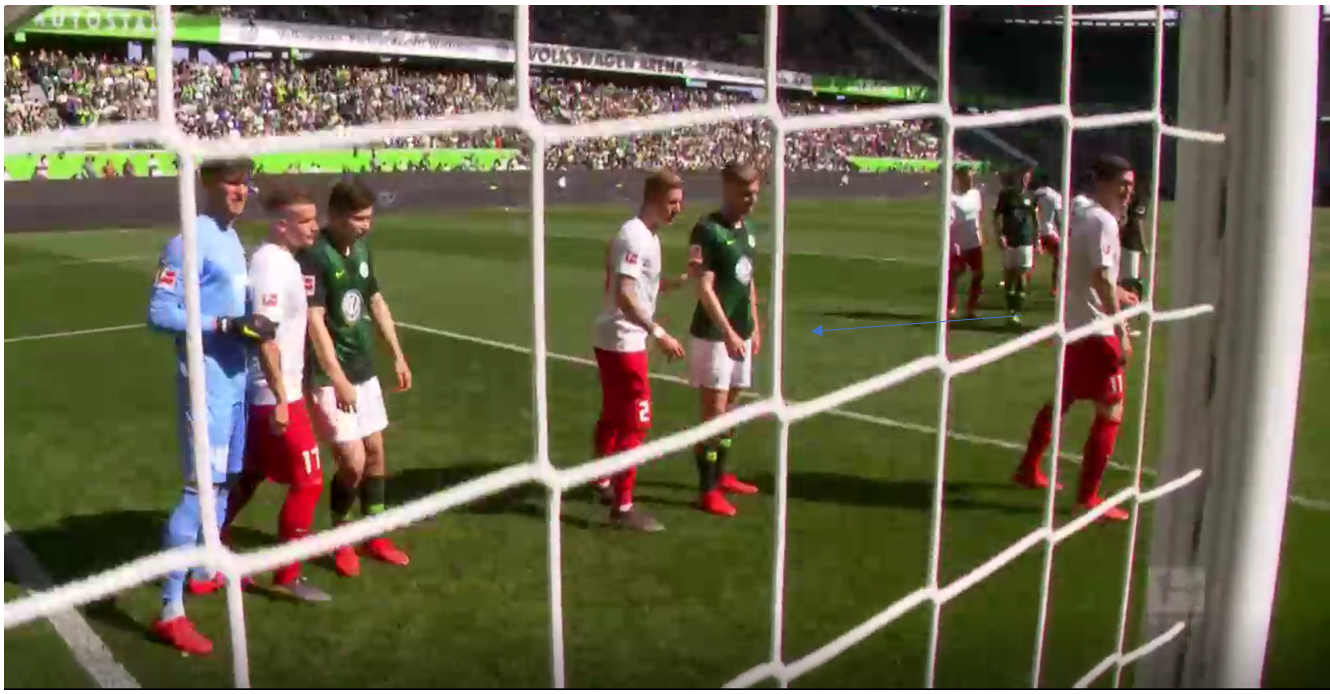 But because this system purely relies on a player’s ability to recognise a run and win the header, and because there is no cover like there is in zonal marking, Knoche makes his run and just outmuscles the opponent to win a header on the edge of the six-yard box. A zonal marking structure aims to limit the size of these areas between each line, whereas in a man-marking structure the opposition can create this space by moving out and then in, while others as seen in the pictures above pin the first line of defenders into place. 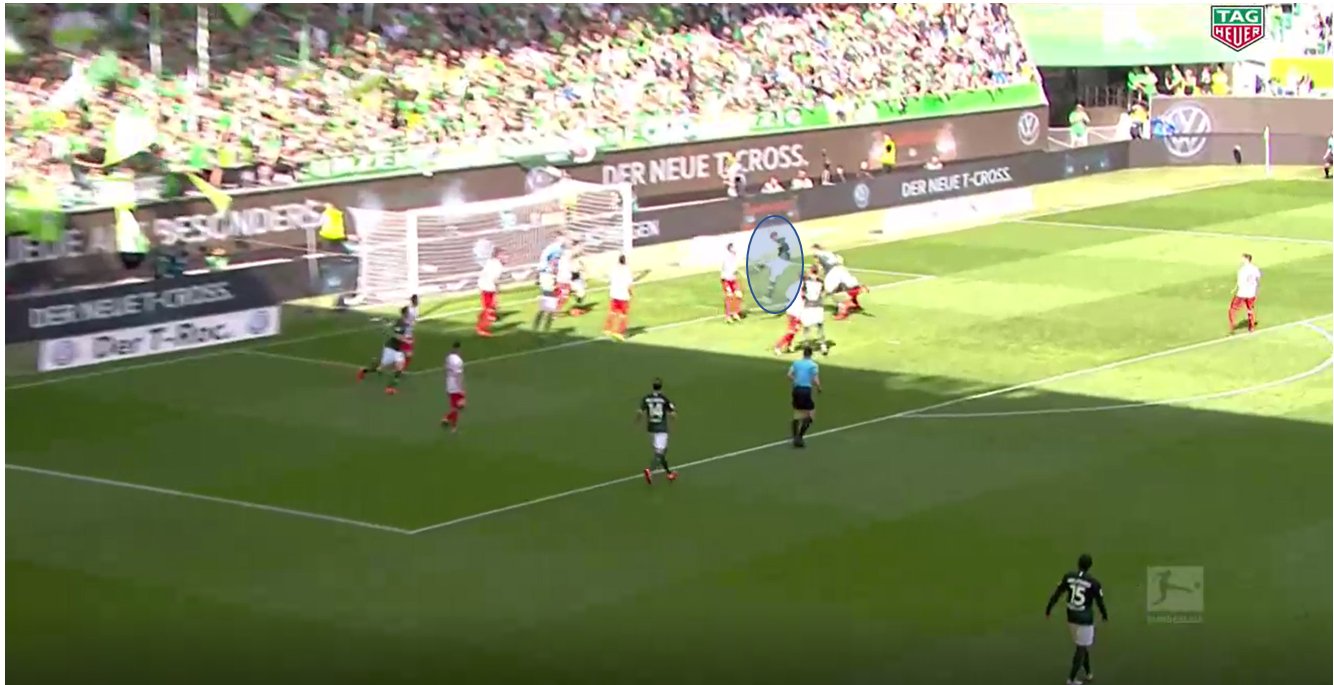 If Augsburg managed to win the individual battles in their own area from set-pieces, the second phase of the corner often resulted in them conceding a goal too.

We can see their structure again in this corner against Hertha, with most players man-marking and two players covering the front post area. Augsburg manage to stay with their men here and clear the ball out to the edge of the box.

Between their first clearance and Lazaro’s delivery into the box, Augsburg get four seconds to prepare their shape. Some players move out (but not far enough I don’t feel), while the players highlighted make the fatal mistake of dropping too early and playing everyone onside. Four seconds may not seem like much time but in terms of running from the six-yard box to the edge of the box, it’s entirely achievable. Players trained properly will start to creep up slowly if the ball looks as though it is getting cleared, and this, therefore, gives them less distance to cover. The red line highlighted on the image is where I’d like to see Augsburg’s defensive line. This would be a brave strategy, but it’s extremely effective because quite simply the defending side can move forward and out quicker than the opposing team can move backwards and reset their run. Therefore, by the time the delivery comes in, Hertha’s players should be offside.

This image below better highlights the damage the dropping defender does by not pushing out, as explained above.

Augsburg’s style of play on the ball relies mainly on their target men upfront and their ability to bring down long passes and to win aerial duels from crosses. Their build-up play under Schmidt has not exactly been inventive so far and often their offensive movement lets them down, as it does in this case below.

Gregor Kobel plays the ball short to the centre backs who are then pressed by Leverkusen while Augsburg’s full-backs are also man-marked. Upon seeing this, the central midfielder doesn’t make a run between the two pressing players to receive the ball and instead stays in his position. Even if the aim of this phase of play was to attract a press from Leverkusen, if the midfielder had made this run slightly more towards this player highlighted, he would likely have been followed by one of Leverkusen’s midfielders leaving more space for the Augsburg player behind him.

Furthermore, the goalkeeper is not used at all again by the central defender, and so the defender just kicks the ball long and Augsburg immediately lose the ball and concede a goal.

We can see some more strange offensive movement below, where Augsburg drive forward but as they do one of their midfielders retreats back to sit in front of the defence. In the position he is in, he could be a central option for the wide player or even make a run behind the defence but oddly chooses to go back.

By doing this, Augsburg’s options become limited and they decide to take the easy option of sending a very early cross into the box, where the defensive line is too high for Augsburg to cause any real problems unless they bring the ball down. A simple third man pass would have allowed Max a better position to deliver this cross, but perhaps their lack of confidence simply forced them into a familiar and easy habit.

In this final example below, two Augsburg players invade each other’s spaces and restrict their own space on the wing, while there is a large central space unoccupied. With both wide players in such little space, the central defender again plays the easy option of a long ball up to the strikers, which is unsuccessful. The two wide players create that central space, but nobody utilises it.

They are certainly capable of these offensive movements at times, as we can see below in their game against Frankfurt, where a central midfielder drops to complete a diamond and receive the ball between two players and starts an attack, which results in a goal. Schmidt simply needs to maximise this situation by improving the confidence of his players and demanding more than a hit and hope pass up the field. Augsburg have quality players who can combine in the ways I’ve illustrated, but they have to trust them and take risks.

The xG goal totals of Schmidt’s side don’t make for happy reading either for Augsburg fans. In these five games, Schmidt’s side scored 13 goals but only managed an xG of 6.11, suggesting the quality of their chances isn’t high and that Augsburg’s goals have come rather from finishing ability than excellent chance creation. This reinforces how poor there offensive movement has been, and I would suspect when Augsburg can no longer rely on unlikely goals from poor quality chances, they will really struggle to score goals. 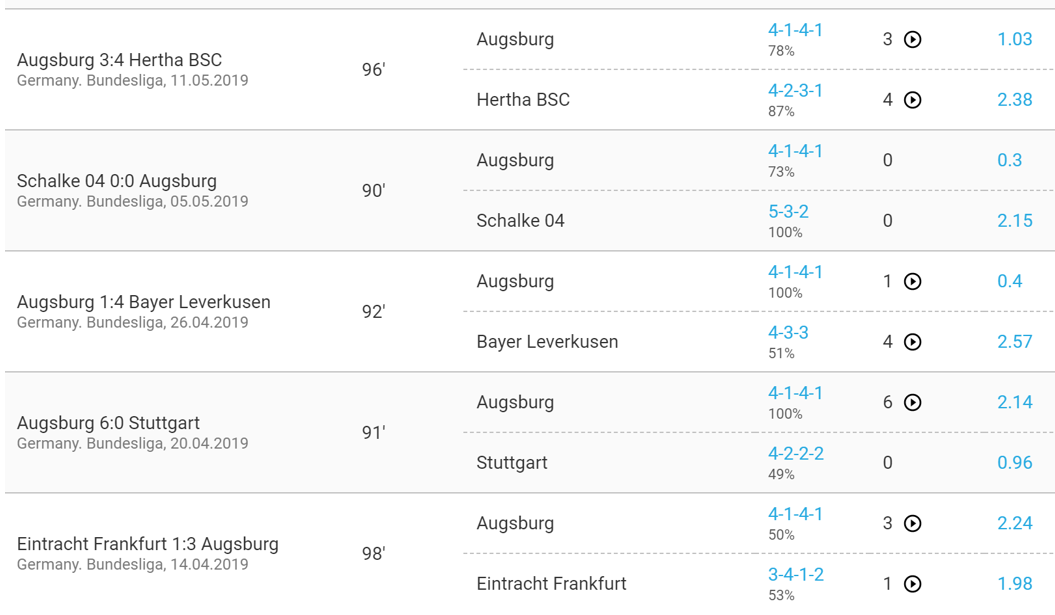 Augsburg are one of the favourites to go down this year in the Bundesliga, and through reading this scout report, it is easy to see why people may make that judgement. Schmidt’s side need to use the quality they have in the likes of Alfreð Finnbogason and Phillip Max to create better quality chances by being braver and more fluent on the ball, otherwise, I fear this Bundesliga season preview of Augsburg will not be repeated next year.