Niko Kovač is heading towards his second season at Bayern Munich. Having won the national double, the Croatian coach surely aims do bring Bayern back at the top of Europe and do better in the Champions League than last season. However, the Bavarian squad faced some changes, as two of Bundesliga’s all-time bests, Franck Ribéry and Arjen Robben, are not part of the team anymore.

In this scout report, we will provide a tactical analysis of how Bayern intend to play in the upcoming season and what their idea on how to move on after the loss of such important players could look like. The analysis will focus on the tactics from the first friendlies of the season

The evolution of Bayern’s build-up

Last season, Bayern faced a lot of problems in the build-up. Even though they still had the majority of the possession in their games, it seemed as if most of what Pep Guardiola had implemented in Munich has been forgotten. Many principles of the possession game, the Juego de posesión, were violated.

In the first friendly of this season against Arsenal in the International Champions Cup, it was no better than last season. The image below shows an example of five Bayern players occupying one horizontal line, which makes it difficult to progress the ball as there are no passing angles. Thus, Javi Martìnez has to dribble with the ball into the open space. 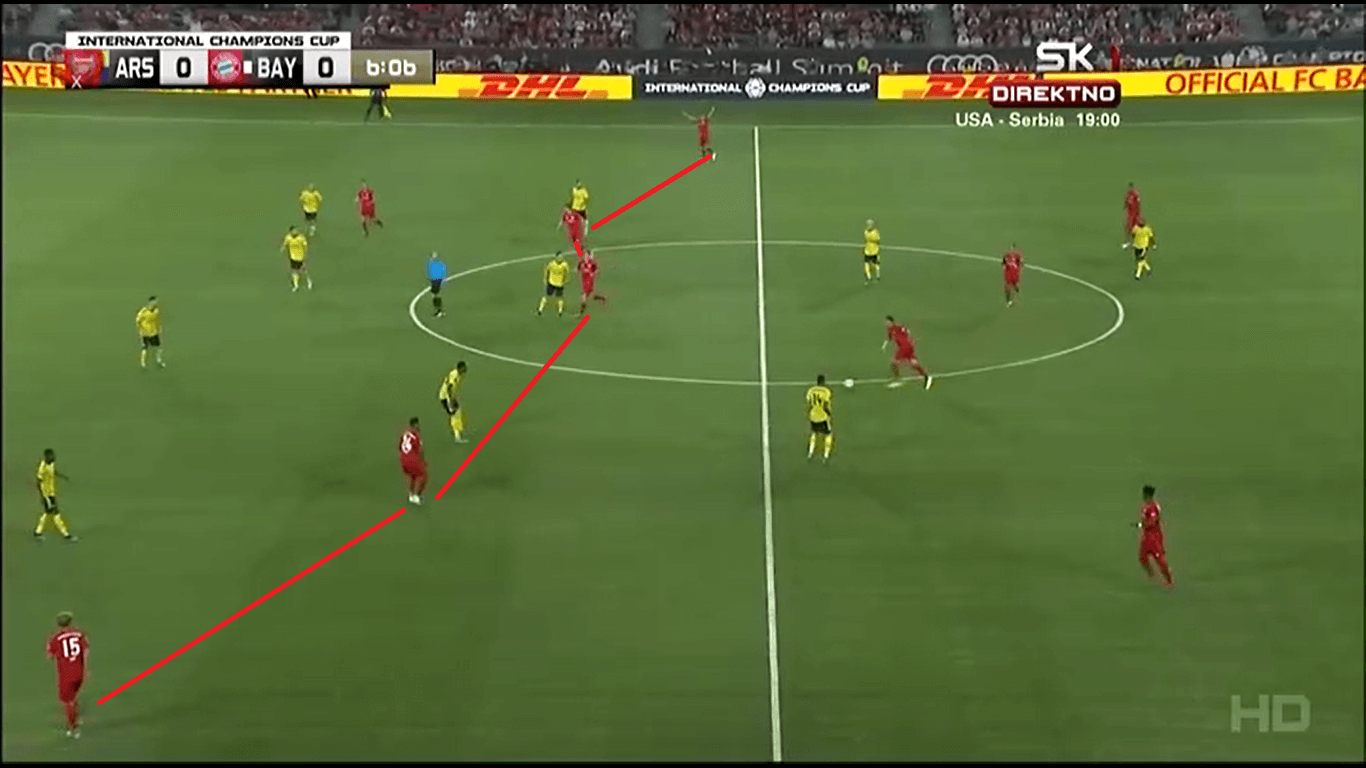 However, in the second friendly of that exact same tournament when Bayern faced Real Madrid, their build-up was insanely good. Bayern were able to open a lot of space and were brilliantly positioned. 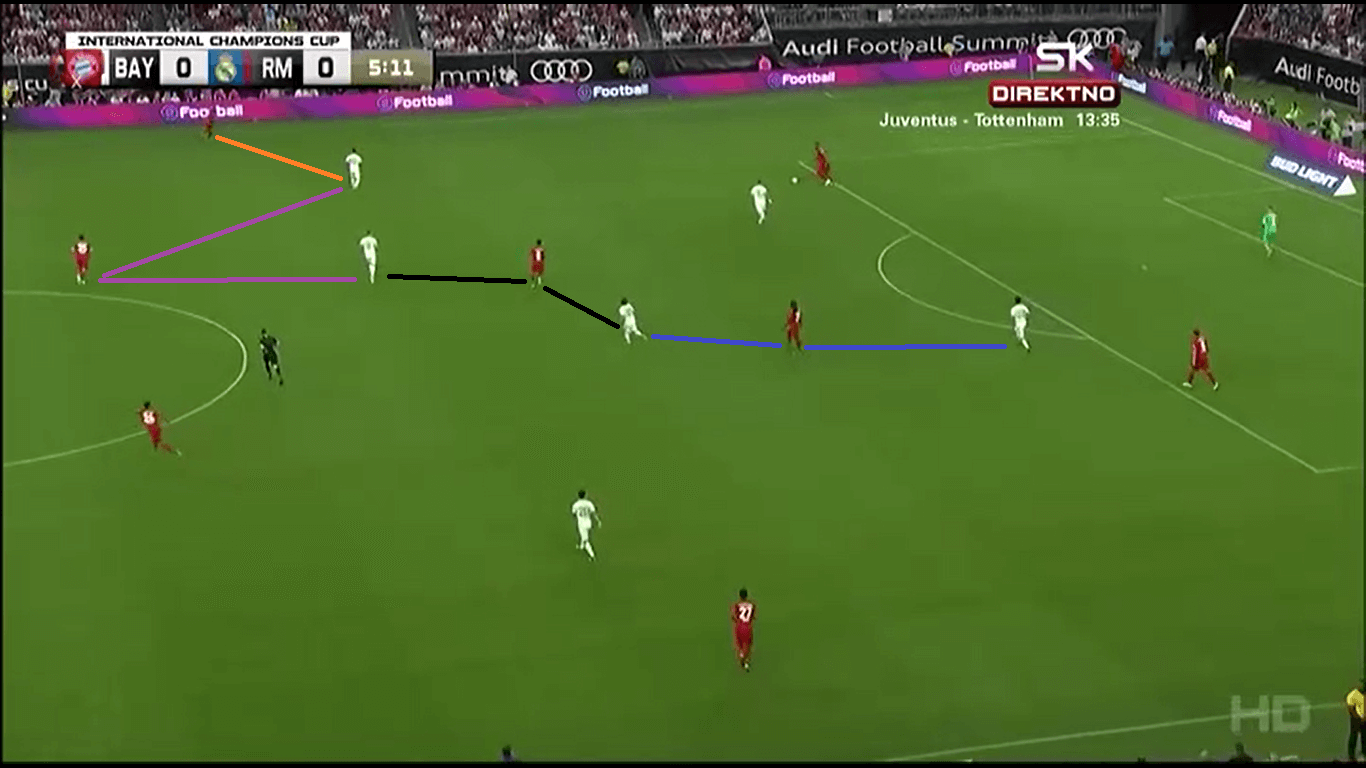 We can see from this image that the players take perfect positions. In the centre, Thiago and Renato Sanches are able to pin down three opponents by occupying the gap between two players. Thomas Müller does the same near the halfway line in the back of the opponent’s team. If we look at Real Madrid’s Toni Kroos now, it becomes obvious that this situation is extremely difficult to defend.

Kroos has to decide whether he should mark Thiago or whether he should close the passing lane to Müller. Obviously, he cannot do both, as they are more or less 15 meters apart. The same applies to Eden Hazard. If Kroos moves near Thiago, Hazard has to shift inside to close the passing lane to Müller. In that case, right-back Joshua Kimmich would be open.

It is such a dilemma, that you just cannot find a proper solution. Additionally, Corentin Tolisso making a forward-run just makes a lot of sense in this situation in order to gain presence up-front, since the build-up works without him as well. 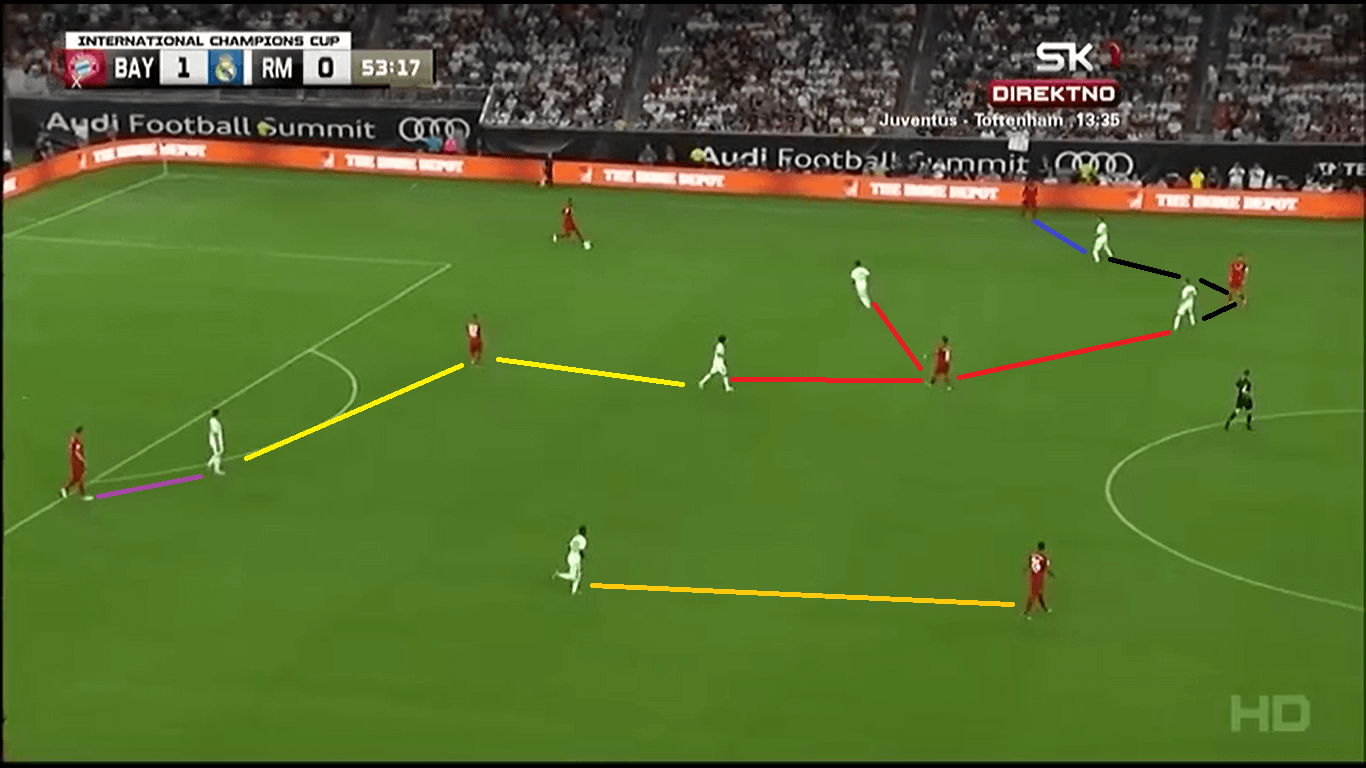 Even after making a lot of substitutions after the halftime break, we saw the same picture which clearly indicates that regardless of the personnel, Bayern are able to play a better possession game. Kimmich as an example moved from the right-back position into the defensive midfield, where he was also able to position himself perfectly, pinning two opponent in this image. Thiago even pins three opponents, which shows his great understanding of the game.

Thiago may be the most important player for Bayern

Besides his understanding of the game, Thiago’s extraordinary technical skills come in handy, as he can easily free himself from situations where he is under pressure. The two following images show an example of this. 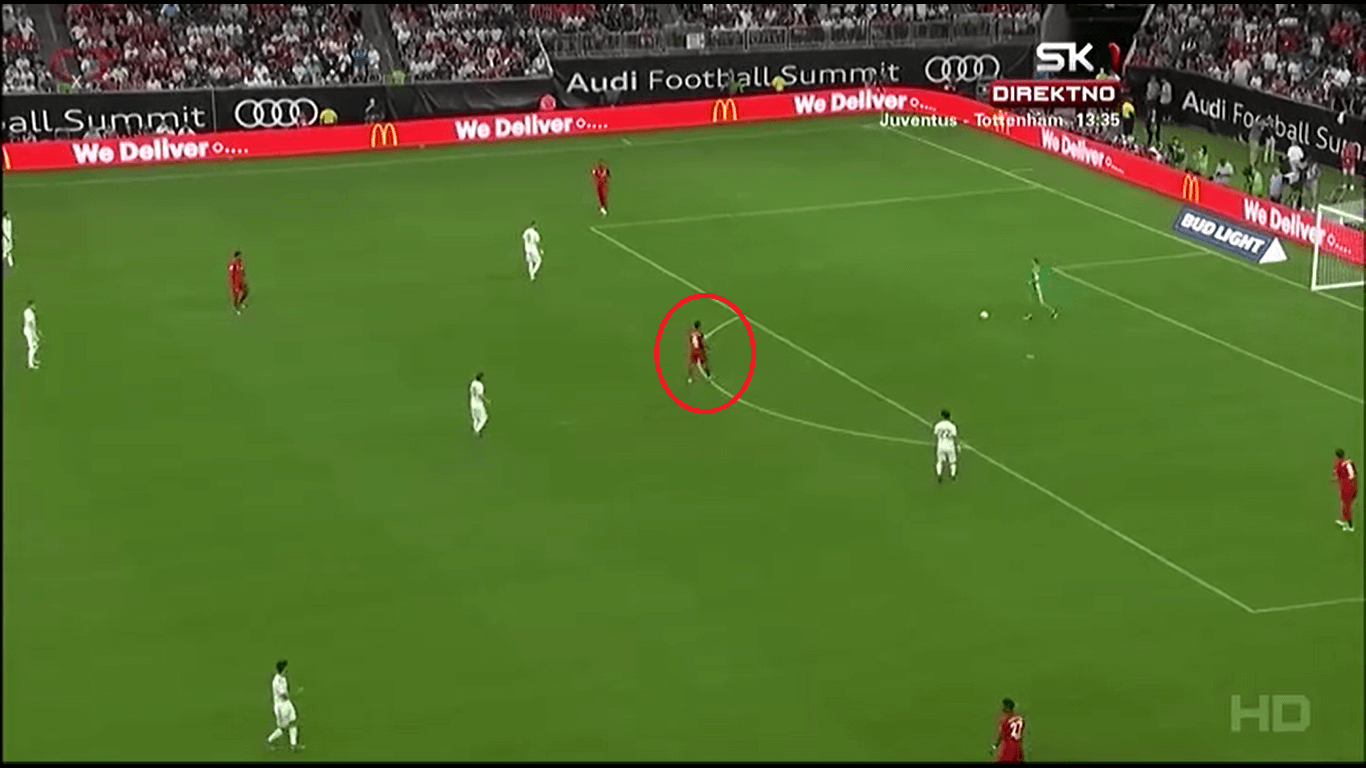 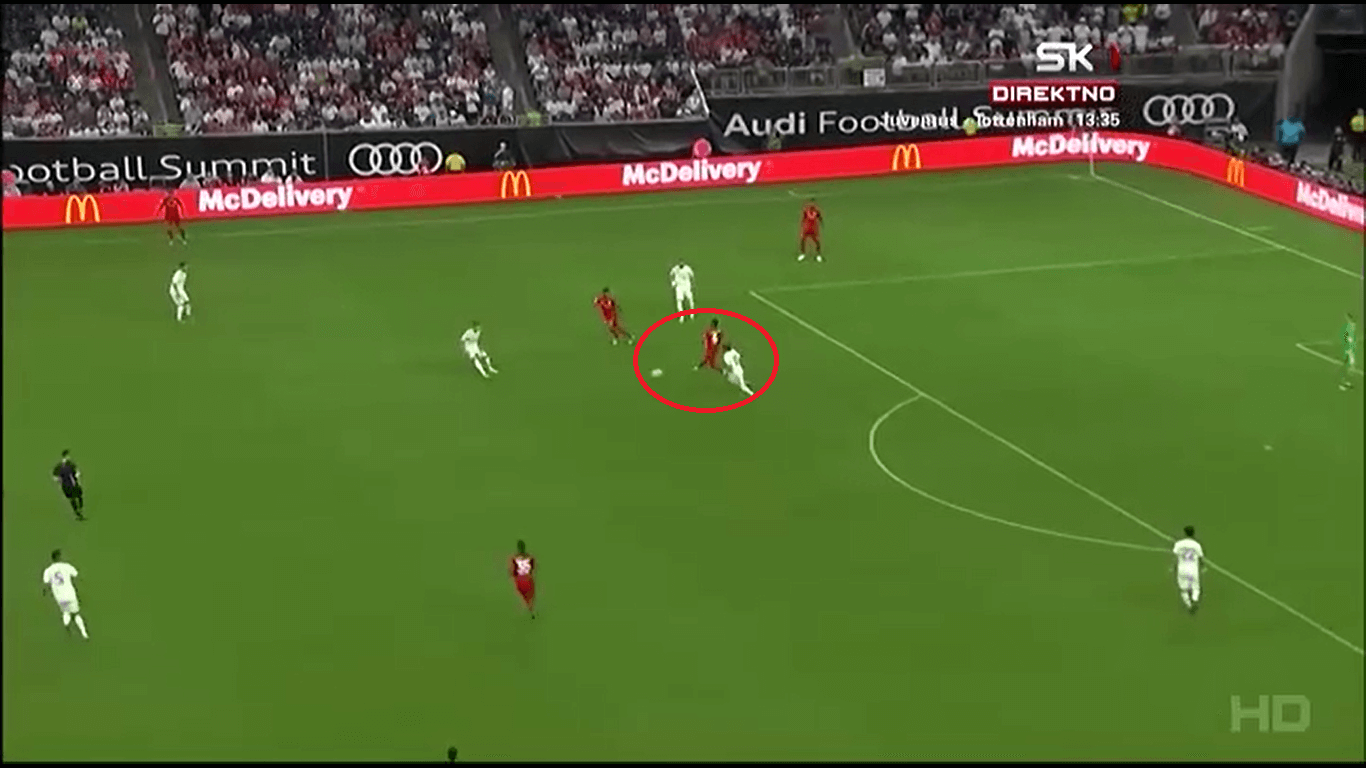 Here, Thiago receives the ball in a situation which is not easy to solve. Luka Modrić is all over him and harasses him. But the Spaniard is even able to play the ball with his backheel in such a difficult situation. As a result, Müller receives the ball near the halfway line. Bayern overload both wings, as we can see in the image below. 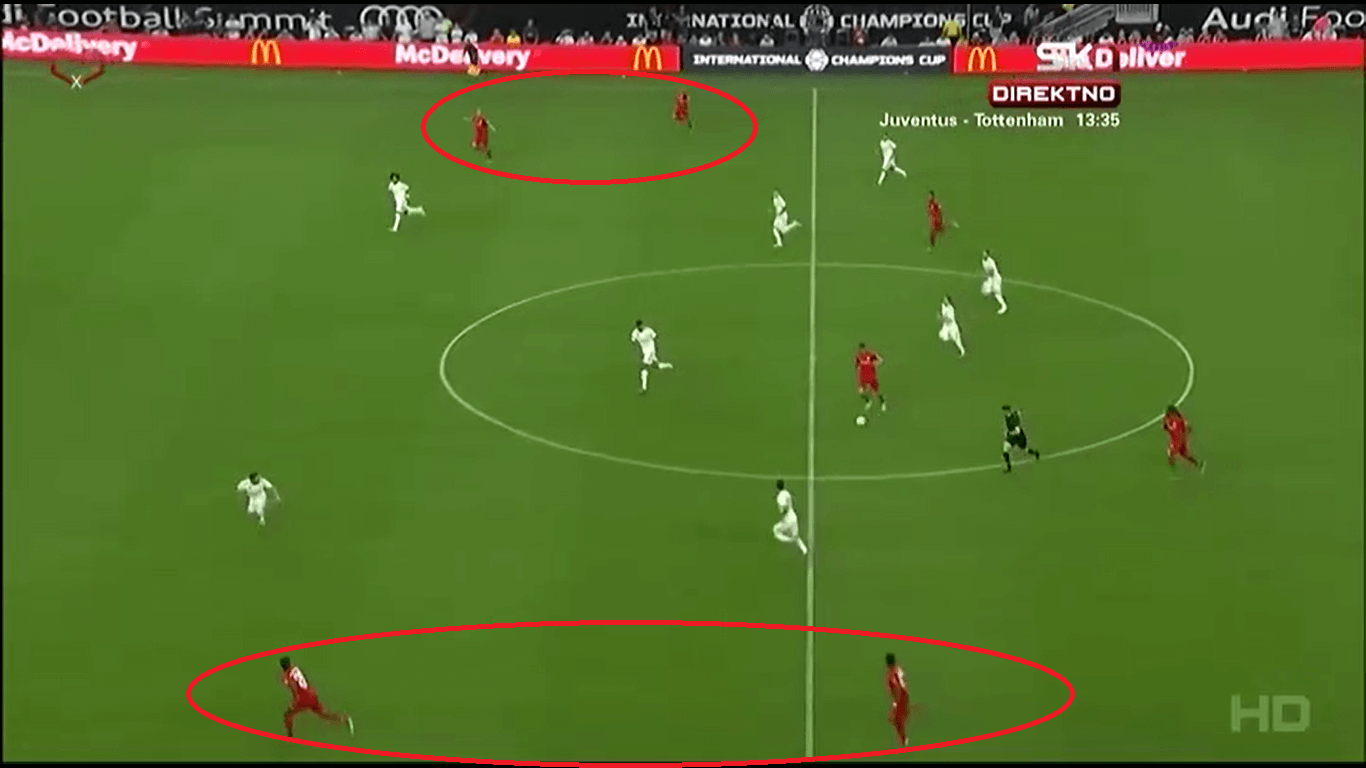 The question of where Thiago helps his team the most still remains unanswered, though. There are rumours that Bayern are interested in Marc Roca, as they need a deep-lying playmaker. After Xabi Alonso’s retirement, Bayern are desperately seeking for such a type of player. This would enable Thiago to play further up the pitch in more dangerous spaces. Against Arsenal, there were quite a few situations where Thiago had to fall back between the centre-backs. In this role, his talent was somewhat wasted. 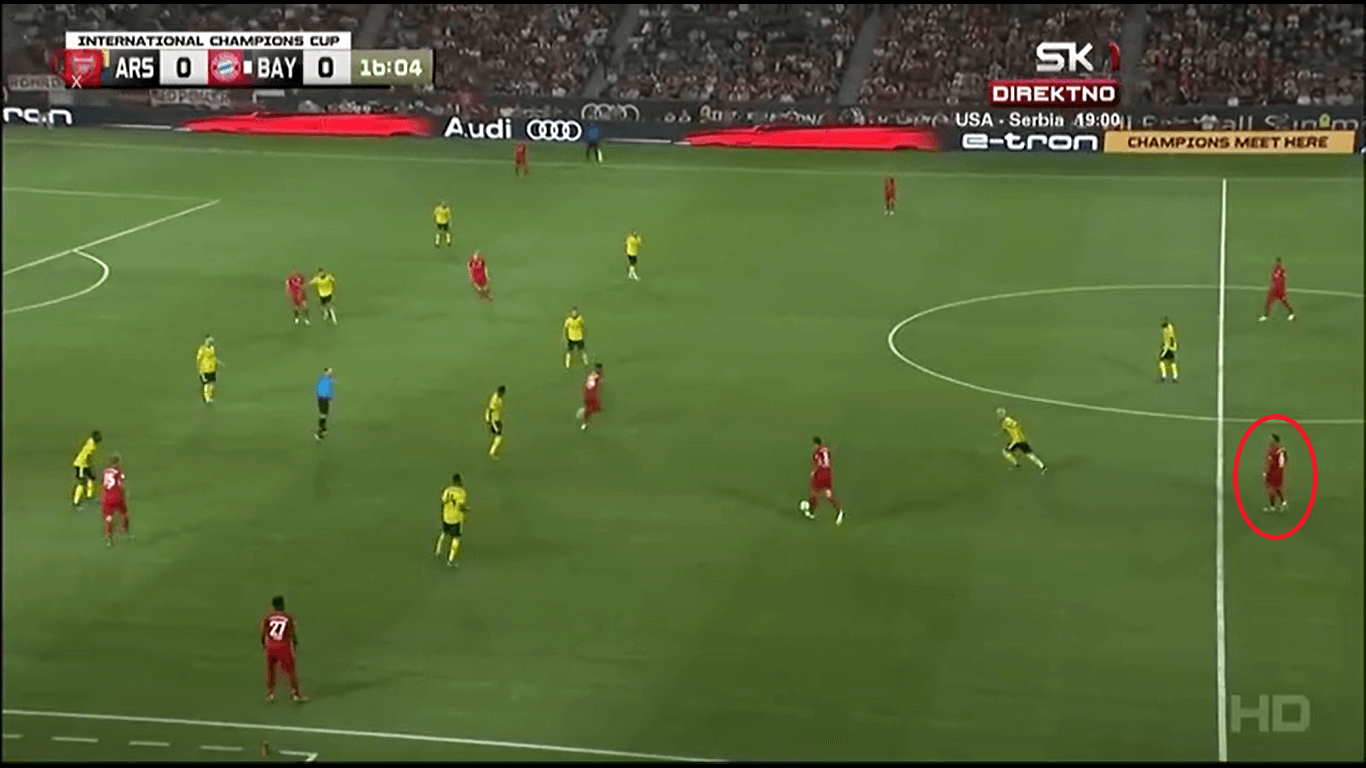 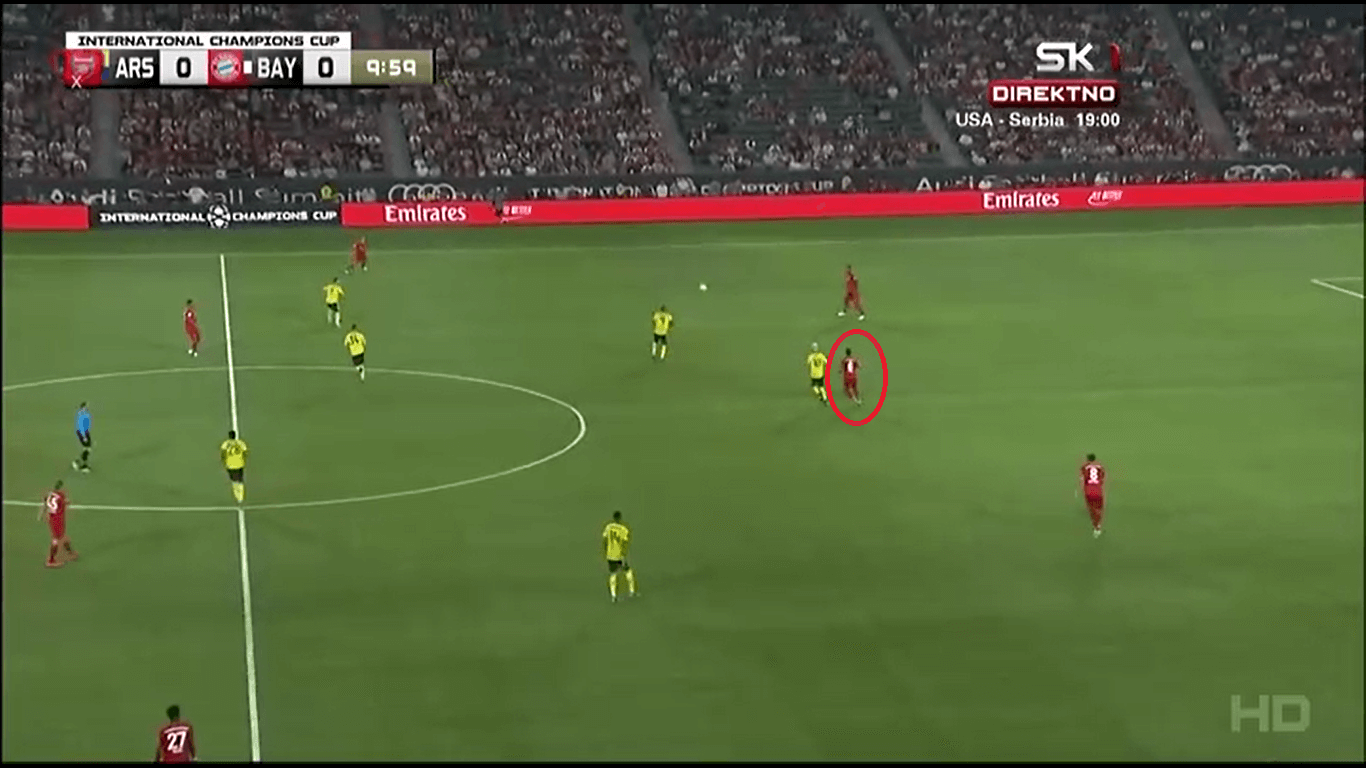 In such situations, you want Thiago in more advanced positions, where he can be more creative. Thus, Marc Roca could be a good signing for Bayern.

Vertical passes combined with a layoff to a third man are usually a good idea. Bayern proved against Real Madrid how effective this can be. There is an incredible build-up scene, where Bayern use this pattern thrice and fulfil a perfect combination game. 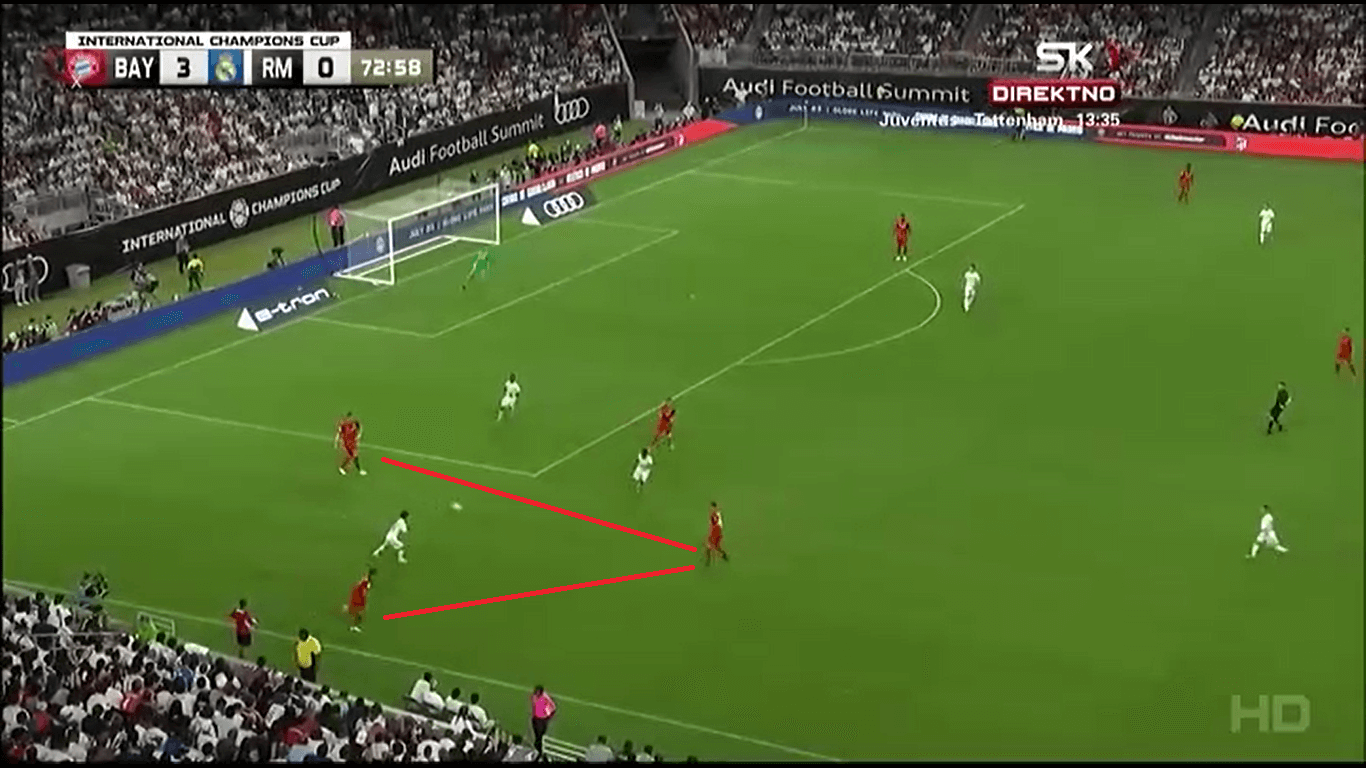 It begins with Niklas Süle, playing a vertical ball to Kimmich. Once again the positioning in the gap is quite helpful. Nonetheless, it requires some work to solve the situation, as Madrid try to press aggressively. 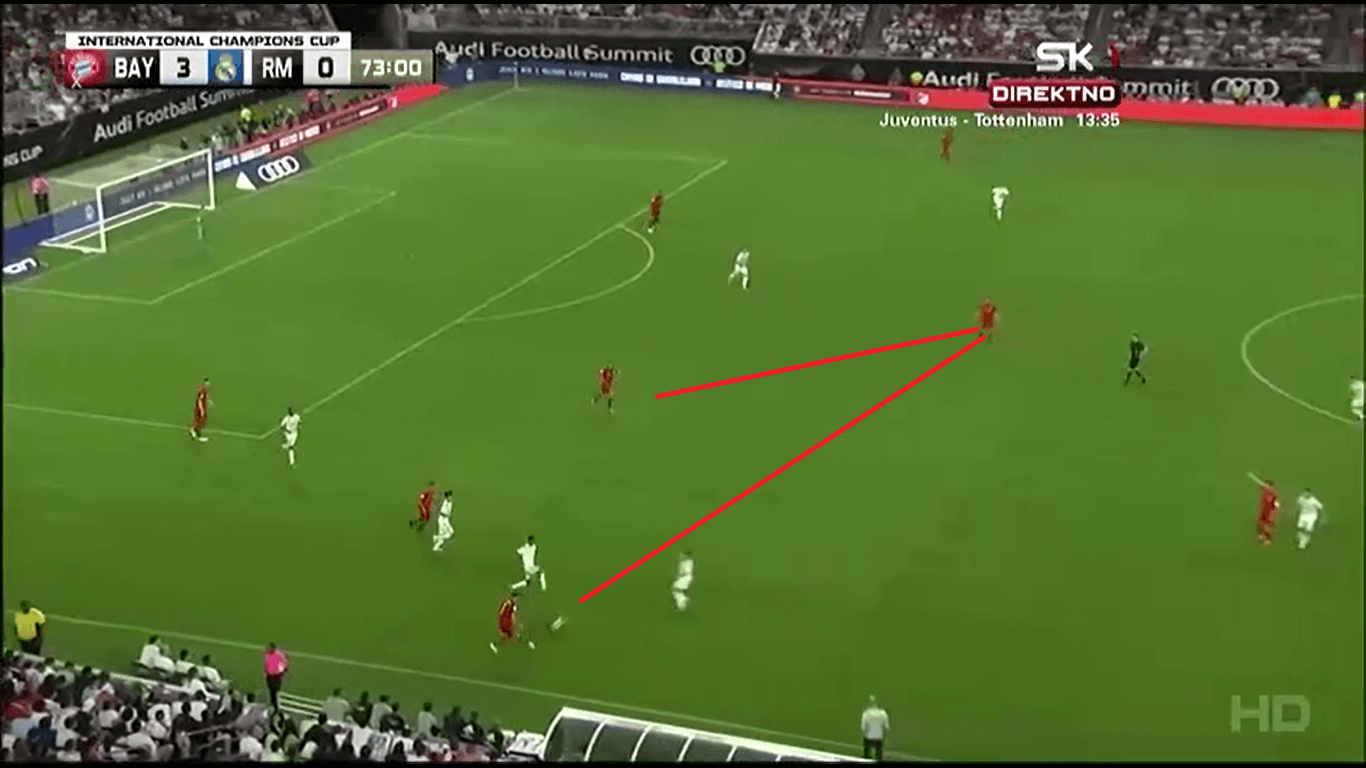 On the wing, Benjamin Pavard is attacked by two opponents, but he manages to play the ball into the centre, where once again the ball is laid-off. 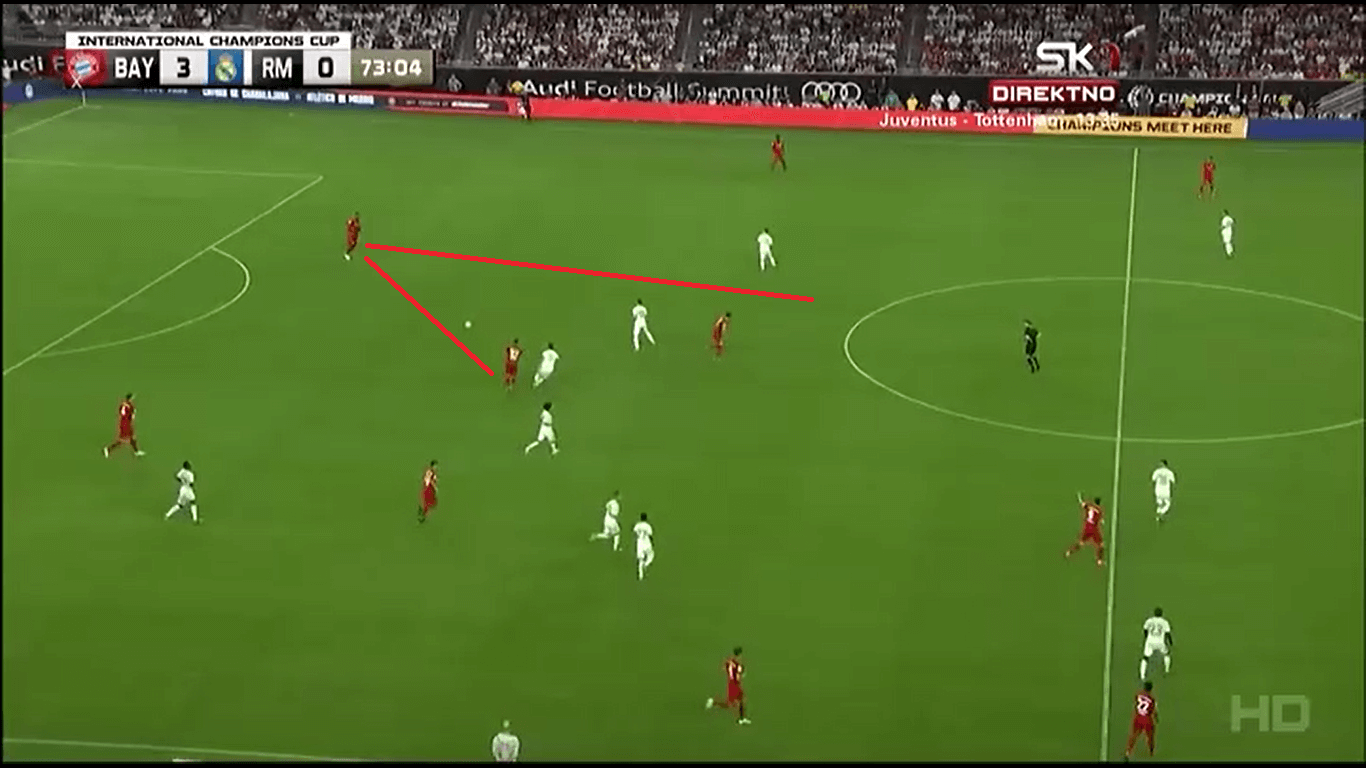 Bayern are able to rapidly build a new triangle via Jérôme Boateng, who is able to play a sharp vertical pass into the open space. Bayern have outplayed the press and attack now in a four against four situation.

Also, Bayern tried to build triangles away from the play in areas they wanted to overload. In the image below, it is the right-wing they overloaded. The 2-2-box-concept in the first build-up line seems also like a novelty for Bayern, as they didn’t use this last season. 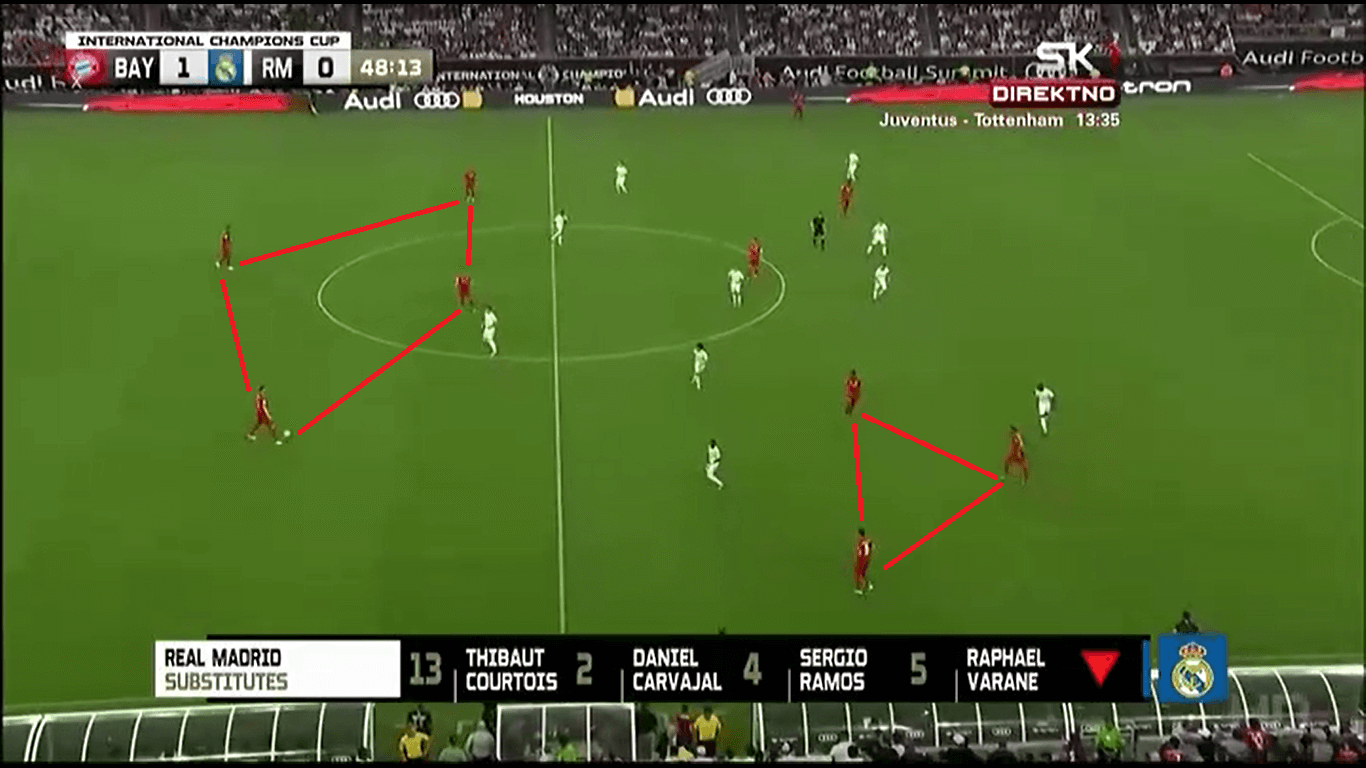 Defensive stability will be crucial for Bayern

A huge problem for Bayern was the defensive instability last season. They ran into a lot of counterattacks, as the defensive structure was not optimal. The intention behind the signing of Lucas Hernández was that his speed should help to defend such situations. Since he is still injured, there is no footage yet that could be analysed, but in theory, it should work out. Probably, we will not see Bayern defending high in crucial Champions League games anyway. Both against Arsenal and Real, they defended rather deep compared to what we are used from them. 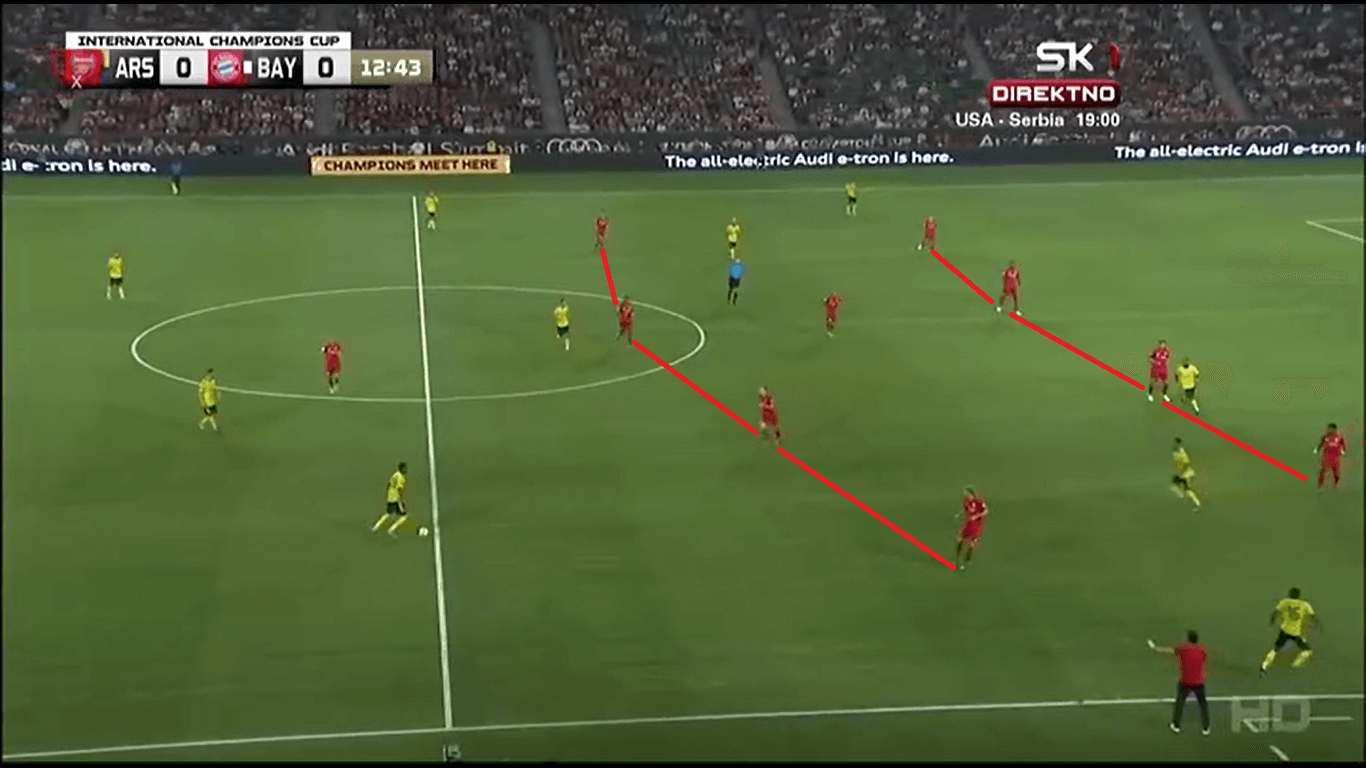 This is an example where the backline is only about 30 meters advanced. There is no pressure on the ball, which is odd, as you would expect Bayern to move forward and attack the player with the ball. Furthermore, the 4-1-4-1 shape offers some space between the two 4-man-lines. The formation could be a bit more compact. To reach that, the backline could move forward.

However, Bayern do not stay strictly in this structure alone. The players are rather encouraged to move out of position if this is according to the situation. The image below provides an example of two Bayern players moving out of the defensive structure in order to track down the opponent. Therefore, the defensive patterns are more flexible and the players should restrict their opponent’s movement at any terms.

Niko Kovač seems to prefer the 4-1-4-1 system and it looks like he will use this formation throughout the season. However, there remains the idea of an asymmetric back-three, which would help Bayern to better use their player’s abilities. This could look as follows: 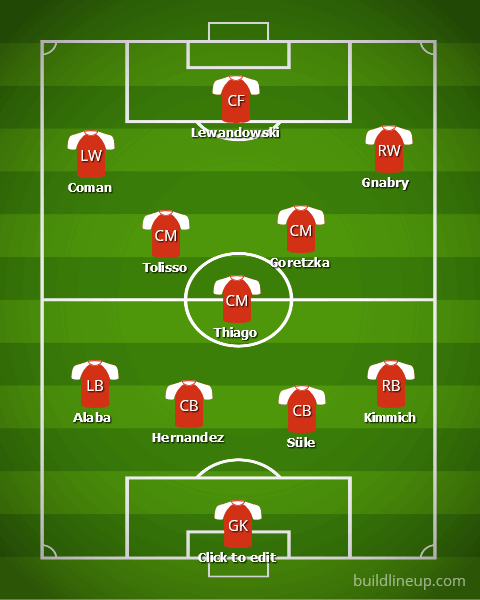 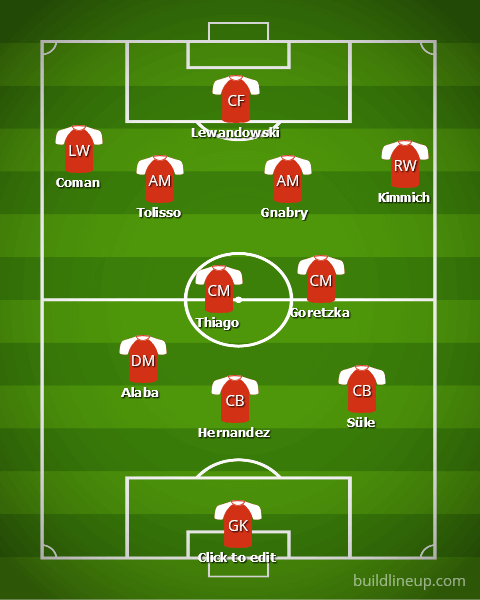 Left-back David Alaba played such a role under Pep Guardiola. In that era, Alaba was highly successful in playing a flexible role as a left-halfback moving forward and attacking the left half-space. If Leroy Sanè should be signed, he could also occupy the left-wing instead of Kingsley Coman, a role that he also played at Manchester City.

On the right-wing, the pattern of Kimmich bombing down the wing and Serge Gnabry shifting into the centre is well known. 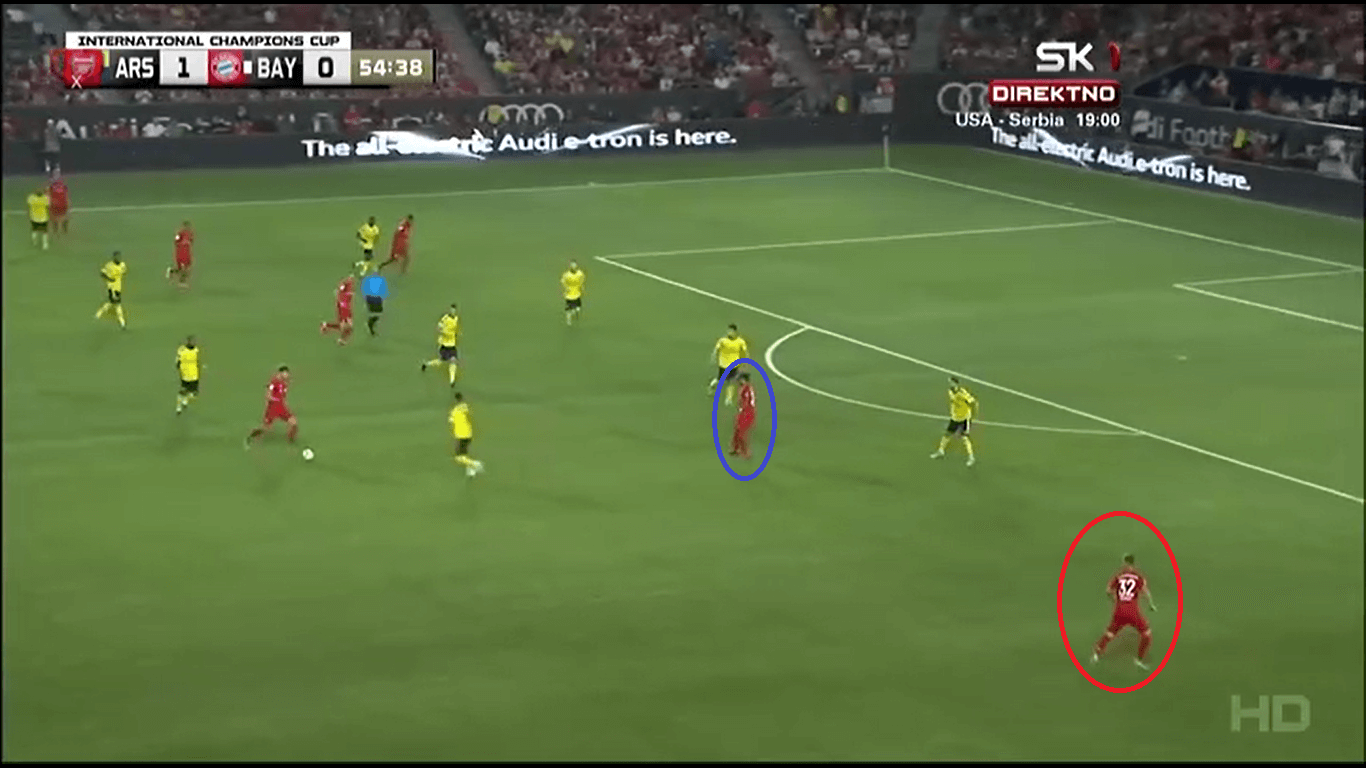 Here, we have a recent example of this pattern. This suits both their game, as Kimmich is a dangerous weapon with his crosses from the wing, while Gnabry’s finishing abilities need to be underlined. With an occasional back three, Kimmich would not have to worry so much about defending his wing, which is currently one of his main problems.

Bayern seem to be on the right path. Even though there are still some transfers expected from the Bavarians, it is possible to predict how they will play to some extent. The biggest surprise is, without doubt, their much-improved possession game. There are some rumours that the new assistant coach Hansi Flick, former assistant to German national coach Joachim Löw, has a great impact on the team.

No matter what the reason for this evolution is, there is no doubt that it helps Bayern a lot. If they can bring in Marc Roca and use Thiago higher up the pitch, they should probably improve more. Defensively, they seem to be more cautious. A lot will depend on their ability to overcome the defensive problems of last season. If they are able to do so, Bayern can for sure play a great season.