Marcus Thuram is a 21-year-old winger from France who joined Borussia Mönchengladbach this summer for a reported fee of £8.1 million. Last season he was among the most important players of his former club, Guingamp, who were relegated from Ligue 1 last season.

Besides Stefan Lainer and Breel Emboli, he’s the third big signing of Gladbach in this transfer window and should replace Thorgan Hazard who joined Dortmund. This tactical analysis in the form of a scout report will examine the strengths and weaknesses of the young Frenchman.

Thuram usually plays on the left wing and positions wide to provide width for his team. He likes to receive the ball in the wide areas and mostly starts to dribble from this position or tries to find a teammate with a pass.

The young winger positions himself, most of the time, near the touchline to create some distance between himself and the opposing full-back. As his heatmap below shows us exactly this since the space near the touchline is red, we also see two additional things. Firstly, the Frenchman also shifts in sometimes higher up the pitch, as we will discuss later in this paragraph. Secondly, he’s not in his own half very often. This will be examined later in this analysis when we come to his defensive abilities.

The young winger often uses his acceleration and pace to make horizontal runs which are hard to defend for the opposition. These movements are not easy to defend for the opposition’s defenders since they need to communicate with one and another who should follow him. Unusually, the according full-back follows him and so the centre-backs would have to mark him. However, this requires good communication and quick decision-making by the opponents. In the example below, Thuram receives a great through ball after a horizontal run and nobody really follows him due to a lack of organisation. The winger uses this chance to score.

Although, the young Frenchman doesn’t just make horizontal runs to receive through passes. He also uses this movement to create space for his full-back who pushes forward. Last season it was mostly his teammate Pedro Rebocho who was the left-back who supported him on the left wing. Thuram often shifted in to position in the half-spaces to avoid himself and Rebocho occupying the same zone on the wing.

Furthermore, the French winger joins his striker in the box when a teammate is in a good crossing position on the opposing wing. Since he’s 6”4’, Thuram is also able to win aerial duels. He won on average just 44.7% of his aerial duels last season in the Ligue 1, which isn’t outstanding, but it’s not a bad value for a winger nowadays since they usually rarely go into aerial duels.

Ability on the ball

As explained above, Thuram often positions wide to create some distance between himself and his opponent and start a dribble. The 21-year-old winger mostly uses his pace and stamina, combined with his good technique, to dribble past defenders. In light of this, he tries to generate the space between him and his opponent to pick up speed. In the images below, he uses his acceleration to get past the Belgian full-back Thomas Meunier and then still has got the vision to find his teammate with a low cross. 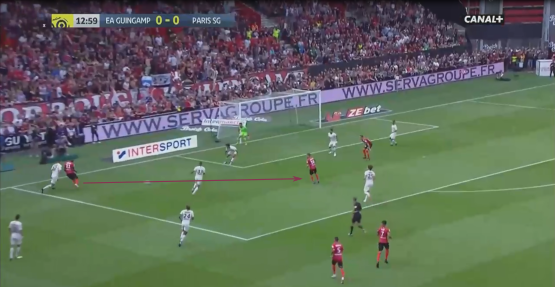 On some occasions, the Frenchman isn’t positioned as wide as usual and receives the ball with his back to the opponent’s goal. In these situations, he’s unable to use his speed to get rid of the defender so, he uses his stamina to get his body between himself and the defender. He also tries to get into the right body position before he receives the pass as in the image below.

However, the greatest reason why he is such a good dribbler is his undeniable technique. He tries to touch the ball with almost every step to keep the ball tight to his feet which makes it hard for the defenders to win back the ball. However, he almost exclusively uses the outside of his right foot when he dribbles and is able to keep the ball under control even when he dribbles with high tempo.

Besides this, Thuram is always looking for a surprising action which the defenders wouldn’t expect him to do. The Frenchman has got the technique to execute these ideas. In the image below, he dribbles through two defenders to beat them and exploit the free space behind them. 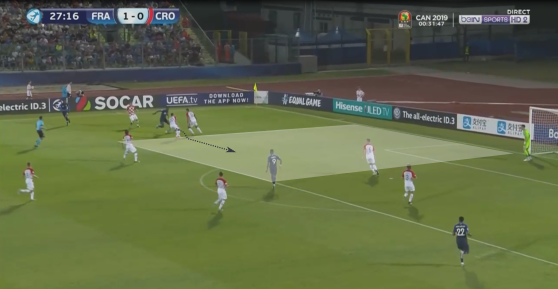 Thuram loves to dribble and that’s why he started with an average 9.05 dribbles per game last season in the Ligue 1. However, in some situations, the young winger just wants too much and chooses the wrong way. Instead of choosing the easy option, he wants to dribble past several opponents. Even though he needs to try such amazing moves to create sensational moments, on some occasions, he needs to learn that it makes more sense to choose the easy option. This is also the main reason why he completed, on average, just 48.7% of his dribbles last season.

Thuram is always looking for a great through pass to create a goalscoring chance. He often tries to dribble a few steps into the centre and then find his teammate upfront with a vertical through ball. In these situations, he needs to work on his timing since these through passes aren’t always well-timed and because of that, easy to defend. Due to that, his passing accuracy last season was 77.4%. He’s quite a good passer of the ball, but he needs to work on his timing when it comes to these through passes. However, in the image below, he plays a great pass behind the last line of the opposition’s defence.

Usually, when the young Frenchman plays a simple pass into the centre, he instantly starts an already described run into the middle to create a new passing lane. In these cases, he once more uses his pace to get into a new position.

Even though he’s a left winger, Thuram doesn’t cross very often. Last Ligue 1 season, he crossed on average just 2.14 times per 90 minutes. Furthermore, the Frenchman almost never delivers a usual high cross but instead, he tries to find one of his teammates in the centre with a low cross. Maybe he will deliver more high crosses this season at Gladbach when there are strikers like Embolo or Alassane Plea who can score by converting his crosses.

As already explained, Thuram is always looking for special actions and is a skilful player. In light of this, he often uses step-overs, other tricks and backheel passes like in the image below.

Thuram scored 13 goals last season in 38 games, which is a pretty good value for a 21-years-old winger. However, there isn’t any typical pattern of how he scores his goals. Five of these goals were penalties, four were headers, one was after a counter-attack; which is shown in the images below, one was a shot from outside the box, one was after the through ball after his horizontal run; which was shown above and one was a tap in after a free-kick. As you can see, he has got several ways to score goals.

Four heading goals are a lot for a winger, but you have to consider that he’s 6″4′ and also has already played as a central striker several times in his career. In the shot below he uses his height paired with his jumping power to score after a free-kick.

The young Frenchman was often caught out of position when the opponents were in possession and so his left-back, Rebocho, had to defend the left side on his own. In these situations, he showed a lack of discipline which could cost him his place in the starting line-up at Gladbach since Marco Rose’s system and tactics are only effective when every player gives 100%. Especially when it comes to the work against the ball.

However, when Thuram was in the right position to support his teammate on the wing, he used his speed and stamina to win back the ball for his team like in the image below. Even though he’s a bit behind his opponent, he’s able to make some ground to get into the duel with him and then uses his strength to bring his body between the opponent and the ball.

This scout report showed that Thuram could really freshen the Bundesliga and become an important player for Gladbach this season. Especially his ability on the ball and his ease makes it so hard to defend against him. Besides, he showed that he’s able to provide a goal threat by scoring his 13 goals in 38 matches.

However, he needs to work on his decision-making in some situations and the timing of his through passes. Anyway, it will be interesting to watch how Rose will implement him in his system and how fast the young Frenchman can adjust to the Bundesliga.