For the last seven seasons, the Austrian Bundesliga title has been won by Red Bull Salzburg. The financial resources of the Red Bull group have resulted in a recruitment and player development system in Salzburg that is the envy of a lot of clubs with more tradition and history. While the eyes of the footballing world are focussed, in Austria, at least on the trajectory of the perennial champions there have been other interesting narratives that have been worth following. The likes of LASK Linz and Wolfsberger have impressed through intelligent recruitment and flexible tactical styles of play.

This article will concentrate on the style of play of LASK Linz who, at the time of writing, sit third in the Austrian Bundesliga behind Red Bull Salzburg and Rapid Vienna. Hailing from the city of, perhaps unsurprisingly, Linz, we have seen LASK develop a flexible 3-4-3 system with aggression in and out of possession under their coach Dominik Thalhammer. The 50-year-old coach is something of an outlier in that he has not had experience as part of the Red Bull setup. Despite this, however, there are similarities between the game model and principles of play that we see from Thalhammer and those that are accepted to be part of the Red Bull game model.

In terms of their tactical shape, LASK tend to play in a 3-4-3 shape, indeed, they have used this system in 72% of their minutes played so far this season. Within this system, there is a lot of rotational movement, especially with the front three. 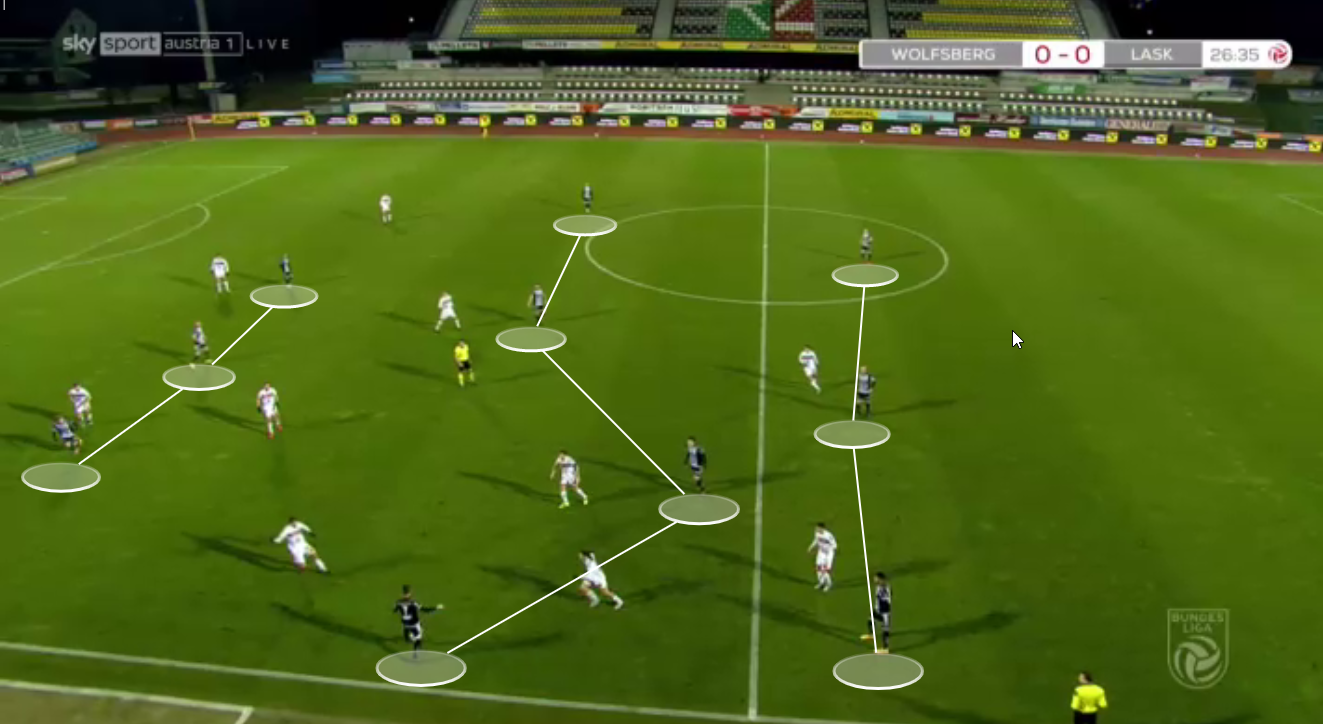 In this image, we can see this shape in action as LASK are in possession of the ball. It is interesting to note that on the highest line, in the attack, the three players are relatively narrow in their starting positions. This tends to be flexible as the wide forwards can drop out to stretch the opposition defence or drop towards the ball in order to help with the progression of the ball.

This shape lends itself to the possession focussed style of play that LASK prefer and, at the time of writing, they lead the Austrian Bundesliga with an average of 60.3% possession.

In their attacking style, LASK are extremely progressive. For all that they are a possession dominant team, this is not passive in their attacking play. Instead, they look to play the ball quickly to the highest line. Indeed, they again lead the league with 90.66 progressive passes per 90 as they play quickly through the thirds into more advanced areas.

It is impressive that LASK combine the most possession and the most progressive passes in their game model. 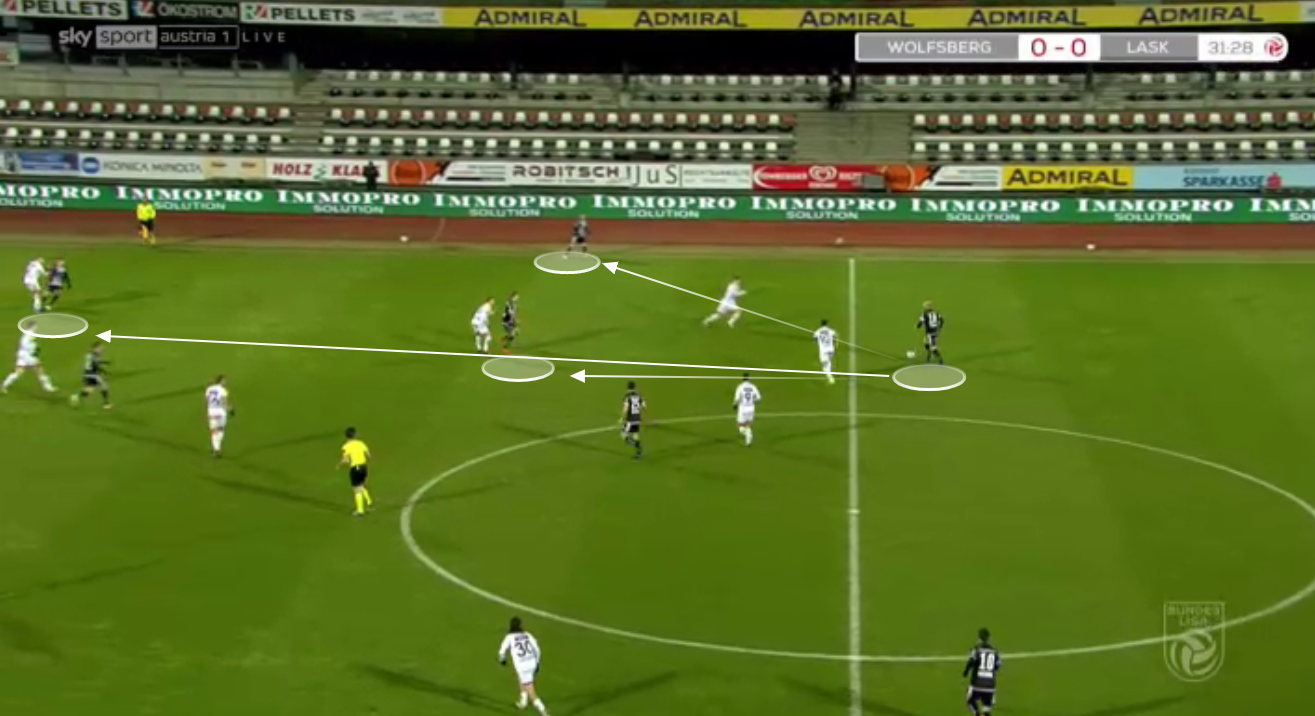 We see an example here of this in action as LASK are looking to progress the ball from the first line into a more dangerous position. The player in possession has the ball in the right half-space and there are two passing options that are open that may be ‘safer’ and lead to more secure possession. Instead, however, the player in possession finds the driven pass that accesses the highest line.

Each player within the LASK system is encouraged to play with more risk when in these positions. This is the mark of a team that is coached specifically to play to their coaches game model and principles of play. 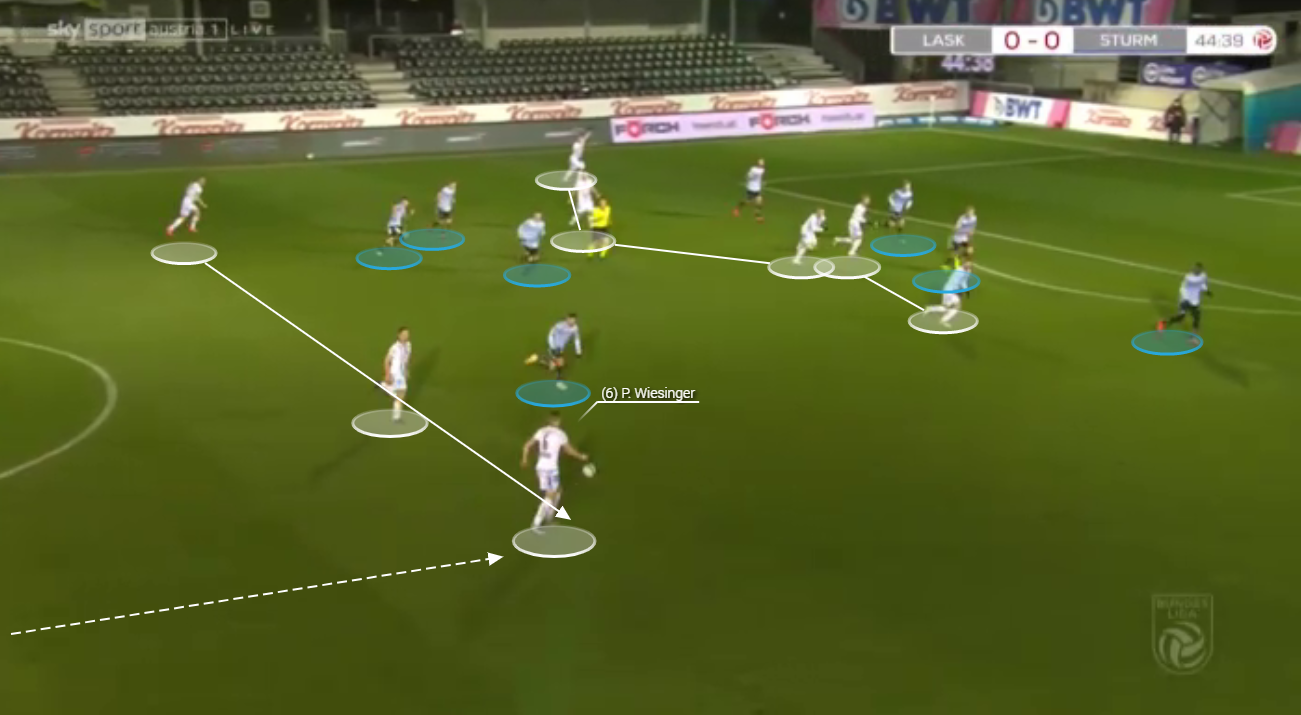 As LASK progress the ball into the final third they tend to end up pulling the opposition over to the ball side of the field. This is a result of the positioning and rotations of the forwards and midfielders who are very good at showing at different angles in order to present passing options. 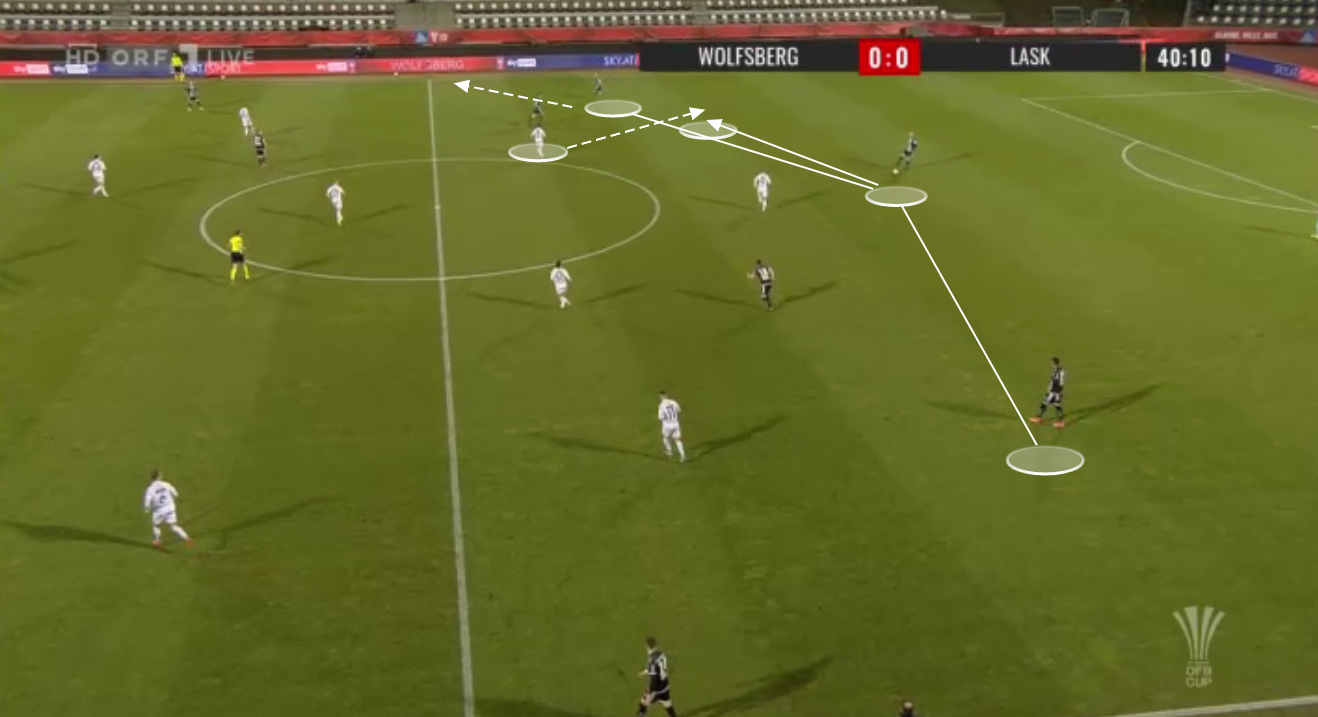 These rotations and structures are extremely effective in terms of progressing the ball. 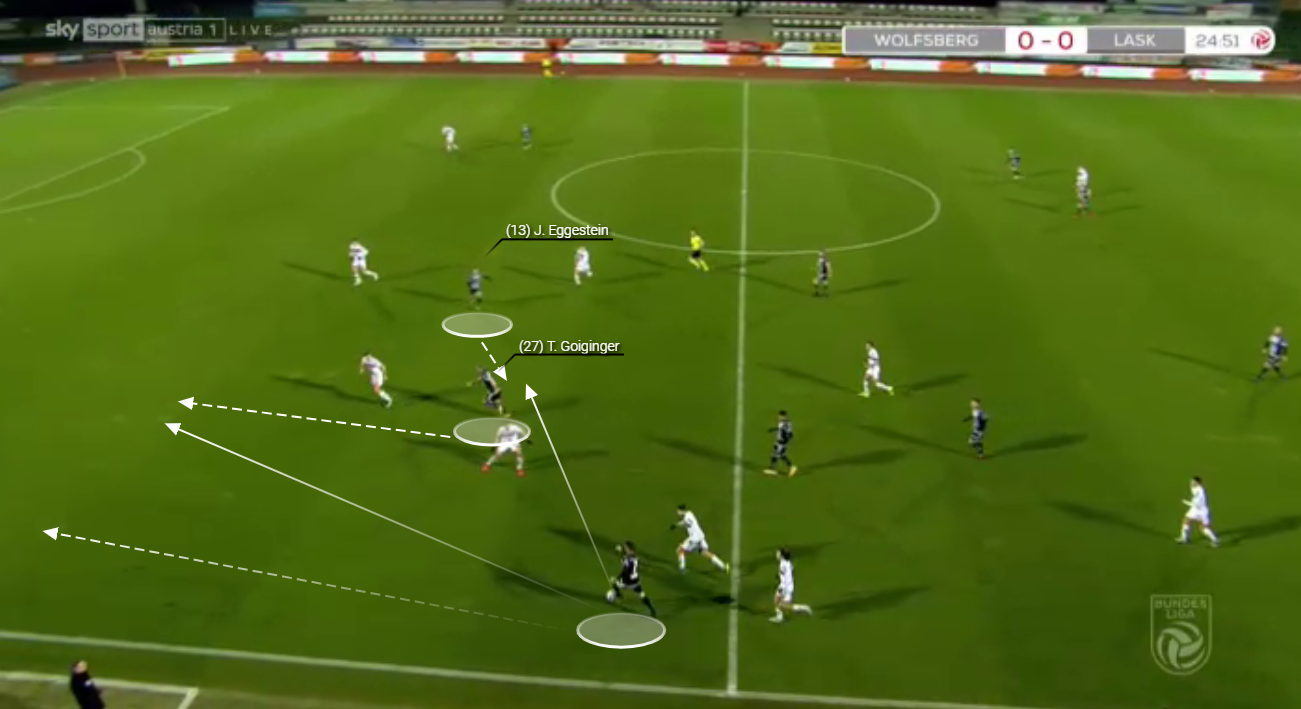 When LASK progress the ball into the final third they tend to use high-low rotations in order to provide angles in the attack. We see an example of this in this image as LASK are attacking down the right-hand side of the pitch. The central forward (Eggestein) drops low towards the ball while (Goginger) moves quickly to a higher position. These movements when combined stretch and break the defensive structure of the opposition and allow LASK to move into attacking positions in an effective manner.

Out of possession, LASK are very aggressive. At the time of writing, they are the most aggressive pressing team in the Austrian Bundesliga in terms of PPDA. This is a metric that is designed to measure the pressing intensity of a team by showing, on average, how many passes a team allows the opposition to have before moving to engage them in a defensive action (a press). This is traditionally an aspect of the game in which the Red Bull clubs score highly as part of their identity when out of possession is that they press aggressively in order to regain possession as quickly as possible. At the time of writing Red Bull Salzburg have a PPDA of 7.57. LASK however have a PPDA of 6.18. 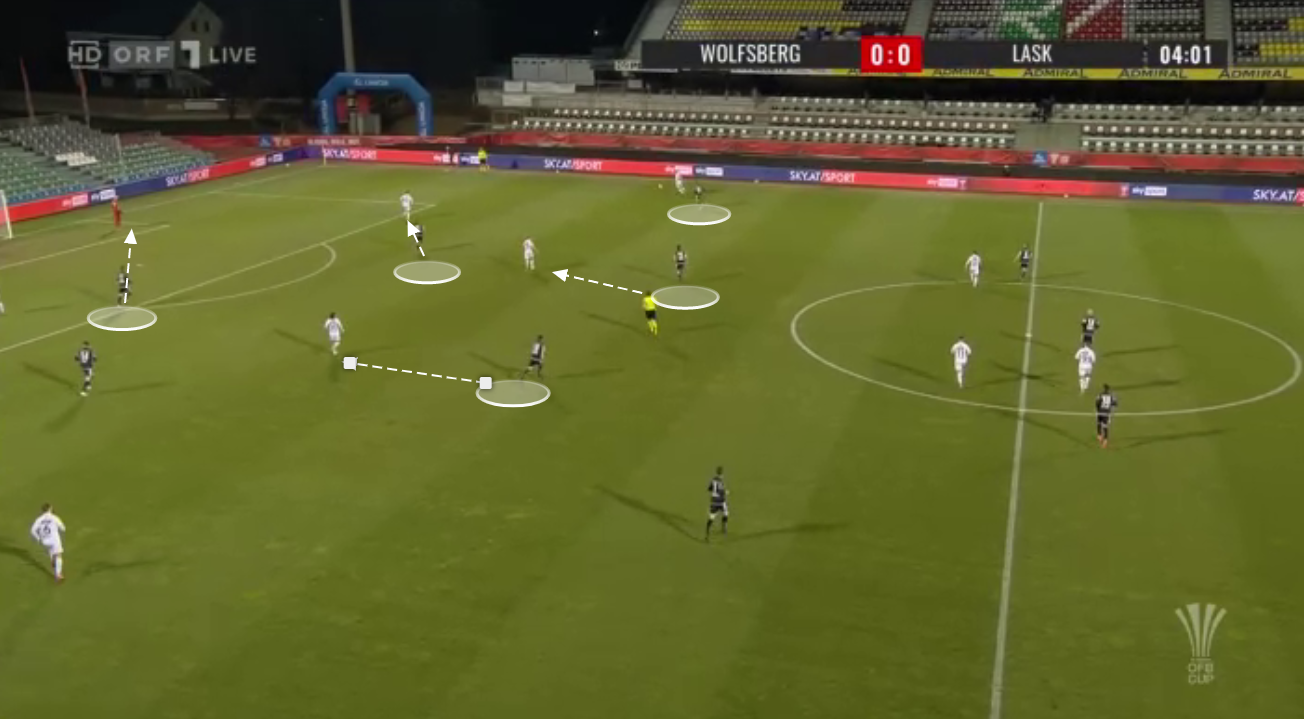 In this example we see the opposition looking to progress the ball although as they switch across to the far side of the pitch we see that the receiving player is facing his own goal.

Five LASK players move quickly to either engage the receiving player or move to closely man-mark an opposition player who could potentially receive the ball. As the receiving player then takes possession of the ball he cannot progress the ball safely and all of the passing options to come back towards his own goal are taken away. The ball is then won back by LASK close to the opposition goal. 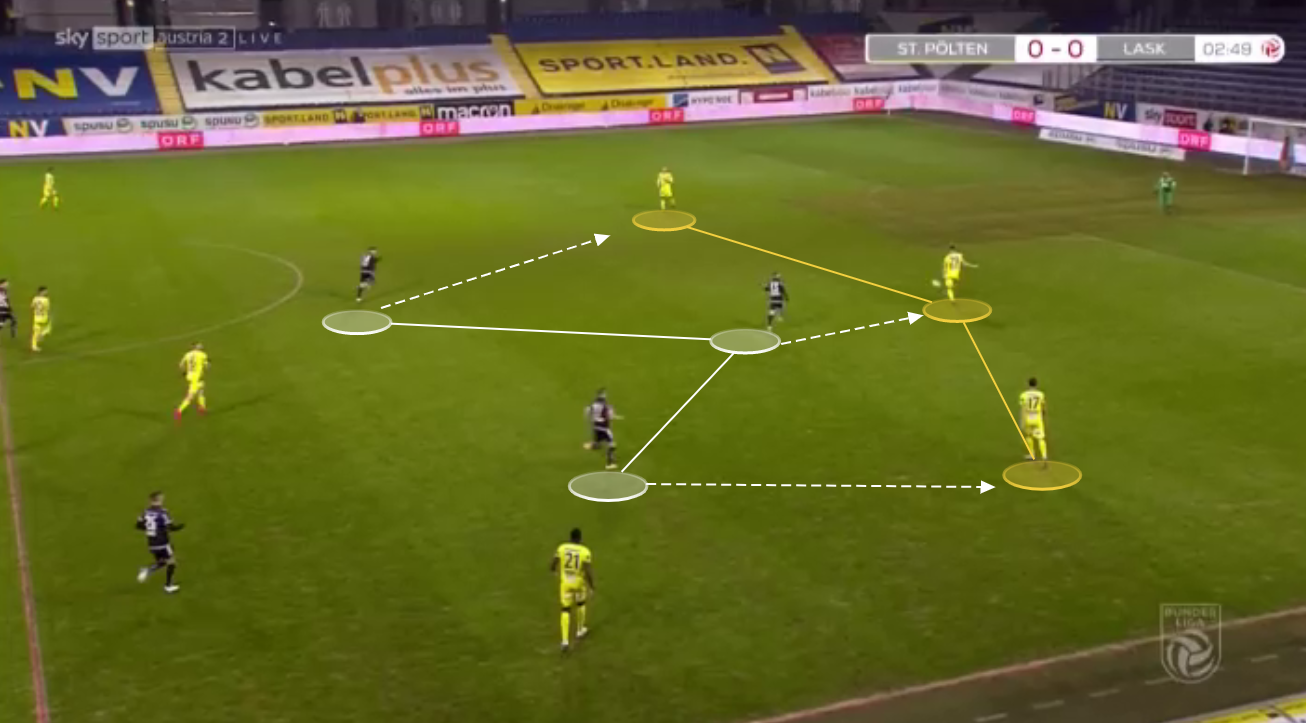 This effectively sees teams have to play in a more direct style when they face LINZ although some will still try to play from the first line and build from the back.

We see this in this image as the three attackers for LASK effectively go man on man against the three players on the first line for the opposition. As the ball is progressed the opposition are forced to play a longer pass to escape the press with LASK again regaining possession. 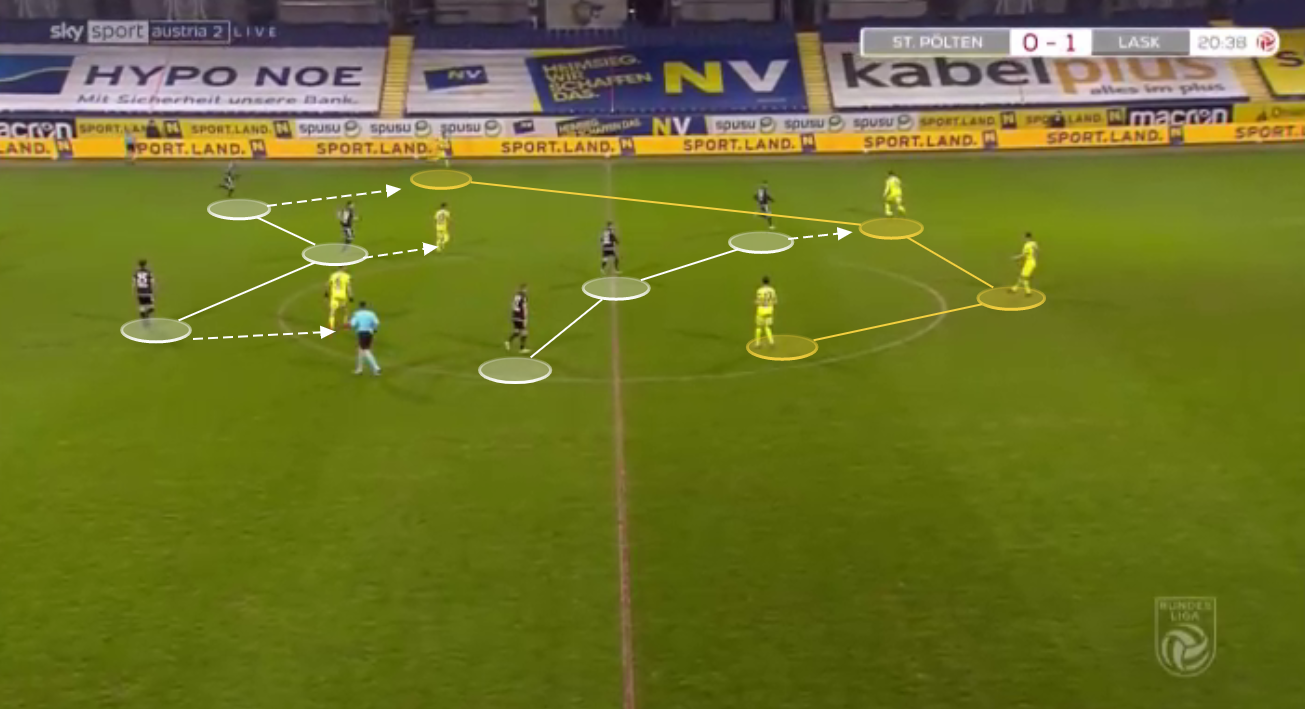 Here we see how difficult LASK are to play against when they are out of possession. They are so aggressive when moving into position to either engage the ball or move into a man-marking position. In the English Premier League, we have seen the Leeds United coach Marcelo Bielsa gain notoriety for the man-marking structure that he uses out of possession. We are seeing something similar with Thalhammer at LASK.

As the opposition, St Polten in this case, are looking to build out from the first line they are met with fierce resistance from LASK as the ball is pressed and forced back with no easy passing option that can be accessed in order to escape from the pressure.

LASK Linz are a perfect example of a team that is perhaps relatively unknown, outside of Austria, but who are extremely interesting from a tactical point of view. They have a fascinating tactical structure that is underpinned by a clear and consistent set of tactical principles which clearly come out in the way that the team play.

They have a set of interesting young players as well which makes them an excellent watch.

It is not often that a team can effectively outperform Red Bull Salzburg in their own key performance indicators but this is exactly what we are seeing from LASK and their excellent coach Thalhammer.