Matchday eighth of La Liga brought us a thrilling contest between Barcelona and Sevilla at the Camp Nou. And while the scoreline might suggest the Catalans demolished their Andalusian counterparts, in reality, the two teams were quite evenly matched throughout the clash.

This tactical analysis will aim to reveal both teams’ tactics and bring you analysis of how Barcelona ended up snatching all three points on the night despite struggling immensely.

Not much has changed in the Catalan camp. Ernesto Valverde went with his usual tactics and deployed the team in a 4-3-3 system. There were two major exclusions to their usual starting lineup, however, as Sergio Busquets and Antoine Griezmann both moved to the bench and Arturo Vidal and Ousmane Dembélé took their spot respectively. 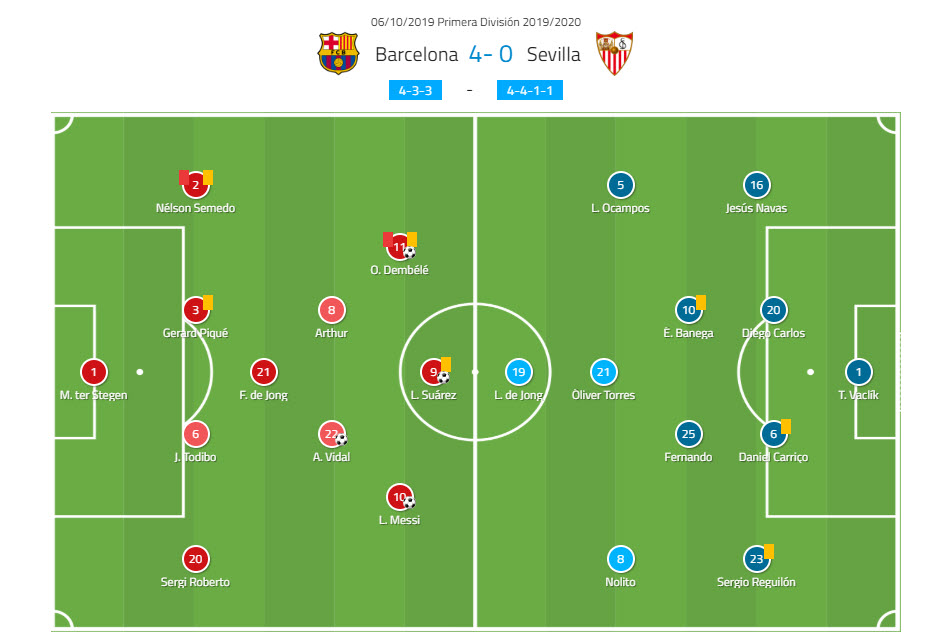 On the other side of the pitch, Julen Lopetegui deployed the Sevilla squad in a 4-4-1-1 formation that was later on transformed into a 3-4-3. But the Andalusians had a complete revamp as far as their squad went since they used a lot of reserve players in the mid-week Europa League clash with APOEL.

But they were mostly in their strongest lineup when they arrived at the Camp Nou with no notable absences in their midsts.

Lopetegui’s teams are quite famous for their relentless pressing and possession style football. In many ways, they have similar values to the ones Barcelona hold high on their pedestal. And true to their coach’s reputation, Sevilla went out guns blazing with an aggressive approach to the game.

They knew they had to press Barcelona and not allow them to play their game. From the very get-go, their tactics revolved around pushing up with numbers and using a heavy man-marking strategy to force long balls from the Catalans.

Even though they tried to effectively mirror Barcelona’s lineup and put one marker on each of their players in the build-up, special attention was given to Frenkie de Jong who constantly had one or even two players guarding him and making sure the ball would never get to him.

Notice below how tightly marked De Jong is and how Sevilla’s pressing quadrant from the first shot simply moves in unison as the ball is sent from one side to the other. De Jong is practically used as a reference point, and while other players are given some space, the young Dutchman is never without a follower breathing down his neck.

Barcelona, however, realised what Sevilla were trying to accomplish with their tactics so they would instruct Arthur Melo to drop deeper and assist the build-up and either free De Jong or just provide an alternative way out of the defence.

Since Sevilla either pressed with numbers when they were going high or with two forwards when staying in a mid-block, Barcelona just had to add an additional body to the build-up in order to bypass the first line of their defence, like you can see in the examples below.

In both instances, Sevilla’s press is broken by Arthur’s movement deeper as it gives the ball-carrier from the defence two passing channels to choose from as opposed to just one in De Jong, which was blocked most of the time.

When defending deeper, Sevilla transitioned to a 4-4-2 or even a 4-3-3 system, depending on where the ball was at the moment. Even when Barcelona were advancing up the pitch, they would still meet them aggressively and with numbers, which made the build-up and maintaining possession that much more difficult.

The Catalans, however, adapted to that as well as they would use Lionel Messi’s movement to add bodies into the central areas. Notice below how the Argentine slots just a bit deeper so Barcelona can combat Sevilla’s numbers and progress the ball through the middle.

Apart from Messi, Vidal also played a crucial role as he was the midfielder with most freedom on his hands. While De Jong and Arthur would usually have a deeper role, the Chilean often interchanged places with both the forwards and Sergi Roberto, positioning himself higher up the pitch.

If Messi dropped deeper, Vidal would be on the shoulder of the defenders, either dragging them wide or simply occupying them to create more space in the middle. The same thing happened in the last example when the Chilean dragged away Sevilla’s midfielder to open up a channel towards Messi. Below, we can see him in a more advanced role.

But he did much more than just surge forward. If Roberto overlapped, Vidal would stay more centrally either as a cover or as support in attack and if the right-back stayed behind, the midfielder would go forward, sometimes staying behind the striker and sometimes next to him.

As a result, Vidal was mostly omnipresent, contributing both to the attack and defence and staying true to his the box to box tag above his name.

In general, Barcelona were very disjointed both in attack and in defence and it could be argued that their victory basically came down to two aspects: individual brilliance and Sevilla’s finishing woes.

The Andalusians were more organised and had their tactics well in place. They knew they had to play to Blaugrana’s weaknesses – pressing them high, cutting off the midfield connection and the front three, and stop the overlaps.

Granted, without Jordi Alba overlaps became far less of a problem than they used to be but Sevilla came prepared nonetheless. When they forced Barcelona wide, they made sure to double down on the flanks to stop the potential overlaps of the full-backs.

The only instances when they failed to do so happened in transition and upon losing the ball. With Dembélé back in the squad, and with Semedo on the same flank, Barcelona finally had some pace going forward and whenever Sevilla’s press failed, they punished them with speed and clinical finishing.

Even though most of the time the away team had the wide areas well covered, Barcelona would aim to create numerical superiorities and force 2 v 1 situations with the last defender. In fact, that was exactly how the first goal came to be as you can see in the example below.

Dembélé and Semedo combine and attack Sevilla’s backline with pace and skill. Since they outnumbered them out wide from the start, the Andalusians could not defend against it and a well-timed cross followed by Suárez’s sublime finish resulted in Barcelona’s lead.

But apart from those flashes of brilliance, the Catalans have lots of structural issues. When pressing, they would not go high but rather just aimed to block the passing channels and force Sevilla into a mistake, as can be seen below.

And while that sounds good in theory, they left far too much space between the lines and the Andalusians could easily bypass their pressing tactics. Notice in the next couple of examples how that translates onto the pitch. In all instances, Barcelona fail to put enough pressure either on the ball-carrier or the free man in the middle, which gives Sevilla an easy build-up scheme. 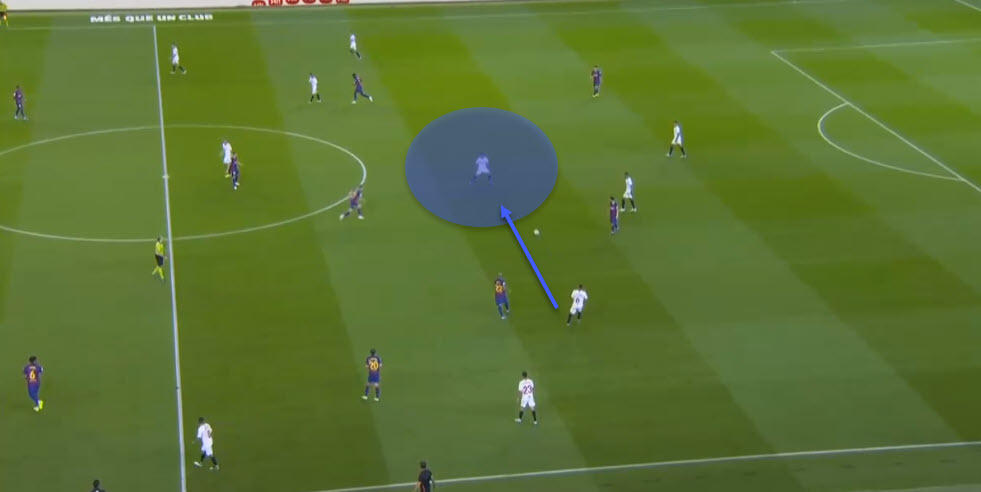 This was crucial in their chance creation because it gave them easy access to the wide areas, which they exploited quite well. If the man in the middle is given enough time and space on the ball, he can easily play a one-two with his teammate out wide, and that’s exactly what happened on numerous occasions.

Below, Barcelona are passive in their pressing tactics, which gives Sevilla enough space to play the ball through the middle channel and onto the wings. From there, the attacks move forward with pace.

This did not just cause a problem in the build-up phase but it also translated into their own half. Barcelona constantly defended with only nine men in their own half because both Suárez and Messi were generally far behind and with no real defensive contribution.

Just look below how much space and time Sevilla have on the ball and how they can distribute it forward with ease. Three players completely unmarked while Barcelona’s forwards apply no pressure at all.

That, combined with the constant threats out wide made for a deadly combination, and only Sevilla completely fluffing their lines and Marc-André ter Stegen making heroic saves ensured Barcelona would tally all the points.

Finally, we have to address Sevilla’s incredible misses on the night. Luuk de Jong missed four clear-cut chances just by himself and when we take a look at the numbers a bit more, we can see that this game was far from one-sided.

Barcelona registered an xG value of 1.82 and scored four goals on the night while Sevilla had a total of 2.84 xG and scored – none.

The gods of football are sometimes as cruel as they come and on Sunday, they were only smiling upon the Catalans. Still, their structural problems mean that a more clinical team could’ve done some serious damage to them and it feels like they have a lot of work to do if they want to compete with the best of them in Europe.