This tactical analysis will reveal the major aspects of both teams’ tactics. Seeking the answer to why Philadelphia Union struggled against Chicago Fire in spite of their victory. 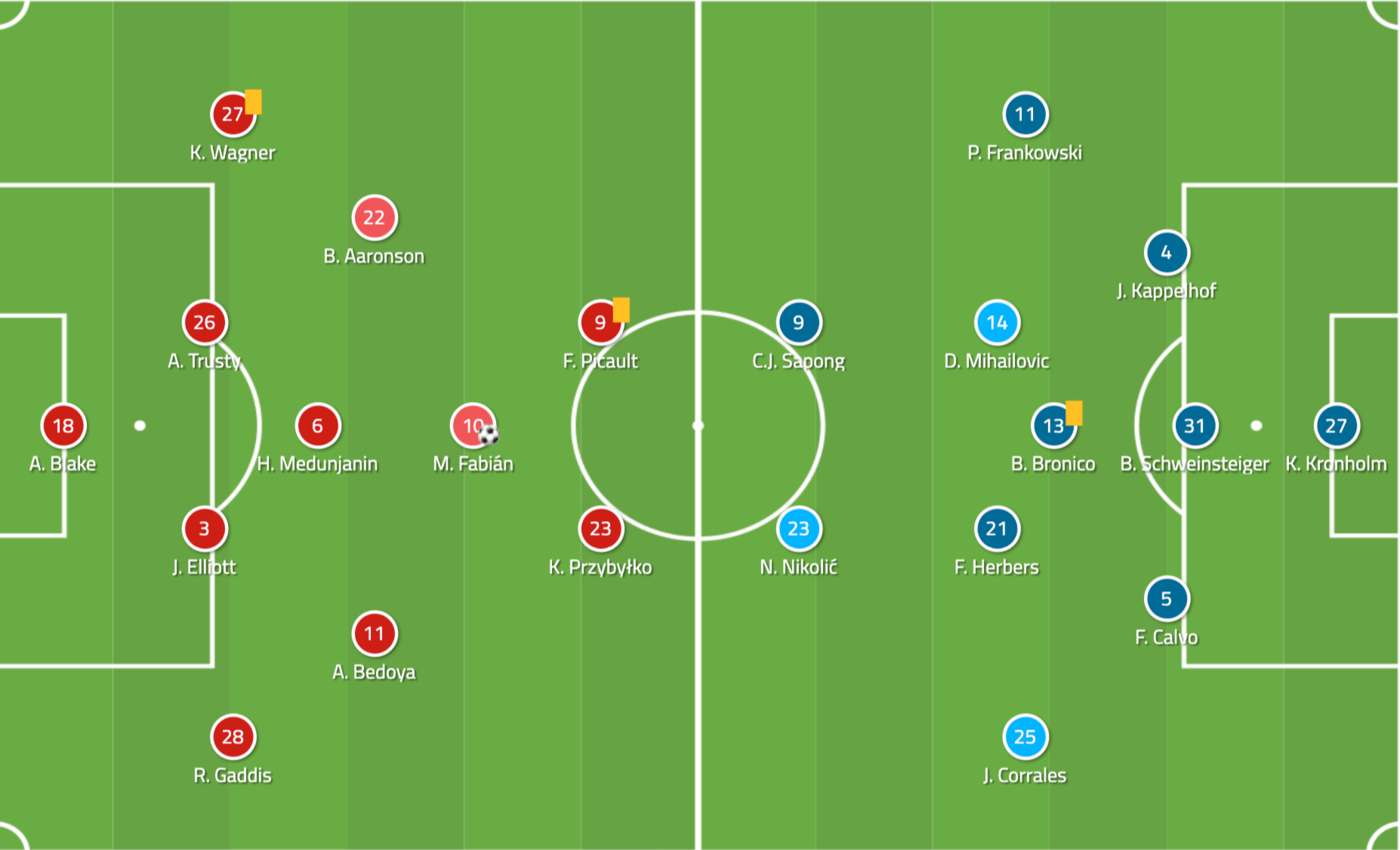 The home side deployed the usual 4-3-1-2 formation where the biggest change was the fact that Brenden Aaronson replaced Jamiro Monteiro who was out due to injury. Team captain Alejandro Bedoya had the usual freedom to join the first line, next to the attackers which foreshadowed an interesting question, namely, how will Chicago Fire protect the flanks. Whilst Marco Fabián often dropped centrally or moved outwards a bit to fill Bedoya’s position.

Veljko Paunović opted for a 3-5-2/3-1-4-2 structure to negate the opponent’s system. This formation theoretically could offer enough support in the last line as they create a 3v2 against the opposition two strikers. While they could close down the wings too. Of course, with Sapong and Nemanja Nikolić upfront, their major weapon was the counter-attacks.

Philadelphia dominated from the beginning

Although the game started with a Fire’s attack, Philadelphia were more dominant in the opening minutes. They had the ball more time, and once they lost it, they pressed high up the pitch to disrupt the opponent’s play and win the ball back. The aim was to force the opponent to one side where they could trap them. They even pressed the opponent’s goalkeeper and throw-ins too.

On that note, Philadelphia did a good job to prevent the away team from building out from the goalkeeper, though, Chicago still had an advantage that they could use against them. Against Chicago’s goal kicks, Philadelphia formed a 4-1-3-2/4-3-1-2 shape to stop the progression. Therefore, it created a 3v2 advantage for Fire. Usually, Fafà Picault and Kacper Przybyłko occupied wider on the two sides of Bastian Schweinsteiger to have access to Johan Kappelhof and Francisco Calvo.

This, of course, caused permanent trouble for Philadelphia in these situations. How to close down all three opponents in Chicago’s back staggering? In this situation below, it allowed to the goalkeeper (Kenneth Kronholm) to pass to Schweinsteiger, who then passed Đorđe Mihailović, who dropped next to Brandt Bronico, who was marked tightly by Fabián. Mihailović was loosely marked by Aaronson as he positioned a bit wider to gain access to the wing-back (Przemysław Frankowski). However, due to the good defending and bad decisions, Chicago struggled to progress up the pitch – at least could not make it at first attempt.

Nevertheless, due to the home side’s dominant style, the crucial part was how Chicago tried to eliminate Philadelphia’s tactics. Thus this section of the analysis will be focusing on the Union’s possession play.

In possession, the basic dynamics was the following: the two full-backs stayed deeper in the early phases to help the circulation, although Kai Wagner occupied a bit higher than Raymon Gaddis. In the centre, Haris Medunjanin stayed deep to offer a pass option. He sometimes even shifted to the half-spaces when the ball sent wide. Whilst Aaronson and Bedoya pushed forward.

Meanwhile, the guests formed a mid-block with a 3-5-2-0 formation. The zero represents the fact that the strikers did not put pressure on the Union’s centre-backs. They rather had the task to mark the deepest midfielder and blocking the passing lanes. When the ball was at Auston Trusty, Sapong dropped a bit to mark Medunjanin and Nikolić occupied a bit higher while covering the passing route. When the ball was at Jack Elliot, they switched.

Having said that, this pattern was not permanent as mostly Nikolić marked Medunjanin and Sapong shifted to block the passing lanes.

Furthermore, as I mentioned, due to Chicago’s man-orientation, Philadelphia were able to disrupt their mid-block and create space in there. Right at the second minute, the home side circulated the ball side to the other. When Gaddis received it, he instantly pressed by the ball-sided winger/wing-back (Jorge Luis Corrales). However, as Bedoya pushed forward in the half-space, he dragged the nearby opponent away which created a space for Gaddis to drive forward and opened the passing lane to Fabián. 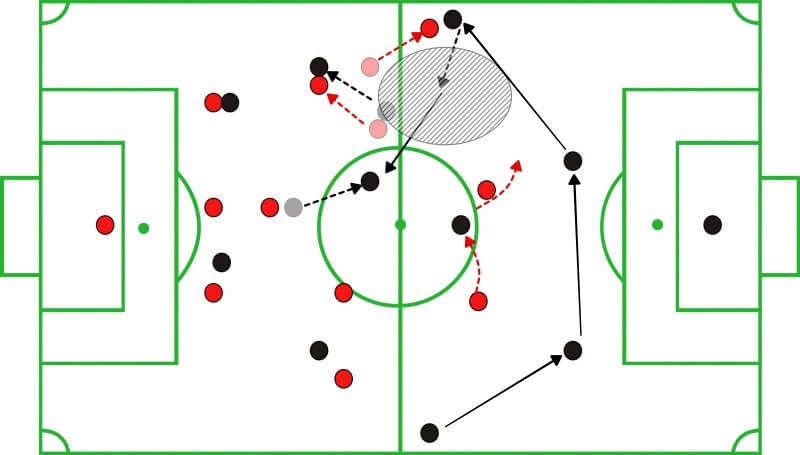 Of course, there were other ways to utilise the man-orientation. Since it was a fairly common scene that Fabián and Aaronson occupied in the opponent’s second line, it could create a space in the line. 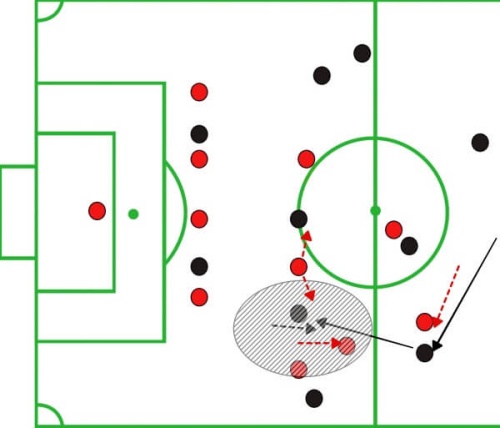 For example, in here, the Bronico stayed close to Fabián which created a space between him and Mihailović who pushed out of position to close on the advancing centre-back. Meanwhile,  Aaronson dropped to the vacated space in behind Mihailović to receive the ball from Trusty.

However, the most effective tool was none of them. As a common weapon, teams often tried to drag the opponent’s shape to one side to quickly switch to the far side and exploit the space there. Before Philadelphia Union’s leading goal, Chicago’s shape moved to the left-hand side to protect the space there, after a throw-in. This allowed the home side to take advantage of the open passing lane in between the lines.

Since Bedoya often occupied high, it pinned Corrales back to the last line thus Fabian Herbers had to outstep to close down the left-wing further up the pitch. Due to the improper second line shifting, it could create space between Corrales and Bronico.

However, Philadelphia could not take advantage of it. Due to the lack of support, Philadelphia’s full-backs could become isolated on the ball. Thus he could not access to the central areas and the only option was to pass forward down the wing with the hope that the attackers could pick up the pass. 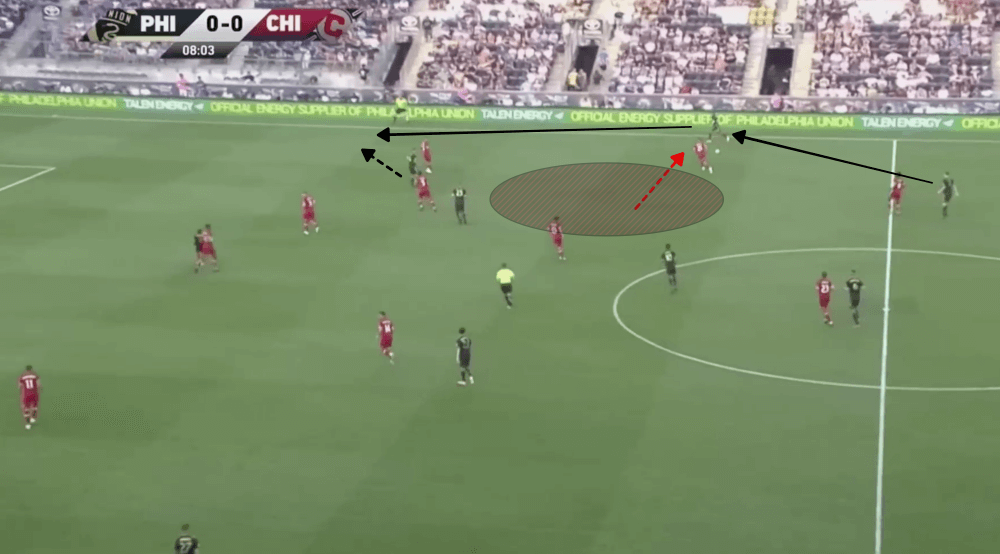 As this analysis showed, Philadelphia Union were not able to utilise the space that they created by taking advantage of Fire’s man-orientation. This was evident in the numbers as they pose a low threat to the opponent’s goal with producing 0.81 expected goals (xG). One of the reasons was the Union’s connection problems.

However, with the early goal, Philadelphia Union got into an advantageous position which was quite bad for Chicago Fire. In this MLS season so far, they had an average 1.5 scored goals per match while having an average 1.68 xG, therefore, they couldn’t make a come back in the clash as they did against Columbus Crew. As opposed to that game, now they only had half that much xG, 0.92.