The “Topspiel” of Matchday 3 in Germany´s 1.Bundesliga was the duel between RB Leipzig and FC Schalke 04. On paper, it looked like one big German club against another one. However, the signs ahead of the match could hardly be more different. While RB Leipzig got into the UEFA Champions League semi-finals against PSG last season, Schalke were nearly relegated into the second division. Even in this season, Schalke has still not won a match, with two losses out of two matches, only 1 goal scored and 11 goals conceded. Their former head coach David Wagner left the club during last week as Manuel Baum stepped in to be their new coach. However, it remains to be seen whether he can turn things around in the club.

Meanwhile, RB Leipzig are more than satisfied with their head coach Julian Nagelsmann. With him, they won and draw one game and were eighth as they welcomed Schalke on Saturday evening.

This tactical analysis will examine how RB Leipzig were able to claim this victory through the smart tactical moves of Nagelsmann. This analysis will also show how Baum set up the tactics for his team in his first match as the new Schalke coach. 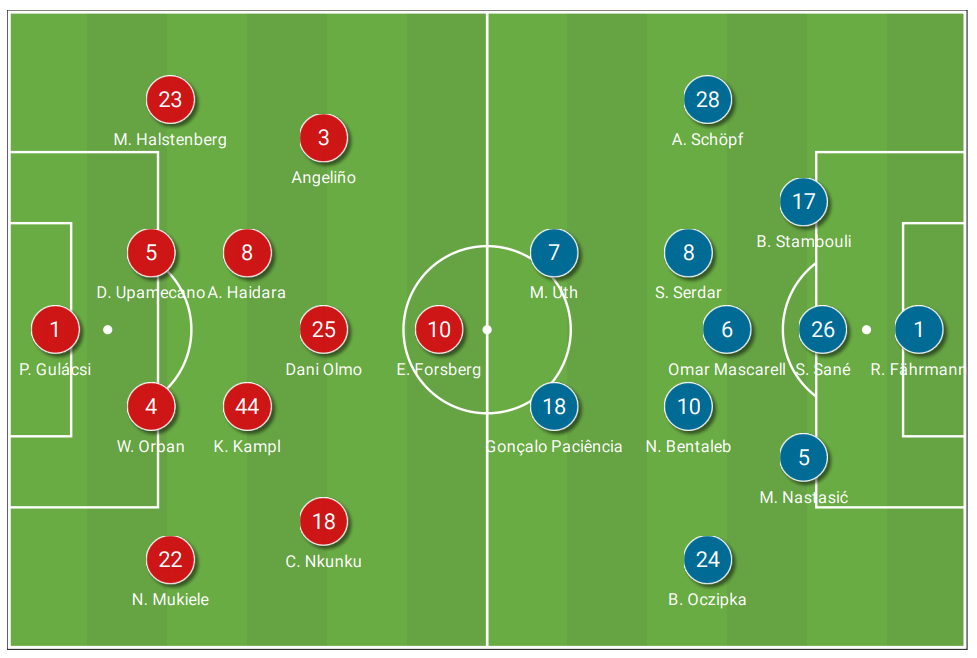 Nagelsmann lined up his team with Willi Orban, Marcel Halstenberg, and Christopher Nkunku to replace Lukas Klostermann, Tyler Adams, and Yussuf Poulsen. As a consequence, Leipzig played without a nominal striker.

Baum made four changes ahead of the match as Salif Sané, Matija Nastasić, Suat Serdar, and Alessandro Schöpf all came in for Sebastian Rudy, Ozan Kabak, Benito Raman, and Nassim Boujellab. While Wagner played with a 4-2-3-1 system, Baum started the match with a 5-3-2 (3-5-2) formation.

In the beginning, Schalke tried to show a reaction to their bad matches in the last weeks. The attacking line pressed high up the field to intercept the build-up play of Leipzig in the early stages of the match. However, they did not press with their whole team as the midfield and defensive lines did not push high enough. That is why there were pockets of space between Schalke´s lines and RB Leipzig did not have big problems to overplay the first pressing line of Schalke.

Kevin Kampl, who played as a defensive lying playmaker, had lots of space to receive the ball and turn to initiate an attack quite often. 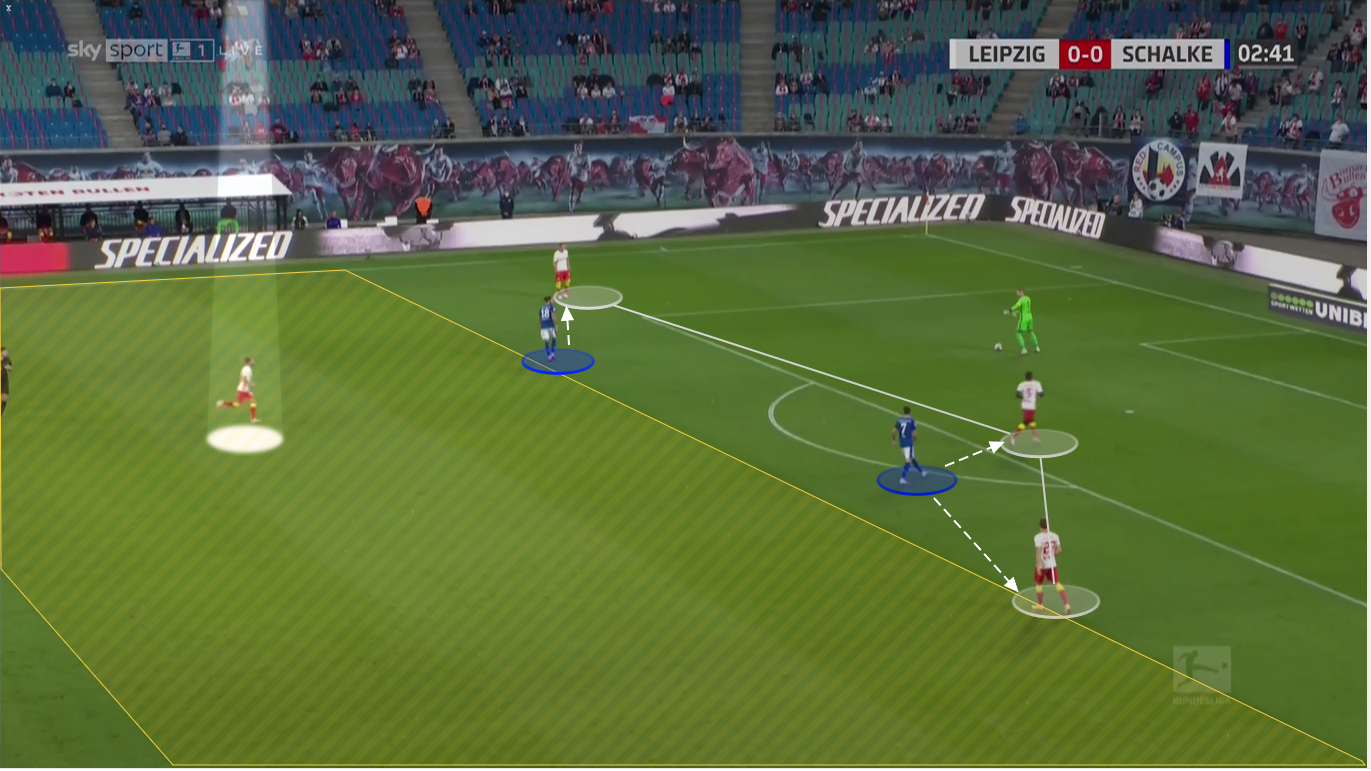 Even at goal-kicks, Schalke stayed high and pressed at Leipzig´s box to start a transition directly in front of Leipzig’s goal. As already mentioned, the attacking line did not get enough support by the rest of the team so that Schalke could overplay this first pressing line easily.

However, Schalke did not leave much space in central areas. Even if their midfield line did not press high enough, they made a good job by tightening up the space in midfield, meaning Leipzig struggled to get into dangerous zones like zone 14 right in front of Schalke´s box. 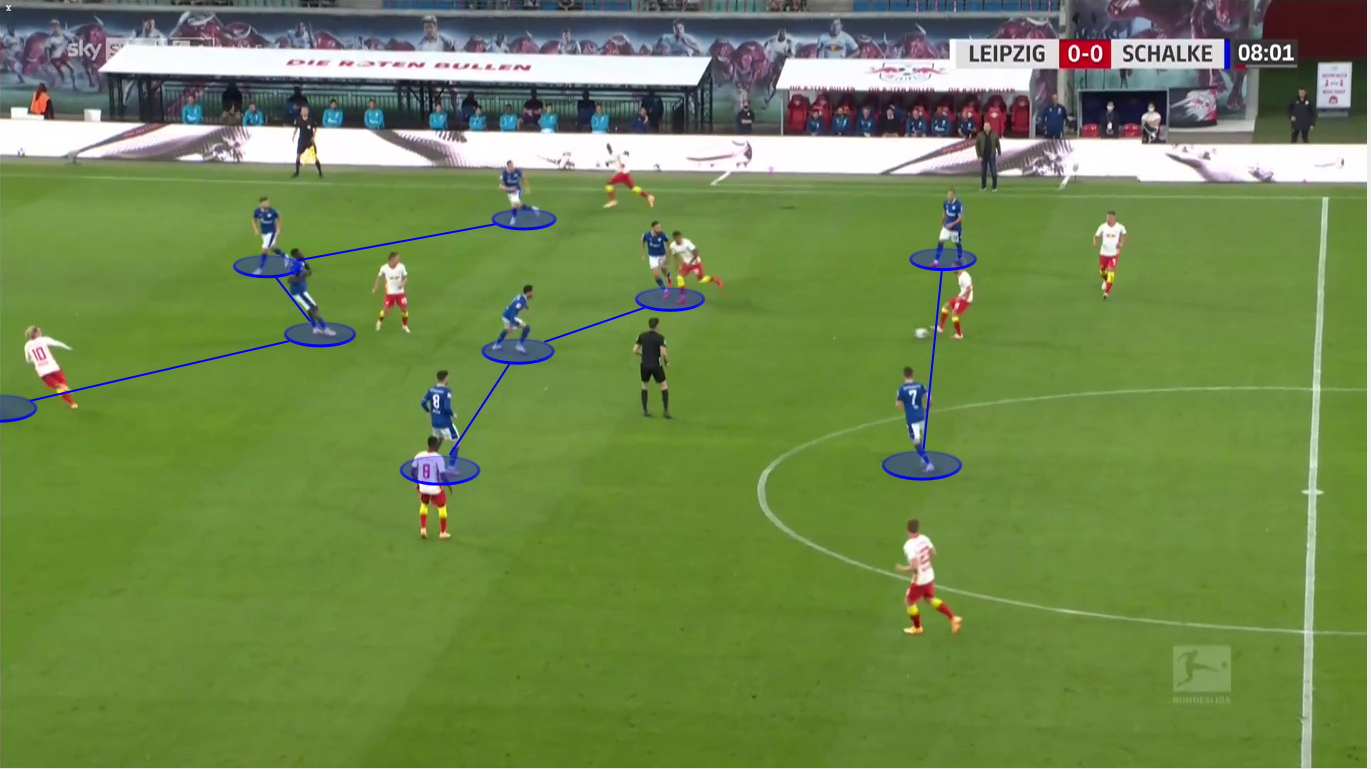 In this early stage of the match, Schalke and Leipzig neutralised themselves in midfield as both teams lost the ball quite often.

Angeliño as a key player

After the first ten minutes, Nagelsmann recognises the struggle of his team and made a crucial and tactical change. From this on, Angeliño (number 3) played high up on the pitch as he left his position as left wing-back to play as a left-winger. 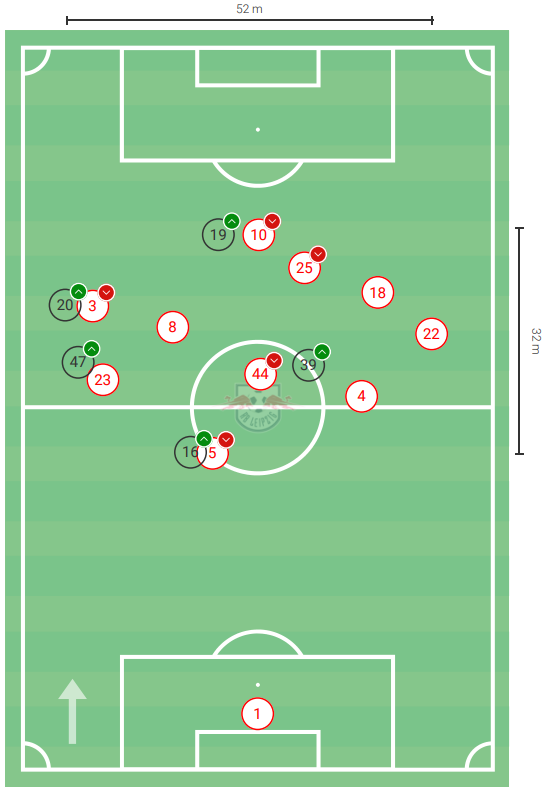 Since Schalke did a good job in closing the central areas, Nagelsmann wanted his team to play long diagonal passes to the left wing where Angeliño stayed wide. This tactical move was the game changer with Angeliño as the key player in a balanced starting phase of the match as they stretched the pitch instead of trying to play through the middle all the time. 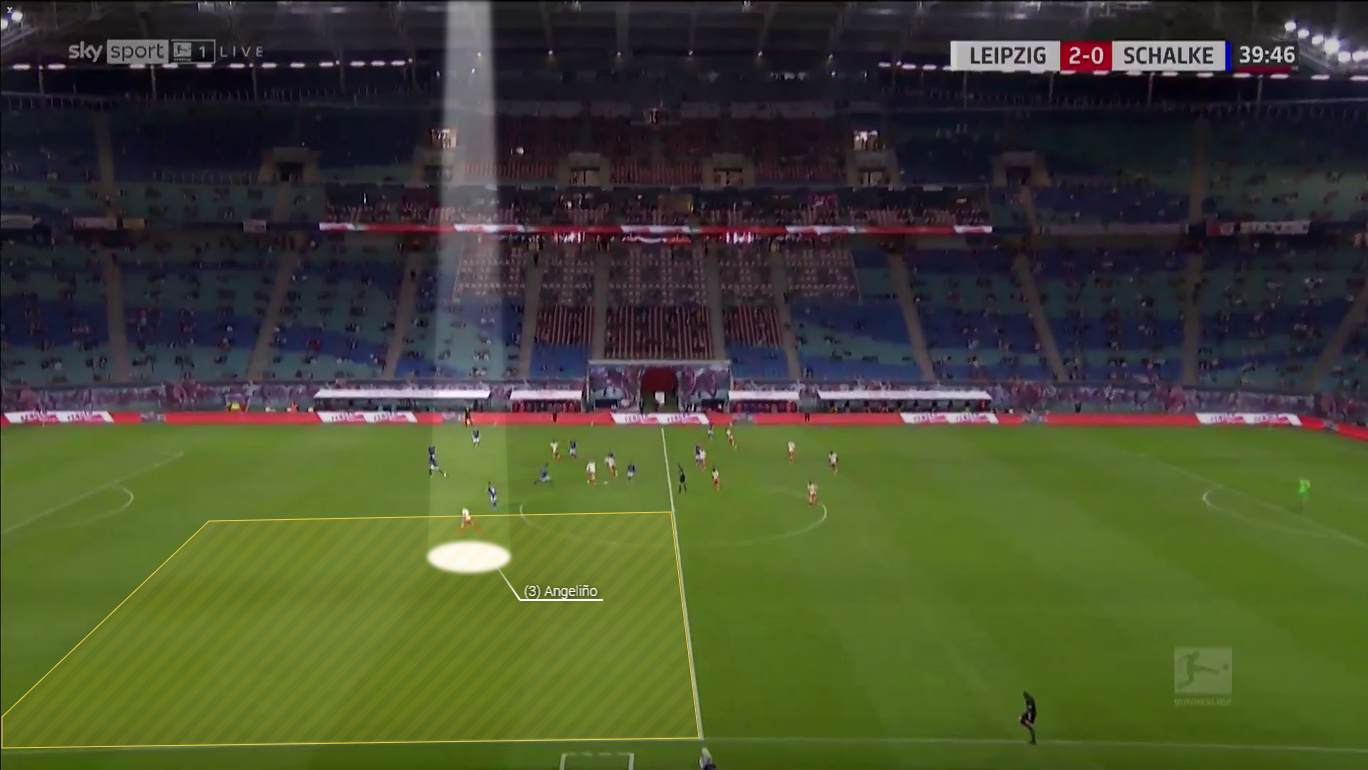 Even ahead of Leipzig´s 2-0, Angeliño had too much space within the box. After a good cross from the right wing, he had no problem to score the second goal of the match. 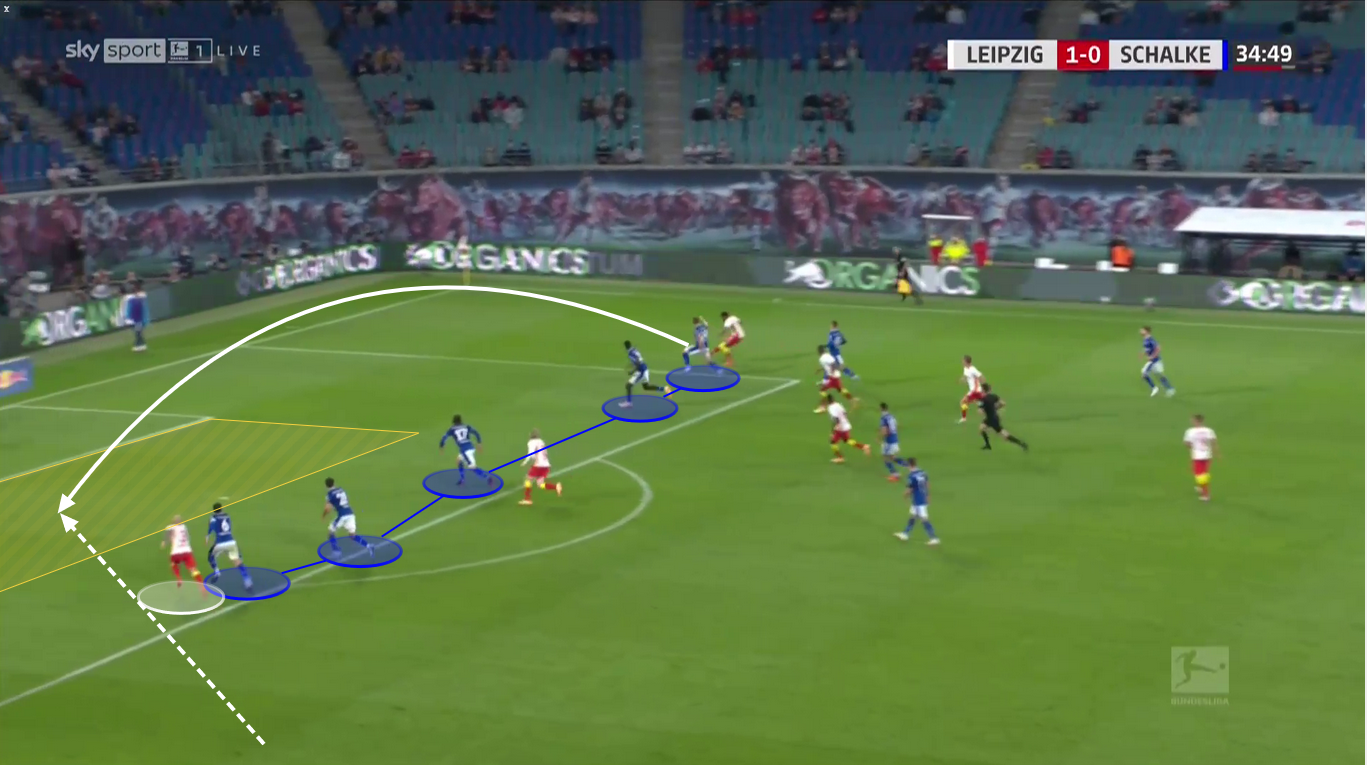 Adding to that, Schalke were forced to replace their central midfielder Suat Serdar because of an injury, so Baum brought in Can Bozdogan who is a left midfielder. Therefore, Schalke changed their formation from a 5-3-2 into a 5-4-1 system with Mark Uth as the right midfielder. As a result, they lost their compactness in the central areas on the pitch.

In the image below, you can see that Leipzig’s creative playmakers Forsberg, Olmo, and Kampl had too much space in between the lines. Adding to that, there was lots of space for Leipzig´s full-backs and wingers. It was very clear that Schalke lost their compactness by switching the sytsem to a 5-4-1 formation. 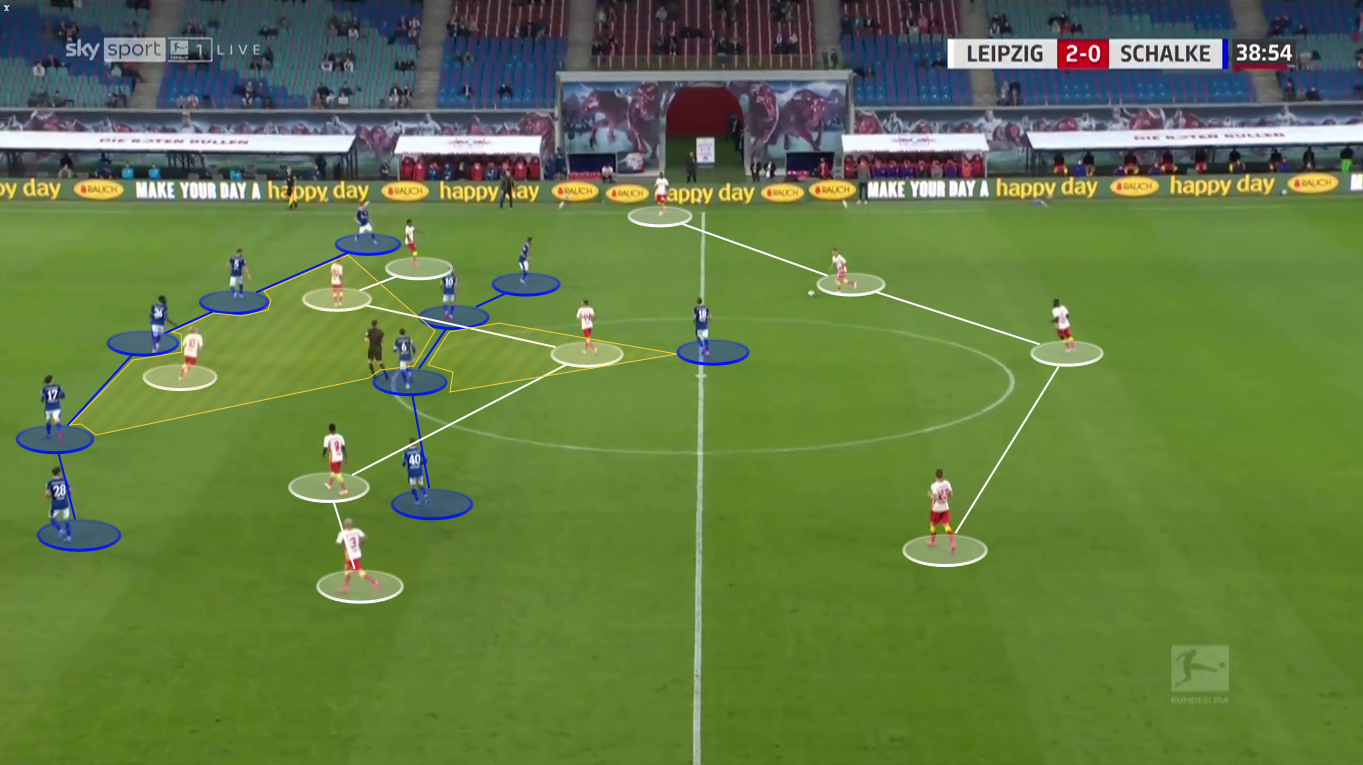 By scoring the 1-0, Leipzig pressed high and even better than Schalke. After recovering the ball, they used the space in the center as Schalke´s midfield were not compact and their defensive line had issues in holding a constant back-line because of bad communication. As you can see in the following image, Sané let himself be pulled out from the back-line because Schalke´s midfielders left a big space in the central area on the pitch. 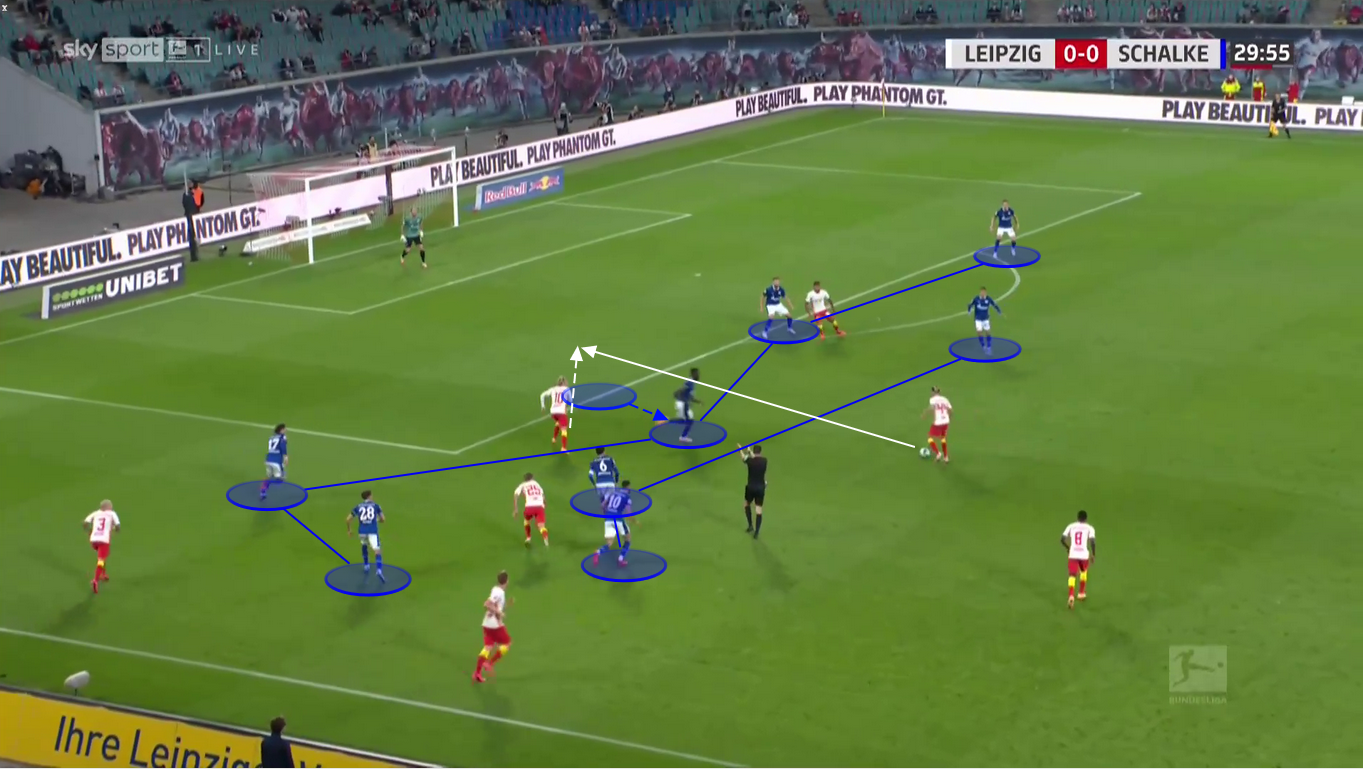 The same problems of communication were to be seen in the situation ahead of the 3-0. Six Schalke players were in the box defending against three Leipzig players. Nevertheless, Orban was able to head the ball in the back of the net to score a goal just before the half-time whistle as Schalke´s defenders left too much space between them directly in front of their goal. 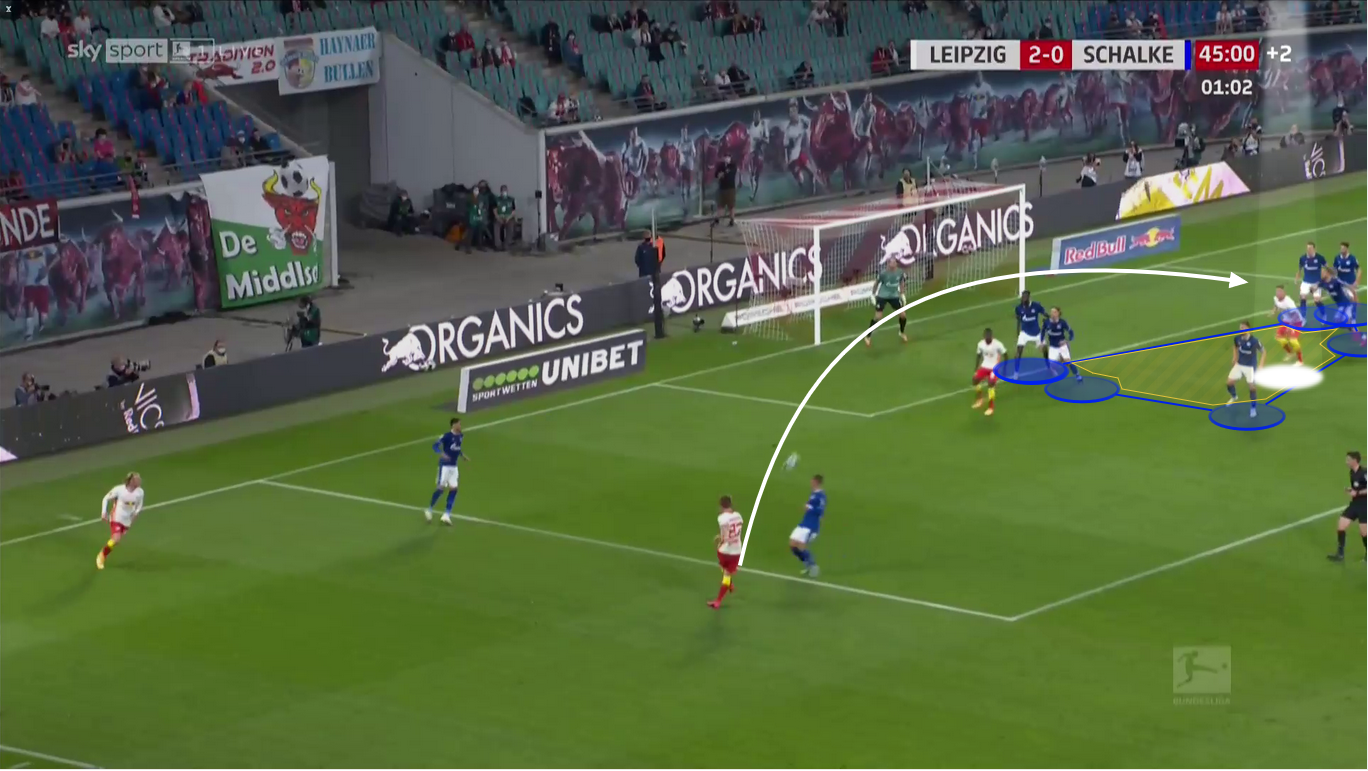 Schalke tried to start good into the match but because of the injury and the tactical move of Nagelsmann, they had no chance to beat Leipzig. After 10 minutes, Leipzig dominated the match having a pass accuracy of 90%. Their combination plays were just too quick for Schalke to intercept. 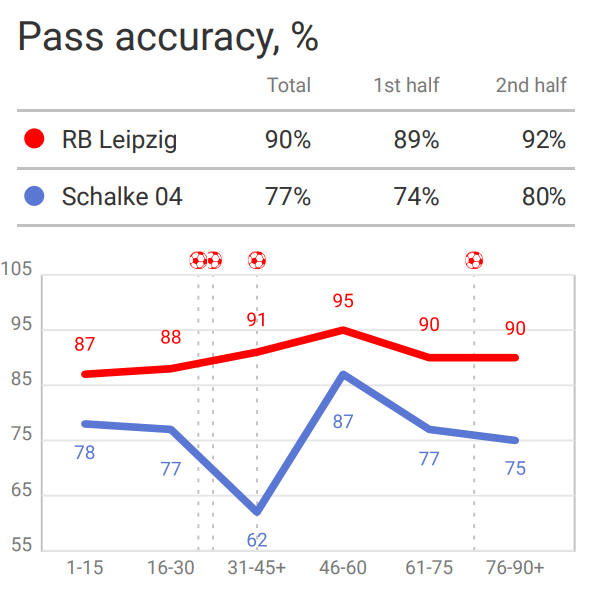 Schalke were too harmless in their offensive actions. They lacked a good combination play due to Leipzig´s well-known pressing high up on the pitch and had massive communication problems. In the end, they were lucky to not concede even more goals as Leipzig played very well and created lots of chances.

For Baum, there is lots of work to be done and it is still questionable why Schalke brought him in ahead of this match instead ahead of the international break. For Leipzig, it was an expected victory and a job well done.