In the second Bundesliga match week, Borussia Mönchengladbach welcomed Union Berlin to Borussia-Park as Gladbach were looking to bounce back after last week’s defeat against Borussia Dortmund. After taking the lead off of an excellent header by Marcus Thuram, Gladbach let Union back into the match, allowing Union to equalise with a Nico Schlotterbeck header off of a corner kick of their own. 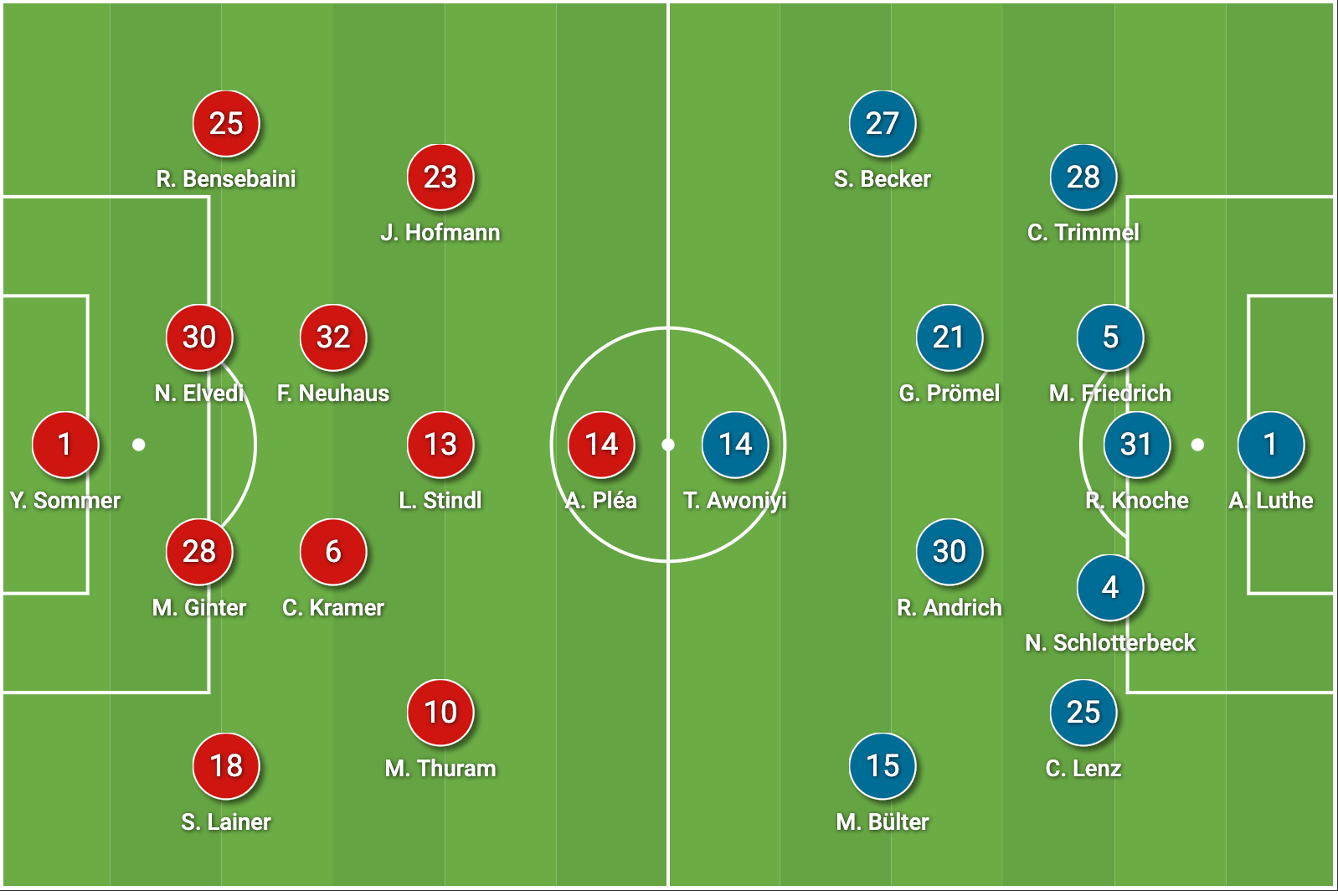 Marco Rose sent Gladbach out in a 4-2-3-1 with Yann Sommer in goal. Matthias Ginter and Nico Elvedi started as Gladbach’s centre-back pairing with Ramy Bensebaini as the left-back and Konrad Laimer as the right-back. Christoph Kramer and Florian Neuhaus operated as the defensive midfield pairing with Lars Stindl, Jonas Hofmann, and Marcus Thuram in front of them. Alassane Pléa started as Gladbach’s striker.

Urs Fischer opted for a 5-4-1 formation with Andreas Luthe in goal. Christopher Lenz started at left wing-back while Christopher Trimmel started as the right wing-back. Nico Schlotterbeck, Robin Knoche, and Marvin Friedrich started the match as the three centre-backs for Union. Grischa Prömel and Robert Andrich were the two central midfielders while Marius Bülter provided width on the left and Sheraldo Becker did the same on the right. Taiwo Awoniyi was the lone striker at the start of the match.

Gladbach’s midfield’s manipulation of space and the opponent

Gladbach started the match off seeing much of the possession and forcing Union back into their defensive shape. In order to beat Union’s first line of pressure, Gladbach looked to manipulate their opponent with the positioning and movement of their two defensive midfielders. Their positioning relative to one another became incredibly important as they attempted to manipulate the first line of defence. 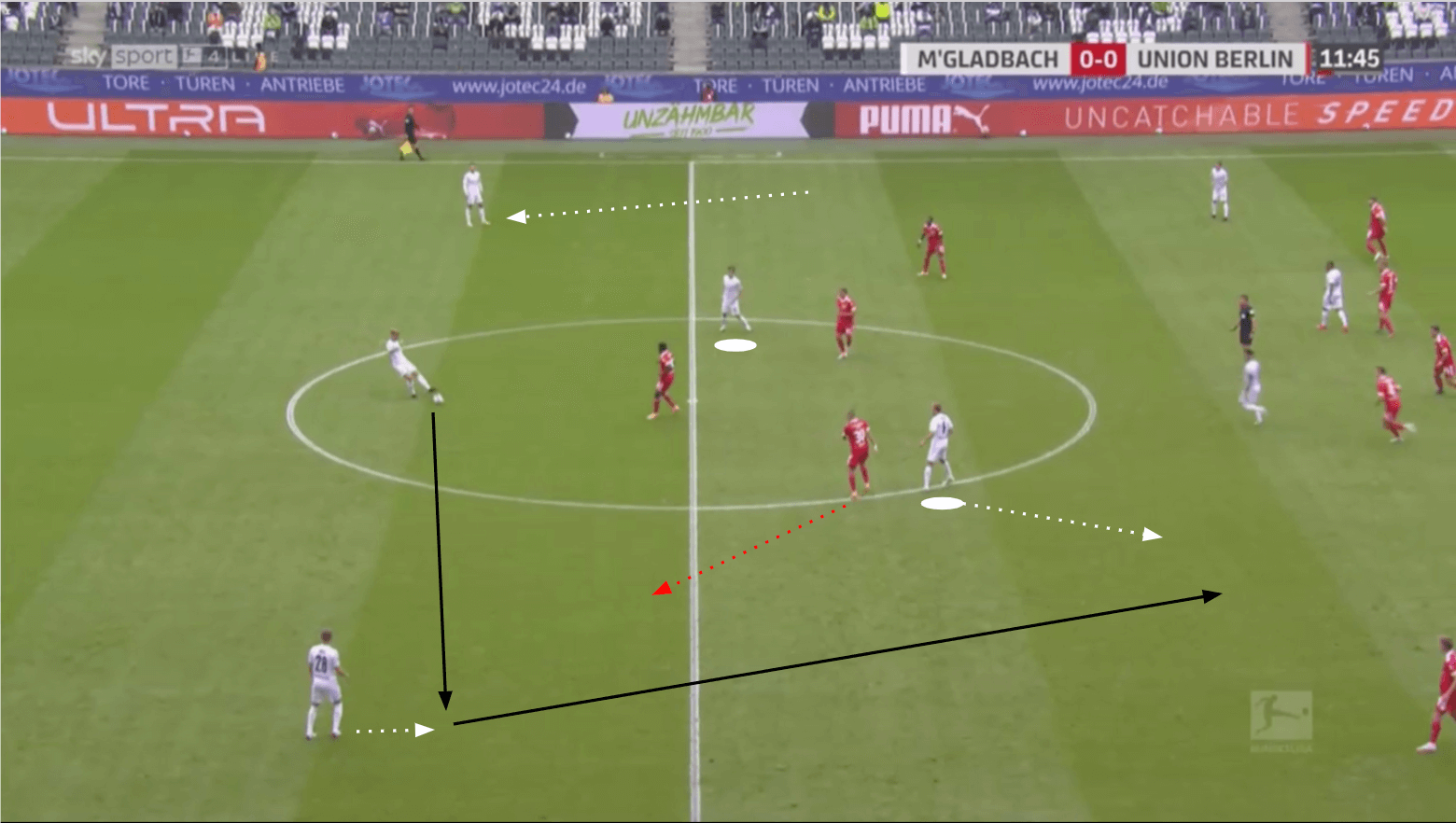 Above, Gladbach formed a back-three by having Bensebaini drop into the space on the left side of the pitch. When he did, this allowed Elvedi and Ginter to slide over and stretch Union’s line of defence. Most importantly, they did this without sacrificing a defensive midfielder, allowing them to manipulate and play through the centre of the pitch. As the ball was played wide to Ginter, Kramer could adjust his runs based on the movement of the defender in front of him.

In the instance above, he looked to release and get in behind the first defensive line of pressure. Kramer and Neuhaus’ positioning relative to one another is also important. Throughout the match, both players looked to ensure that they were not on the same horizontal line as one another. This allows for them to manipulate defenders with their movements (by going behind them or creating space by dragging them either higher or lower up the pitch) while also creating more passing lanes into the space between the lines. 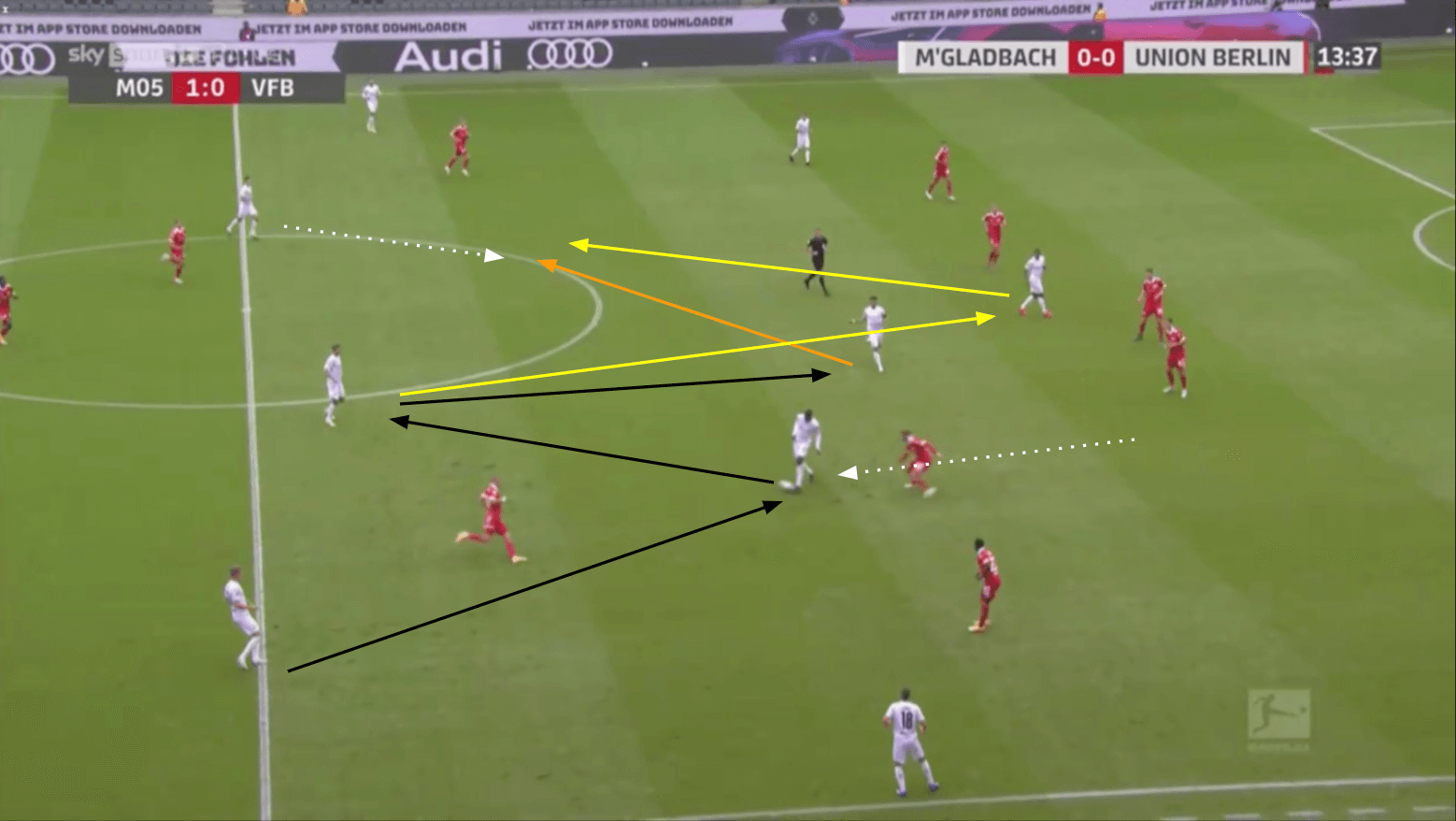 Gladbach also used their defensive midfielders as third men who would be in the best position to progress the ball forward. Oftentimes, players would check back to receive a pass when the makeshift back-three were in possession. These players almost never looked to turn with the ball, but rather to be able to play either Kramer or Neuhaus with their first touch. This is shown above when Thuram dropped and immediately passed to Kramer. We can see Kramer had a lot of time to pick out his next pass, which could open up options for Gladbach in the process. While coaches will often insist on playing the farthest vertical pass, Kramer did not in this instance.

However the options available are quite clear: when Stindl received the ball, he had multiple passing options, including the other defensive midfielder which would be the orange option. If Kramer had played into Pléa, he also could have completed another third man pass to Neuhaus (yellow option), which would have put him in a very dangerous position. In this instance, Gladbach kept the ball on the right side of the pitch, allowing Union to recover and properly defend. 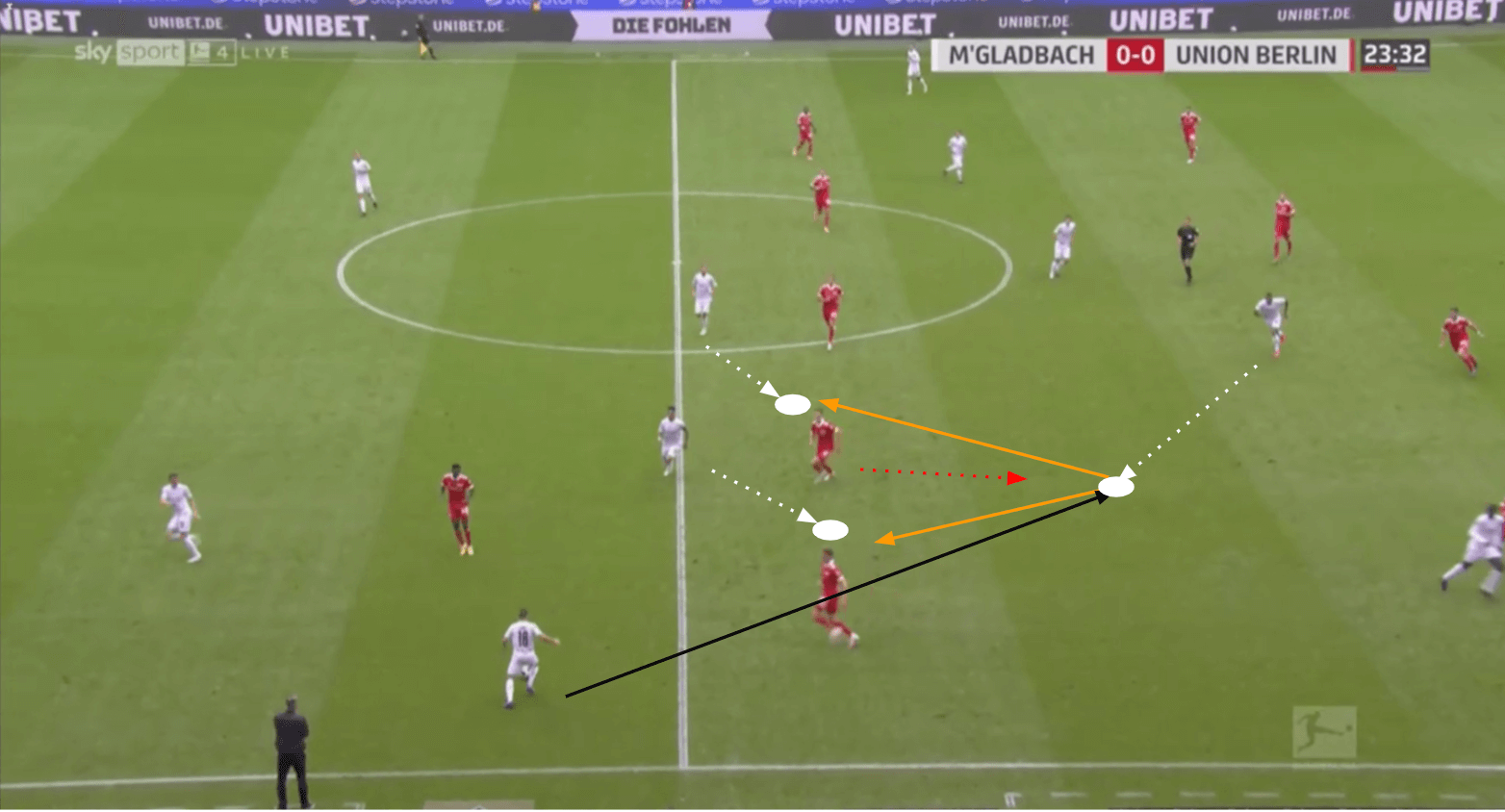 The two defensive midfielder’s positioning also required Union’s first line of defence to step up a bit in order to properly mark them. This created greater space between the lines for Gladbach to occupy. In the image above, Gladbach have five players in between those two lines, which gave passers of the ball multiple options to play into. When the pass would go in, Neuhaus and Kramer would look to provide angles of support, essentially providing two ‘third men’ options in the process. From there, both Neuhaus and Kramer can find the other options available in between the lines while attracting pressure from the defence in the process. This ensures their teammates have a little bit more time to receive the ball and progress forward accordingly.

Union look to move quickly on the counter

For the majority of the match, Union looked to counter-attack. They were able to create chances because of Gladbach’s willingness to counterpress after losing the ball. If they could break through the initial pressure, Union often had an open man in possession who could look to move forward quickly and exploit space. 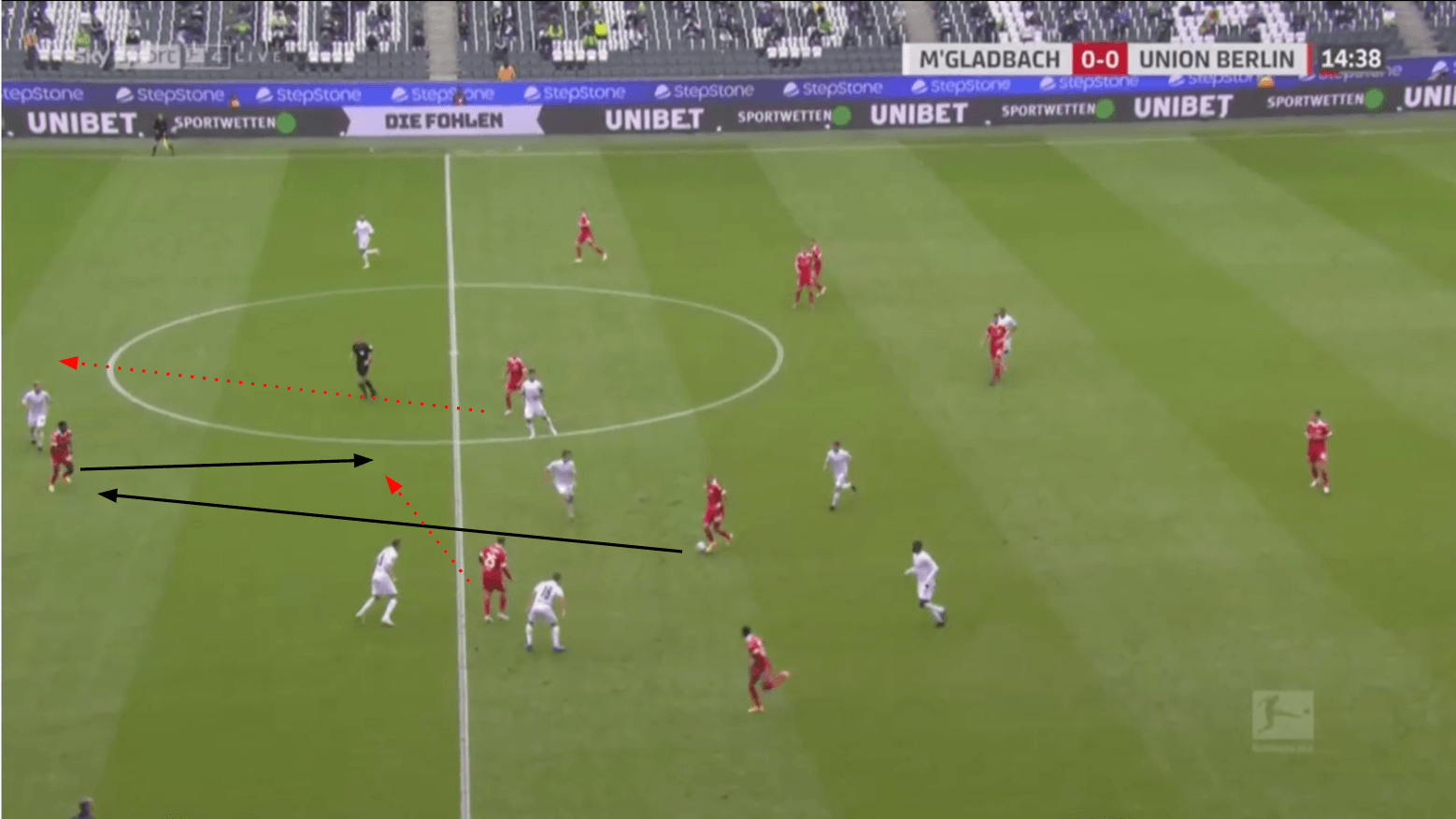 This first image highlights exactly that. Gladbach looked to put Union under immense pressure, with five Gladbach players surrounding three Union players. Andrich was on the ball as the Gladbach players collapsed on him. Andrich did well to recognise that Gladbach hadn’t closed off the vertical passing lane, and he found Awoniyi who was followed by Elvedi. Elvedi’s decision to do so opened up a large amount of space for Grischa Prömel to run into. Unfortunately for Prömel, the pass into him wasn’t played with enough pace, so Gladbach’s defence had time to recover and organise before Union could take full advantage of the space. While Lenz would have liked to have that pass back, his ability to be the open third man meant that he had the time available to find a target. 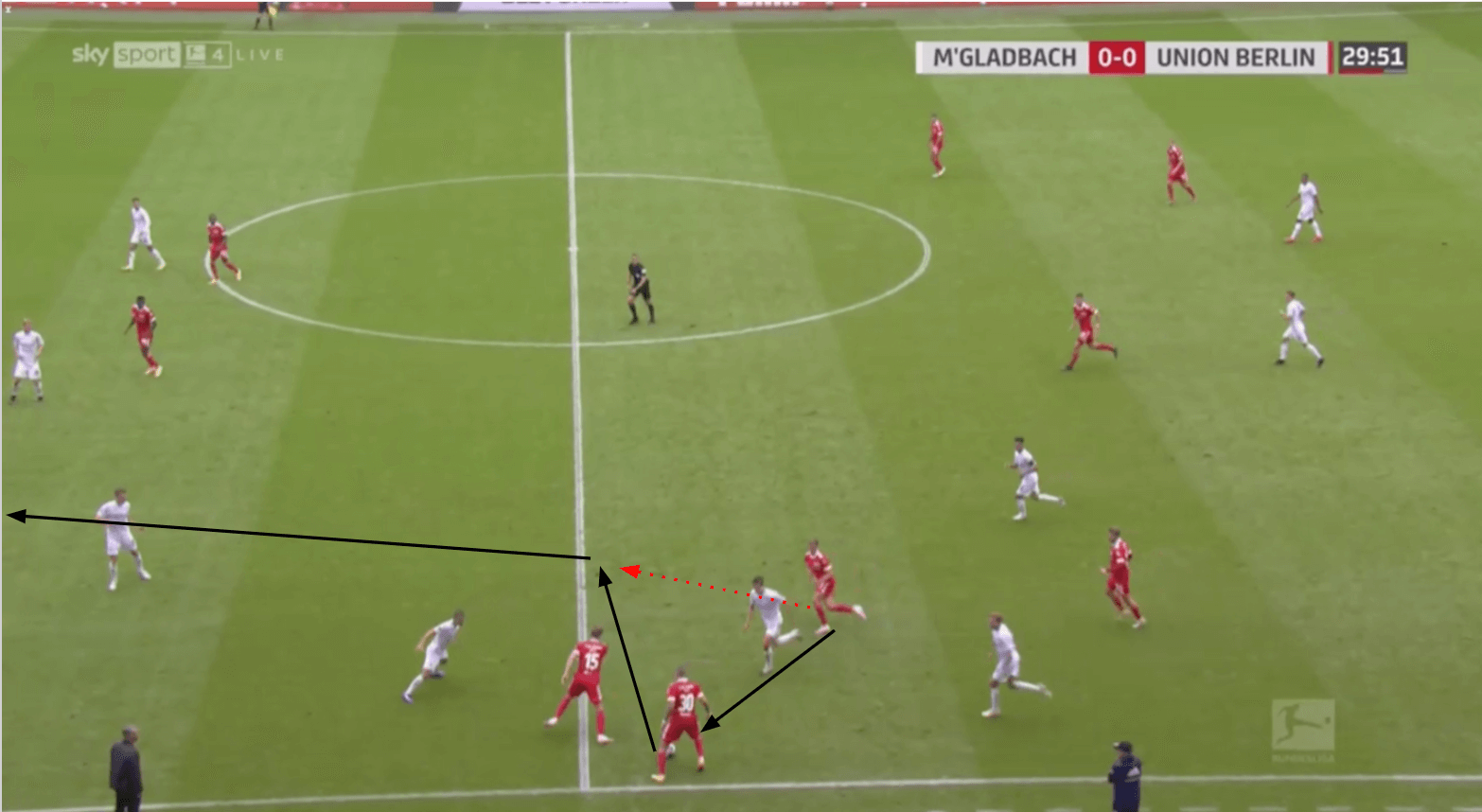 In the instance above, this is less about Gladbach’s pressing and more about Union attracting pressure with some quick passing. After building up down the left side, a large amount of space was exposed for Union to exploit. Prömel created even more space for himself by playing a quick wall pass with Andrich. This drew the attention of the Gladbach defender, allowing Prömel to receive the ball in space behind the defender. Prömel took his first touch into space and then delivered a vertical pass into space, which saw Awoniyi in a 1 v 1 situation. Ultimately Awoniyi switched the field, allowing a cross to come into the feet of Becker, who rattled the bar with his shot. While Union were unlucky not to score, they continued to threaten Gladbach by playing quickly on the counter.

Much of Gladbach’s success came because Union were unwilling to press them higher up the pitch. For the majority of the match, Union looked to observe pressure and hit Gladbach on the counter. This changed once Marcus Thuram put Gladbach ahead off of a corner. Union had to chase the match a bit more, and they did so by pressing Gladbach in what appeared to be a man-to-man press. 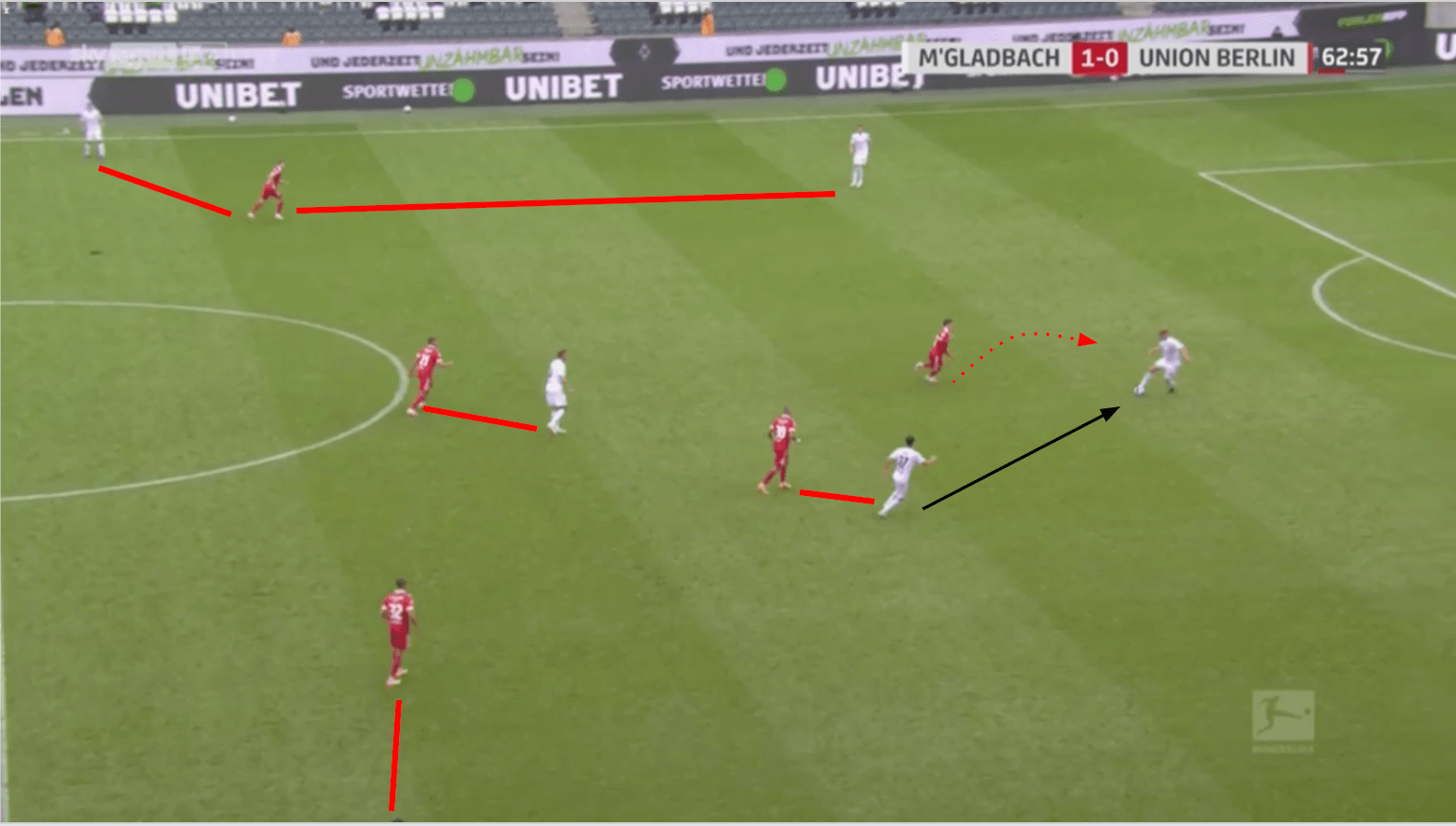 This man-to-man pressure near the ball overwhelmed Gladbach, as almost all passing options for the man on the ball were covered tightly by the Union press. As the ball went backwards, Max Kruse looked to pressure while curving his run in order to prevent Gladbach from finding the man in space. Off the ball, Union’s Marius Bülter was positioned between two players. While he wasn’t able to provide immediate pressure on Ginter, his positioning prevented Gladbach from being able to switch the ball quickly and get out of pressure. 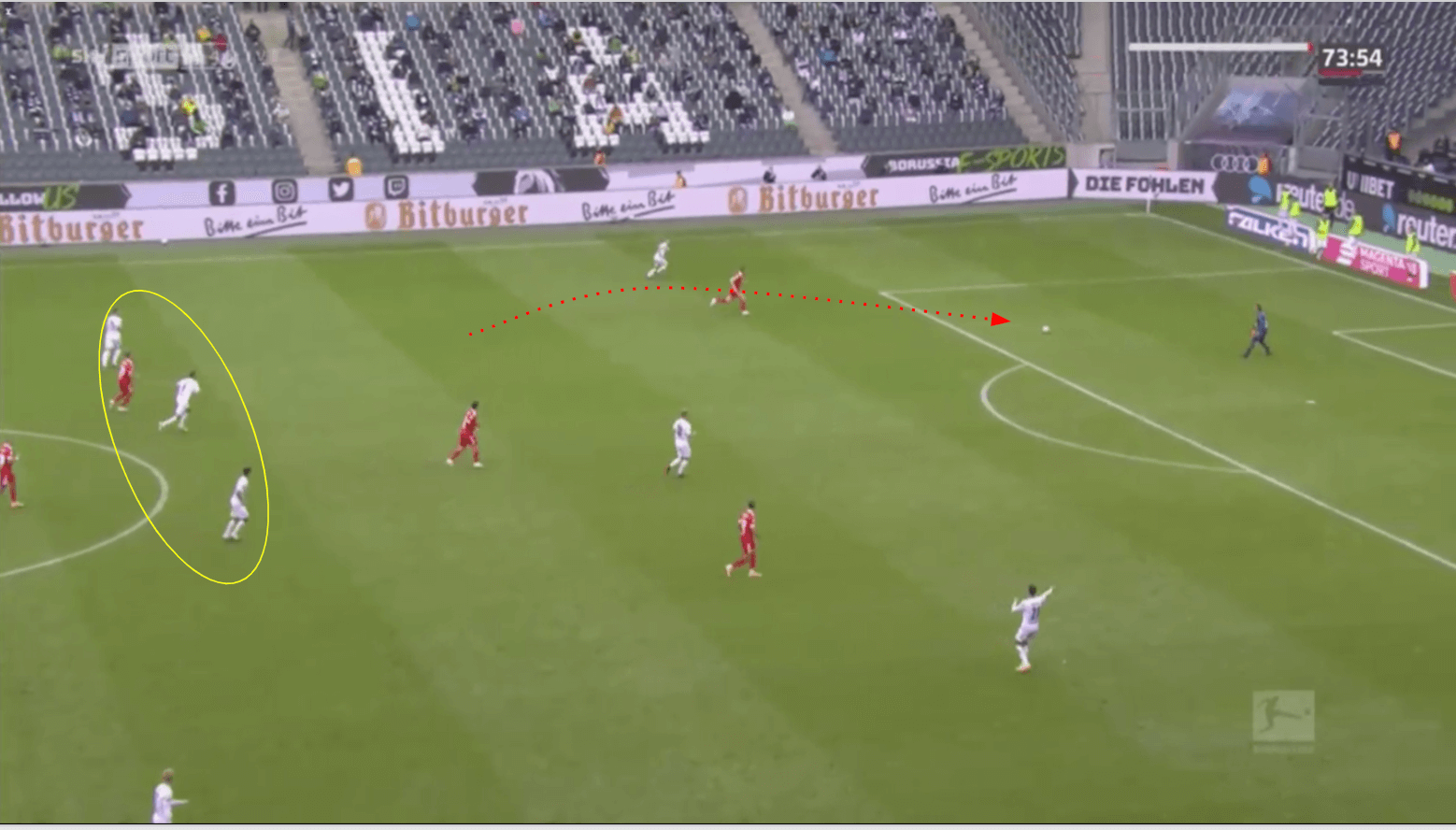 Gladbach didn’t do themselves any favours with their positioning, but Union also took advantage of this to continue to have Sommer send the ball long, with the hope of them ultimately winning aerial battles to regain possession. In the image above, Gladbach don’t really have any width available for Sommer. They did have players dropping centrally, but those players were too compact, which allowed Union to mark three players with two of their own. This advantage in the midfield, combined with the pressure and curved run from Andrich, forced Sommer into playing a long ball that quickly became an aerial duel. 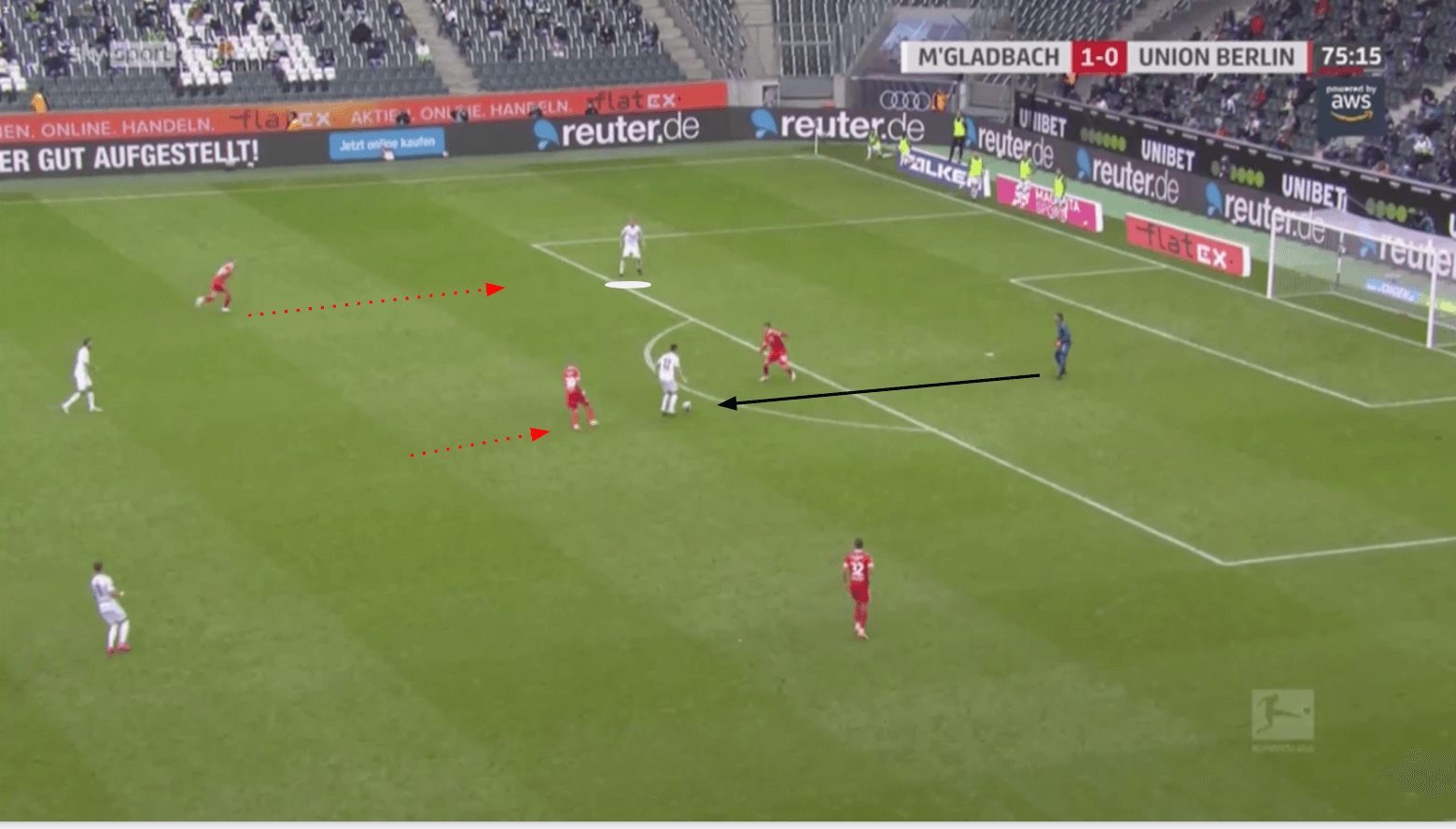 Even when Gladbach tried to regain possession and reset, Union’s press continued to frustrate them. Prior to the image above, Gladbach had been entering the middle third of the pitch, looking to progress forward. After a back pass from the wide area, Union pressed in unison, creating an obvious numerical advantage high up the pitch. While having the numerical advantage, Gladbach still had the opportunity to play the third man (Elvedi), highlighted above in white. He had enough time and space to be able to find a target, but Neuhaus opted instead to dribble. This led to him being put under more pressure with his only option ultimately being to play it back to Sommer, who again had to send the ball long.

Union’s constant pressure allowed them to see much more of the ball than they had previously in the match. With their quick passing in possession, they were able to get forward more and put Gladbach under pressure. This ultimately led to them winning themselves a corner in the 80th minute, from which they equalised and secured themselves a point in the process.

Gladbach will likely be frustrated with the result after dominating much of the match, but Union ultimately did enough to earn themselves a point. Luckily for Gladbach, who will be looking to challenge for the top spot in the league, Bayern Munich ended up losing on Sunday, preventing what many thought would be the beginning of a large gap at the top of the league. Gladbach will look to secure their first Bundesliga victory of the season next weekend against 1. FC Köln whilst Union Berlin look to do the same against Mainz on Friday.