After beating Villarreal comfortably, Barcelona travelled to face a Celta Vigo side who have had a positive start to the season too. With Real Madrid having secured another win only 24 hours before, the pressure was on Barcelona not to slip behind them in the running.

Ansu Fati opened the scoring early on for Barcelona with a fine finish, though Clement Lenglet’s dismissal for a second yellow card on the stroke of half-time changed the game for Barcelona. It didn’t affect them though, as a Lucas Olaza own goal and an injury-time third from Sergi Roberto sealed a 3-0 victory.

This tactical analysis will consider the tactics of both Celta Vigo and Barcelona. The analysis will look at how Ronald Koeman outsmarted Óscar García in a tactical battle to come out with the three points to keep up Barcelona’s strong start to the La Liga season. 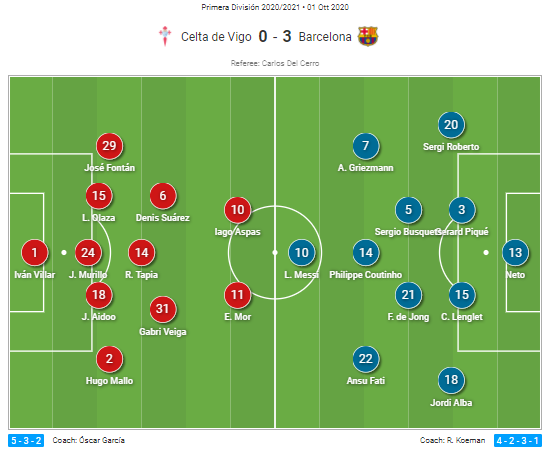 García changed the shape of Celta Vigo, dropping Nolito from midfield to add in another defender as José Fontán came in to create a back five, with Olaza moving into a central position. Equally, Fran Beltrán was left out with Gabri Viega preferred for his defensive solidity.

Koeman stuck to his preferred 4-2-3-1 shape with an unchanged line-up from that which overcame Villarreal. Neto continued in goal as Marc-André Ter Stegen is sidelined by injury. The interesting decision was the one which led to Antoine Griezmann being taken off for Ronald Araujo following Lenglet’s decision, being sacrificed ahead of Fati or Philippe Coutinho.

One of the major changes to the Barcelona system this season has been the creation of a double pivot in midfield which has helped to get the best out of both Sergio Busquets and Frenkie de Jong. It is a system which has not been used at Barcelona regularly for a long time, decades in fact, but which Busquets does have experience in having been deployed in such a system with Spain, having played in a double pivot in midfield alongside then Real Madrid player Xabi Alonso. Now, he takes up this role with De Jong in a new-look midfield.

When in possession, we can see how the four offensive players ahead of them tend to drift into central areas together, with false nine Messi dropping deeper while Coutinho and Fati cut inside with Griezmann usually being the one to operate on the shoulder of the last man. This means that the full-back, Sergi Roberto and Jordi Alba, push on in order to provide wide support for Busquets and De Jong to spread the ball out wide to add greater width to the team with the offensive players coming so narrow.

However, following the red card and when out of possession, the midfield would drop into a four-man midfield block. This would allow Busquets and De Jong greater support, with two wide players, usually Coutinho and Fati, dropping in alongside them to support. The pivots would then have the role of blocking off central areas and preventing Celta from playing through the middle, particularly as Iago Aspas dropped deep as will be touched upon later in this analysis.

Having returned from Bayern Munich, Coutinho’s future was unclear but he has made an immediate impact under Koeman. Since the start of the season, he has played regularly in the central attacking midfield role, just behind Messi who plays as a false nine and with Griezmann and Fati either side of him, almost operating in a 4-3-3 only with Coutinho in a more offensive role ahead of a double pivot, rather than two central midfielders roaming ahead of Busquets as a lone pivot.

Defensively, he has been reliable. As touched upon previously, when operating in a wide area and possession is lost, he will drop back into a wide midfielder position and will support the midfield block. This discipline has been key and is what sets him apart from many of the other wide players in the Barcelona squad, using his experience of previously having operated in a deeper role to offer more defensive strength.

Of equal importance, and one of the main changes in his game since his last spell at the club, is how he leads the press. Koeman is clearly keen to have a high press starting from the attacking players, which simply hasn’t existed under Ernesto Valverde or Quique Setién, and Coutinho is at the heart of this. As can be seen here, he will be the man to initiate the press regularly and pushed up from midfield. Even when down to 10 men, he would continue to play that role and his work rate and effort have been a crucial part of Koeman’s tactics.

In attack, he plays another essential role. At times, such as the above example, Celta were guilty of having defenders drawn to Messi who was playing in a central role. This creates space in behind which Coutinho can attack late, making a late run like this one and providing another option for Fati as he looks to cut back from a wide area. Coutinho’s expertise in finishing from distance mean that he is perfect for this role, and on this occasion hit the post with the rebound then being converted, showing a perfect example of what his role is in the team’s offensive game plan.

Celta Vigo fail to capitalise on the space

With a one-man advantage in the second half, Celta Vigo failed to adapt and capitalise. Barcelona were regularly effective in creating a strong defensive set-up in the middle of the field, but it was not always successful. There were moments, particularly after taking a two-goal lead, in which there were spaces available. As Celta transitioned into attack, the lack of a central presence as Messi drifted wide and with one man less removing Coutinho from the equation as he moved to the wide area, there were spaces available in the middle.

This example below shows how such spaces did open up. However, the lack of an offensive-minded midfielder within Celta’s midfield three meant that their transition would often slow or break down when moved into this area. As can be seen here, two midfielders have the chance to pull off and make a progressive run through this central area, but do not do so and leave a substantial space in the middle unexploited while the left flank is overcrowded.

This means that Iago Aspas is forced to drop back into a deeper position to collect the ball. By the time he does so, there is much less space available to operate in, Barcelona’s midfield four have sat back into a block and Celta have removed a striker from the equation. Emre Mor is left isolated in the final line of attack and Aspas can no longer provide as great a threat and has to find his way out of the midfield set-up. Such lack of offensive movement in the midfield in central areas in attacking transitions meant that Barcelona could be comfortable, even while they were a man down compared to the hosts.

This tie was another clear example of how Koeman will look to organise his team to become more firm defensively. This will provide the foundation for a new attacking set-up, supported by a midfield double pivot. It was a well-executed approach which worked well against Celta Vigo, though it must be recognised that the home side did not take advantage of their opportunity following Lenglet’s red card. With a defensive set-up, García did not adapt his team appropriately and their attacking play became disjointed and left players isolated without support from midfield. Barcelona will face much tougher challenges this season, but Koeman and his set-up is giving cause for optimism at Camp Nou.