Celta Vigo invited defending champions Barcelona at Estadio de Balaídos to contest the Matchday 32 of La Liga this week. Barcelona, who did not quite get the re-start that they wanted, needed three points to pressurize league leaders Real Madrid whereas Celta Vigo welcomed the Catalans following two wins in their previous matches. Quique Setién’s side have struggled with their away form this season, whereas Celta Vigo have been exceptional with their home performances, the latest one being 6-0 hammering of Deportivo Alavés.

The sides shared points with a 2-2 scoreline at the final whistle. While Barcelona took the lead twice, Celta Vigo equalized on both occasions to restrict the Blaugrana. In this tactical analysis, we’ll be talking about the line-ups, tactics used by both the sides and how the fixture progressed. Similarly, the analysis will also talk about how Barcelona managed to give away the lead and why Celta Vigo’s counter tactics was spot-on.

With Rubén Blanco infront of the goal, Celta Vigo started with a 5-3-2 formation. Óscar García’s five-man defence consisted of young Jacobo González and Kevin Vázquez as full-backs with Néstor Araujo, Joseph Aidoo, and Jorge Sáenz as the central defenders. The three-man midfield starred former Barcelona man Denis Suárez with Okay Yokuşlu and Brais Méndez. The dynamic duo of loanee Fyodor Smolov and Iago Aspas started out as the forwards. 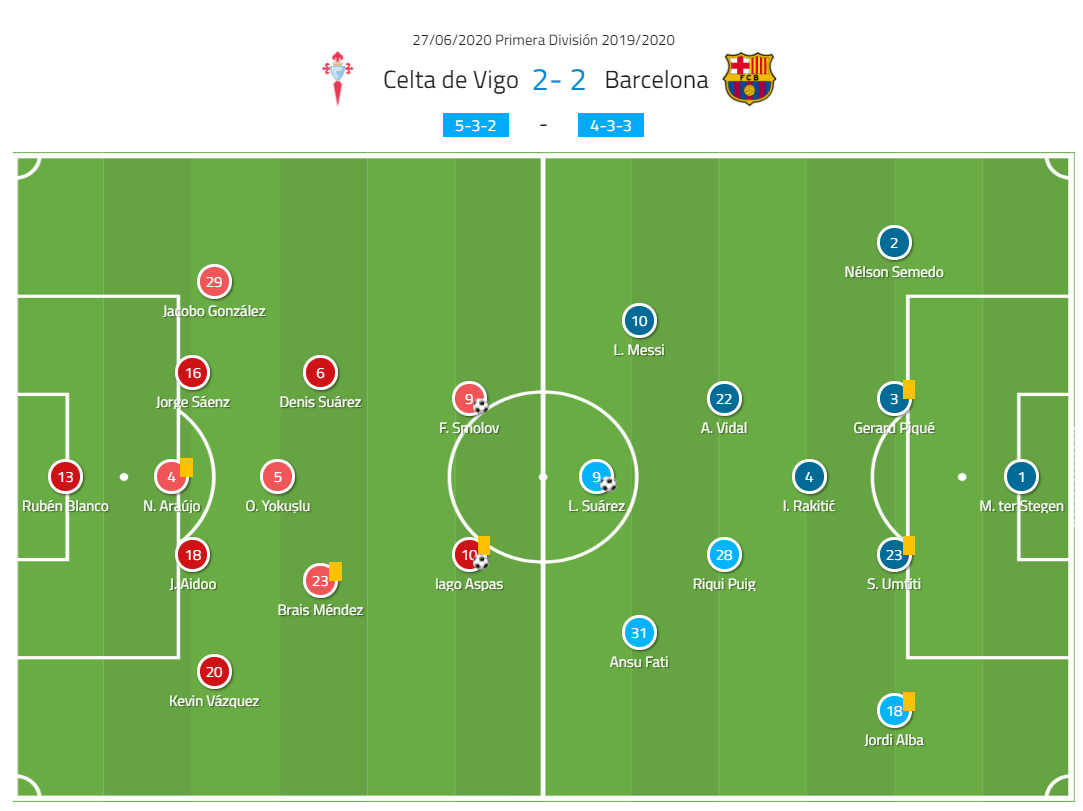 Barcelona made three substitutions to the team that beat Athletic Bilbao. Marc-André ter Stegen started in front of the goal, accompanied by the four-man defence of Nélson Semedo, Gerard Piqué, Samuel Umtiti, and Jordi Alba. Clement Lenglet was rested with Umtiti in the starting line-up. Similarly, the midfield saw Riqui Puig get his first start of the season, replacing Arthur Melo. Similarly, Arturo Vidal retained his place whereas Ivan Rakitić came in for the suspended Sergio Busquets. Ansu Fati replaced Antoine Griezmann at the left-wing position as Luis Suárez and Lionel Messi started to complete the 4-3-3.

Setién made started all three bench players that made an immediate impact in the Bilbao game. With the inclusion of Riqui Puig and Ansu Fati, Barcelona’s attack looked sharp from the beginning, holding up to the ball well and playing through the Celta Vigo defence frequently. In possession, Barcelona maintained a three-man backline with Rakitić covering the central void between Piqué and Umtiti. This helped Barcelona to playout from the back and use Rakitić to supply the ball forward on transition. 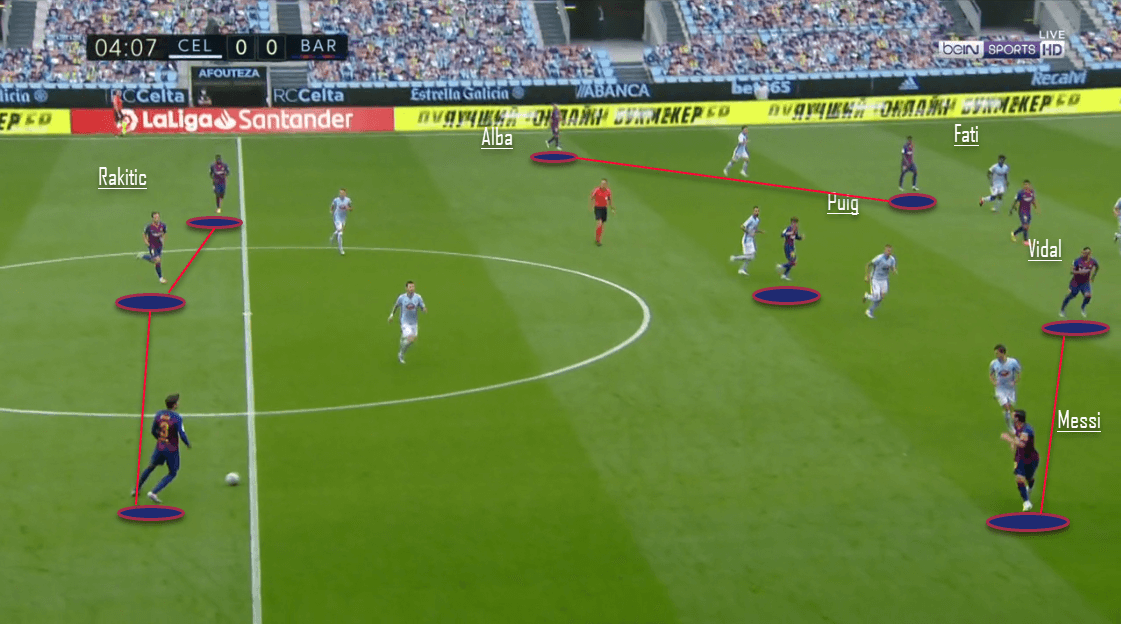 One of the key-characteristics of Barcelona’s movements on possession were the movements between Messi and Vidal, Alba and Fati as well as Riqui Puig’s individual movements. Messi, unlike the Bilbao game, played in a wider right-position, swapping places with Arturo Vidal in frequent terms. Similarly, on the left side of the pitch, Jordi Alba and Ansu Fati’s movements were relative to each other, as overlapping and under-lapping runs were frequently tracked and contemplated by the duo. Puig, starting his first match of the season, worked as the link-up and the controller, as he frequently saw himself with the ball, organizing play and maintaining the flow from Rakitić to an advanced player. Despite starting out in the right, 33-year-old Messi was given the freedom to roam around the pitch and drop deep to link-up with Puig. 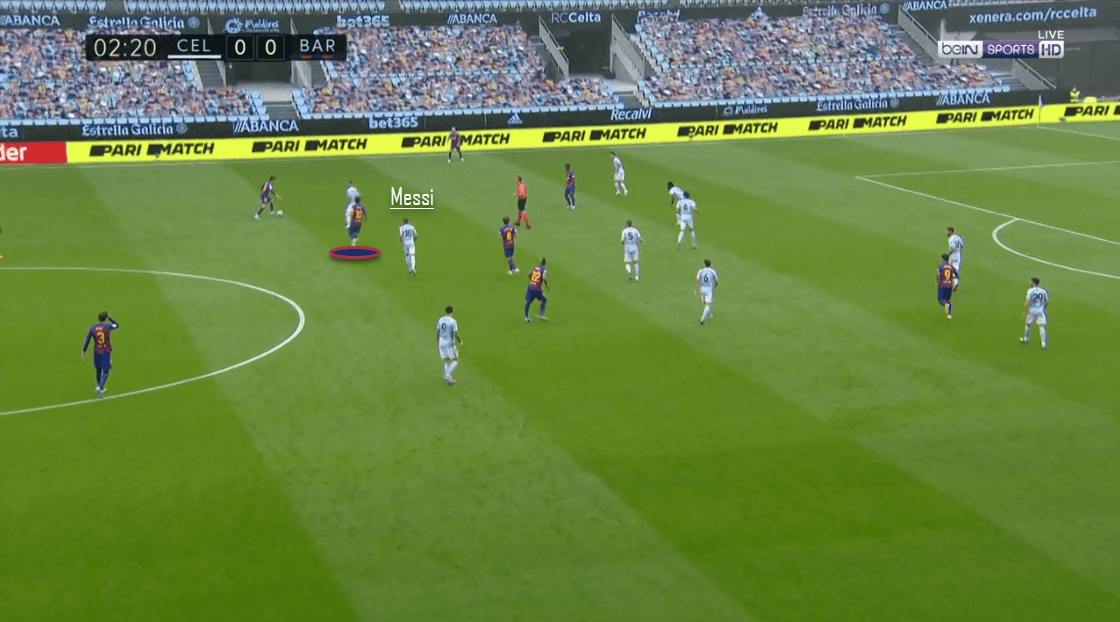 As we can see in the instance above, Messi is seen in the opposite side of the pitch, linking up with the youngster from La Masia. While this made Barcelona’s grip on possession strong, this also allowed Messi to make progressive runs into the box. However, Messi’s recent struggle was visible, as the Argentinian got no shot on target throughout the match. This movement also allowed the forward line to free-up, as Barcelona have recently been troubled by their overcrowded central space. 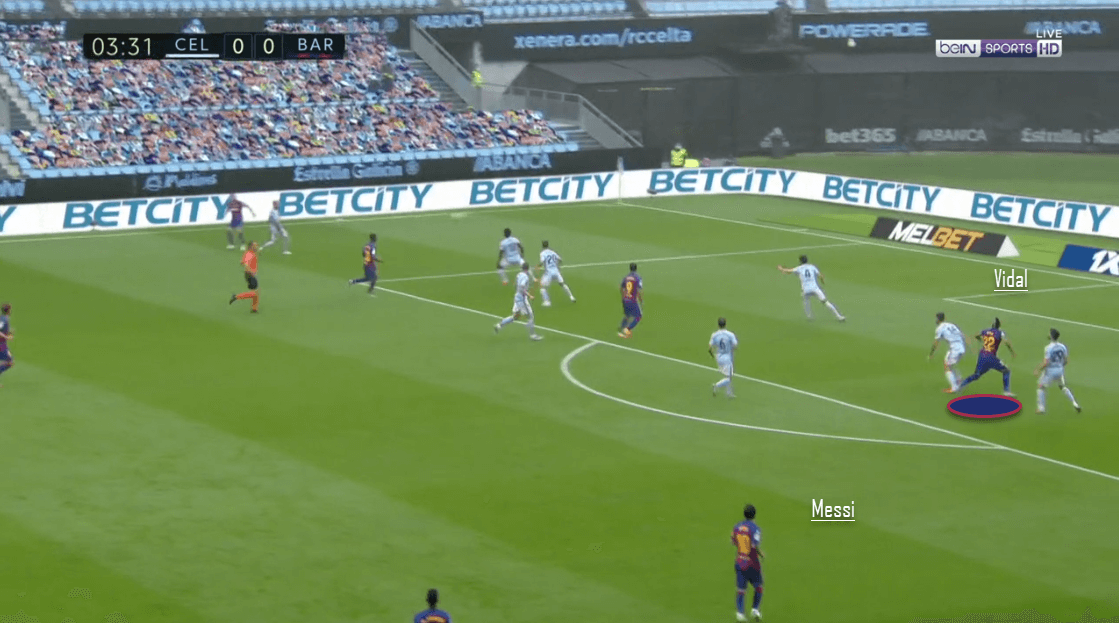 As we’ve already noticed above, Vidal’s presence allows Messi to go deep and make connections as Vidal covers up the final third area in the absence of Messi. A similar scenario is visible when Martin Braithwaite starts alongside Griezmann, as Griezmann is free to go deep and get involved in the link-up in Braithwaite’s presence. Messi’s involvement in the midfield with occasional central runs meant more freedom for wide-playing Semedo, who was seen in the advanced right position of the pitch, trying to set balls for both Vidal and Suarez. 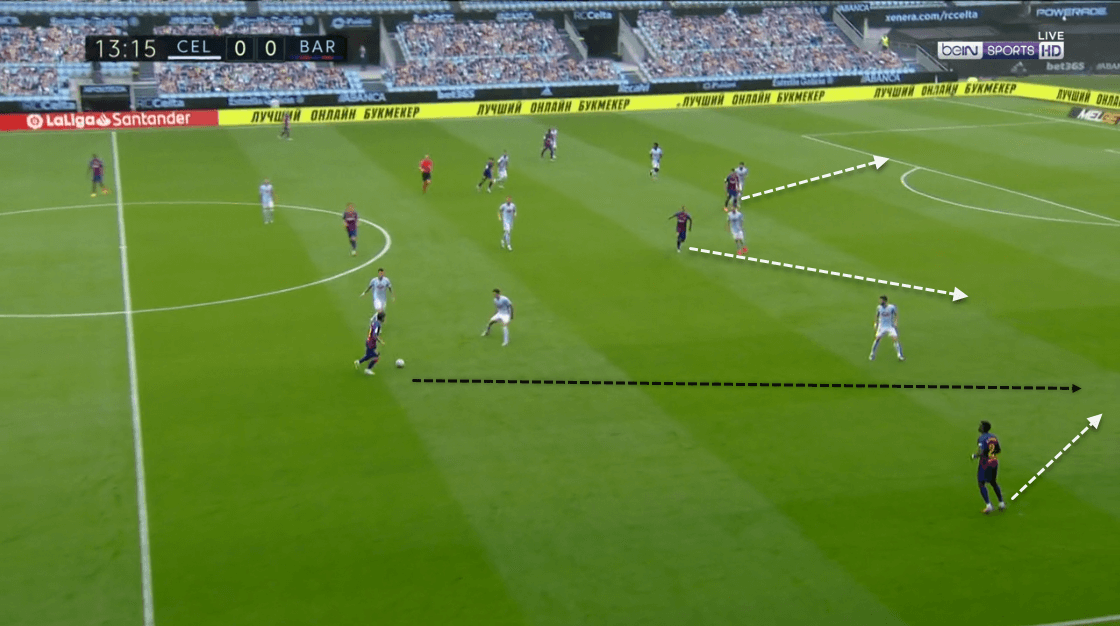 However, Barcelona again struggled to find a proper synchrony in the final third, as none of their goals came from tactical build-up and movements. The first goal came-off Suarez’s head following Messi’s genius and the second goal was an instinctive finish from the Uruguayan. Fati provided the much-needed width to the side, using his pace to penetrate defence from the left side. However, Barcelona’s problems became apparent after Ansu Fati was subbed off, as they were unable to transition quickly to exploit Celta Vigo’s defence and win the game. 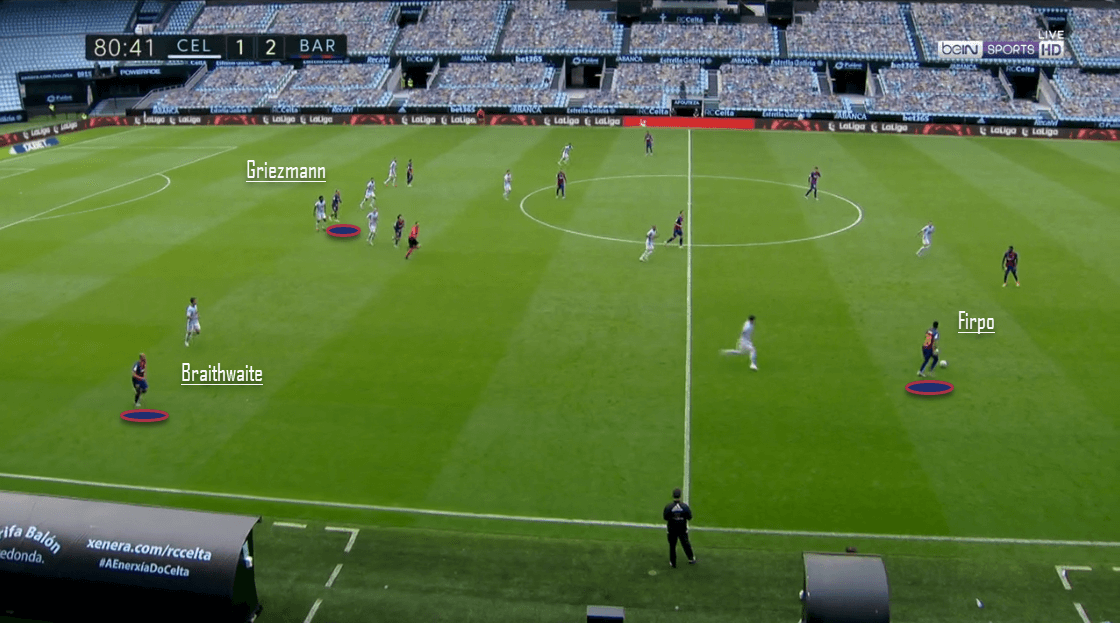 With Braithwaite, Griezmann and Firpo coming in for Suarez, Fati and Alba, the side became redundant, unable to take advantage of the tired legs and transition quickly in the final third. As a result, Barcelona saw their final-third involvement drop significantly after the changes.

Celta Vigo made things hard for Barcelona with their quick transition and attacks from the middle after stealing the ball. However, Garcia’s side tried to use the left and the right flank to progress ahead. Using the left-flank predominantly, the side used a chain of short passes to exploit Barcelona’s weakness dealing with the width. 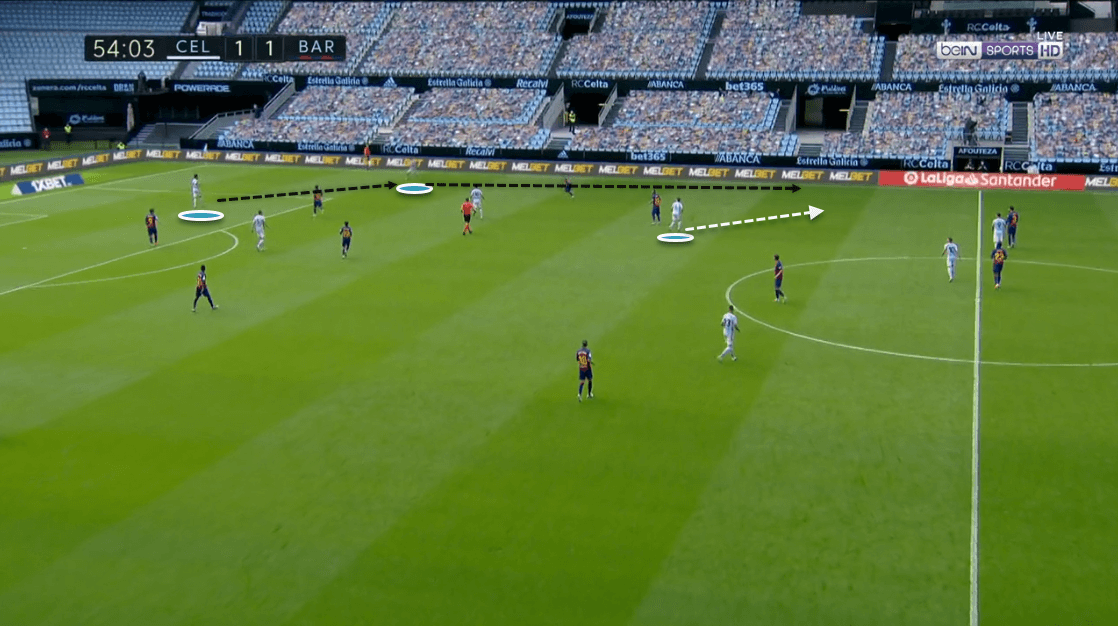 The figure above shows one of the moves frequent in Celta Vigo’s progression. Although the side opted to go for long goal kicks, the movement from the left was a frequently observed activity. Taking advantage of González and Denis Suarez, the Celta Vigo side used wide left to go ahead, to ultimately land the ball to one of  Aspas or Smolov. Although much of their attacks came from the counter-attacks and utilization of Barcelona’s mistakes, this was an attempt at build-up from the Celta side. 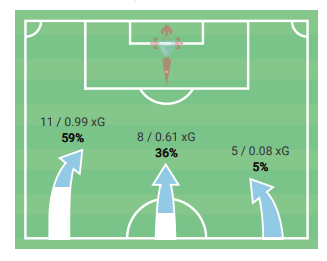 Smolov’s use as the target man while progressing from the left meant that the Russian had the chance to combine with Aspas higher up the pitch to find a way to shoot himself. Hence, as the attack-map shows above, most of the attacks came from the left and had better xG than the other sides of the pitch. 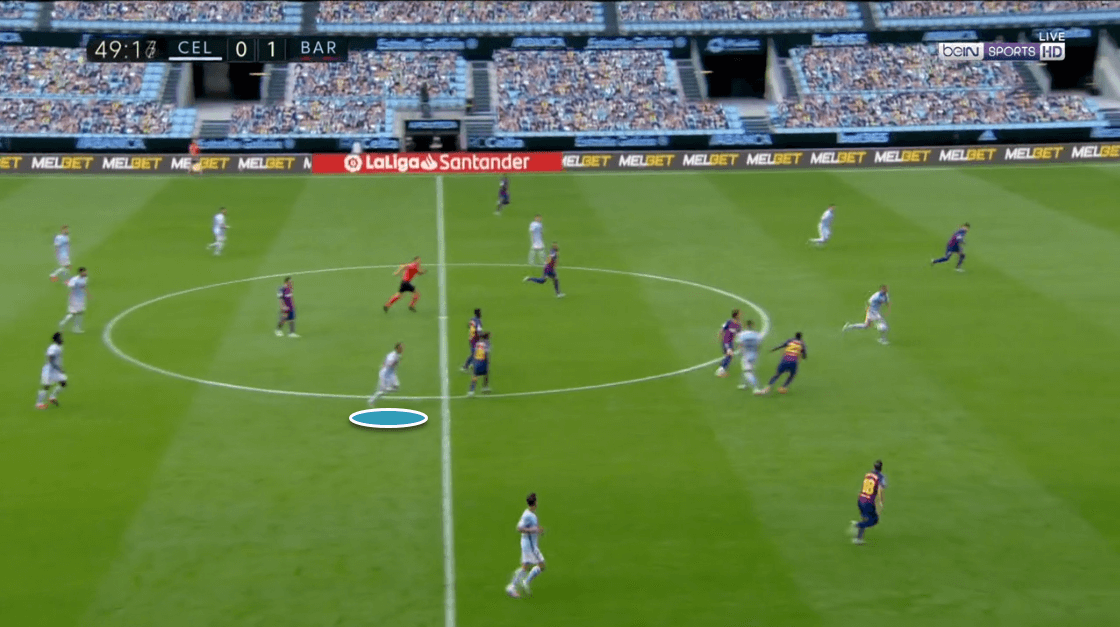 Similarly, Celta Vigo were quick to capitalize on the errors that Barcelona made. While the forward pressing duo of Smolov and Aspas always forced errors out of oppositions, the transition from getting the ball to creating an attack was very quick throughout the match. In the instance shown above, after recovering the ball in the centre of the pitch, the player quickly passes the ball to Yokuşlu, who’s in a more advanced position and in numerical superiority, with Smolov making run as well. With this quick pass, Celta Vigo, here, manage to put two players against one single defender – an advantage that is highly beneficial for the attacking side. 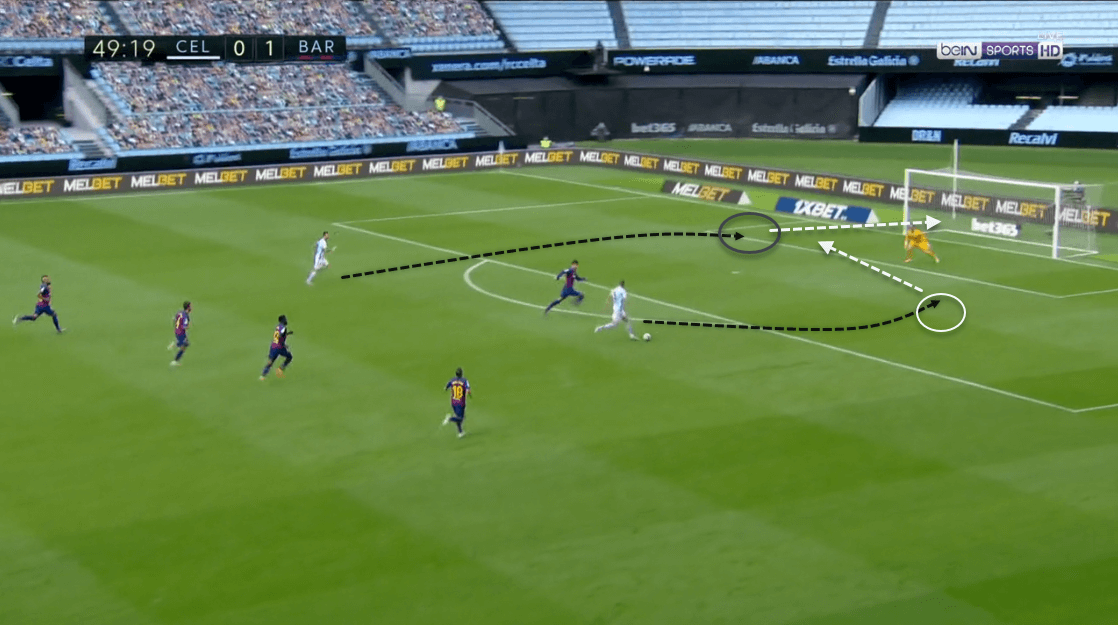 The setup worked very well for Celta Vigo, as their first goal came from this move. As we can see, the run-making player (Yokuşlu) pulls the defender towards him to finally lay it off for Smolov to shoot in front of a helpless Ter Stegen.

With frequent use of pace like these, Celta Vigo created quite a problem for Barcelona defence whenever they got an opportunity, which we will discuss as the analysis progresses.

It has been a common sight of seeing opposition teams take a defensive approach playing against Messi and company. Celta Vigo were no different, as the side also looked to sit-back, defend in numbers and catch Barcelona on the counter. To pinpoint, Celta Vigo’s 5-3-2 shape without the ball helped them to attain this motive. 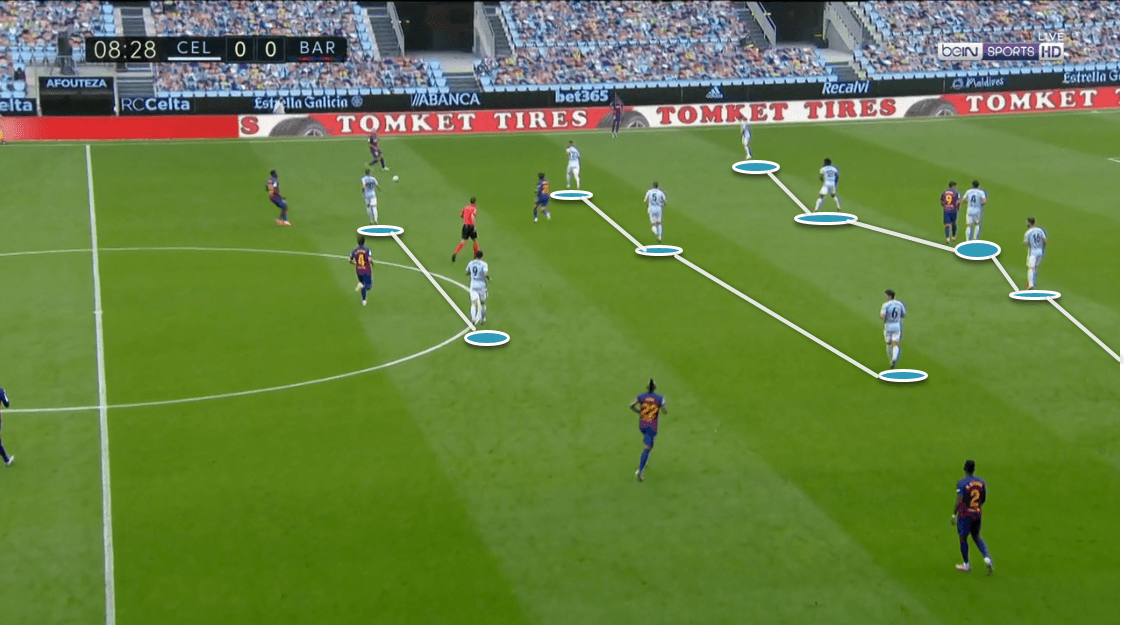 As we can see, the shape lays lateral and occupies the horizontal side of the pitch. This helped Celta Vigo to defend wide as well as to come compact with players from the middle block helping the defence when Barcelona tried to create a central overhaul. Similarly, on transition, the wide players of the five-man backline were a direct link to the two forwards.

Similarly, Celta Vigo defended in numbers when Barcelona advanced to the final third, and they used this effectively to restrict Barcelona throughout the match. 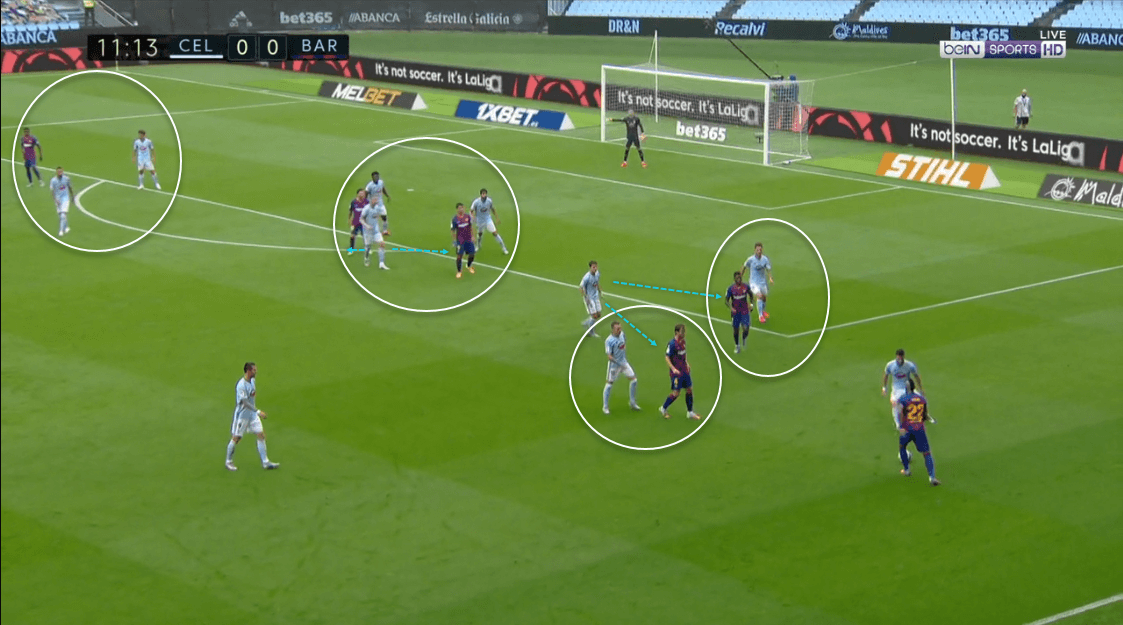 As the instance above shows, Every Barcelona player present in the high area is properly covered by two players, creating a 2v1 disadvantage for the Catalan attackers. As this is not feasible to execute with rigid marking, a vacant man is present between the two players marking the opposition, who can move (like arrows shown in the picture) towards the potential passing option to restore the advantage.

As a result of Celta’s disciplined and smart approach, Barcelona were unable to score, despite getting the ball into dangerous areas frequently throughout the match.

Despite retaining possession for longer period of time, Barcelona saw themselves concede shots quite frequently throughout the match, While Ter Stegen made vital saves to deny them, clinical finishing from Celta Vigo players would’ve made things harder fro Barcelona.

Barcelona were frequently caught from the middle, as their passing options were limited by using smart movements and extensive pressing. 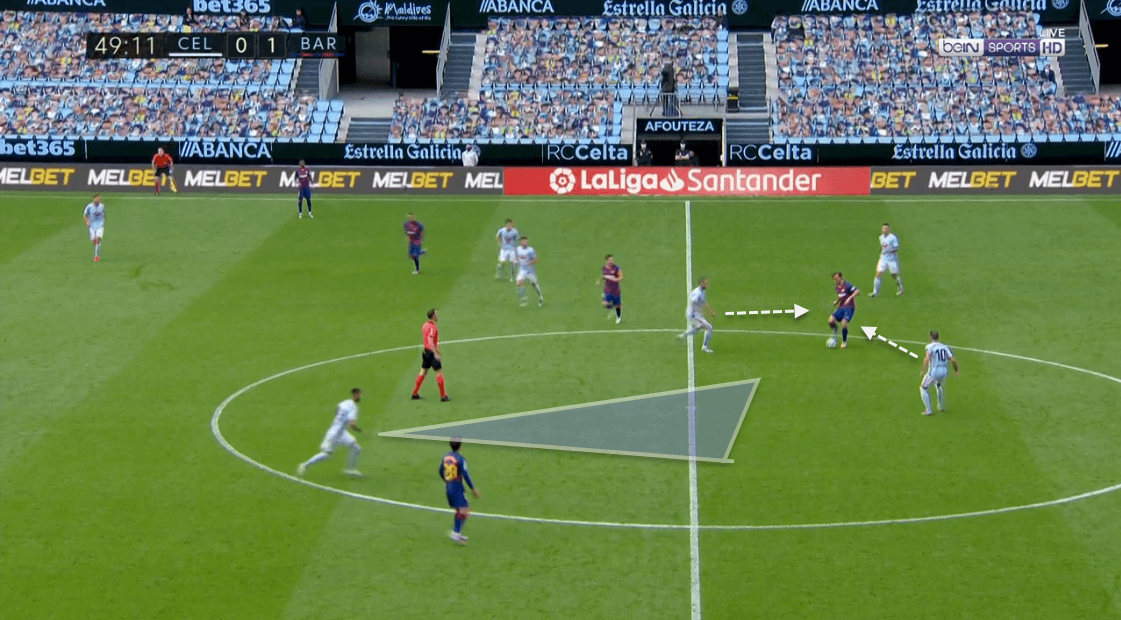 As we can see in the instance above, Rakitic is being pressured by two Celta players, limiting the time for him to make a decision on where to pass the ball. In this instance, Puig is the viable option. However, due to the defenders not being able to land themselves at the right place to increase passing options and Rakitic’s lack of awareness causes Barcelona to lose the ball. In this case, the arriving player cuts off the passing lane in front of Puig to win the ball back after Rakitic attempts to pass to release pressure. This move results in Barcelona suffering a counter-attack.

Barcelona’s weakness in duels were also a reason for their defensive woes, as the following picture suggests: 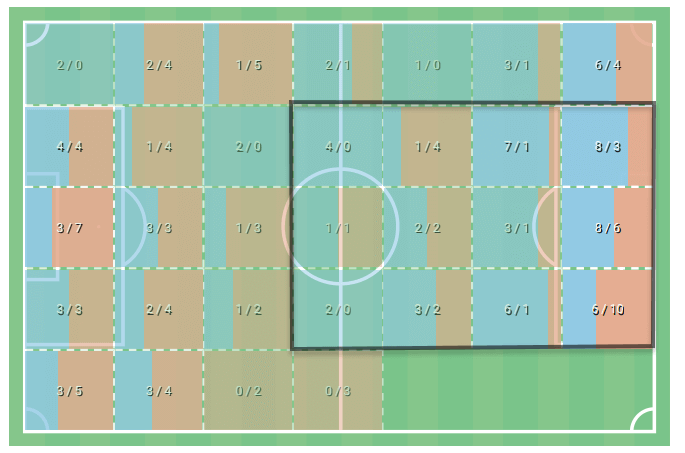 Barcelona lost duels quite often in the risky zones (inside the box), which made them suffer against a quick attacking side like Celta Vigo. 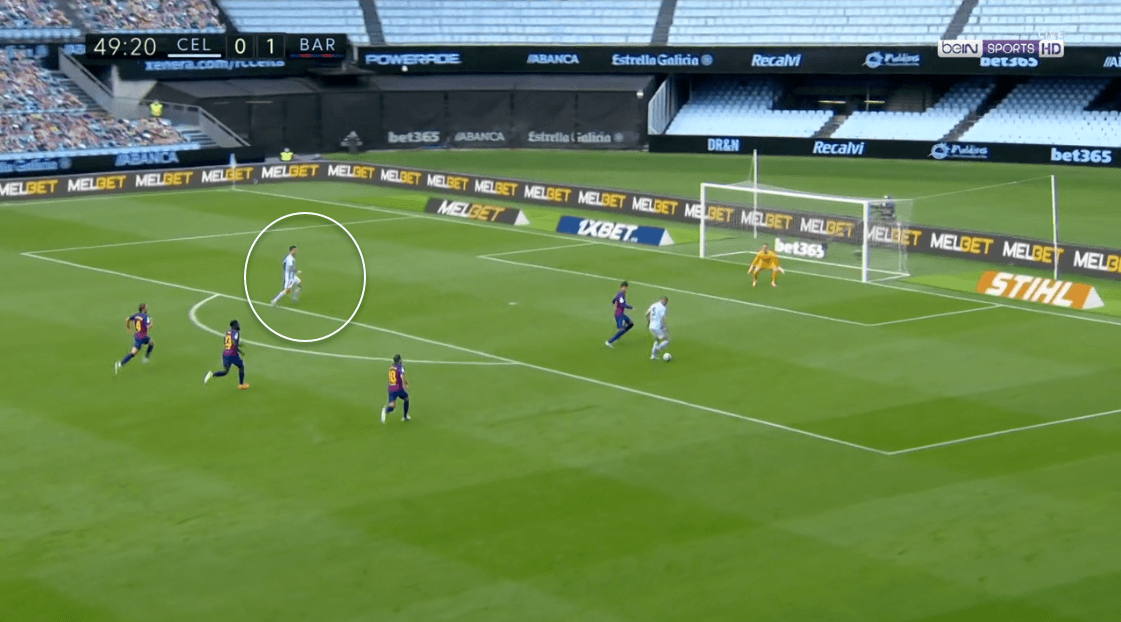 Similarly, throughout the match, Samuel Umtiti was unable to cover his defensive area when defending a counter-attack. The instance shown above is the move in which Barcelona conceded their first goal. It clearly shows Umtiti’s lack of positional awareness that gives Celta Vigo attackers a 2v1 situation to score a simple tap-in past ter Stegen. The vacant man, Smolov, would’ve been marked if the defenders kept their sync going.

Similarly, Ter Stegen’s distribution was rustic throughout the match. Barcelona were frequently caught in their attempts to play out from the back, as the defensive tactics was well-read by the opposition. In this case, Barcelona centre-backs spread wide to stretch the press. However, in the lack of a viable passing option, Ter Stegen decides to go with the risky option, trying to pass through an area covered by the opposition. The move results in Celta Vigo taking a shot at Barcelona’s goal. 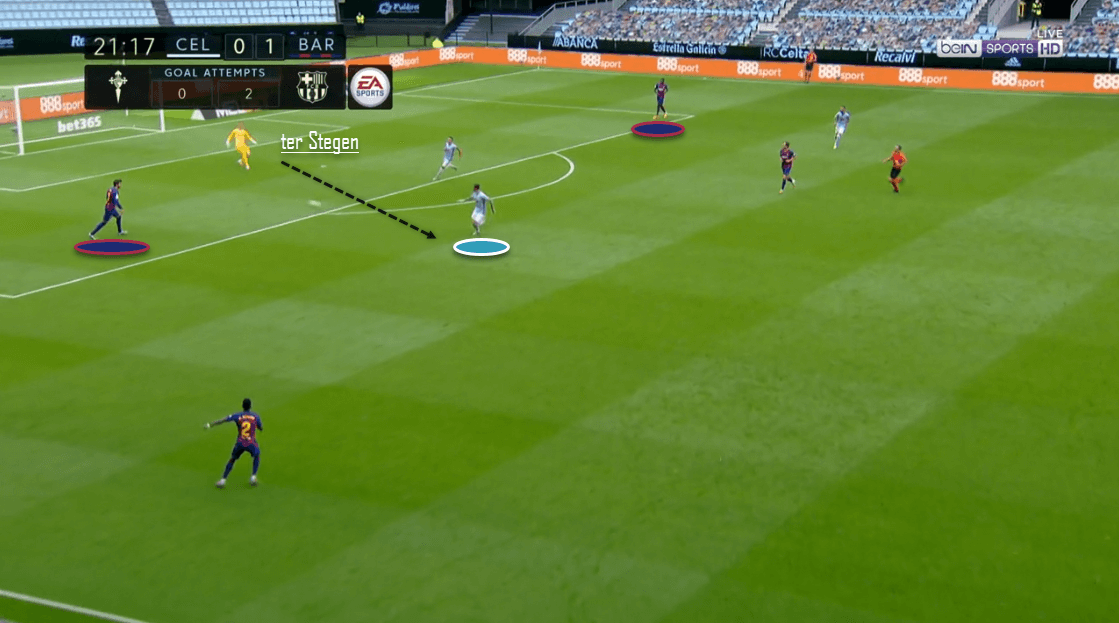 Similarly, Barcelona’s passing option from the back, the defensive midfielder was always closely marked by the opposition, which caused further lack of passing options. This problem made Barcelona lose the ball frequently inside their own half. 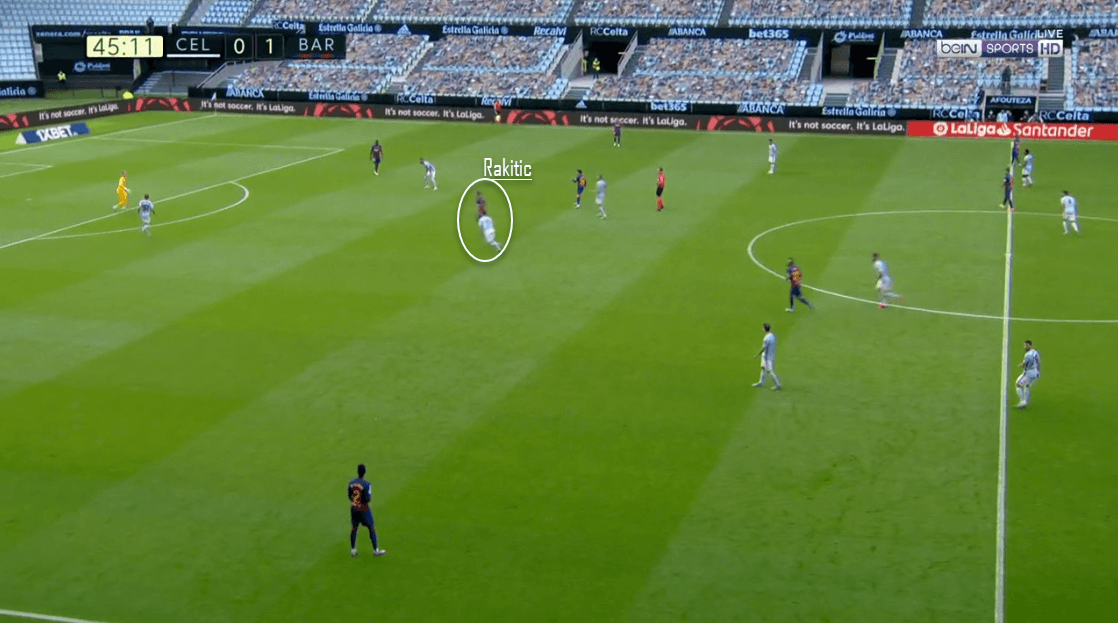 An excellent Iago Aspas freekick towards the end made Barcelona drop points yet again at Balaídos. Barcelona failing to secure three points means that Real Madrid are now in the driving seat of the league by a margin. Celta Vigo will be happy with the hard-fought point, but will still look to work on their finishing to make things harder for their opponents.

All in all, a nail-biting title decider (potentially) at Balaídos with a lot to talk about tactically.