The former Bristol City manager has been busy overhauling the Easter Road squad following what was a disappointing 2021/22 season for the Edinburgh side.

Johnson has been tasked with rebuilding the Hibs squad this summer after they struggled to an eighth-place finish in the Scottish Premiership last season.

The Hibees have already made several signings under Johnson, with the capture of former Nantes forward Youan in a loan-to-buy deal from Swiss Super League side St Gallen one of their most recent deals.

The dynamic forward, who spent the second half of last season on loan at Belgium side KV Mechelen, had options across Europe but chose Scotland’s capital as his next destination.

In this tactical analysis in the form of a scout report, we will take a closer look at Youan’s playing style, analyse his statistics from his time at St Gallen and his role in the Swiss side’s tactics, to assess what kind of an impact he could have in this season’s Scottish Premiership.

Youan is a right-footed forward who can play several attacking positions. His versatility has seen him deployed as either a central striker or on the left wing. He has also played in a secondary striker/central attacking midfielder role, as he did recently in one of Hibs’ pre-season fixtures.

In the first half of the last season at St Gallen, Youan was used in several positions in their two main formations. In their 4-3-3, he was mostly played on the left-wing while in their 4-3-1-2, he was used as one of the two strikers or even in one of the three midfielders on a few occasions.

Pacey and dynamic, Youan is a powerful runner who can help stretch defences and open up space for his teammates to exploit.

At 183cm and 70kg, he has good physical attributes which, coupled with his speed and movement, make him a big threat in behind. 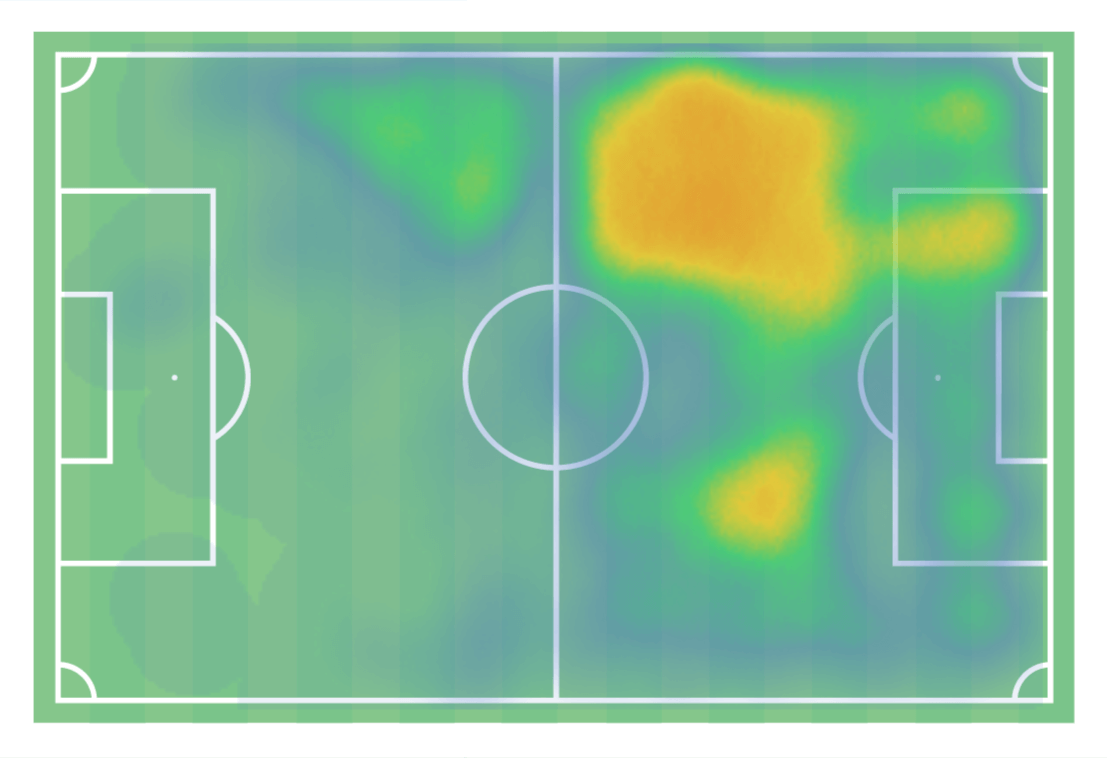 His heatmap for last season shows the majority of Youan’s touches out in that left-wing area and further back from when he was used as a central midfielder.

Looking at his pizza chart from 2020/21, which uses Wyscout data converted into percentile ranks to compare him with other forwards in the Swiss Super League (min 1,000 minutes played) that season, we can build a more detailed picture of Youan’s profile. 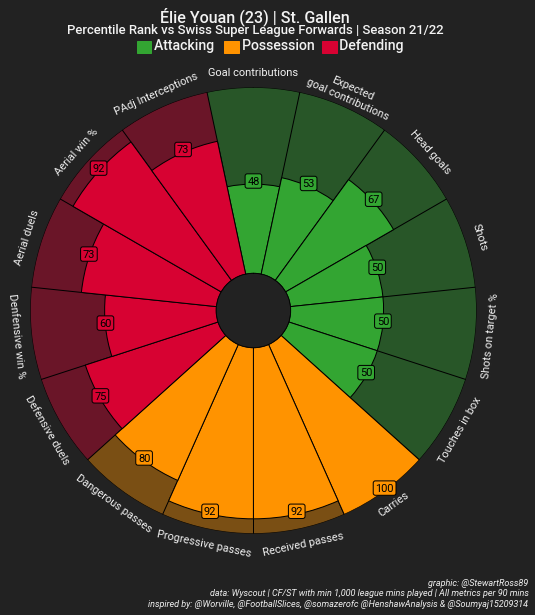 Looking at the attacking section first, we can see Youan’s output was around average for a forward in last season’s Swiss Super League. He scored 6 league goals, from an xG of 6.08, and registered one assist, from an xA of 0.81. He also ranked on the 50th percentile mark for shots per 90 (2.33) as well as his shots on target percentage (43.24%).

Youan’s possession section is impressive. Here, he boasts the top rank for carries, a combination of dribbles and progressive runs, with a combined average of 11.08 per 90. We can also see how involved he is in the build-up with a high rank for received passes – he received an average of 21.9 passes per 90. However, it is worth bearing in mind that a chunk of his minutes came in the left-wing area where he would have more opportunities to dribble than at centre-forward.

His passing numbers are very good too. His average of just under four (3.97) progressive passes per 90 gives him a high percentile rank for that metric while he also ranked highly for dangerous passes, a combination of key passes and through passes. Although these are likely skewed slightly with some of his minutes coming in that midfield role where he would have been on the ball more.

Off the ball, Youan certainly does his bit for the team. He was involved in an above-average number of both defensive and aerial duels while his win rates for both, particularly aerially, were also above average for a Swiss Super League forward. His work effort off the ball is also evident in a high rank for PAdj interceptions per 90.

As seen in the pizza chart, Youan had a decent goal return of six goals in the first half of the season for St Gallen. He has already shown his finishing prowess in a Hibs shirt with a fine goal against Burton Albion in a pre-season game, a still of which can be seen below. 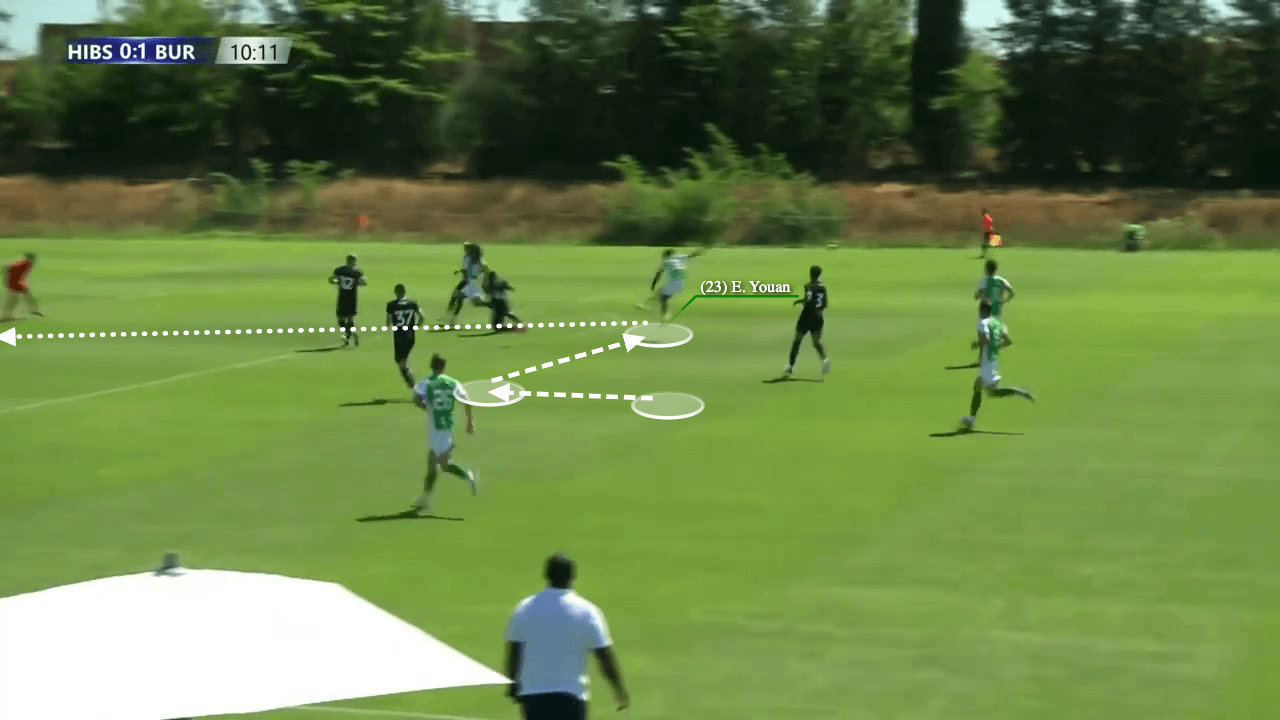 Playing in a central attacking midfield position in Hibs’ 4-2-3-1, Youan picks up a nice position between lines to receive the ball in a central area. He angles his body well which allows him to receive the ball on the move before taking a quick forward touch with his right to open up space for the shot. He then takes the shot on early, placing the ball in the bottom left corner. 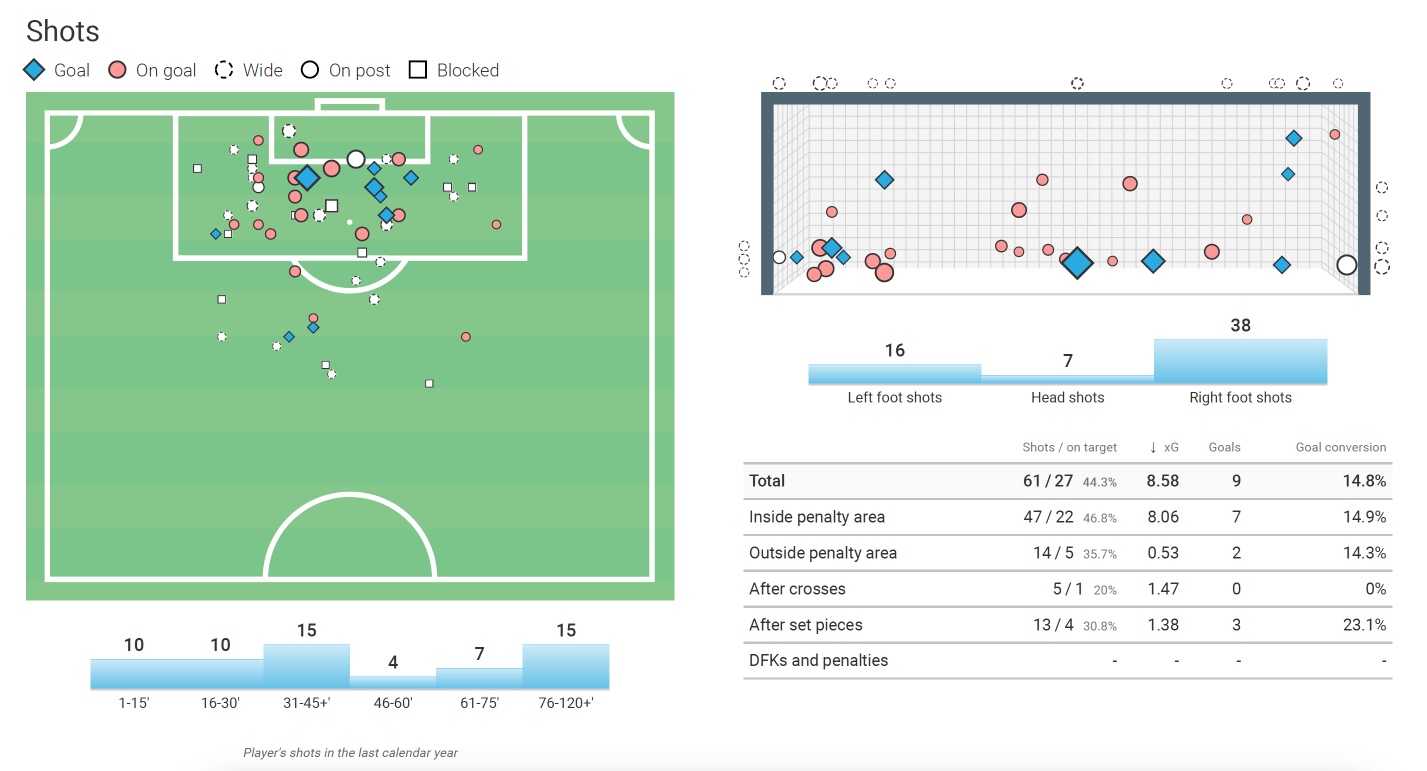 However, Youan’s finishing can be erratic at times, particularly on his weaker left. As we can see in the above graphic taken from Wyscout, which shows Youan’s shots from the last calendar year, we can see a few shots in and around the six-yard box which have gone wide. We can also see a concentration of shots into the bottom left of the goal, which was exactly where he placed his shot for Hibs in the first example. 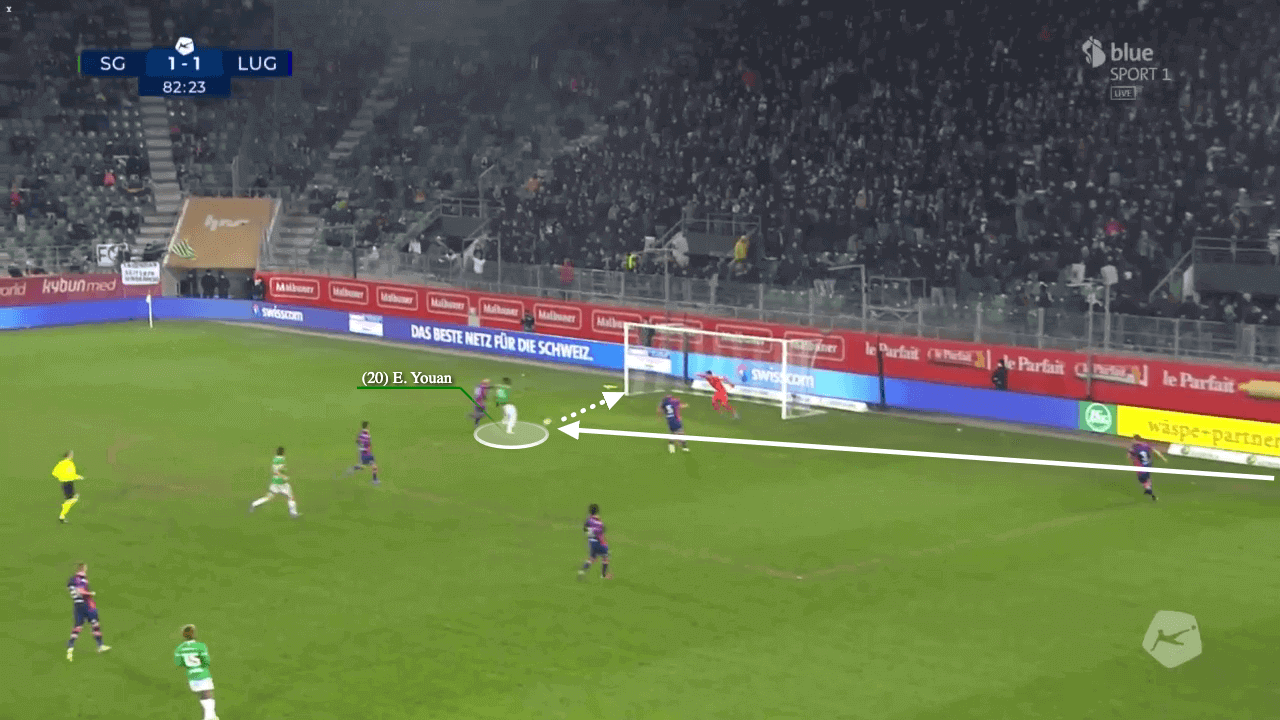 He does lack composure when it comes to these high-quality chances though. As we can see in this example from last season with St Gallen.

Here, Youan initially shows good movement to get across his man and position himself well in between the posts. However, his finish from the cross, at what is a key moment in the game for his side, is unconvincing and comes back off the post. Admittedly on his weaker left foot, this is an opportunity many prolific strikers would take easily.

Despite missing his share of good chances, Youan can produce a variety of finishes, including headers, as shown in the pizza chart which seen him rank above average for a Swiss Super League striker for head goals per 90. 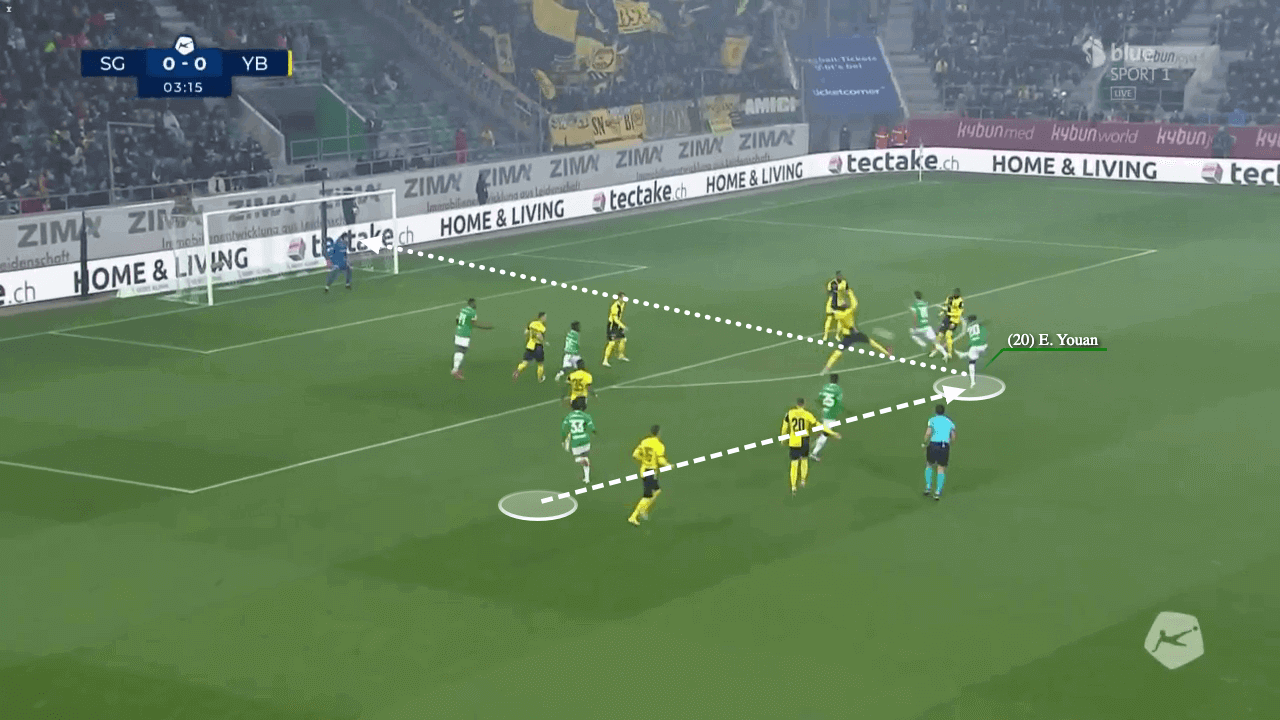 He is also capable of finishing from range. As seen in the shot graphic earlier, he has scored two goals from outside the box in the last calendar year. An example of one of those is shown above from a game for St. Gallen against Young Boys.

Here, Youan receives the ball from the left-back in the left half-space. Allowing the ball to roll across his body, he takes one touch with his right to set himself for the shot. He then produces a quick, powerful shot which flies past the Young Boys’ goalkeeper. Again, this is quite an instinctive finish but shows Youan can be a threat from range.

Youan’s ball-carrying is one of his biggest strengths, as seen in his pizza chart where he had the top rank for carries, a combination of dribbles and progressive runs, of all forwards in the Swiss Super League last season. He averaged the most dribbles of any forward with 8.31 per 90 while he was also in the top five for progressive runs with 2.77 per 90.

He is well balanced when dribbling and has good upper body strength which makes it difficult for defenders to disrupt his rhythm once he is at speed. 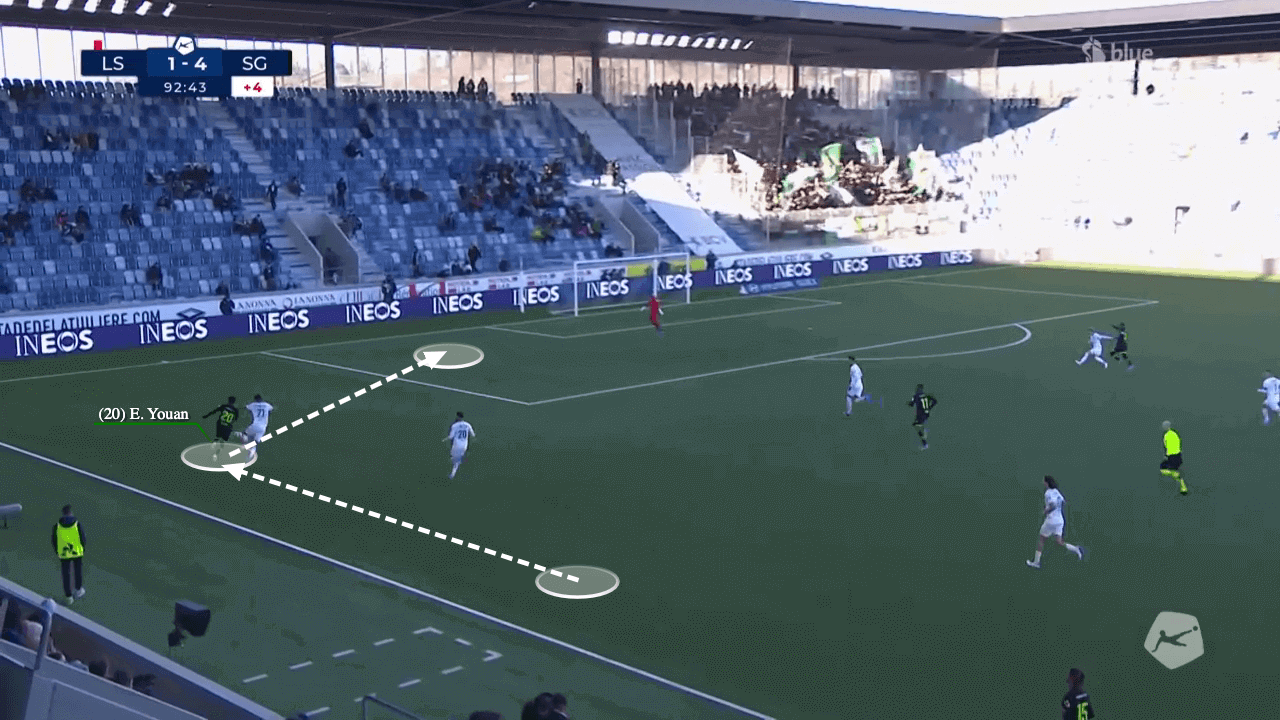 In the above still, we can see an example of how dangerous Youan’s ball-carrying can be. Here Youan has taken up a position high and wide on the left. Receiving the ball from a throw-in down the line, he takes a touch with his right to angle his run towards the box.

He displays his speed and strength to get his body in front of the defender. He continues to carry the ball at speed and, although the defender matches him most of the way, he gets into the box. He then takes a touch across the defender which entices him to haul Youan back, resulting in a penalty for St Gallen. 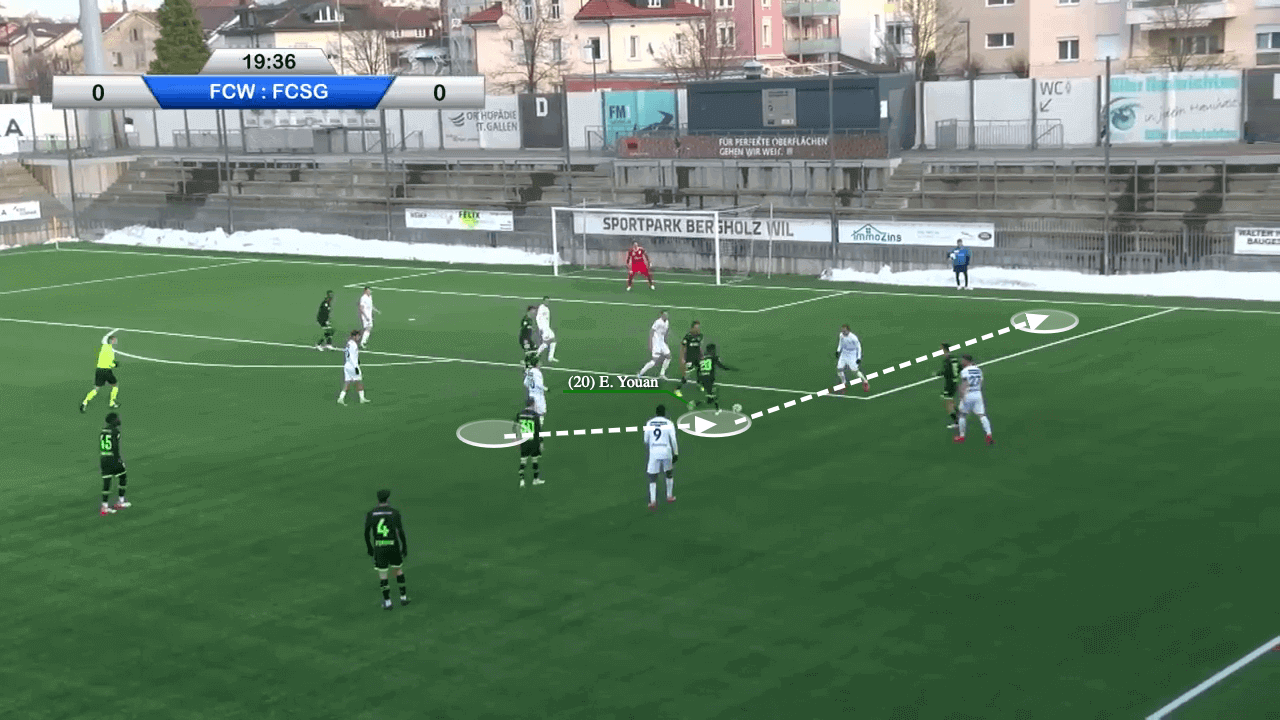 In this next example, we can see Youan use his dribbling to attack the opposition in a more central area. Here, after exchanging passes with his midfield teammates in the right half-space, Youan drives towards the opposition’s left-back.

He shows good ability in the 1v1 situation, knocking the ball past the defender on one side, before darting around on his outside to get to the ball and create an opportunity to cross into the box. However, he is unable to find a teammate with his delivery certainly an area he could improve on.

With high-intensity pressing a hallmark of Lee Johnson’s side, Youan will play an important role for Hibs when they are out of possession, something he is more than capable of.

As evidenced in his pizza chart, he offers a lot off the ball. He averaged just under three (2.96) Possession adjusted (PAdj) interceptions per 90, one of the highest of any forward in the 21/22 Swiss Super League. He was also active in defensive duels, involved in 4.97 per 90 of which he won 56.96%. 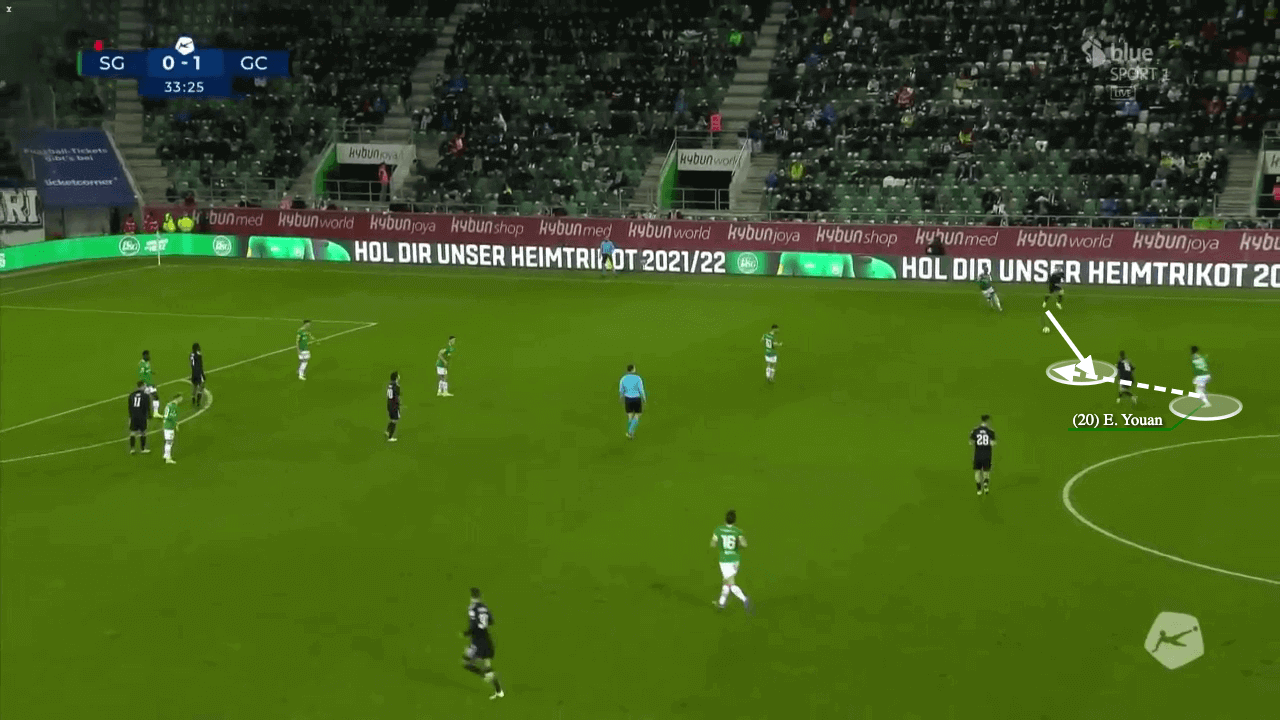 Here we can see an example of Youan’s efforts off the ball for St Gallen. A goal down and a man down at home to Grasshopper, Youan shows great desire to work back and help his team out. As he works back, we can see he is alert to the ball inside and is already making a move towards the line of the pass. He is then able to nip in front of the intended recipient of the pass to intercept. 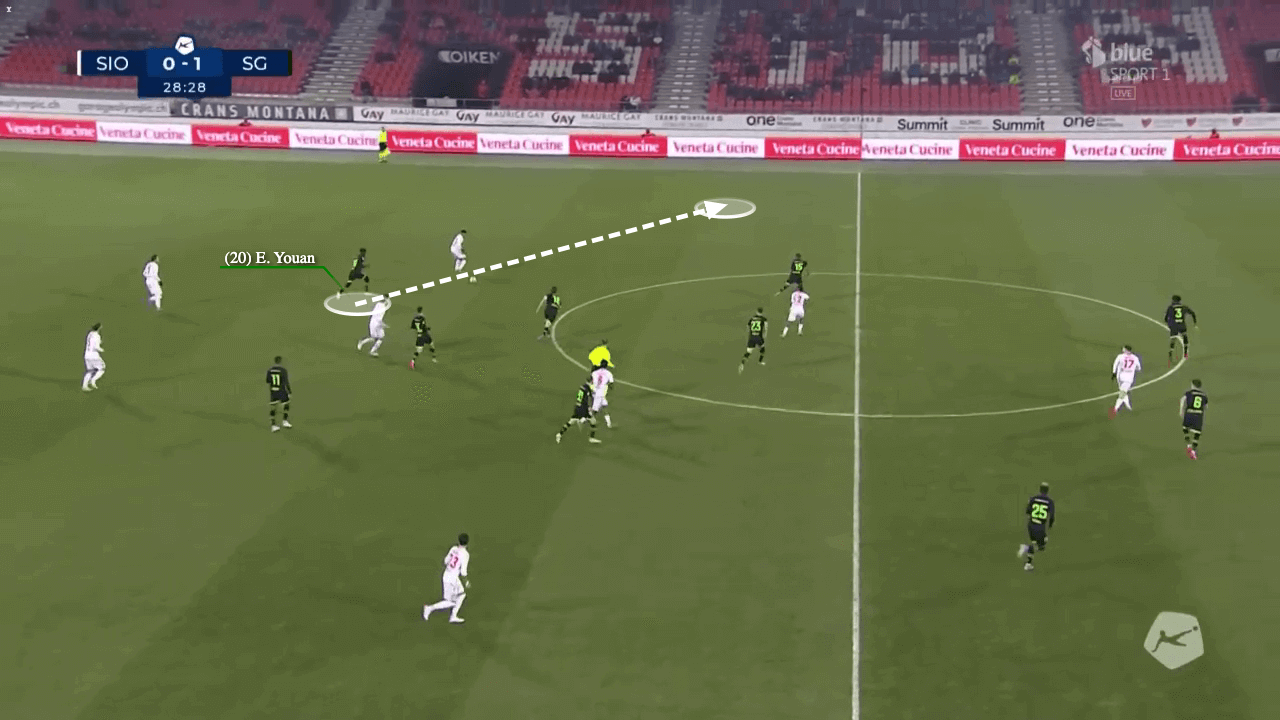 In this second example from a game for St Gallen away at Sion, we see Youan in a centre-forward position chasing down an opponent aggressively. Although the receiver has a couple of yards on Youan to start, he shows fantastic pace to catch up and quickly get his body in tight with the Sion defender. He is smart not to foul and matches the run, forcing the left-back into a heavy touch which allows Youan in to steal possession.

He also demonstrates a good piece of skill and awareness after winning possession back. Rather than playing a safe pass back to his defence, Youan executes a nice backheel which picks out a teammate in the middle of the park in a dangerous position.

Hibs have made several interesting signings this summer and it certainly looks like Youan is another to add to the list.

Well suited to Johnson’s system and with good versatility, he has the potential to be a very effective player for Hibernian in the Scottish Premiership this season, as this analysis has shown.

If he can polish up on a few aspects of his game during his time in the Scottish Premiership then there may be more clubs around Europe who start to show an interest in a player with undoubted talent.