Striker struggles: taking Brighton to another level with a brand new centre-forward

Brighton & Hove Albion can finally comfortably state that they will be staying in the Premier League for another season. With nine matches left to play, they have a safety net of six points over Fulham in 18th, and a game in hand too. Their performances have improved significantly since Chris Hughton was in charge and even last season under Graham Potter, but their points total less so.

Brighton’s season has been one of misfortune – starting the season off with an awfully out-of-form keeper in Mat Ryan, and not getting much luck at the other end of the pitch either. Potter’s playing style deserves more points than it has, and some blame must be placed upon the forward line. Neal Maupay scoring 8 in 27 appearances has not been good enough, but in this analysis, we will be utilising data insights to find a better option upfront.

This data analysis will use statistics to find a ready-made centre-forward for Potter’s Brighton, from division’s which the Seagulls have recently made purchases (Ekstraklasa, Swiss Super League, Eredivisie, Belgian Pro League, Championship, and Eliteserien). Our dataset consists of players who have primarily played as a striker this season, are aged between 18-29 years old, and with at least 1000 minutes played in the league.

At the end of our analysis, we will highlight three options, two ‘ideal’ options and ‘one for the future’. All data used in this piece is correct as of 22/03/21.

Firstly, we will look at our dataset’s clinical edge. Although Maupay has spent a fair portion of game time as a left-forward this term, operating as more of a second striker than a typical #9, his underperformance on expected goals has not been of the required standard. 8 goals from nearly 11 xG does not meet the level that Brighton are hoping to achieve with their young and ambitious squad. Let us rectify that. 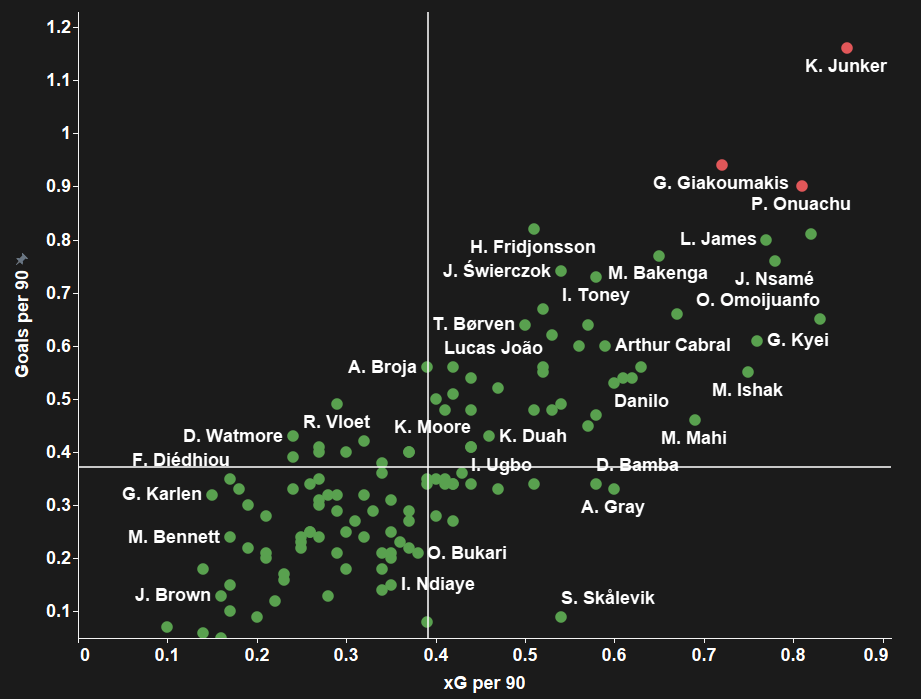 Leading the way for both xG per 90 and goals per 90 is Kasper Junker of Bodø/Glimt in the Eliteserien. Junker led the line for an indomitable Bodø/Glimt side which won the league with a 19 point gap on second place, and the 27-year-old contributed an incredible 1.16 goals per 90 in the process with an underlying xG figure of 0.86.

Sitting atop of the Eredivisie scoring charts in 2020/21 is, somewhat inexplicably, Giorgos Giakoumakis of VVV-Venlo. Yes, that’s right, VVV-Venlo, who got thrashed by Ajax 13-0 earlier on this season. The 26-year-old Greek is leading the Dutch scoring charts at a rate of 0.94 goals per 90 with an underlying number of 0.72.

Paul Onuachu at Genk this term has impressed in the Belgian league with his scoring endeavours. 0.81 xG per 90 has produced 0.9 goals per 90 has helped push Genk into third place in the current league campaign, after a somewhat underwhelming presumptuous end to the last season, where they finished 7th in the league.

Under Potter, each part of the attacking unit has become comfortable playing in different positions. For example, Leandro Trossard, the nominal right-winger, acts as more of a #10 in-game, with Maupay moving up to form a striking partnership. So, as a striker, let’s take a look at which ones are the most creative in our dataset. 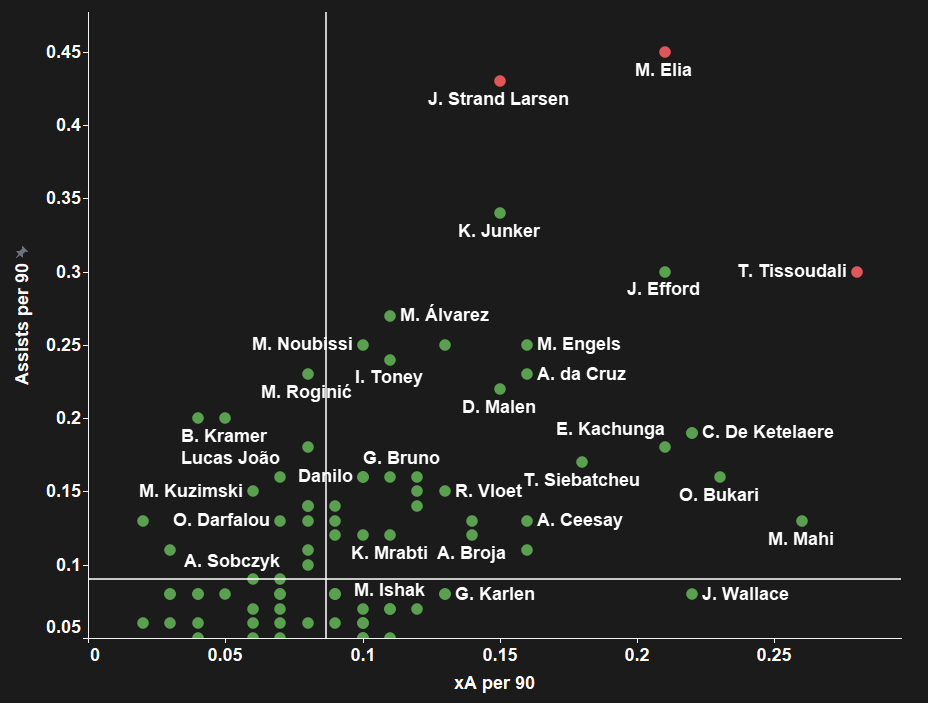 Tarik Tissoudali of Gent, in terms of underlying numbers, is the most creative centre-forward in our skillset. The 27-year-old is producing 0.28 xA per 90, spending half the season at K Beerschot VA, joining Gent in the January transfer window, where has continued to contribute to his 0.3 assists per 90.

Meschak Elia at BSC Young Boys is another young centre-forward who is expressing his creative ability at the Swiss club. The 23-year-old is producing a dataset-leading 0.45 assists per 90, but he is overperforming his xA number two-fold of 0.21 per 90.

Another young forward, Jørgen Strand Larsen at Groningen is also producing assists well above the expected rate. The 21-year-old is currently sitting at 0.43 assists per 90 from an xA per 90 of 0.15. In his maiden Eredivisie campaign, he has massively impressed, far outreaching what people had expected of him.

Finally, to round out our statistical analysis, let us look at which centre-forwards are defensively active. In the modern game, the ability to be apart of an effective pressing unit is becoming ever more necessary, so taking a deep dive into our datasets defensive output is almost as important as the attacking output. 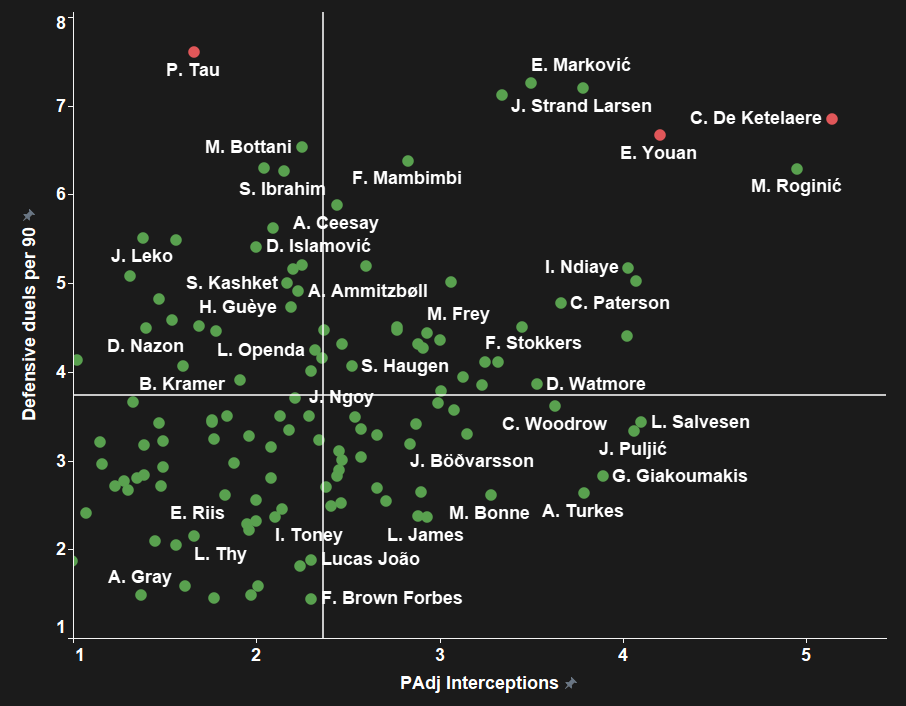 Now, leading the way for defensive duels per 90 is actually a Brighton player. Before the January window, Percy Tau was playing for RSC Anderlecht on loan. The 26-year-old has spent time in the centre of the park as well as upfront, so his dataset-leading 7.6 defensive duels and 1.66 PAdj interceptions per 90 makes sense.

Charles De Ketelaere, a Belgian international, has predominantly played as a centre-forward but has also been playing in central midfield as well. His versatility is a valuable asset, and it has helped him develop his press greatly, as seen in his 6.85 defensive duels and 5.14 PAdj interceptions per 90, impressive for a 20-year-old.

Élie Youan is another promising young attacker who has been impressing with his defensive application out on loan at St Gallen in the Swiss league from Nantes. 6.67 defensive duels and 4.2 PAdj interceptions speak for themselves, and should he develop the other sides of his game, the 21-year-old could be a top prospect.

Now, we have to take into consideration that Brighton do not have an unlimited budget. Their record transfer fee paid for Alireza Jahanbakhsh is £17m, so that will be our limit in terms of budget on this one player. Besides, some players in our dataset, such as Donyell Malen, are being linked with clubs of a higher calibre than Brighton, and as such will not be considered. 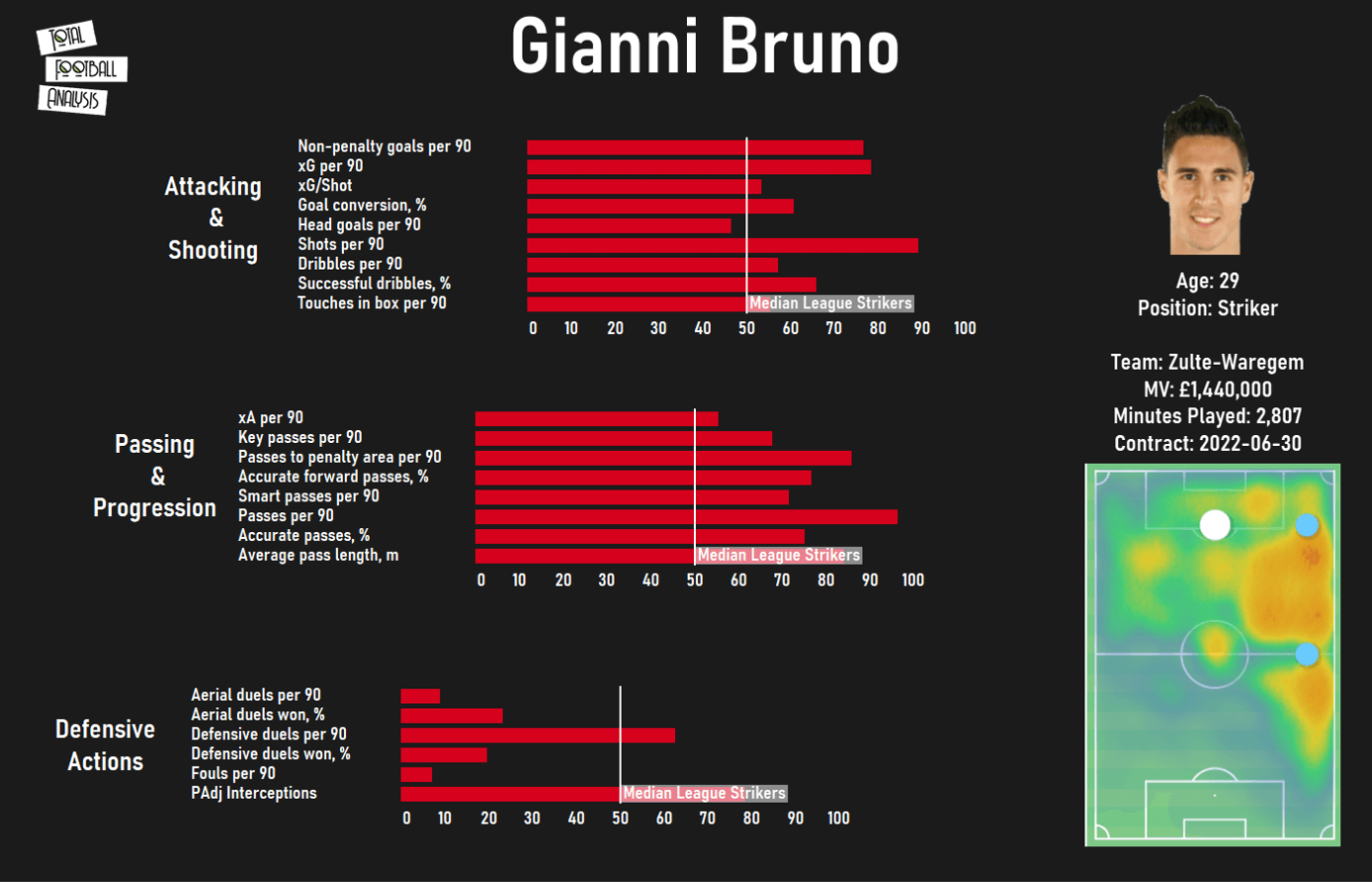 Gianni Bruno, after the statistical analysis mixed with a bit of video scouting, came aloft in my personal opinion of the most well-rounded forward of the bunch. Standing at 5’9” / 175cm, Bruno mixes strong upper body strength with decent pace and anticipation to help run the channels and cause problems for opposition defensive structures off the ball. His movement is his strongest asset – it aids him in scoring goals of his own and creating space for others to shoot. When he does get in front of goal, this season he has been calm and composed.

17 goals in the 20/21 league campaign is the biggest number in one season across his professional career so far. At 29 years old, there is plenty to suggest that he is just now hitting his peak years and should contribute at the top level for a few years yet. One reason he has been chosen as an ideal target is because of his versatility, as we mentioned, is so important in Potter’s system. Bruno has played his best as a centre-forward but has put in good performances out wide, and in fact, much of his time in games is spent on the right-wing anyway. 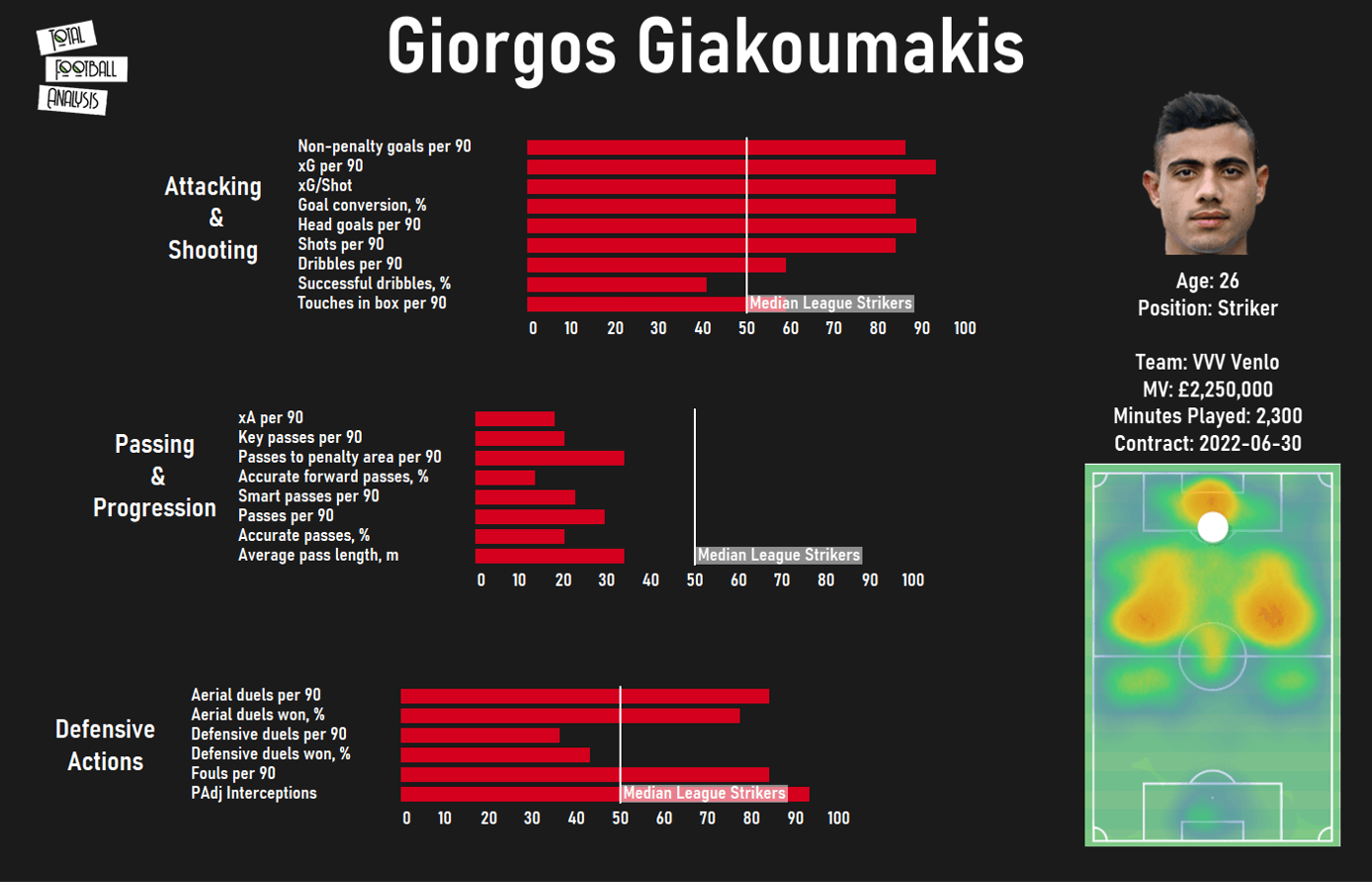 Giorgios Giakoumakis has got to be bargain signing of the season across all of Europe. £200k is all they paid for the Greek striker, and he has returned 24 goals in 2172 minutes so far this term. That, while playing for a rather poor VVV-Venlo is seriously impressive and cannot be ignored. His progression as a player has sky-rocketed this season, his career-best in a single season before this one was 11 for AO Platanias nearly four years ago. So, there is a sense that he could be a ‘one season wonder’ – but his current scoring rate cannot be ignored.

Now, we wanted to solve Brighton’s goalscoring issue, and Giakoumakis would go some way to remedying that. However, he is a poacher in its purest form, and Potter should expect no more than that. The 26-year-old is 6’1” / 183cm, he has a bulky frame which assists him in dominating his physical duels. He is the combative type: he likes to lean on his opponents and create space for himself this way. His finishing technique is unique and clunky, traditionally opting to find the bottom corner, which he has become quite accustomed to this season.

One for the future 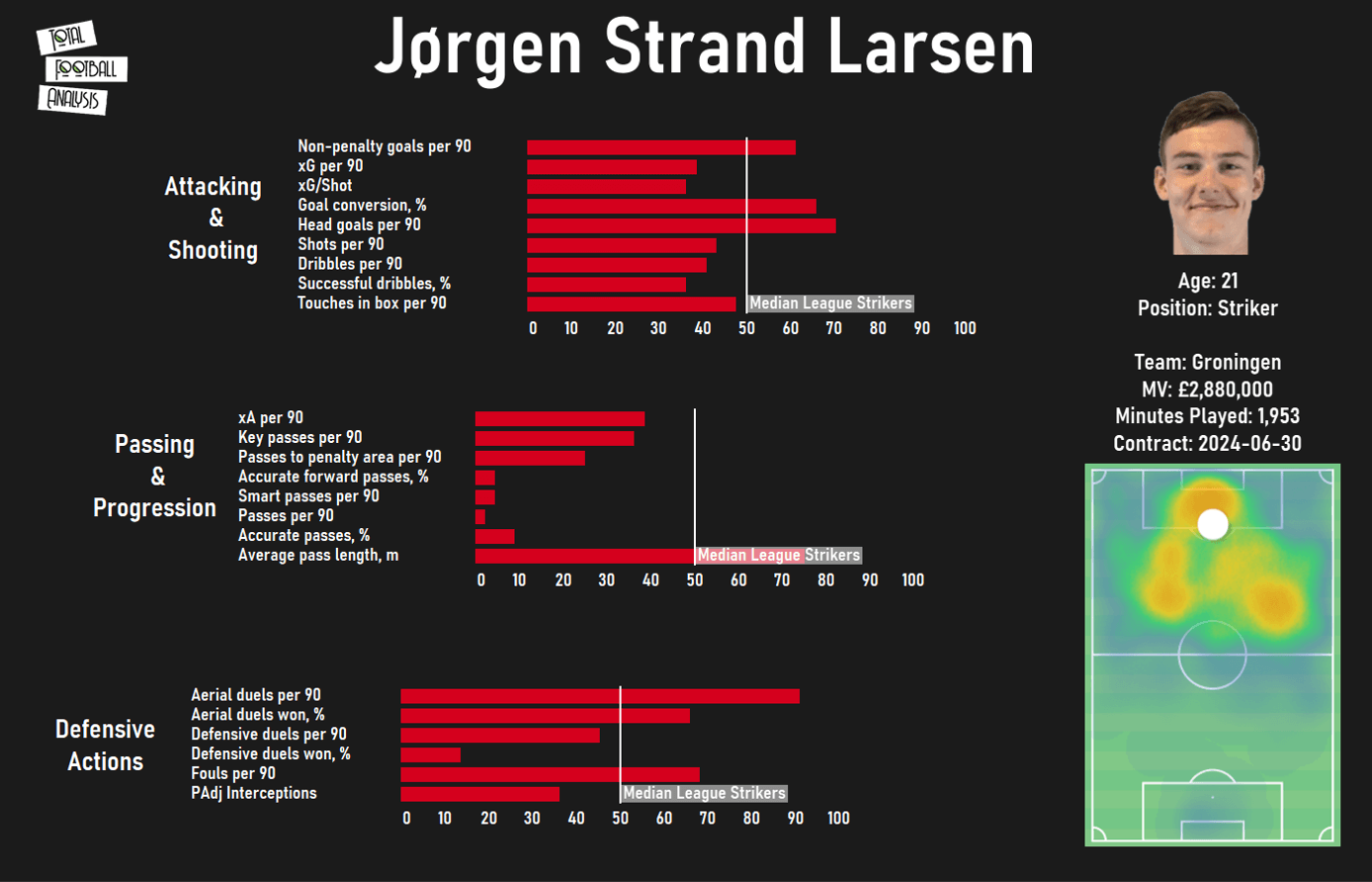 Jørgen Strand Larsen is a young centre-forward quietly going about his business in the Eredivisie this season. His name might sound familiar – he spent a season on loan an AC Milan with their Primavera team a few years ago, but since then he has gone on to develop his trade in Norway and Holland. Sometimes, his playing style is not the easiest on the eye – expect no flashy skill moves from this 6’4” / 193cm lanky forward. What he does provide is a well-rounded attacking skillset where can contribute both goals and assists using his physical advantages.

14 goal contributions in just over 1800 minutes in the league is good going for a player who turned 21 during the season. He is a pure centre-forward, and would not suit a position out wide, which is something to note if he were to move to Brighton. He can act as an excellent focal point for other attackers to play around while possessing excellent movement to latch onto whipped crosses. He has that indescribable nose for goals that will hold him in good stead at any level, making him a very promising prospect.

Alas, we have three options that Brighton could sign to fix their striker struggles. Two ‘ideal targets’, one extraordinarily well-rounded forward in his peak, and one out and out goal scorer who would sort out Brighton’s finishing issues, in theory. We also have ‘one for the future’ who could develop to have quite the unique skillset in modern terms, but his lack of real pace may hold him back in the Premier League. Ultimately, Potter will have some names in mind already, but it will be interesting to see who he chooses if he does end up wanting a replacement for Maupay.