At the point in which football came to a halt due to the coronavirus pandemic, the Swiss Super League had a somewhat unusual look. While Young Boys and Basel sat second and third respectively it was St Gallen who led the way, albeit level on points with Young Boys. While St Gallen are the oldest club in Swiss football they have not had the success of some of their competitors. Indeed, they have only won the title twice in their history with the last title coming in the 1999/2000 season.

This year, however, something has changed and St Gallen are a side that has been built from a tactical point of view using the blueprint of a side from across the border in Austria, Red Bull Salzburg.

Red Bull Salzburg are developing a reputation as something of a hotbed for not only playing but also coaching talent. The obvious examples are the likes of Roger Schmidt and Marco Rose who have gone on to bigger things since leaving Austria, with the current head coach of the club Jesse Marsch expected to follow them sooner rather than later. If you delve a little deeper then there are a number of other coaches who have been with the Austrian side at various levels and then moved on to other clubs. One such coach just happens to be Peter Zeidler, the current coach of St Gallen.

The German-born coach enjoyed something of a journeyman career as he progressed through the various levels of German football. In 2012, he moved across the border to become coach of FC Liefering in the second tier of the Austrian game. Liefering are also a feeder club for RB Salzburg. In 2015 Zeidler was promoted up to take charge of RB Salzburg. Although he only spent a season in charge at the club before moving on to Sion and Sochaux and then eventually St Gallen he took with him the footballing model that is part of the Red Bull identity.

St Gallen are also playing this season with the third youngest average age in football at 22.9 years of age.

This game model is clearly evident when watching St Gallen play. The Swiss side are aggressive both in and out of possession. They employ an extremely vertical passing style when in possession with the ball moving forward quickly, and efficiently, into the opposition final third. Out of possession they counter-press aggressively in the initial moments of transition and try to win the ball back as close to the opposition goal as possible. After the initial moment of transition, they tend to drop into a more compact block with little space allowed centrally while the front three stay higher and look to prevent the opposition from easily progressing the ball.

This tactical analysis will provide an overview of what we have seen this season from St Gallen and what we can expect moving forward in the form of a scout report.

Let’s start with expected goals (xG) and expected goals against (xGA) and how they compare to goals scored and conceded. Currently, St Gallen are sitting on 40.33xG and have scored 51 goals. This means that they are overperforming their xG by 10.67 goals. Typically we expect to see teams that are performing well outperforming their xG so it is not something that I would be overly concerned by. They currently have an xGA of 29.87 compared with 31 goals conceding. Here they are underperforming their xGA by 1.13 goals. This slight variance is actually quite impressive and shows us that St Gallen are an impressive defensive unit. Indeed, so far this season they are conceding just 9.57 shots at goal per 90 minutes while taking 14.90 shots per 90.

In terms of understanding team style, it is interesting to note that St Gallen are only averaging 52% possession so far this season while they are producing passes per defensive action (PPDA) of 7.27. This signifies that St Gallen are not a possession orientated team, which ties in with my assertion that they play a vertical style of play in possession, and that they are extremely aggressive when pressing out of possession.

In terms of their tactical system, St Gallen favours a 4-3-1-2 (diamond) system with three central midfielders who play very much as a unit. This is in keeping with the system of play that tends to be used at the Red Bull clubs. 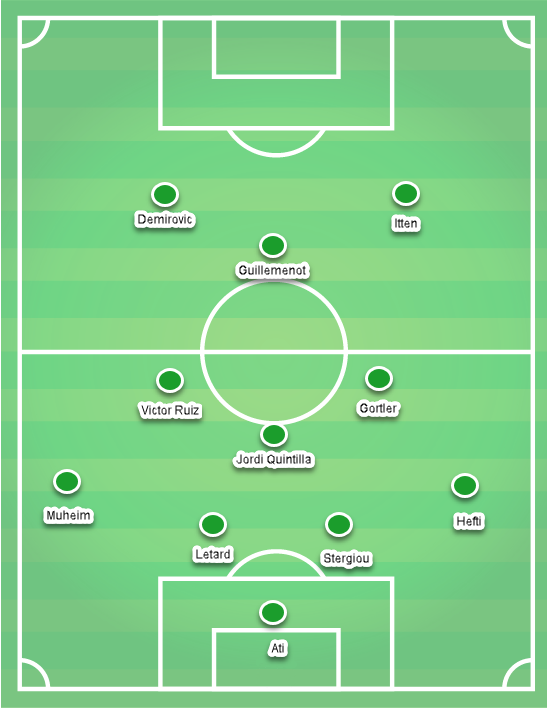 When in the attacking phase we tend to see set patterns of play from St Gallen with the ball being moved into the final third. This movement of the ball is then supported by players making forward runs to look to overload the opposition and break through the defensive block. 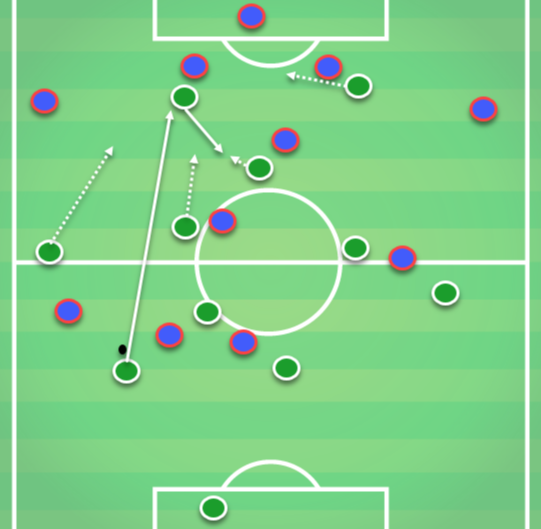 Here I have provided an example of a point in a match where St Gallen have possession of the ball in their defensive line. Each player, when in possession, will look to play forward in the first instance whether just to the midfield or to the forward player. Lateral passes are only typically made if there is no forward option that can be utilised.

Here we see the pass being played immediately into the forward player who has his back to goal. His role is to either hold up the ball or look to play one of his forward-facing players in. The key player in tying the attacking moves together tends to be the ‘10’ who plays in the hole between the two forward players. He moves left or right depending on the direction of play and tends to be the player who takes possession from these knockdowns before bringing others into play.

When the first pass is played the ‘10’ and the ball side central midfielder and fullback will move forward in the first instance in order to support the play. These movements allow the Swiss side to overload the opposition. 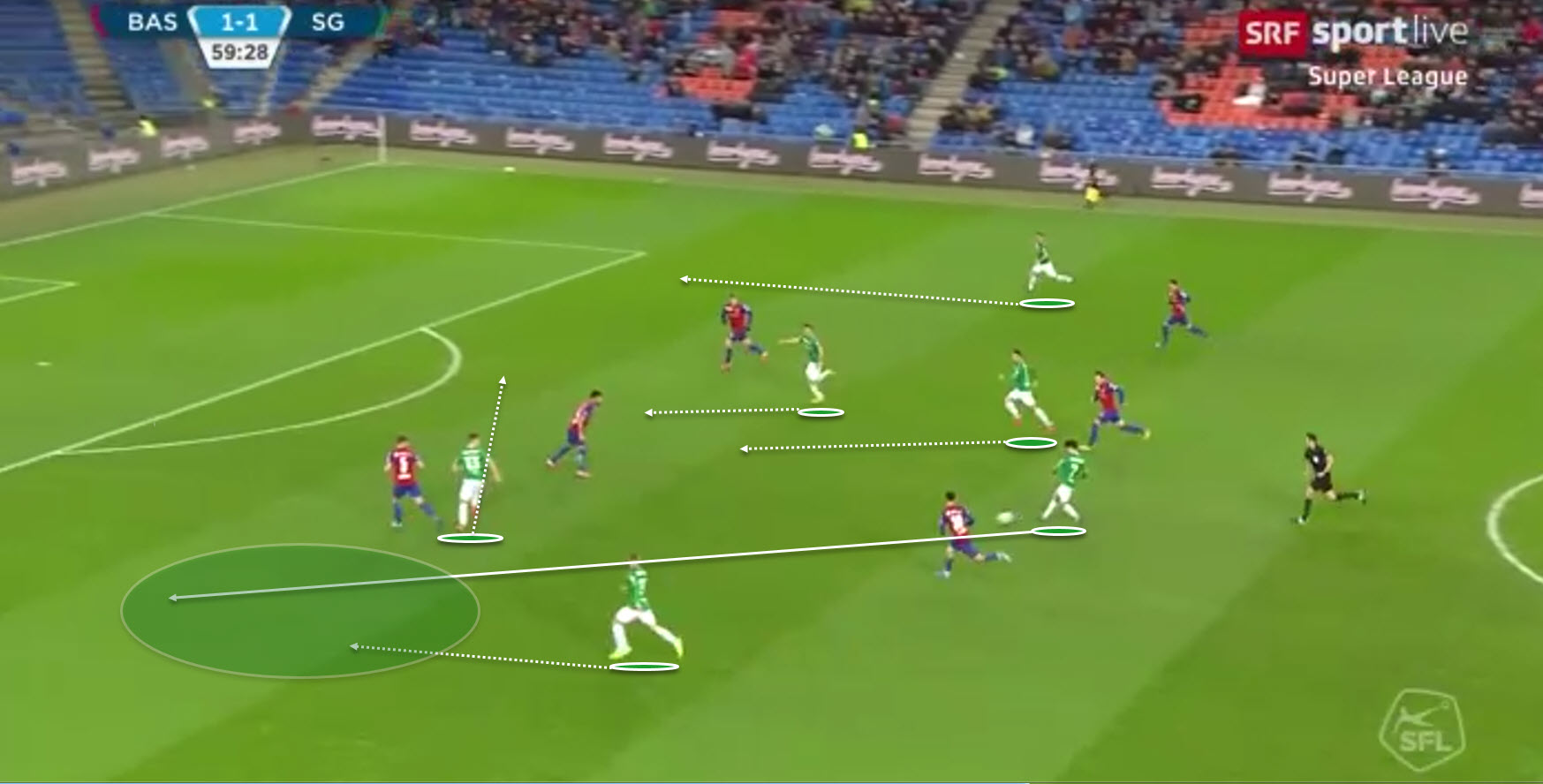 We see an example here of the kind of movements that we typically see in the second phase for St Gallen in the attacking phase. As the ball is played forward and then moves back players move from deeper areas in order to attack the defensive line of the opposition from different angles. Forward players move in order to find space and drag defensive players out of position. The spaces that these forward players empty can then be occupied by the deeper players as they stream forward. 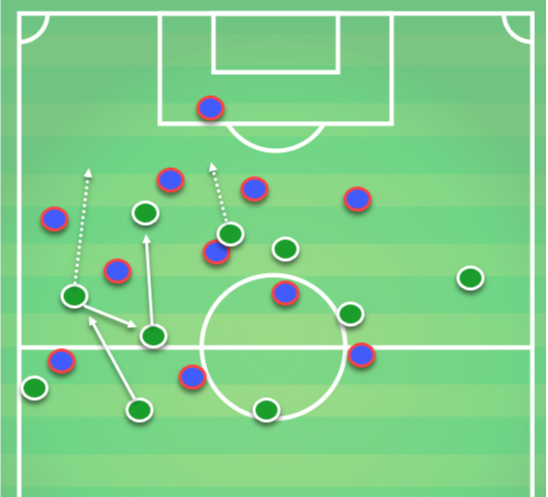 At times the option to play quickly to the furthest line is no open. As stated above this can lead to a lateral pass in order to look for an opportunity to play the forward pass down a different channel. We also see St Gallen using a concept that is heavily used by the Red Bull clubs. The up-back-through movement.

You can see an example of this above with the ball initially being moved forward to one of the central midfielders before being set back to the deepest midfielder. That player, having received the ball, then has an open lane to play forward to the attacking player.

If the opposition has time to drop into a deep defensive block early in the attacking phase of St Gallen then we see the Swiss side look to pin the opposition in a compact shape before attacking down the outsides sing the fullbacks. 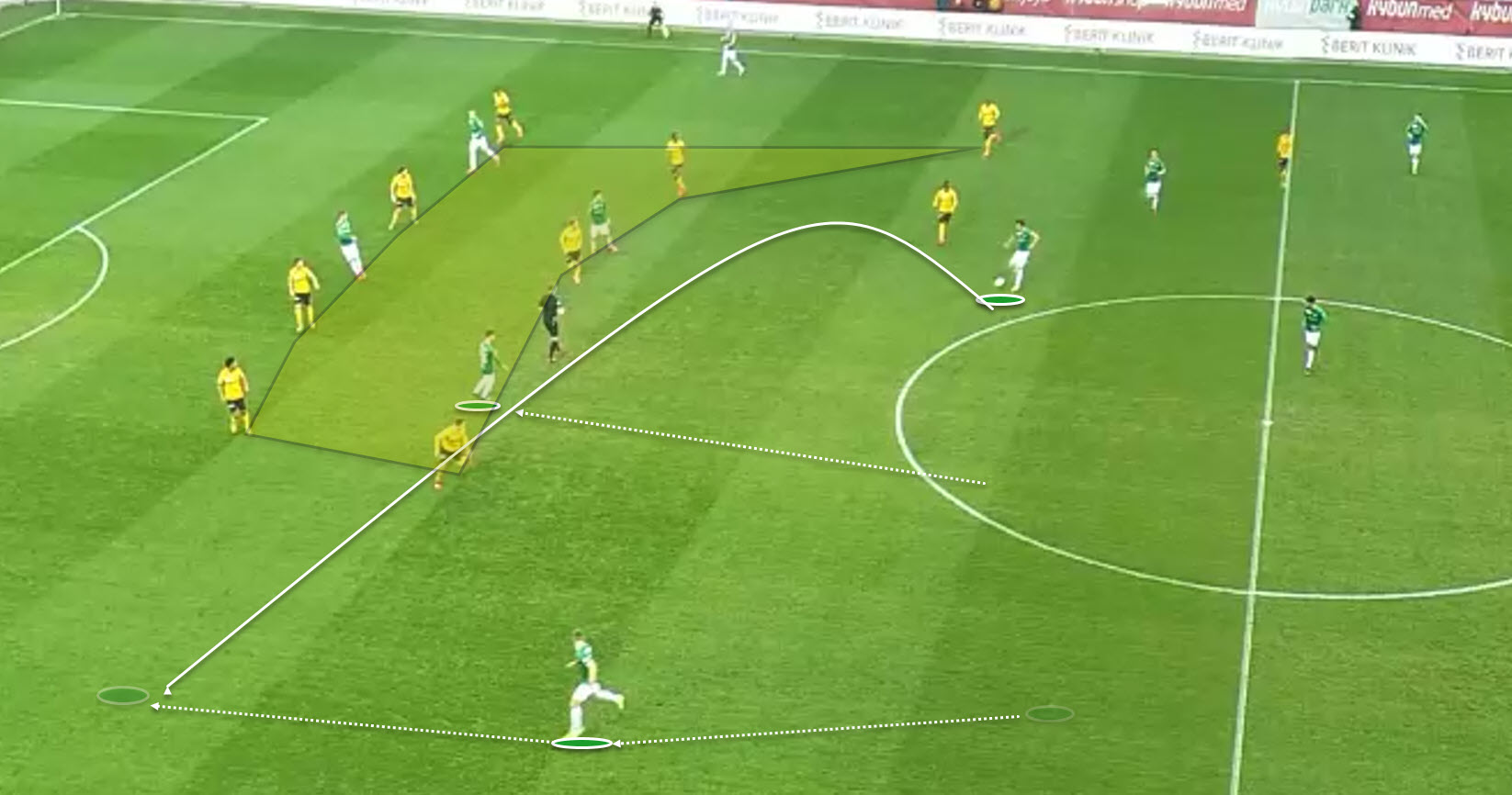 We see an example of this above as the Swiss side are in possession of the ball in the midfield. You can see that the defensive block of the opposition is deep and compact and St Gallen will look to access the space on their left-hand side. In order to do this, they have to stop the opposition wide midfielder from being able to move quickly out to close down this space.

The central midfielder makes a simple vertical run to occupy space in the defensive block and the ball is then switched across to allow the fullback to move forward onto the ball. The presence of the central player who has moved forward is enough to keep the opposition midfielder from moving out to quickly close down space.

In the defensive phase the structure that St Gallen use, the 4-3-1-2, makes it very difficult for the opposition to play through easily without resorting to more direct passes over the top. The two forwards are supported by the ‘10’ at the tip of the midfield to prevent the opposition from playing easily to either the defensive line or their ‘6’. 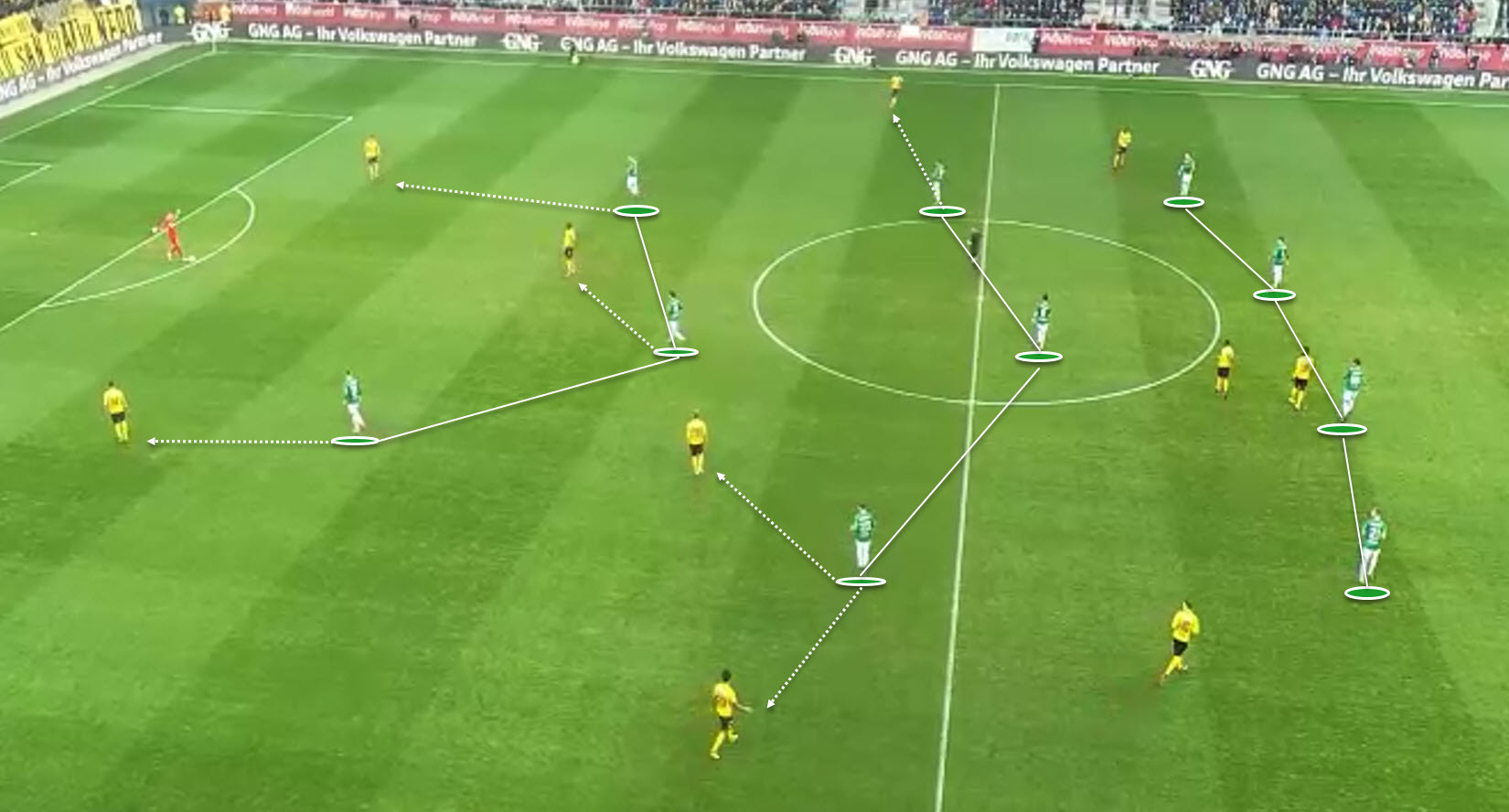 We can see here the shape that St Gallen adopts in the immediate defensive phase. You can see that the front three players for the Swiss side are positioned to be able to shut down the passing options either to the central defenders or to the deepest midfielders. Typically the three central midfielders will be positioned to cover passing options into either the remaining central midfielders or the fullbacks of the opposition as they move high.

This flexibility from the midfield line allows the four defensive players to maintain a compact line to prevent the threat of the ball being played over the top. 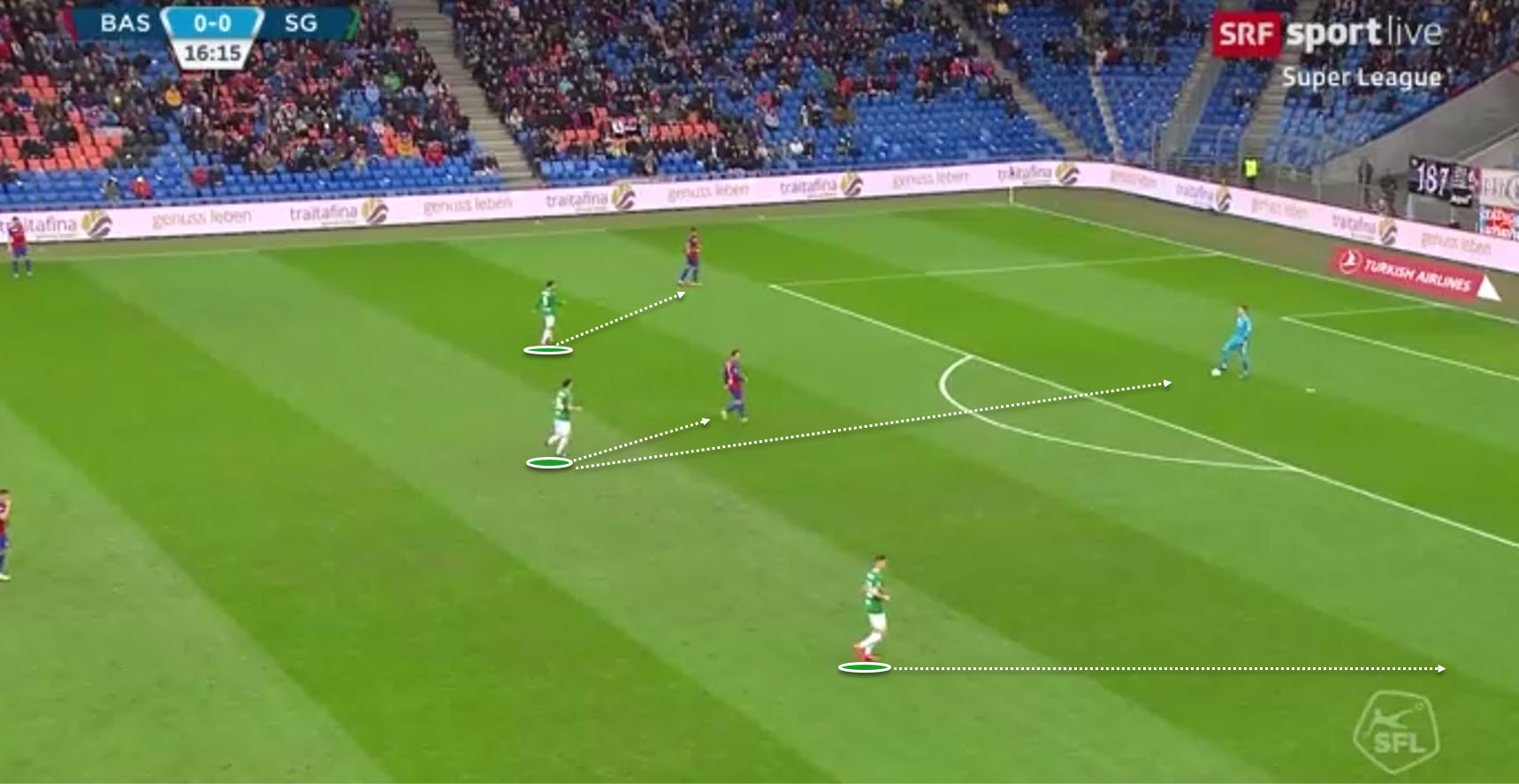 As the opposition looks to play out from the back when the situation allows the front three for St Gallen will press high to deny them the opportunity to play through the thirds comfortably. You see the typical spacing and movement profiles in the image above. The positioning of the front three allows for flexibility to press the goalkeeper as well as just covering the potential passing options.

In the immediate moment of transition from attack to defence, St Gallen will look to counter-press aggressively with a willingness to commit multiple players to press high in order to try to regain the ball as quickly as possible. The intent in this press is clear as teams that win the ball back quickly in transition close to the opposition goal tend to be able to translate this press into shots on goal.

In more established moments of the defensive phase, the front three will still look to apply pressure. The midfielders and defenders will typically collapse back to form a more compact unit to deny the opposition space centrally to try to breakthrough. 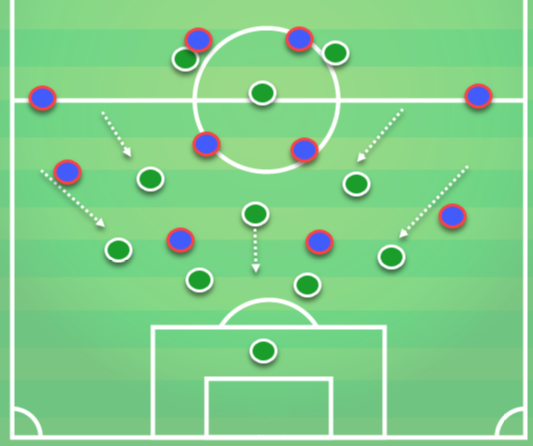 You can see this defensive shape in this example with players crashing back in order to close down the space that is available in their defensive third. By splitting their shape in this manner there is always the risk that the opposition will play through the press into the space between the two defensive units. If they do so, however, they will still struggle to find space in the final third given the defensive shape of St Gallen.

Given the success enjoyed by the Red Bull clubs, it should come as no surprise that coaches that have developed and learnt in their system should be able to implement parts of the Red Bull playing philosophy at different clubs. St Gallen have a young team and this allows them to play at a high tempo almost from the first whistle to the last.

It remains to be seen whether the season will be completed and if it is not then St Gallen may find some of their key players targetted for transfers before next season. The key will be in retaining coach Peter Zeidler and allowing him to build a team again in his image and using his preferred tactics. 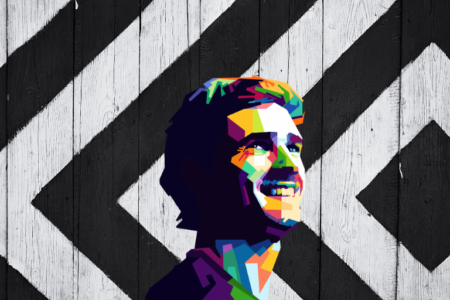