Any manager’s first-ever job can allow them to put down a marker for their tactical philosophy and how successful they may be in the future. After the sacking of Paul Tisdale in early November, Russell Martin stepped up from being a player – retiring in the process – to take the reins and attempt to guide MK Dons away from the relegation zone.

Whilst not doing an unbelievable job, Martin has still had some impressive results. A 1-0 win over Oxford United at Stadium MK and solid draws away at high-flyers Rotherham United and Coventry City respectively are certainly the highlights. Furthermore, the Scot has implemented an attractive playing-style insistent on keeping the ball on the ground and ball progression through the thirds calmly and neatly.

This tactical analysis will look at how Martin has changed MK Dons’ fortunes in League One and conduct analysis on his tactics.

Martin has predominantly played a diamond in his reign. This, therefore, means his team is quite reliant on the full-backs: Dean Lewington and Callum Brittain. Width is an essential offensive principle that needs to be present in order to optimise the attacking phase of play. Otherwise, with a 4-1-2-1-2 formation, ball circulation may become too centralised. It should be said that Martin gives his players freedom to move drift from their designated area on the pitch, with teammates rotating to try and discombobulate the opponent’s defensive shape while still keeping balance and good spacing.

Martin’s possession-based style can be seen by looking at the statistics. MK Dons have the second most short passes per game with 383, just above league-leaders Coventry City. And despite their lowly position in the table, the Dons average the fourth-highest possession percentage – it being 52.6%. Along with this, they stand third for pass success percentage, registering 76.1%.

Striker Rhys Healey, in particular, has been a standout performer and has been a leading light. Starting just 15 games with four substitute appearances, the 25-year-old has 11 goals and two assists to his name.

Influence of Jordan Houghton in the build-up phase

Whilst Healey may get the headlines for his goalscoring exploits, it can be argued Jordan Houghton plays just as an important role in Martin’s system. Sitting at the base of the diamond, the ex-Chelsea youngster has a dual role. He is the deepest protector to the defensive but the importance he holds to the MK Dons build-up is arguably greater. 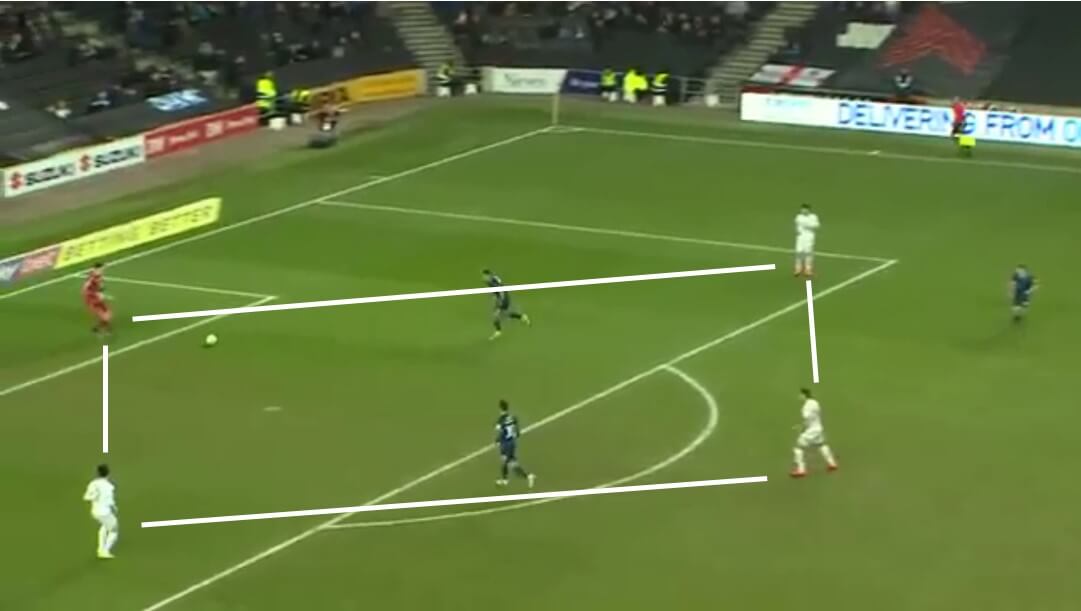 When in possession, Martin usually instructs Houghton to fall back into the defensive line to form an initial three. In the majority of cases this gives them numerical superiority, also helped when the goalkeeper is involved as an outfielder creating a diamond structure, as seen above.

The image above illustrates the general make-up of how they build up. Because League One is not the most tactically advanced, this framework predominantly allows them to gain superiority to progress the ball, trying to minimise the chance of a turnover close to their goal.

In the image immediately above you can also see how many triangles and diamonds are prominent. Creating such shapes means more passing lanes are established and it becomes tougher for the opposition to press effectively. 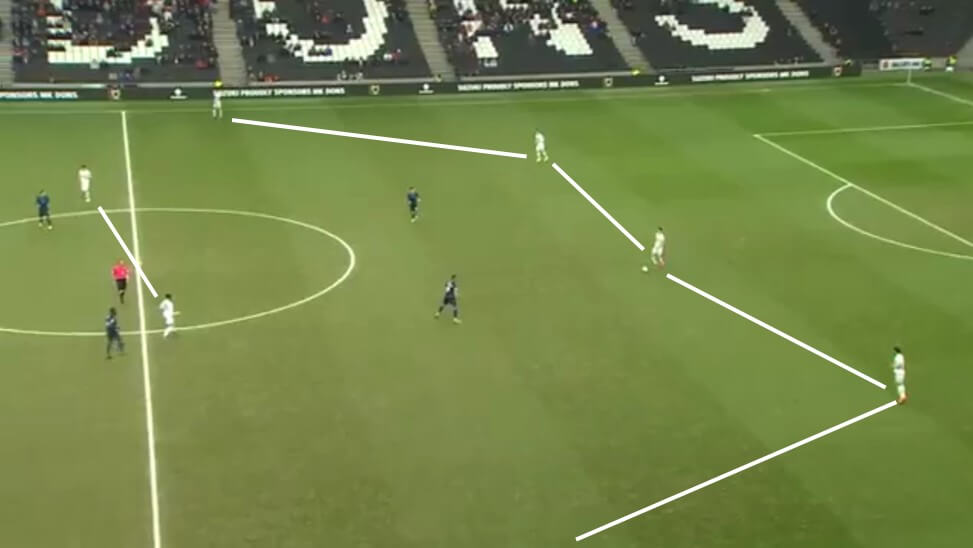 The scenario above demonstrates this in action. Houghton has slotted in between centre-backs Joe Walsh and George Williams, thus increasing the distance needed to be covered by Bristol Rovers’ strikers Jonson Clarke-Harris and Tom Nichols. This provides space for the centre-backs to stride forward in the half-spaces, the prime area for line-breaking passes. Furthermore, by emptying the pivot space you offer a free space for teammates to rotate into, thereby dragging their markers with them out of their designated positions to others to exploit. 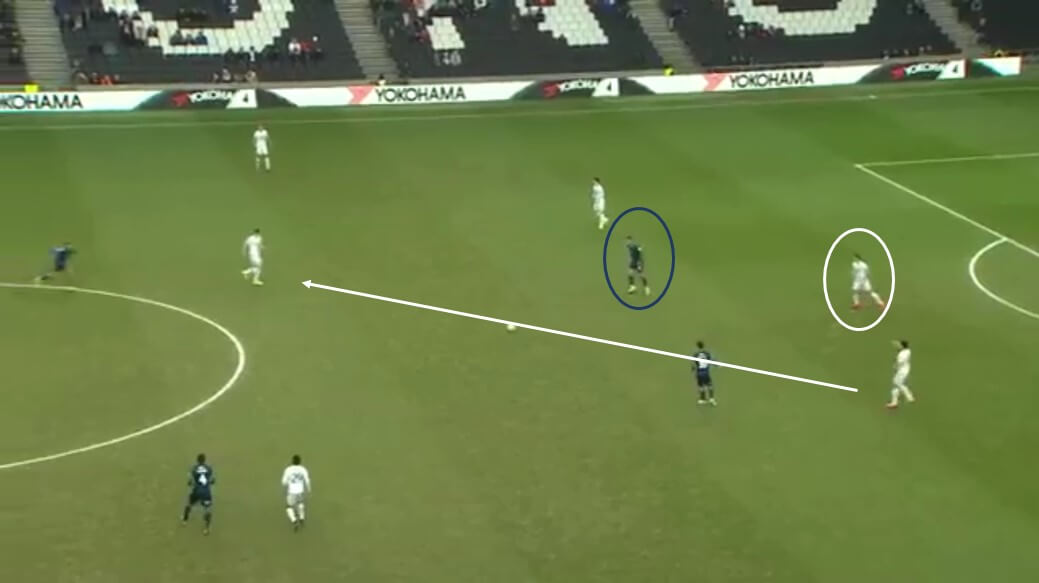 In the example above a situation like this arises. Houghton is now the deepest outfield player, letting right-centre-midfielder Conor McGrandles enter the pivot space. Houghton’s presence has occupied Clarke-Harris, opening up the central passing lane to a greater extent and giving McGrandles an easy third-man pass to centre-back Williams to evade the pressure.

Similarly, here below, we see the benefits of Houghton’s deeper positioning. Nichols has shut off the passing lane to Walsh. However, due to Houghton acting as a temporary centre-back, he is available and a potentially dangerous situation is avoided. 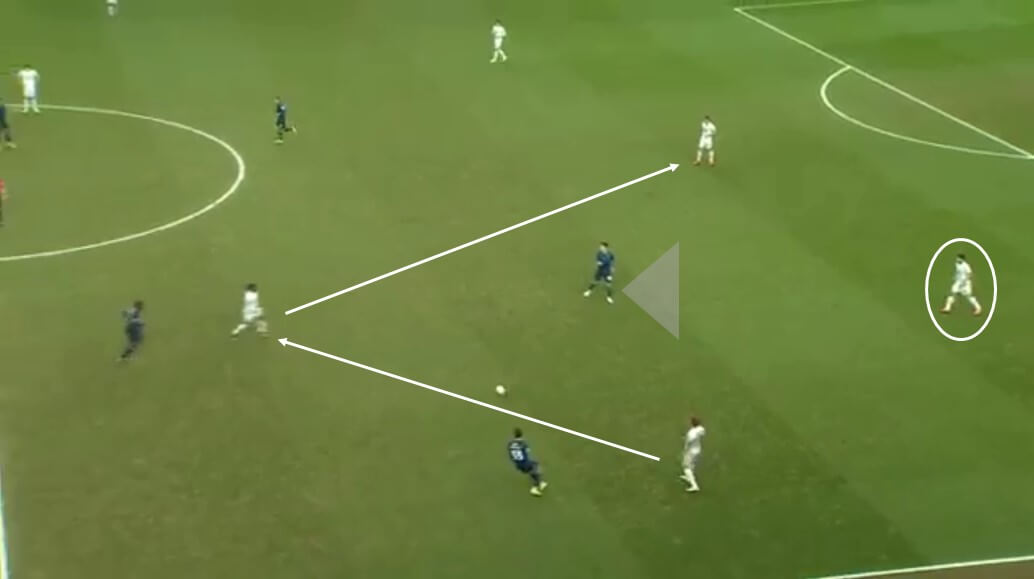 Another such example occurs below, where Houghton shows his press-resistance. A more intense press from Bristol Rovers has been initiated with midfielder Liam Sercombe stepping up and attempting to get tighter to Houghton. But despite the pressure, the 24-year-old calmly lays the ball off to Williams’ wide-right. 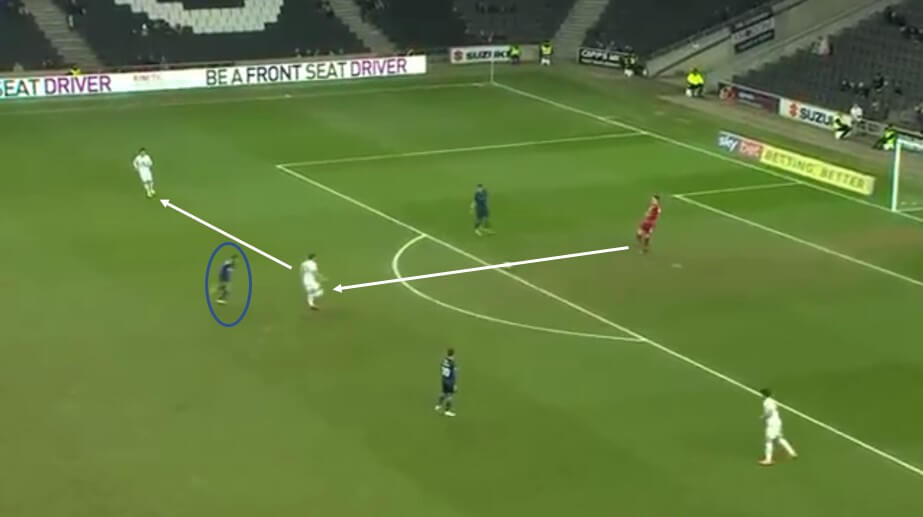 Martin also gives Houghton the opportunity to stride further forward and launch longer-distance passes. Below we see him receive centrally before identifying a gap that has appeared, subsequently exploiting it. He then proceeds to hit a lofted ball straight to Healey who has drifted into the channel, therefore giving the attack depth and width. 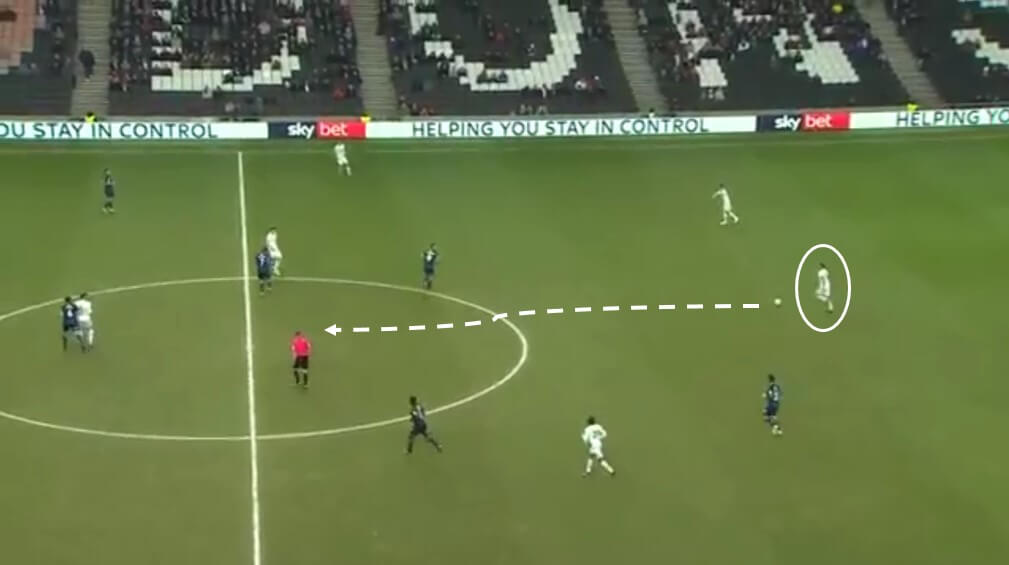 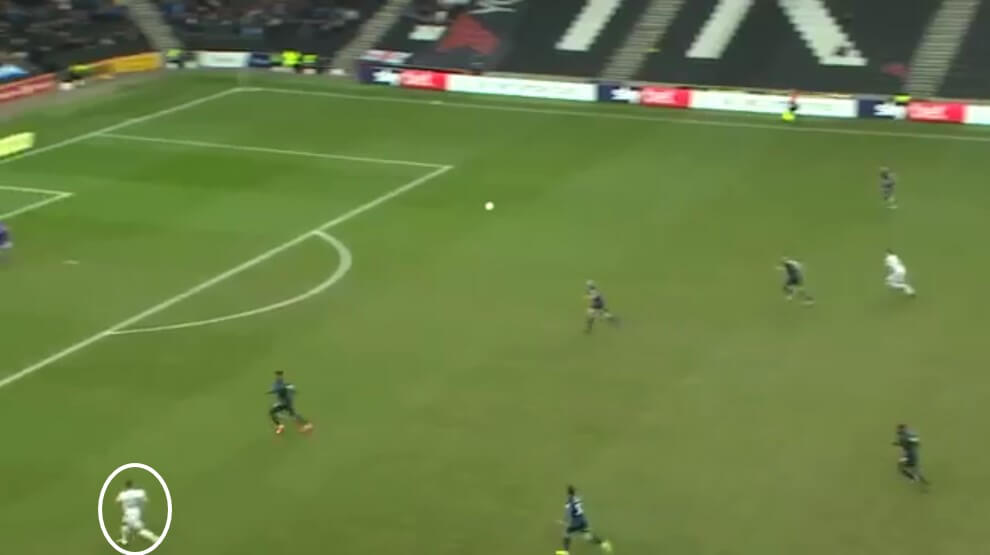 Coming through Chelsea’s academy, and only being released at 23, implies the decision-makers there believed his technical quality and tactical awareness to be relatively good. These skills help immensely for the role he plays and is part of the reason why he is a key component in Martin’s system.

Rotation as a key principle

By playing a diamond formation you are sacrificing natural spacing occurring. For example, with a 4-2-3-1 you have the occupation of wings and the central third, whereas here the midfield can become congested. This means that players need to be fluid in their movements in organising themselves in a manner that is effective and productive in attacking phases of play. There is a particular onus on the outer central-midfielders to partake in this task of ensuring adequate width. 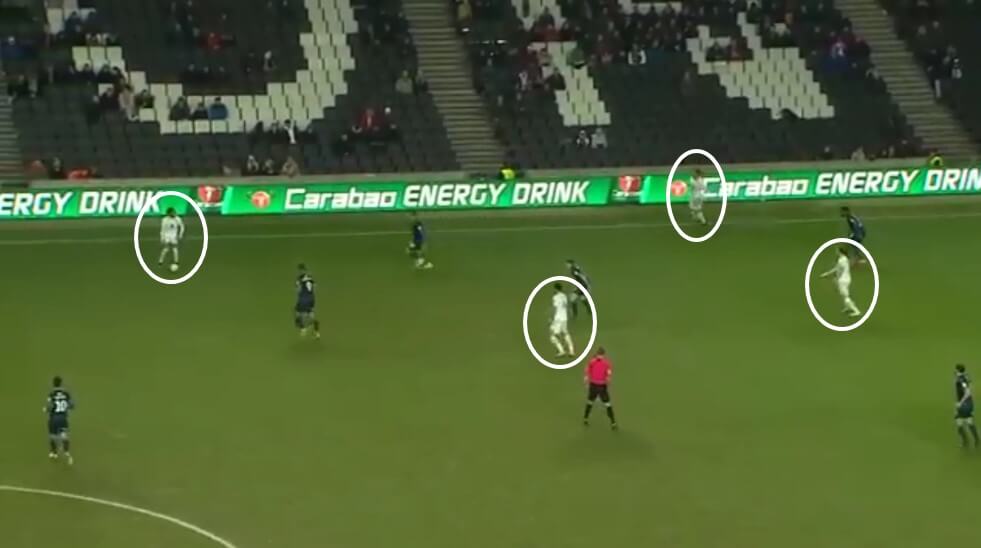 Above is an excellent example of MK Dons preventing isolation in the wide areas, while it also portrays how fluid Martin’s team can be. Indeed, the two central players pictured are left-back Lewington and centre-back Walsh. The two wider players are Striker Sam Nombe and centre-midfielder David Kasumu. The image also illustrates Lewington and Walsh being available for line-breaking passes. This demands good coaching and positional awareness from the players. 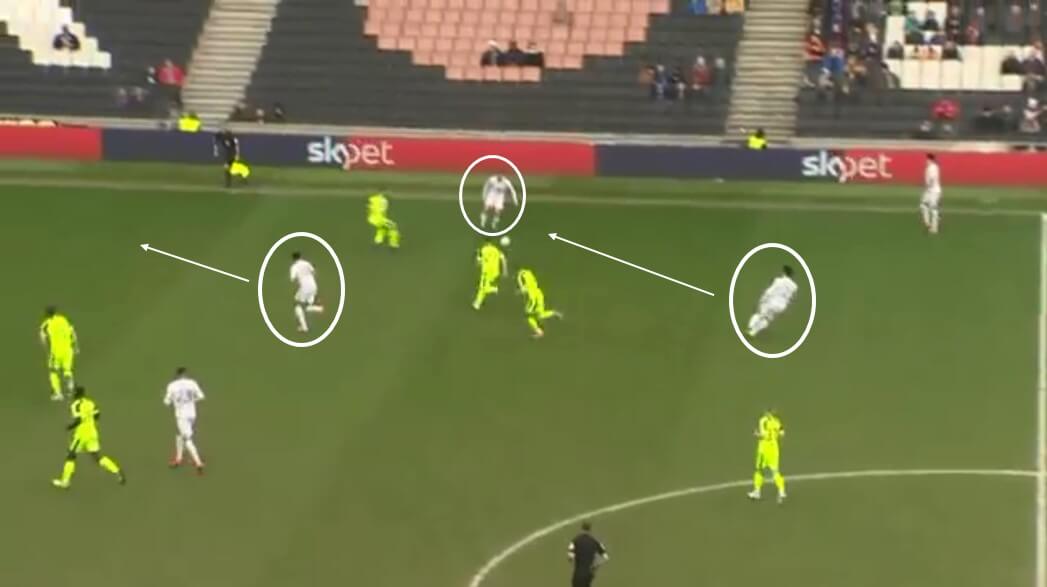 A comparable example is visible above as well. This shows right-centre-back Williams advancing and playing a simple pass to Ben Reeves wide-left. To counter Reeves’ movement inside outer-central-midfielder Louis Thompson progresses forward into the space left by Bolton’s left-back, who is pressing Reeves. Additionally, just off-screen Houghton has dropped back to fill the void left by Williams’ surge forward. 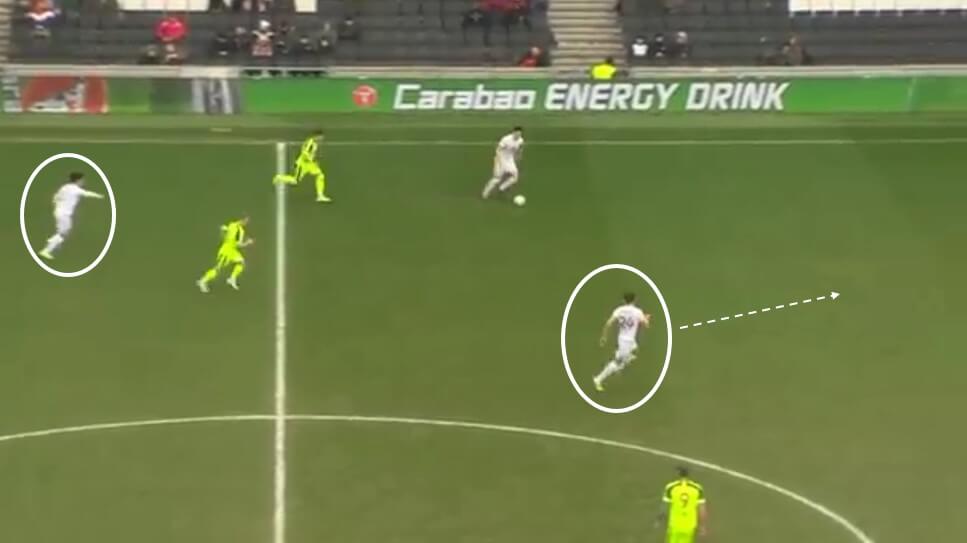 Rotations can also be utilised to maintain defensive solidity. The image above allows us to see this defensive-minded rotation in action. Williams leaves his inside-right zone, with Houghton recognizing the large gap now open and covering. Here below, Walsh has advanced far, resulting in Houghton falling back once more as well as Lewington not being very attacking. 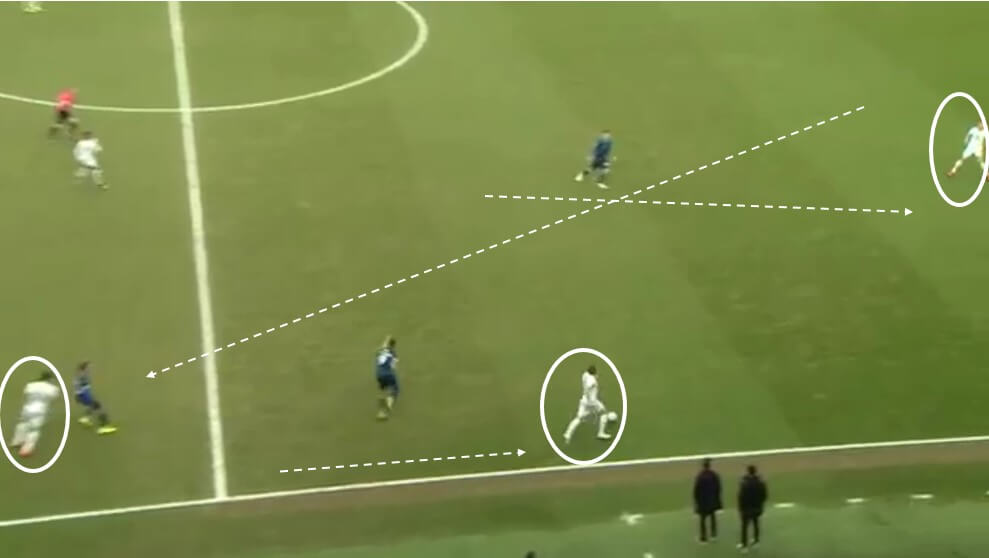 Much of MK Dons’ defending is based on compressing space. The two strikers, in addition to the attacking midfielder, offer a press that is likely to be effective. The strikers can match up to two centre-backs while the 10 covers central passing lanes. The scheme naturally guides the ball into wide areas for a pressing trap.

When in these wide positions there is less space to operate in. Part of Martin’s defensive approach when playing a diamond formation is falling down upon the opponent in wide areas after initially encouraging them there. Either a turnover can then be forced depending on the aggression of the press, or making the opposition play backwards into a less dangerous zone. 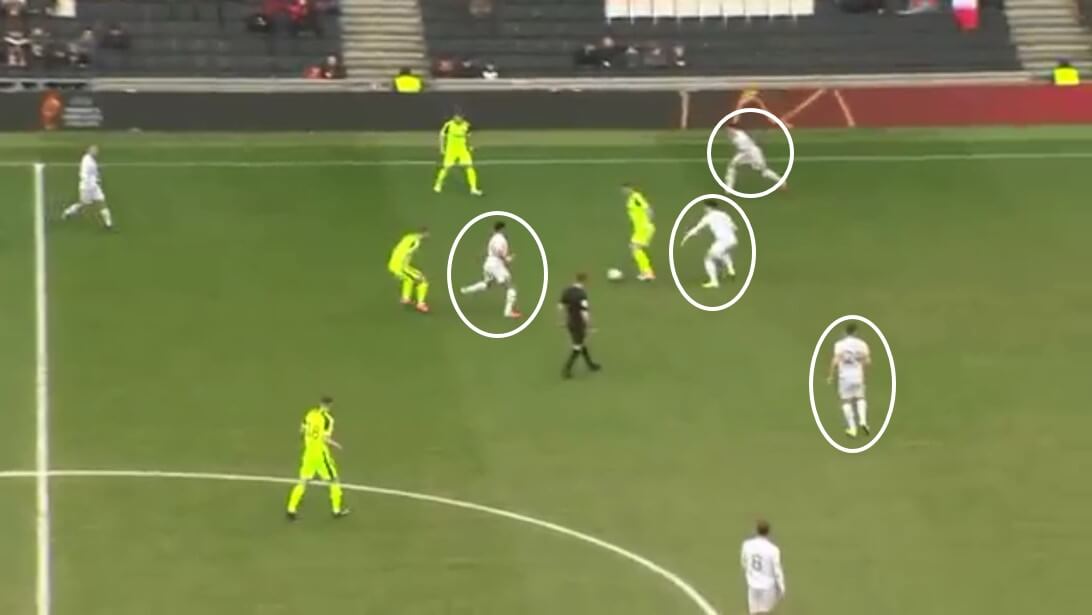 In the example above Bolton have progressed play into MK Dons’ half. But this is where they fall upon them and apply immediate pressure, thereby preventing options inside. Williams is pressing the ball-carrier while Thompson and Houghton are covering more central options, plus right-back Brittain is ready to engage. The below situation shows something similar, whereby the ball is on touchline and players are then engaging. 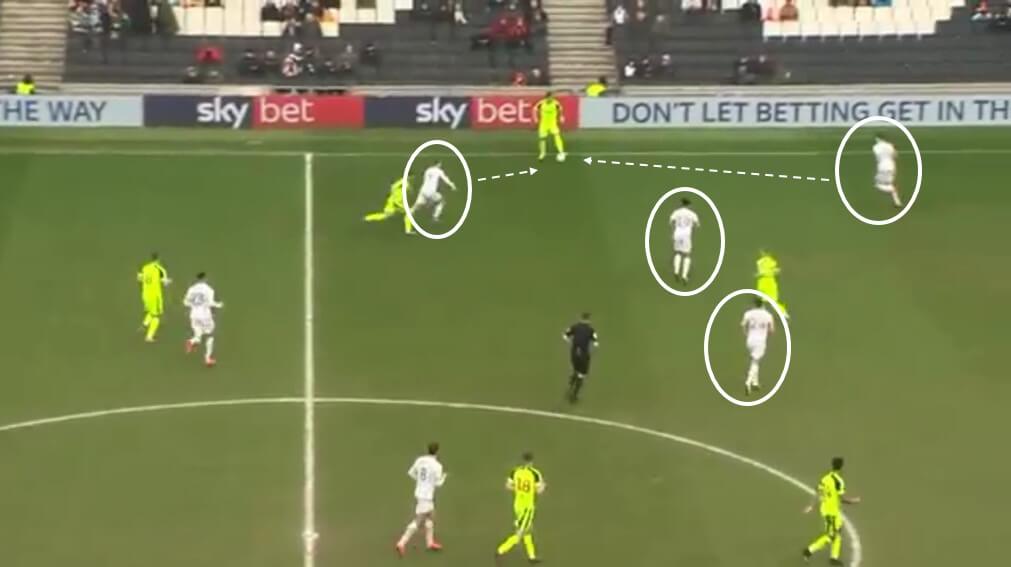 Below shows a scenario along the same lines but as soon as the pass out-wide is executed a press is launched. Here, the Dons are not in their regular shape but the principle remains the same. Forward Carlton Morris begins by making a curved run, thus seeking to stop the return pass. Thompson charges towards the receiver, consequently seeing the ball go back to the keeper and the plan succeed. 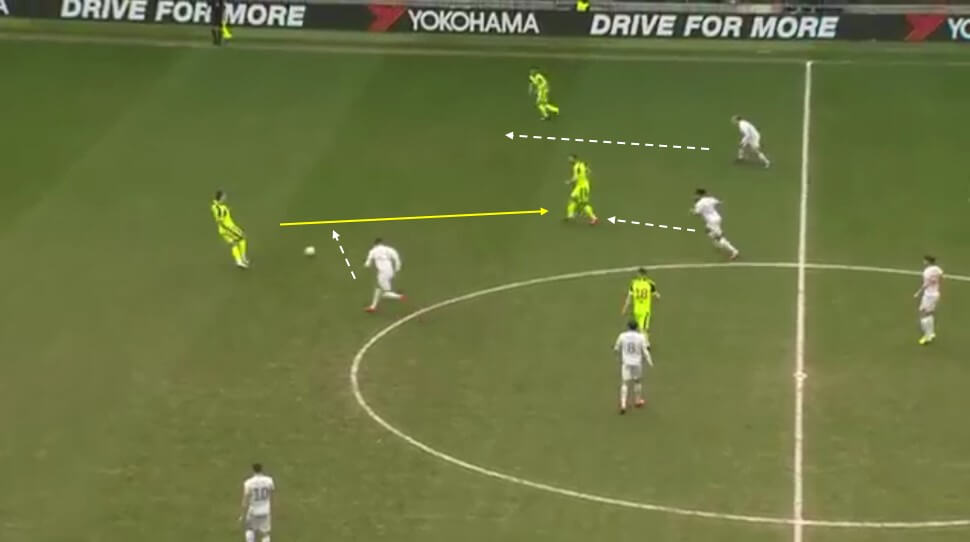 When pressing in wide areas, compactness is vital. A neat pass can be played inside, potentially on someone’s blindside, and because you have overly shifted to one side, they may now be the possibility for an overload in favour of the opposition. The examples shown were performed well but this needs to be done well consistently, with proper coaching from Martin and his team. Considering they currently concede 15.6 shots per game, the third-worst in the league, this may be a point in which they need to improve on to avoid relegation.

Overall, I believe Martin has done a decent job so far in his first managerial role. Transitioning from being a player straight into management, while demanding respect from the players that were previously his teammates, is commendable. The Scot had no pre-season, with the threat of relegation very real. Additionally, he has had to lead a change in tactical identity to something more possession-based.

Whenever football resumes, I’m sure Martin will look to make his defensive unit more assured and organised. Easing the reliance on Healey for goals would also make the Dons a more unpredictable attacking entity. 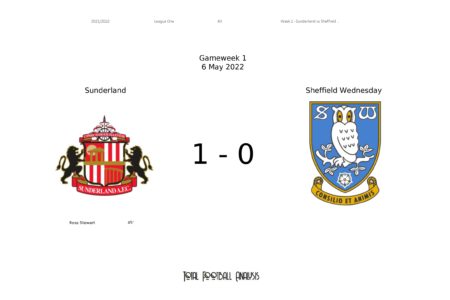 Saturday evening saw Sunderland secure an important 1-0 victory against Sheffield Wednesday in the Play-offs, Semi-final leg 1 in the […]