Portsmouth hosted Rochdale in a fixture that was moved to the Friday evening following Portsmouth’s progression in the FA Cup. This tactical analysis will focus on the tactics used by both sides as they aim for a strong finish to their campaigns in EFL League One.

With a tough run of fixtures, Rochdale haven’t won away from home since New Year’s Day whilst Portsmouth were hunting a tenth successive home win at Fratton Park in all competitions. This analysis will focus on Portsmouth as they close in on promotion whilst Rochdale are searching for form to secure another season in EFL League One. 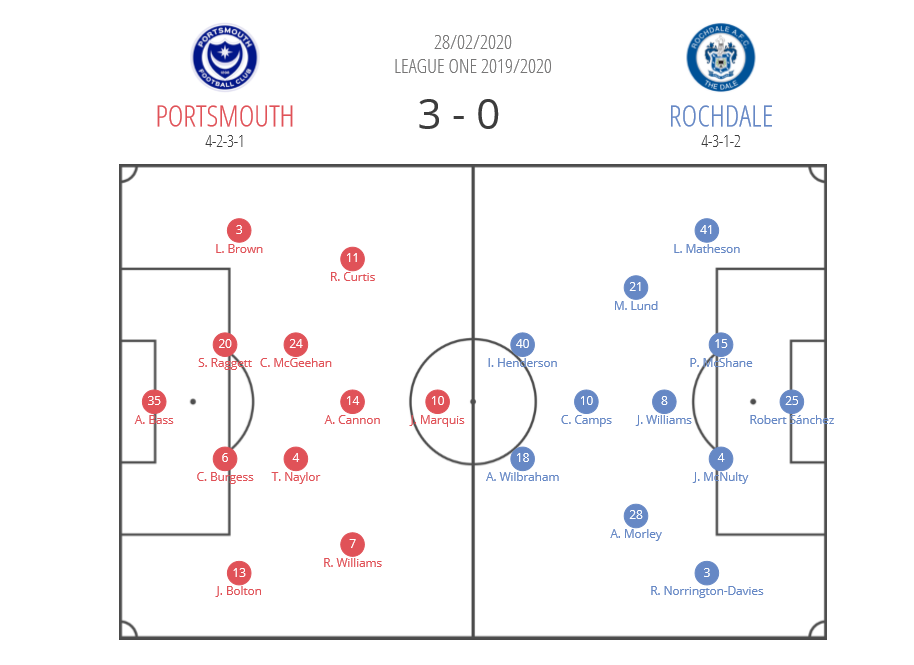 Portsmouth made two changes from their win against MK Dons in the week but retained their familiar 4-2-3-1 formation. McGeehan comes back into the side in place of Ben Close with the manager opting to play him in a defensive midfield role rather than his more familiar role closer to the offence. McCrorie makes way for Bolton to ease the burden on the fullbacks with a tight run of fixtures.

Rochdale made four changes from their 2-1 loss against Coventry last weekend. Most notably, Wilbraham earns a start following his goal in that fixture whilst Baah and O’Connell are rested following injuries sustained against Coventry. Rochdale lined up in their familiar 4-4-2 diamond formation.

Portsmouth transition to 4-1-4-1 on the offence

With the addition of McGeenhan to the squad in January, Kenny Jackett has opened up his attacking options in the number 10 role. Having opted to play Mcgeehan deeper in a more defensive role within a 4-2-3-1 formation, he provides a better more attacking option when Portsmouth have transitioned from defence to offence. Compared with the defensive nature of Ben Close, McGeehan allows Portsmouth to have more aggressive offensive tactics. 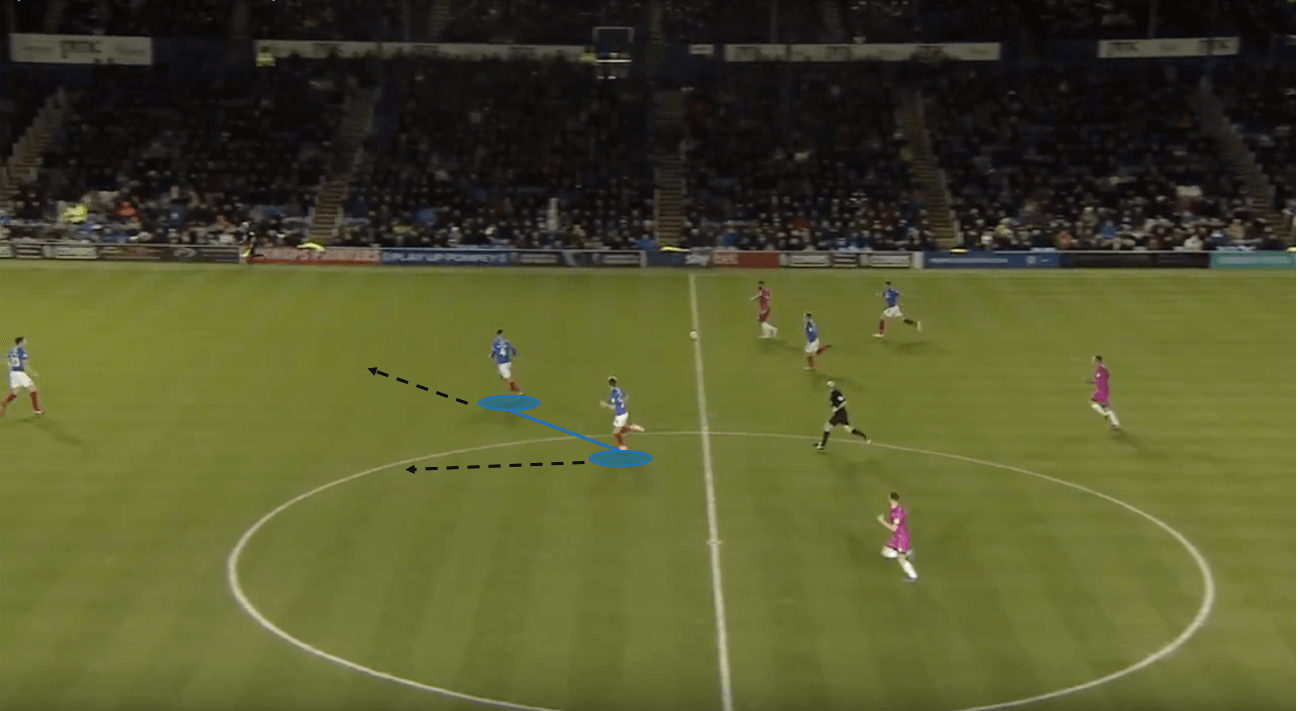 In the defence, Mcgeehan moves to a central defensive role which is compact alongside Naylor. This allows Portsmouth to press the ball in the centre of the field without losing the defensive shape of the back four. In this example, the ball is lost in the top third and McGeehan transitions back to the defensive posture with speed. This slows the play and allows time for the wingbacks to recover. Rochdale are unable to gain momentum to push into dangerous positions within the final third. 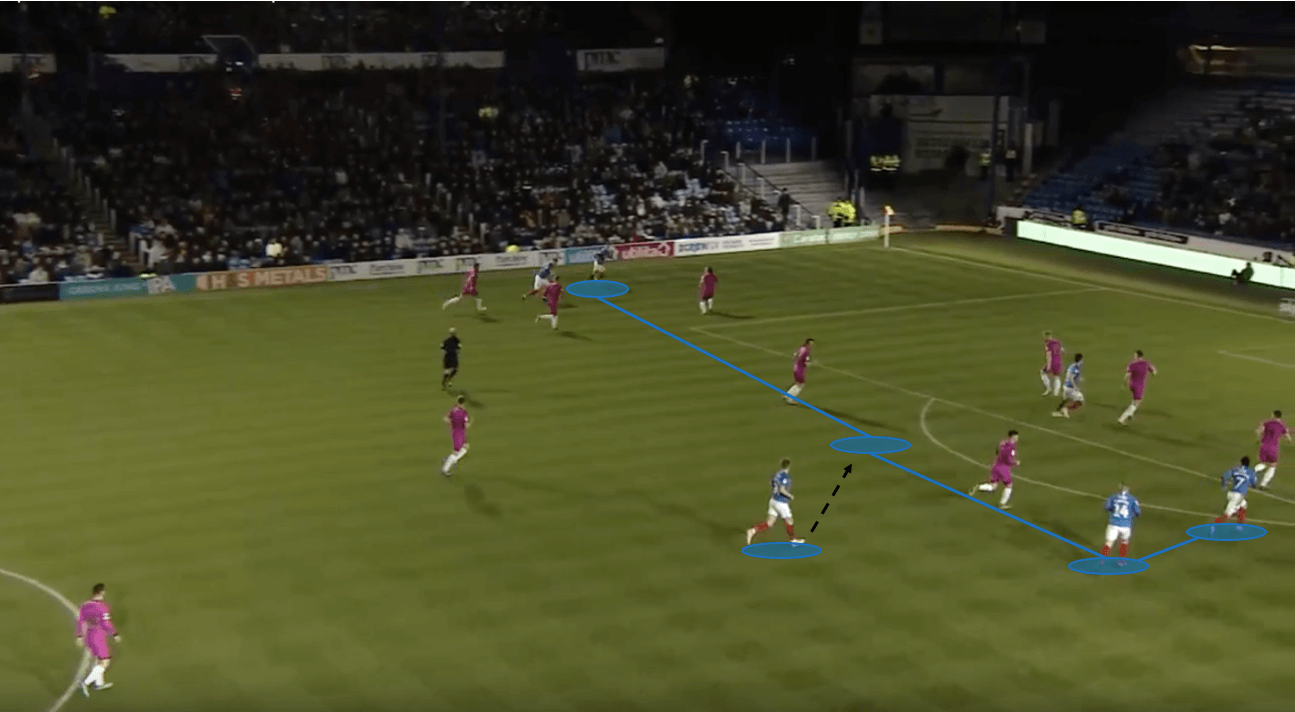 On the offence, McGeehan has the freedom to roam and exploited Rochdale’s disciplined positioning in the first half. In this example, he is moving at pace to exploit the space and is another option to strike from the edge of the box. Having scored from this position in the recent Leasing.com Trophy semi-final, he offers an additional offensive option. The 4-1-4-1 on the offence is an evolution of Jackett’s tactics and offers tactical freedom for them to push a midfielder higher up the field.

Rochdale weren’t able to offer much to the offence with only an xG rating of 0.3 from nine chances. This tactical analysis highlights their build-up play from deep areas and the support that Sanchez provided as a sweeper keeper.

Rochdale’s high line supported the midfield and the offence in the final third of the field but would have been susceptible to long balls were it not for Sanchez’s positioning.  More often than not, he was positioned outside of the penalty box and able to close space from the long balls. Portsmouth’s tactics changed in the second half to include slower build-up play from the flanks. 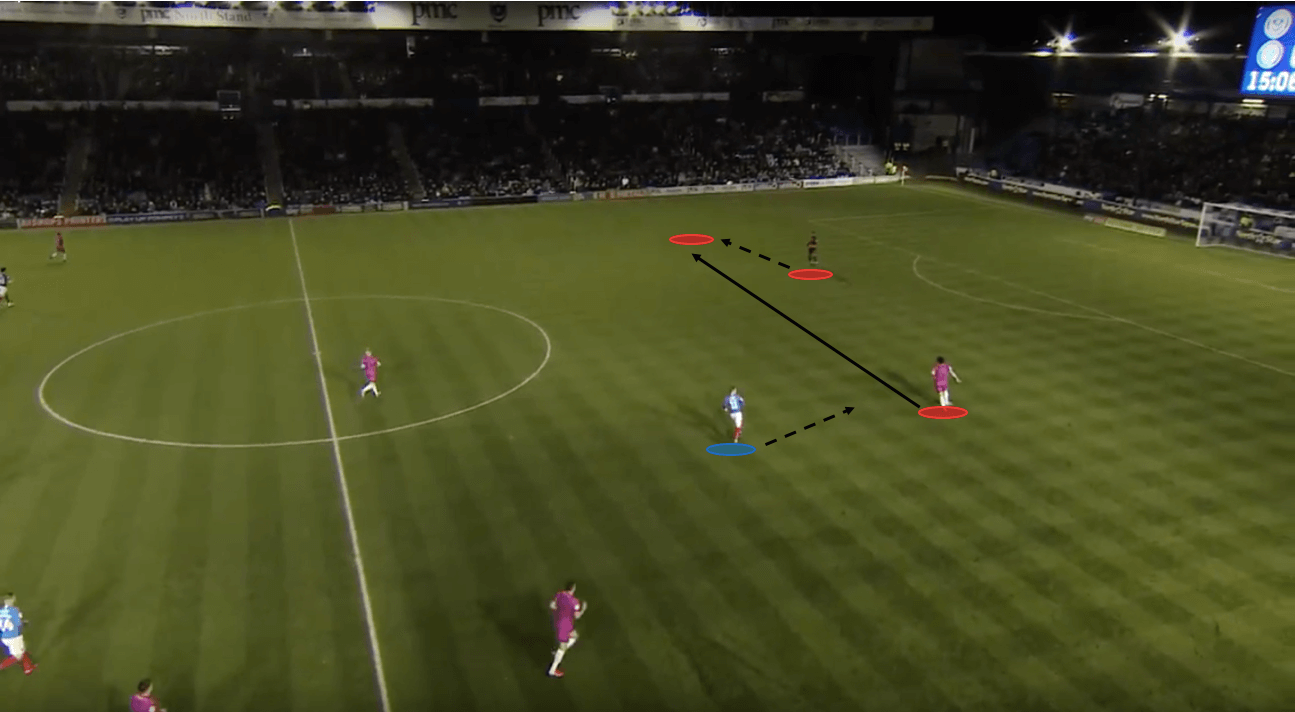 Sanchez supported play by using positions that provided him with more time to push the long ball up the field. As shown, Sanchez pushes to the right flank to maximise the time on offer to support the offensive play. Sanchez supported the play well but the tactics offered little reward with the ball being played long 28 times with only a 50% success rate. The shorter ball was used 14 times but wasn’t able to yield better results in the build-up play. This distribution was mostly triggered by Portsmouth’s high press that forced Rochdale’s hand.

Steve Seddon’s support to the offence

Since Seddon’s arrival on loan from Birmingham in January, he has been the star player for Portsmouth, contributing to success at both ends of the field. On the offence, he has been praised for both his support in the wide areas and for his deliveries at set-pieces. This analysis has highlighted him as the key offensive player for Portsmouth and was the catalyst for Portsmouth’s second and third goals when he was subbed on in the 54th minute. 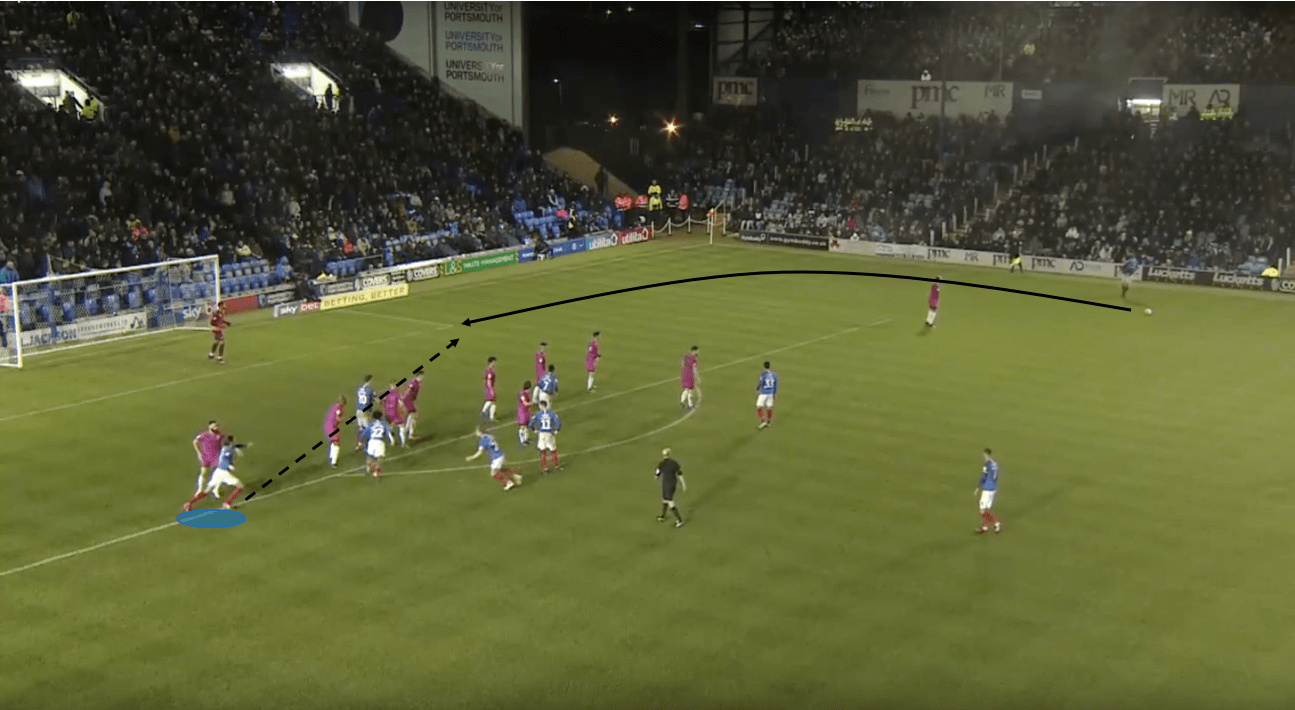 From set-pieces, his low deliveries are very difficult to defend against. In this example, the ball is delivered into the box at the near post with a flat trajectory that meets the head of Christian Burgess before being buried in the back of the net. The pace of the ball is impressive and beats the defensive line. Prior to Seddon’s arrival on the south coast, Burgess hadn’t yet scored this season but since then, he has netted on four occasions. Portsmouth were lacking danger at set-pieces but now they are a team to be feared from those positions. 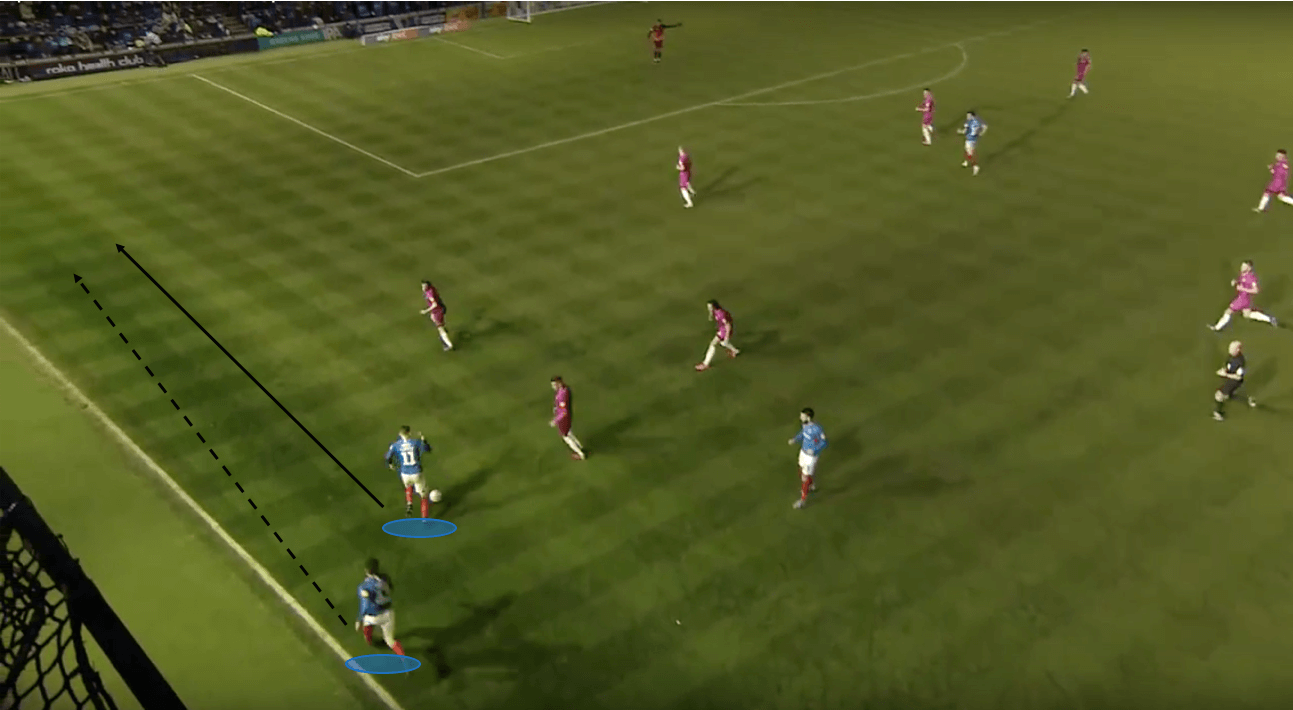 From wide areas, Seddon supports the play so well. His interaction with Ronan Curtis on the left flank is the most dangerous area of the field for Portsmouth. Up until Seddon’s arrival in the second half, the right flank was the more dangerous area with Rochdale’s Matheson closing Curtis down well and stopping the supporting runs from the Portsmouth wingback. Seddon offers an attacking flair to EFL League One football that is rare. More often than not, he is the most dangerous player on the field for Portsmouth. This was confirmed with his strike in the 78th minute to put Portsmouth ahead. For a young player with limited first-team experience, he has the composure and the strike to contribute to the goal tally.

This tactical analysis concludes that Rochdale offered few offensive tactics of merit and were rigid in their performance. Defensively, they used space well and frustrated Portsmouth for large swathes of the match – it was only the introduction of Steve Seddon that broke the deadlock.

Portsmouth were the more creative side from the start and were able to amend their tactics to break down a frustrating Rochdale defence. Jackett demonstrated the development that this side has made and was confident to deviate from his proven 4-2-3-1 to a formation that better resembled a 4-1-4-1 whilst on the attack.