England were, statistically speaking, the best team in the World Cup group stages with seven points and a goal difference of plus seven. Their impressive 3:0 win over Senegal in the first round of the knockout stages solidified their impressive form. Against tough opponent France, the dream of bringing it home this year ended.

In this tactical analysis, in the form of a team scout report, we’re going to be taking a look at what England was doing well and why a shift from the 4-2-3-1 to the 4-3-3 might be Gareth Southgate’s best decision as head coach of the Three Lions yet, despite the loss against France.

In their three group-stage matches and in the round of 16, England have scored 12 goals and have only conceded twice. However, as shown in this analysis, it is the way England have been scoring that tells a completely different story to where England were at during the previous World Cup. In fact, in 2018, England scored nine of their 12 goals from set pieces. In this World Cup, England have scored 10 goals from open play with a much quicker attacking style of football that gets them in behind a lot more often.

Let’s take a look at what’s changed and why a change in tactics has made them a lot more dangerous. Firstly, the stats show us that England like to hold the ball for the majority of the match while their possession is definitely not as high as Spain’s 77%. England averaged 65% possession (third highest in the competition). While England started the World Cup with a 4-2-3-1 system and an impressive win over Iran in the opening fixture, a lacklustre performance against the USA was deemed too cautious and defensive.

Therefore, a switch to the 4-3-3 formation was made with big differences in how the team would look to move up the pitch. Secondly, the replacement of the Chelsea duo Mason Mount and Raheem Sterling for Phil Foden and Marcus Rashford or Jordan Henderson certainly made England much more dangerous up top. And, the decision to play Borussia Dortmund‘s Jude Bellingham as a box-to-box midfielder rather than a holding mid allowed England to have a much more threatening and dynamic attacking line.

The big difference between the two systems is the amount of freedom England players have in the centre to rotate. While in a 4-2-3-1, England would often end up having too many players in the same position. Given Mason Mount’s starting in a more central position, it meant Tottenham‘s Harry Kane had less space to drop off the defensive line and act as a false-9. In turn, meaning there was less space up top for Sterling and Arsenal’s Saka to move inside and subsequently free up space for the fullbacks to push up.

Eventually, this is what seems to have led to England’s lacklustre performance against the USA as the whole team looked locked in place with little movement up top to disrupt the defensive block. 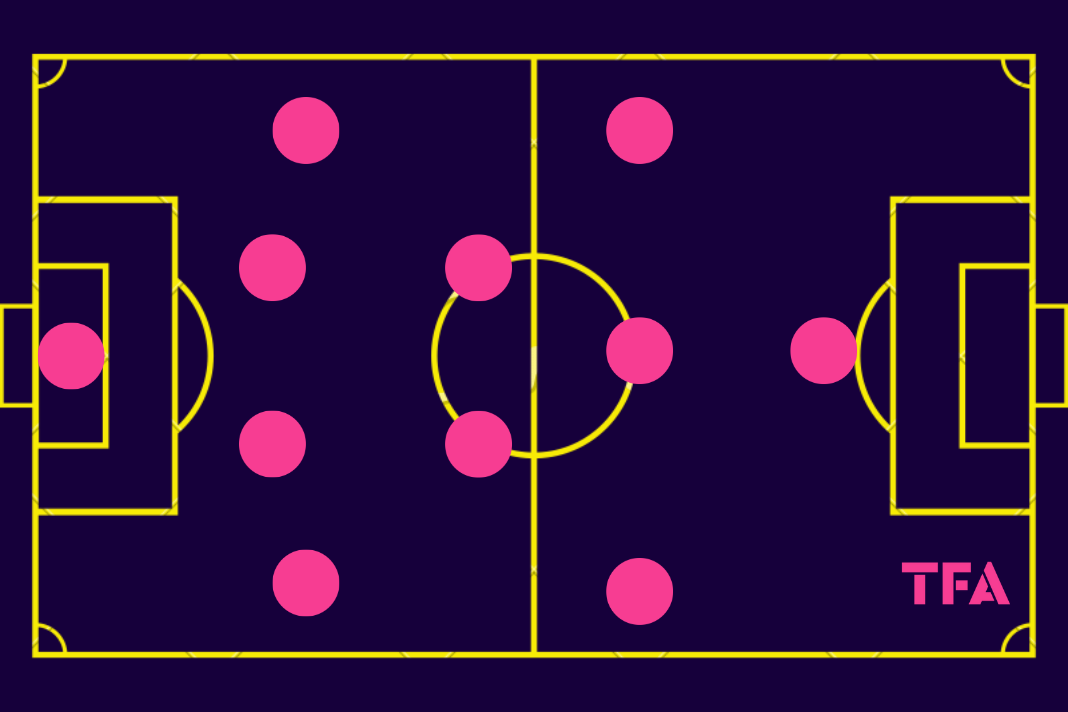 However, since switching to a 4-3-3 formation, England have suddenly unlocked a lot more space to work with. The absence of a playmaker in Mason Mount means Harry Kane has a lot more freedom in the centre. In turn, this means that there is more space for Saka and Rashford and for either Foden or Bellingham to move up on the defensive line. 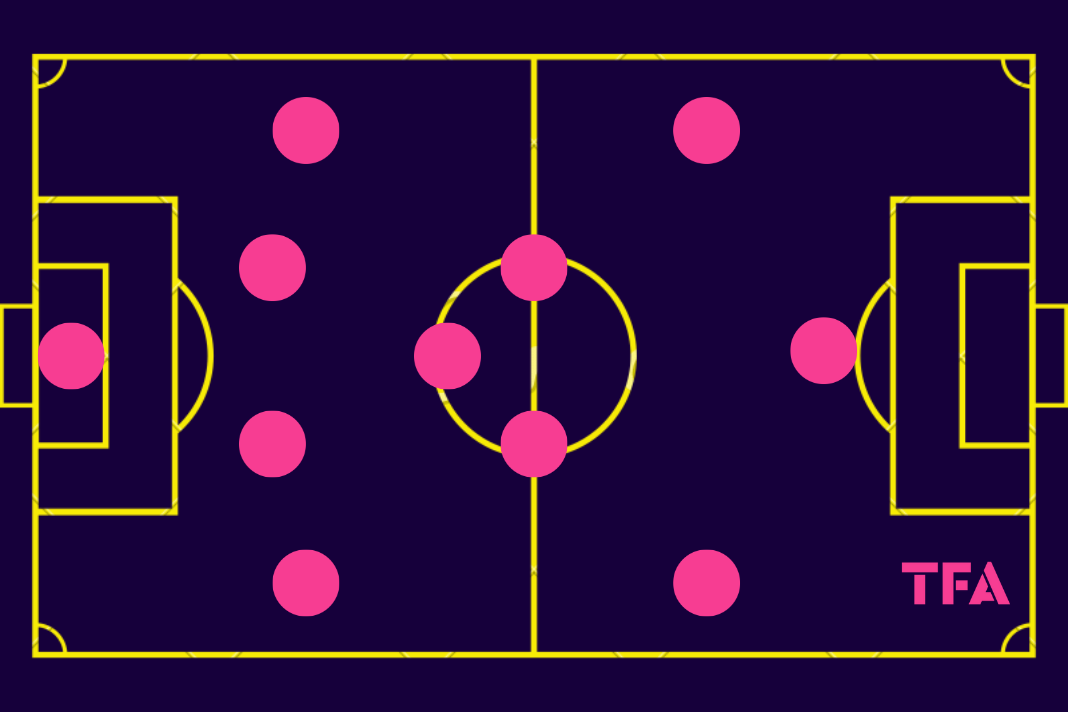 Having only one holding mid also allows England to be a lot more creative during build-up play. In the 4-2-3-1, England would often revert to a back three during build-up with one fullback pushing up on the flank and the double pivot in the centre forming a 3-2 shape. While this is a great base to launch attacks, it would often mean the opposition could tighten their shape to stop any balls going through the middle and would force play out wide.

However, the lack of a box-to-box midfielder meant the wingers would often be isolated on the wing and England would often be forced to rotate and look for another option. 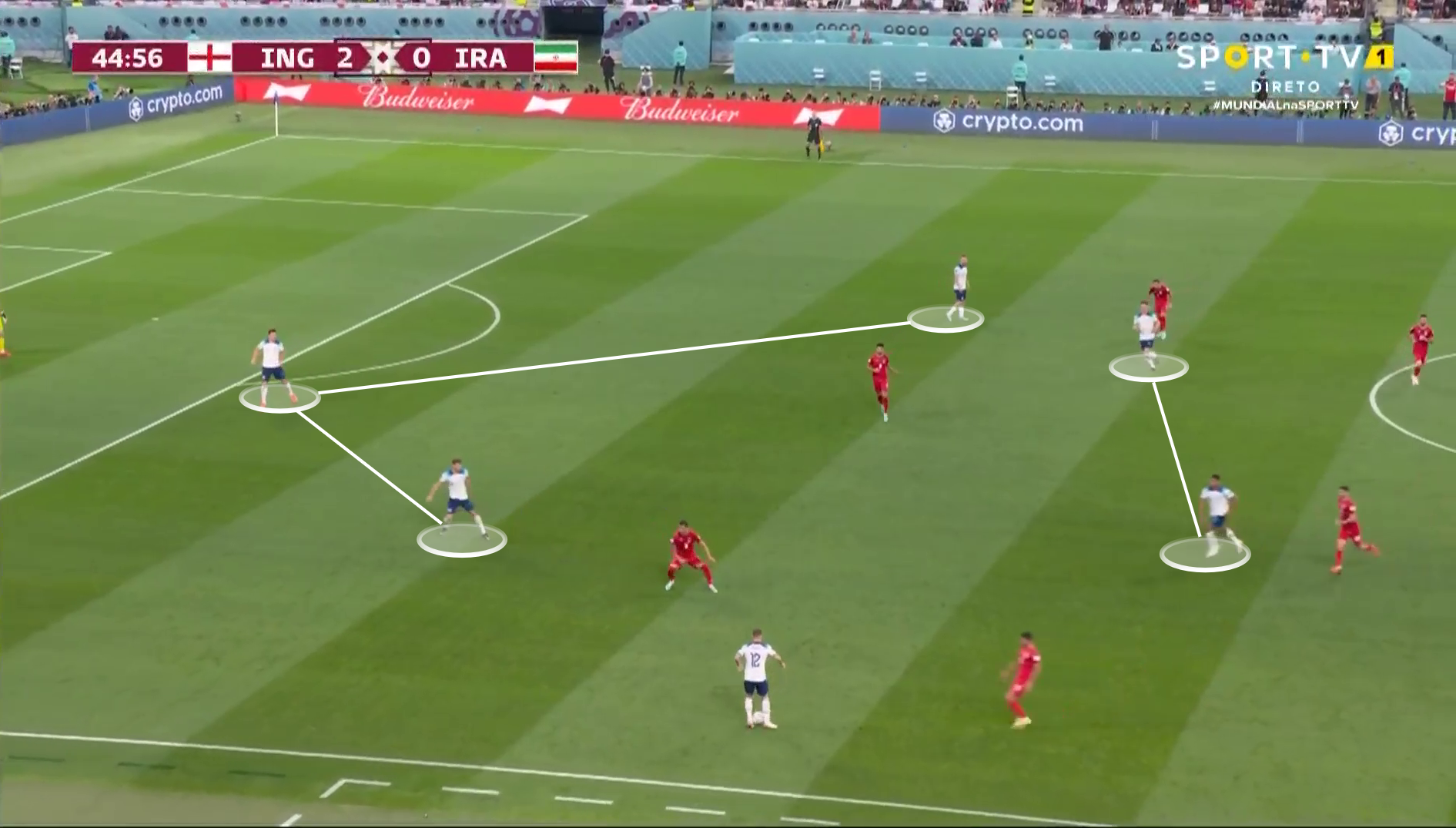 Since switching to a 4-3-3, England’s build-up is much more resemblant to that of Brazil’s with both fullbacks out wide and only one pivot in the centre forming a 2-3 shape. This deeper and wider build-up structure meant the opposition would often stretch the cover passes out wide meaning there was more space for a central pass into Bellingham or Henderson. 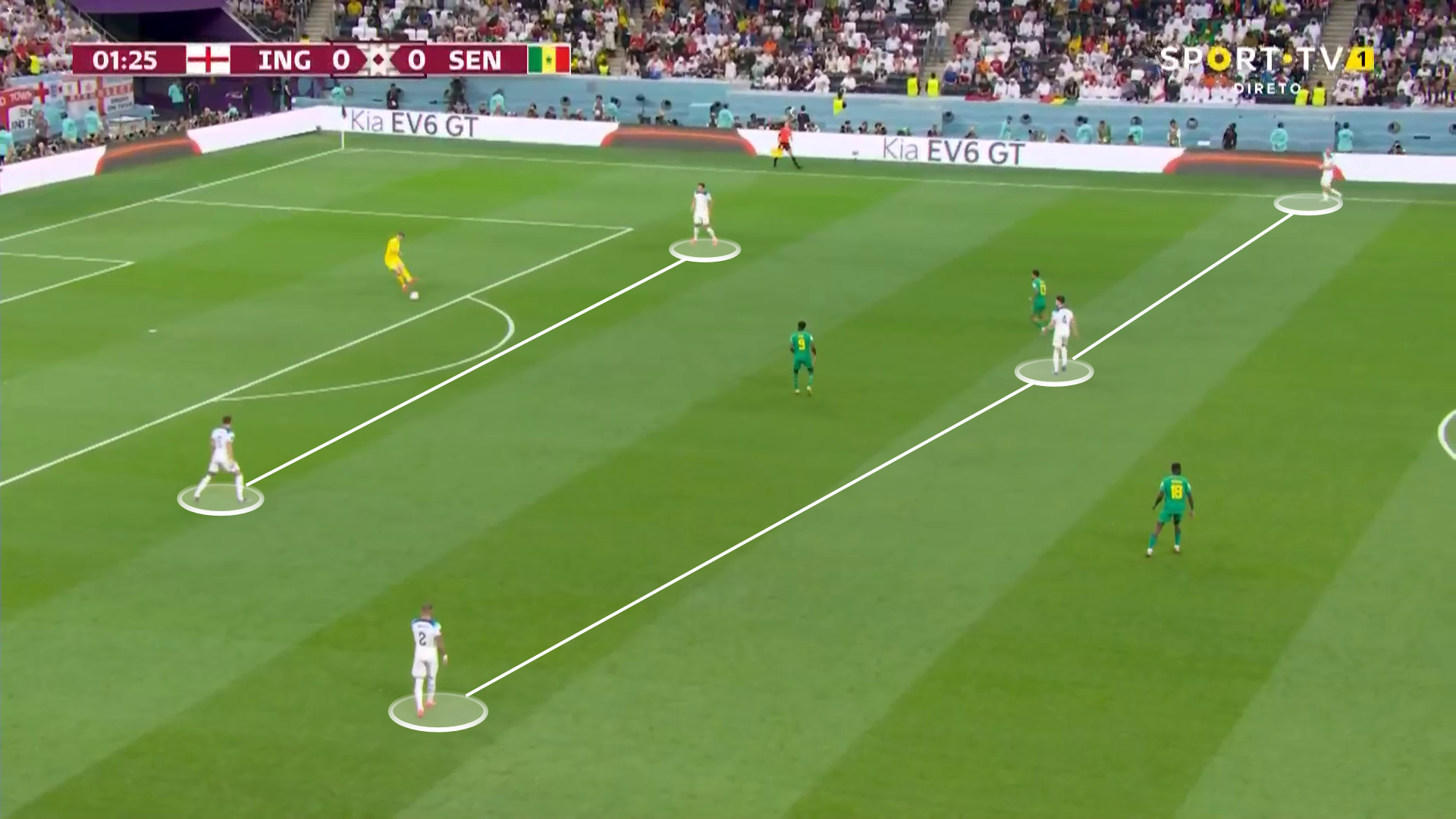 The times when opponents were able to stop these central passes, England would simply move out wide and forward into either Saka or Foden who could drift inside or attempt to dribble past the fullback. We can see an example here with both, Henderson and Rice, being marked but with lots of space for a pass forward into Saka. 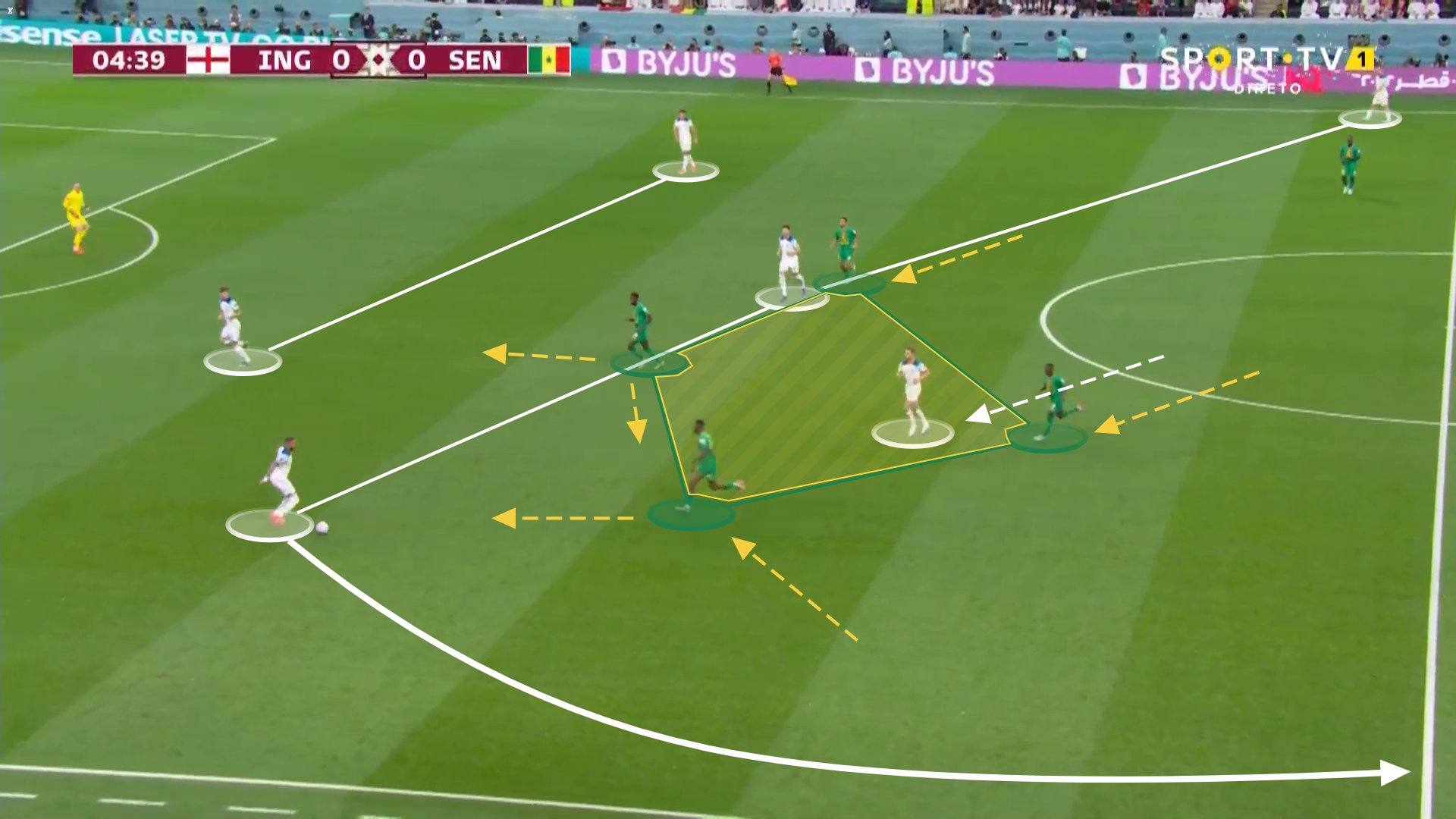 The 4-3-3 allows England to have more support out wide creating triangles between the midfielder, fullback and winger, while also having Kane as a more central option and Rice as support in case there is no space to move the ball forward. Once England moved into the opposition’s third, they have been excellent at exploiting the half-spaces. The wingers, box-to-box midfielders and Kane take turns at moving into this position. 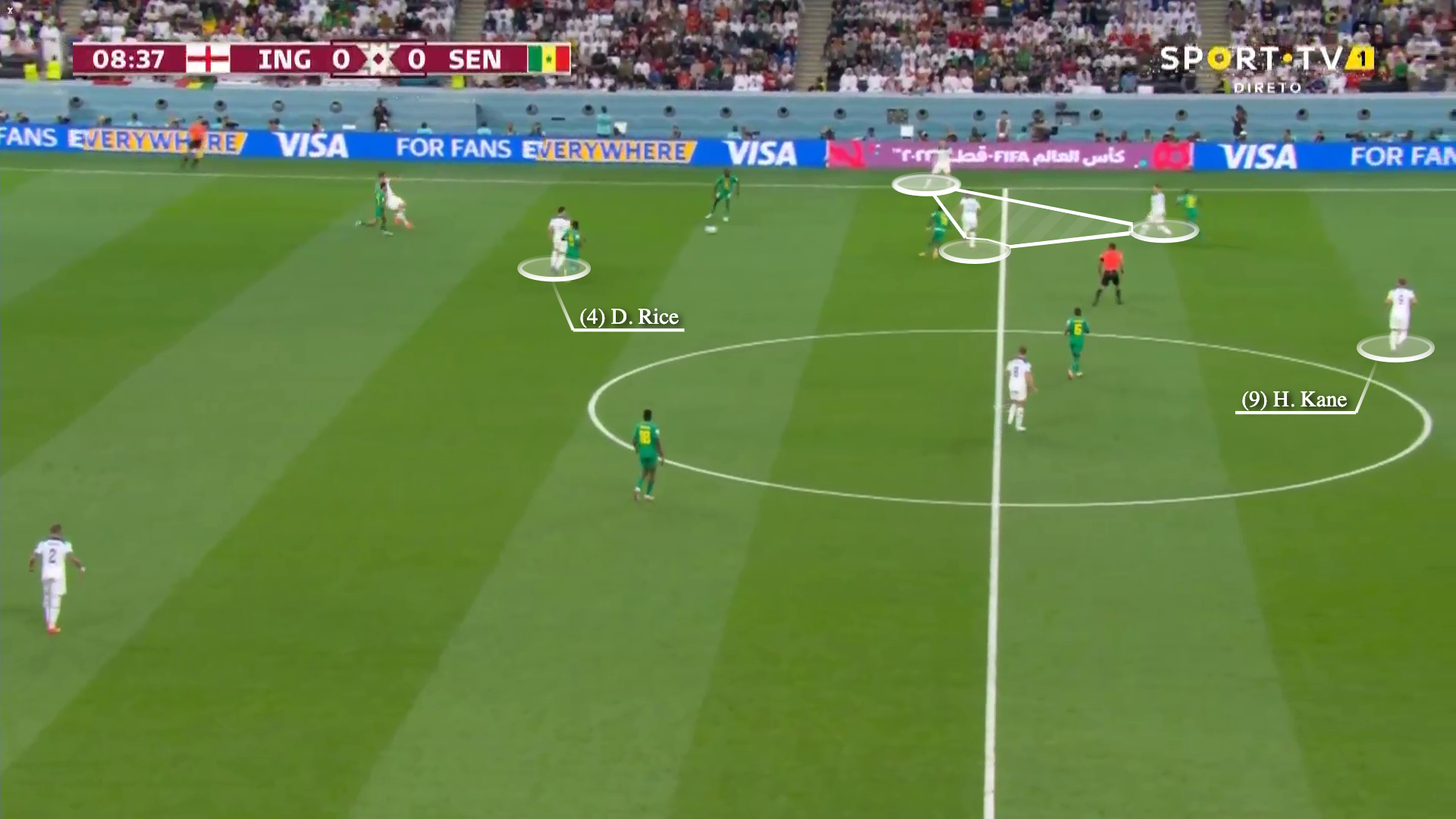 England create a lot of dangerous opportunities when cutting into this space and delivering a ball to the winger cutting inside to meet the cross. These attacks out wide are reflected in the statistics with 41% of England’s attacks coming from the left flank and 36% from the right. 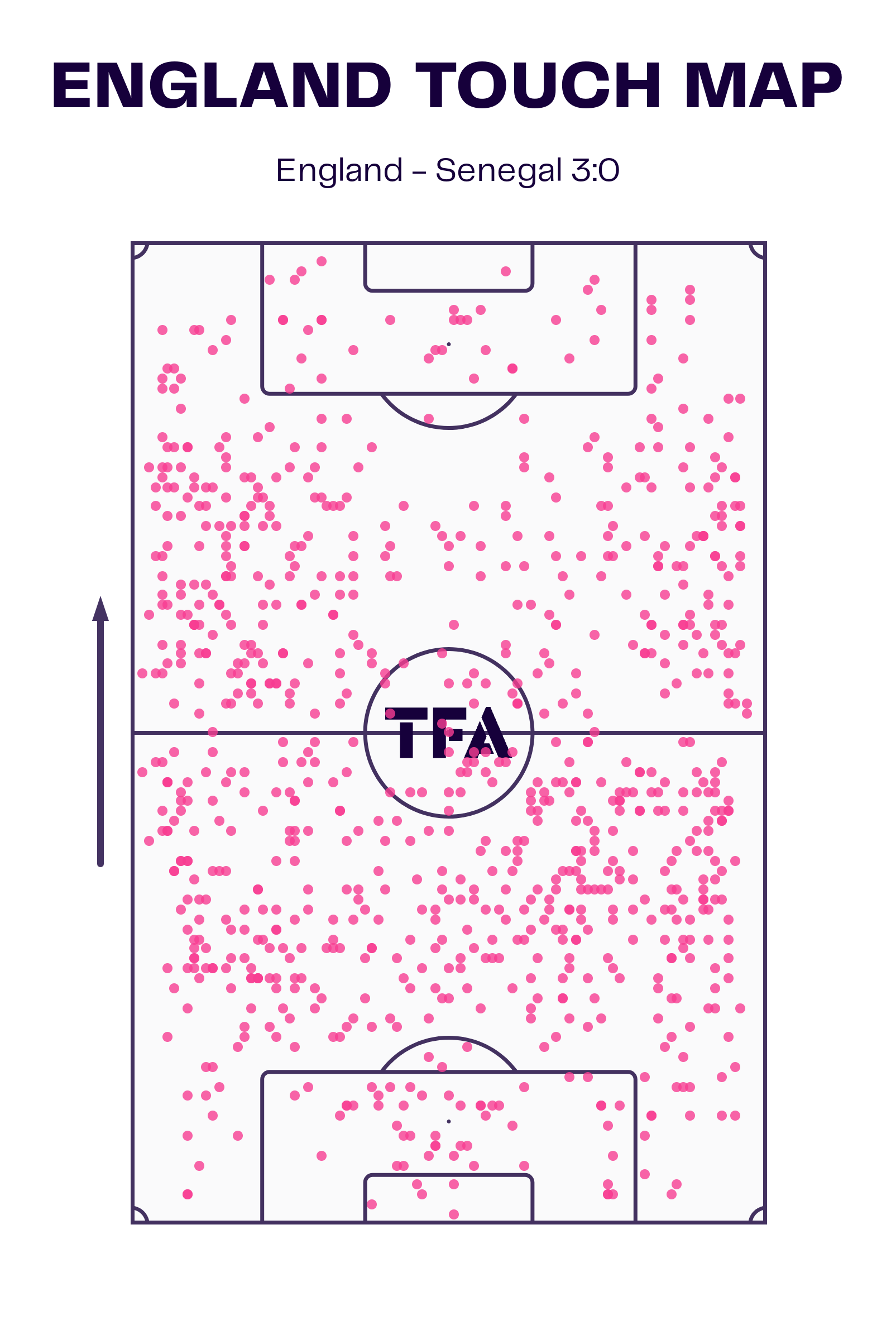 Similarly, their heat map against Senegal shows how the left flank is definitely one of England’s strong points. 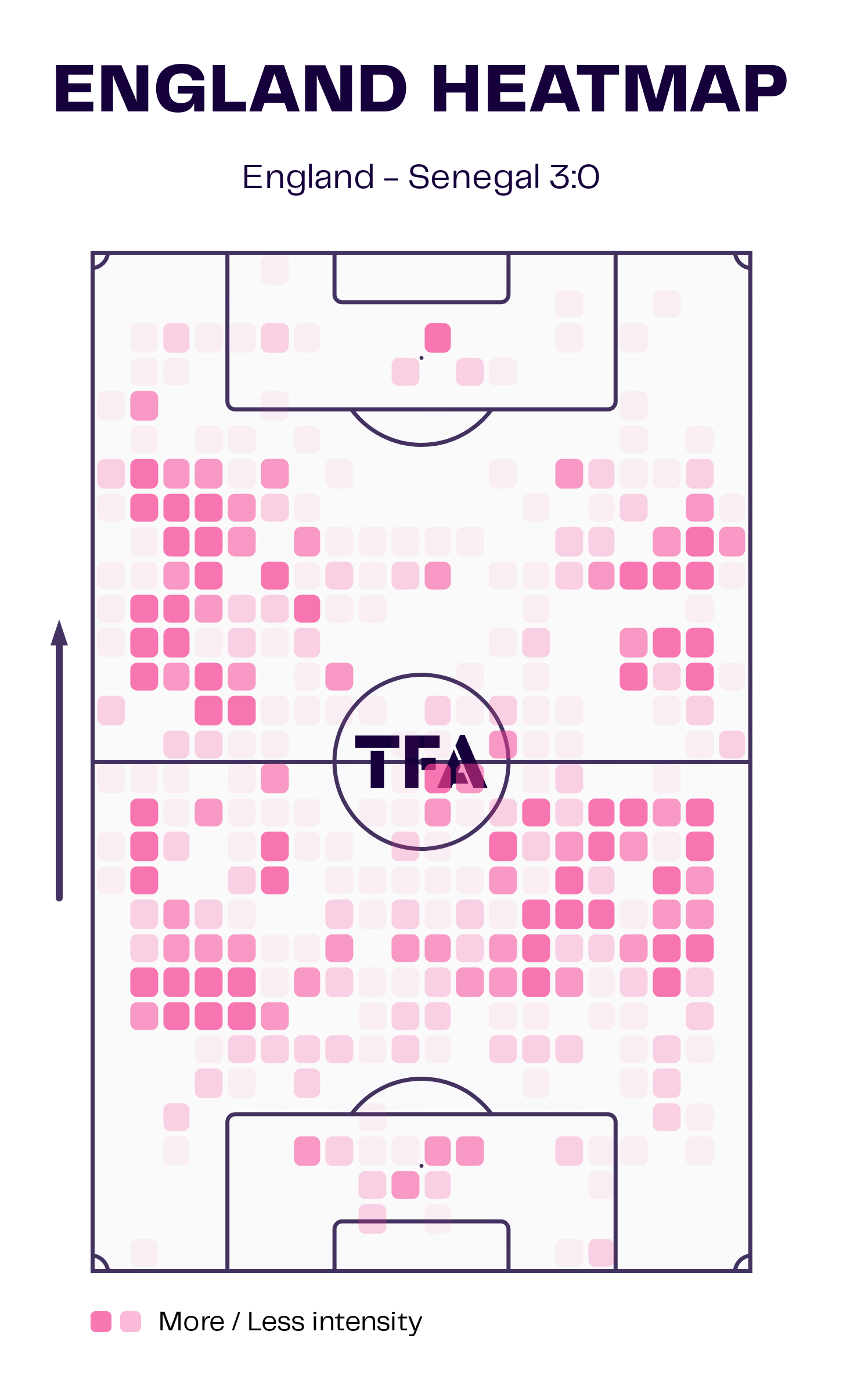 All of England’s main threat and changes in play style from the 4-2-3-1 can be summed up with their first goal against Senegal. Harry Kane drops deep to receive the pass dragging the centre-back with him and freeing up space for Jude Bellingham to attack in behind. 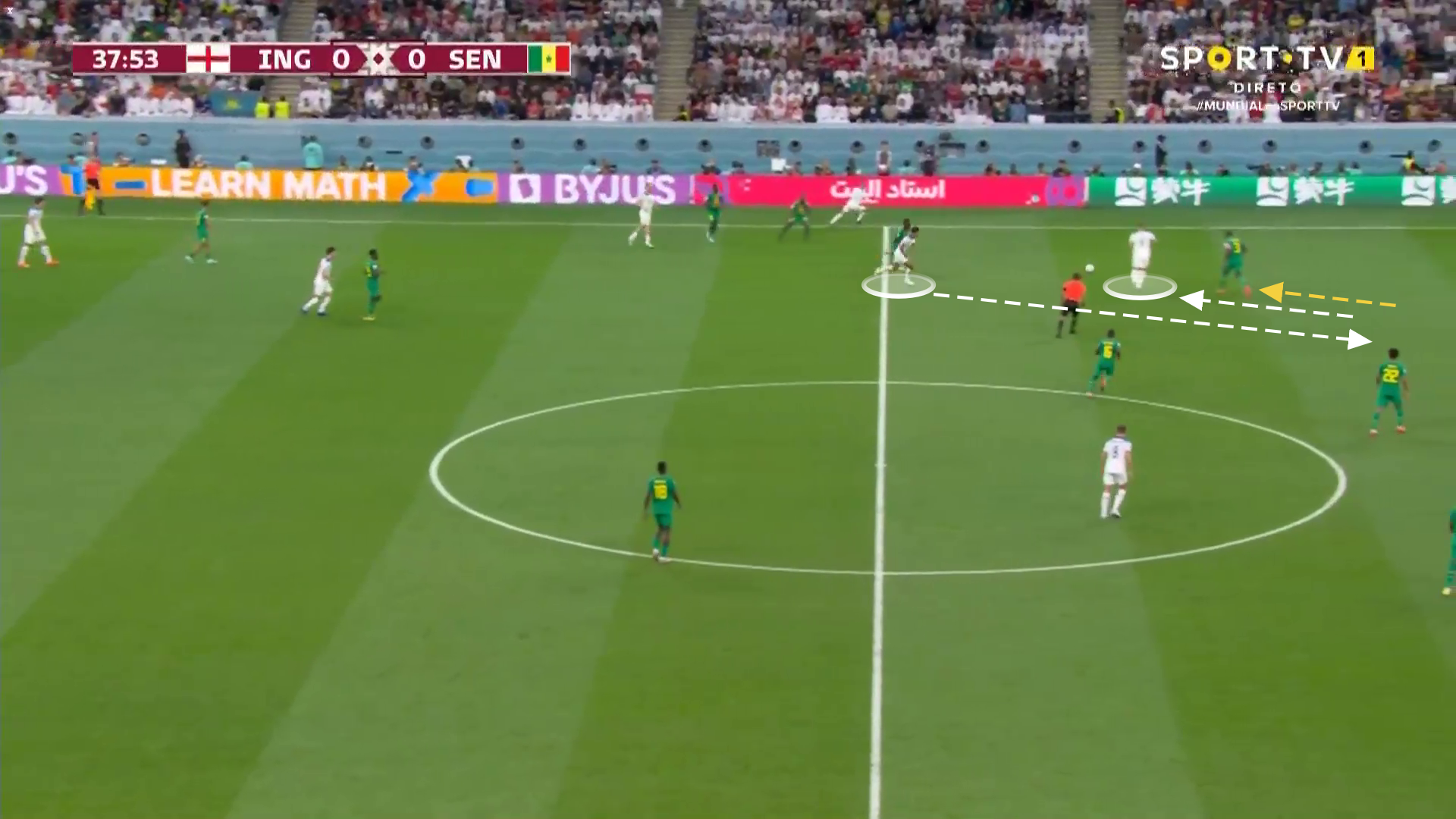 Henderson now has space ahead of him to occupy Kane’s position with Saka ensuring the fullback can’t come inside to cover Henderson’s run. Bellingham’s excellent timing and run into the half-space eventually is able to pick out Henderson near the penalty spot for an excellent finish. 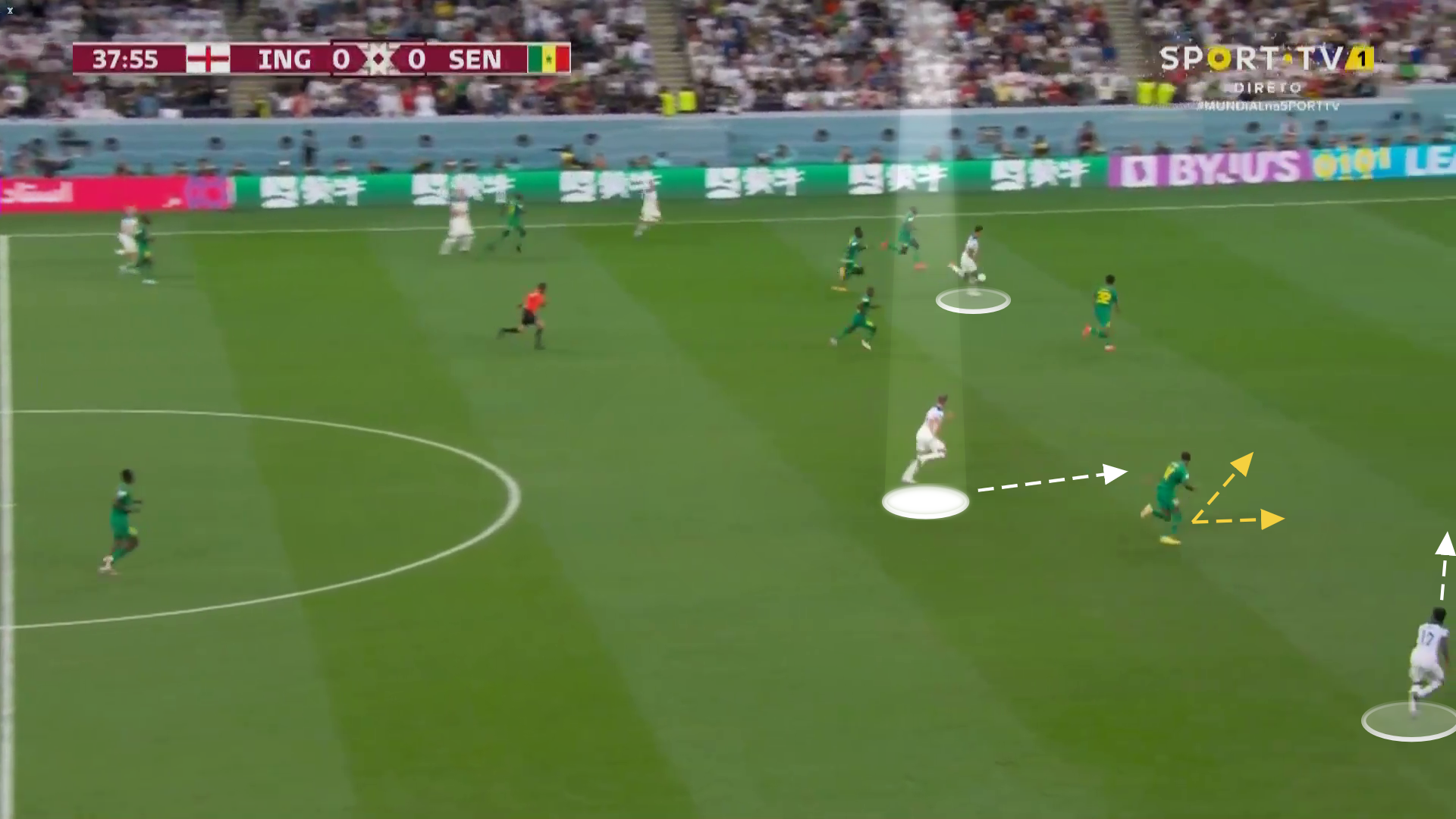 If Southgate had stuck to his initial 4-2-3-1 system, then a goal similar to this one would have been harder to accomplish as Mason Mount would have occupied Kane’s preferred position and Senegal’s backline wouldn’t have needed to push up meaning there would be no space for Bellingham to move into.

So, while England have been tactically sound in their previous matches, it’s important to note some of the individual brilliance on display in this England team. Jude Bellingham has quickly become their standout star with incredible pace, dribbling and passing ability to make him one of the most sought-after players in world football. Similarly, Saka, Foden and Rashford have also stepped up to the task and have looked in total control throughout the tournament.

Defensively, England have also been outstanding conceding only three goals from open play with the Stones and Maguire partnership comfortably dealing with any threats they’ve faced. But the strength in depth is also worth noting with England having the option of Grealish or Mount for offensive power while also having several different options at the back with Walker or Trippier both being great in their position.