Orlando Pride met Washington Spirit for the sixth fixture of the NWSL, and the fifth one for Washington Spirit given that they still have a delayed match to play. Both teams failed to get the three points and nullified each other with a 2-2 draw that witnessed goals from each side, making the game exciting for the fans but problematic for both head coaches. In fact, Orlando Pride came back in the match in the last minutes of it after being behind in score for more than 90 minutes.

Trinity Rodman was able to open the score in the 19th minute with a great shot from outside the box and then Ashley Hatch added a second goal to confirm Washington Spirit’s lead in the 66th minute. Orlando Pride however didn’t give up and were only able to score their first goal of the match in the 91st minute before adding the equalising goal in the dying seconds of the match, earning a precious point after being behind for the whole match and causing a lot of frustration for Washington Spirit players, coaching staff and fans. Knowing that Washington Spirit were very close to adding a third goal in the second half, after creating numerous goalscoring occasions, added to their frustration as it made them learn a painful lesson despite getting one point at the end of the day.

Following this match, Orlando Pride reached eight points in total, holding the sixth spot of NWSL while Washington Spirit are a little bit behind in the standings since they are ninth with six points, knowing that they still have a delayed match to play. Both teams are actually doing relatively okay at the start of this season given that Orlando Pride won two games, picked up two draws and lost two other games while Washington Spirit won a match, drew thrice and lost one match.

The team needs to strive for getting better results very soon in order to compete for the top spots and not fall into a series of bad results. What is even more frustrating for Washington Spirit is that they have all that it takes to win and they proved that on many occasions. And in order to take advantage of that, they will have to remain focused for the whole game in the future, especially from a defensive perspective, so that they can preserve their lead.

In this tactical analysis article, the focus will be on Washington Spirit’s performance and errors that led to their draw while also exploring how did Orlando Pride succeed in making an unexpected comeback in the final minutes of the match, all in an extensive analysis.

Orlando Pride started the match using the 4-2-3-1 formation with Erin McLeod as a goalkeeper, Celia Jiménez, Carrie Lawrence, Megan Montefusco and Courtney Petersen in defence, Viviana Villacorta and Mikayla Cluff as central midfielders, Darian Jenkins and Sydney Leroux on both wings while Gunnhildur Yrsa Jónsdóttir played as an advanced playmaker just behind the striker Leah Pruitt.

On the other side, Washington Spirit started the match with the 4-2-3-1 formation using Aubrey Bledsoe as a goalkeeper, Anna Heilferty, Emily Sonnett, Sam Staab and Julia Roddar in defence, Andi Sullivan and Bayley Feist as central midfielders, Trinity Rodman and Ashley Hatch on the wings and Ashley Sanchez as an advanced playmaker in support of the striker Audrey Harding. 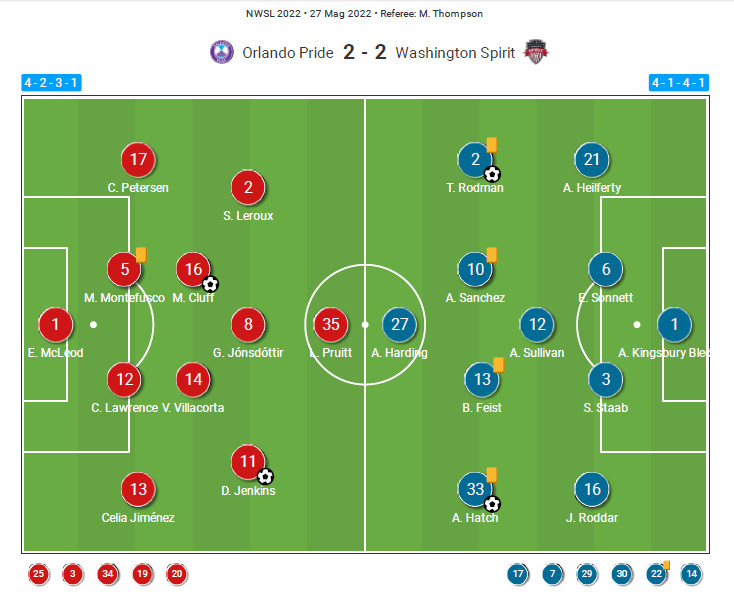 Washington Spirit made a gradually impressive start to the match by trying to absorb Orlando Pride’s initial dynamism and getting possession of the ball in key areas and especially in the midfield. What helped them in this is their continuous high pressing and aggression on the ball. Such efforts were soon rewarded when Sanchez pressed high on her direct opponent and exploited the latter’s controlling mistake to intercept the ball in a very dangerous area, as you can see below. 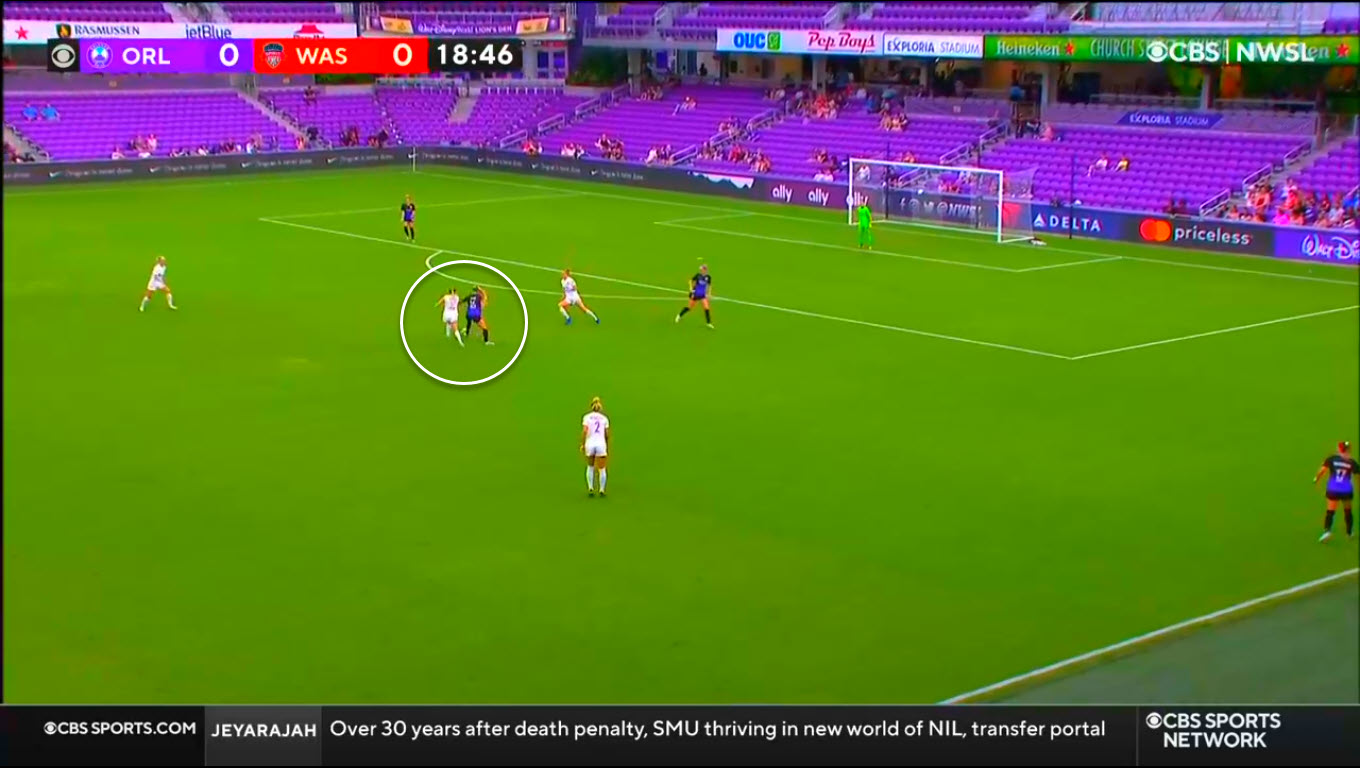 Following Sanchez’s interception, the American international covered the ball well and in a quick fashion with her body as she was turning around, then, she passed the ball to Harding who analysed her options and decided to give a pass to Rodman. The latter got the ball at the edge of the box and had an unexpected thought in mind: shooting with power towards the left post. The shot was well-angled and at the same time very powerful which surprised and didn’t allow McLeod enough time to react and reach the ball before going inside the net. Moreover, what made her saving attempt more complicated is that the ball bounced just before reaching the goal. 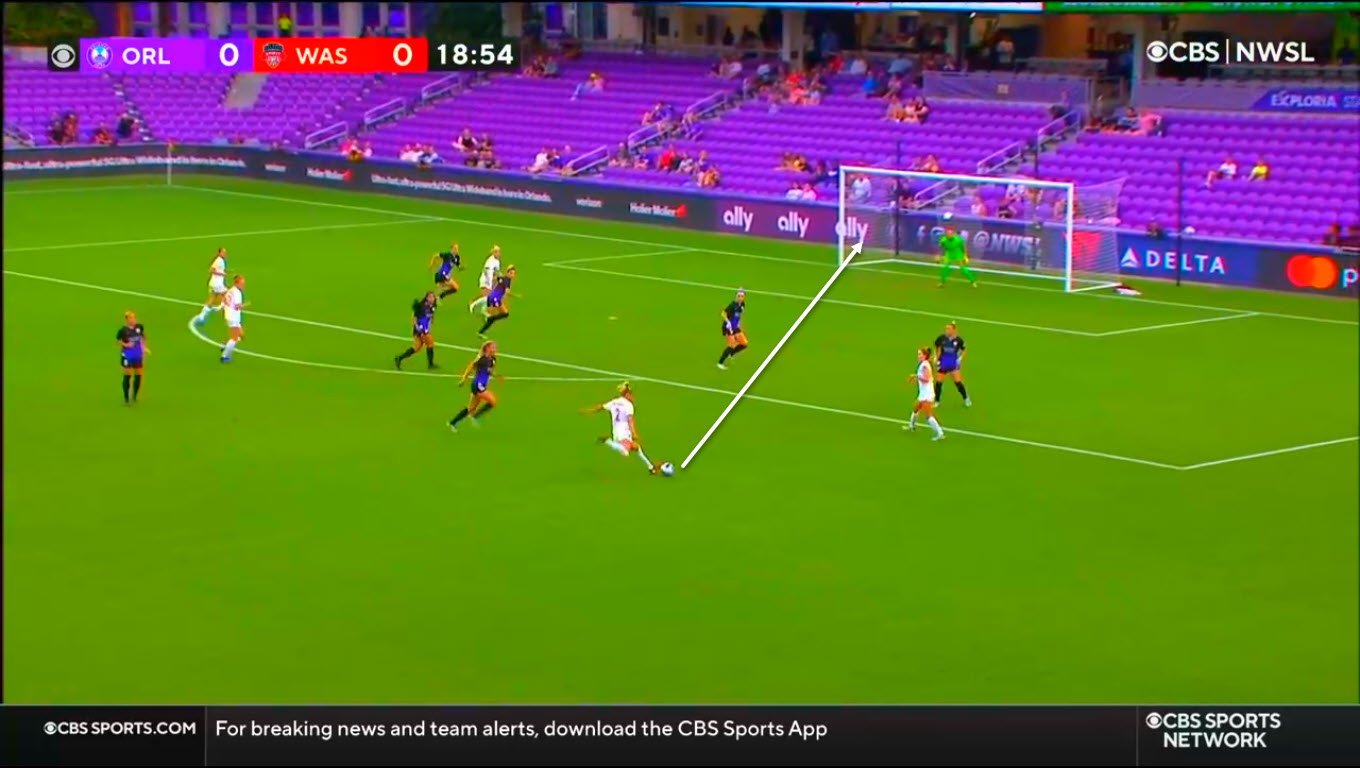 Washington Spirit kept relying on both wingers as well as on Sanchez and Sullivan to explore the half-spaces in Orlando Pride’s own third and try to reach the box as often as possible. In addition, they made sure to exploit the counterattacking chances they got as this has been a great attacking weapon for Washington Spirit at the start of this season.

The action started from Sullivan who collected the ball in midfield and who was acting like a midfield station for the team and making use of her physical characteristics. She gave a pass to Harding while both Sanchez and Feist were running towards the box. Harding was intelligent enough to notice their movement and provide a well-timed through passe to Feist, who, unfortunately for the team, didn’t make the right decision and let the ball run until it was too late to decide since McLeod was quicker than Feist in her reaction. 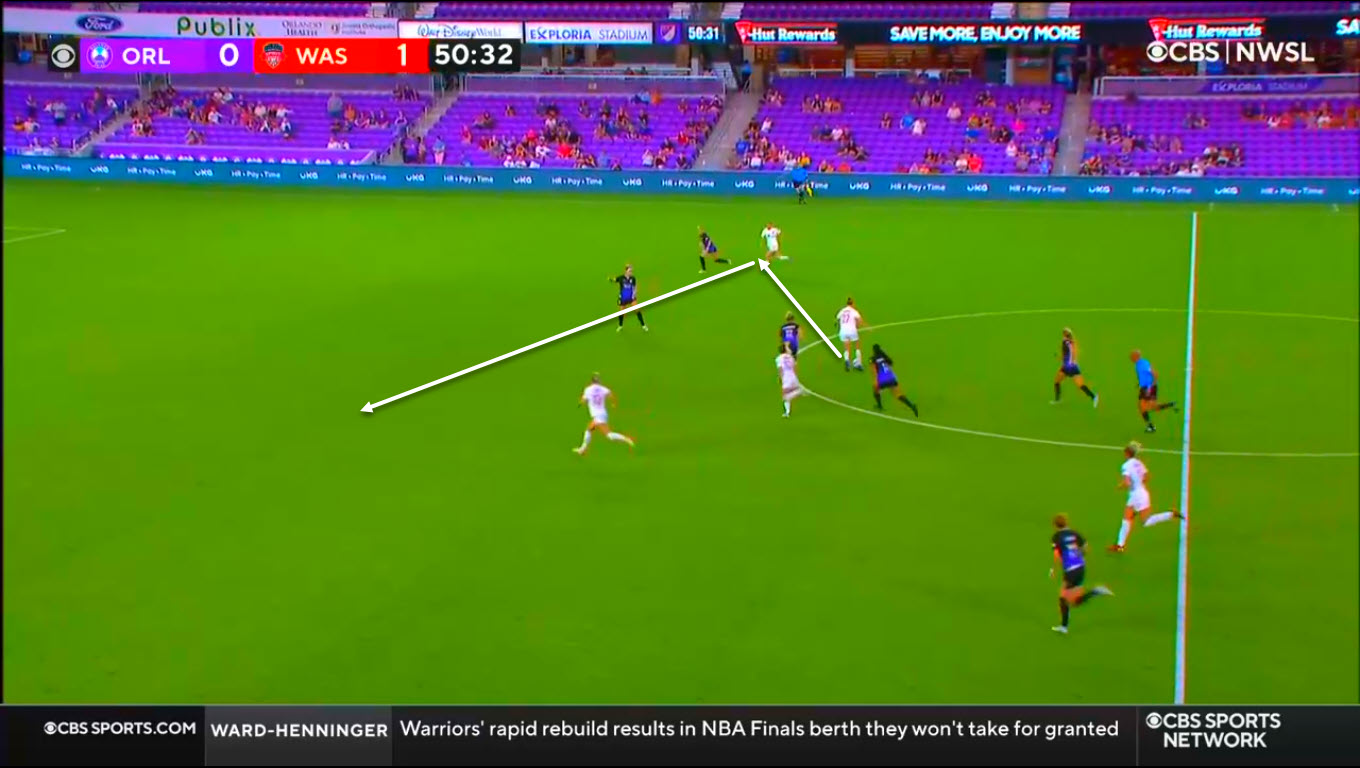 What was frustrating in this action was that Feist was not alone but was supported by Sanchez who positioned herself very well to receive a simple pass and shoot on goal. However, Feist was not fluid enough to make up her mind about shooting or passing. And this was one of the big chances that cost Washington Spirit two important points and allowed Orlando Pride to believe in their abilities to get back in the game. 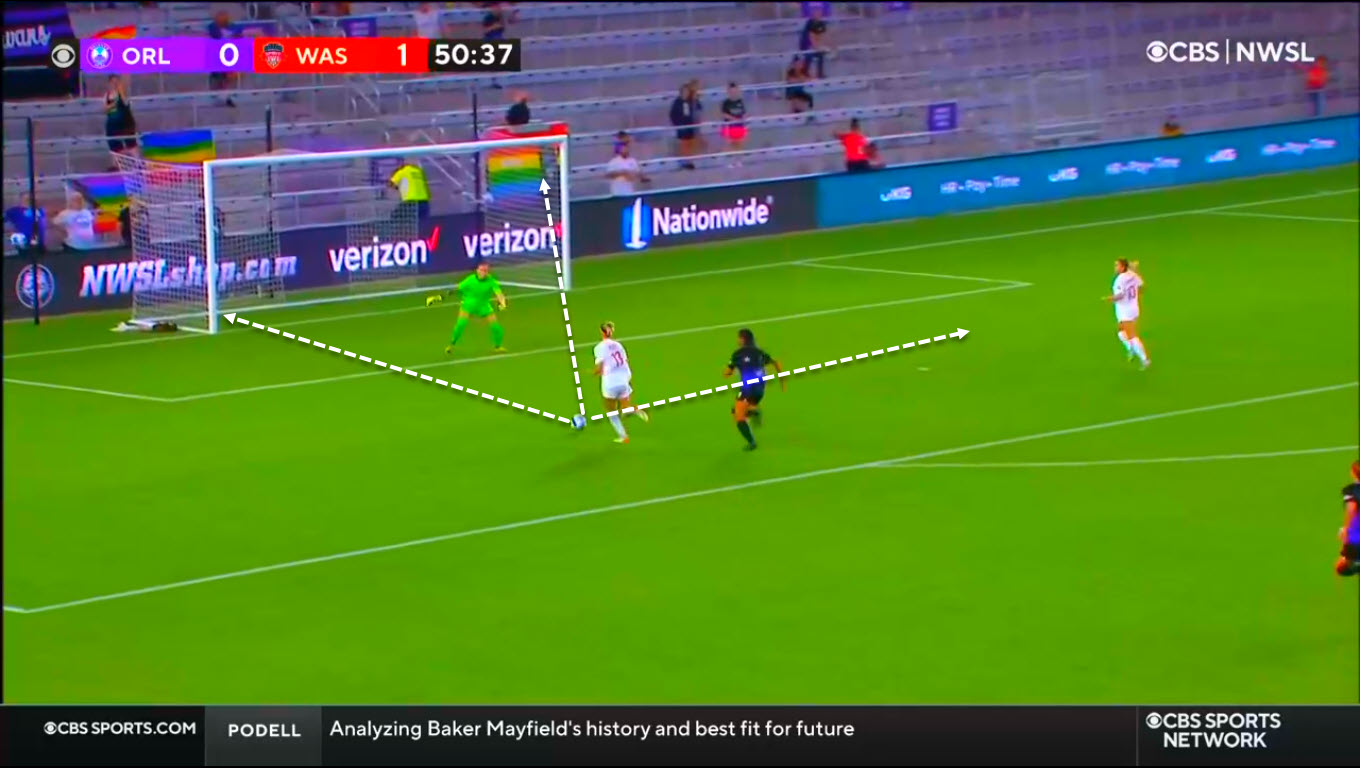 Washington Spirit were able to make up for their previous missed opportunity by scoring their second goal in the 66th minute, after an excellent playmaking work from Sanchez who got the ball after it was deflected from an Orlando Pride player. She exploited this mistake and advanced while fixing her direct opponent and waiting for Hatch to demark herself from her marker and put herself in a suitable position. Sanchez chose the adequate timing for her through pass that followed Hatch’s movement. And the latter found the pass very inviting for shooting even though it was on her weaker foot. Nevertheless, Hatch sent a powerful shot with her left foot to score the second Washington Spirit goal, proving once again that she can score using both feet. 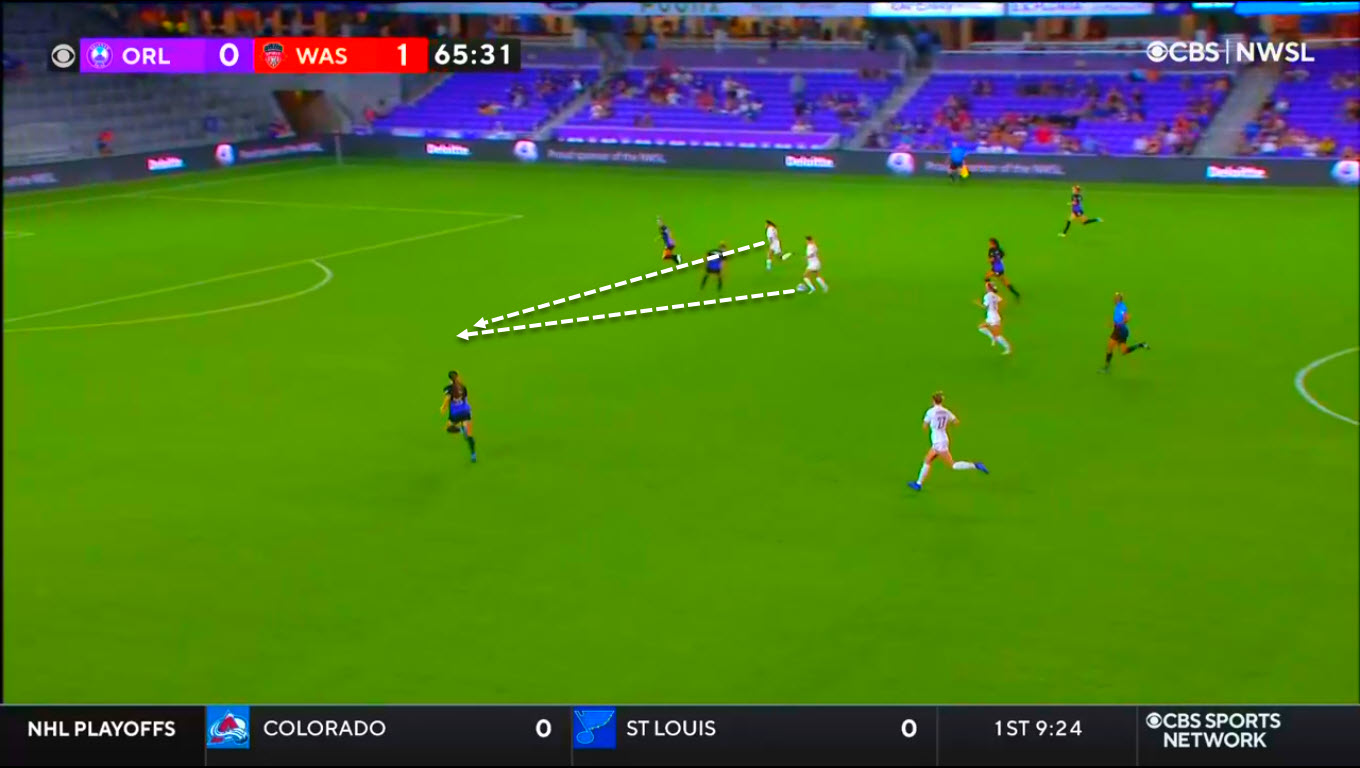 What we said about Feist’s missed goalscoring chance applies perfectly to Sanchez who also missed a big opportunity in the 91st minute after she intercepted the ball in midfield, advanced and was accompanied by Rodman who was waiting for a pass on Sanchez’s right side. However, Sanchez did not go for the most adequate option and decided to shoot from distance despite having only one player to surpass and more importantly, having a player like Rodman waiting on her right. 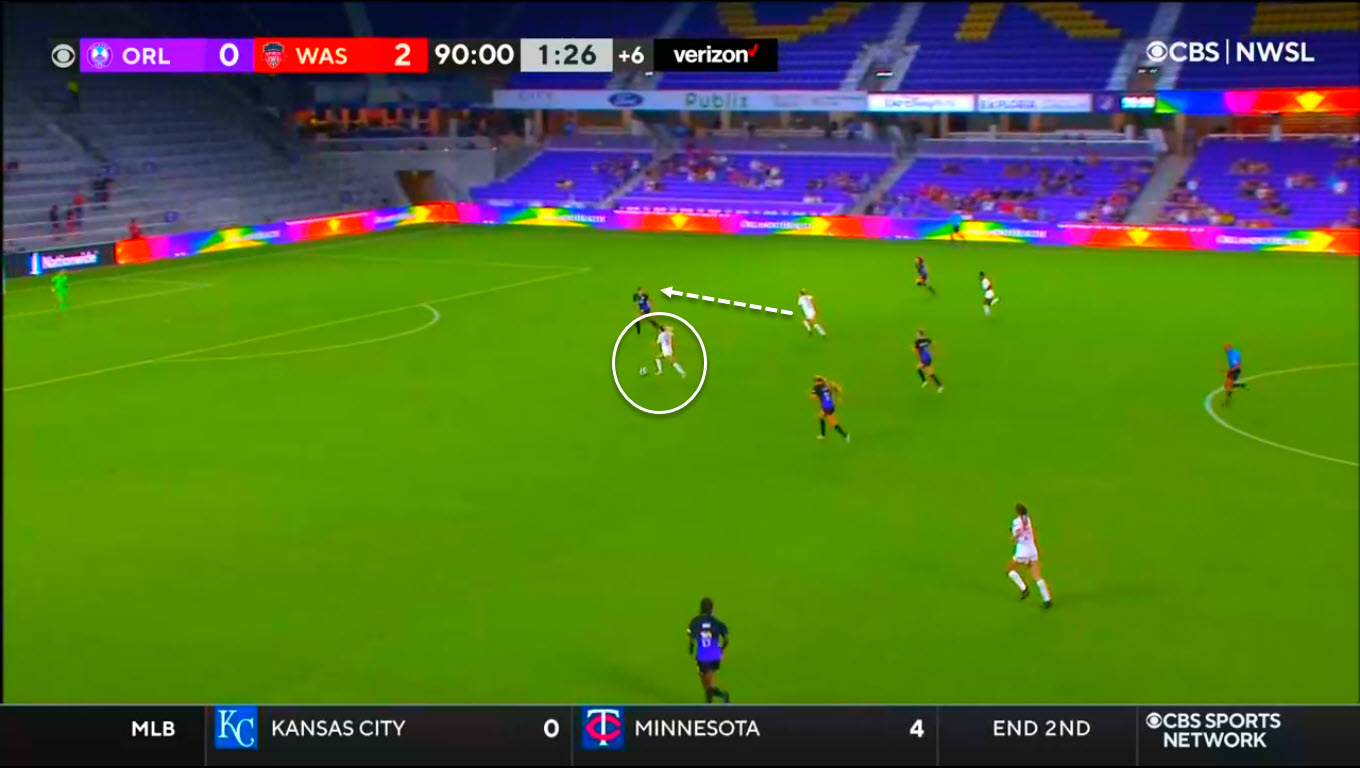 Orlando Pride did not show a lot of positive things before the 80th minute. Their attacking attempts were often blocked by Washington Spirit’s defence and they looked out of solutions for the larger part of the match despite some desperate attempts. But after conceding the second goal, the players felt that there was nothing else to lose and were physically and technically relieved from the pressure.

This made them play better as they started having more possession than Washington Spirit, especially after the 90th minute when they were threatening their opponent’s goal seriously. The team were able to obtain a couple of corners in the last part of the game but they didn’t exploit them in the required way. A moment later, they exploited a bad clearance from Kingsbury and launched a counterattack with quick short passes until the ball reached Listro on the right-wing who decided to cross the ball towards the box without thinking too much. Cliff exploited the confusion created inside the box by coming from behind and directing the ball with a powerful header towards the net. 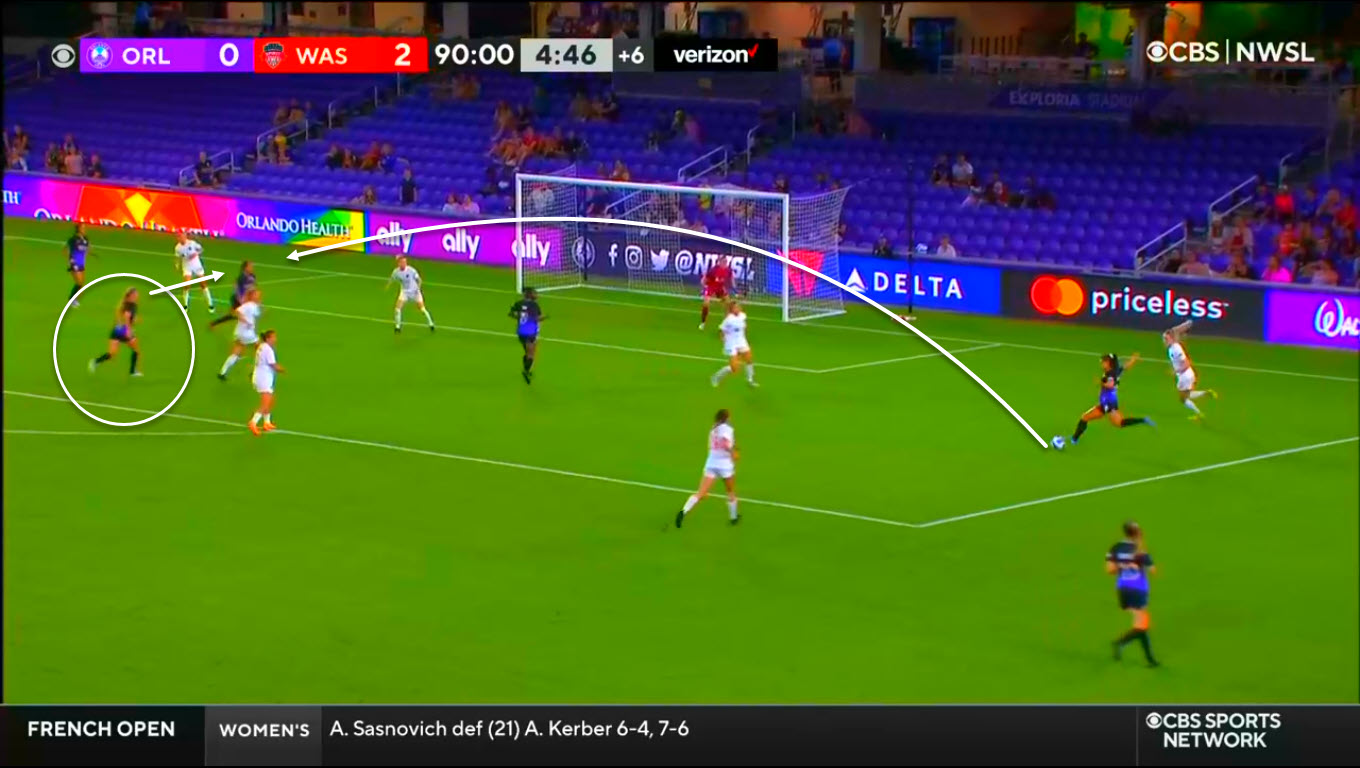 This goal gave a crucial boost for Orlando Pride’s players who started trying with all possible means to reach Washington Spirit’s box quickly in order to add a second goal. They exploited their opponent’s lack of concentration in defence during these last minutes and felt that they can turn the table on them by pressing on their defence and trying to find some space for shooting.

In this final action, Doyle was intelligent enough to provide Jenkins with a great pass between two of Washington Spirit’s players, allowing her to be in an excellent shooting position. Jenkins, therefore, scored her team’s equalising goal with great calmness and precision, making use of Washington Spirit’s worrying defensive mistakes and lack of organisation during these final minutes, as opposed to their organisation during the rest of the match. 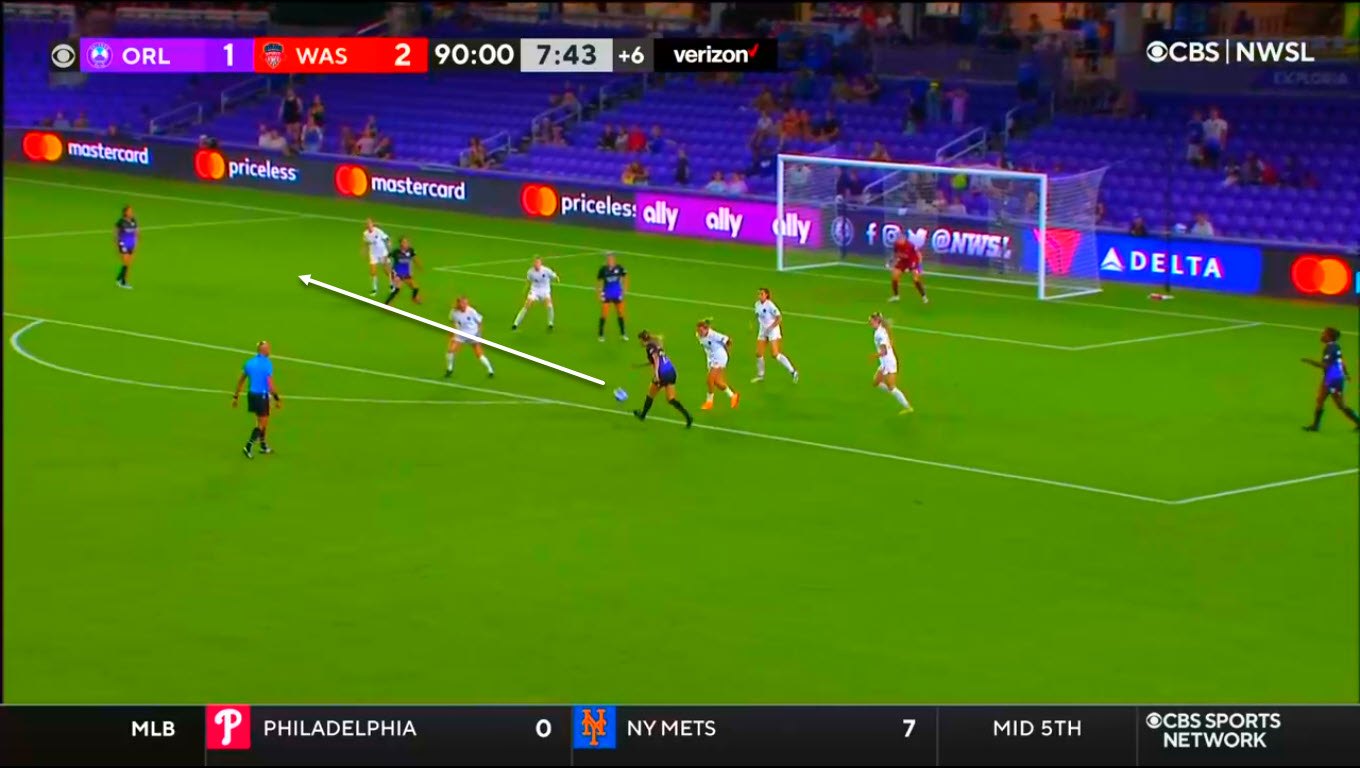 It is true that this draw helps the opponents of both teams more than Washington Spirit and Orlando Pride themselves since both teams missed an opportunity to get the three points, especially Washington Spirit who were ahead in the score for almost the whole match. The team needs to focus a lot more during the final minutes as they have to work on their defensive organisation and discipline more often in order to not let such scenarios occur again.

For Orlando Pride, this great comeback will serve the team a lot especially from a psychological perspective as it will give the players a huge boost that will be very useful for the upcoming matches. Nevertheless, it should be said that the team’s defence is not as solid as needed, knowing that Orlando Pride could have conceded three or four goals in this match instead of two. Working on the defensive aspect is extremely important in order to battle for wins because even when the team has a similar attacking quality to that of Barcelona, Bayern Munich, Lyon, PSG, Chelsea or any other big team in the world, having a solid defensive organisation is fundamental to keep a balance and not concede a lot of goals per match.