The 2021/22 season has been a breakthrough season for AC Milan’s Raphael Leao.

The winger has played a central part in a Milan team who won the Scudetto for the first time in eleven years.

The 22-year-old has scored eleven non-penalty goals and supplied eight assists in Serie A this season. He finished as the club’s joint-top scorer with Olivier Giroud and was Milan’s key attacker in what was an excellent end to the season for the Rossoneri.

In this scout report, we will provide a tactical and statistical analysis which focuses on Raphael Leao’s attacking traits and how they have led to him being awarded the Serie A player of the season, and recently seen him linked with a move to Real Madrid.

Stefano Pioli has used Raphael Leao as a wide attacker in a 4-2-3-1 formation. Although the position he occupies suggests he is a winger. He is equally as effective at coming off the flank and attacking inside, as he is right-footed. The positions he takes up and the areas he attacks both in and out of possession are comparable to that of an inside forward.

This heat map shows the average area of the pitch that Raphael Leao occupies and contributes to Milan this season. Positionally you can see how his attacking threat is through the entire left-hand side of the pitch. 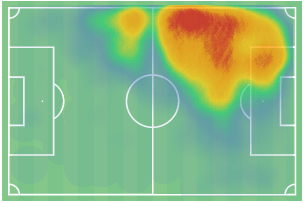 Leao’s performance in this position allows Milan to attack down the left-hand side with good fluidity. The young Portuguese star has developed a good understanding with left-back Theo Hernandez.

Together they work in tandem. Leao’s movement inside and good link-up play create space for Hernandez to attack down the left-hand channel. 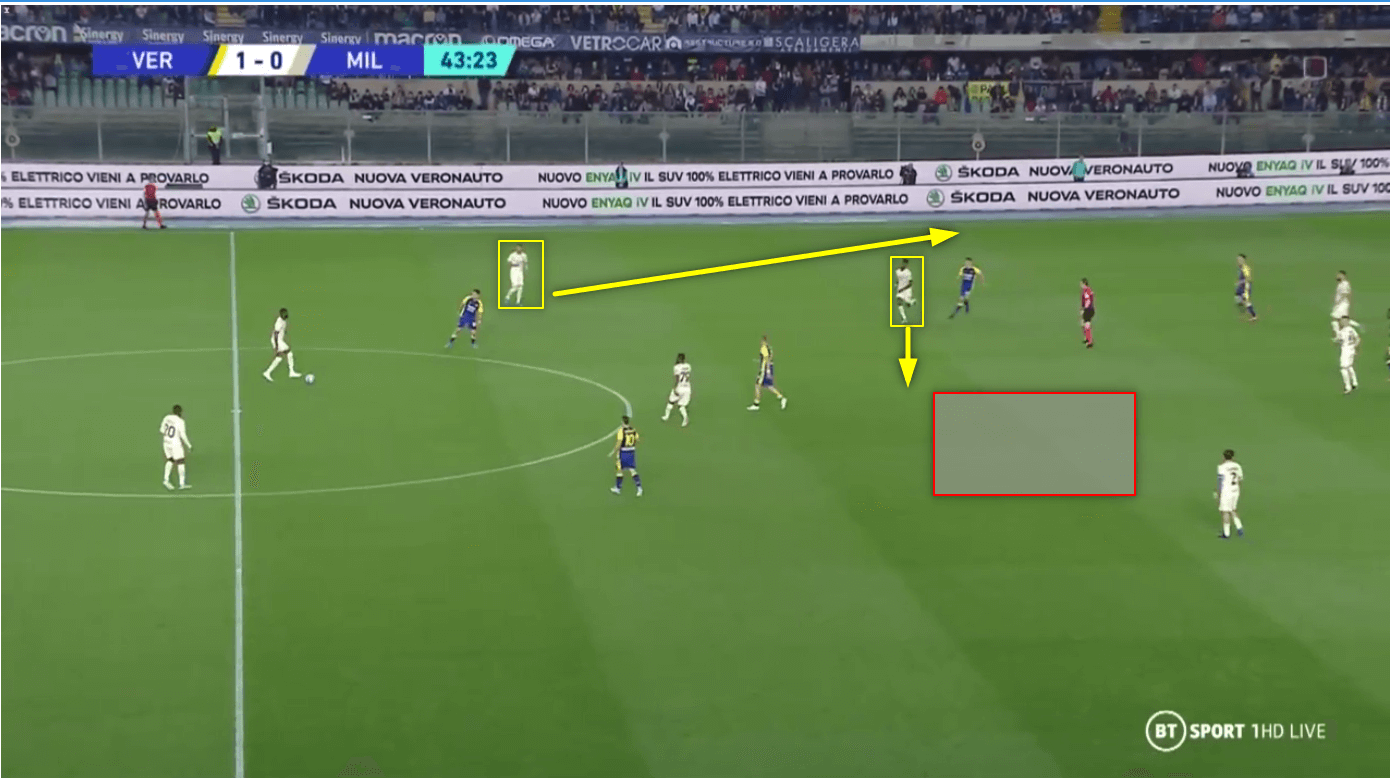 Above, you can see how Leao moves inside takes the ball from the defence and links up the play in the midfield. As he does this, he vacates the space on the left flank and attacks the space centrally.

His movement inside pulls Verona’s defender inside and enables Milan to play through the lines. Once this happens Theo Hernandez attacks this space providing Milan with width, and therefore stretching Verona’s defensive structure. The position he then takes up centrally supports Milan’s threat through the middle of the pitch, creating a central overload

Overall, Raphael Leao’s position and role within this team have become essential for Stefano Pioli’s tactics. Pioli enjoys Milan attacking and defending in numbers and what Leao provides positionally is important for the Rossoneri’s attacking and defensive transitions.

When you compare Raphael Leao to other players who play in the same position as him it becomes clear how well he has played this season.

When we compiled the data, we decided to focus on the statistics that Stefano Pioli’s 4-2-3-1 requires from a player that plays in Leao’s position – goals and assists.

The data visualization below shows the goals and assist contributions of players that have played as wide attackers on the left or right flank this campaign. Each player has played for over nine hundred minutes. 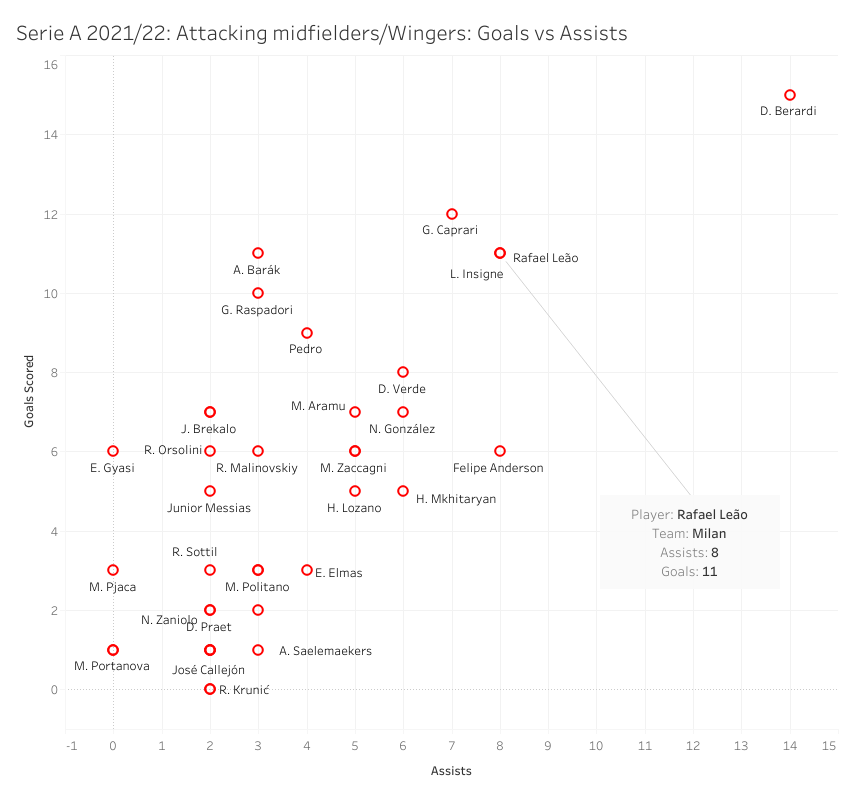 As you can see Raphael Leao has finished this season in joint third for goals scored and joint second for assists.

However, if you take goals scored via a penalty into consideration, then the data reads better for the young Portuguese attacker. Where other players have added to their goal tallies through the penalty spot, Raphael Leao’s goals have all been scored from open play. As you can see below, he still is joint second for assists but has scored more than any other player that plays the same position. 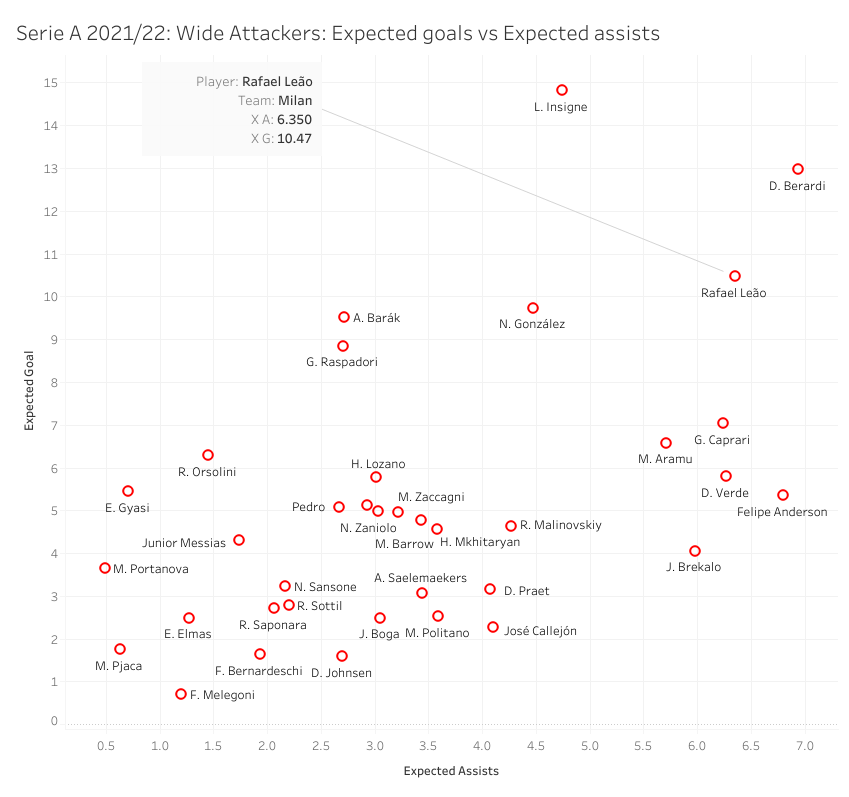 For an attacking player who played 87% of his matches out wide, his attacking output this season has been very productive and central to Milan’s success and Pioli’s tactics.

A particular highlight of Raphael Leao’s plays this season has been his dribbling. He tries more dribbles than any other player in Serie A averaging 10.85 per 90 minutes and has a success rate of 60.84%.

The twenty-two-year-old shows good intelligence when he dribbles and attacks the opposition’s defence. With his pace and powerful running, he could be forgiven for just knocking the ball past his opponent and then running. However, when he is dribbling, he is incredibly good at exploiting space and attracting multiple from the opposition towards him.

You can see that here when Milan played Atalanta. The first image shows the position of the players, and the choice Leao has as he starts carrying the ball. 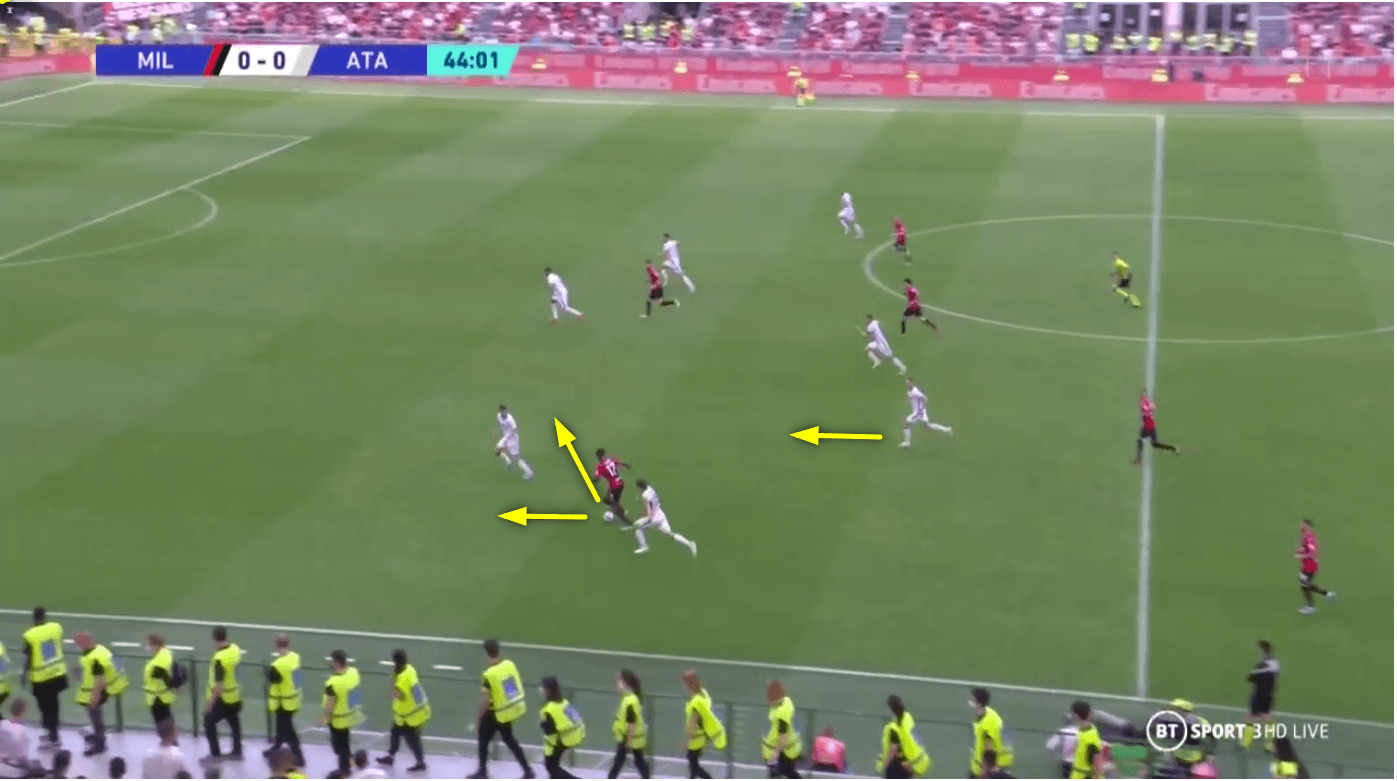 He is 1v1 with the right-back but has an Atalanta chasing him from behind and looking to double up on him as well as the two central midfielders supporting their defence on the inside.

Then seconds later, it goes to this. 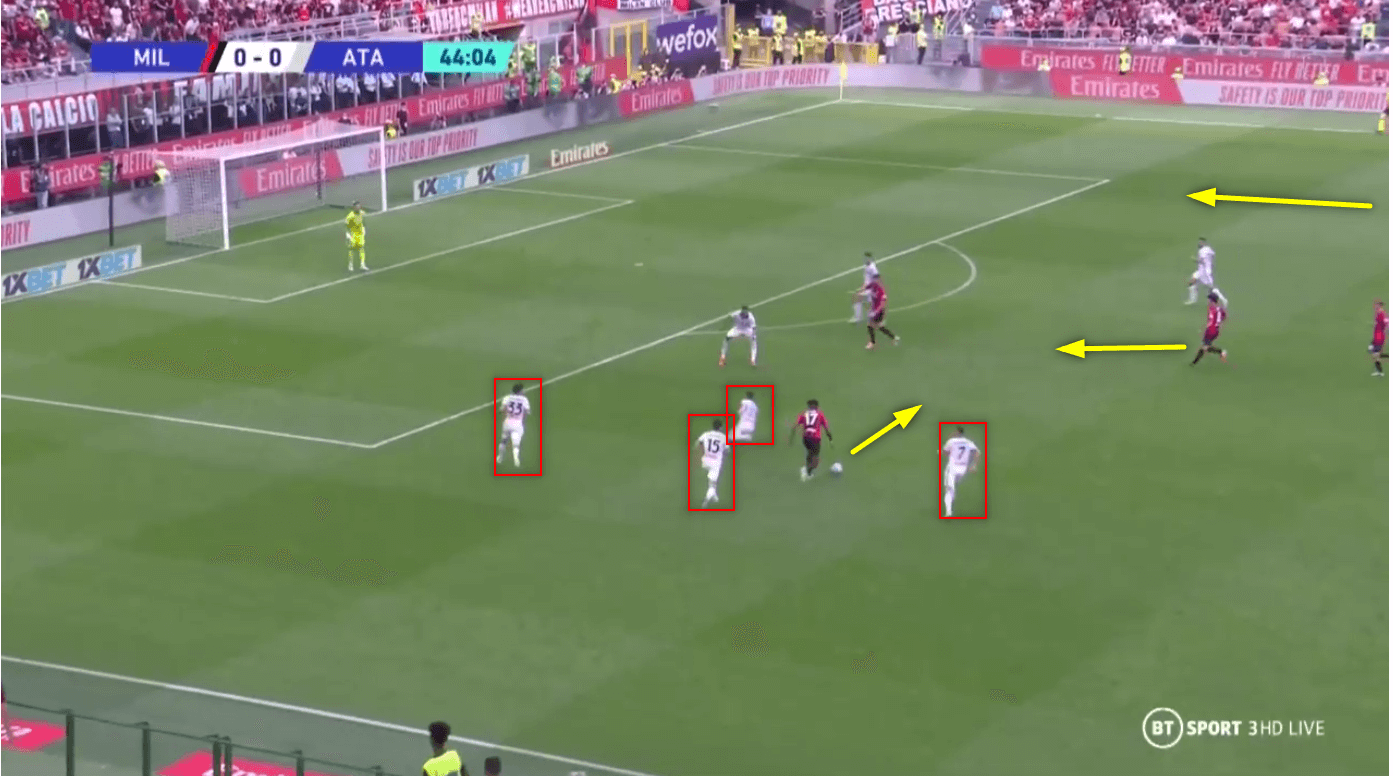 You can see how he has cut inside and pulled four Atalanta players out of position. This leaves Milan with a good attacking opportunity as it creates space for the other Milan players to attack and gives them a numerical advantage across their attacking third.

Leao’s ability to carry the ball is fundamental to the balance of the team. Balance has been an important aspect of Stefano Pioli’s tactics since taking over at the San Siro.

He sets Milan up so that the players who are selected to play in the wide areas provide different strengths and skillsets to the team’s approach.

A key aspect of Raphael Leao’s dribbling and attacking traits this season has been his ability to provide an end product to his play.

Not only is he exceptionally good at disrupting an opposition defence with the areas he attacks, but his awareness to be able to pick the right pass has been significant for Milan’s attacking play.

He averaged 0.75 key passes per 90 and 0.91 smart passes per 90. When compared to players who play in a similar position to him, this was amongst the best in the league.

In this example below he has moved to the left-hand channel. Given his preference and ability to dribble at defenders that could have been the option, he decided to take considering the space on the outside.

Instead, he sees the run Theo Hernandez makes on the inside and plays a through pass through the half-space for Hernandez to attack. 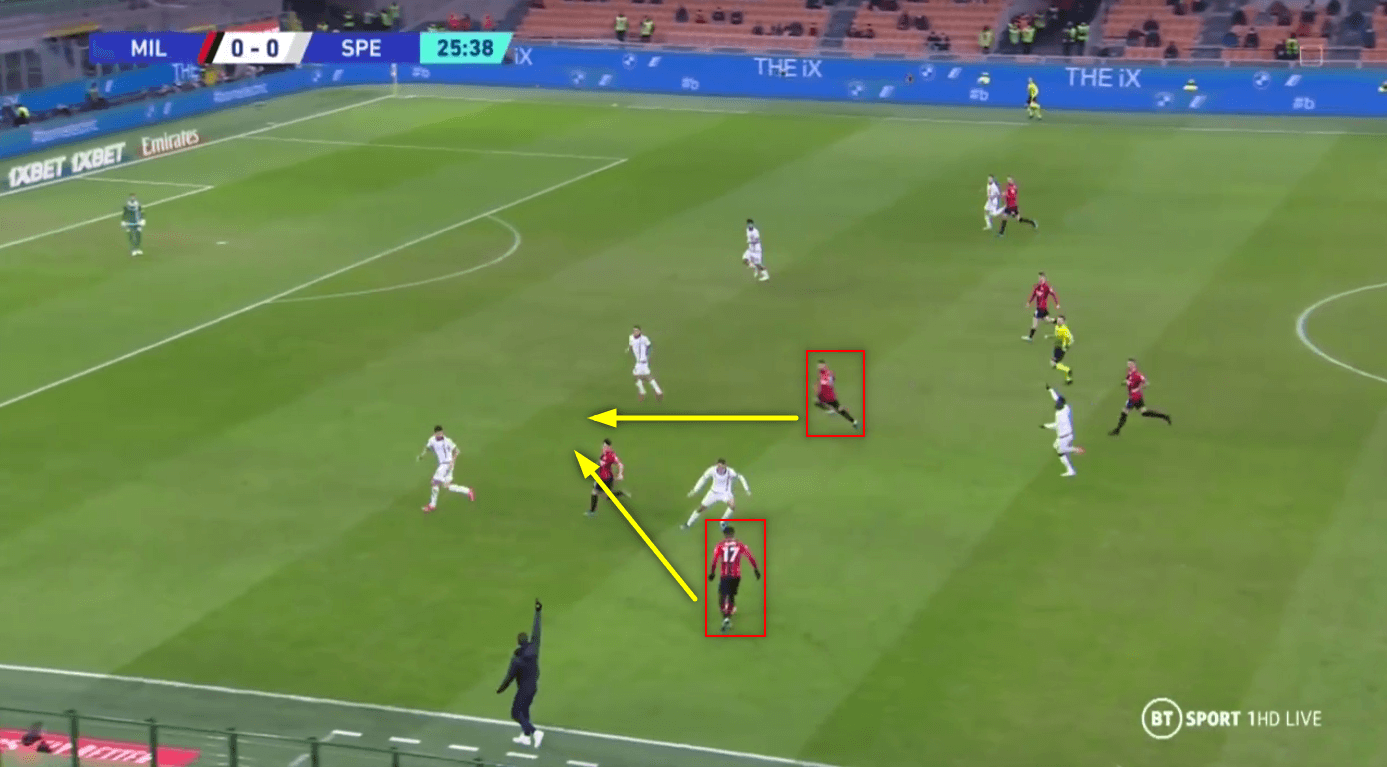 Against Lazio in the Stadio Olimpico, with Milan trailing it would have been easy for Leao to shoot when presented with the situation he is in below. He sees the run of Olivier Giroud and the open space behind Lazio’s defence. 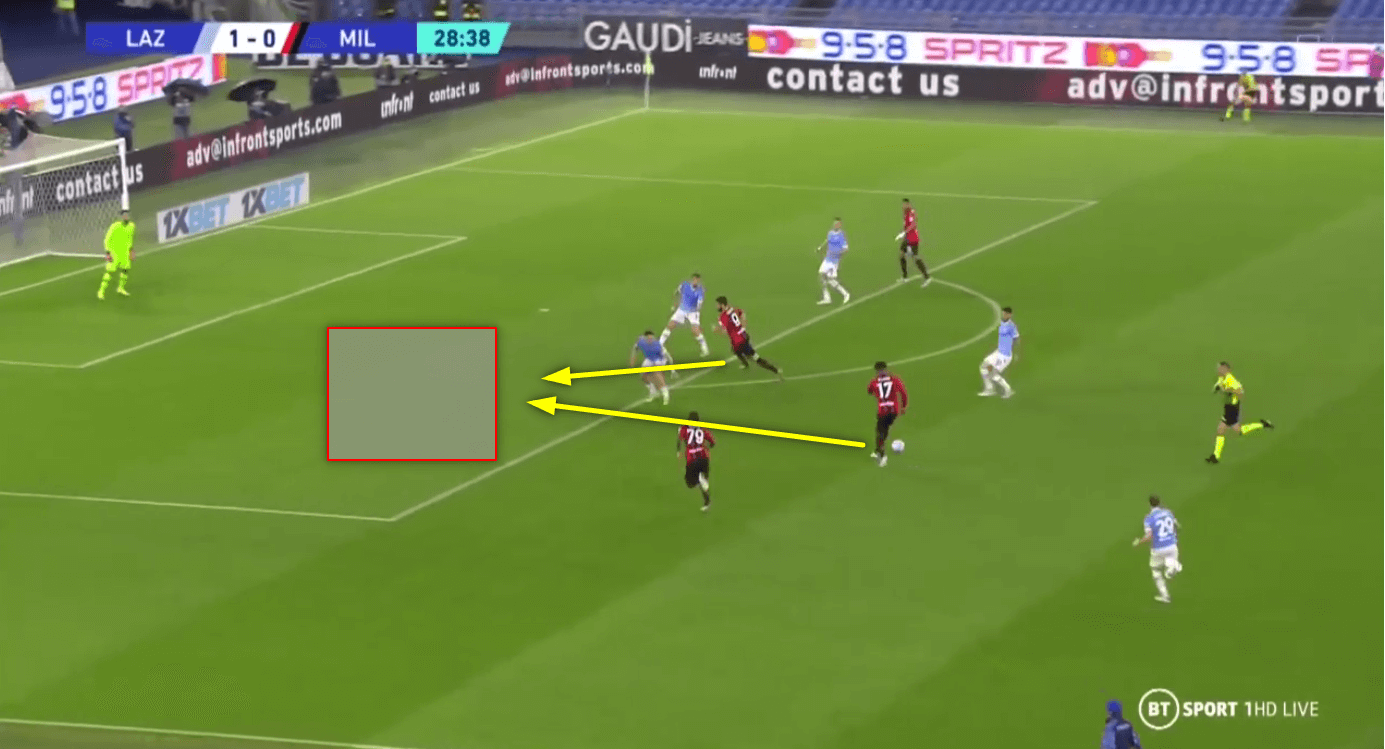 A key trait that Raphael Leao has always had since he came through Sporting Lisbon’s famous academy is movement.

We have already provided analysis earlier in this scout report on how well he has developed his movement of the ball in possession. Without the ball, he is a master of attacking space.

It is natural for him being positioned on the left wing to be coached at being a threat in behind the opponent’s right full-back.

Since he joined Milan, he has played on the left-hand side of Stefano Pioli’s 4-2-3-1. His responsibility is to be more of a threat on the inside and support the lone striker, which he has done brilliantly this season often moving inside and making runs in between the opposition full-back and centre half.

Leao has averaged 4.7 touches per 90 in his opponent’s penalty area this season. Which is the most in Serie A for any player who has played over a thousand minutes on the right or left wing. His reading of the play and his anticipation of space in the penalty area have played a pivotal role in this and helped his goal and assist contribution.

In the two images below, Leao shows his movement and anticipation spaces by making a run across both Lazio’s and Atletico Madrid’s defence. Against Lazio, his run across the defence allows Hernandez to attack the far post and provides Ante Rebic with multiple options. 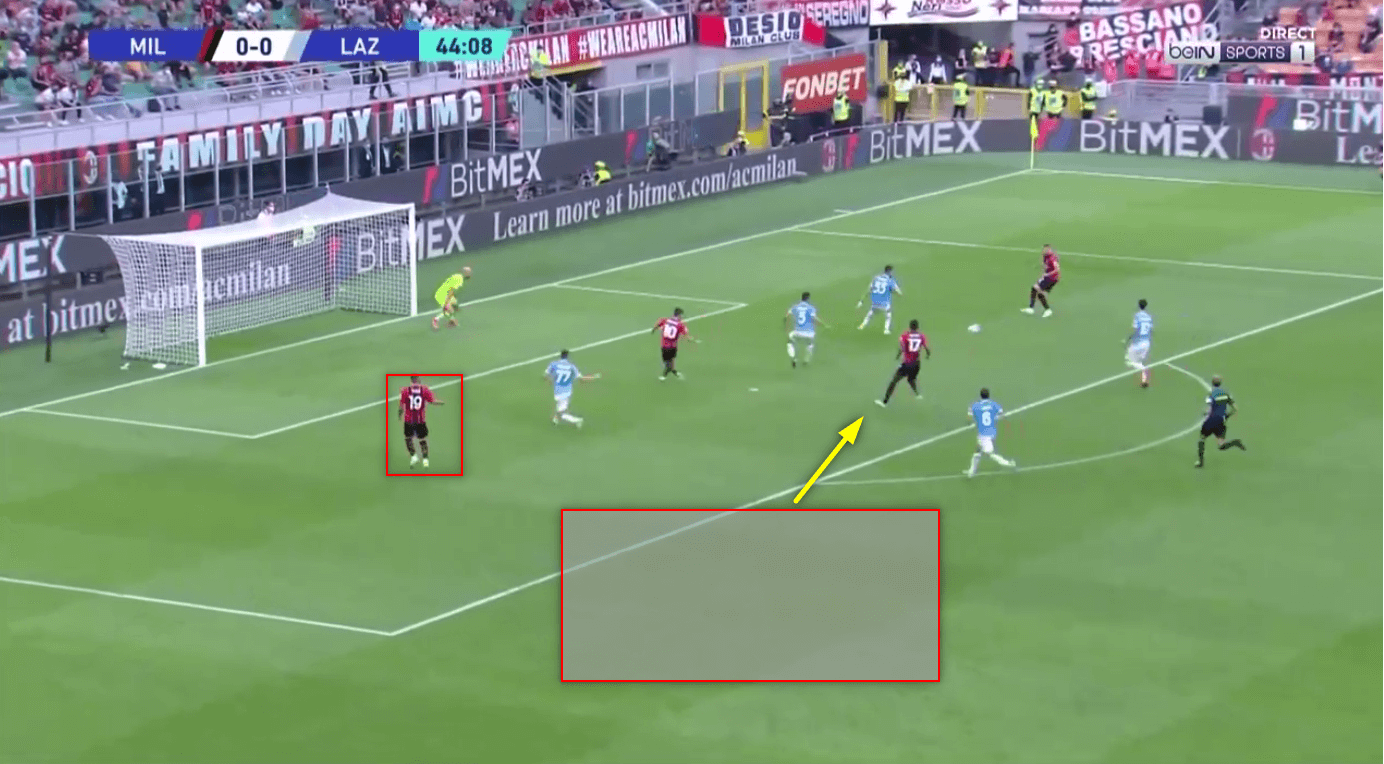 Against Atletico Madrid, Milan has once again overloaded the penalty area. Leao could have attacked the far post. But he anticipates the play and runs across Atletico’s defence which causes a knock-on effect for their defenders as this type of movement pulls a defender out of position. 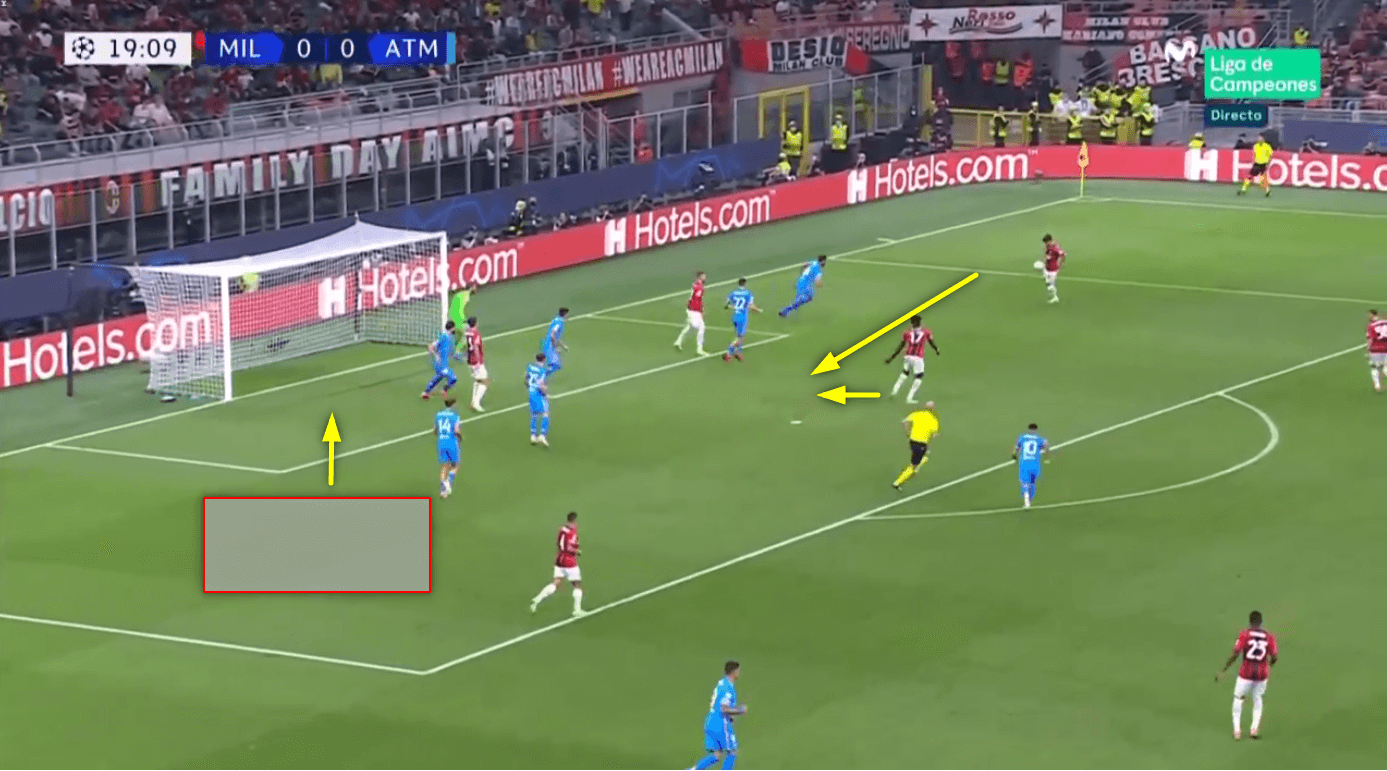 Now that Kylian Mbappe has decided to stay at PSG, the inevitable transfer links between Raphael Leao and Real Madrid were always going to surface. He is young, he excites, he scores goals, and he plays out wide. The speculation of the Portuguese international following in the footsteps of Luis Figo and Cristiano Ronaldo will always remain a possibility.

My recommendation for Raphael Leao is to remain at AC Milan. The league champions have built a strong squad with a good mix of experience and youth.

The club are back in the Champions League, and they have built a particularly good structure off the field to support this season’s success. With Juventus and Napoli both going through transitional periods and city rivals facing Inter still facing financial scrutiny, this could be the start of a successful period for the Rossoneri.

In this scout report, we provided data analysis and tactical analysis to identify the key components of Raphael Leao’s impressive campaign. We have shown the strong points within his attacking play and how they contributed to his performance overall.