On Saturday evening, the eyes of the footballing world were firmly fixed on the San Siro as AC Milan and Internazionale locked horns in the 176th Derby della Madonnina.

It was a high-octane match full of emotion where Milan emerged as 3-2 victors against their crosstown rivals to hand Inter their second Serie A defeat in three matches.

Internazionale started out on top, taking an early lead through Marcelo Brozović. Milan equalized in the first half and rallied to score two more in the second period with Rafael Leão netting his first ever derby goals, while also providing an assist. The Nerazzurri managed to hit back with Edin Džeko and may well have rescued a point were it not for the heroics of Mike Maignan in goal.

On the balance of play, Milan were deserved winners on the night. Stefano Pioli tactically edged his counterpart Simone Inzaghi.

This means the Rossoneri have now won two derbies on the bounce, a feat that was last achieved by Massimiliano Allegri’s title-winning side of 2010/11. It also means that Inzaghi is yet to taste derby glory since his arrival at Inter in May 2021.

This tactical analysis provides insight into how Saturday’s showdown unfolded. The analysis highlights the key aspects and tactics that were on display throughout. 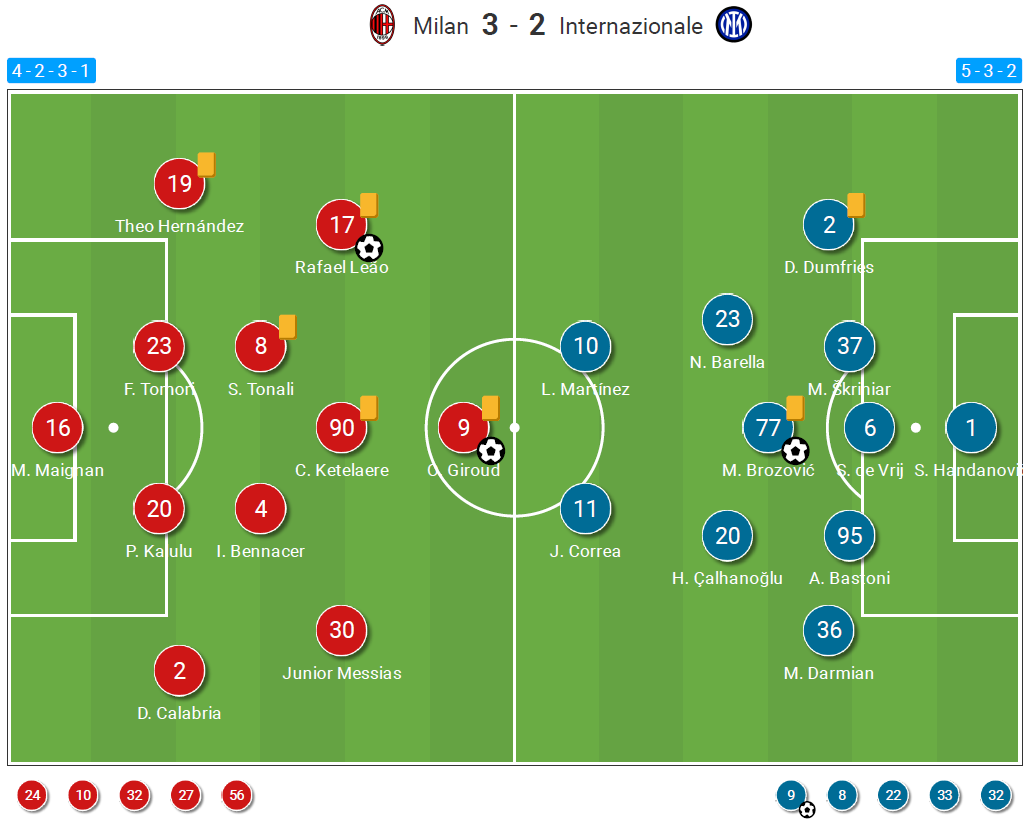 The hosts set up in a 4-2-3-1 formation. Maignan started between the sticks, and the solid partnership of Fikayo Tomori and Pierre Kalulu played in the heart of the Milan defence. Sandro Tonali and Ismaël Bennacer anchored the midfield and it was Olivier Giroud who led the line.

Inter played in their accustomed 3-5-2 system. Milan Škriniar’s future was now certain and he started alongside Stefan de Vrij and Alessandro Bastoni in central defence. Denzel Dumfries and the conservative Matteo Darmian provided the width. Hakan Çalhanoğlu lined up against his former club while Joaquín Correa partnered with Lautaro Martínez as Romelu Lukaku missed out through a thigh injury.

Inter start out on top

Inter set-up in a low block, an approach that was hugely unfamiliar during Inzaghi’s tenure at the club as the manager usually sends out his team to dominate possession and dictate the flow of the game.

High wingbacks are key to Inzaghi’s attacking dynamics. However, Darmian got the nod over the more attacking Gosens on the left while Dumfries was asked to stay back and assist Škriniar against Rafael Leão on the opposite flank.

Inter used their back three in their build-up from the deep and Milan pressed them in their 4-2-3-1 shape. Giroud and the two wingers covered the three centre-backs man for man, De Ketelaere marked Brozović with Bennacer and Tonali closing down Inter’s 8’s in Barella and Çalhanoğlu. This left Inter’s wingbacks free; Milan’s fullbacks would quickly step out once they receive the ball out wide. 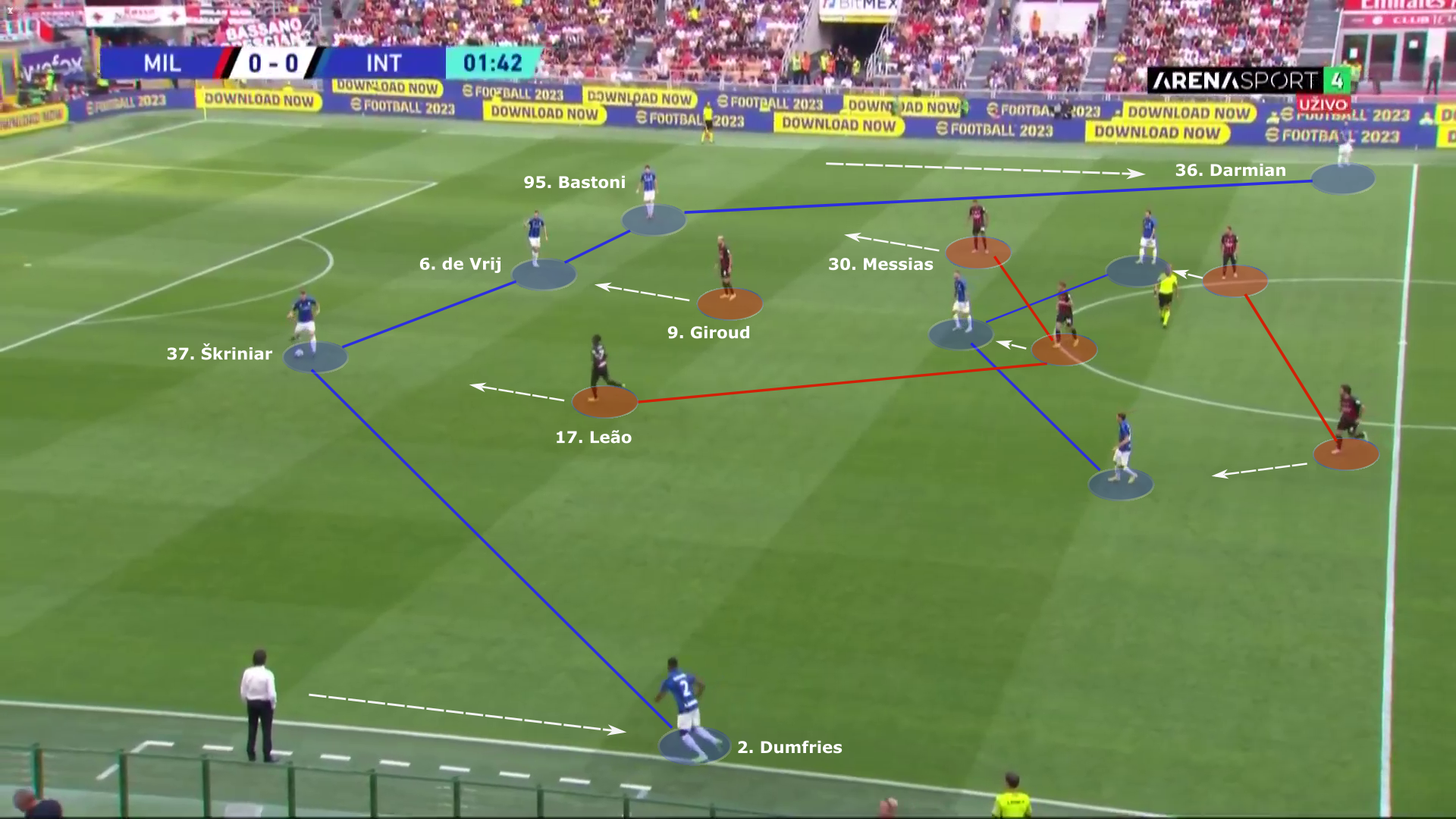 An early theme of the game was Correa and Lautaro dropping into midfield to receive balls from wide areas and to drag out one of the centre-backs.

Dumfries receives and Theo pressures him. Barella drifts into the space vacated by Theo which in part opens up the passing lane towards Lautaro, who has gained a split second over Tomori. 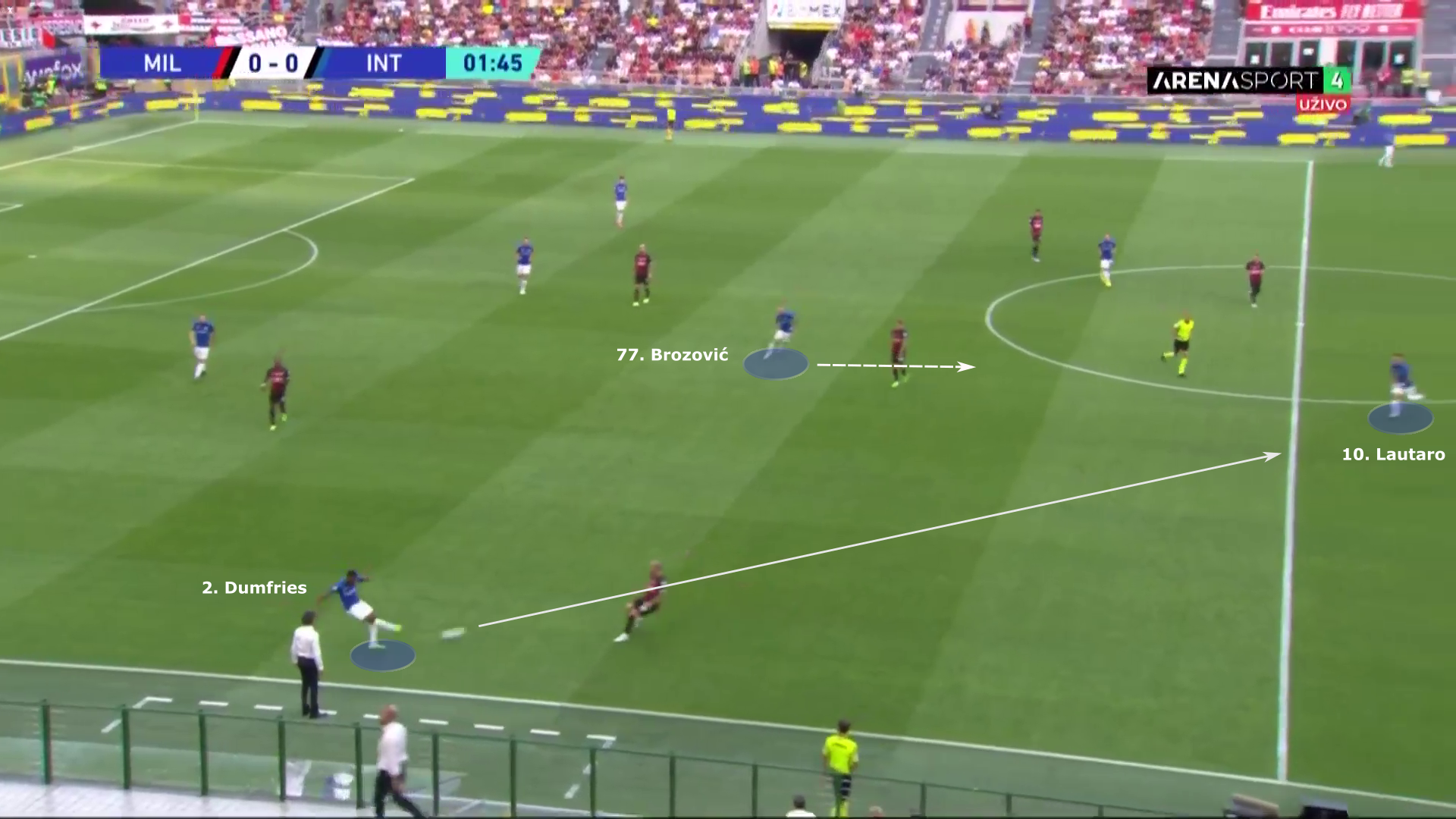 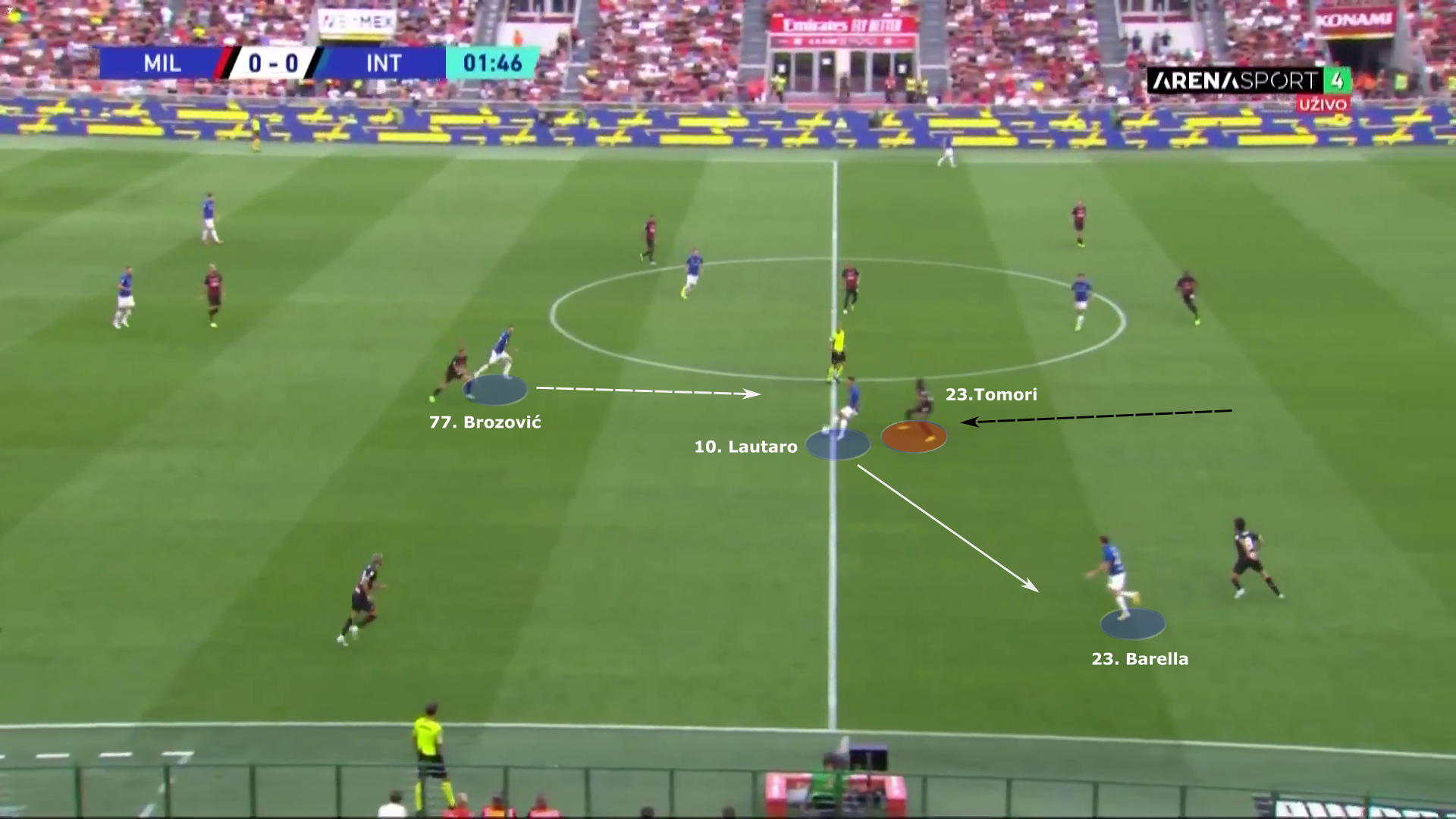 As Lautaro controls and Tomori steps out, space is available in behind, but Barella does not exploit it by making a run towards the goal. Notice Brozović’s surge forward, which was a recurring theme in the first half and played a crucial part in Inter’s first goal.

Barella gets the ball but his touch takes him backwards and Milan have time to reorganize. 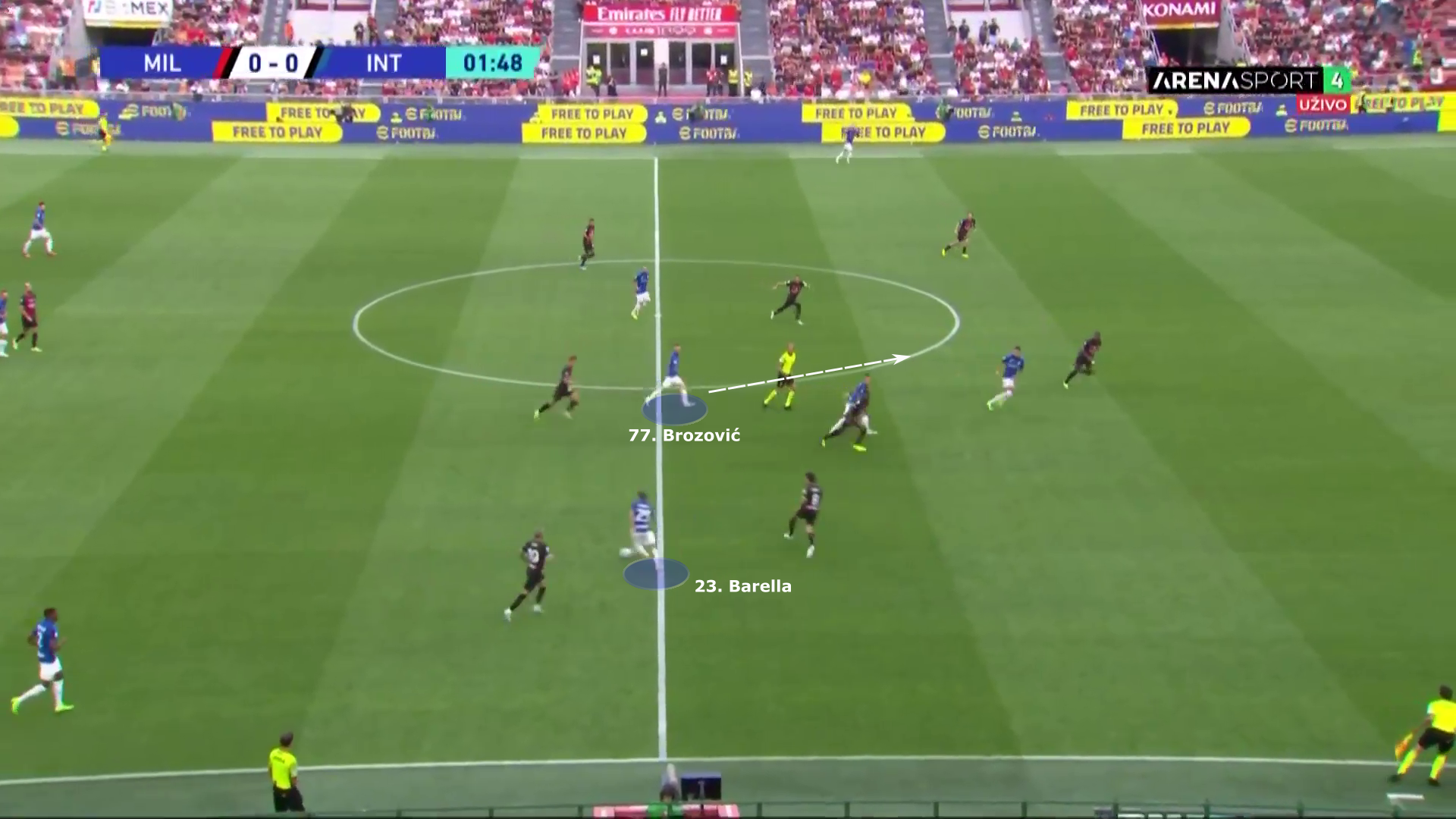 On other occasions, it was Correa who dropped into midfield and offered a free passing option. Even from throw-ins, the pair provided the outlet for Inter to progress the ball and lure out Tomori or Kalulu and create space in behind the defensive line. 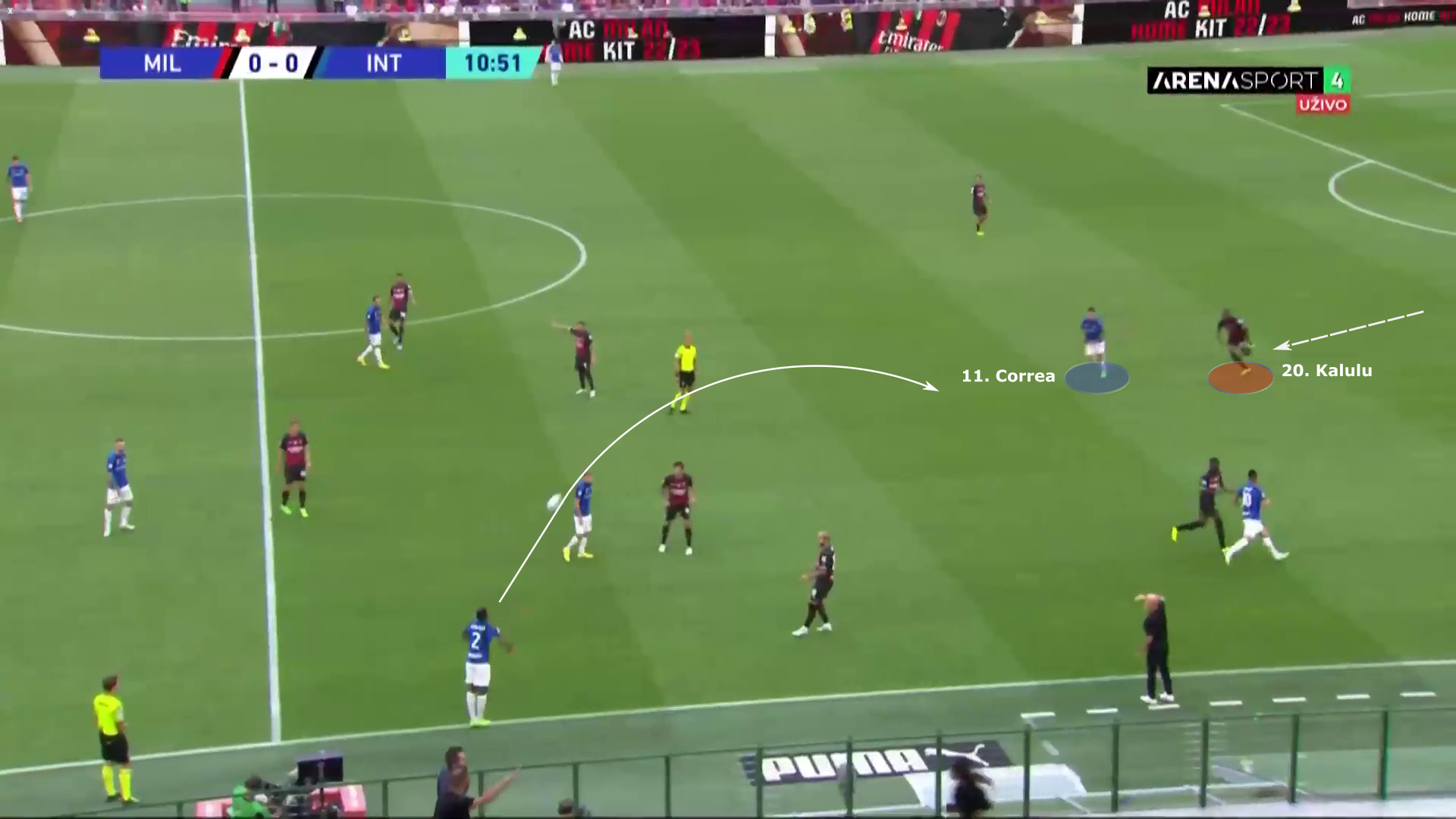 The Argentine makes a swift change in direction and allows the ball to bounce over Kalulu. 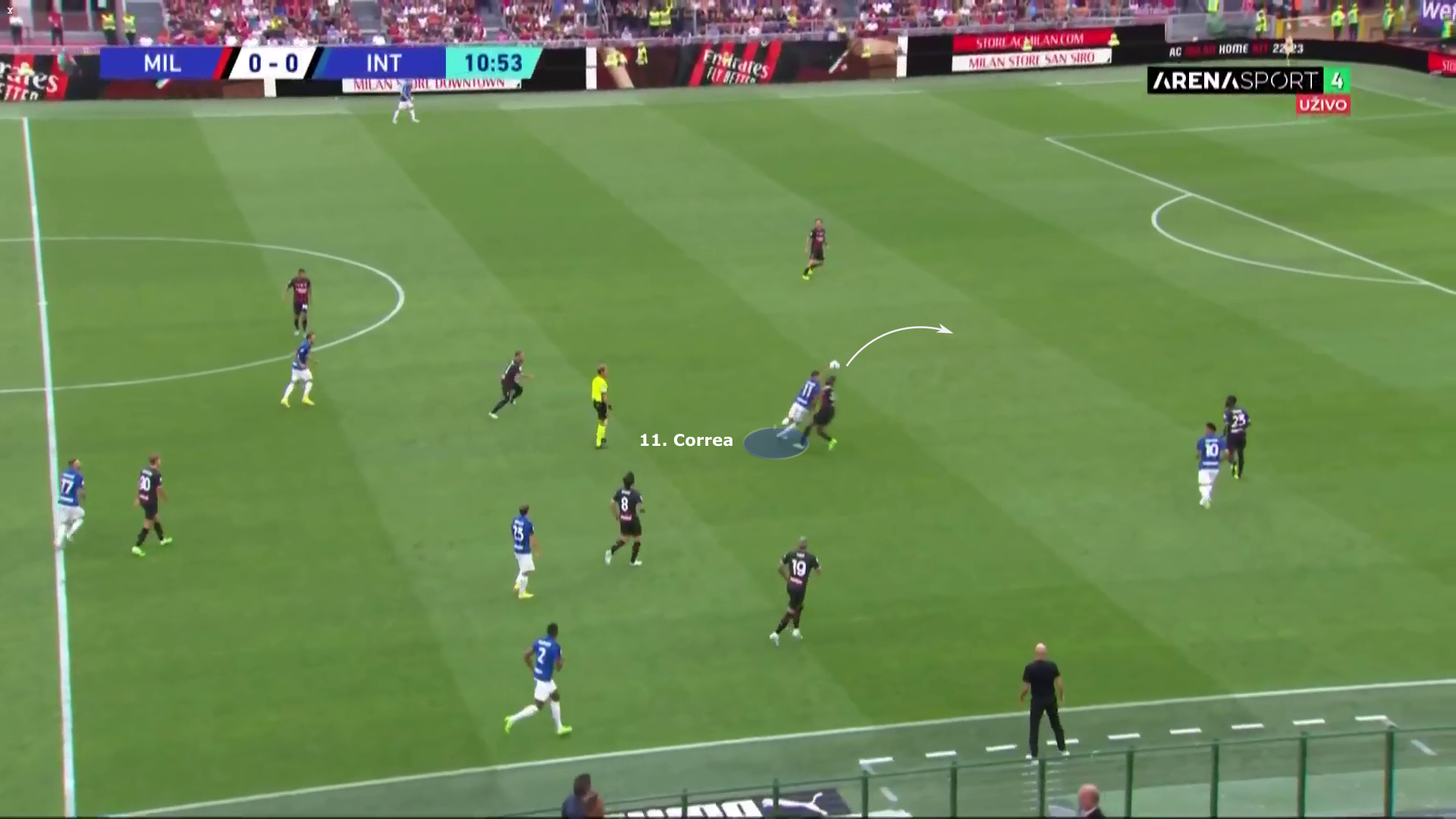 He glides forward and has Darmian in support but the pass is too short and Calabria manages to intercept. 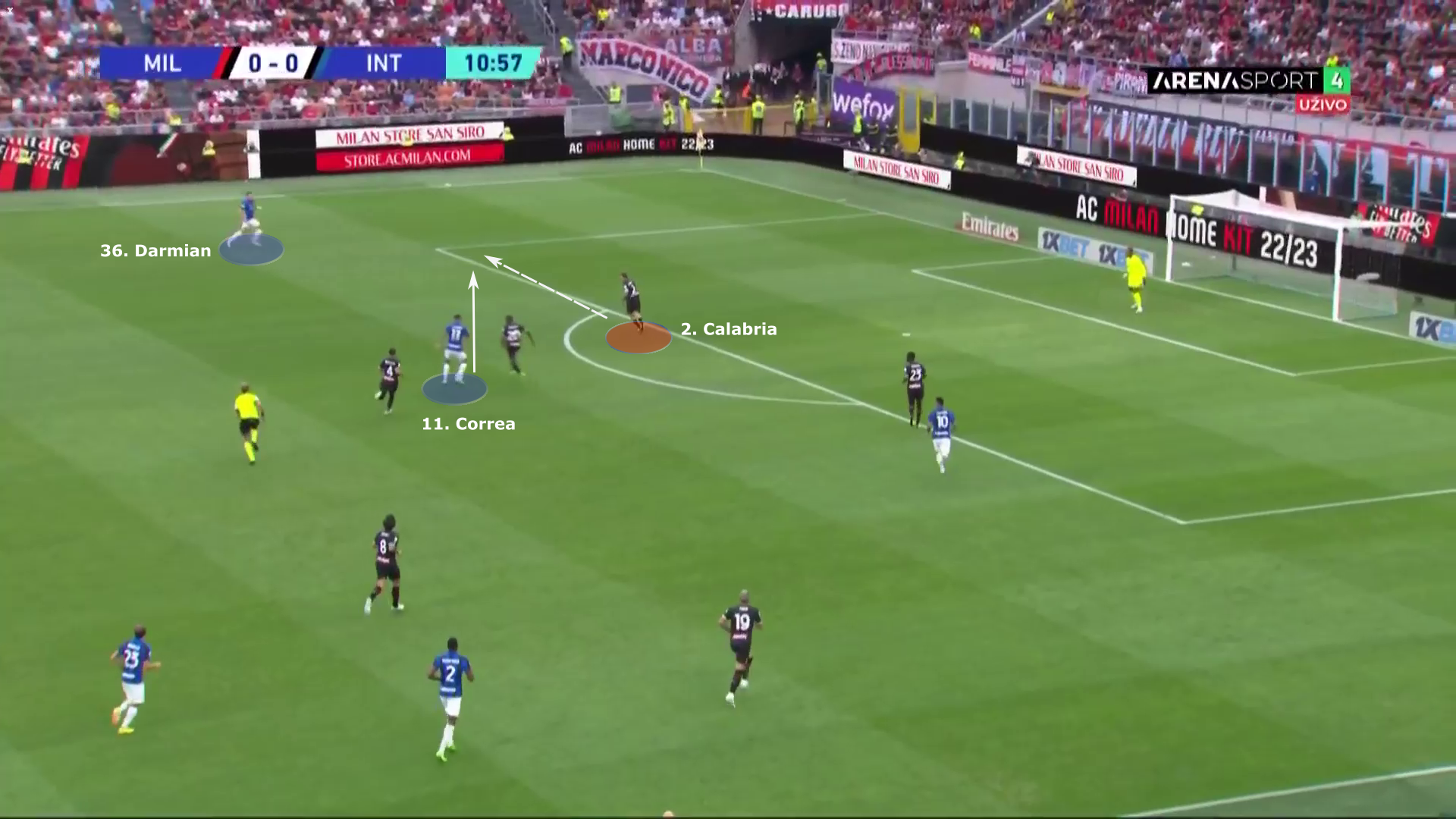 And that is how Inter took the lead in the 21st minute. Correa drops to overload the midfield 4v3 in Inter’s favour, forcing Tomori out of position past the halfway line. Tonali and Bennacer are covering Barella and Çalhanoğlu. Handanović manages to find Correa from the back. 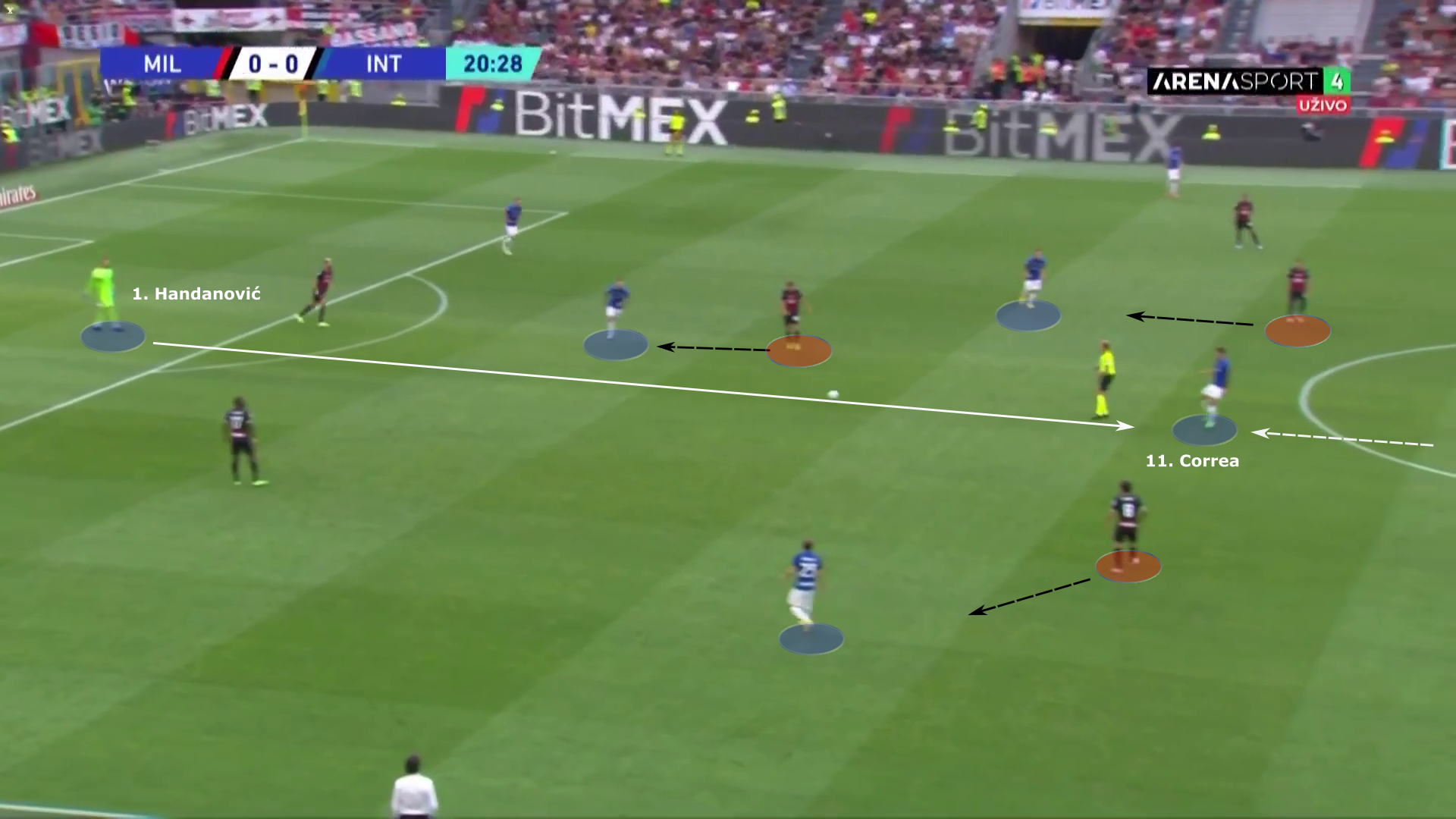 A flick from the Inter forward finds its way to Lautaro, who holds the ball until Brozović starts his run. 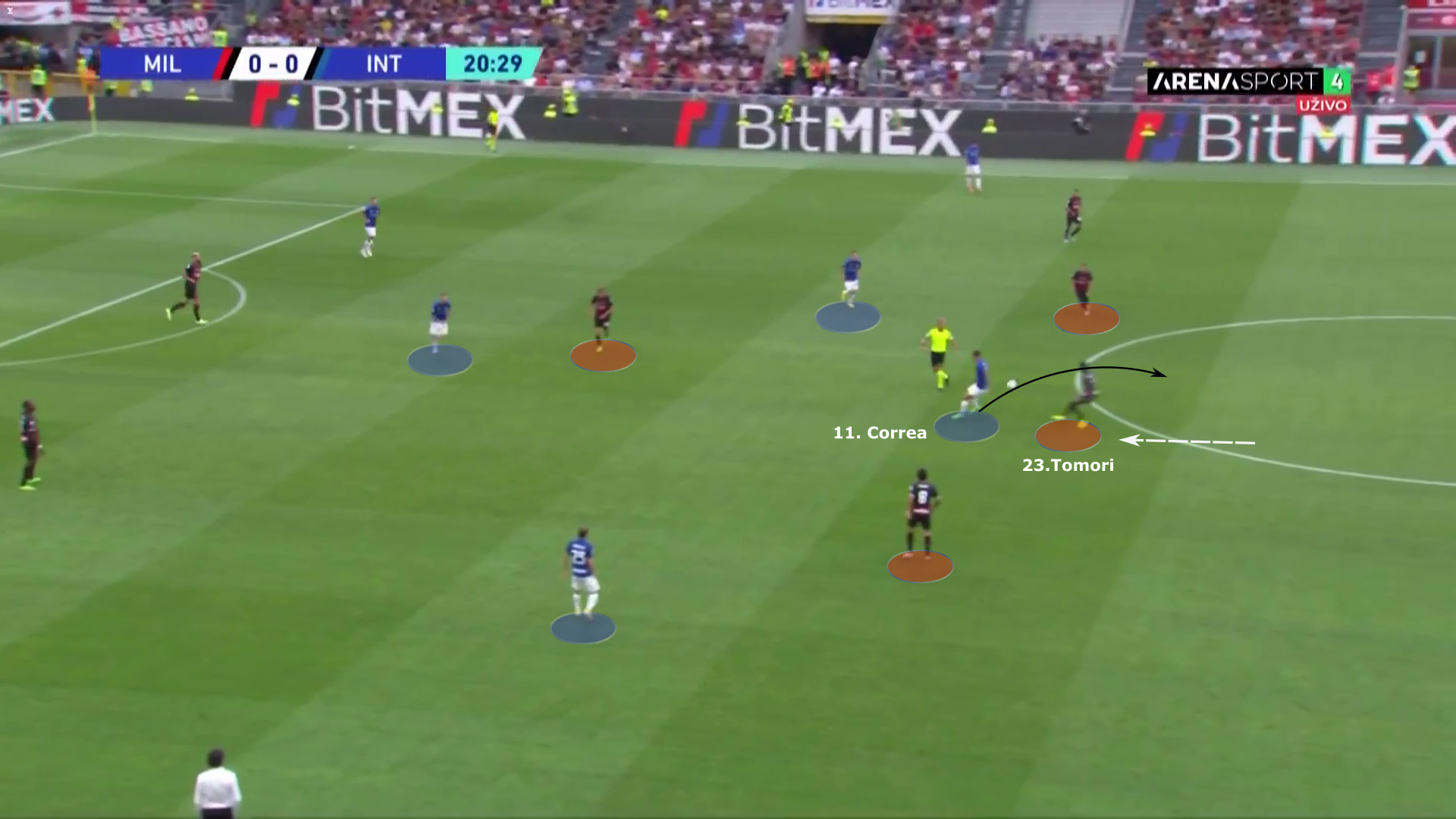 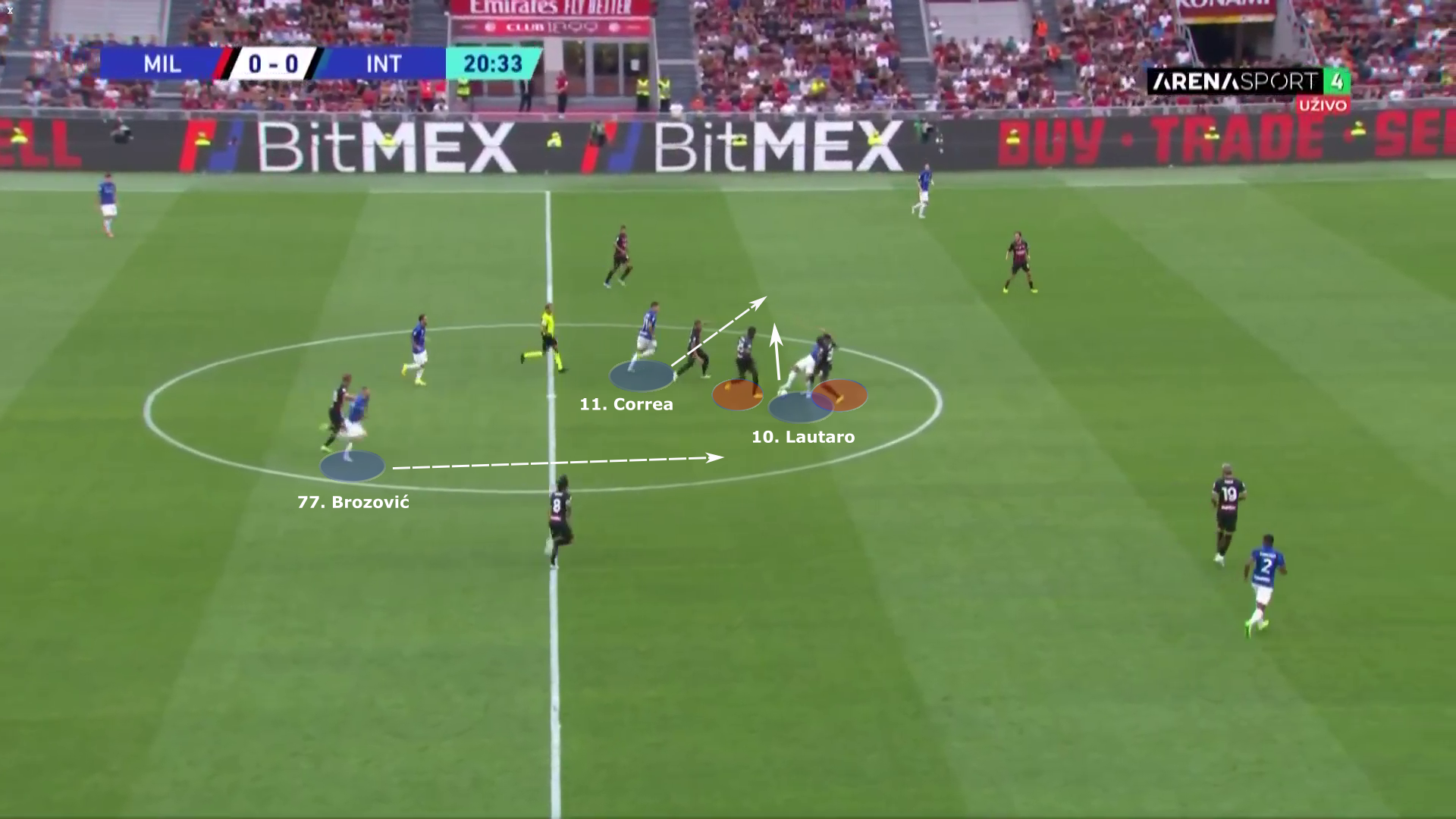 Martínez, who has dragged Kalulu out as well, lays it off into Correa’s path. He controls and finds Brozović to set him up 1v1 with the keeper and score. Milan’s two centre-backs (highlighted in red) have been sucked into Inter’s trap. 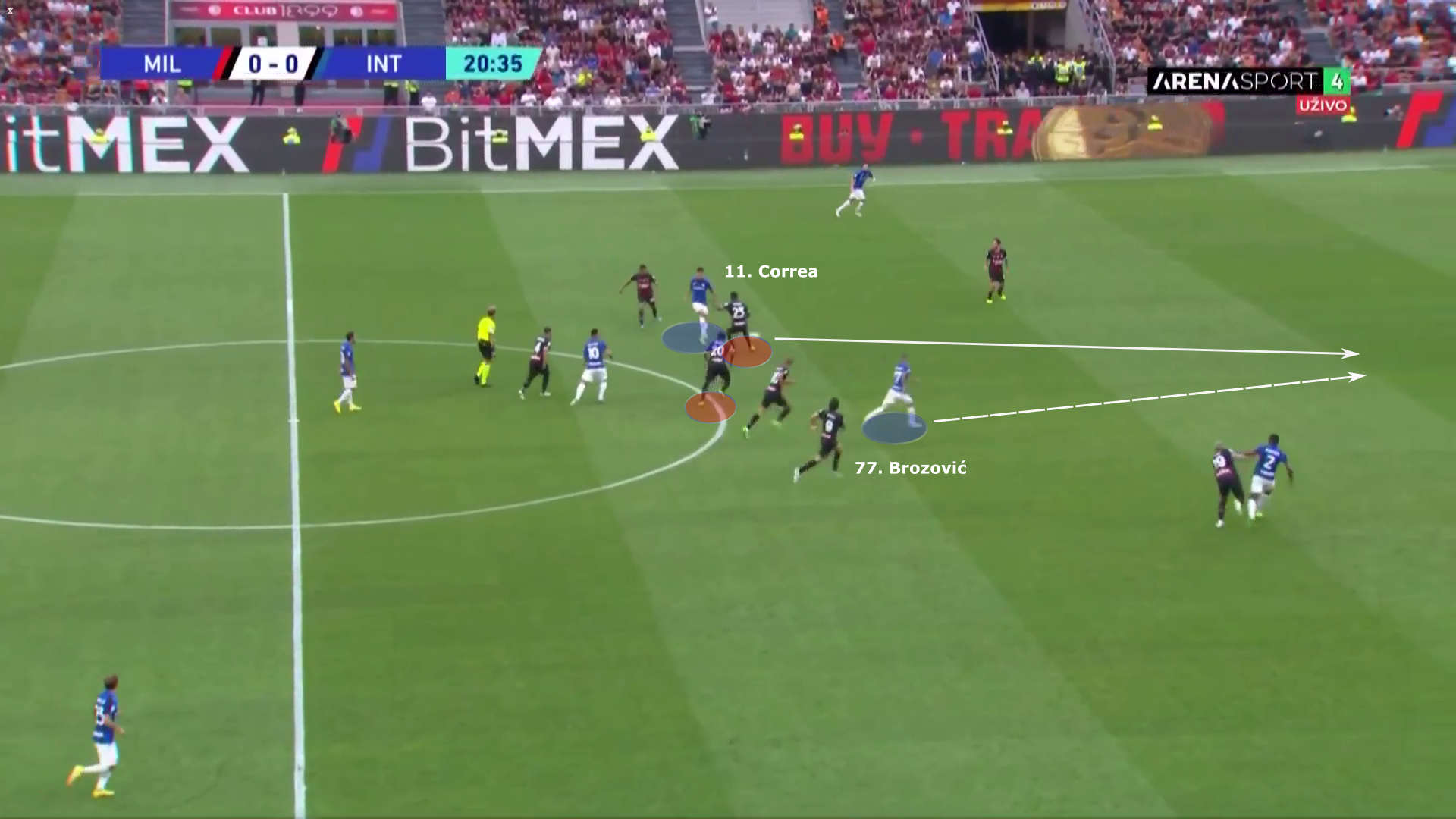 In the build-up to the derby, Stefano Pioli used a special trick to get his players fired up. The manager hung a photo of Çalhanoğlu with the quote ‘We have fire inside’, which the Inter man used last weekend, in the locker room at Milanello. The Turkish international has aimed several digs at Milan since he left the club on a free transfer for the city rivals.

To boil the tensions even further, Çalhanoğlu refused to shake the hand of former teammate Theo Hernandez pre-match.

It was only ironic that Çalhanoğlu’s miss-hit pass to Correa led to Milan levelling the scoreline. In that situation, the overload in Inter’s favour was still present and Correa was free to receive in the middle. 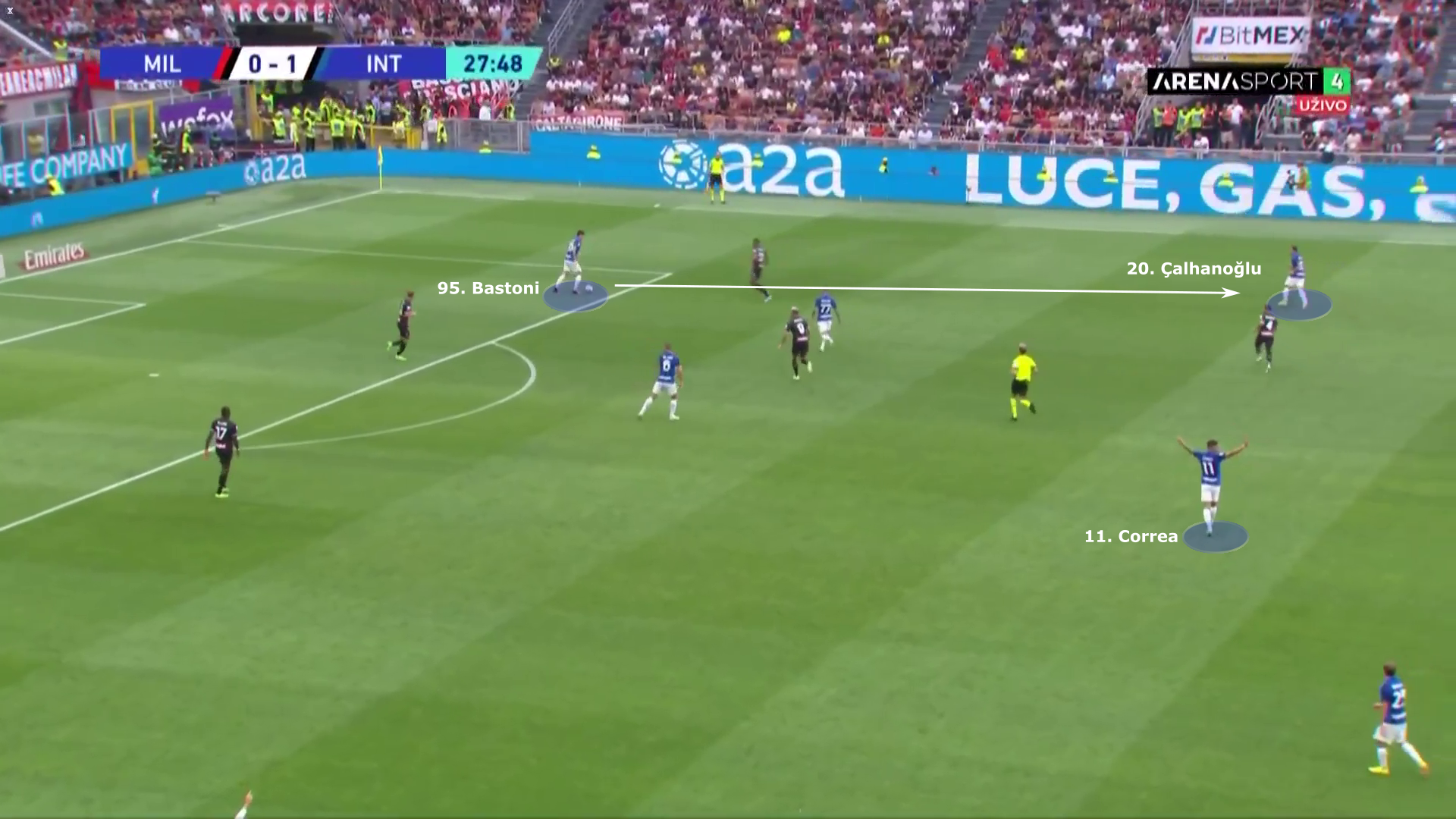 Bastoni finds Çalhanoğlu in the left space. But the Turk’s pass into Correa is off the mark and Tonali pounces on the mistake. 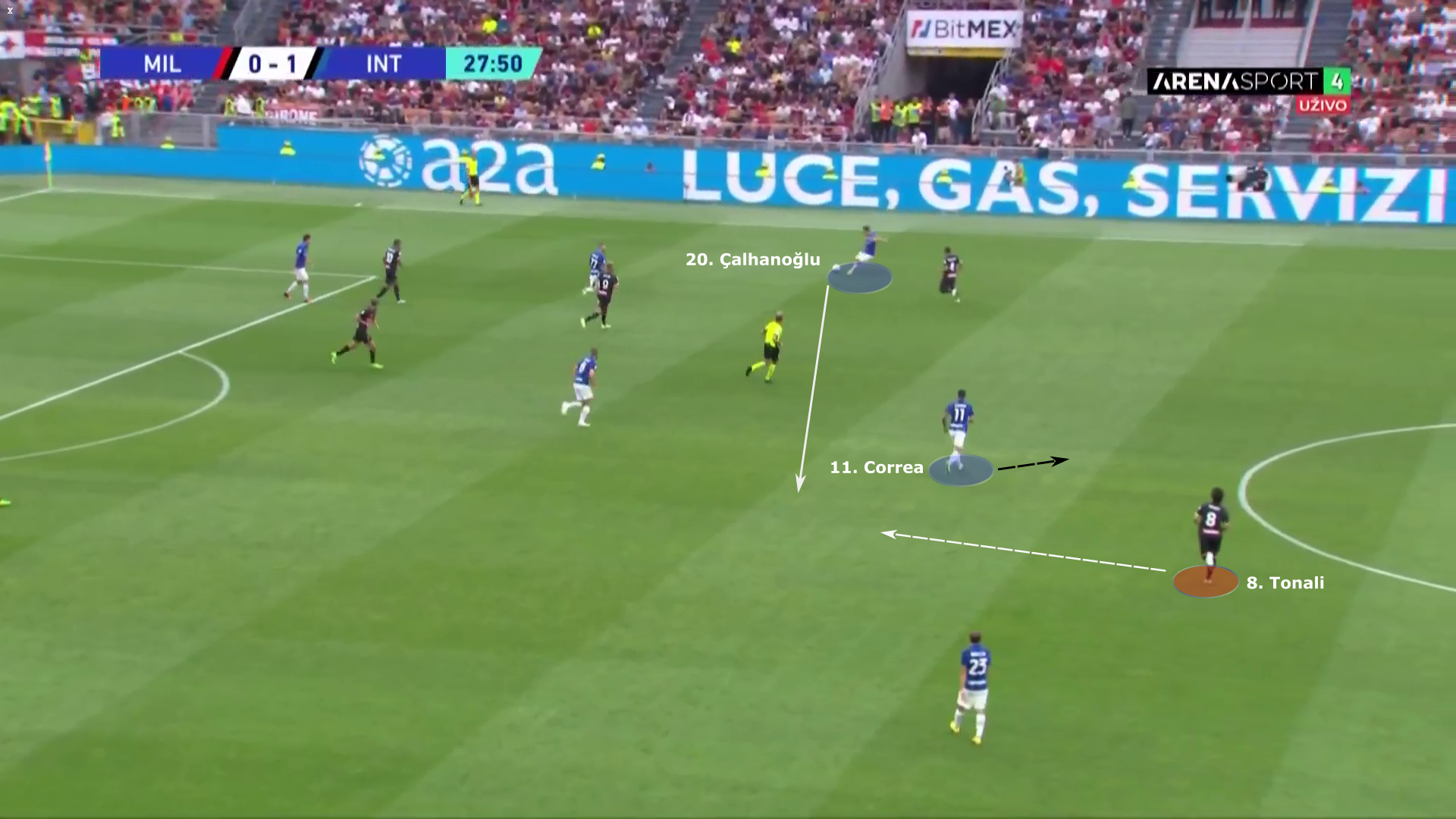 Milan’s No.8 intercepts and drives forward towards the box looking to break. 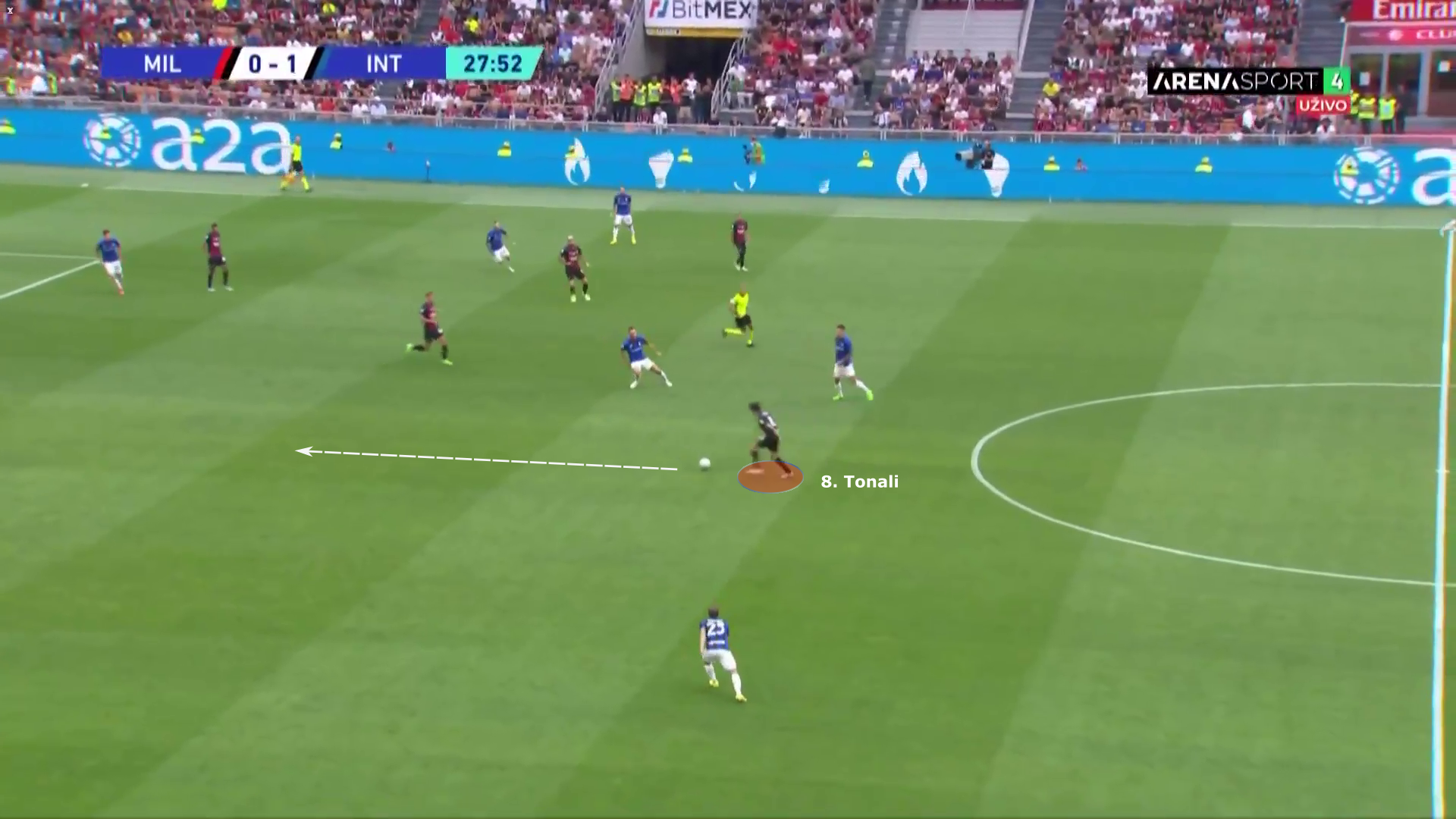 Tonali sets up Leão for an emphatic left-foot finish to make it 1-1. The stadium erupts! 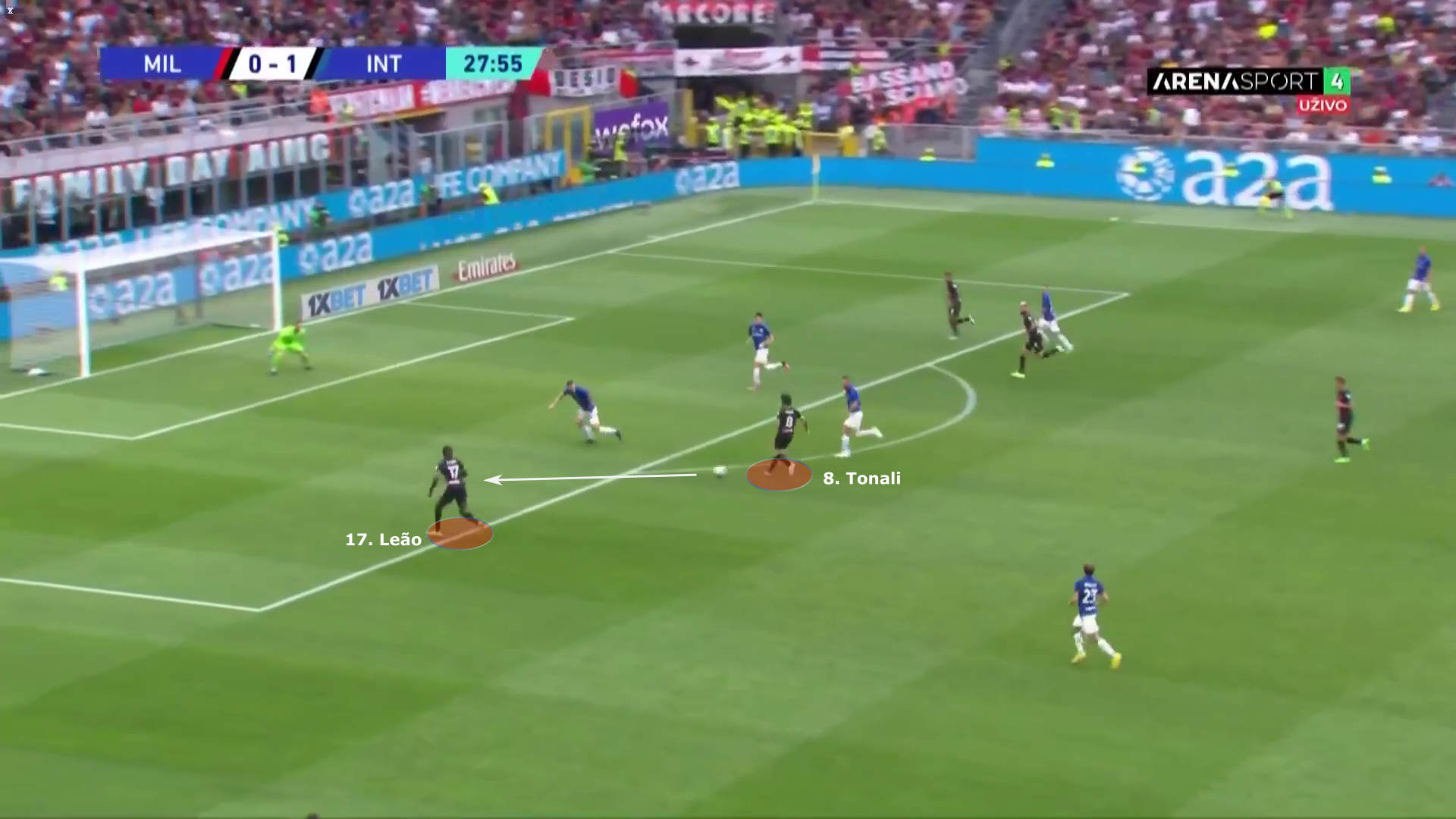 This made it difficult for Milan to progress the ball in central areas of the pitch and forced them to build from wide. When this occurred, Inter would apply a 5-2-3 press meaning Milan’s attacking outlets became severely man-marked.

How were Milan going to progress play from the back?

Piolo used Tonali to split the fullback and centre-back on the left-hand side. This allowed Milan to form a make-shift back three, creating a numerical advantage over Inter’s front two press. Bennacer took up the responsibility of acting as a lone 6. 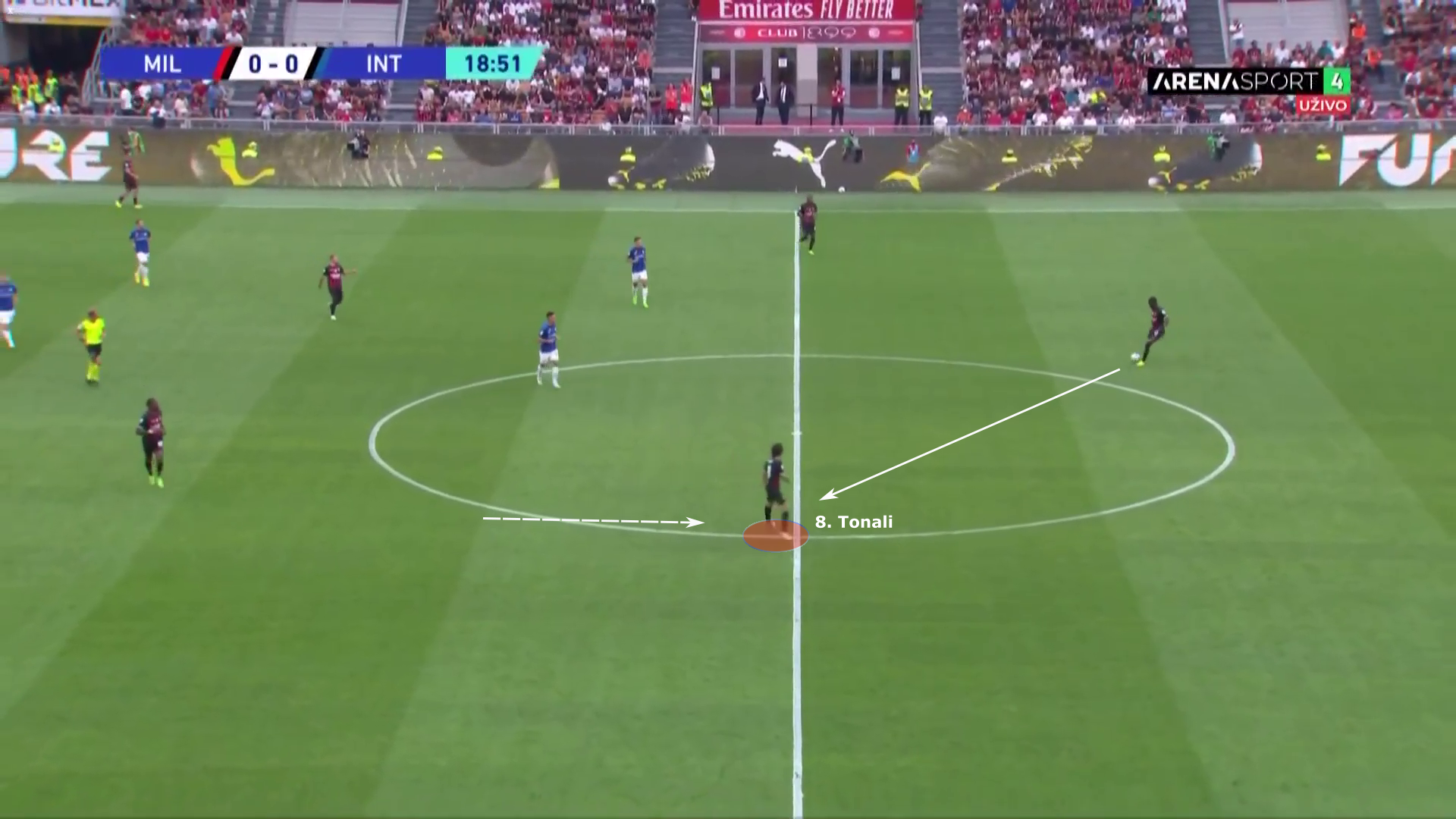 From there, Tonali looked to make runs in between Škriniar and de Vrij. Leão pulled Škriniar out of position while Theo pinned Dumfries out wide. The Theo-Tonali-Leão triangle and rotations were essential to Milan’s attacks. 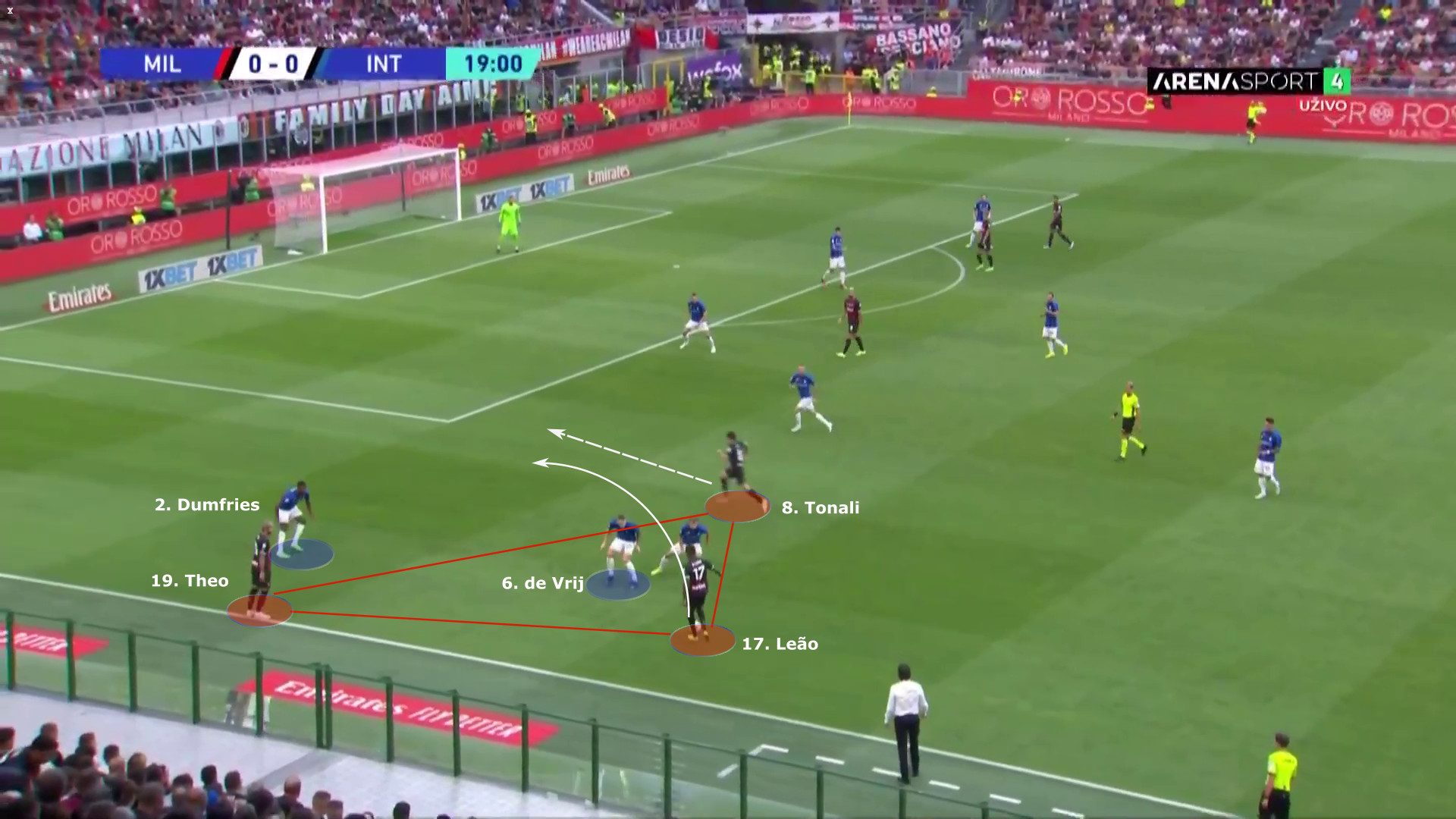 These runs from Tonali were also effective to bring Milan up the pitch in the build-up to the team’s second and third goals in the second half.

Tonali had another important role which was dropping into the left-back space when Theo moved upfield. 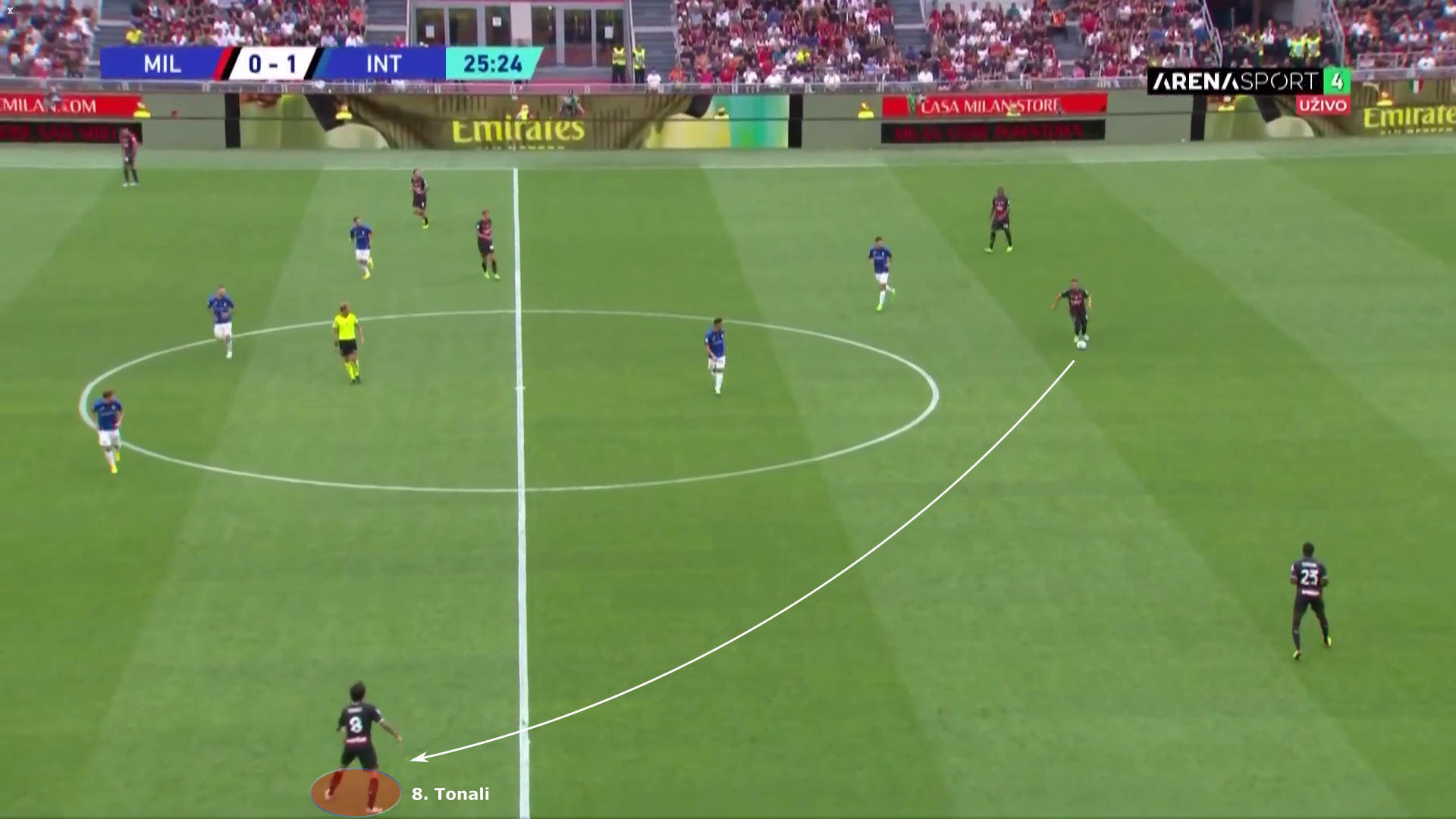 With Inter defending in the 5-3-2 – and Leão and Theo occupying Škriniar and Dumfries – Tonali had more time and space on the ball. 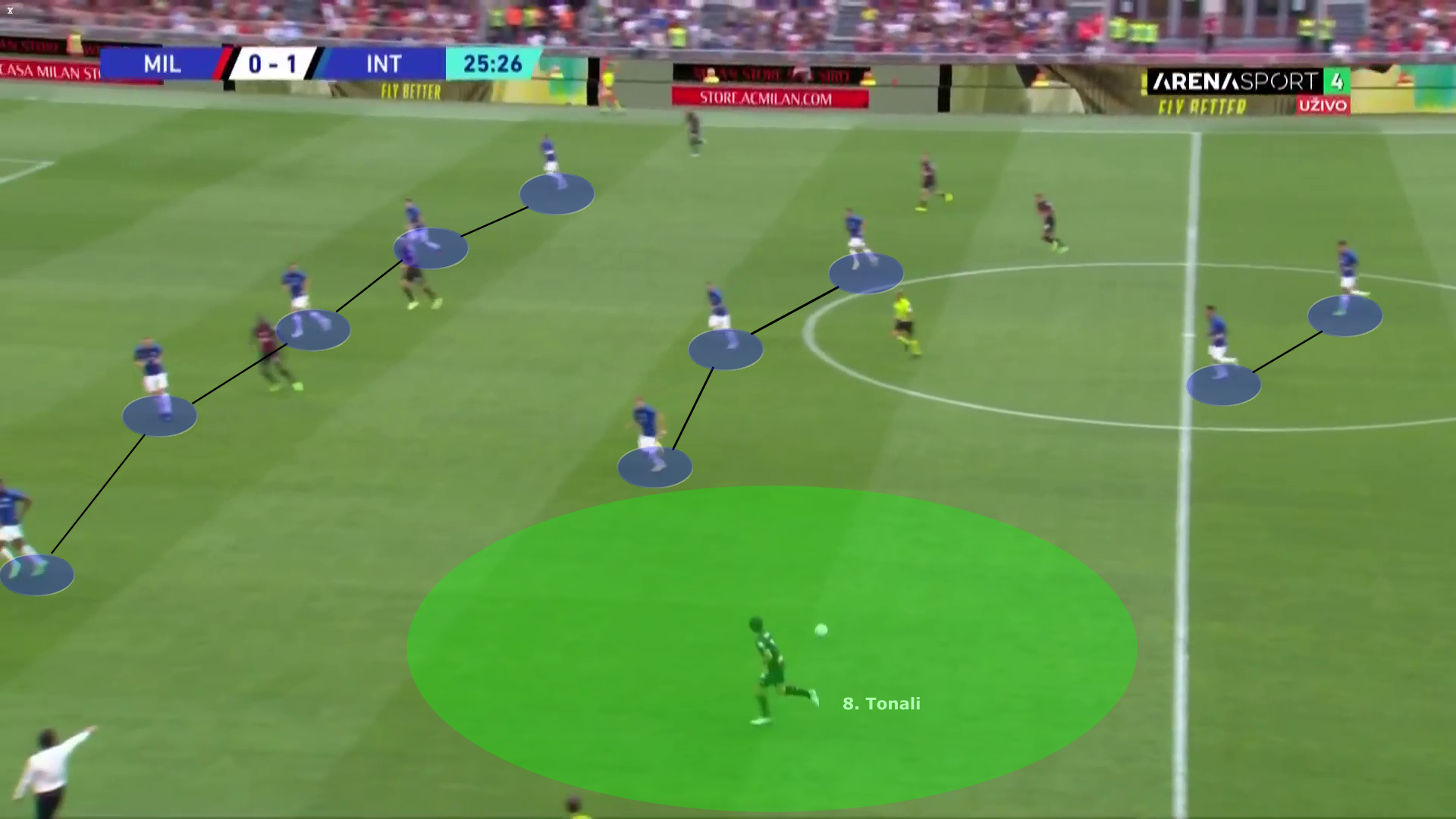 Barella cannot commit and vacate the midfield area, leaving Tonali with time to whip crosses into Giroud’s path and create danger inside the box. 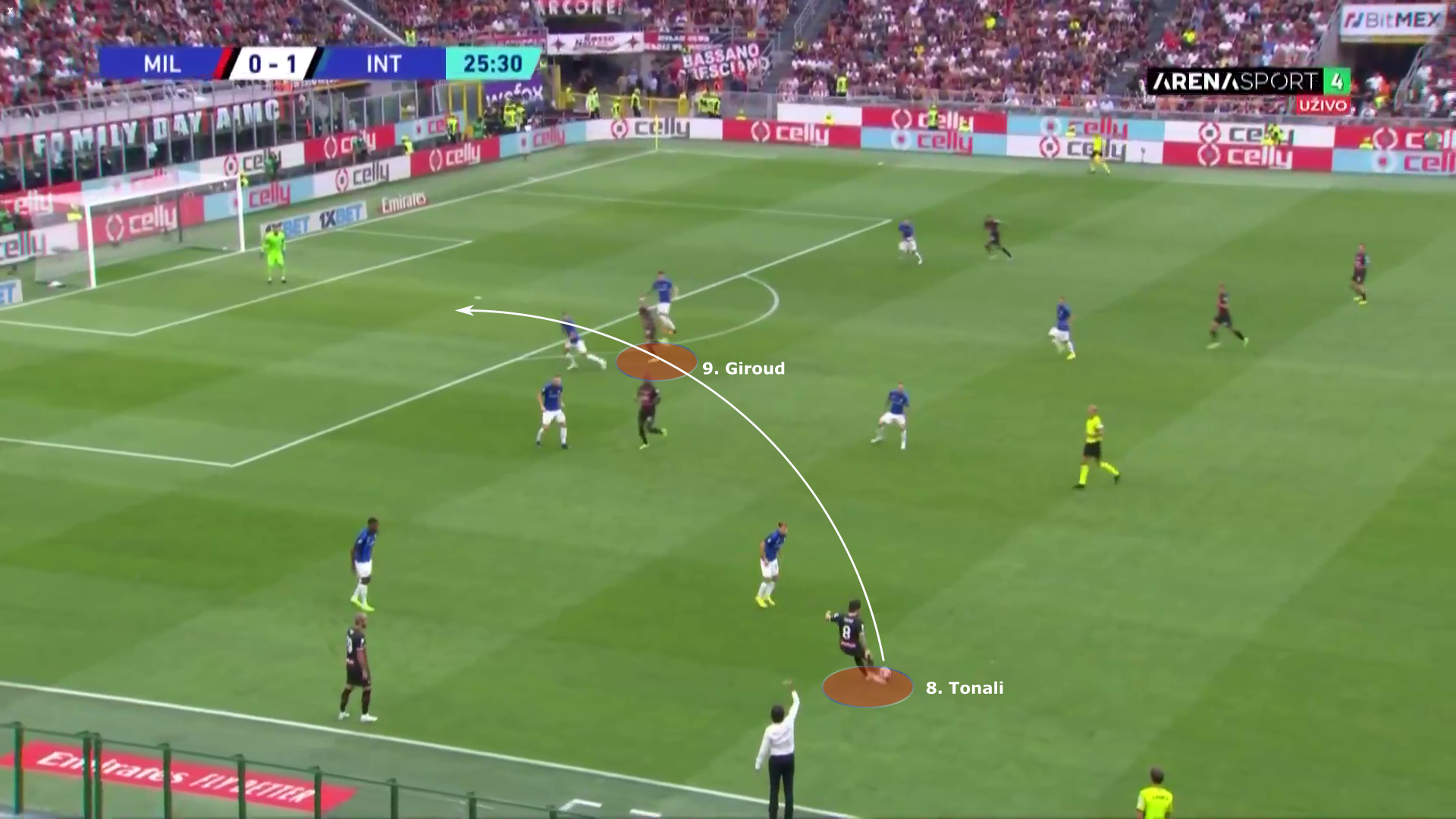 This occurred on numerous occasions throughout the game. Sometimes, it would be Tonali roaming forward to pull out Škriniar and Leão tracking back to drag Dumfries; creating more space for Giroud to move into. 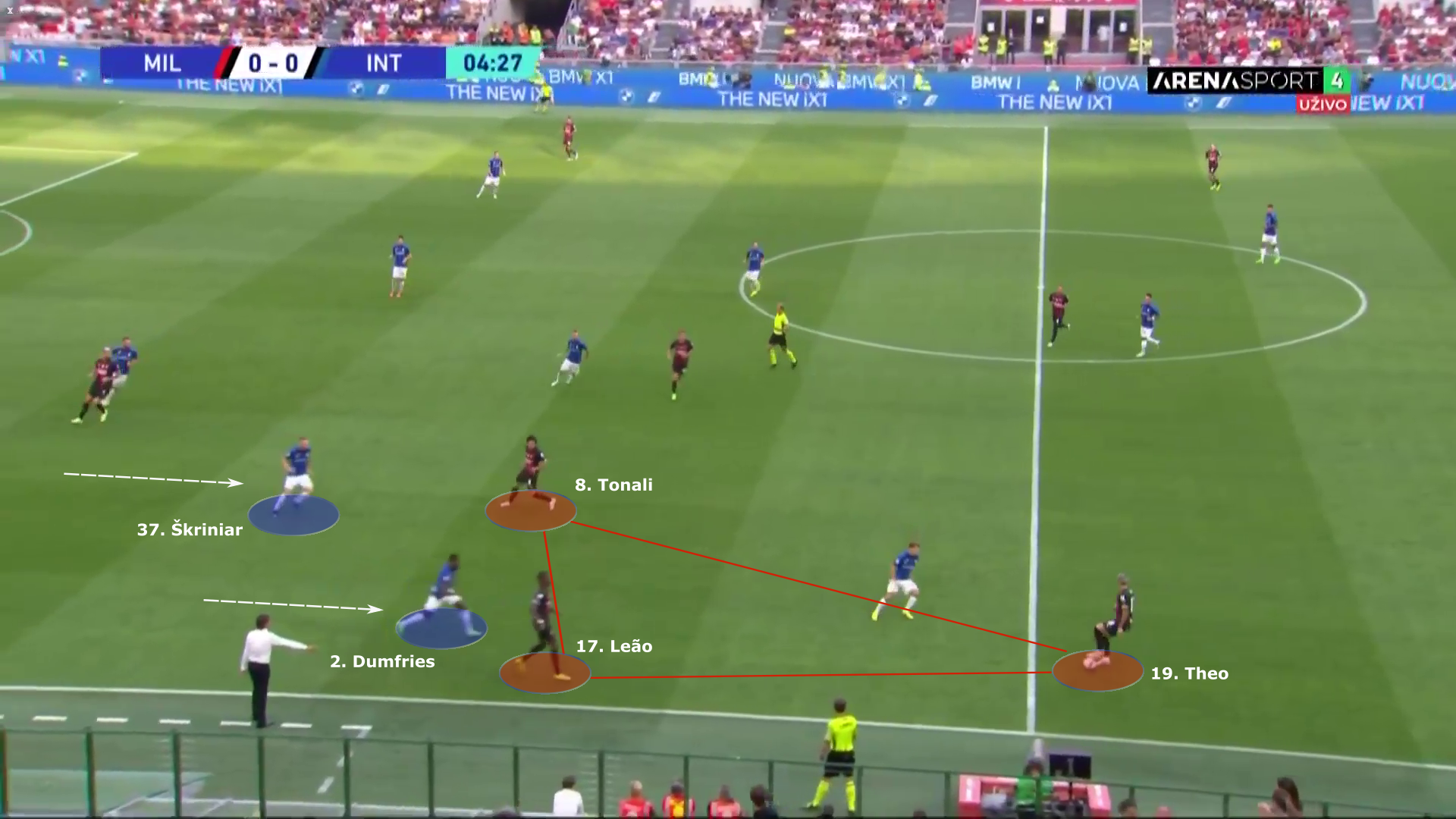 “We had prepared to open things up a little bit more on the left to pull Inter’s players away from the middle,” Pioli explained. “At times we did it well.”

Tonali’s pass map highlights his dominance on the left side. He played 2 key passes and only misplaced one ball.

From then, it was up to the individual ability of players like Leão, together with other Milan players attacking the box, to tear apart Inter’s three centre-backs positionally.

AC Milan dominated the second half and scored immediately thanks to Olivier Giroud, the same player whose brace in the derby in February defined the Scudetto race last season. 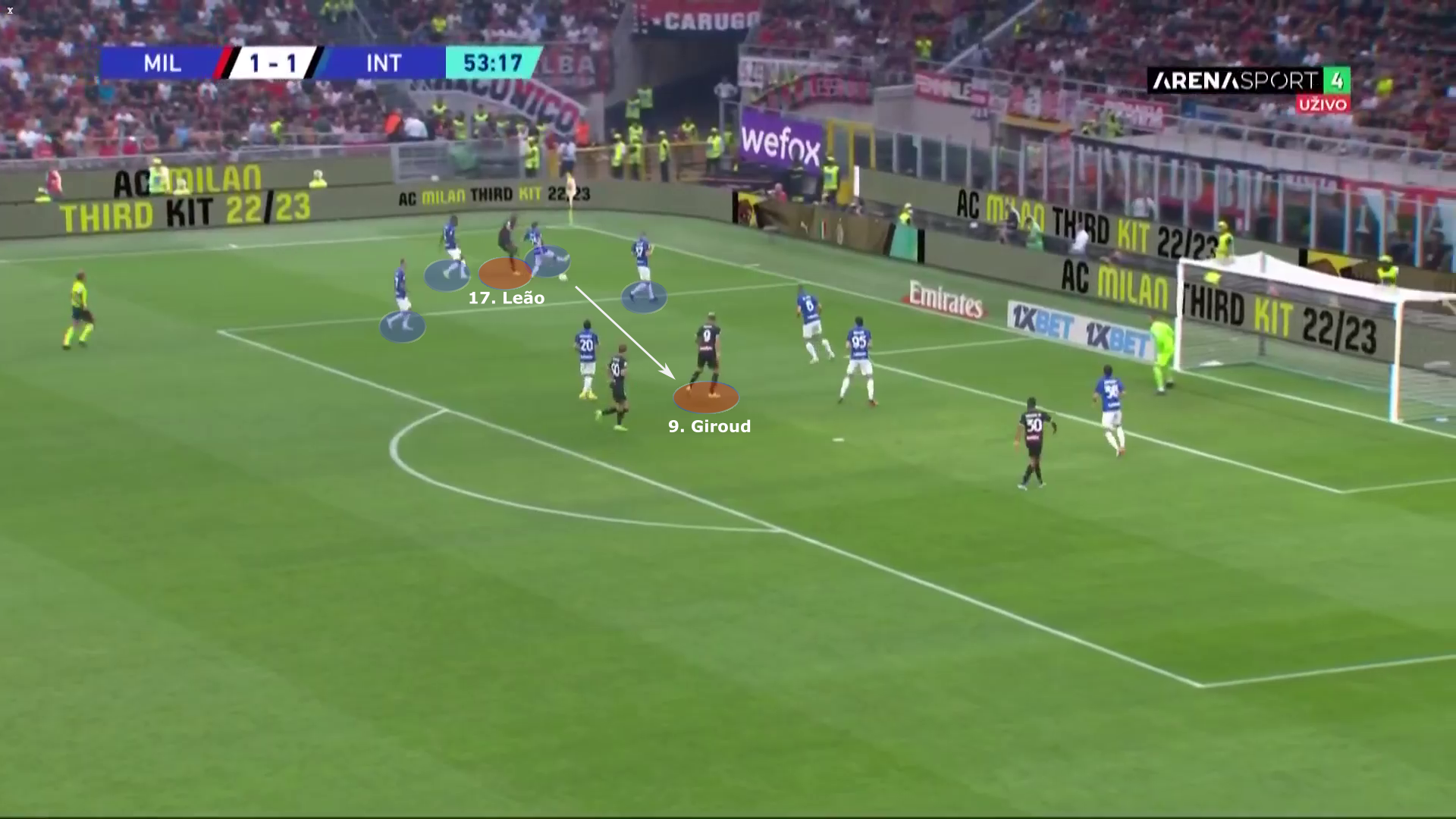 Four Inter players surround Leão but he manages to find an unmarked Giroud in the box to give Milan the lead.

Inter found themselves in a 3-1 deficit, Inzaghi had to change something. He made a triple substitution, bringing on Henrikh Mkhitaryan, Edin Džeko and Federico Dimarco for Barella, Correa and Bastoni.

They managed to get back in the game, using their wingbacks to stretch the pitch and put crosses into the box.

Darmian and Mkhitaryan, former Manchester United teammates, combine well on the left and Darmian finds Džeko in the middle to make it 3-2. 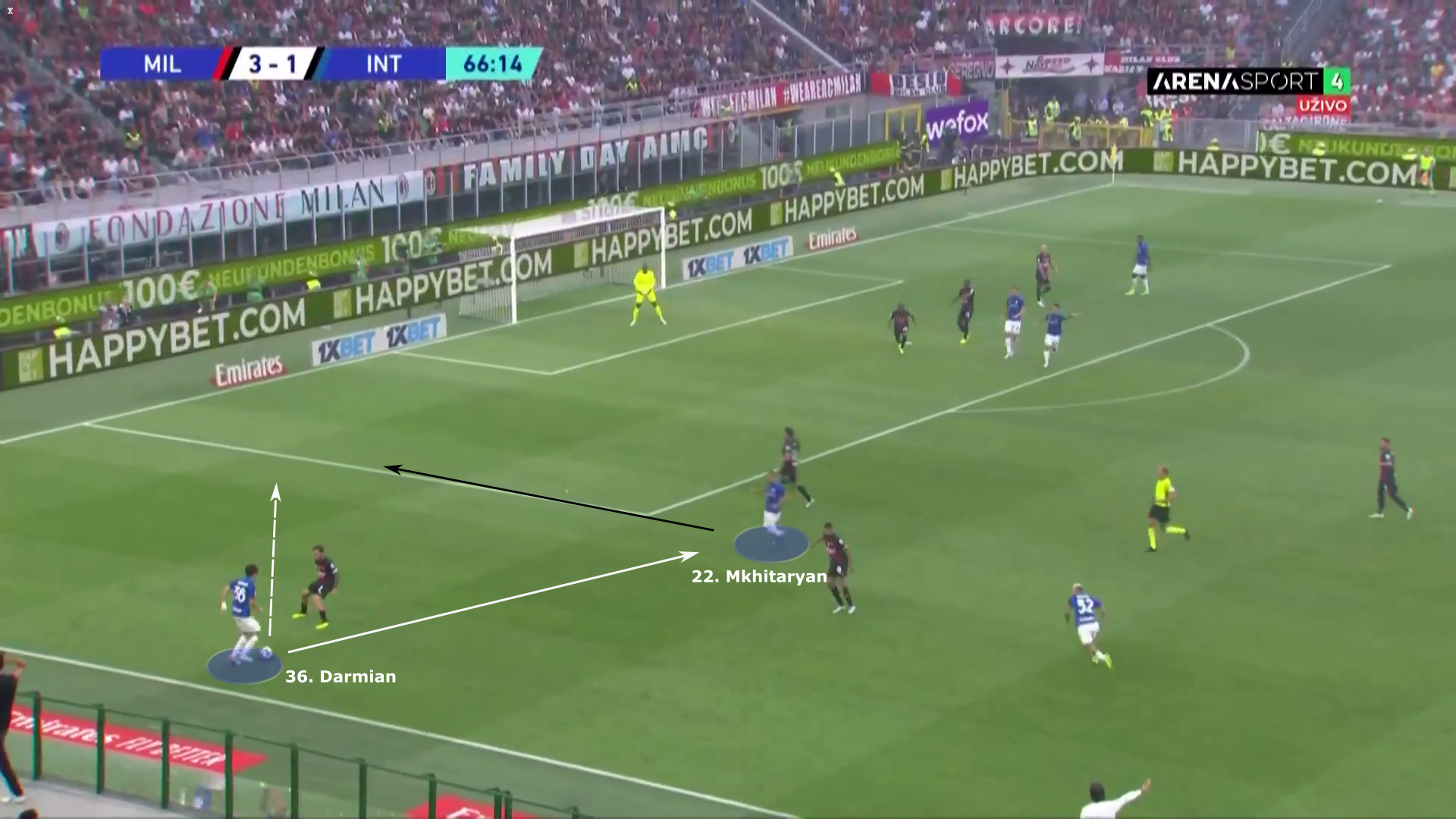 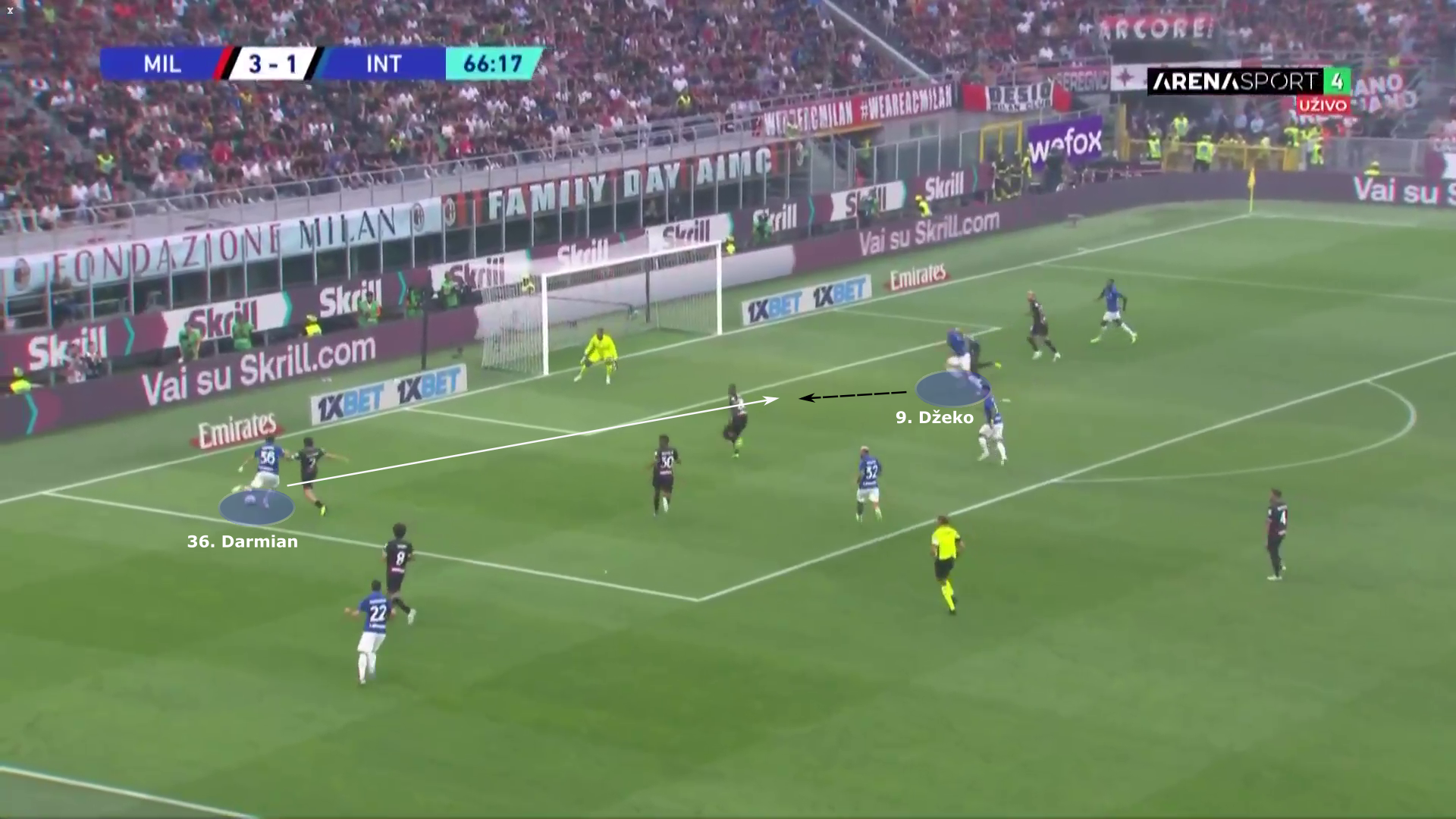 After that, the Nerazzurri attacked and fought with everything. They took risks and threw people forward in order to find the equalizer.

Pioli quickly moved to a back five by bringing on Simon Kjaer and moving Alexis Saelemaekers to right wing-back in a bid to see out the game. 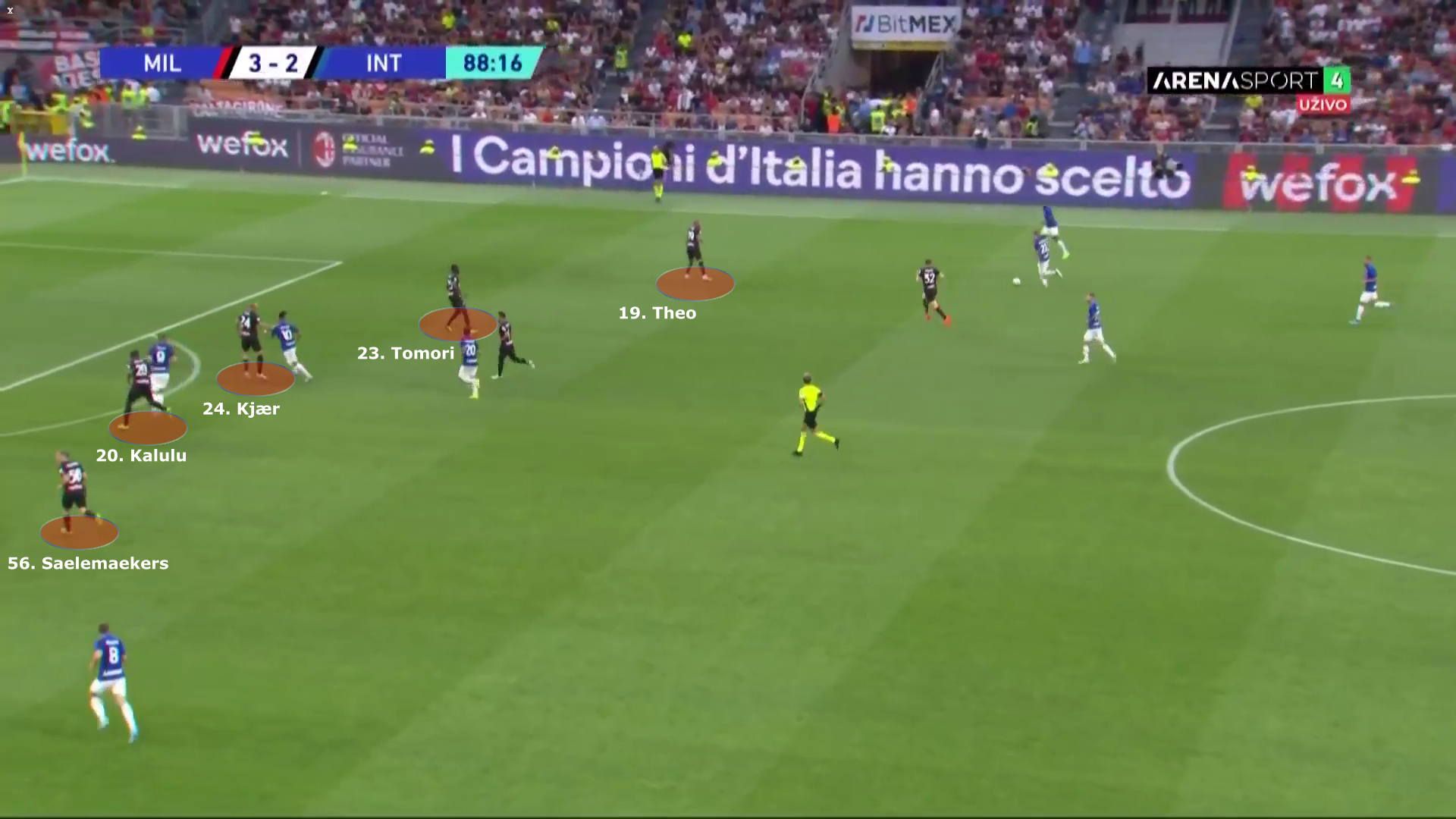 The sole reason, however, why Milan managed to see the game through and snatch the three points was Maignan’s vital saves. Maigan’s influence on last season’s title triumph cannot be understated and after saving a penalty in midweek against Sassuolo, he produced more world-class saves from Lautaro and Çalhanoğlu to preserve Milan’s lead.

The stats showcase how finely poised the game really was:

Winning this game will give all Milanistas a sense of pride and encouragement that they are in good shape to defend their Serie A title. The victory leaves Milan 3rd in the table, two points behind leaders Atalanta and sees Inter drop into 8th, having lost against Lazio a week and a half ago.

There is not much time to cheer or dwell though, as Milan travel to RB Salzburg and Inter host Bayern Munich on matchday one of the UEFA Champions League on Tuesday and Wednesday night respectively.