Hearts made an impressive return to the Scottish Premiership in 2021/22, finishing as the best of the rest behind Celtic and Rangers and securing European football for next season.

Their impressive campaign also saw them make it to the Scottish Cup final last month, losing out in extra-time to Europa League finalists Rangers.

The key to their successful return to Scotland’s top flight has been smart recruitment. In this tactical analysis, we will look at one of their signings from last summer who has played a big part in their success, Australian midfielder Cameron Devlin.

One of two recent signings from the A-League by Hearts, Devlin’s combative displays in the Hearts’ engine room have caught the eye throughout the season.

Deployed in central midfield and defensive central midfield in Robbie Neilson’s two primary formations this season, 3-4-3 and 4-2-3-1, Devlin is a box-to-box midfielder who is an aggressive tackler and energetic presser. He is also secure in possession and can make an impact in the final third.

This scout report will be an analysis of Devlin’s playing style, how he fits into Hearts’ tactics and the attributes that have made him a standout at Tynecastle. 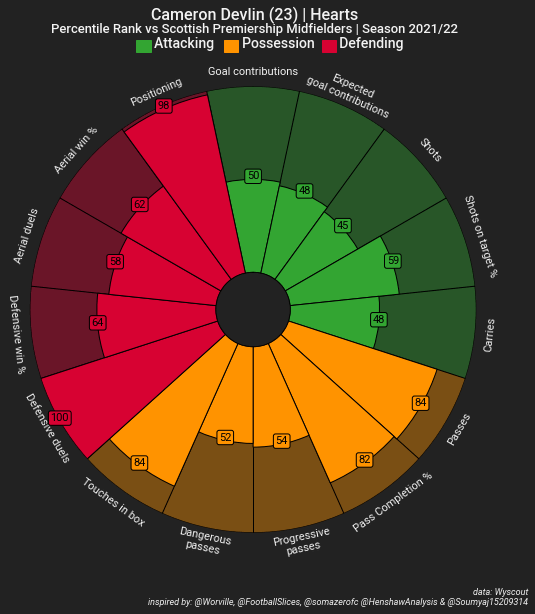 At 170cm | 5’7”, Devlin is certainly not the tallest central midfielder. However, despite his stature, he is aggressive and physical, willing to engage in defensive duels all over the park to regain possession for his team.

Looking at his data in the pizza chart, which shows his percentile rank compared to other central midfielders in the Scottish Premiership, we can see just how willing Devlin is to engage the opposition with the player being in the top percentile rank for defensive duels, and an above-average success rate in them.

The other defensive score that stands out in the data is his positioning (a combination of shots blocked and PAdj Interceptions), which he also ranks very highly for. He is not as involved in aerial duels compared to other defensive actions, but he still scores above average for his success rate too.

Although we can see his defensive strengths, Devlin still makes a decent attacking contribution too with around average percentile ranks for goals contributions and expected goals contributions. He takes a slightly below-average number of shots for a central midfielder in the Scottish Premiership last season but does rank above average for his on-target percentage. For carries (a combination of dribbles and progressive runs) he also scores around the average mark.

In the possession section, we can see that Devlin takes a high number of passes per 90. We can also see he is secure in possession with a high rank for his pass completion percentage. His rank for both progressive and dangerous passes (a combination of key passes and through passes) is not as high, around average, but we see his box-to-box profile come through with a high percentile rank for touches in the box. 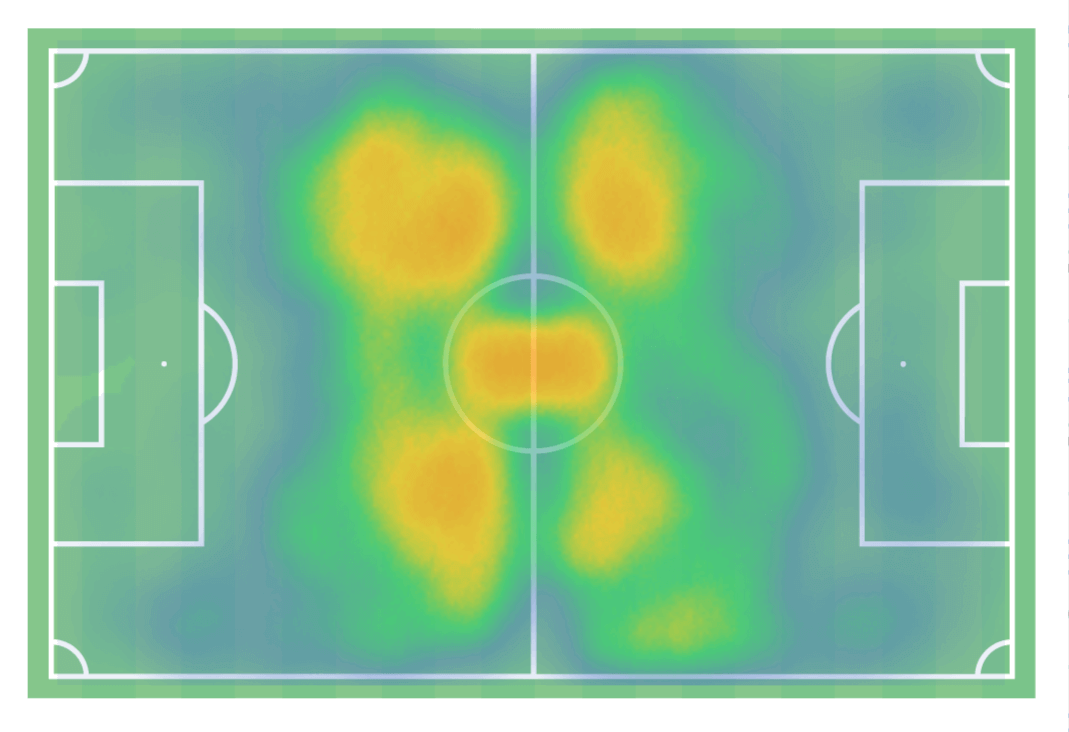 We can see just how much of the pitch Devlin covers when we look at his heatmap for this season too. He is most active in the centre but has concentrated touches on both sides of the halfway line, left and right. We can also see he is active right from the edge of his box into the opposition third.

As seen in his pizza chart, Devlin has one of the highest percentile ranks for positioning. He has excellent defensive awareness, reads the game well and can cut off passing lanes effectively. Constantly scanning for danger around him, he reads opposition players’ intentions very well.

These attributes have been key for Hearts this season, particularly in their 3-4-3 shape, with Devlin able to cover spaces when their wing-backs bomb on.

This graphic, taken from Wyscout, highlights just how effective Devlin is at recovering the ball. Completing an average of 10.24 recoveries and 6.98 counterpressing recoveries per 90 minutes, Devlin can recover the ball from almost any area of the park. 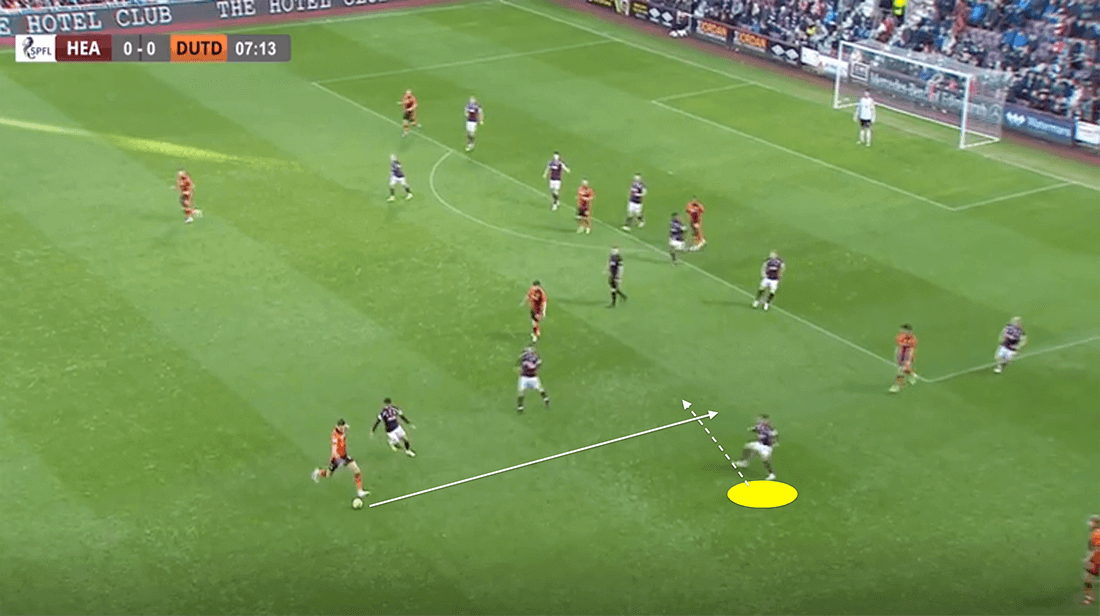 Here we see an example of Devlin’s excellent defensive awareness in a league game against Dundee United. In this situation, Devlin initially checks his left and makes a motion to cover the passing lane out wide but then reads the disguised pass from the Dundee United player – an attempted vertical pass to break the Hearts line. Having read the pass, Devlin quickly positions and shapes his body to the right, allowing him to intercept and break up the attack. 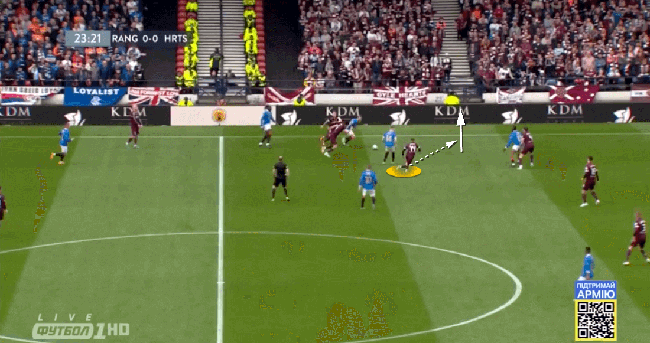 This next example, from the Scottish Cup final against Rangers, shows Devlin demonstrating his defensive awareness again. The Rangers player has managed to evade the challenge of two Hearts players in the wide area and starts to carry the ball into space behind. We can see from Devlin’s body shape that he has read the danger, he then shows good pace to quickly make up the ground and engage the ball carrier. On this occasion he slides in to cleanly knock the ball out of the park, allowing Hearts to get back into their defensive shape. 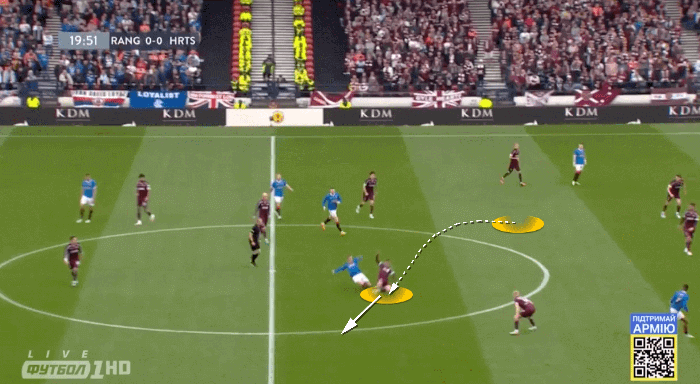 As we have seen so far, Devlin is more than willing to get stuck and do the unglamorous side of the game for his team. In another example from the Scottish Cup Final against Rangers, we can see Devlin making up ground from a deep position to challenge for a loose ball. Again, he has anticipated the loose ball well and gets there to slide in and win the challenge.

Devlin’s excellent tackling, and high levels of energy, also make him an effective presser. He shows good speed to quickly engage opponents, coupled with his high stamina, which allows him to press at a consistently good level throughout the game. 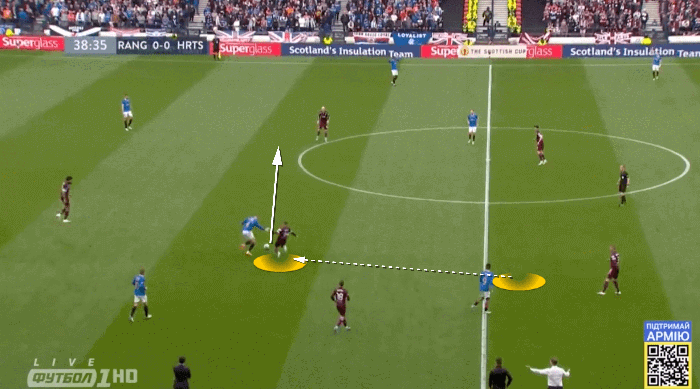 Again, taken from the Scottish Cup Final, we can see an example of Devlin’s pressing. Starting from his deep-lying midfield position, he sprints forward to aggressively press Rangers’ John Lundstrum. He shows excellent timing to nip in and get a foot on the ball as Lundstrum takes his next touch. The way he shapes his body to make the challenge means the ball runs loose into a dangerous area in the middle of the park where his teammate Liam Boyce can pick up and start an attack.

One area of his defensive game Devlin could work on is tempering his aggression slightly. Picking up 10 yellow cards in 23 league games, he has been over-eager on occasions. His tenacity is certainly a strength, but to improve his discipline he could be a bit more controlled at times.

Devlin is secure in his passing with an 85.7% completion rate for his average of 48.79 passes per 90 and while, as we have seen in his data profile, he is around average for progressive and dangerous passes, he still makes 4.67 passes to the final third and 1.43 passes to the penalty area per 90. 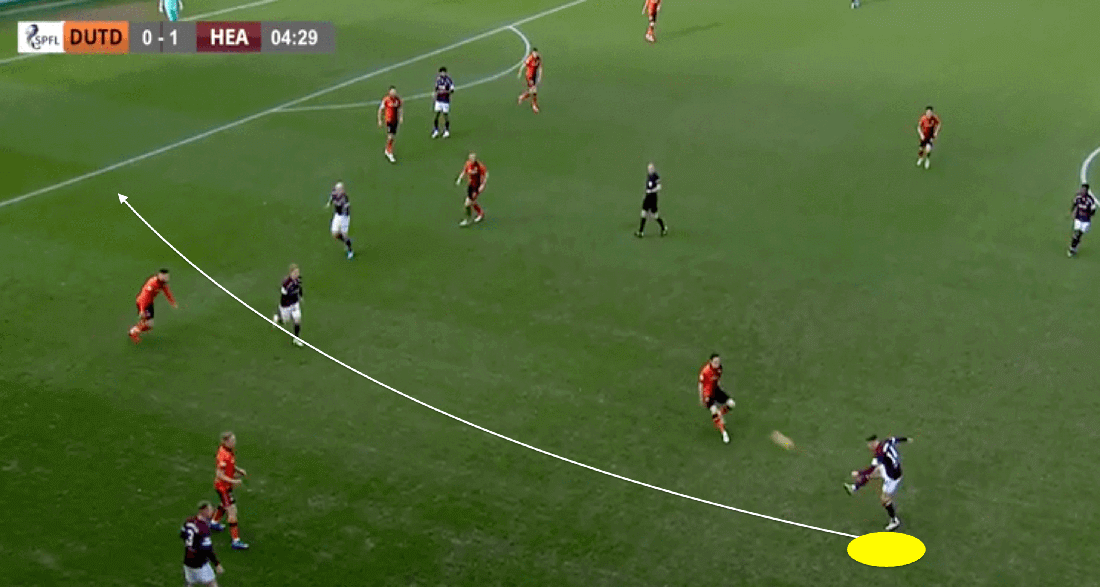 Here we see an example of Devlin passing into the final third, in an away game at Dundee United. Positioned quite deep, Devlin spots the movement of Liam Boyce in behind the Dundee United defence, showing excellent technical quality to play the ball down the channel with a lofted pass using the outside of his foot. 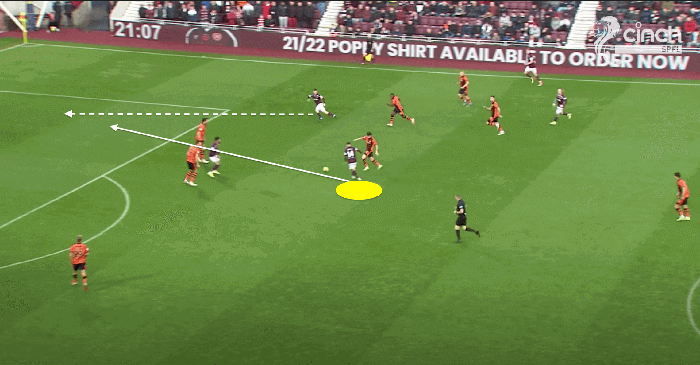 In this next example, we see Devlin positioned closer to goal in an advanced midfield role. Here he spots the run of the Liverpool loanee, Ben Woodburn, in the right channel and despite a first touch that pops the ball up, he plays off his second as the ball comes back down, weighting the pass in behind so Woodburn doesn’t have to break stride and can get a shot away the first time. 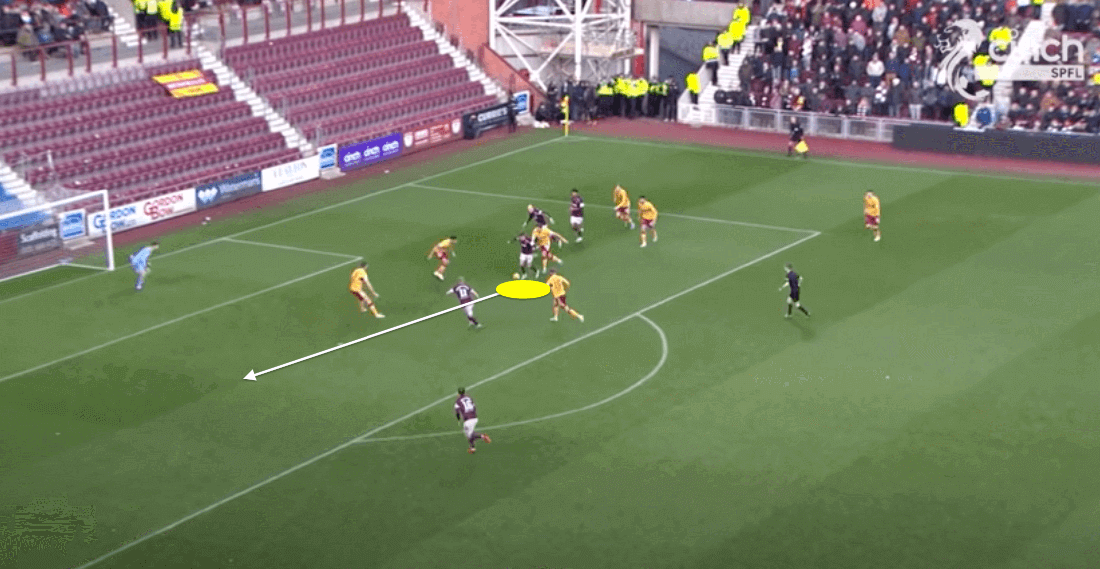 As we see in his data profile, despite excelling on the defensive side of the game, Devlin also has an impact in the final third too. He can make well-timed runs from a deep midfield position, arriving in the box to contribute to goal scoring opportunities.

In this example, in a home game against Motherwell, we see one of his two assists in the league this season. After making an initial darting run into the box, the ball breaks to him. He then takes a touch to compose himself and rather than taking a shot on his weaker left foot, he spots Andy Halliday free at the back post and rolls the ball into his path to finish first time.

His one league goal for Hearts last season, away to St. Mirren, is another example of his attacking contribution, as well as a perfect encapsulation of his box-to-box profile. 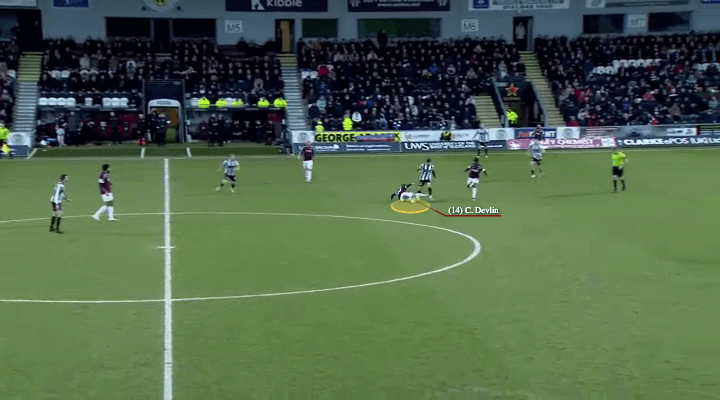 In this first still, we see Devlin executing a trademark sliding challenge in the middle of the park. Coming round from the side, he slides in to bring the ball away, jumping up quickly to play a forward pass to Liam Boyce. 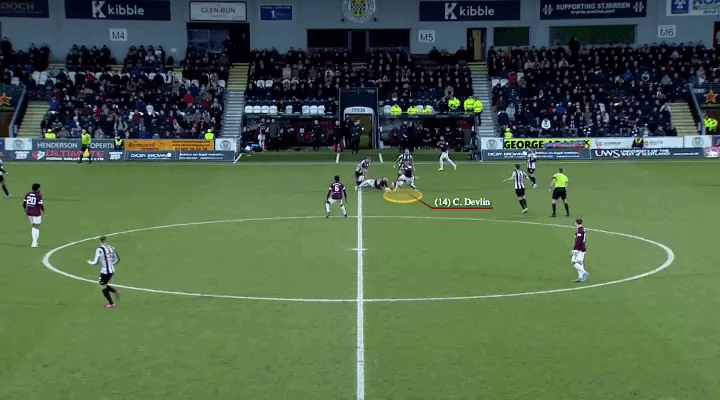 As the play develops, the ball goes loose as St Mirren attempt to win the ball back. Here we see another example of Devlin’s excellent anticipation, nipping in to touch the ball forward for his midfield partner Beni Baningime to carry into space. 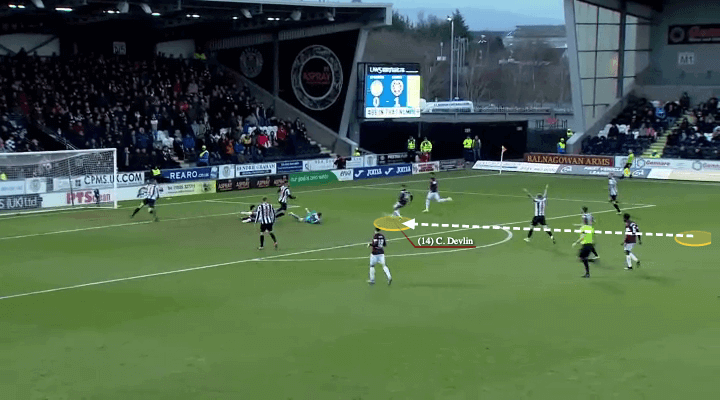 Baningime then plays a through ball in behind the St Mirren defence, setting up a chance for Ellis Simms to finish. The St Mirren goalkeeper makes a good save but as the ball comes back out Devlin arrives. Having timed his run from the edge of the box well, he has enough time and space to calmly stroke the ball into the net.

With the success of Devlin, and his countryman Nathaniel Atkinson, this season, it’s no surprise to see Hearts recently linked with a move for another A-League star in Central Coast Mariners’ Kye Rowles.

It will be interesting to see whether other clubs in Scotland follow Hearts, and Celtic with their huge success recruiting from the J League, in tapping into these markets more.

For Devlin, with Hearts guaranteed group stage football in Europe, he will have the opportunity to showcase his talents on a bigger stage next season.

If he can build on the form he has shown in his debut season then he may well find himself on the radar of bigger clubs around Europe.