In the days leading up to the UEFA Champions League final, rumours surrounding the future of Liverpool’s Sadio Mane began to grow. The Senegalese forward has just one year on his contract, and it is believed the forward will depart Liverpool this summer in search of a new challenge, with him being heavily linked to Bayern Munich.

Since he arrived on Merseyside, he has played an integral part in their on-field success, especially in the Premier League where he never scored less than 10 league goals. This summer is the first where Liverpool’s transfer activities will be led by Julian Ward, as Michael Edwards departs the club. Ward and Jurgen Klopp will be faced with the unenviable task of replacing Mane if he does go ahead and depart this summer, however, if there is one club that will thrive on the task it is Liverpool.

This data analysis will analyse data and look to find some suitable replacements for Mane that fit their recruitment beliefs and playing tactics.

Mane and the current Liverpool attackers

In order to get a better understanding of what Liverpool will want from a replacement for Sadio Mane, we will take a look at how the current Liverpool attackers perform, in terms of statistics. This can help us understand the attributes Liverpool requires from their attackers, without having access to the KPIs or specific requirements of Liverpool, which should help us accurately identify some potential replacements. The below percentile ranks show Liverpool attackers in a sample of attackers with over 1500 minutes in Europe’s top five leagues and the Eredivisie + Primeira Liga.

The first shows the departing Sadio Mane and his performance in a combination of in possession and out of possession metrics. 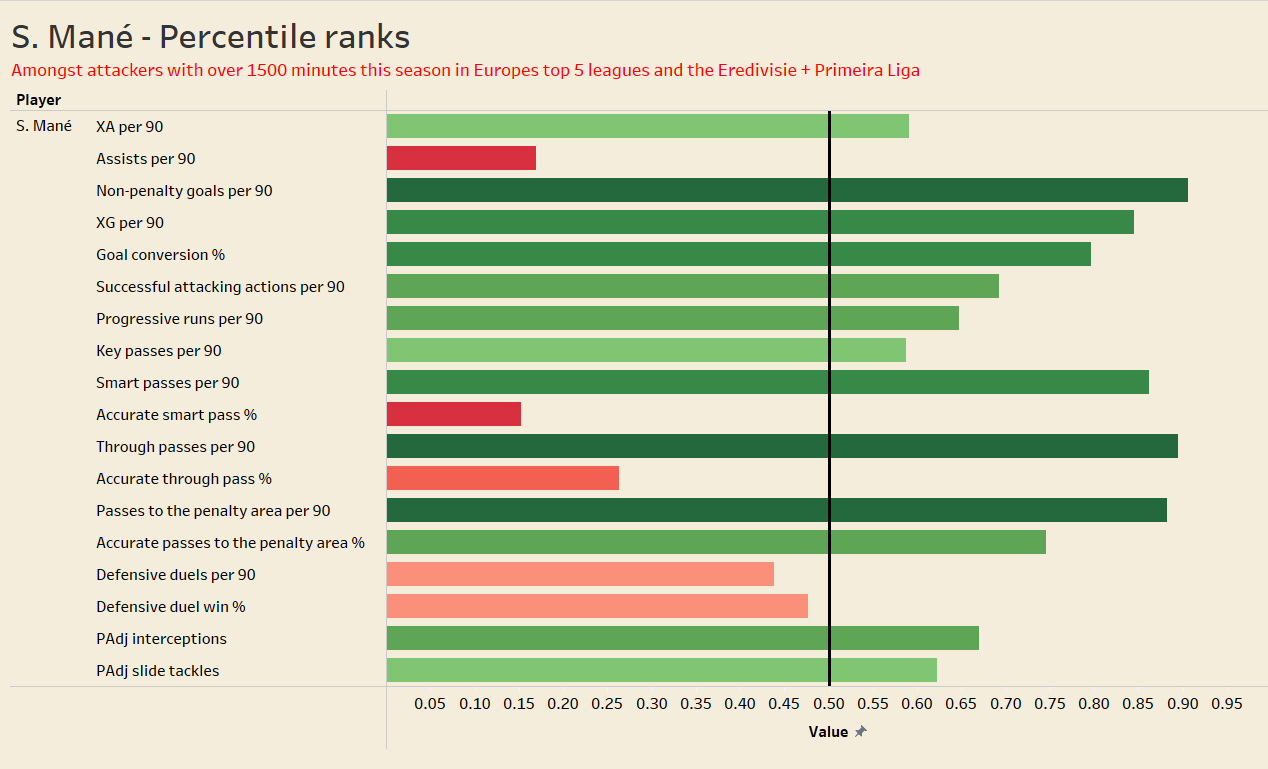 As you can see, Mane excels in both chance creation and goalscoring. He has a strong xA per 90 of 0.12 per 90 in addition to achieving a high number of key passes, smart passes and through passes, all of which create or help create chances for Liverpool. Mane is also one of the best goalscorers in the sample, ranking in the 90th percentile for non-penalty goals per 90, something that will need replacing.

The next shows another Liverpool attacker in Mohammed Salah, who looks likely to extend his contract at the club. 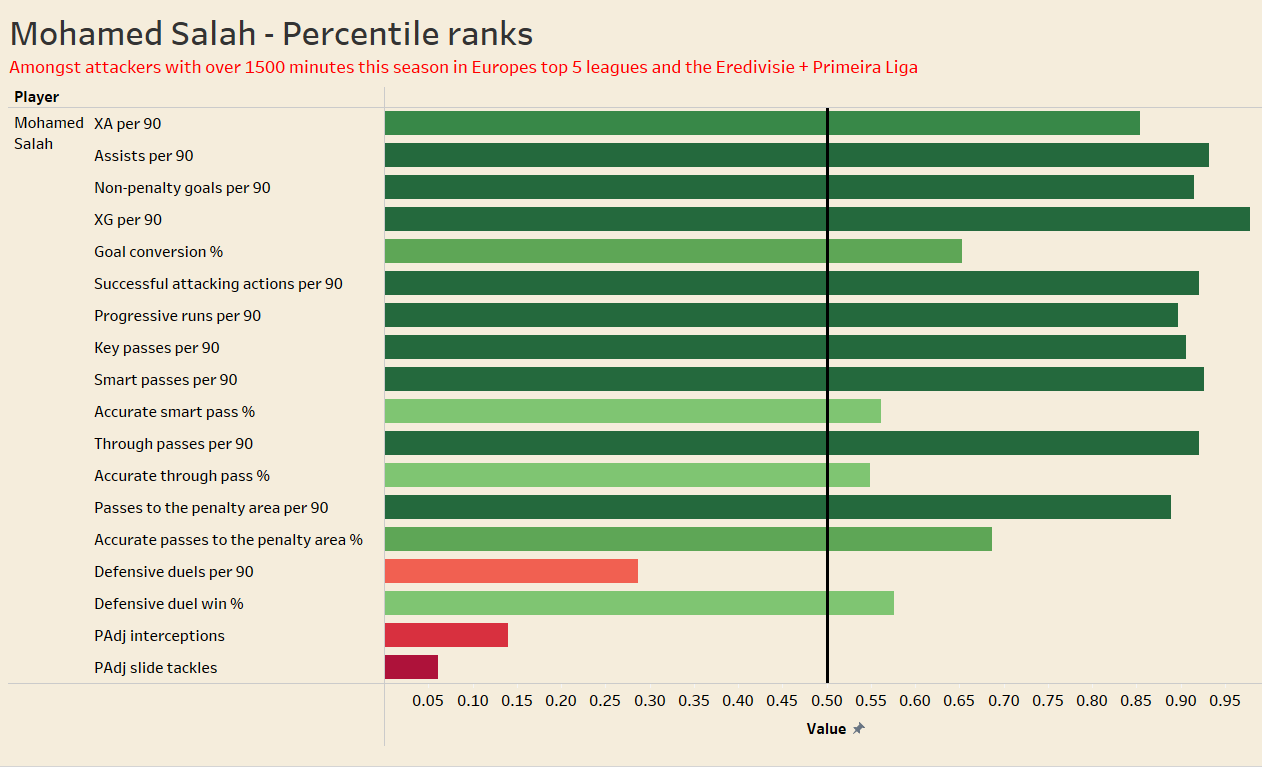 Salah performs excellently in pretty much every attacking metric, showing his importance to Liverpool’s attacking play. He also outperforms Mane in most of these metrics and maybe indicates why Liverpool seems to be more aggressive in pursuing his contract extension.

Finally, we will show the data performance of Diogo Jota in the same metrics as Mane and Salah. 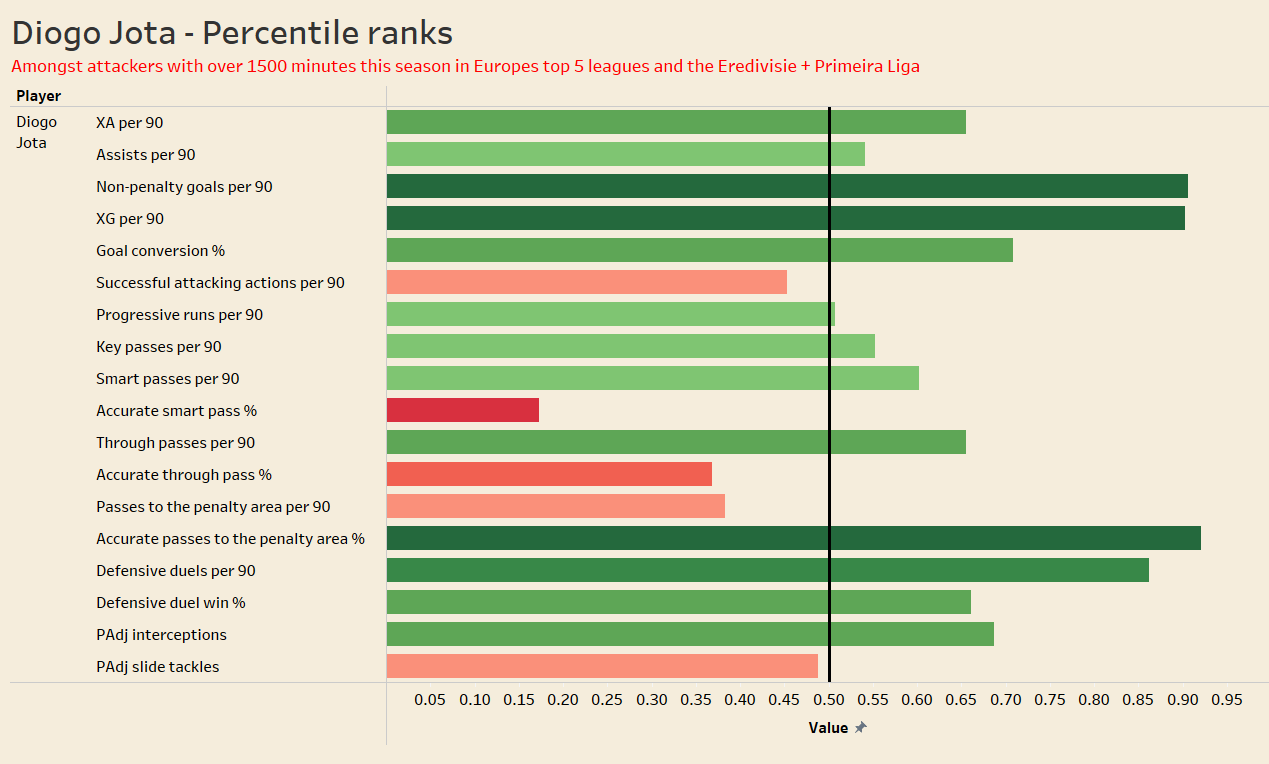 His overall performance is not at the same level as Salah’s and is closer to the level of Mane. It is worth noting that Jota, is the best in terms of defensive metrics of the three, with above-average numbers in defensive duels per 90, defensive duel wins % and PAdj interceptions.

From looking at these percentile ranks, it indicates that we are looking for someone who is one of the sample’s top performers in goal scoring and chance creation. They must also be able to contribute to the overall attacking play and not abandon their defensive responsibilities. The player must also fit into Liverpool’s attacking style and requirements. Klopp likes his attackers to be versatile with the current Liverpool front three looking like Diaz, Mane and Salah but all three can move across the front line.

In regard to the striker in this system whether it be Firmino, Mane or Jota, Klopp wants them to drop off the defensive line and into pockets of space helping to link up play and create space in behind for runners.

The below analysis will analyse some of the top performers in a set of data metrics which will help us identify some replacements for Sadio Mane. The players will also be realistic transfer targets for Liverpool who fit their tactics but also transfer strategy. Firstly, we have non-penalty goals per 90 and xG per 90 (we didn’t have access to non-penalty xG), this is one of the best indicators of a player’s finishing ability, with the sample measuring performance over a whole season, it gives an accurate reflection of a player’s goal-scoring ability.

Darwin Nunez is one of the first names that standouts out in these metrics with 0.77 non-penalty goals per 90 and an xG of 0.57. Nunez is one of the best goal scorers in the sample and is drawing attention from Europe’s best, one of which is Liverpool. We think he would make a great tactical fit playing through the middle of the front three. 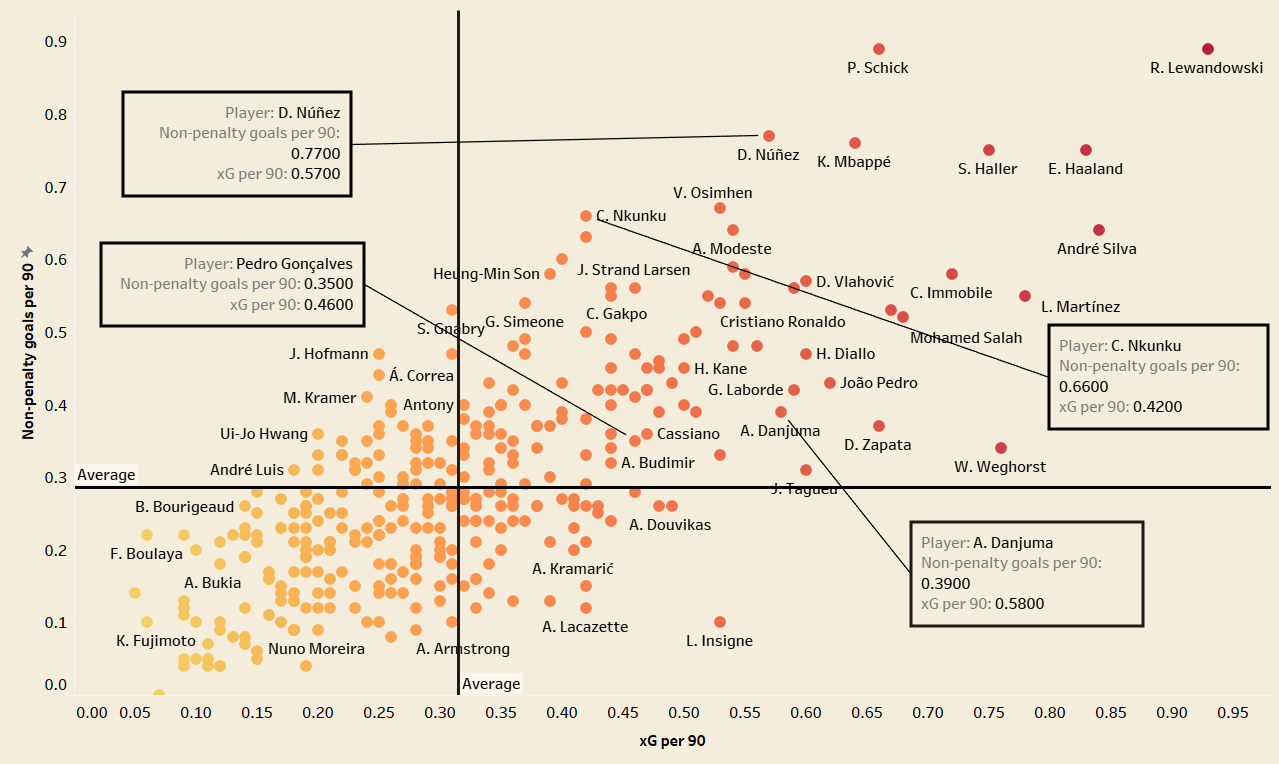 Another standout performer is Christopher Nkunku of RB Leipzig, with 0.66 non-penalty goals and an xG of 0.42. Now, Nkunku is outperforming his xG but even if he does experience regression next season his xG is still impressive. He is also another brilliant tactical fit and would provide positional versatility.

Pedro Goncalves of Sporting Lisbon has had an impressive season and his non-penalty goals per 90 of 0.35 is impressive, so he could be one to watch. Finally, former Bournemouth man Arnaut Danjuma has been in fine form for Villareal, especially in front go goal with a non-penalty goal per 90 of 0.39, although there is still some room for development.

The next data metrics we will look at are xA per 90 and assists per 90. The standout performer here is Barcelona’s Ousmane Dembele. The Frenchman’s contract is up this summer and Dembele is one of the most exciting attackers in Europe. However, he doesn’t play a lot of football due to injury issues which makes it hard to see him at Liverpool this summer. 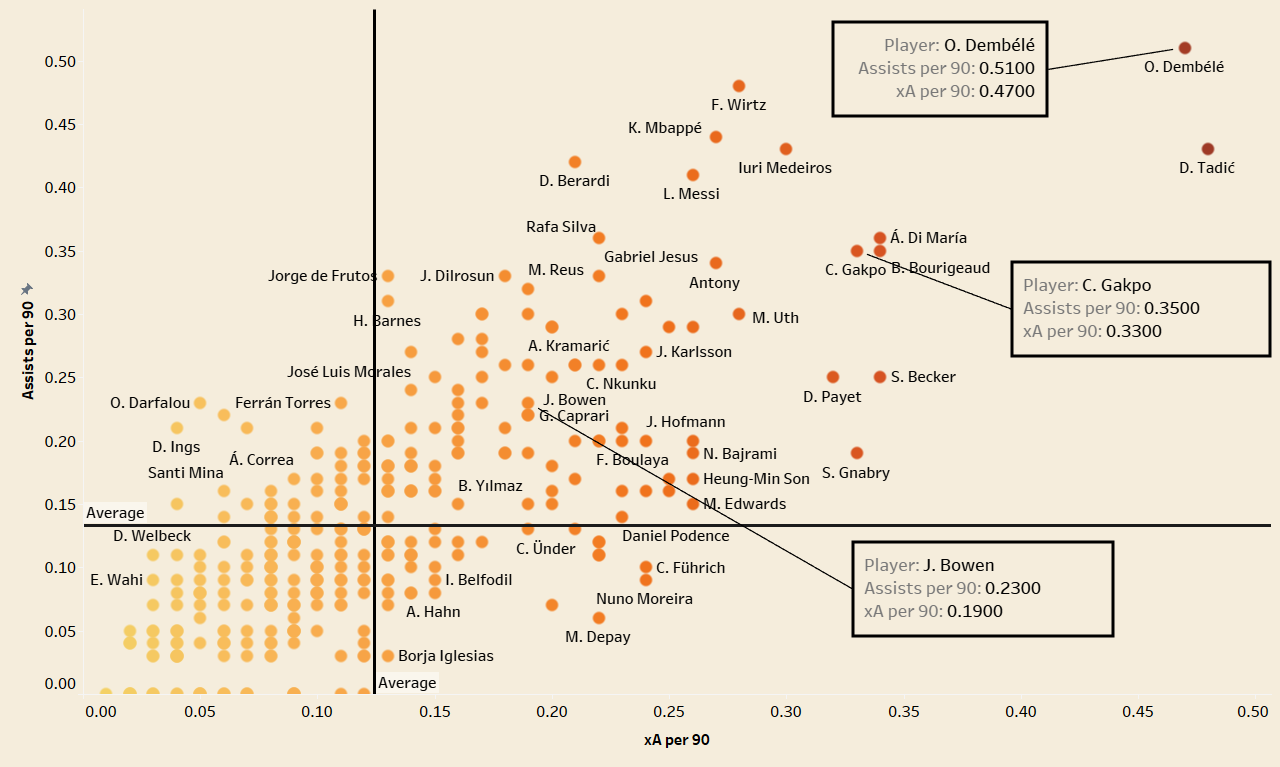 Cody Gakpo of PSV is another excellent performer, with one of the highest expected assists in the sample at 0.35.  The PSV attacker has had another superb year in terms of chance creation and goal-scoring. However, playing as a left inside forward predominantly may mean Liverpool look elsewhere as they have cover in that area.

The final name is West Ham Jarrod Bowen who has been one of the best premier League attackers this season, although he may not be one of the sexiest names mentioned, he would certainly bring quality and Premier League experience. 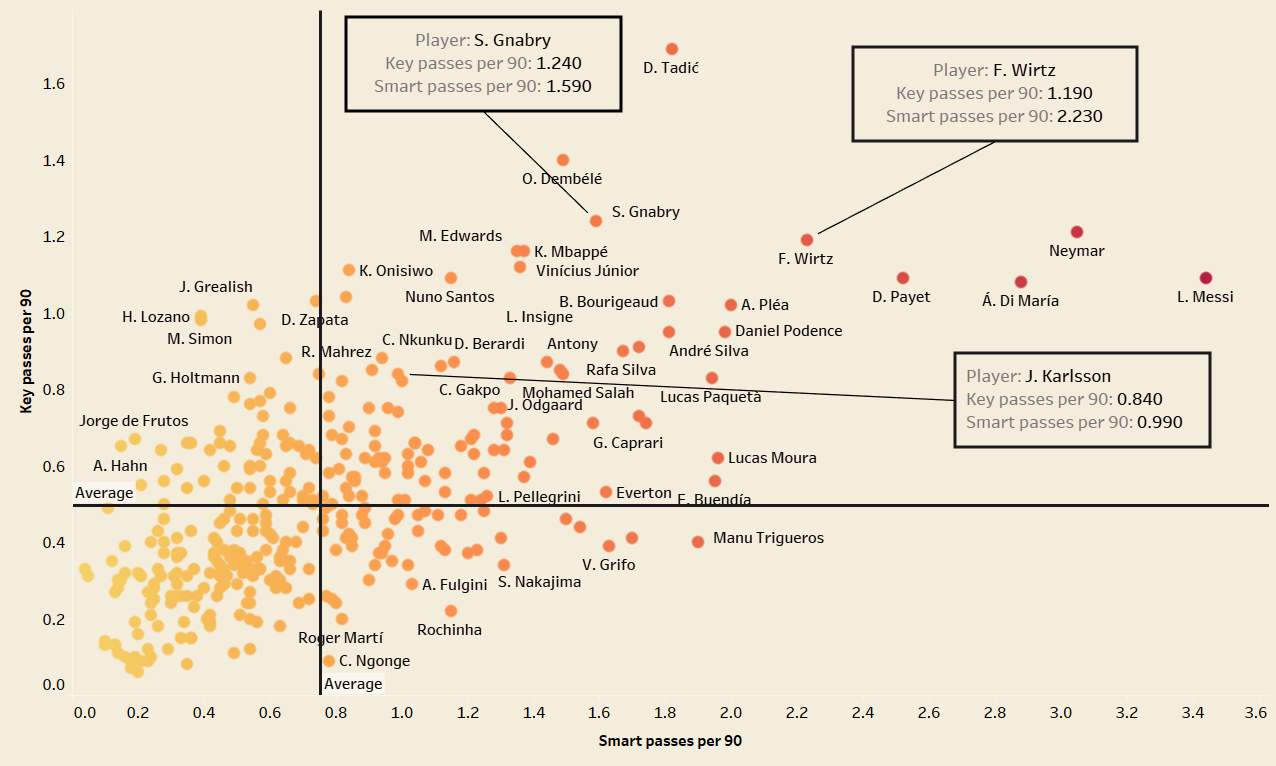 One of the sample best performers is Florian Wirtz of Bayer Leverkusen, one of Europe’s hottest prospects. Wirtz operates as a number 10, but his skill set and ability could see him operate as an inside forward or false nine, in a similar way to Kai Havertz of Chelsea.

Another player who has an impressive key and smart passing numbers is Serge Gnabry, who is rumoured to be the replacement for Mane.

Finally, we have Jesper Karlsson whose chance creation is excellent but faces a similar issue to Gakpo and that he operates as a left inside forward where Liverpool have depth.

The below selections are the three players we believe would make the best replacement for Sadio Mane and fit the tactical requirements and style of Liverpool.

IF you take a look at his percentile ranks below, this selection should make sense with him performing well in every metric shown. He would make a perfect fit for Liverpool with the ability to play off the left or right and this could also allow Liverpool to use Salah through the middle more often.

When Gnabry plays wide on the right side, he likes to play wide to the touchline which will suit Liverpool with Trent Alexander-Arnold underlapping on the right side. With Mane likely going to Bayern Munich, the talk of a swap deal makes perfect sense for Liverpool, with Gnabry also having a year left on his contract. 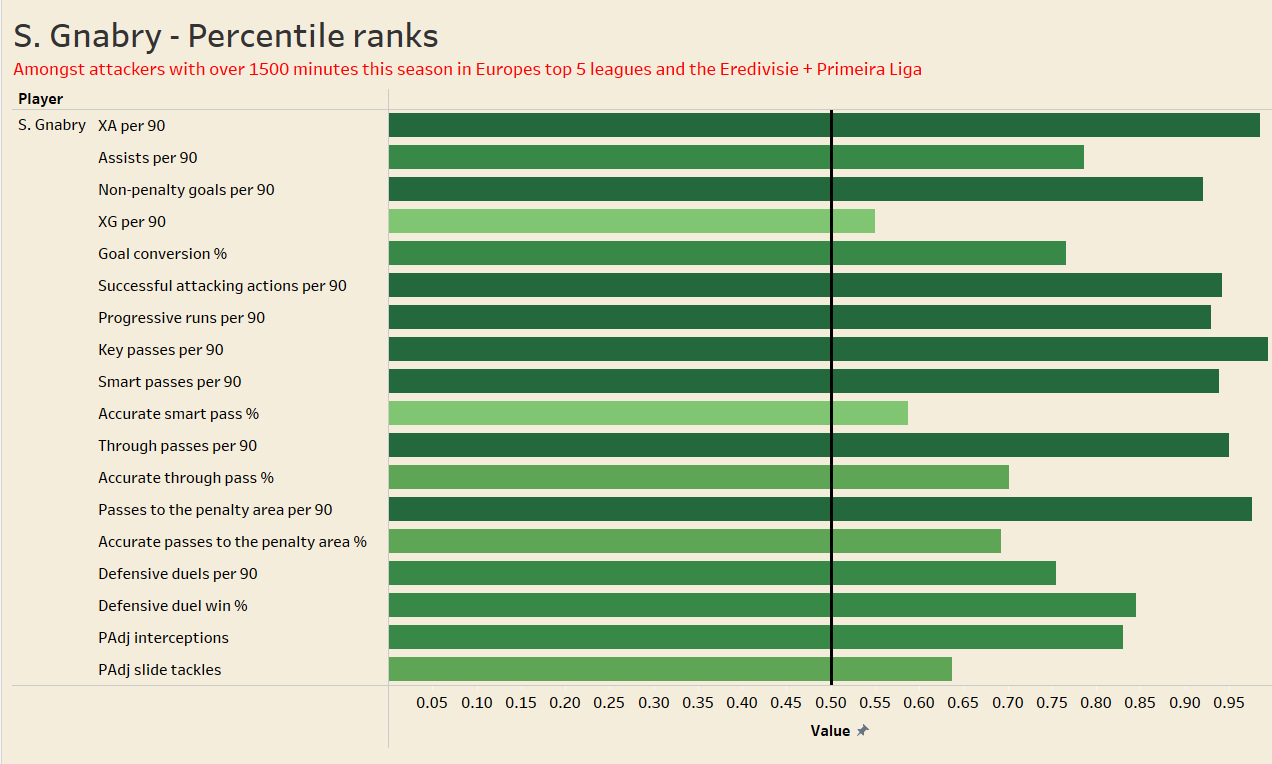 Another excellent option for Liverpool would be Christopher Nkunku of RB Leipzig. Nkunku has excellent positional versatility with the ability to play every position across the front line, which will be of great benefit to Jurgen Klopp’s Liverpool. As you can see in the percentile ranks below, Nkunku has been brilliant in chance creation and goal scoring this season. The rest of his all-around game is strong and he doesn’t abandon his defensive responsibilities. Having played for RB Leipzig, he should also be accustomed to the similar tactical styles the clubs have. 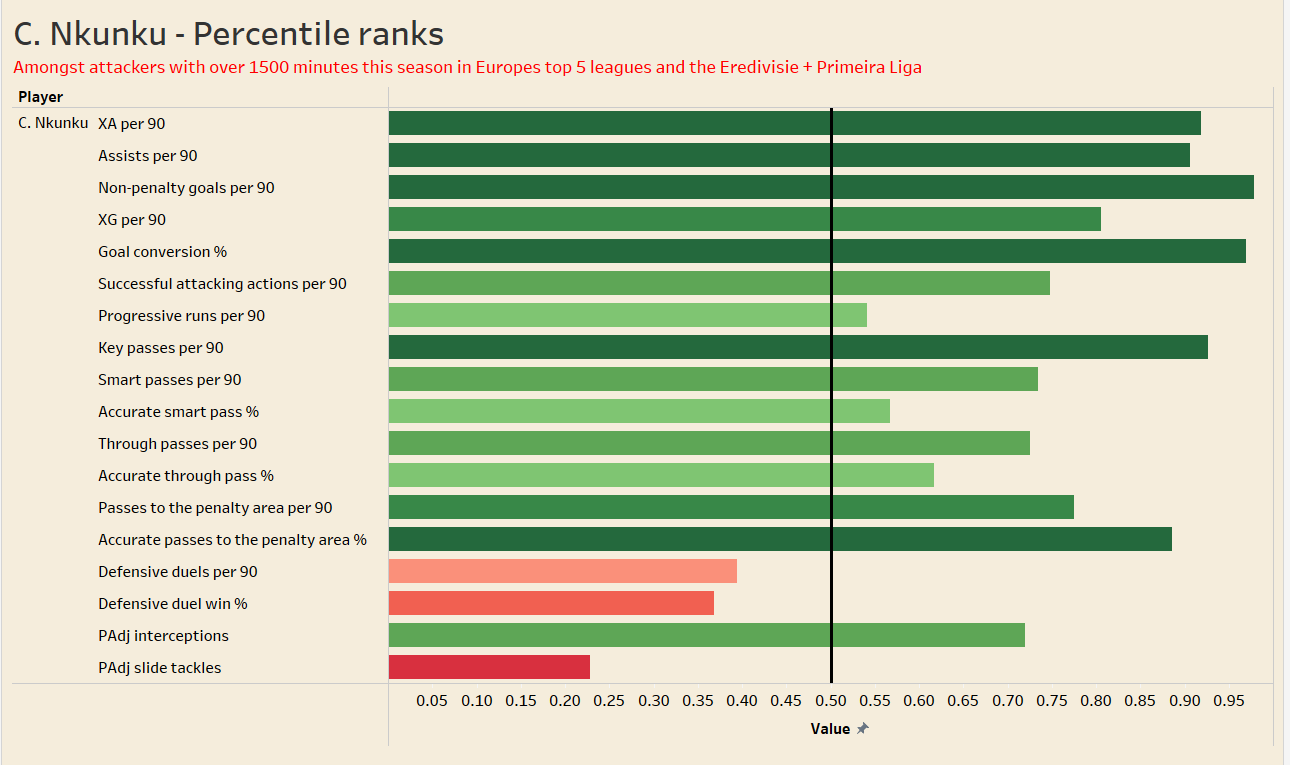 This selection depends on what Liverpool wants in a replacement for Sadio Mane. If they are looking for an out and out striker, a role Mane has played since Luis Diaz’s arrival, then Nunez is the man. He is probably the most sought-after striker in Europe right now and for good reason. He is a natural goalscorer who, although there are areas of his game he needs to tidy up, looks like he will become one of the world’s best strikers.

Tactically he should fit into this Liverpool team with the ability to drop between the lines but also run in behind. Nunez can pretty much do it all. The only issue could be that he is likely to demand a high transfer fee which hasn’t been FSG’s style during their tenure at the club. 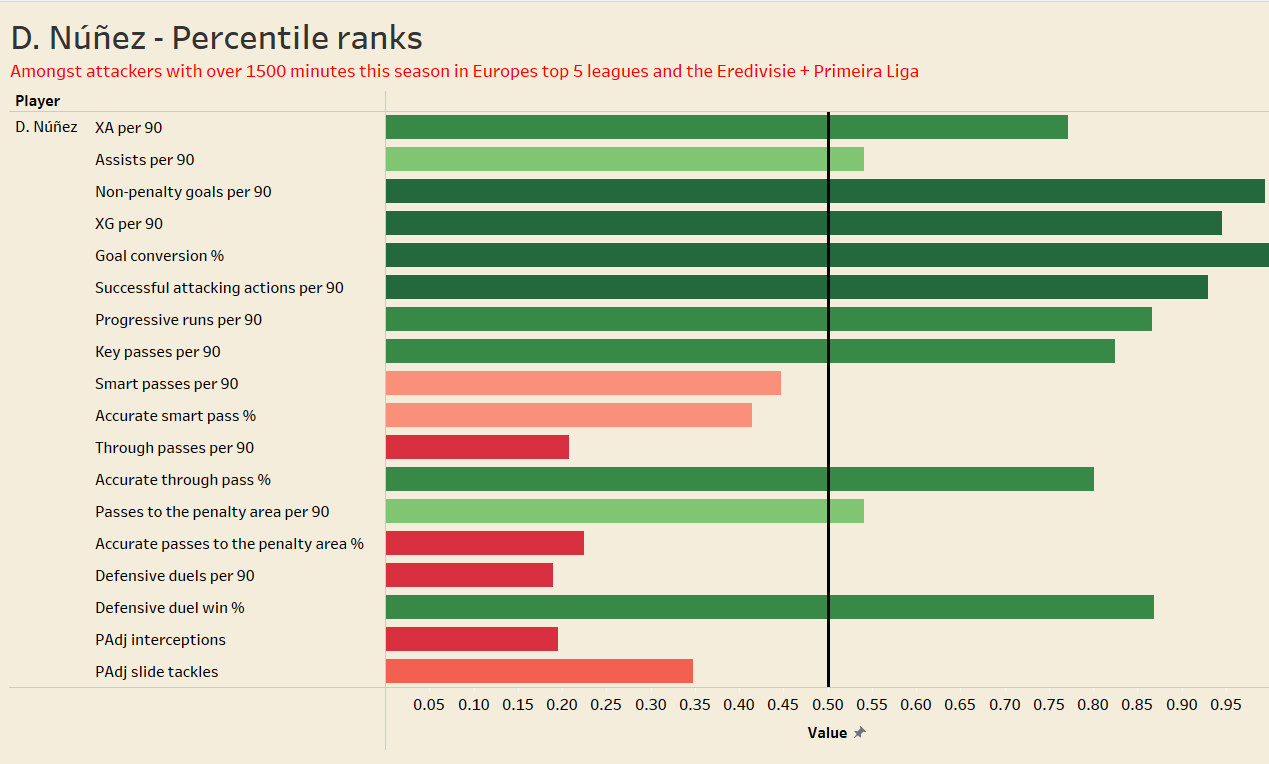 The three selections shown above would make excellent acquisitions for Liverpool and would help smooth the loss of Sadio Mane. With Mane ageing and his contract expiring in a year’s time then moving on from him now is quite a smart move and if they could add one of the names above then Liverpool should continue to be in a strong position to challenge on all four front again. A special mention to Jarrod Bowen who, if Liverpool couldn’t get the above names, would still make a brilliant addition to the squad.