While developing this series of passing and moving patterns, I share what has worked for me on the training ground as well as taking influence from some of Europes finest teams who operate in this formation. Among some of the most effective in attack, this season is Gian Piero Gasperini’s Atalanta. They are a hot topic for tactical analysis writers this season, and it is no wonder why. The Serie A side have owned the 3-4-1-2 formation while boasting the highest xG in Europe and looking a dark horse in latter stages of this years UEFA Champions League.

Why coach patterns of play

Bottom line, we train patterns of play to help players identify and execute pre-determined passing and moving combinations to beat the opponent’s defence. Sometimes that may mean penetration to score a goal, other times it may also mean playing through the opponents forwards or midfield to get through their defensive block or pressure.

If you are a coach, also consider individual and team confidence. When the attacking team is only playing in reaction to one another, this means they are trying to discover moments and gaps out of pure randomness to get success. At the same time, the opponent can anticipate and defend. The likely outcome is a lot of technical and tactical errors that subsequently result in higher turnovers, which weighs a players confidence. On the other hand, when you have a team that knows the system and they can execute plays on minimal touches, and at such a high speed the opponent cannot always react to this, which in turn, offers a higher chance of success.

Just hearing a team plays a 3-4-3 or a 3-5-2 formation does not tell us the full story of how each player or unit operates in that system in and out of possession. The 3-4-3 is married closely with the 3-4-1-2, 3-4-2-1 and the 3-5-2. Depending on the staggered positioning of players at times, it is easy to misinterpret a teams formation for another. Generally, a team that plays in a 3-4-3 will usually drop one or two players from its frontline into midfield during the build-up phase. 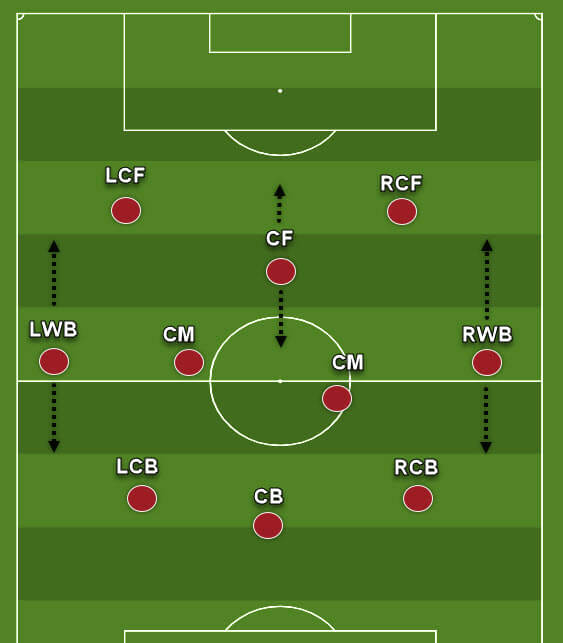 Above, the tactical annotation represents each player’s position in the 3-4-3.
Note how the ‘CF’ can easily be perceived as an attacking midfielder for average in-between distance from the midfield and the forwards. In the patterns of play below players starting positions honour that of the tactical setup above. Again, if your team plays a slightly different formation, the same success can still be achieved with minor adjustments if necessary.

All patterns can be mirrored on both sides of the field. The ‘blue’ icons on the field represent mannequins, work at your own pace as you may want to gradually introduce one, two or three defenders along with the mannequins over time. 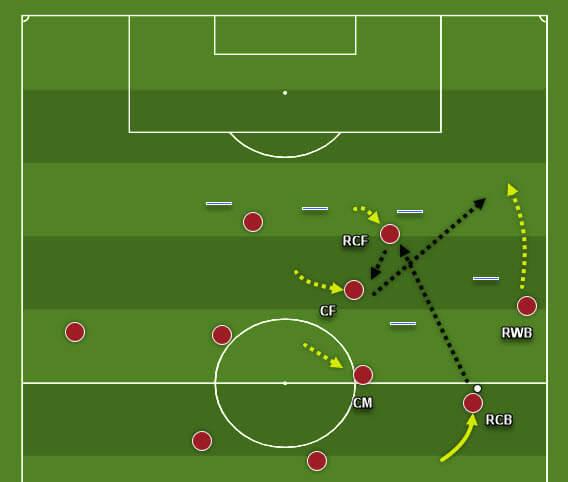 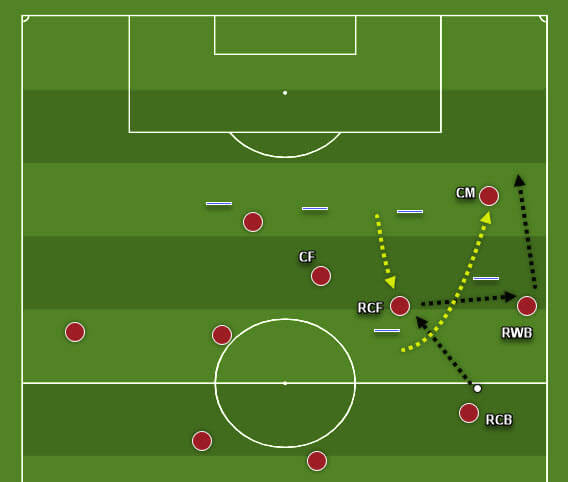 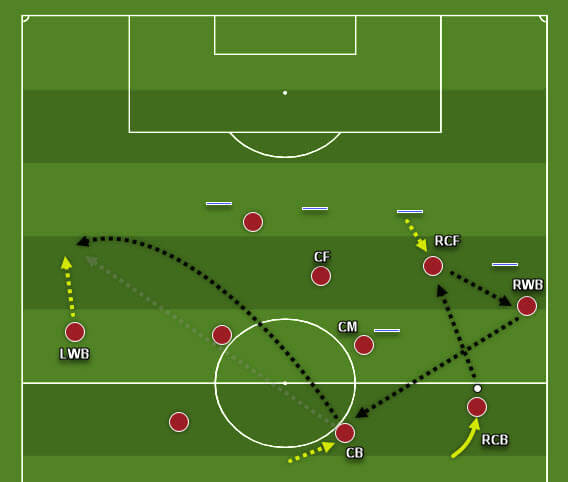 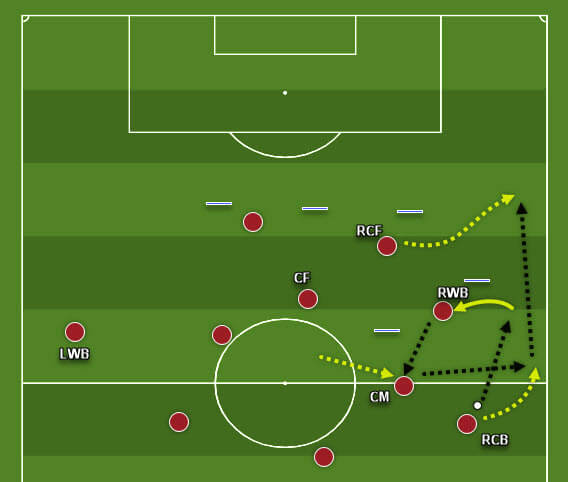 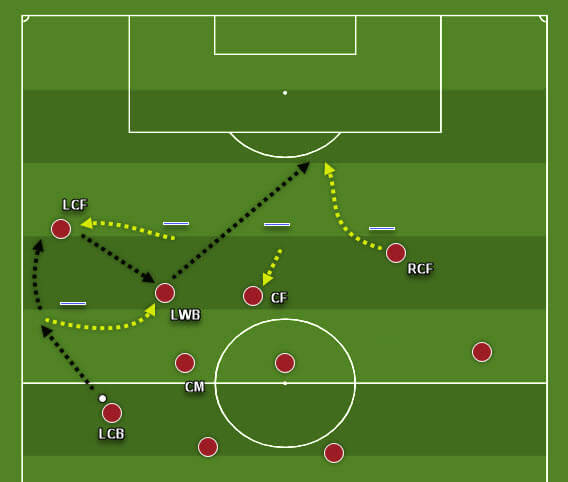 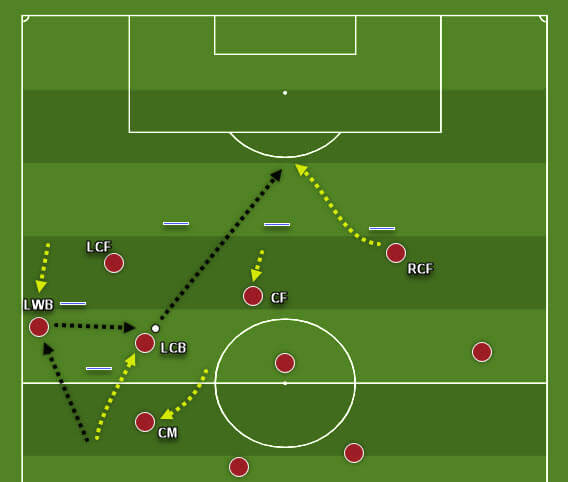 Options central and wide: We have outlined a total of six options for a team who plays either a 3-4-3 or a variation of that formation to seek out, create and execute. Passing qualities, as well as the right timing and movement, will always be crucial essentials to get success. In the beginning, when working with your players, narrow it down to one or max two patterns in a week. Let them get used to this, learn the pattern well and build confidence.

What-If’s: *This is usually where a coach has to show his value as a mentor, as there will be plenty opportunity for stoppages in the conditioned game, helping the players discover their what-ifs will be crucial for developing a confident possession-based team. Remember it is essential for players to identify not only their patterns of play but also know their what-ifs if the desired outcome cannot be reached.

If you enjoyed and found this article valuable, or you still have some questions or want to discover more on patterns of play in the 3-4-3 formation, write to me on Twitter @easytactics. I will follow up with another coaching piece soon on ‘Attacking with inverted wingers’ only here on totalfootballanalysis.com. 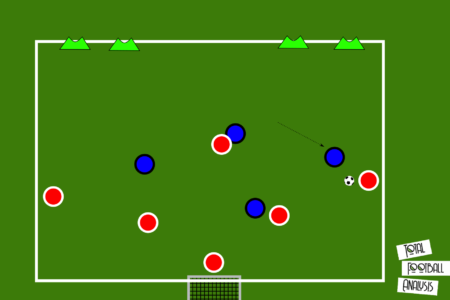 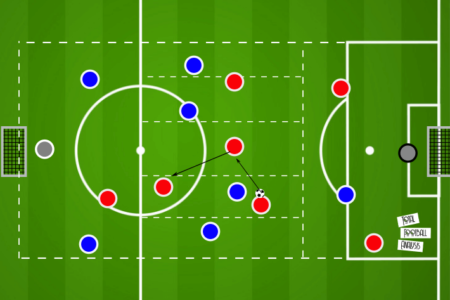 This article represents the second in a six-part series on coaching team defending. This is looking at group tactics, rather […] 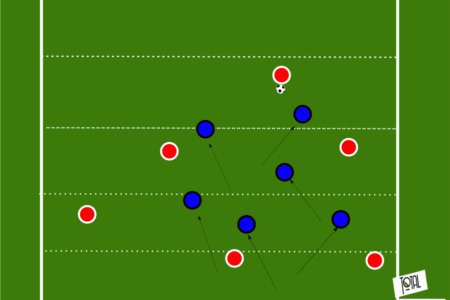 This article represents the third installment in a six-part series on coaching team defending. This is looking at group tactics, […]