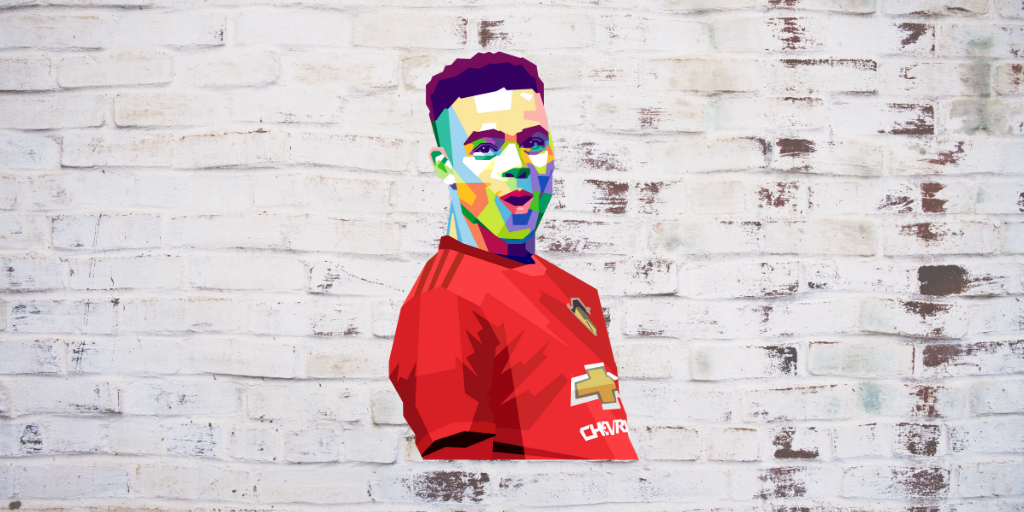 There is almost no better love story in football than Manchester United and their academy graduates. From the likes of Sir Bobby Charlton to the legendary Ryan Giggs and current star Marcus Rashford have their own story in United’s history book. Not only that, the Premier League giants are now running more than 4.000 consecutive games with academy graduates in the matchday squad; started back in October 1937. Such a historical feat that is hard to be equalled.

This season, a new starlet has born at the Theatre of Dreams. His name is Mason Greenwood. The 18-year-old attacker did play some minutes last season, but late 2019 was his true baptism to the historic United’s legacy. Without further ado, this tactical analysis will inform you how Greenwood has become one of United’s greatest asset this season.

Greenwood is originally a centre-forward. Last season, he managed to score 26 goals and make eight assists in 26 age-group-level matches. Such a promising achievement gave him a promotion to the senior squad in the latter part of last season.

The youngster is also able to play as a right-winger. In fact, his main playing area for the Red Devils now is on the right flank; as Daniel James’ back-up. From 23 matches which Greenwood has participated in this season, he started as a centre-forward only in four games. However, the positional change didn’t reduce Greenwood’s impact. He has made eight goals and three assists in all competition so far; almost one goal contribution every two games on average.

Greenwood is mainly left-footed, as shown by seven out of eight goals that he has made with his stronger foot. However, he also has a good right foot in his arsenal. He proved this by scoring his first-ever senior-level penalty kick in a shootout against Rochdale with his weaker foot; back in September.

Originally a striker, Greenwood tends to tuck inside coming into the final third; sometimes in line with the centre-forward. Greenwood’s tendency gives United’s tactics more dimension as the regular right-winger, James, prefers to stay outside rather than coming in. On top of that, Greenwood’s inside movements sometimes would allow him to pull the opponents’ left-back/left wing-back with him; thus opening a huge space for the right-back in the flank.

Greenwood also tends to come into the box when the ball reached the dangerous area. The Englishman would offer himself as one of the potential receivers inside the box alongside the centre-forward.

As previously mentioned in this analysis, Greenwood uses a lot of his left foot. To utilise that, he often cuts the ball inside to create a shooting space for himself. If he could not make a shot, he would play a cutback pass into the edge of the box or return it to the midfielders. Interestingly, such movement is the scheme behind almost all his left-footed goal this season; making the cut-then-shoot as his main weapon.

The starlet is blessed with a superb spatial awareness which helps him to perform quite brilliantly so far. One of the most interesting feats that contribute to this ability is his habit of scanning his surroundings before receiving the ball. By doing so, he would often know where the opponents and his teammates were; as well as knowing what to do before everyone does.

Furthermore, Greenwood could burst away and free himself from the marking defender by knowing where space is. Even better, he could also create a shooting space for himself just by stopping his run and let the defender bamboozled.

Not only that, but Greenwood also has a lightning-quick pace in his locker. This trait helps him to free himself quickly from his marker, as well as helping him to attack space behind the opponents’ backline. On top of that, such ability allows Greenwood to be a useful weapon in Ole Gunnar Solskjær’s counter-attack-heavy squad.

Despite being a happy-scoring forward in the age-group-level, Greenwood shows that he is not a self-centred player. He often drops from his position to help his teammates progressing the ball. Either dropping next to the midfielders or appearing in between the lines, Greenwood’s movements make United have better link-up options in possession.

Greenwood is also able to locate his teammate in space; credit to his brilliant offensive IQ. Furthermore, the youngster is also blessed with a good vision and relatively better decision-making capability than his age peers; making him a very valuable asset for United.

On top of that, despite being only 18-year-old the teenager has showcased his high level of composure. It’s shown by his calmness to play in tight spaces; escaping opponents’ presses with ease.

Tactically speaking, it is safe to say that Greenwood is a versatile attacker. However, his armoury is not only filled with offensive traits but also defensive ones; making him a great team player.

So far in the Premier League, Greenwood has managed to make 3.2 tackle attempts per 90 minutes, with an average of 1.6 successful tackles. Besides that, the young forward also has averaged 0.5 clearances and 0.5 blocked passes every 90 minutes. Quite a respectful number for a player who regularly subbed in the second half of league matches.

Besides all of that, Greenwood’s defensive work rate is also something to be desired. He is quite active to join the pressing traps with his frontline comrades; as well as doing the dirty work if his full-back has not retreated to the defensive area.

Weaknesses as a winger

In this part of the analysis, we are going to take a look at some of Greenwood’s weaknesses. First, his tendency to only use his left foot. Despite having a wand of a left peg, Greenwood needs to bring his right foot back into the game; as he always did in the junior level. Failing to do so would make him very predictable for the defenders.

Second, his lack of ability in a one-versus-one duel. So far, Greenwood only manages to make 0.4 attempted dribbles per league game; something unwanted from a top-level right-winger. When having the ball free in the flank, Greenwood tends to wait and play a safe pass rather than trying to break his way in. This lack of ability is very much different from the likes of Rashford, Martial, James, and even Wan-Bissaka, who all have superior ball-carrying abilities.

Weaknesses as a centre-forward

Third, Greenwood tends to be static inside the box; unlike United’s previous greats such as Javier Hernández or Robin van Persie. Greenwood rarely offers fake runs, blind-spot runs or even a short burst to flee away and attack the ball. So far, only one of his league goal that happened after an off-the-ball movement inside the box. It was against 37-year-old Phil Jagielka and Sheffield United, late in the game.

Furthermore, despite having a relatively same physique as Rashford (180 cm-70 kg), Greenwood possesses almost no aerial ability whatsoever. Relatively speaking, against full-backs or wing-backs, Greenwood does have the advantage in terms of physique. Yet, he often opts to be passive rather than being a scoring threat at the far post.

On top of that, his positioning also needs an upgrade. Lots of times, Greenwood puts himself in his marker’s eyesight; making him very easy to track. With weaker physical strength compared to the league’s central-defenders, Greenwood has to improve and add some intricacies to his game.

Greenwood’s rate of almost one goal contribution in every two games is something remarkable, especially for an 18-year-old. His high football IQ, amazing pace, and of course the magical left peg was the reason behind his early rise to stardom.

Nevertheless, Greenwood is still a teenager. It’s unfair for us — even for his club — to expect a lot from him so quickly. What he needs to do now is to improve and add a lot to his game. With the amount of potential he has, it will be very interesting to see what Greenwood could be in the future. Let’s wait.