May has seen Swansea’s 21-year-old Welsh winger Daniel James heavily linked with a move to Manchester United. James enjoyed a breakout season at the Liberty under Graham Potter and has earned rave reviews for his performances. This tactical analysis looks at the statistics behind his rise and how his style of play fits in at Manchester United.

Daniel James came through the ranks at Hull City prior to joining Swansea in 2014. He then rose through the U18s and U23s at Swansea to make his first-team debut in February 2018. He made his league debut for Swansea in August 2018, at the start of this season, and has since gone on to become a vital player for the Swans as well as making two appearances for Wales, scoring in the win over Slovakia. In January, James was at Elland Road to complete a move to Leeds United, but the deal fell through at the last minute and James returned to Swansea. Now, four months later, James is set to join Manchester United. His return of five goals and ten assists in all competitions is decent, but hardly what caused United’s interest in a Championship player. As this analysis will show, James has some attributes that can make him a decisive player also at the highest level.

Tactical analysis: What would Daniel James bring to Manchester United?

Now, let us take a look at what James would bring to Manchester United under Ole Gunnar Solskjær. Mainly, the abilities that are sure to have attracted United’s interest is his quality in the final third, his immense pace and direct dribbling threat as well as his ability to press aggressively.

Quality in the final third

Firstly, James has huge potential in his decision-making in the final third. Sure, with only one full season of first-team football, James is inexperienced, but he has plenty of interesting attributes. The image below highlights James making a throughpass to set up a goalscoring opportunity for a Swansea teammate. He first dribbles into the space, then spots the run before providing a perfect pass. 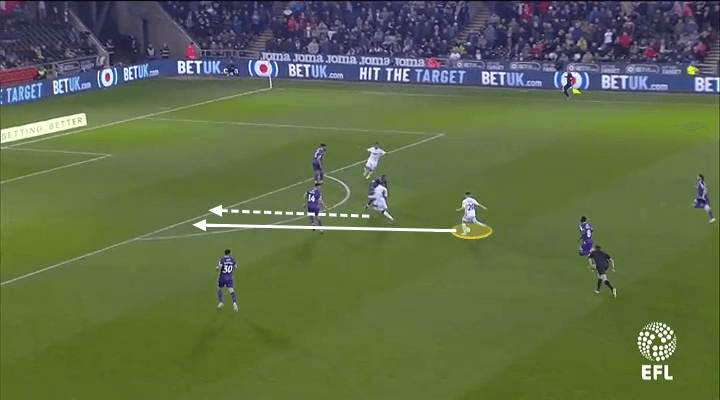 James is very calm around the box, where it is normally quite chaotic and many players panic. James, however, remains calm and looks for the best option. The image below is a telling example. From this position, James could have had a shot or played it slightly backwards to Gareth Bale. Instead, James spots his teammate at far post making a run into the empty space. He plays the pass and sets up a great chance for Wales. 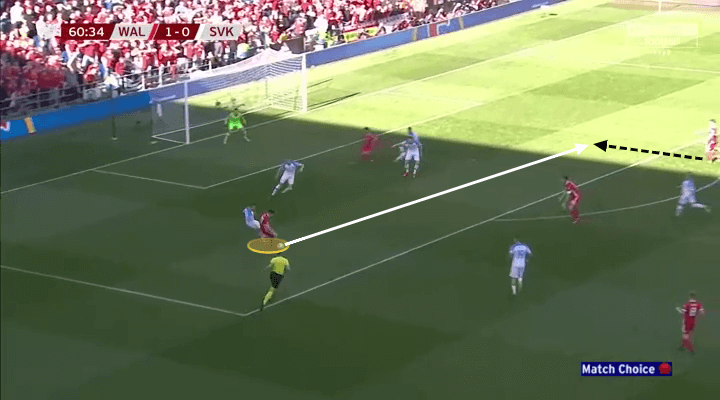 James’ ability with the ball, especially in 1v1 situations, forces defenders to focus their attention on him. Therefore, it is important for James to have the vision to spot the players the defensive team will lose track of when focusing on him. The below image highlights such a situation. There are three defenders all attracted to James, who plays a delicious outside of the boot pass to his teammate making the run in-behind. 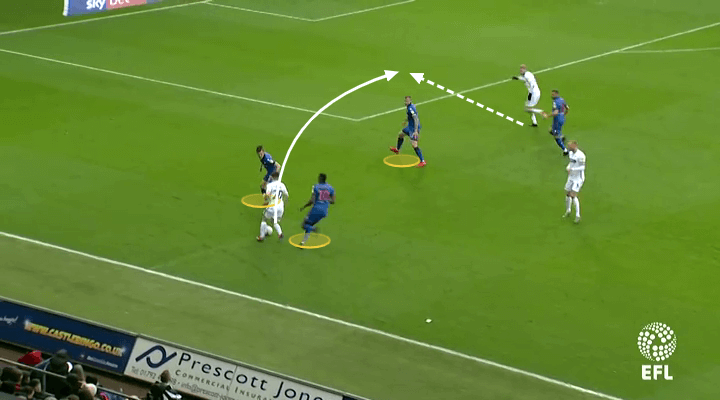 Lastly, James also has a very good shot on him. When left 1v1 out wide, James often cuts in from the left and finishes without breaking his stride. This makes him a really dangerous player. The below image highlights a stunning goal of his from this season. 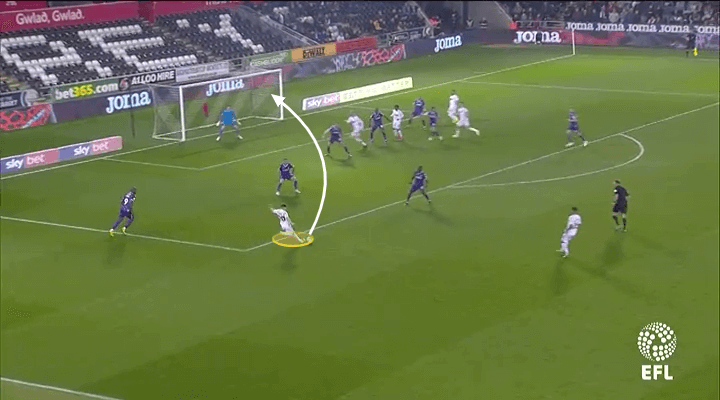 The one attribute that stands out about James is his pace. It truly is incredible how fast he is. It does not matter if you are quick, however, if you cannot use it to your advantage. Fortunately for James, he is also a very good dribbler. He often started games on the left for Swansea and it does seem like that is his best position. Like the image below shows, when taking defenders on from the left James can go either way. He can use his pace to beat the defender along the line, or he can use his technique and quick feet to dart inside and attack the half-space. 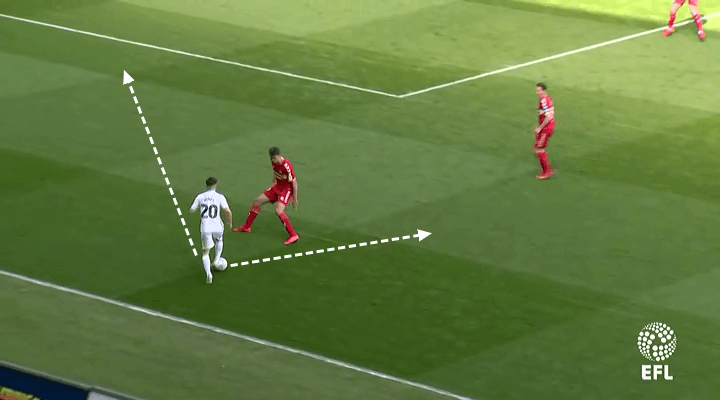 James’ dribbling and pace really is of the highest quality. When facing defenders 1v1 around the box, the defensive team will be in trouble. James will then often, as highlighted below, just knock the ball past the opponent and run past him into the penalty area. The defender will only have two options; bring him down or let him go. Very few full-backs around the world can match his level of pace. For a team expected to attack and play close to the opposition box often, James can be the difference as he would probably win a team three or four penalties every season when beaten defenders will panic and bring him down. 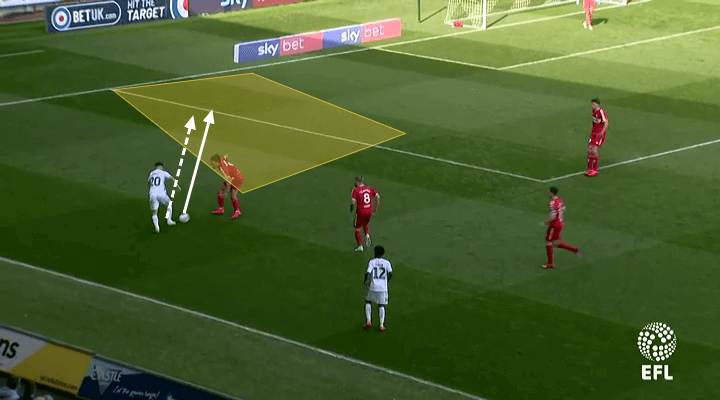 While often starting on the left, James can also play on the right. He will approach the game in a similar way as he can still go either side of the defender. If he is helped by an overlapping full-back, as he is in the scene below, James can utilise his directness and pace to get into the box and shoot or make low crosses. 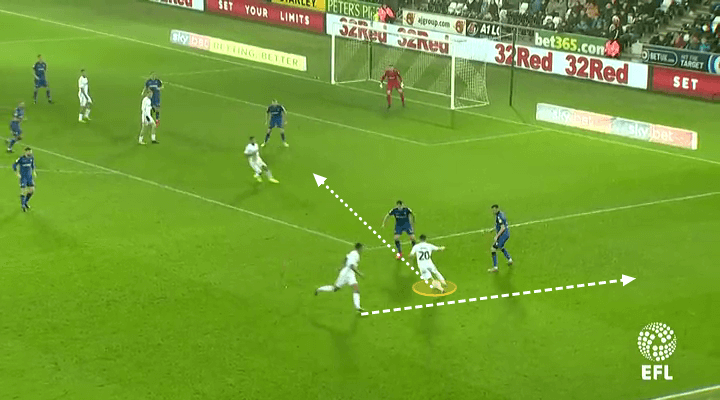 Very few players have the raw ability of James’ pace and the technical level to match it but, if given the right coaching and the time to mature, James can be a top winger in a few years.

Solskjær has repeatedly stated that he wants his team to press teams high up the pitch and that he needs players who are capable, and willing, to defend in this way. This is probably one of the main reasons for United’s interest in James. His pace, physique and aggressiveness make him a perfect presser and he reads the game well enough to know when to counter-press too. The image below highlights a situation in Wales’ clash with Slovakia. Here, a Welsh player has just given the ball away, but James reads the situation quickly and counter-presses aggressively. He wins the ball off the defender and then hammers the ball into the net to score his first international goal. 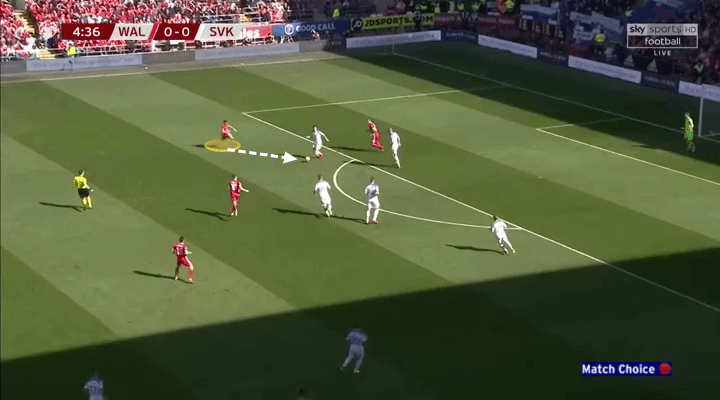 It seems that James is more suited to a high-pressing game than the likes of Alexis Sánchez and Anthony Martial, the two players that would be his main competitors for a place on the left of United’s attack. While not getting ahead of ourselves with James’ ability compared to those two established players, he surely has one up on them in terms of his ability to press.

Given his abilities and impressive form for Swansea and Wales, it is easy to understand why Manchester United have registered their interest in the Welsh winger. However, there is a huge difference to play for Swansea in the Championship to play for Manchester United with all the pressure that entails. In terms of ability, James surely seems to have what it takes to eventually play at the highest stage, but the question will be if he is ready for United already and also if he has the mentality to make it at one of the biggest clubs in the world.