Last summer before the 2018/19 season got underway, Swansea City winger Dan James was knocking on his manager’s door enquiring about Yeovil Town’s interest in a loan move. Fast forward nine months and the 21-year-old finds himself in a totally different position.

His recent wonder-goal in the FA Cup against Brentford where he sprinted 80-plus yards from one penalty box to the other before scoring went viral. His performance in the same competition in the following round got the attention of none other than Manchester City manager Pep Guardiola.

“(Daniel) James is incredibly fast, so it’s not easy. We knew that, we spoke about it.” – Pep Guardiola

Before his FA Cup heroics, Leeds United boss Marcelo Bielsa identified him as their key January transfer target, a signing that fell through for the Elland Road club at the final hour. Most recently, his latest moment of glory saw him score within five minutes of his full Welsh competitive debut, a crucial goal that gave Ryan Giggs’ Wales a 1-0 win against Slovakia in their opening European qualifier.

That’s quite a rapid rate of development for a player who saw a season-long loan at Shrewsbury Town end within a month after he failed to break into their starting XI in August 2017. He said that it was a move that left him feeling “down on myself” but it just goes to show how quickly things can change in football.

In this player analysis, we’ll look in detail at the youngster’s main attributes and his rapid development this season.

Dan James’ pace is a big part of his game but there’s far more to the 21-year-old than just his lightning speed. His raw pace is of course a key attribute of his, and equally as important is his ability to maintain his level of sprints during the game, something that Graham Potter has alluded to this season.

“Dan’s not playing against bad players, they’re not physically weak defenders, but he leaves them for dust, The ability to sprint repeatedly, it’s as high a level as you’re going to see. He’s got lots to work on but he had an end product today and I thought he was sensational.”

Those were the words of Graham Potter after James’ incredible solo goal during his side’s 4-1 FA Cup home win against Brentford.

Similar in some ways to that goal above against Brentford, James reacted quickly against Slovakia, sensing an opportunity to race onto a loose ball and punish the opposition in clinical fashion.

Below, he is circled as he drifts inside and off his left flank to add attacking support through the centre. As soon as he sees the pass towards Gareth Bale is intercepted, James pounces on it. Thanks to his pace, the Slovakian defender takes a second too long in possession on the edge of his own box, leaving James to steal possession and unleash an unstoppable low, driven shot past the goalkeeper. Cue wild celebrations in the corner; it was “the stuff of dreams”, as the Sky Sports commentator summarised well. 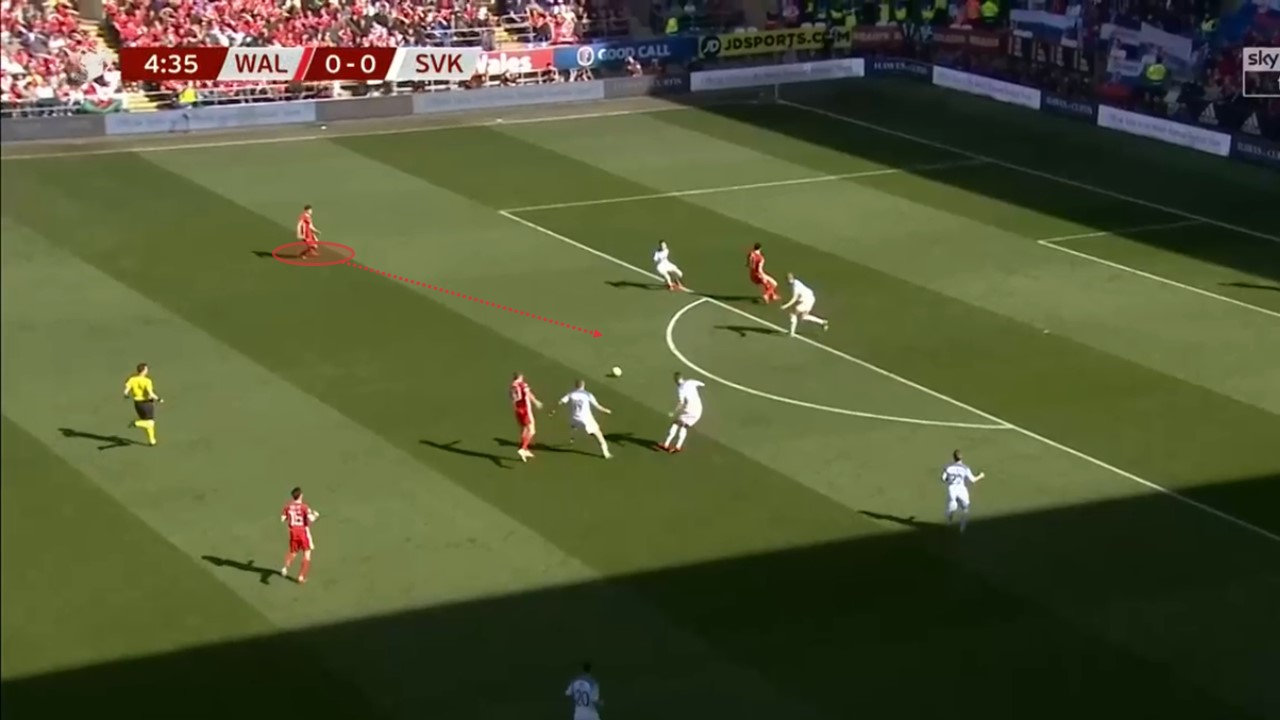 James also uses his pace in a variety of different situations whether his team are in possession or not. In possession, he can provide a useful attacking outlet down the flanks. His team-mates know that if there’s space in front of him, all they need to do is aim a long ball and he’s odds-on favourite to win the foot race. 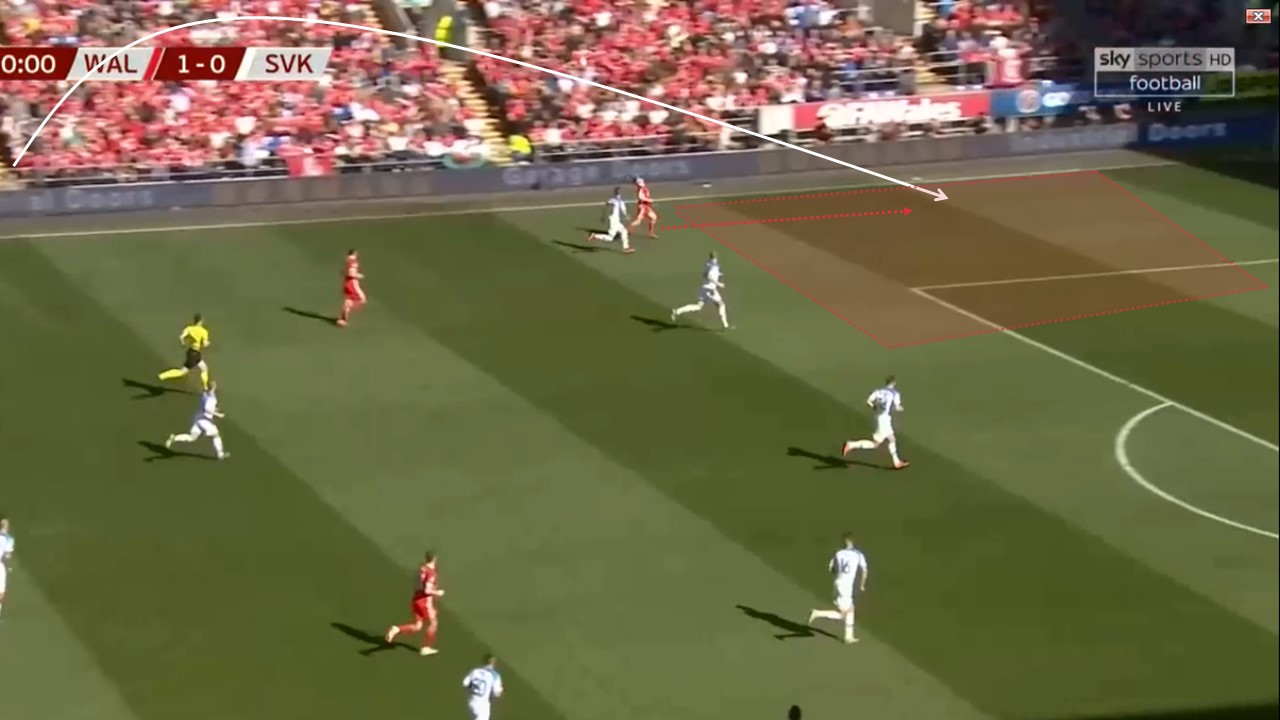 In the example above, a long ball is played over the top. James wins the race, and is able to hold the ball up in the final 18 yards of the pitch and wait for his teammates to catch him up before picking out a pass.

In addition to that, when his team-mate in possession is in closer proximity to him, they can simply play a pass into space ahead of him in a wide area and James is in behind his marker and in a dangerous attacking position. 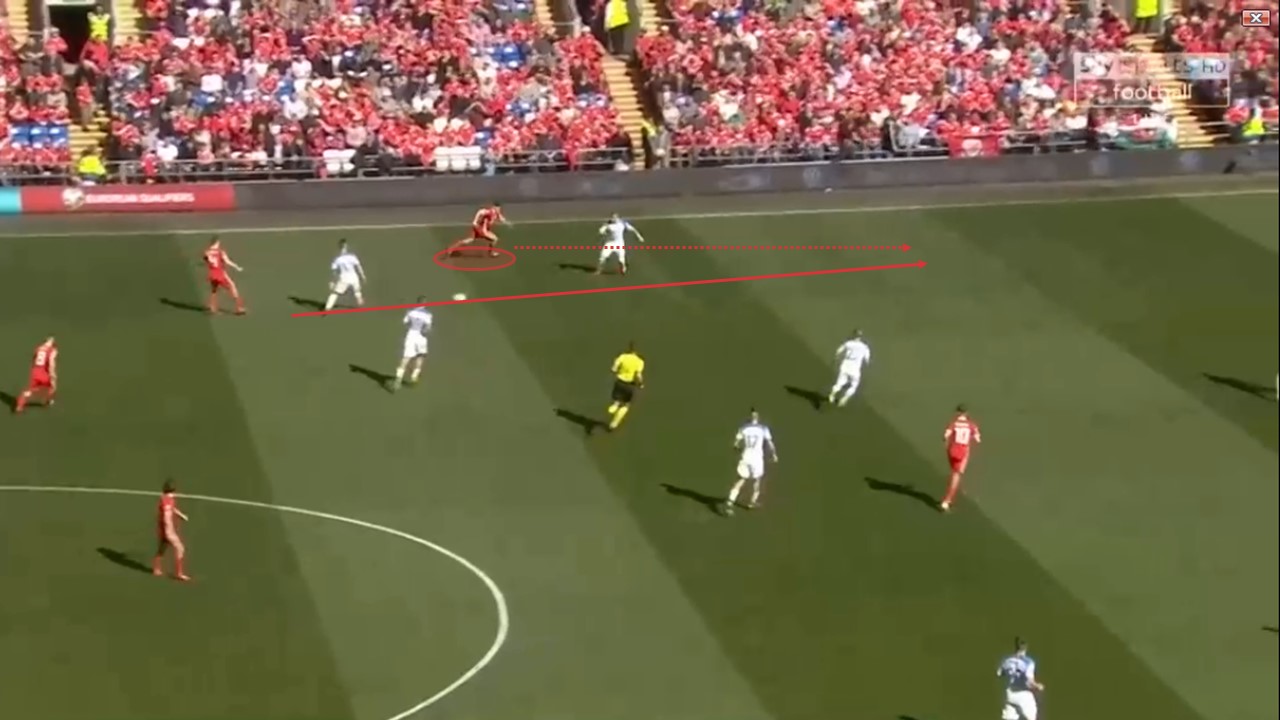 When he has the ball at his feet, again, if there’s space in front of him, all he has to do is knock the ball ahead five or 10 yards and he’s past his marker and in behind the defence.

Another common trademark of his is the inside flick. Rather than simply looking to make runs along the touchline and putting in crosses from near the byline, James looks to cut inside to offer a more useful threat in the half-spaces.

In the example below, James flicks the ball inside his marker with the outside of his right foot, accelerating away from the defender and into the red area of space, giving him a better chance of creating a goalscoring opportunity. This is something we’ve seen James do for the last few seasons including his excellent performances for Swansea’s under-23 development squad. 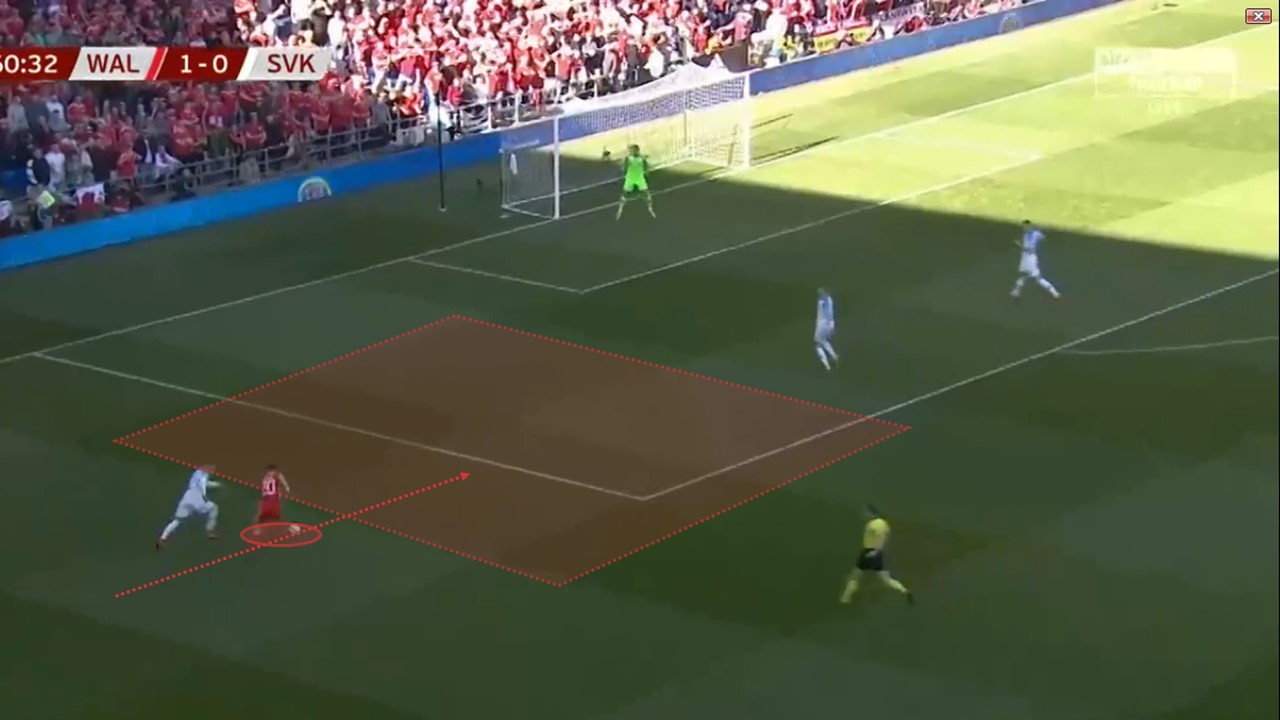 The image below shows his key attacking actions for Swansea City in the Championship this season. As you can see, a number of these are played from near the edge of the penalty area with the majority of them played into excellent goalscoring areas in front of goal and within 12 yards of it.

The yellow lines show key passes or shot assists, the blue lines are goal assists and the bronze lines are big chances created. The dots show various types of shots, including missed, saved and shots hitting the woodwork. 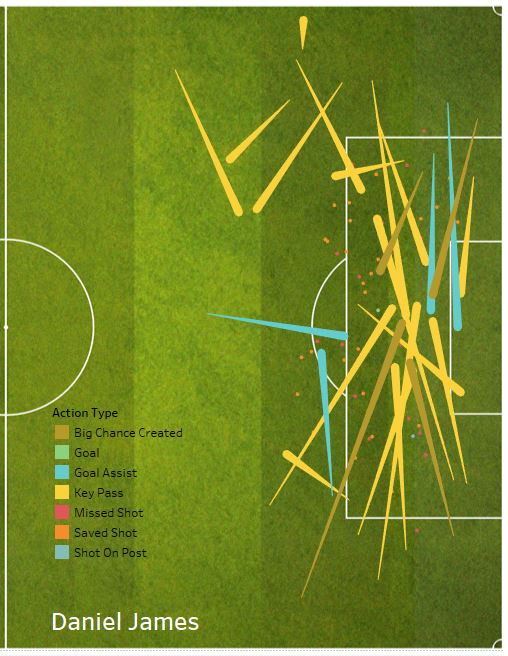 Out of possession, James also puts his pace to good use. In recent games for Swansea City, he’s been an excellent contributor in the high press and we also saw glimpses of this during last Saturday’s game at the Cardiff City Stadium. 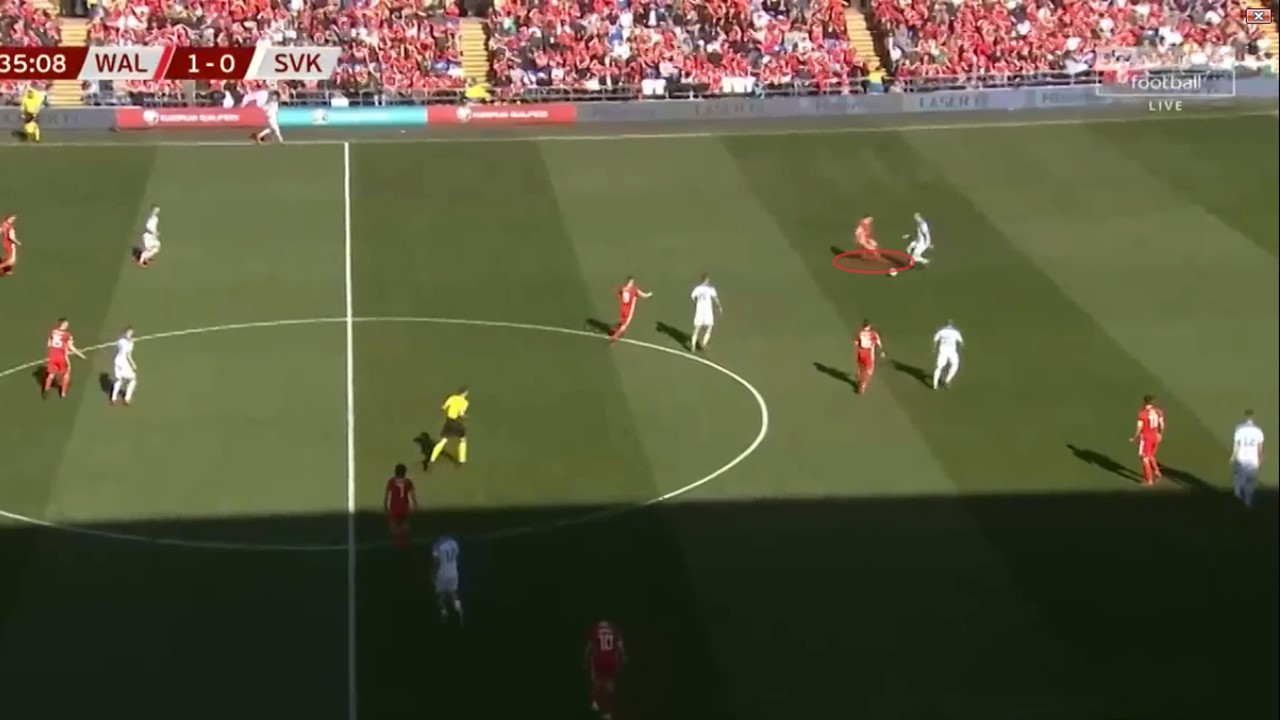 This is surely an attribute that attracted the attention of Marcelo Bielsa. His ability to cover a lot of ground quickly and to get across the pitch when pressing would suit Bielsa’s high-intensity style perfectly.

The ability to start his own attacks

Rather than occupying a high attacking position and waiting for service and balls to chase, James also likes to drop deeper into midfield to make interceptions and tackles and thus create counter-attacking opportunities for himself and others.

With his acceleration from a standing start, James can surprise opposition players in possession, seemingly coming from out of nowhere, reading the game well and intercepting passes as they’re being played.

The image below is a good example. He moves quickly off his left flank as he notices the forward pass being made before blocking the pass and winning the ball back for his team in midfield. He can then help the ball onto a teammate and quickly make a run into space down the left flank, leaving two right-sided Slovakian players exposed and out of position. 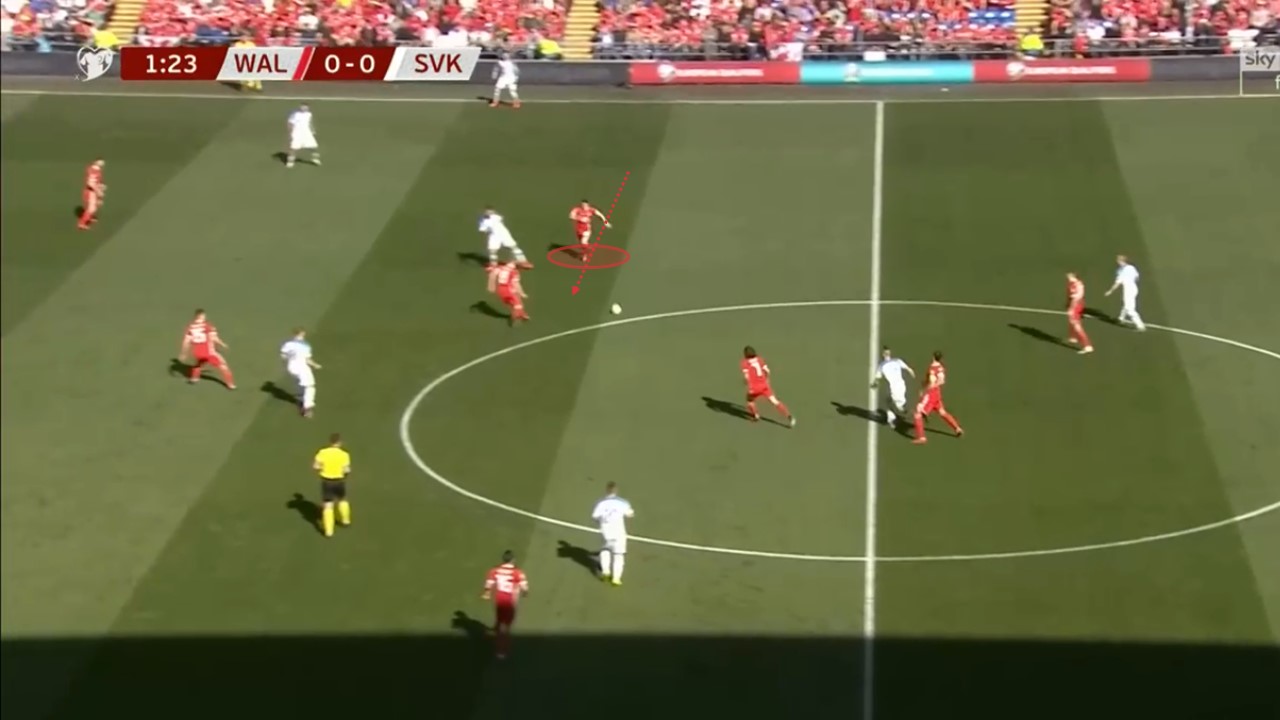 Whilst his strongest position is as a winger on either side where he’s played most of his football in the Championship as shown in the heat map graphic below, he can also play right across the attacking line. Swansea City manager Graham Potter likes his players to be versatile and able to play in a number of different positions to suit his flexible nature when it comes to formations and tactics. 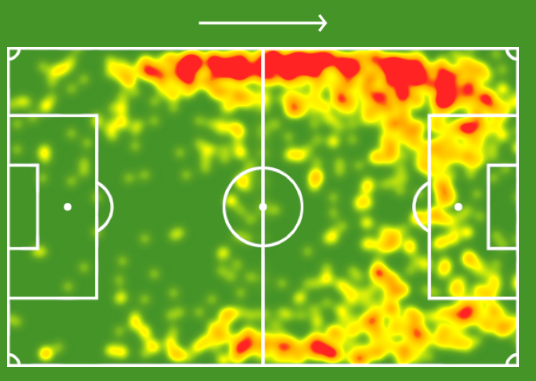 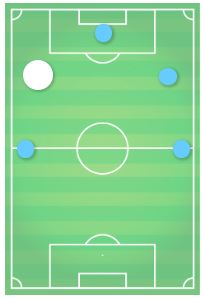 During striker Oli McBurnie’s recent absence, Potter has played James through the middle as a false nine. He’s also versatile in terms of his ability to play with either foot. During Wales’ 1-0 home victory over Slovakia, we saw him fire home the early winner with his right before later sending in quality crosses with his left (below). 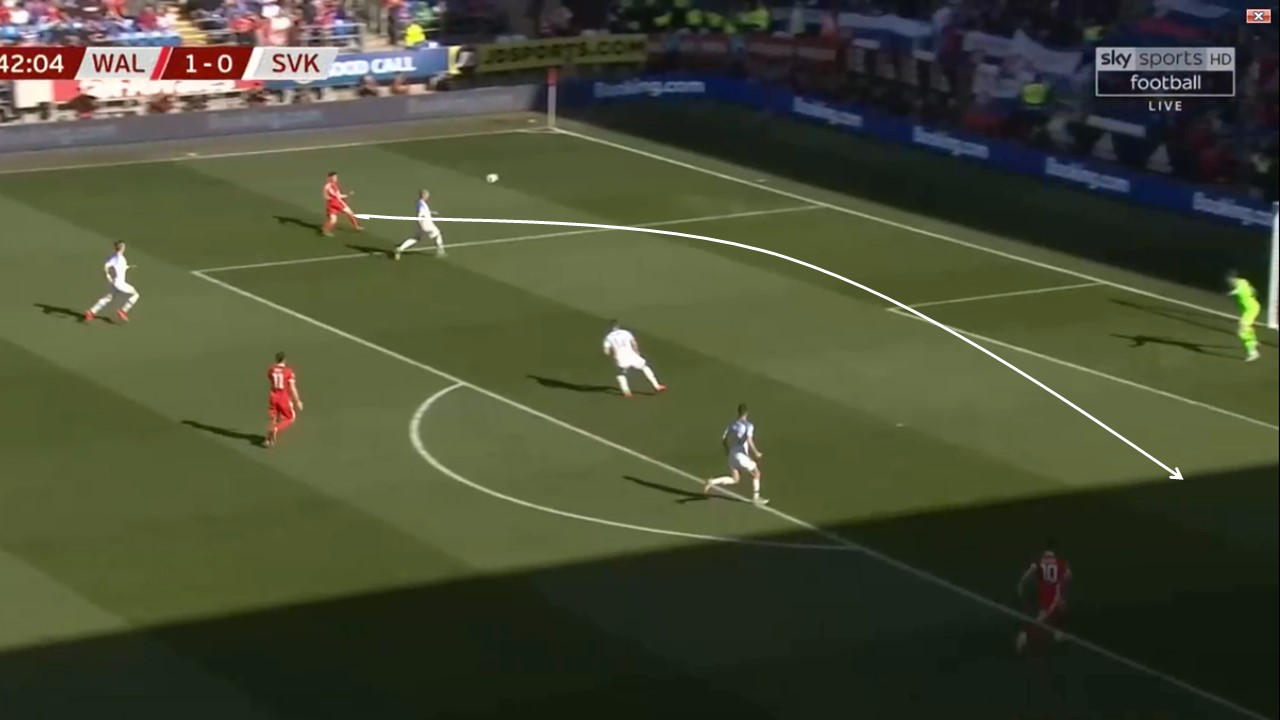 It’s a surprisingly rare and under-valued attribute of a player to be confident using either foot. Some players, like his Swansea team-mate Wayne Routledge, would rather attempt a rabona cross than use their weaker foot. Confidence with either foot removes that weakness of opposition defenders trying to show him onto his weaker side. You simply can’t do it if the player doesn’t have one.

Dan James was an unknown player in the early months of the Championship season but his outstanding performances and alarming pace means that he is now targeted as a player that opposing teams must stop to limit Swansea’s attacking threat.

“Now they double up on me or stay closer and sometimes I’ve got frustrated but it’s just about – if I am not getting the ball what can I do to get others on it?” – Dan James

Playing in a central attacking role at Norwich City recently, Dan James proved to be a handful in the first 45 minutes thanks to his constant movement across the zones in front of the penalty area.

Constantly on the move as shown in the following screenshots, James looked to drag opposition defenders out of position and to create space for his teammates to run into. 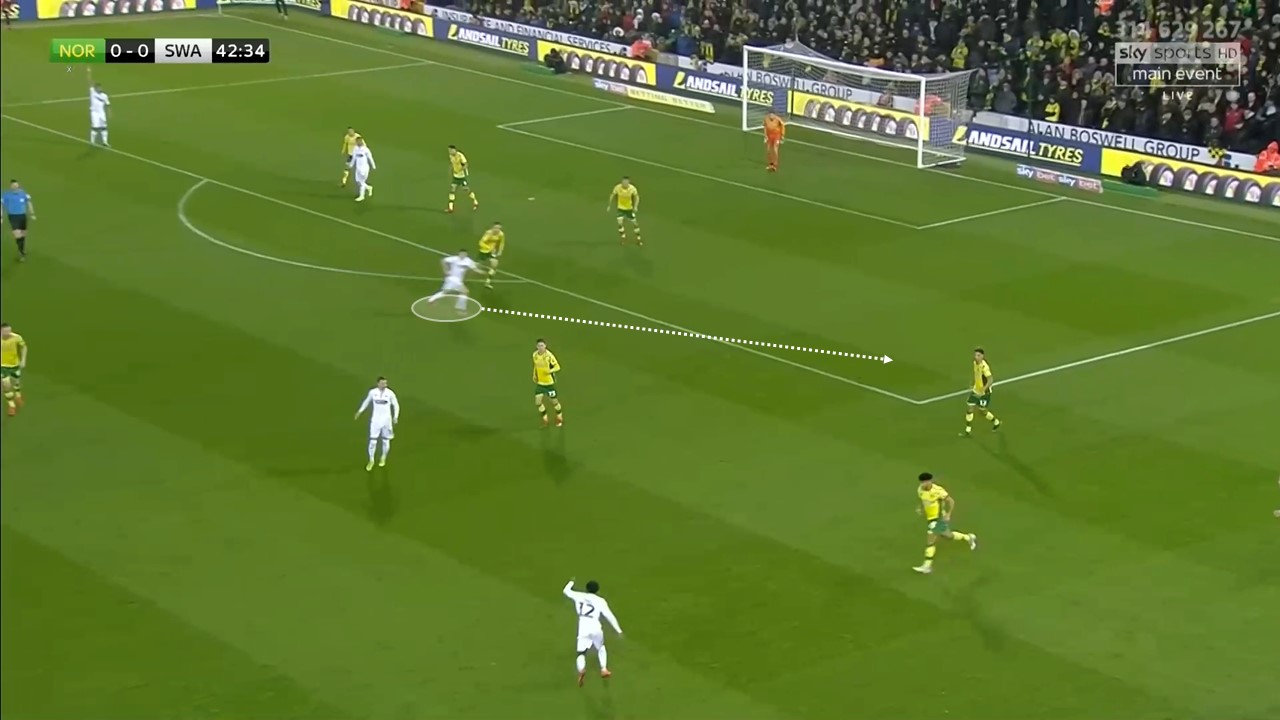 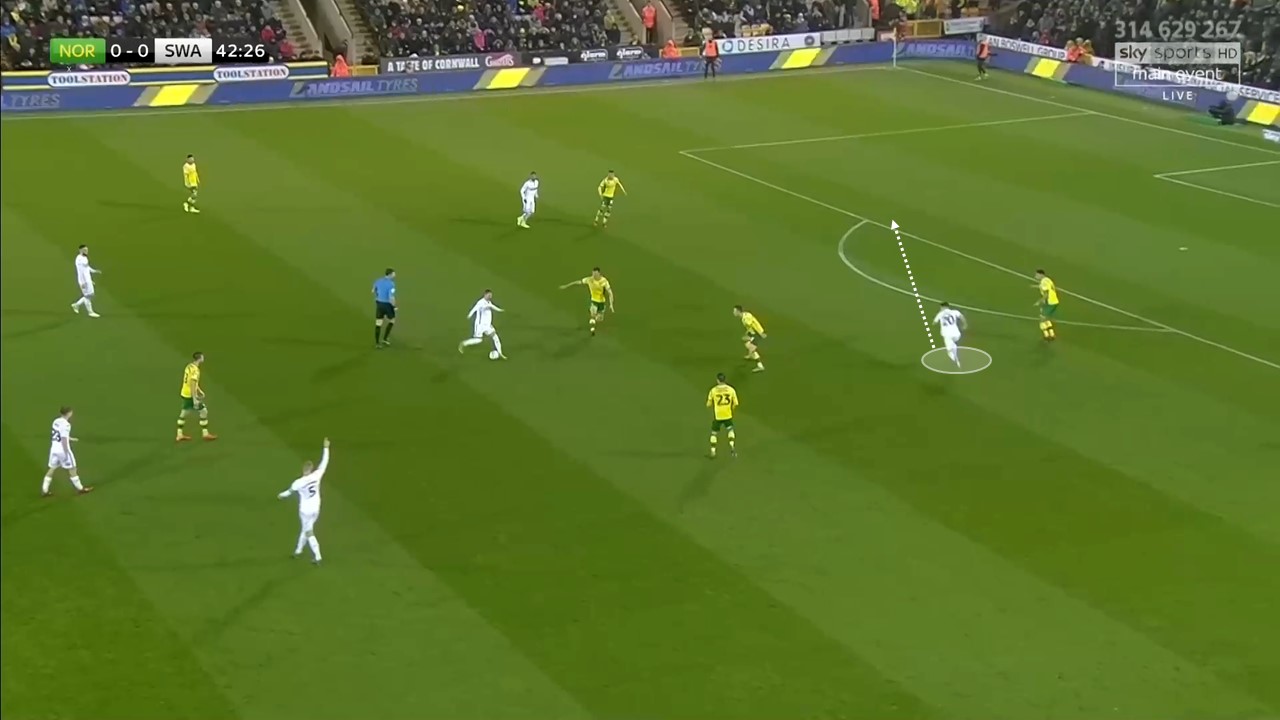 James also makes a great effort to ensure that his full-back behind him is not defensively exposed as he does often occupy a high position in a wide area. Looking at Swansea’s average position maps this season though, James is usually the most advanced player in the team.

Despite this, James shows great determination to get back and help his team defensively. On numerous occasions, he dropped back to support Spurs’ Ben Davies and make useful tackles, blocks and interceptions, preventing Slovakia from advancing their attacks into the final third. 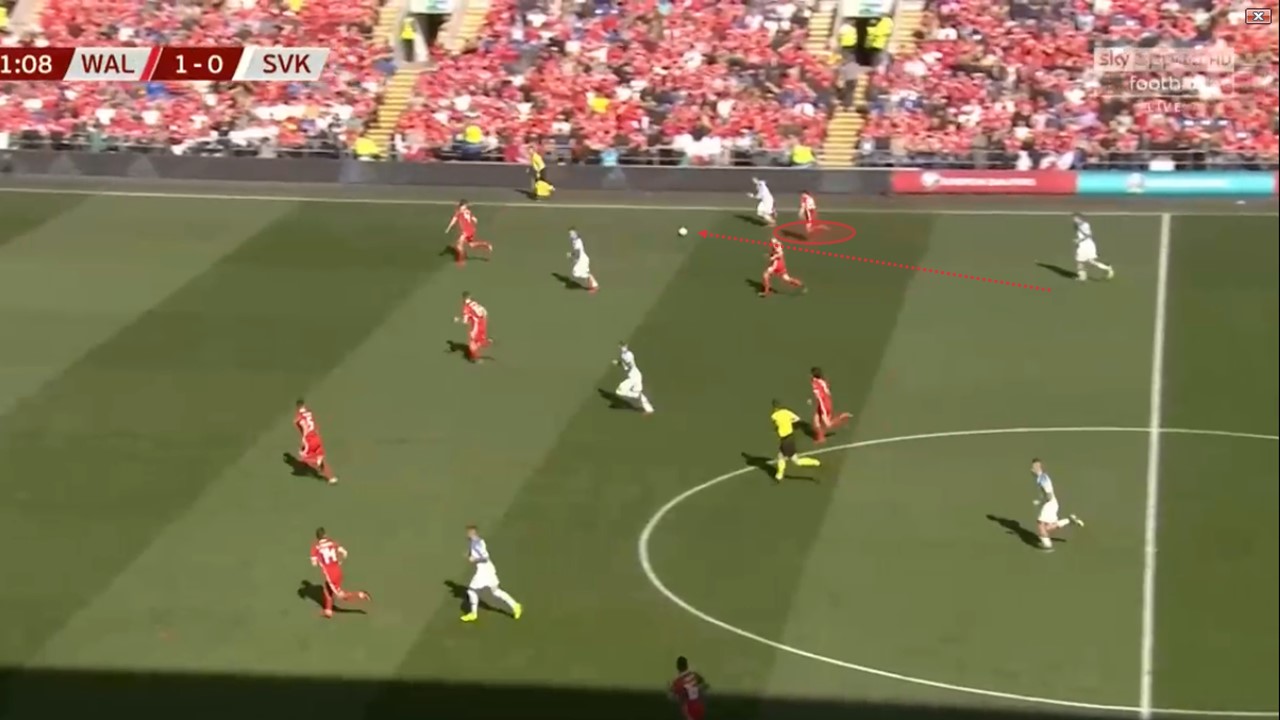 In the second half, we saw him dropping deeper into the defensive line, as the image below shows. By doing so, he ensures that Wales match Slovakia 3v3 in the wide channel. 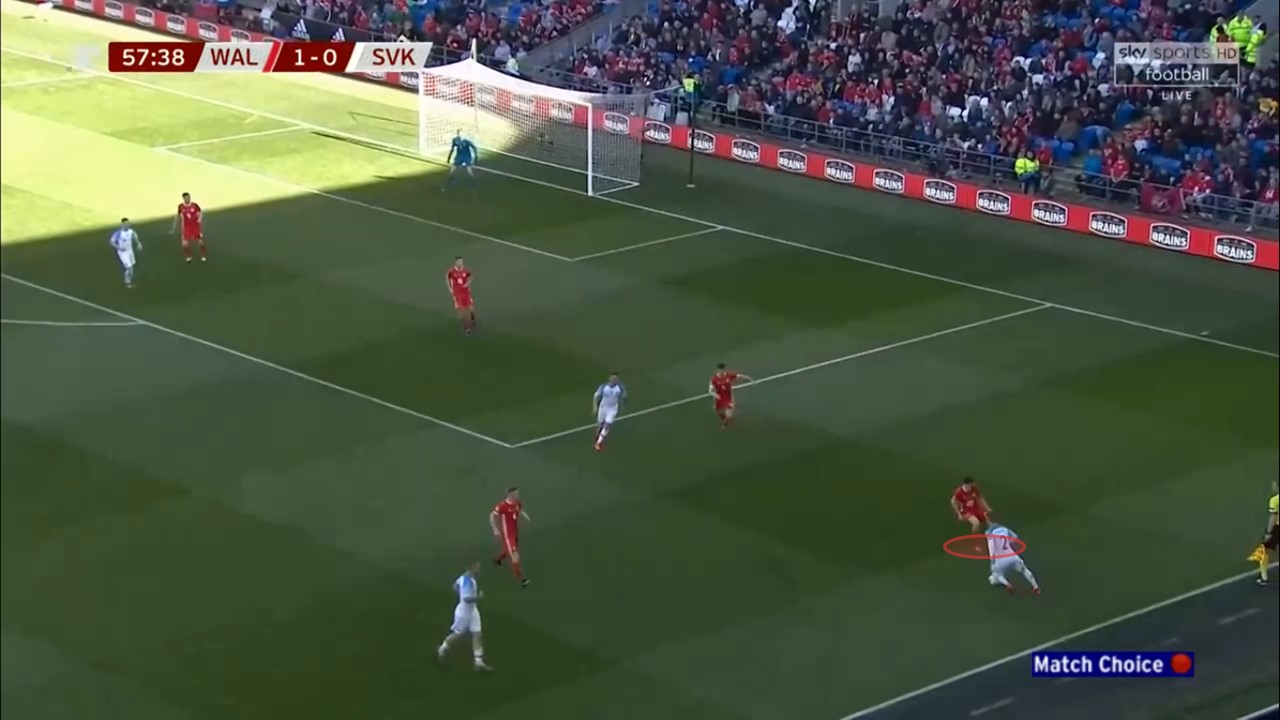 Aged just 21 he’s far from the complete player, and as we saw in Graham Potter’s quote earlier in this player analysis, he has “lots to work on”. However, there’s absolutely no doubt that he possesses a wide range of attributes, an excellent mentality and work rate that could see him develop into a special player.

His rapid development this season has been quite sensational and you can only imagine how much better he’ll be after another full season of regular football. That’s something that he continually needs. Contract talks don’t appear to be progressing too well at Swansea City and there’s no doubt that he’ll have a wide choice of options in the summer as he enters the final year of his current deal in South Wales.

One of the main areas of where he needs to improve on is his final ball and decision making. He has the tendency to lose composure in front of goal, either aiming shots in good goal-scoring positions wide of the target or lacking power. The image below shows a shooting chance against West Brom recently but the shot, just to the left side of the penalty spot, is aimed straight at the goalkeeper and is saved. 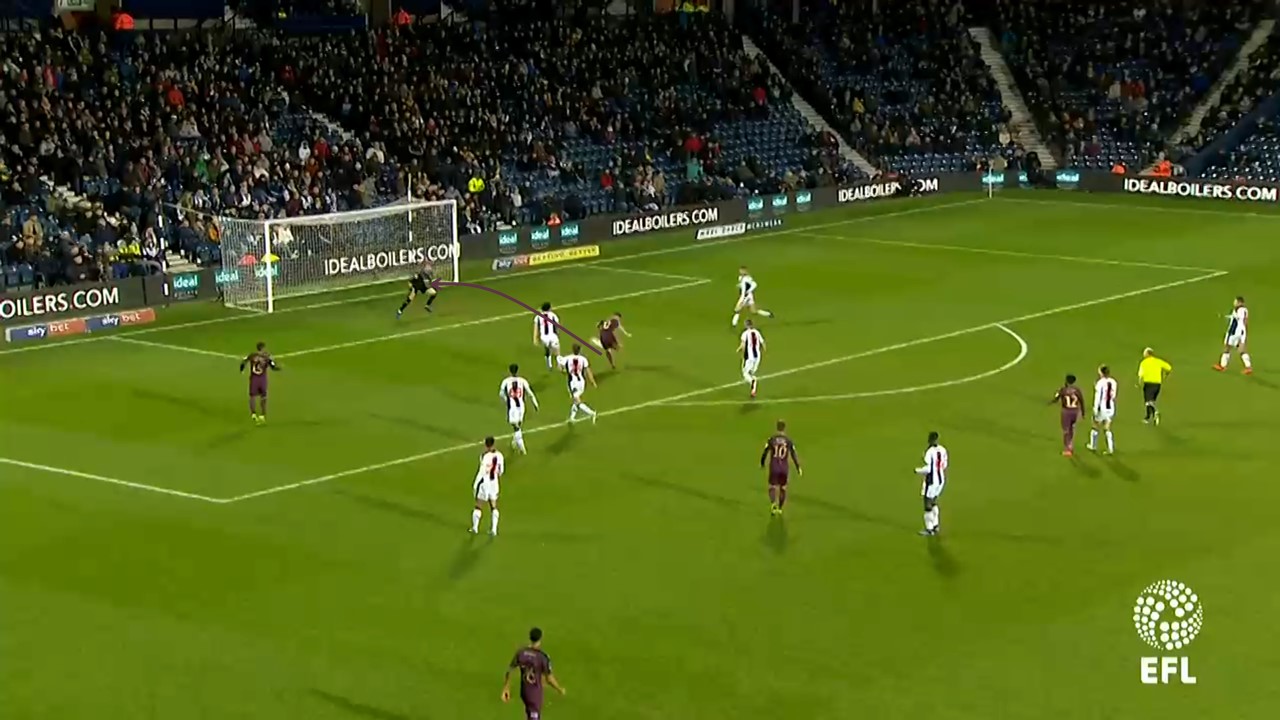 James has already shown improvement in this area in recent weeks. Earlier in the analysis, we saw his heroics for Wales scoring in the 1-0 win against Slovakia, and his excellent composure to complete a superb solo run against Brentford in the FA Cup. Over the season though, he has underperformed in terms of xG.

According to wyscout, his xG (expected goals) in the Championship this season is 5.55 but has hit the net on just two occasions. Nevertheless, as Raheem Sterling has proven under the guidance of Pep Guardiola, this is an area of a winger’s arsenal that can be worked on and improved considerably under the right coach.