Anthony Martial: Why the forward can lead the line for Manchester United under Erik ten Hag – scout report

The last few seasons have been somewhat of a struggle for Frenchman Anthony Martial. The forward has struggled for regular minutes and has hit a plateau in terms of goalscoring. Following his move to Manchester United in 2015 for £36 million, a record for a teenager at that time, it’s fair to say Martial hasn’t gone on to set the world alight.

The 2021/22 season saw Martial spend the second half of it on loan in La Liga with Sevilla, a move that turned out to be underwhelming with the striker only playing 12 times and finding the net just once.

Following the installation of new boss Erik ten Hag, the 2022/23 Premier League season can be seen as a fresh start. With uncertainty around Cristiano Ronaldo and his future, Martial’s services may be called upon more regularly. Furthermore, with the ageing Ronaldo pressing less and less, Martial could be more suited to the style of play ten Hag prefers.

An impressive start to pre-season has seen Manchester United fans gain new confidence around Martial in the hope that he can produce a big season leading the Red Devils’ forward line. With 3 goals and 1 assist so far in pre-season, those involved in Manchester United will be hoping this form continues. This scout report will provide a tactical analysis of his performances throughout the pre-season preparations. It will be an analysis of the forward’s style of play as well as looking at where he could fit into the new manager’s tactics.

Martial has been deployed as a wide forward, predominantly on the left, and also centrally as a ‘9’. He benefits massively from space in behind as he loves to run past defenders. Martial drifts wide even when played centrally so his teammates must recognise this and ensure someone fills the space he vacates. He tends to drift towards the left where he feels most comfortable. 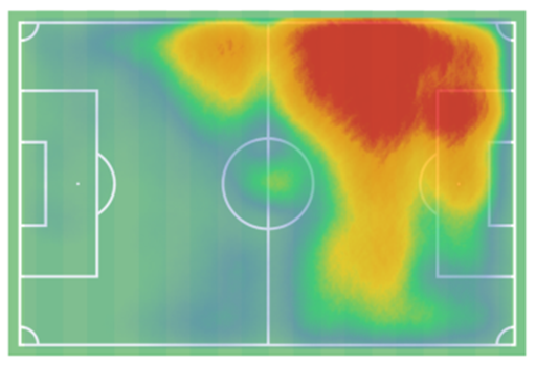 Martial likes to pull wide to the left as he loves to come inside onto his favoured right foot. His ability to come inside and beat a man is one of his key attributes. Alongside, his pace and strength Martial could be very effective as an inside forward. Manchester United have two very similar players in Marcus Rashford and Anthony Martial as both like to play on the left but can also be used as a ‘9’.

In pre-season, ten Hag has deployed the Frenchman centrally with Rashford on the left. Martial is well suited to the striker role as he has good intelligence and makes brilliant runs and off-the-ball movement. His ability to run on the blind side of defenders is exceptional and something that will see him get lots of chances if regularly played as a ‘9’. 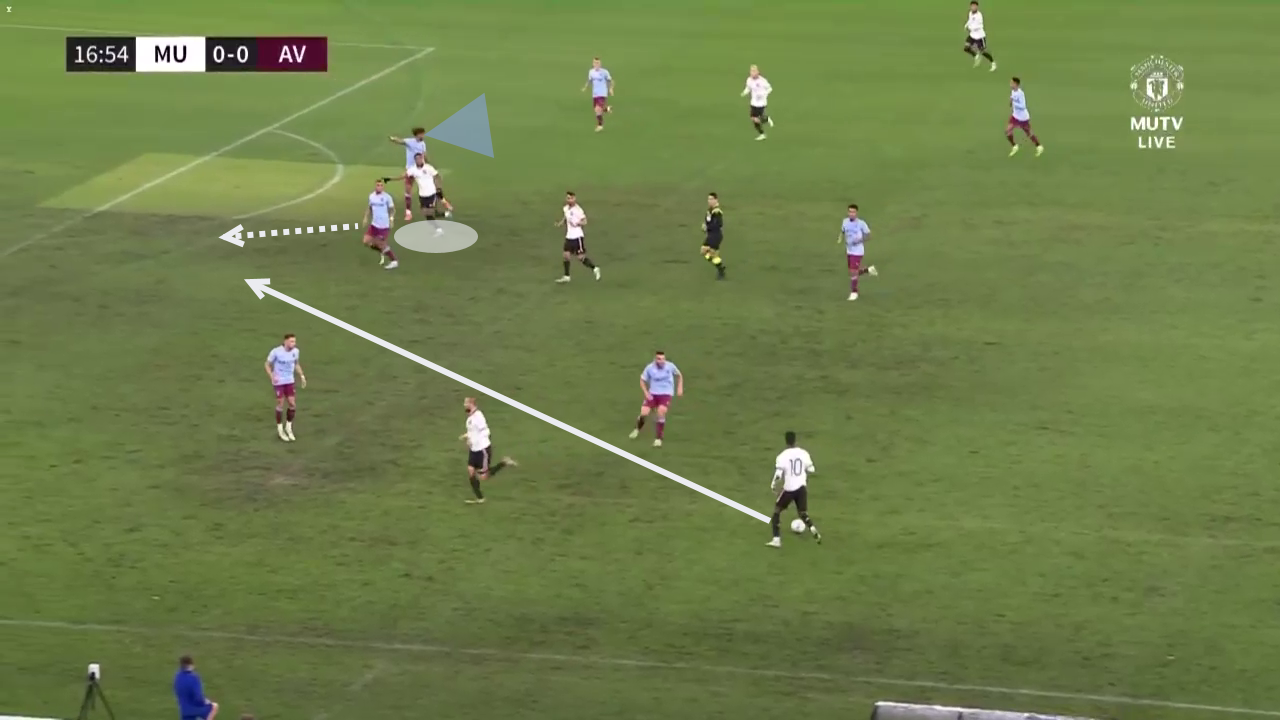 Using Martial in a 4-2-3-1 as the sole ‘9’ would be effective as rotations with Rashford on the left could cause defenders issues. Along with this Martial loves to drop deep to receive the ball. When playing centrally Martial is comfortable in having his back to play and dropping into the midfield to link up play and become involved in the game.

Martial previously playing on the wing has influenced his style of attacking. He often likes to run into the channels and attack the space between centre-back and full-back. This clever movement can cause damage and runing in behind is Martial’s game. 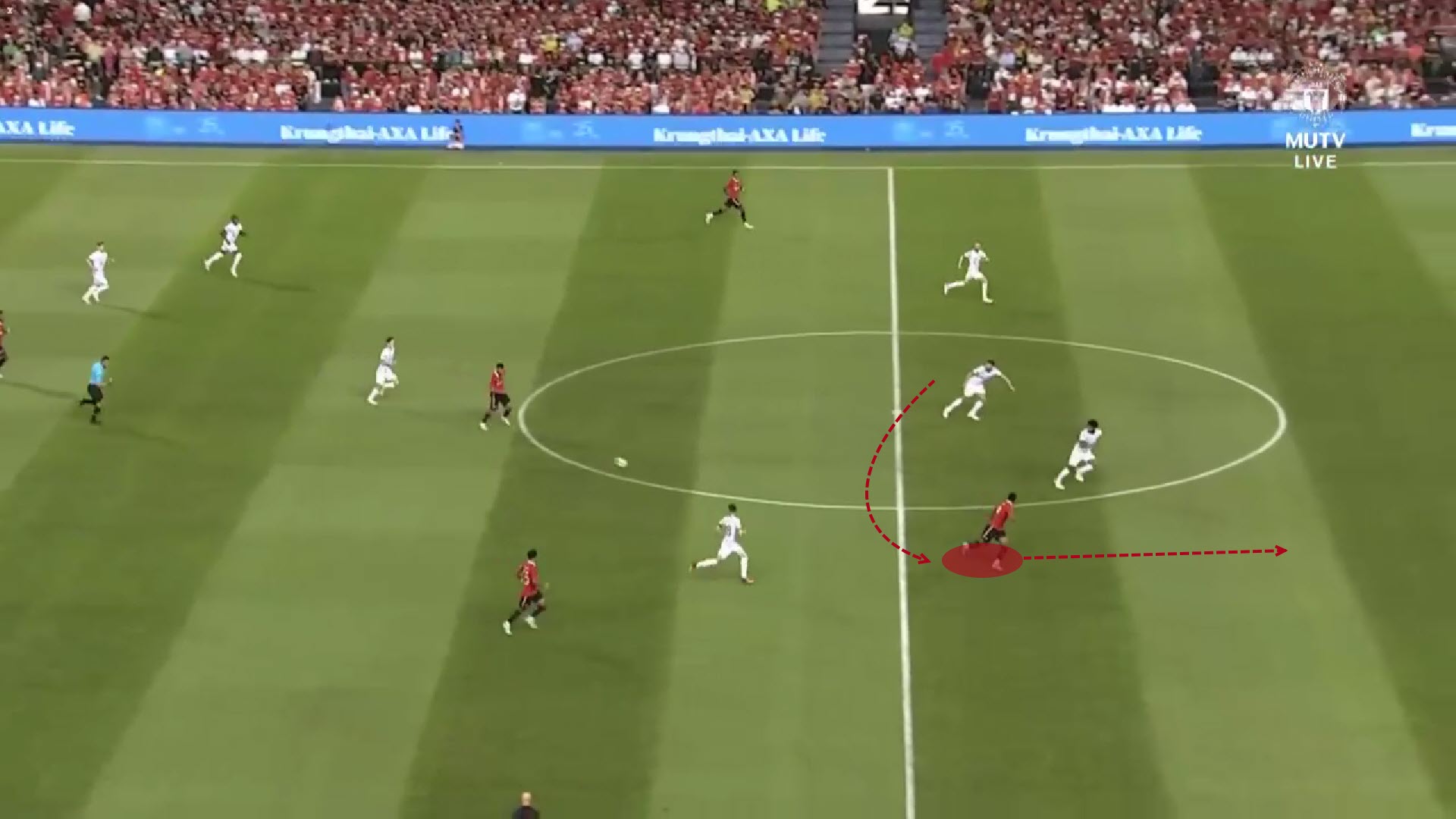 Glimpses of this were seen in the preseason and, hopefully, it can be worked on and become a nice method of attacking transitions for United. Martial’s pace really shines in these wide areas which are where he can be most effective driving with the ball.

The way in which ten Hag wants his side to play is a somewhat physically-demanding style. The Dutchman sets his team up to aggressively press the opposition, something which Martial is particularly good at. The ageing Ronaldo has had to adapt his game to conserve his energy and is no longer a consistent pressing forward. This could lead to ten Hag favouring the French attacker.

Last season at Ajax, ten Hag utilised Sebastien Haller as his forward player. He was used as a target man and helped to build up play. Some data comparisons below show how Martial compares in key areas. The data used is from Martial during pre-season under ten Hag and Haller across the 2021/22 season. Consideration for the difference in the number of games played between the pair needs to be taken on board but the early signs show that Martial is going to fit the bill to be ten Hag’s frontman.

It is interesting to see the difference in some key areas such as dribbles, where, surprisingly, Haller comes out on top. Martial is arguably one of the most direct players in the Manchester United squad and is an area which can be improved upon with encouragement and belief.

Moreover, the high number of interceptions per 90 for Martial emphasises his fit to ten Hag’s system. Pressing and intercepting in the front area is an important part of the game for ten Hag and Martial is averaging more interceptions than Haller.

Another area to look at is the touches in the penalty area per 90. Martial has racked up an average of 5.22 which shows his willingness and intelligence to get into dangerous goal-scoring areas. If Martial continues to perform as he is then there is no doubt he will score goals for this team. Last season Haller racked up 21 league goals in the Eredivisie. 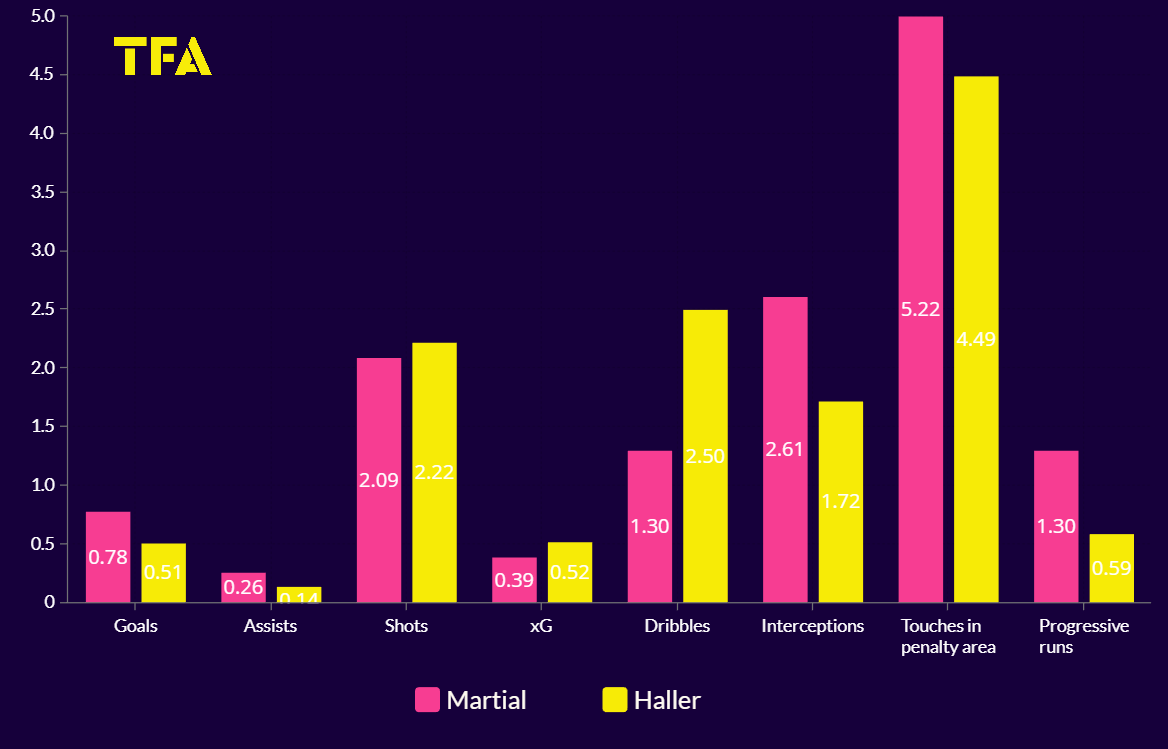 All data values are per 90 minutes.

Martial’s pressing ability has been well used over preseason with his goal against Liverpool coming from pressing at the right time. His discipline and willingness to work hard for the team rewarded him with a goal. Below you can see Martial closing down the Liverpool defender before he wins the ball back. 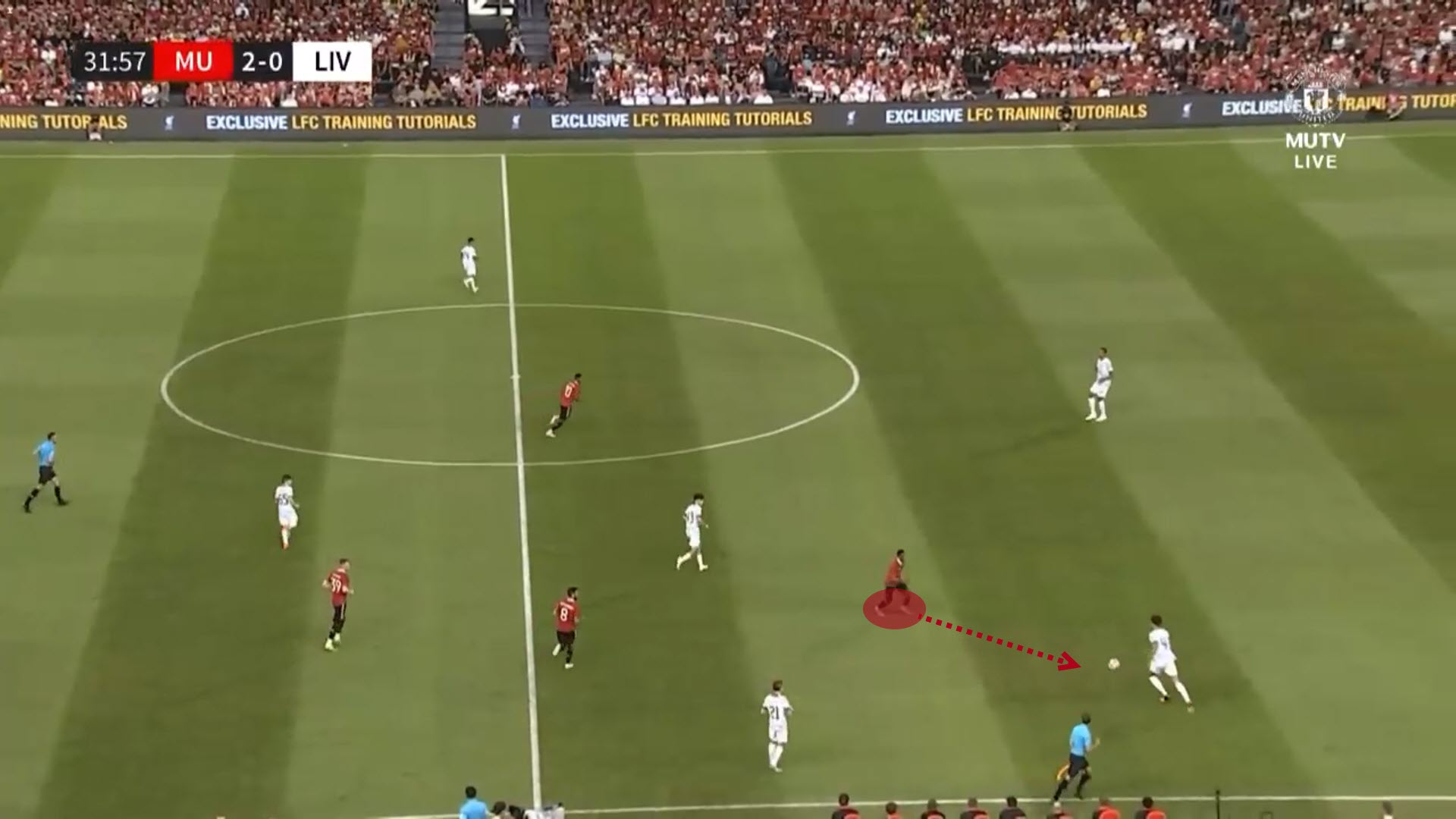 Once in possession, the pace and dribbling ability shown to quickly capitalise on the out-of-position defence is brilliant. Martial uses his intelligence to drive into the space before lifting the ball delicately over the goalkeeper. 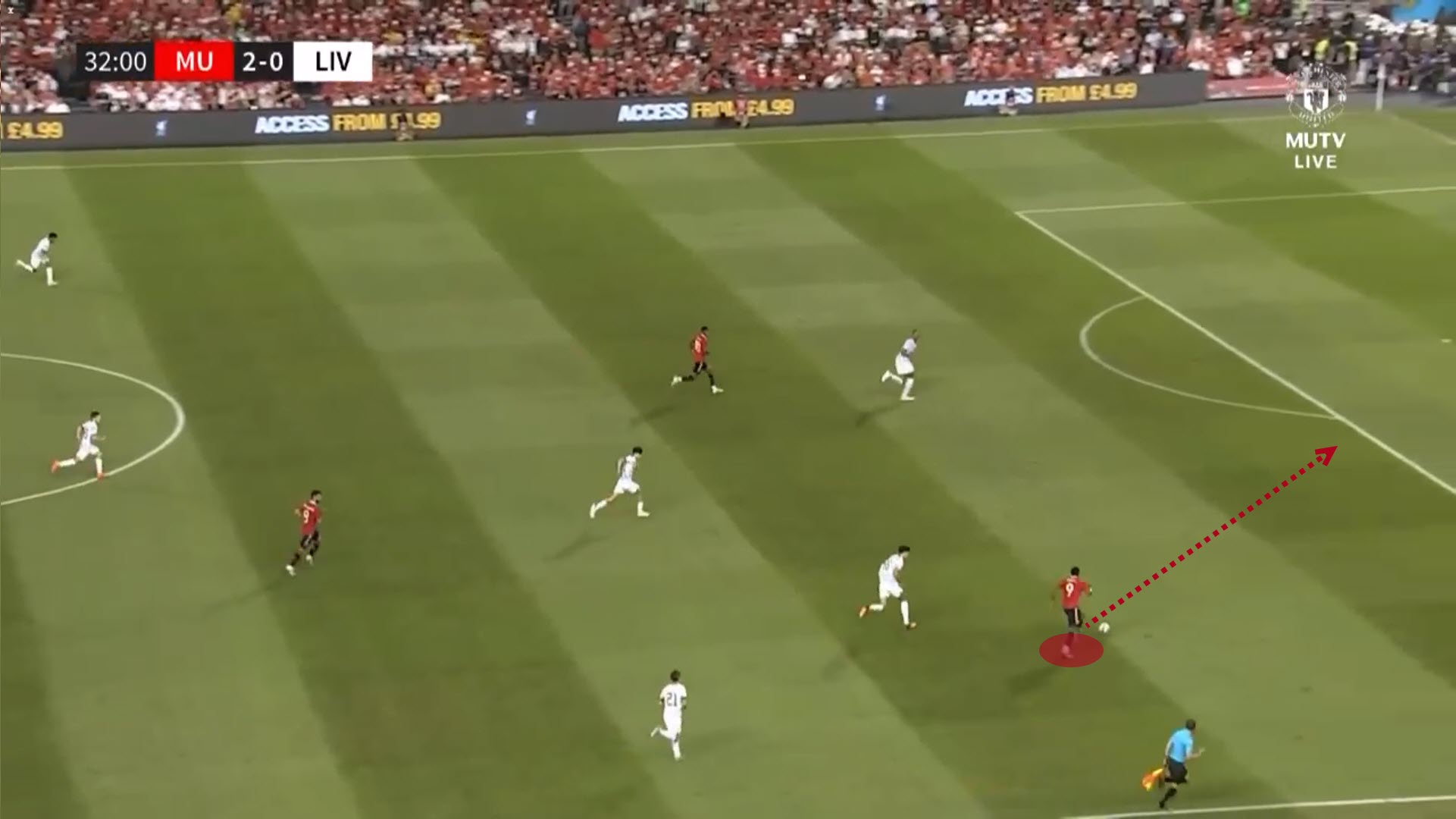 Throughout the preseason matches, Martial has been dropping deep to get the ball, as previously mentioned. This is something which is important if you are playing as a sole ‘9’ as most of the time you will need to get yourself involved in the game. The nature of playing up front by yourself is that the game can easily pass you by if you make it easy for the opposition to mark you.

Martial is brilliant at switching his style of play up. He can be direct and run in behind but is also more than comfortable dropping deep and receiving the ball. His physicality and stature make it easier for him to hold-up play and link his teammates.

By doing this in ten Hag’s 4-2-3-1 system the ’10’ would be able to make a run from deep into the space created by Martial dropping deep. Bruno Fernandes is intelligent enough to develop this relationship and understanding with Martial and is definitely something that could happen. 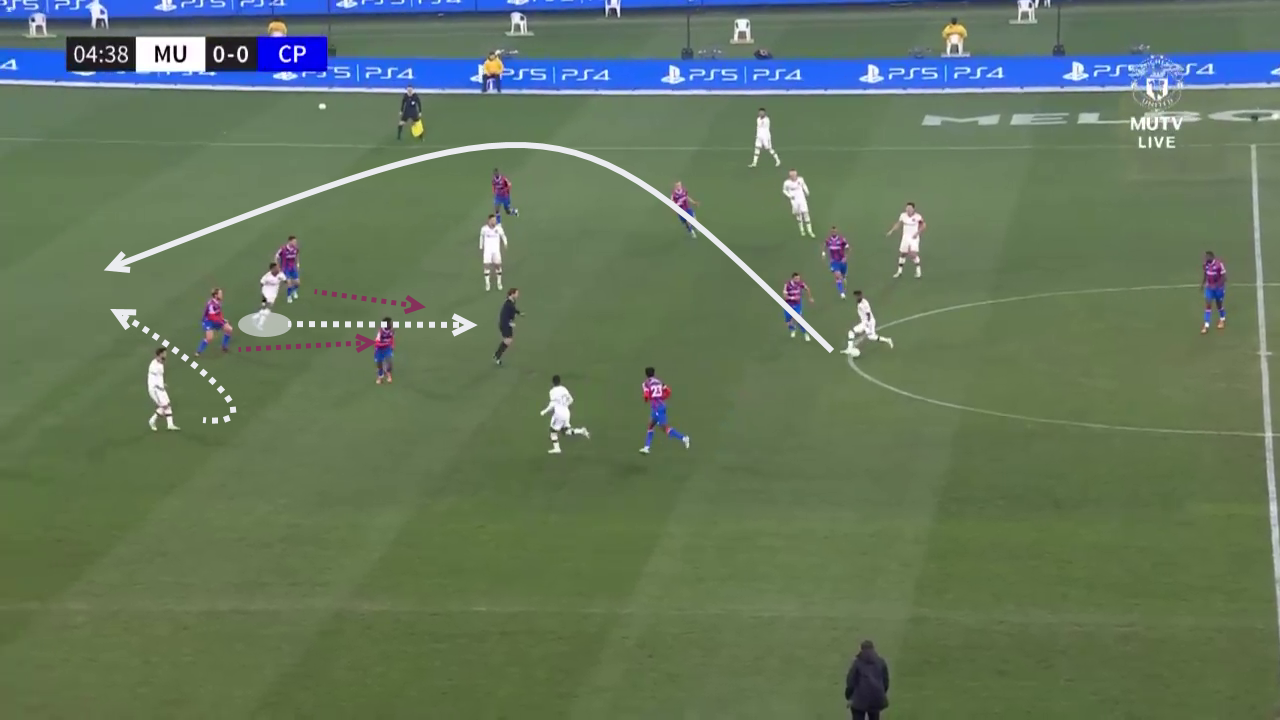 Further up the pitch, Martial can use his directness to link up play and create goal-scoring chances for his teammates. His natural ability to beat a man 1v1 enables him to find himself in areas of real danger. Martial’s intelligence and ability to remain calm and pick out a pass will serve Manchester United well this season. 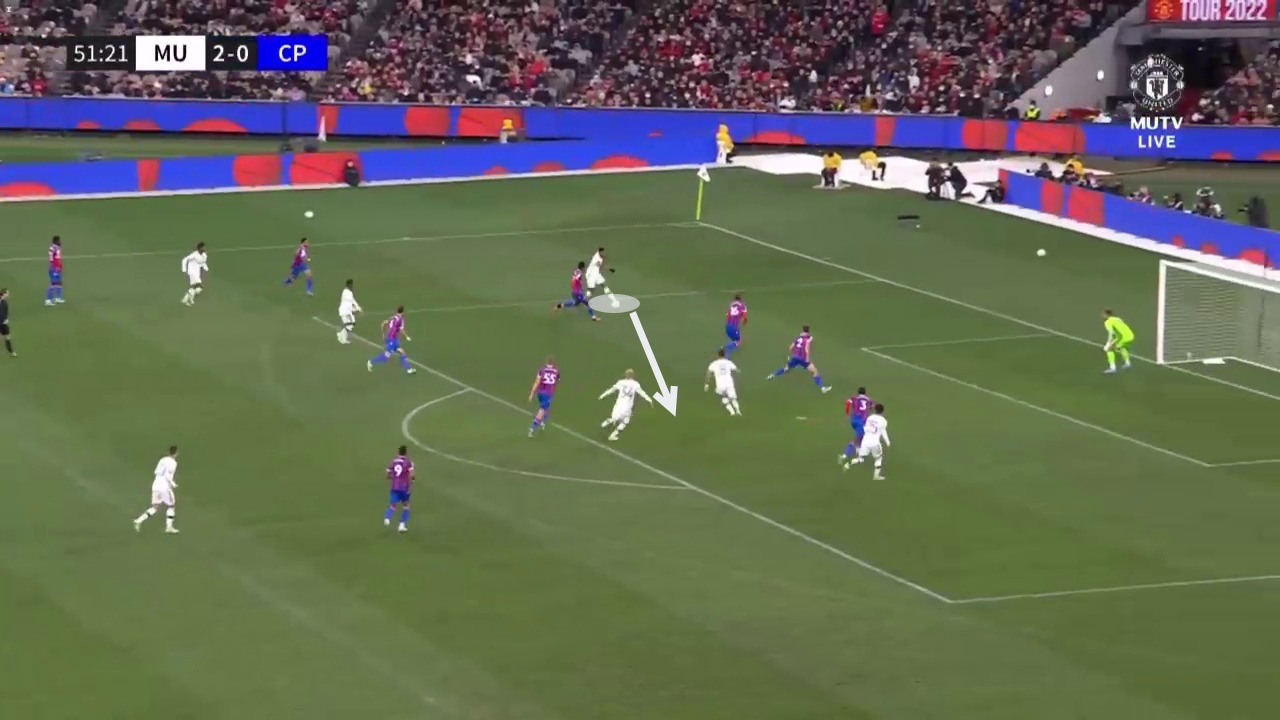 The use of a number ’10’ will benefit Martial’s game massively as he loves to drift wide which in turn will leave space for players to attack. As well as this, the link-up between the striker and ’10’ is important when attacking the box.

Martial is a deadly finisher inside the box with almost all of his goals coming from there. The Frenchman is known for his brilliant composure and awareness. As shown earlier his goal against Liverpool is a prime example. He carried the ball from the halfway line and calmly lifted it over the keeper with such elegance.

It is clear that Martial is a confident player and needs a good run of games and a few goals early on in the season to boost his confidence. The performances over preseason will have gone a long way to helping this.

Inside the box, the game seems to slow down for Martial. Whenever he has the ball, he seems to have so much time. His first touch is always spot on and sets himself up for a comfortable finish. Many other strikers would swipe at a first-time finish Martial takes his time and steadies himself. Now, this can sometimes lead to opportunities being crowded out and defended. 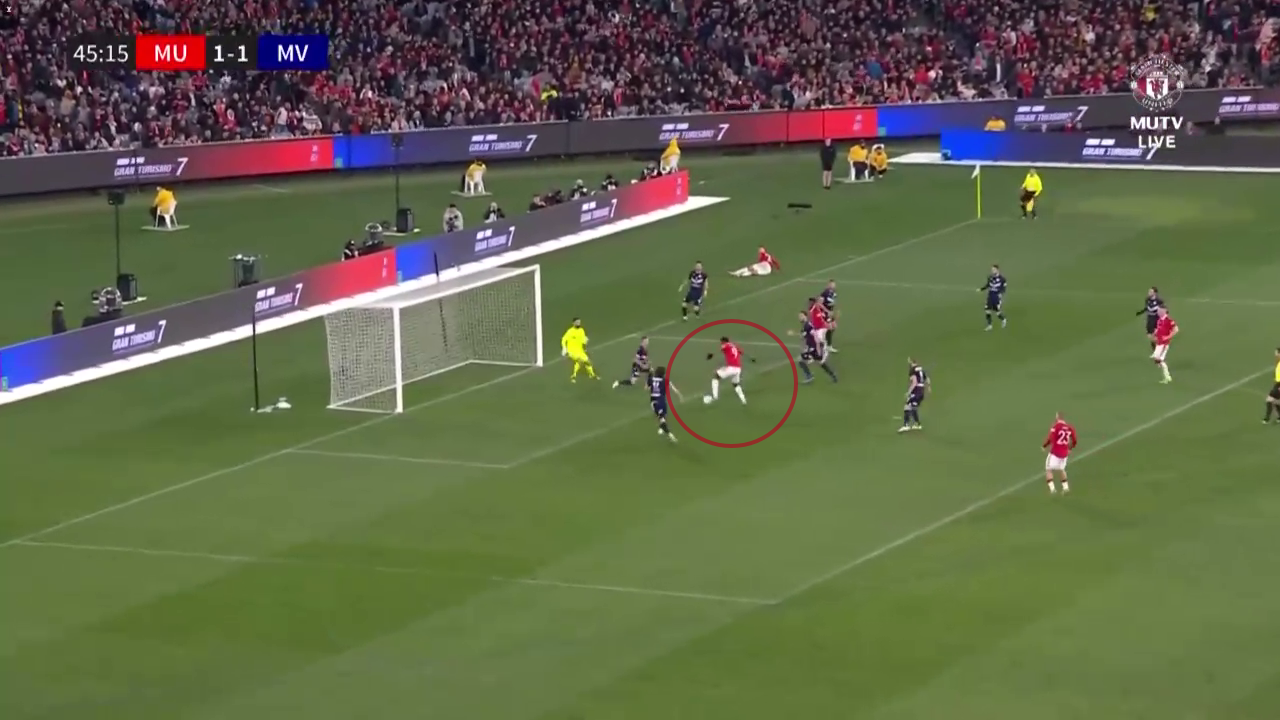 Martial can be seen taking a touch in what seems an overcrowded, high-pressure area. The Frenchman is able to set himself before dispatching the chance easily. His ability and control inside the box is something which all good strikers need, something that perhaps other United attackers lack.

No Manchester United fan is expecting Martial to fill the boots of the potentially departing Cristiano Ronaldo, but Martial is looking sharp and can potentially make a positive impact on this side. His newfound confidence and a fresh start under ten Hag can only be welcomed at Old Trafford, where for seven seasons, United fans have waited for Martial to fulfil his potential.

The Frenchman will be looking to have a good start to the season with the Qatar World Cup taking place in November. A positive start to the campaign could see him kick on in United colours. Perhaps the style of play introduced will be better suited to the Frenchman’s strengths than previous managers.

It’s an exciting season ahead at Old Trafford as United seem to have found their attacking swagger.