Less than a week after his tactics beat Jose Mourinho’s Tottenham, Ole Gunnar Solskjaer was tasked with facing Pep Guardiola’s defending champions. Despite being so dominant for most of the Premier League era, Manchester United have fallen short of the standard set by this current Manchester City squad. But alas, Solskjaer managed to beat a second managerial juggernaut and won the Manchester Derby 2-1.

While scoring two goals against the 2018/2019 winners was impressive on its own, it was arguably the titanic effort from Solskjaer’s defenders that won them the game. The defensive effort wouldn’t have been as effective if not for Aaron Wan-Bissaka. After making a move from Crystal Palace to United in the summer, the young full-back has been a welcome addition to the Red Devils. But it was in this match that the young Englishman showed his true potential to his new supporters. This tactical analysis and performance review will break down Wan-Bissaka’s performance and look at the aspects of his game that shone the brightest.

Wan-Bissaka was a defensive powerhouse in this match. He successfully won nine defensive duels and attempted a whopping 17. He won two sliding tackles and made seven recoveries. Amazingly these numbers pretty much match his season averages for the last two seasons.

While these numbers are impressive, they only tell half the story. The characteristics that make him such a good defender can’t be seen in the statistics. They are merely a result of his brilliant style of play. In the remainder of this tactical analysis, we will observe the aspects of Wan-Bissaka’s game that make him such a nuisance for wingers like Raheem Sterling.

If you were to ask fans from the street what aspect of Wan-Bissaka’s game impressed them the most, they would probably say it is his ability to win tackles. And while we will be discussing his impressive 1v1 defending later in this analysis, we must rewind the highlight reel to the moments before Wan-Bissaka even engages with the defender.

In the following scenario, we can see Rodri attempt to play a ball over Wan-Bissaka’s head into space for Sterling to run onto. But we can also see Wan-Bissaka starting his recovery run into this space before the ball has even been kicked by Rodri. Not even Sterling starts his run before Wan-Bissaka closes down the space. This awareness from Wan-Bissaka gave him an extra half a yard on Sterling to intercept the pass and make the clearance. 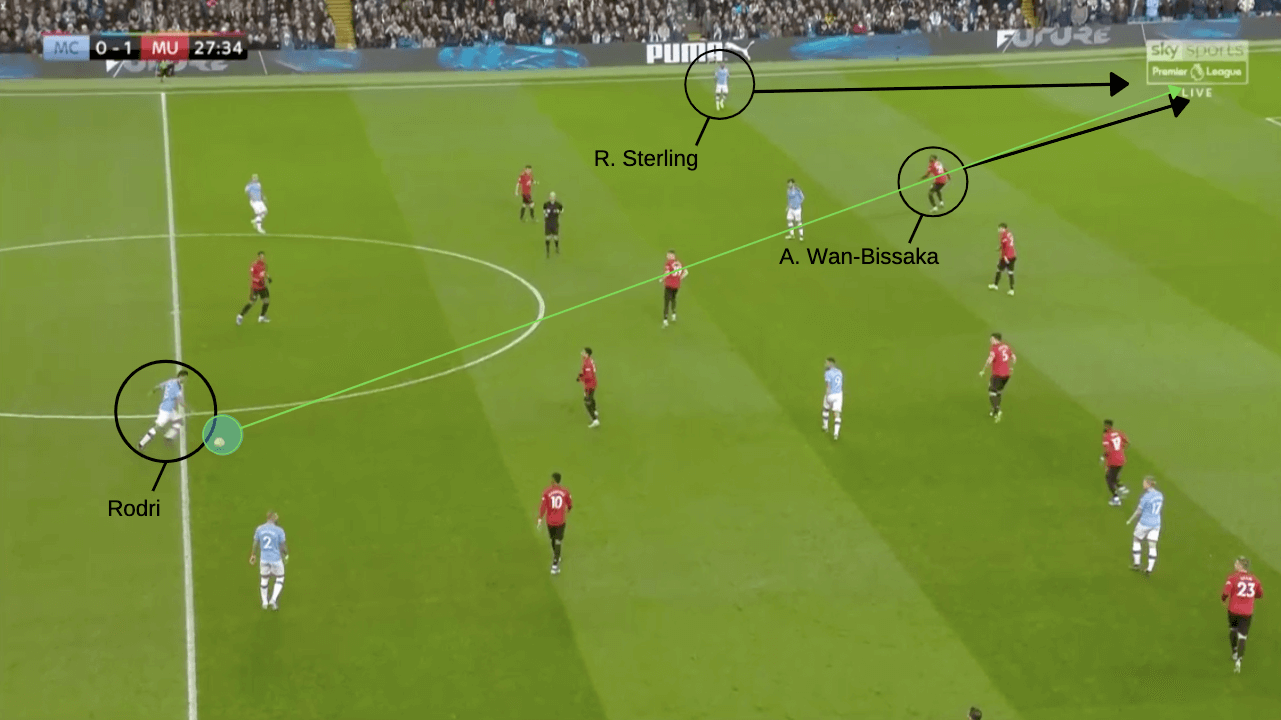 This awareness also contributed to his ability to make crucial interceptions. In the following passage of play we can see Kyle Walker progress the ball down the right side of the field. The United defence, including Wan-Bissaka, are compact and pushed over to that side of the field. This allows Sterling to occupy the acres of space available on the left. But as we can see in the image below, Wan-Bissaka is fully aware of Sterling’s position at all times. 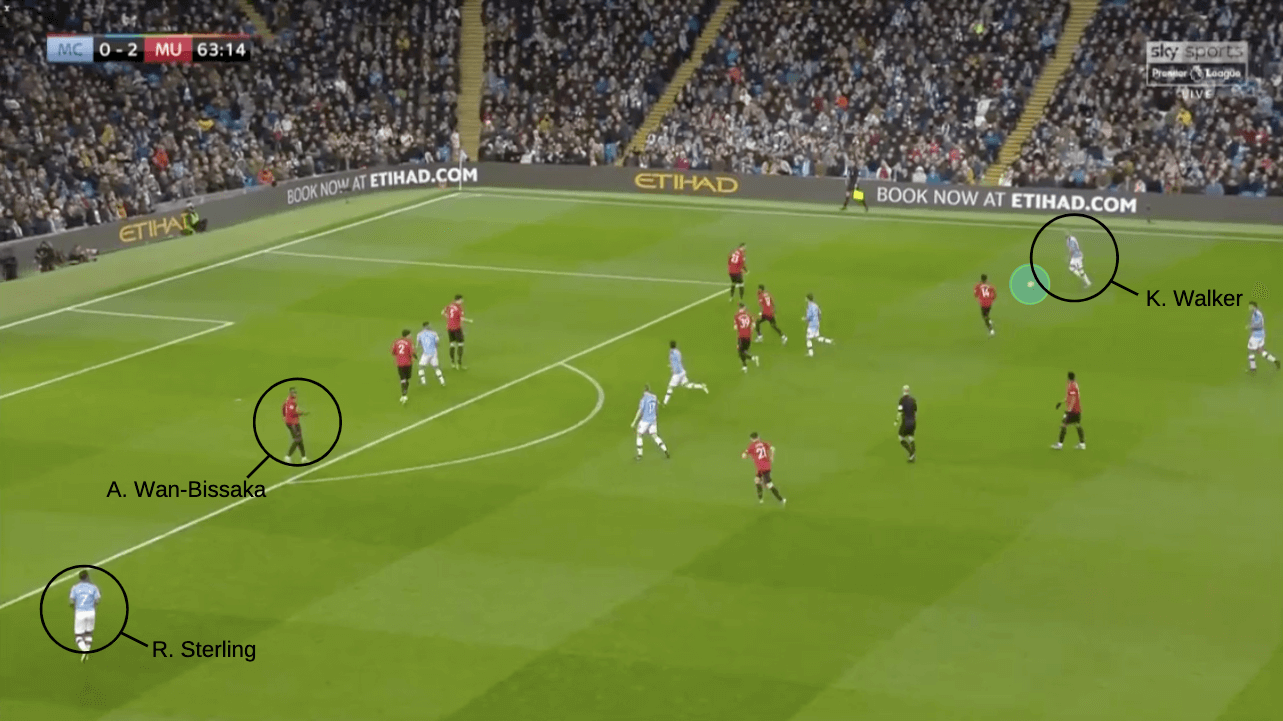 Then, as a low driven cross is played into the back post, Wan-Bissaka steps in and intercepts the pass. This interception was crucial, as the cross could have landed at either David Silva or Sterling’s feet. 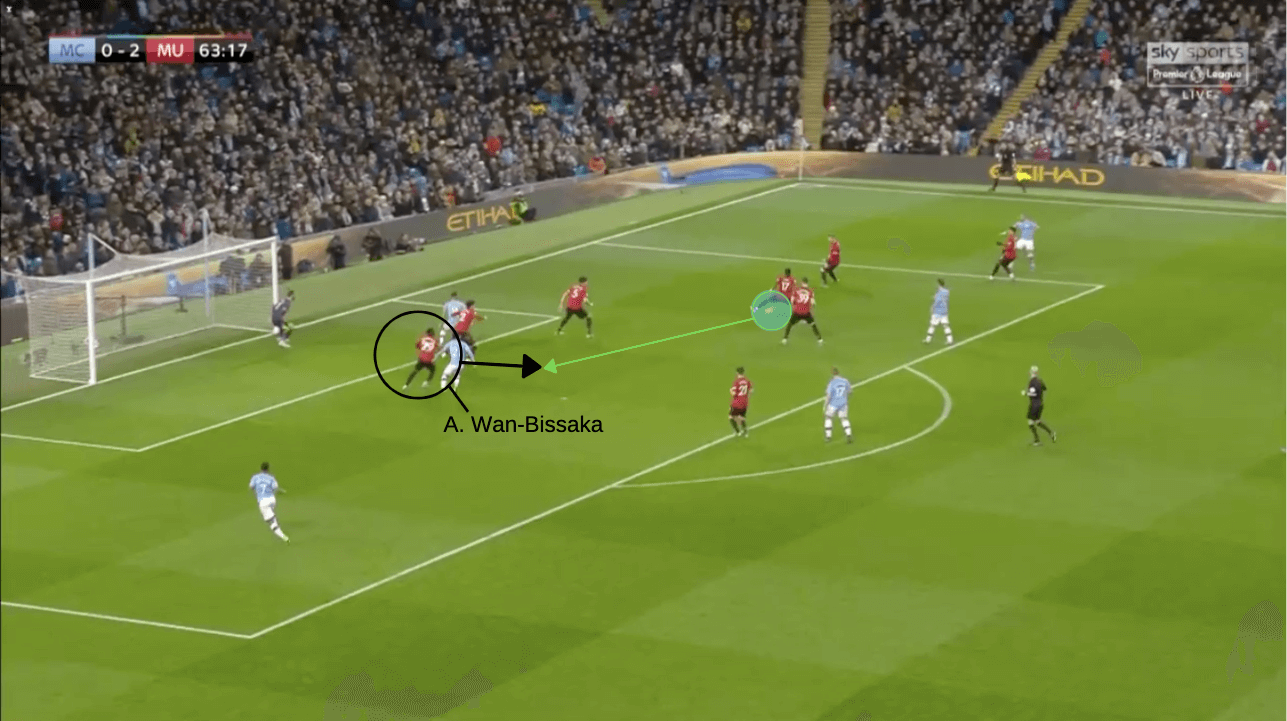 This positioning not only prevented a goal-scoring scenario but neutralised the treat of two City players. Had the cross from Walker been lofted towards the back post, Wan-Bissaka could have also recovered to that position quickly.

We can see an example of this below when Kevin De Bruyne passes the ball to Sterling in space. Instead of rushing out, Wan-Bissaka holds his central position and delays Sterling’s progression. This allows his centre-backs, and midfielder Scott McTominay, to recover to a deeper position. 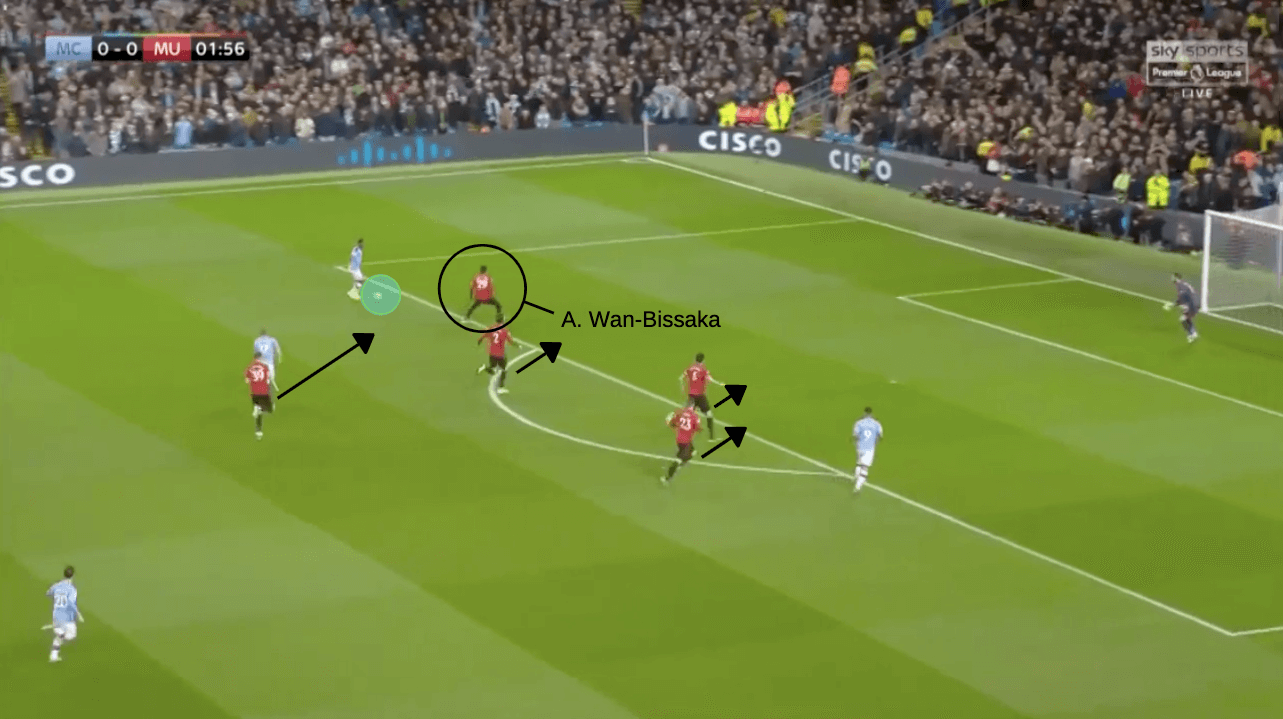 Noticing the space behind Sterling, De Bruyne overlaps his winger. By allowing himself the time and space, Wan-Bissaka easily reads the play and steps in to block the Belgian’s shot. His patience to delay Sterling, and to refrain from diving in, was crucial in this passage of play as well. Had McTominay not been afforded the time to recover, Wan-Bissaka would have been defending two players at once. 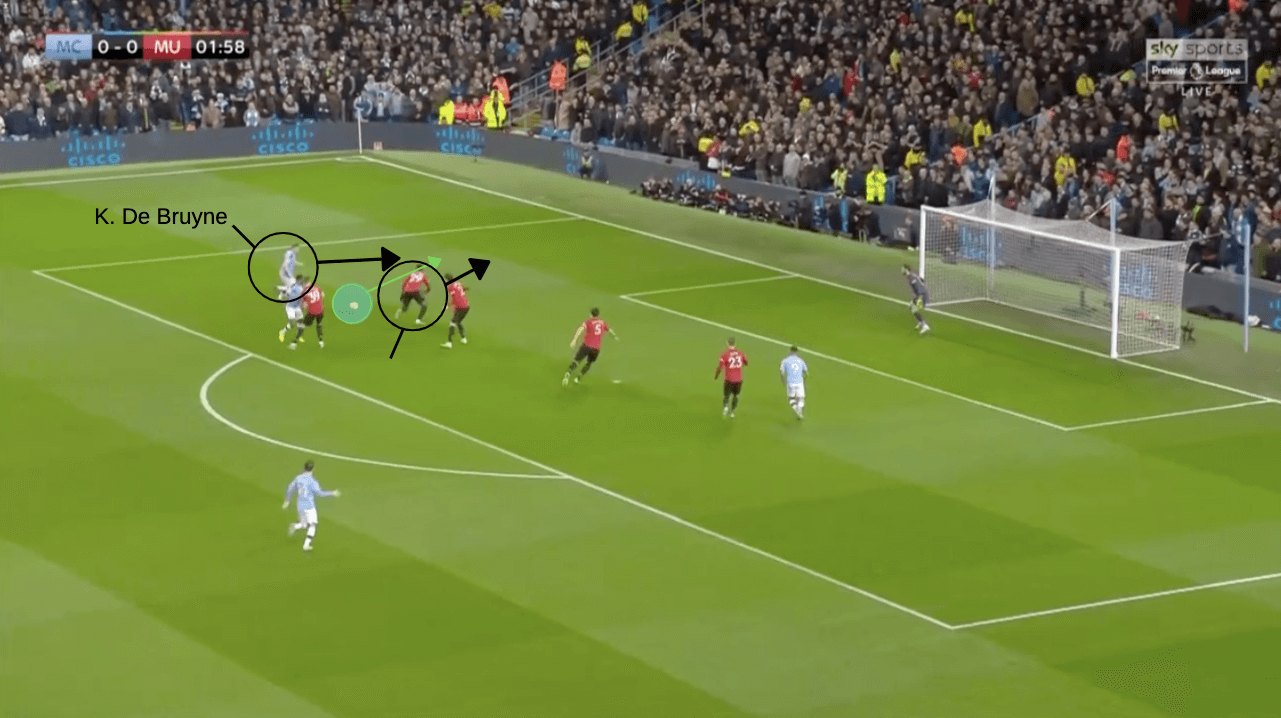 He utilised this tactic many times during the match. Instead of rushing out to the ball carrier, Wan-Bissaka forced the attacker to run at him and beat him. As a superb 1v1 defender, which we will discuss in the next section of this analysis, the young English right-back was unphased by players dribbling towards him.

Part of the reason Wan-Bissaka wasn’t concerned with attackers running at him was because of his incredible 1v1 defending. What makes him so effective at defending is his ability to quickly shift his position from one direction to another. If an attacker takes him one direction, he can quickly recover if they take the ball back the other way. By getting down low, Wan-Bissaka always follows the ball. He won’t dive in when an attacker jukes their shoulder but instead reacts as soon as the ball is moved.

His long legs are also so difficult to pass. This has earned him the nickname ‘The Spider’ amongst fans. In a defensive duel against Sterling (32 minutes and 40 seconds into the match) Wan-Bissaka is able to reach his legs behind him and scoop the ball out of Sterling’s path. These kinds of tackles make Wan-Bissaka seem clumsy and unorthodox, but in reality, they are super effective. In fact, it’s his unorthodox approach that makes him such a pain to attackers.

The utilisation of his long and gangly limbs also helped him get in the way of shots as well. If a player attempted to find space to shoot, Wan-Bissaka was capable of lunging into the path of the shot and deflecting the ball. While he wasn’t the only player to deflect the ball out for a corner, Wan-Bissaka was a big reason that Manchester City earned 16 corners during the match and that David De Gea only needed to make four saves from 23 City shots.

This defensive style is not a characteristic specific to Wan-Bissaka in this one match in particular. It is something that Wan-Bissaka has been known for over the last couple of seasons. But in this game, it was even more noticeable because of how many times he had to do it.

There is no doubt that the Manchester United backline worked as a cohesive unit during this match. They worked together to prevent Manchester City from scoring multiple goals by being disciplined and by staying compact. But without Aaron Wan-Bissaka, there is a very good chance Raheem Sterling would have wriggled his way through the United defence. For £50 million, Wan-Bissaka wasn’t a cheap purchase for Ole Gunnar Solskjaer. But in this Manchester Derby, the Englishman showed exactly why Crystal Palace demanded such a high fee, and why Manchester United were so willing to pay it.

His awareness of the players around him and the movement of the ball helped him predict and anticipate the Manchester City players’ next moves. He was then able to delay the progression of the ball by jockeying the oncoming attacker before inviting a 1v1 battle, which he was confident in winning.