Both Charlton Athletic and Hull City came into this Friday night clash off the back of midweek defeats. Lee Bowyer’s men lost late against Huddersfield, whereas Hull were defeated by table-topping Leeds United at Elland Road.

After a relatively good start, the Addicks’ form has dropped off a cliff. They’ve now not won since the 19th October and have lost their last four coming into this game. Sitting in 17th place, with only a four-point buffer to the relegation zone, this match at home to a side only three places above them provided an opportunity to get themselves out of this rut.

The best word to describe Hull’s season so far is probably inconsistent. The Tigers have swept away high-flyers, such as beating Fulham away 3:0 and Preston North End at the KCOM Stadium 4:0. However, poor results such as losing at lowly Barnsley has meant their play-off push has not been properly sustained.

In this tactical analysis, we will look at the tactics in this EFL Championship match, and also use analysis. 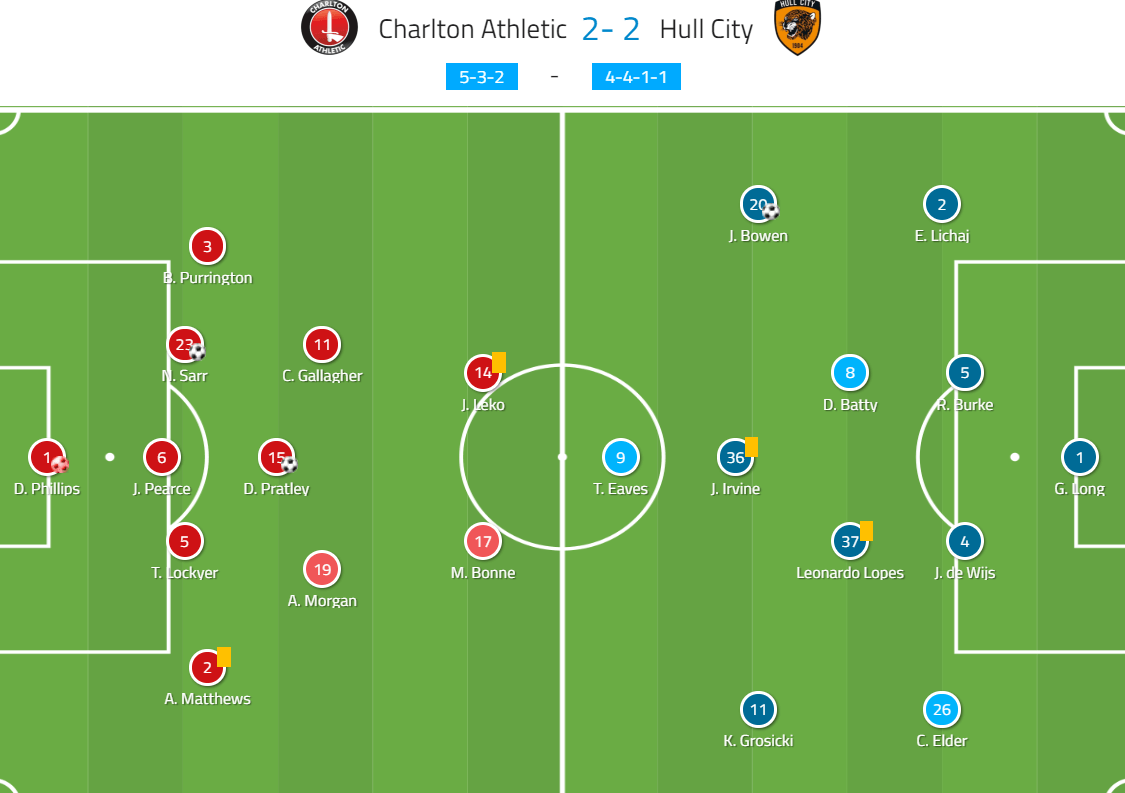 The home side made a total of two changes for this game. Whilst sticking to 3-5-2 Bowyer brought in Adam Matthews at right-back and Alfie Morgan as a central midfielder. Talismanic striker Lyle Taylor remained on the bench after only recently returning from injury. New free agent signing Joe Ledley also had to settle for a place on the bench.

Grant McCann opted to keep the same 11 that narrowly lost at Leeds three days before. The topic of much transfer speculation Jarrod Bowen kept up his phenomenal goalscoring form here. Kamil Grosicki is also a threat at left-wing, both wide players offer a great deal of potency.

McCann adopted a linear structure when trying to progress the ball vertically from deep. The away side tended to have a box shape. With Charlton only playing two main forward players in Macauley Bonne and Jonathan Leko the Tigers could easily outmanoeuvre them and thus bypass the first line of pressure. However, Bowyer’s own tactics nullified this strategy – we’ll come onto this later. 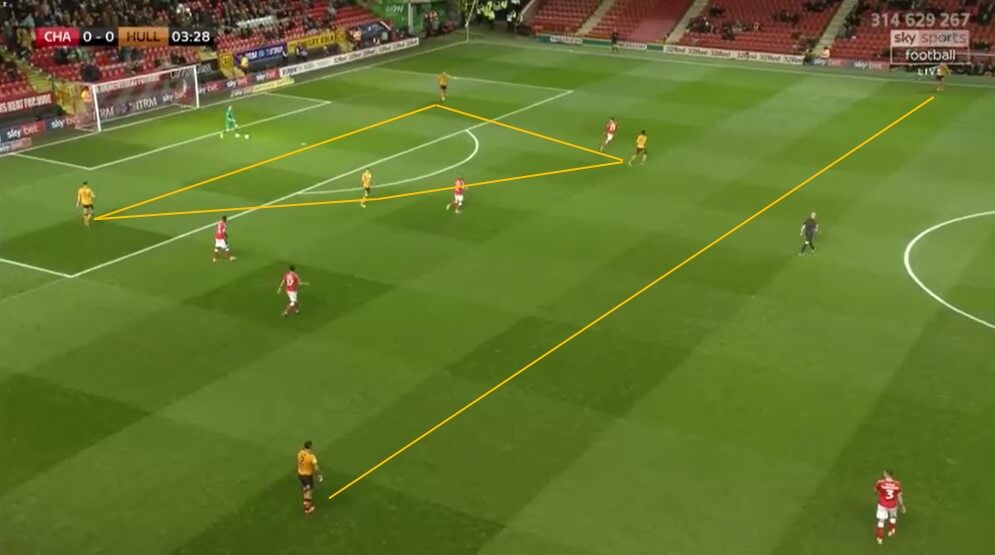 The aim of this deep build-up was to tempt Charlton into pushing on. This would leave gaps in behind to be exploited by the dangerous pace and dribbling ability of Grosicki and Bowen. The deeper positioning of the full-backs emphasised that they were attempting to incite the Charlton wing-backs to come out and press, leaving the wide spaces empty. The two wingers sat in the respective half-spaces to offer additional passing lanes and also be in a good position to receive and drive. This would also act as a dilemma for the Addicks wing-backs. They could hold back and be forced into a 2v1 overload or come out for one of the attacking players to potentially profit from.

Jackson Irvine typically had Darren Pratley marshalling his movements. However, due to the man-orientated nature of Charlton defensive scheme, the Australian could use this to his advantage.

A primary objective of Hull’s tactics – as I’ve implied – is to maximise the front three’s space and then attack an isolated defence. Irvine dropping deep seems harmless but by taking away usual protector Pratley – with the wing-backs advanced as well – it can result in a fragile backline being properly exposed. All too often though the execution for that incisiveness ball was poor. We can see an example of this ideal situation below.

Leonardo Da Silva Lopes gave the Tigers midfield added dynamism, energy and ball-carrying. The Portuguese youngster has impressive resistance to being pressed and gets the ball up the pitch and away from trouble with a calming simplicity. Four of his six attempted dribbles were successful and he also won nine of 16 contested ground duels.

Hull did go long into Tom Eaves when necessary but it was the home side who were the more direct. Unlike their counterparts the home side didn’t go straight into a striker – Bonne is only 5” 6’. Instead, the Addicks knocked the ball into the channels for the pacey Bonne and Leko to chase onto and hold up or pester any retreating Hull defenders.

The roles of the three midfielders were split into two. Pratley, with his experience, shepherded the middle third and acted as a metronomic pivot, whereas Morgan and Conor Gallagher had the license to push on and support Bonne and Leko in the final third. Because the wing-backs are the sole natural source of width it is routinely left for these two to move laterally to help with combination play – especially Gallagher. 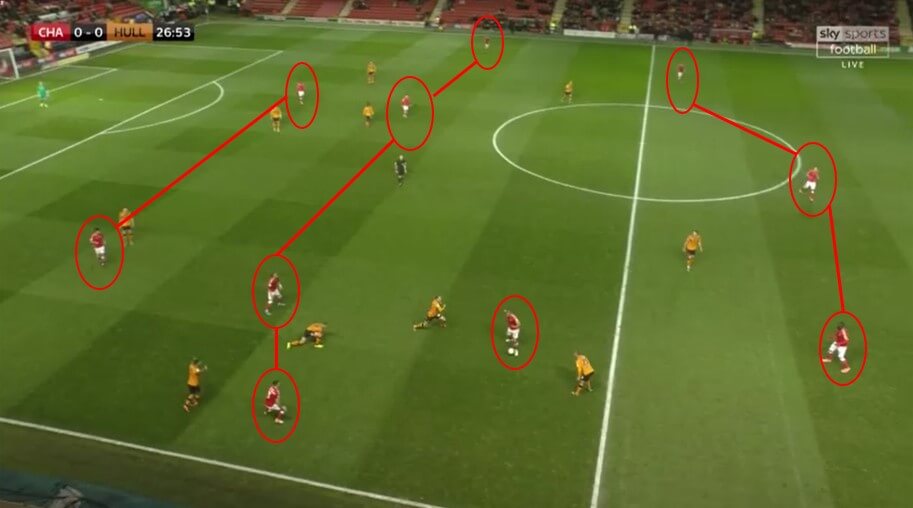 The Chelsea loanee has been very impressive in his first few months at the Valley. Just like Chelsea legend and manager Frank Lampard he loves to get on the end of cut-backs. As I’ve mentioned Gallagher has a freer, but important role to avoid the Charlton attack becoming too centralised and predictable. In this game, despite playing as a central-midfielder he recorded eight crosses, one key pass and one big chance created. This shows his importance in the creation of chances.

An interesting second half

After just two minutes Hull got their equaliser. The tactic of overloading the wing-back paid dividends. Left-back Callum Elder gave an attacking underlap rarely seen in the first 45, momentarily distracting right-wing-back Matthews and allowing Grosicki half a yard of space to whip a dangerous ball in – which of course Bowen duly dispatched at the far post. 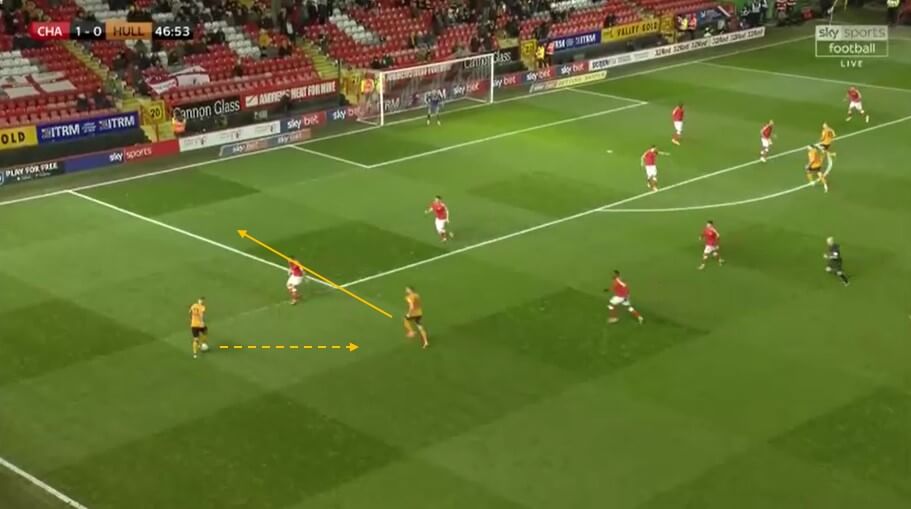 Charlton’s second goal scorer was centre-back Naby Sarr, scoring from a counter-attack he himself started. The Senegalese international is prone to an adventurous foray forward. Sarr is known to push on past his designated left-centre-back position to the halfway line and interchange with the chosen left-wing-back and Gallagher. For this goal, though it must be said the fact he eventually tapped-in was much to do with the away sides dreadful, oblivious defending, and it was with the 26-year-old’s attacking instincts.

This 50th minute goal for Charlton to regain the lead meant, the team from Yorkshire became the dominant, controlling side for the remainder of the game. A key factor in why the Addicks failed to hold on was their inevitable, unsuccessful fall into a low block. To be fair, it is understandable, with three centre-backs playing the home side seemed well-placed to resist sustained attacks and aerial bombardment.

In searching to get back into the game once more Hull continued to be a wing-orientated side. Josh Bowler, another winger, had already been introduced by McCann at half time – which shifted Bowen into a central, more proactive role in the 10 area. In addition to this McCann brought on academy graduate Keane Lewis-Potter – to inspired effect. The reason for these changes was to get the ball out wide and try to overload the wing-back or cause an imbalance in the Charlton defensive set-up, whilst still getting men in the box to get on the end of crosses or attack the second ball. We can see the overall structure of the Hull second-half attack below.

Throughout the second half, the attacking intent was significantly favoured towards the away side. The Tigers made: 19 crosses (Charlton did none); over 100 more passes than Charlton; had 12 shots; and seven corners. It would be naive to attack excessively when you’re winning an important game but to retreat so far and not try to put Hull on the backfoot for any extended period of time eventually cost the Addicks.

For the last-minute equaliser left-wing-back, Ben Purrington was isolated at the back-post, plus Lewis-Potter got a run on him, and then outjumping and overpowering Purrington to take a point back up north.

After responding so well to an equaliser so quick into the second half Bowyer’s side will be devastated to drop points because of a late goal again, after the Huddersfield game. In truth, both teams were pretty flat and lack ability and invention. Usual star Bowen was unusually quiet despite his goal and never really got going.

Hull will hope their late goal can inject some forward momentum into their season and ambitious push for a play-off place. Charlton, on the other hand, needs to pick themselves up and avoid dropping any further, starting with a trip across London to QPR.